An important new book details the carefully calculated rise of a modern-day tsar.

The best one-line insight into Vladimir Putin I ever heard was from my friend’s father, a former Soviet dissident. A beatnik in 1960s Leningrad, he experienced at first hand the operating practices of the KGB, the Soviet Union’s feared security service. It was in the same organization that Putin spent the defining years of his youth, before he entered politics and embarked on his dizzying rise to the presidency. The Russian leader’s KGB past means he will always have the mindset of a spy, my friend’s father explained one evening. “Putin cannot be bent,” he said, “but he can be broken.”

Few people have told the story of how the KGB shaped Putin and modern Russia as well as journalist Catherine Belton in her new book, Putin’s People: How the KGB Took Back Russia and Then Took On the West. Belton argues that Putin has never been “bent” from his mission to restore the power of the KGB, which once seemed to have been consigned to history alongside the Soviet Union. And she traces the careers of Putin and his associates from mid-level spies in the 1980s, through the upheaval of the 1990s, to the very top of Russian politics and business. They have forged a system, Belton argues, that uses the KGB playbook to keep a tight grip on power, manipulate hundreds of billions of dollars in money flows, and spread Russian influence deep into the West. 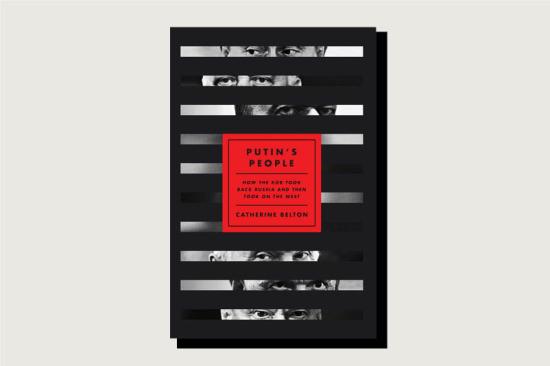 The coronavirus outbreak is an apt moment at which to look at Putin and his regime. Economic hardship and uncertainty have pushed Putin’s approval ratings to their lowest level in two decades, creating one of the biggest crises of his presidency and raising questions about his political future. As the Russian leader struggles to ride out the storm, Belton’s analysis is a fascinating window into the group of men (they are almost all men) who wield power in the Kremlin. Compellingly written and meticulously researched, Putin’s People looks set to become the definitive work on the enduring influence of Russia’s spies.

To understand Putin’s modus operandi, Belton suggests you have to go to the East German city of Dresden, where Putin was posted as a foreign intelligence officer in 1985. Although most accounts of this period of Putin’s life state he did little more than learn German and drink beer, Belton paints a very different picture. Putin, she says, was involved in running agents, recruitment, technology theft, and even the management of left-wing terror groups that carried out assassinations on the other side of the Iron Curtain. At the same time, Putin was privy to measures taken by the KGB to preserve its influence in case of the collapse of the Soviet empire, which was anticipated by some far-seeing officers. In the main, this meant setting up slush funds with “trusted custodians” and “friendly firms” and establishing complex smuggling schemes and networks of agents abroad. What Putin and the KGB were up to in the 1980s, Belton argues, is “a blueprint for everything that was to come later.”

The signs may have been there for decades, but the KGB’s continuing influence only came to the attention of most in the West in 2016 with evidence that Moscow had intervened on behalf of Donald Trump in the U.S. presidential elections. Belton dives deeply into the world of the post-Soviet hucksters who surrounded Trump long before his White House bid, identifying their ties to Russian intelligence and how they used KGB tactics to entangle the future president in a web of financial obligation. “In the beginning, Trump’s business was probably no more than a convenient vehicle through which to funnel funds into the U.S.,” writes Belton, as she traces his contacts with figures like construction tycoon Agas Agalarov, antique smuggler Shalva Tchigirinsky, and oil-trader Tamir Sapir, who all “operated in the half-light between the Russian security services and the mob.” Gradually, these relationships deepened, and Belton suggests that “at some point Trump became a political opportunity.”

This is not, however, a book solely about Russia’s espionage operations abroad. As the title suggests, the main focus of Putin’s People is the cast of powerful businessmen and officials at the heart of the Kremlin—and what they do with their money and influence. Unsurprisingly, almost all of Belton’s characters have KGB backgrounds. There is Igor Sechin, a former KGB agent in East Africa who worked as Putin’s secretary in the 1990s (Belton recounts an anecdote in which he solicits a $10,000 bribe for his boss) and is now the head of state-owned oil giant Rosneft. There is Gennady Timchenko, who studied German with Putin in KGB training school before moving into oil trading and amassing a $14 billion fortune. And there is Andrei Akimov, a one-time Soviet intelligence operative in Vienna who became a key player in the state’s seizure of private oil company Yukos and the labyrinthine financial schemes used to skim off billions of dollars from gas export deals.

But Belton goes further, showing how even those billionaires who are often seen as more independent are inextricably tied to the Kremlin. She recounts how the owners of privately held Alfa Bank, Mikhail Fridman and Pyotr Aven, employed the relatives of East German spy acquaintances of Putin and how Putin told billionaire Roman Abramovich to buy London soccer club Chelsea in 2003. The subservience of Russian business has even been on display during the coronavirus outbreak as the authorities lean on the superrich to provide tens of millions of dollars to boost the capacity of the health care system.

If Belton overreaches in her portrayal of Putin’s Russia, it is perhaps to attribute too much influence to the KGB and Russia’s post-Soviet spy agencies. She explains the collapse of the Soviet Union as an “inside job” by KGB men and Putin’s rise to the presidency as a carefully planned KGB operation. In both cases, these were complex political processes involving far more than just the machinations of a cabal of spymasters. Belton also uses anonymous sources and circumstantial evidence to give new credence to some of post-Soviet Russia’s darkest rumors: that Putin was implicated in the murder of his 1990s boss Anatoly Sobchak, and that his ally Nikolai Patrushev organized the 2002 terrorist siege of a Moscow theater, in which at least 170 people were killed, to cover Putin in blood and “tie him to the presidency.” There is no reason to doubt the ruthlessness of one-time KGB officers, but Russia’s security services are far from omnipotent. Corruption, incompetence, and coincidence are also aspects of Russian politics.

Far more compelling is Belton’s exposure of how the Putin regime manipulates the economic system to amass personal fortunes for his inner circle, create secret funding “war chests,” and finance influence operations abroad. Through numerous conversations with bankers, Kremlin sources, and former spies, Putin’s People shows how the Russian leader’s associates gradually took over the Russian economy by stripping assets from state-owned gas monopoly Gazprom, creaming off money from energy exports, and creating financial giants, like insurance company Sogaz and Bank Rossiya, tightly controlled by Kremlin insiders. Belton argues convincingly that this process was abetted by many in the West, who believed that integrating Russia into global financial markets would bring the country into the fold after the end of Communism. Instead, the foreign listing of Russian companies and the kowtowing by Western lawyers, financiers, and officials simply enriched those close to Putin, entrenched a version of state capitalism, and, ultimately, held back the country’s economic development. Bankers in the U.S. and Europe were “blinded by the flood of cash,” Belton writes. “Putin’s men had accurately calculated that, for the West, money would outweigh all other concerns.”

By the time Russia’s relations with the West collapsed in the wake of Moscow’s 2014 annexation of the Ukrainian region of Crimea, Putin’s grip on the Russian economy was almost total—the West had lost its chance to shape the Putin system. “It’s all Putin’s money,” Belton quotes one banker as saying. “When he came to power, he started out saying he was no more than the hired manager. But then he became the controlling shareholder of all of Russia.” Some of this money has financed a life of luxury for Putin and his closest allies, but according to Belton, much of it was also funneled abroad, hidden from democratic oversight, to undermine institutions in the West—from U.S. elections to the United Kingdom’s Brexit vote in 2016 and fringe political parties in Europe. Putin’s KGB men have $800 billion “stashed away in offshore bank accounts,” according to Belton.

Earlier this year, Putin announced a series of constitutional changes that will allow him to remain president until 2036, effectively transforming him into a modern-day tsar. But what will be the fate of Russia’s KGB regime? Will it endure beyond Putin’s death, or is its end much nearer at hand? Could, as my friend’s father once put it, Putin be “broken”?

There are few signs of any imminent political collapse or that Putin is close to being “broken” by either domestic rivals or a foreign plot. But the coronavirus crisis has made Putin appear more vulnerable than many observers can remember, and his approval ratings continue to drop. The Kremlin’s political plans have been upended: A constitutional referendum was postponed and landmark events to mark the 75th anniversary of the Soviet Union’s victory over Nazi Germany partially canceled. Belton offers a few tentative predictions about the longevity of the regime in Putin’s People, suggesting that Putin is doomed to repeat the mistakes of his KGB predecessors. The rule of Putin’s KGB men is “calcifying,” she warns, and faces the real risk of “becoming more brittle by the day.”

Howard Amos is a journalist and analyst focusing on Russia. Twitter: @howardamos

New surveys show a surprising decline in the Russian president’s popularity. The pandemic will accelerate a trend of mistrust in the Kremlin.