Erdogan Should Not Erase Turkey’s Christian Past

The Turkish president wants to turn Istanbul’s Hagia Sophia back into a mosque. Destroying its dual Orthodox-Islamic heritage would be a blow to religious pluralism and tolerance.

Istanbul’s Hagia Sophia was, for nearly 1,000 years, the largest and most important house of Christian worship in the world until it was converted into mosque in the 15th century. The building, now a museum, is still filled with priceless Christian mosaics and frescoes. It is also one of the most contested religious buildings in the world.

On July 2, the Turkish high court will rule on President Recep Tayyip Erdogan’s request to annul the 1934 decree that turned Hagia Sophia from a mosque into a museum. If the court says yes, the decision will reverberate across the world.

Erdogan has consistently expressed his desire to return Hagia Sophia to its previous status as a mosque. This stance plays well with his pious political base. Now he seems to be in a hurry; his hand-picked Presidential High Advisory Board discussed the matter on June 16. If the court decides to annul the 86-year-old law, some advisors are hoping that Islamic prayers could be held in the mosque on July 15, the anniversary of the failed coup against Erdogan’s government in 2016.

For Erdogan, the politics here are irresistible. It is hard to imagine a more powerful image of Islamification than to see him leading prayers in a building converted from an Orthodox Christian church into a mosque in 1453 by Ottoman Sultan Mehmed II after his conquest of Constantinople. For Erdogan it would be a huge symbolic step toward bolstering his religious nationalism. But for many others, including Turkey’s tiny Christian minority and millions of other Christians around the world, it will be a disturbing echo of the bloody conquests of the Middle Ages—not the peaceful coexistence most people aspire to in the modern world.

Kemal Ataturk, the first president of Turkey, secularized the building and reopened it as a museum in 1935 precisely in order to help create a modern Turkey—and to curry favor internationally, including better relations with Greece. Ataturk knew how important the Hagia Sophia was to Orthodox Christians. As the historian Diarmaid MacCulloch has observed, “Orthodoxy has to a remarkable extent been moulded round one single church building…. the Cathedral of the Holy Wisdom (Hagia Sophia).”

After being consecrated in 537 during the reign of the Eastern Roman Emperor Justinian, the cathedral was the seat of the ecumenical patriarch, leader of the Eastern Orthodox church, for a millennium. The Russian Orthodox Chruch already announced its uneasiness, saying that any attempt to convert the bullding into a mosque will hurt “fragile inter-confessional balances.” And the Greek culture minister sounded alarm with UNESCO to help protect the “universal character” of the Hagia Sophia.

Ataturk also knew that religious people have long memories, and that Hagia Sophia remained a source of contention between Christians and Muslims. Following Turkey’s defeat and occupation after World War I, a Greek priest recklessly performed a communion service in the mosque. He barely escaped with his life.

Now the fragile peace achieved by secularization may be shattered. No one knows what the court will decide. But recent precedent looks hopeful for Erdogan. In November 2019, the court considered an almost identical case regarding the Church of the Holy Saviour, also known as the Chora Church, a few miles away from the Hagia Sophia in Istanbul.

Like the Hagia Sophia, the Chora church was converted into a mosque, in the 16th century, before being converted to a museum, in 1948. In its ruling the court found the redesignation into a museum unlawful because a mosque “cannot be used except for its essential function.”

Indeed, many people who visit the Chora church or the Hagia Sophia will agree something important is lost when ancient houses of worship, of whatever faith, are hollowed out into museums, full of tourists listening to audio guides. But Christians might argue that the “essential function” of these buildings predated 1453.

A complication is that both the Chora church and the Hagia Sophia are on UNESCO’s world heritage list as “architectural masterpieces.” But it is not clear what a change in status means for heritage value. Indeed, Hagia Sophia needs urgent repairs, which are more likely to be financed if it becomes a mosque again. But it’s unclear whether such repairs would protect the building’s Christian imagery, which Muslims may see as unacceptable if the building turns into a mosque.

Ataturk’s French-inspired strident secularism had problems of its own. Its excesses which included inexcusable bans on Islamic practice and dress—have been viewed by religious Turks ever since as a heinous attack on their faith. That is partly why, for decades, reopening Hagia Sophia to worship—Muslim worship—has been a dream for Turkey’s religious conservatives. It is seems that Erdogan is finally ready to take this historic step, to show that he really is making Turkey Muslim again.

The timing is not accidental. The popularity of Erdogan’s ruling party is at a two-year low—because of a declining economy, as well as appalling levels of authoritarianism and corruption. He faces new challenges by two new parties that may appeal to his own conservative base: the Future Party, led by former Prime Minister Ahmet Davutoglu, and the Democracy and Progress Party, led by former Economy Minister Ali Babacan. Since these two parties may chip away some of his religious voters, Erdogan may be hoping to position himself as the true savior of Muslims—in Turkey and even beyond.

There is a better way. Instead of this revanchist religious nationalism, there is an opportunity for a solution based on pluralism instead. The Hagia Sophia could be opened for both Muslim and Christian worship. Certainly, the building is big enough to consecrate separate areas. Thoughtful scheduling could allow services to take place at different times.

The Armenian patriarch of Constantinople, Sahak II, has already suggested a sharing solution. And Bartholomew I, the current Orthodox archbishop and ecumenical patriarch of Constantinople, said on June 30 that “Hagia Sophia belongs not only to those who own the monument, but also to all of humanity. And the Turkish people have a responsibility to highlight this universality of the monument.”

The Greek Orthodox Patriarchate is selling church land that’s ending up in the hands of Israeli settler groups. Its Palestinian Christian congregants are furious.

The Greek Orthodox Patriarchate is not deliberately selling off land to Israeli settlers. It has been the victim of fraud and attacks by Israeli extremists.

A Pope, a Patriarch, and a Missing Superpower

How did the United States find itself on the sidelines of the historic meeting between the two religious leaders?

Sharing space in this way would not be entirely novel. The Prophet Mohammed is known to have allowed a Christian delegation to pray in his own mosque in Medina. Soon after, back in the early 7th century, the Great Mosque of Damascus was shared by Muslims and Christians for a while—Muslims prayed in the eastern part of the structure and the Christians in the western side. Today, many churches are open for Muslim prayers, including the Church of the Epiphany in Washington. A church in Berlin recently opened its doors to a Muslim congregation that was too large for its mosque under the official rules on COVID-19 social distancing.

If Turkey could model such an inspiring religious pluralism, it would provide a precedent  for other significant places of worship which also have suffered conquest—or “reconquest.”

The obvious case is the great Mosque-Cathedral of Córdoba in southern Spain, which was built in the 8th century as a mosque, only to be converted five centuries later into a church. More recently, Muslim requests to worship in this magnificent building were rejected by Catholic and Spanish authorities. In 2010, two Muslim tourists even got arrested for trying to offer their prayers in what used to be one of the world’s great mosques.

This kind of narrow, zero-sum intolerance is not the way forward. Instead, political and religious leaders should champion pluralism everywhere—from Córdoba to Istanbul and Jerusalem.

No doubt many Christians and many Muslims would object to such a compromise in Istanbul, each believing that the Hagia Sophia is theirs and theirs alone. But many more would be likely to prefer it to the secular status quo. (As an Orthodox Christian and a Turkish Muslim, we certainly would.).

Sadly, Erdogan is unlikely to have a pluralist compromise in mind. Humiliating the millions of Christians who see an ancient home in Hagia Sophia may, to him, be a small price to pay—or even a bonus. 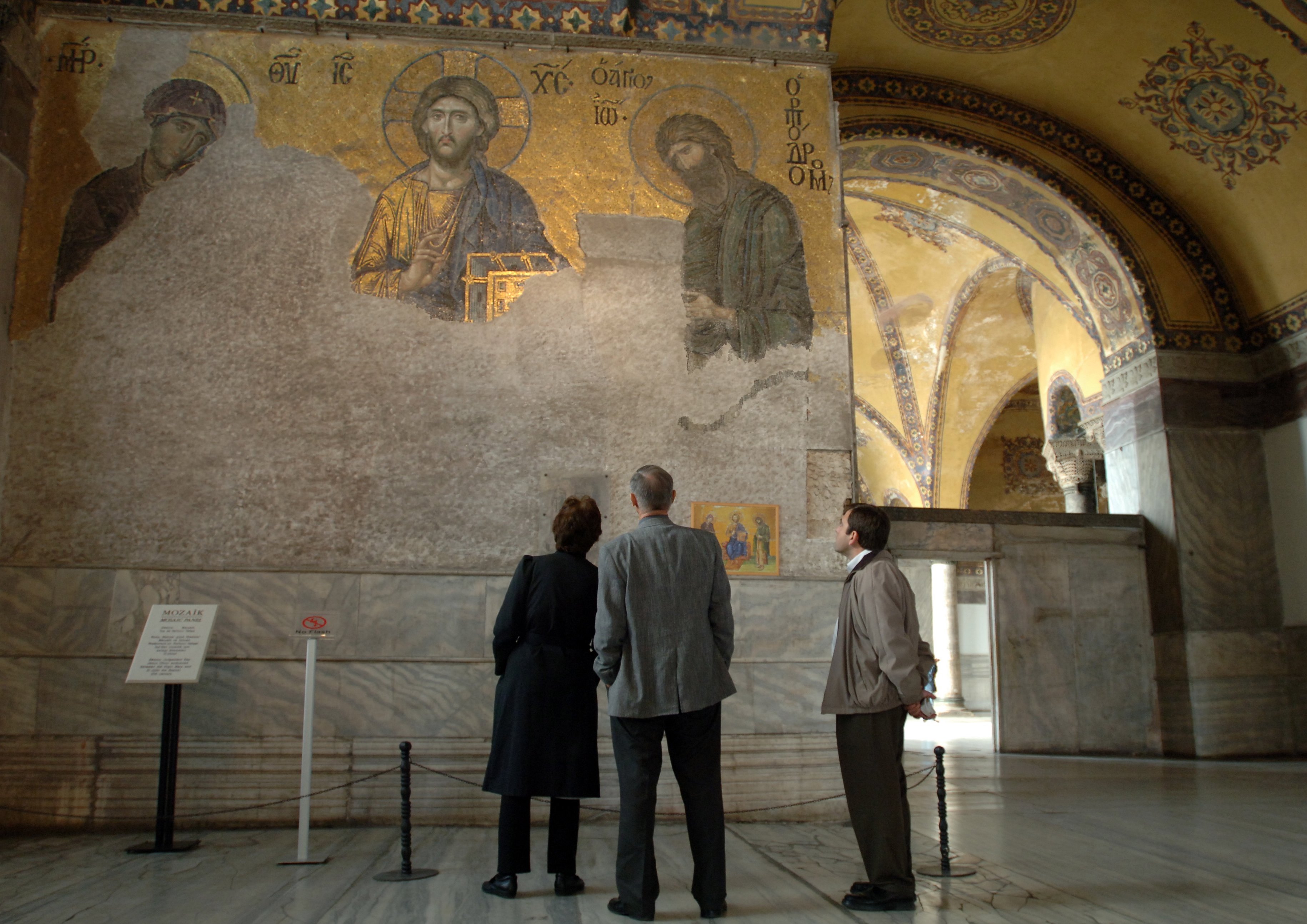 Visitors look at a mosaic depicting Christ enthroned between the Virgin Mary and St. John at Hagia Sophia on November 16, 2006 in Istanbul, Turkey. Burak Kara/Getty Images

Instead of pandering to religious voters and angering Orthodox believers across the world, on his next visit, Erdogan should instead visit Hagia Sophia’s southern gallery and look at the Deesis (Entreaty) mosaic, uncovered and restored during Ataturk’s conversion of the building. Likely dating from the 13th century, the mosaic is one of the most important surviving Byzantine works of art. It depicts John the Baptist and the Virgin Mary appealing to Christ, incidentally one of Islam’s most important prophets, to show mercy and compassion.

Such a work of art might cause even Erdogan to pause and reflect. Perhaps he will come to see the value of religious pluralism on equal grounds, one of humanity’s greatest achievements in the modern age. We can but hope—and pray.

Richard V. Reeves is a senior fellow at the Brookings Institution. Twitter: @RichardvReeves

Mustafa Akyol is a senior fellow at the Cato Institute, focusing on Islam and modernity, and the author of the forthcoming Reopening Muslim Minds: A Return to Reason, Freedom, and Tolerance. Twitter: @AkyolinEnglish

The Greek Orthodox Patriarchate is selling church land that’s ending up in the hands of Israeli settler groups. Its Palestinian Christian congregants are furious.

The Greek Orthodox Patriarchate is not deliberately selling off land to Israeli settlers. It has been the victim of fraud and attacks by Israeli extremists.

A Pope, a Patriarch, and a Missing Superpower

How did the United States find itself on the sidelines of the historic meeting between the two religious leaders?