Projections based on economic and development data show an increased risk of internal violence in fragile states driven by rising prices and falling incomes.

The coronavirus pandemic has led to over 500,000 deaths and strained health care systems worldwide. But it has also had damaging knock-on effects for the global economy and governance. One increasing risk is that these effects will lead to more episodes of large-scale internal violence, including civil war.

We have studied fragile states—countries with tenuous social contracts between governments and their citizens—for the past few years. We recently updated our forecasts of the chances that countries will experience internal wars to include the exacerbating effects of the coronavirus. We developed the forecasts using the University of Denver’s International Futures model, a statistical simulation of human and social development indicators. The model draws on the International Monetary Fund’s projected GDP growth rates while incorporating assumptions about COVID-19 prevalence and mortality. These GDP growth rates reflect declines in economic output and can affect fragility by interacting with several other significant drivers of internal war: poverty, health, trade activity, regime type, youth population size, and wars in neighboring countries. 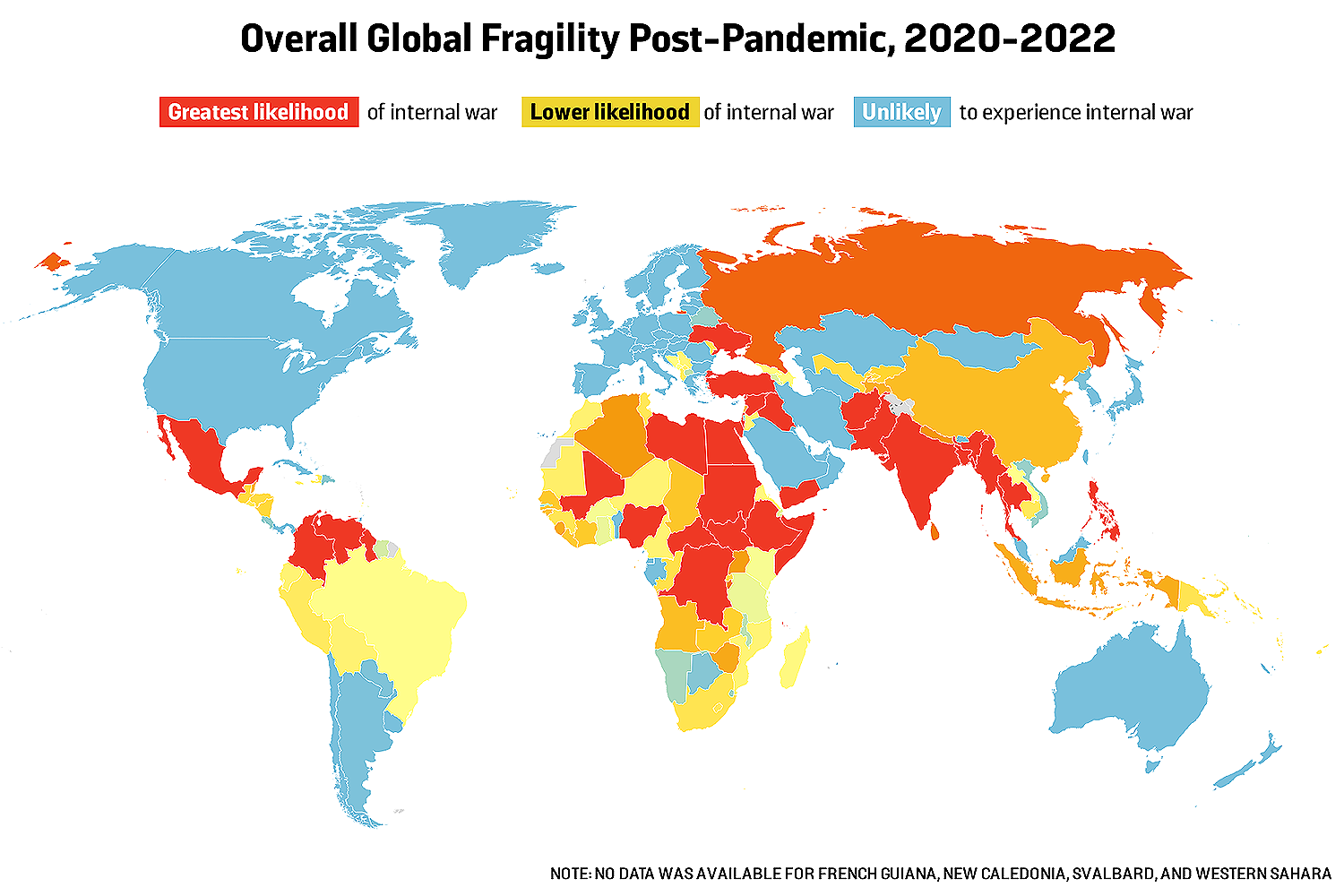 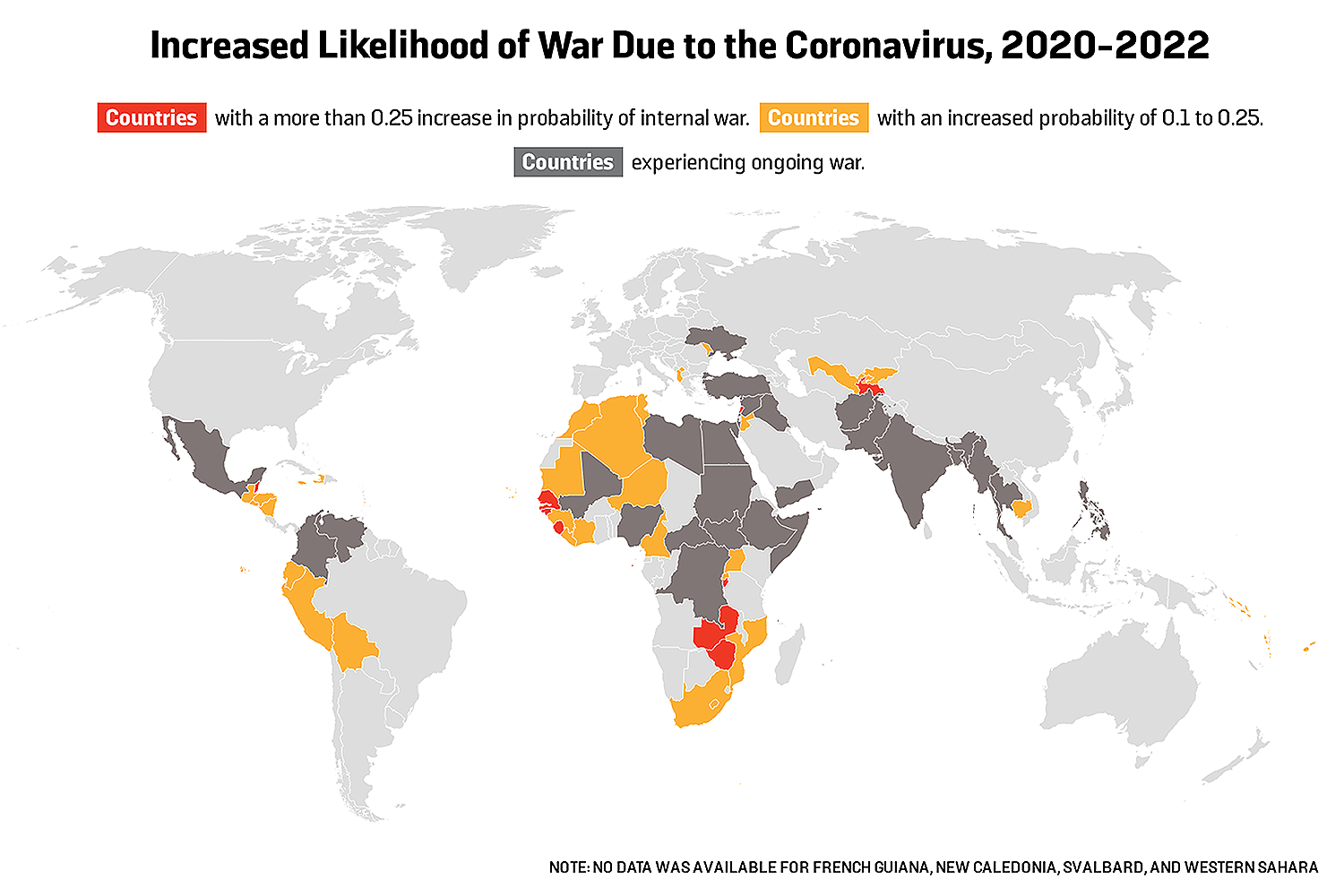 Many countries were experiencing armed conflict before the pandemic, but the previous forecasts projected the number of global conflicts to start to plateau or even decline in 2020 and continue on that path. Instead, the new forecast results from the model show that an additional 13 countries are likely to see new conflicts through 2022—an increase of 56 percent compared to the pre-pandemic forecast—due to the coronavirus pandemic and government responses, such as national lockdowns. Based on historical patterns, we now expect 35 countries to experience instability between 2020 and 2022, more than at any point over the past 30 years.

For fragile states, the consequences of the pandemic could reverberate into the future. First and foremost, wars wrought by instability are detrimental to the livelihoods and rights of citizens. Political instability also presents security threats for neighbors and other countries, as fragile states may become havens for terrorist actors or hosts to disease outbreaks.

The pandemic-induced fragility could manifest in several ways. In some countries, social distancing policies that restrict economic activity and falling commodity prices due to slumping demand will have devastating consequences for individual livelihoods and government revenues. Countries that depend on food imports will likely experience shortages and rising prices as producer countries restrict exports. These economic crises may worsen poverty and trigger famines. Cash-strapped governments will be challenged to provide assistance, undermining trust in government.

Frustrated with declining incomes, some citizens could resort to violence and militancy. Governments could crack down with greater repression and restrictions on rights. Alternatively, as traditional patronage networks are disrupted by declining revenues, government elites may attempt rebellions to preserve their positions. 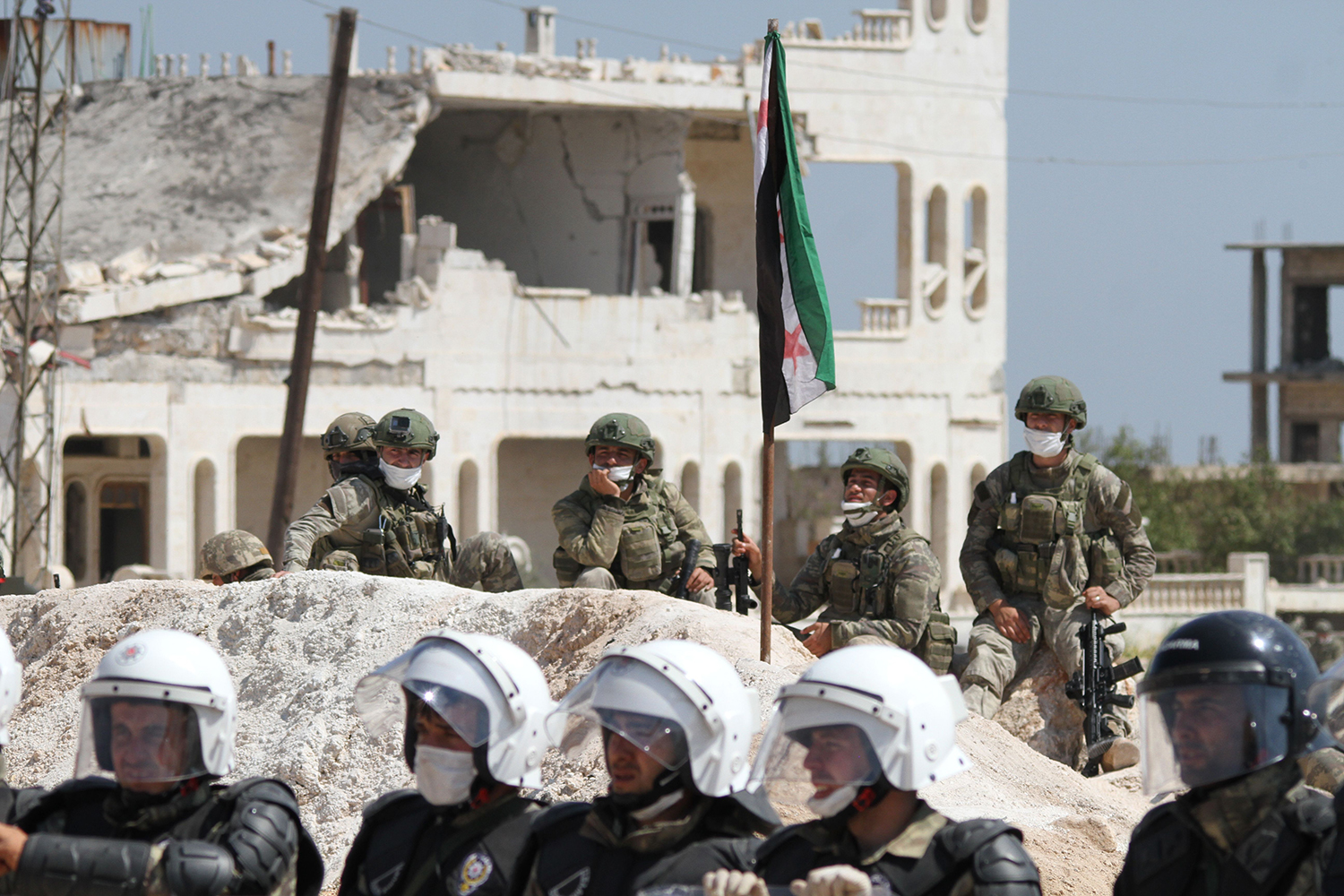 Turkish army troops take position behind sand barricades aimed at blocking the road by Syrian protesters on the M4 highway, which links the northern Syrian provinces of Aleppo and Latakia, in Syria’s northwestern Idlib province on April 13.ABDULWAJED HAJ ESTEIFI/AFP via Getty Images

For some countries, such as Afghanistan, Algeria, Libya, Mali, Syria, Sudan, and Yemen, the new fragility risks could enflame simmering conflicts and ongoing crises.

Afghanistan clings to hopes that peace talks between the government and Taliban will yield results after 18 years of war, but the pandemic is causing those prospects to fade. The coronavirus hit Afghanistan hard, straining its few and inadequate medical facilities. Since the outbreak began there, conflict has intensified, with the Taliban killing dozens of government soldiers and targeting health clinics. In May, the Islamic State claimed a horrific attack on a maternity ward in Kabul. The United States is pushing for a peace deal with the hope of withdrawing all of its forces before November, and it has also cut its foreign assistance by $1 billion.

Afghanistan’s GDP growth this year could swing from 3.5 percent—based on previous IMF estimates—to negative 3 percent, worsening poverty and economic prospects. As the government struggles to adapt to a downward development spiral, grievances and support for the Taliban or Islamic State could grow—leading to further violence.

The long-running war in Syria, which has declined in intensity over the past year, could also see a resurgence of violence. President Bashar al-Assad is facing a pandemic-related financial crisis—as are Iran, Turkey, and Russia, three of the main players in the conflict. Fewer resources could limit the government’s ability to maintain its military and hold territories retaken from insurgent groups throughout the country. In northeastern Syria, the Kurdish People’s Protection Units, or YPG, holds captured Islamic State militants in its prisons. But fears of a coronavirus outbreak among the prisoners, along with reduced U.S. support in the Kurdish-controlled region, could portend prison breaks and the remobilization of Islamic State forces.

West Africa could see its existing conflicts worsen—as well as a contagion of conflict. In the Sahel, Mali and Nigeria are already engaged in conflicts against Boko Haram and al Qaeda in the Islamic Maghreb, which could spread to neighboring countries. Senegal, Ivory Coast, and Sierra Leone face income declines and increasing odds of conflict. In Senegal, for example, the idle conflict with separatists in the Casamance region remains unresolved. A cease-fire was renewed in April, but the pandemic’s economic shocks could worsen wealth inequalities. While testing remains limited, the coronavirus hasn’t spread much yet across the continent—in part because community organizations are stepping up to assist. But if it does spread, it could overwhelm government capacity and sap social spending, undermining public confidence and reopening the wounds of prior conflicts.

The pandemic also threatens to raise the risks in recent post-conflict states and other countries not experiencing conflict.

In eastern and southern Africa, Rwanda, Zambia, and Zimbabwe are expected to experience heightened fragility, but Burundi—which suffered a devastating civil war between 1993 and 2005—may be the most vulnerable. The country saw democratic backsliding under the outgoing President Pierre Nkurunziza, who died suddenly last month just before his term was set to end. He increased his repressive tactics and employed armed youth militias to marginalize the political opposition. The opposition party contested the May election but accepted the Constitutional Court’s decision to declare ruling-party candidate Évariste Ndayishimiye the winner.

The turn of events could be an opening for unity, but future economic fallout could also restart tensions. The pandemic is expected to cause Burundi’s annual GDP growth to slide this year from 5 percent in previous projections to negative 5.5 percent, exacerbating high levels of poverty. The probability of conflict there will rise over the next two years from 37 percent in our original forecast to 70 percent in the updated forecast, per our calculations using the International Futures model.

Lebanon is especially fragile among countries in the Middle East, and the coronavirus is pushing it to the brink by escalating the country’s worst financial crisis in decades. In addition to its long-running refugee crisis stemming from the conflict in neighboring Syria, a collapsing currency and high debt have increased prices for staples. The untested prime minister has struggled to cement an agreement with the IMF for assistance. This has undercut the middle class and spurred protests, as nearly half of the Lebanese population lives in poverty. Hezbollah has provided health services for political gains. Some towns are successfully managing the spread of the coronavirus.

The Lebanese parliament passed a $300 million aid package in May to address the economic crisis, and the mandate for the United Nations peacekeeping mission in the south of the country was just renewed. But with its mix of challenges, Lebanon’s potential for conflict remains high. The IMF expects Lebanon’s GDP growth to decline in 2020 from a previous estimate of 0.9 percent to negative 12 percent. We estimate that the probability of internal war will nearly triple over the next two years. 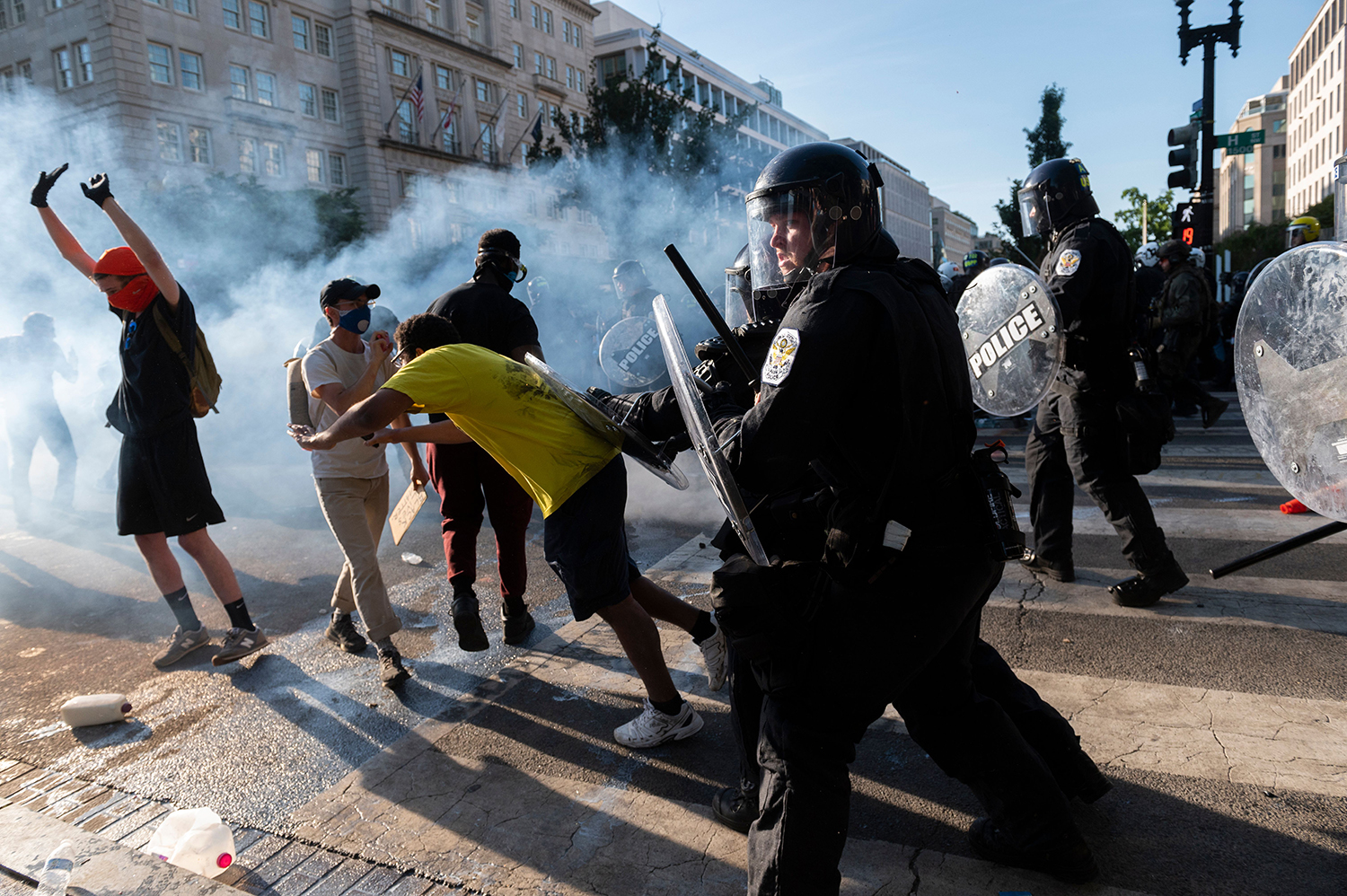 Per our models, the United States is unlikely to see an internal war, but the pandemic’s economic and health effects are tragic, and the country is experiencing a new level of fragility and social unrest.

The United States has experienced the most coronavirus casualties worldwide—a crisis largely of its own making. Mismanagement of public health care and politicized delays in instituting lockdowns could have cost as many as 54,000 lives through May, according to researchers at Columbia University. The lockdowns have led to record increases in unemployment. The prospect of election turmoil also looms, and the presumptive Democratic presidential nominee Joe Biden has raised concerns that President Donald Trump might use the crisis as a pretext to postpone or cancel the November election. (Democratic Party officials are planning several contingencies for disruptions.)

Racist violence by state forces is also generating social unrest. The police killing of George Floyd in May has prompted protests and calls for social justice across the country—leading the police to respond with further violence. State government officials characterized the situation as “urban warfare,” while the secretary of defense called for governors to “dominate the battle space” of America’s streets. In Washington, military helicopters conducted shows of force against peaceful protesters, and military troops were used against the demonstrators. African leaders have condemned the social problems in the United States, which could benefit from security sector reform and police demilitarization of the sort that African Union advisors often support in other countries.

A second wave of the coronavirus could follow the protests and nationwide reopenings, which could diminish trust in the government to mount an adequate public health response.

As governments struggle to balance flattening the COVID-19 curve with softening the pandemic’s social and economic fallout, there are reasons for hope. In 50 representative cases of fragility and the policy responses that we studied, governments were quicker to introduce political reforms and provide economic support for their citizens rather than engage in political repression or economic punishment of political rivals.

There were not many epidemics in the cases we sampled, but international support for public health initiatives helped Kazakhstan to tamp down a diphtheria outbreak that peaked in 1995 and Botswana to manage its HIV/AIDS crisis beginning in 2002. In more recent epidemics, such as Ebola and Zika, effective and coordinated policy responses provided openings to boost citizens’ trust in governments.

Policymakers in the United States and around the world have several options. They can encourage countries to make positive reforms rather than resort to crackdowns. Instead of withdrawing from the World Health Organization, as the Trump administration has, they can support such institutions to help more vulnerable countries provide care for their citizens and manage the spread of the coronavirus and related health shocks. The U.S. government can also speed up the implementation of the U.S. Global Fragility Act, a law passed last year with bipartisan support that is slated to provide $1.15 billion of assistance for conflict prevention and peacebuilding to fragile countries over the next five years. But without enduring efforts to address historical inequities at home, the United States may lack the legitimacy to assist with fragility abroad.

To minimize harmful health and governance outcomes in fragile countries that may spill beyond borders, wealthier countries must step up in solidarity to do their part.

Food Price Spikes and Social Unrest: The Dark Side of the Fed’s Crisis-Fighting

Jonathan D. Moyer is an assistant professor at the Josef Korbel School of International Studies at the University of Denver. Twitter: @moyerjonathan

Oliver Kaplan is an associate professor at the Josef Korbel School of International Studies at the University of Denver. Twitter: @oliverkaplan