Four months after the U.S.-Taliban deal, the militant group is growing—and growing bolder, while its al Qaeda ties remain.

In just the past month, the Taliban set up three new camps for their fighters just outside Sham Sharpoor village in Afghanistan’s eastern Nangarhar province, Gul reported, with another four camps farther away, in Tatang village.

“They have been expanding quickly since the signing of the U.S.-Taliban agreement, and that’s partly because there are barely any airstrikes now,” Gul, 47, explained. “Joining the Taliban has become a growing trend—and it’s not only civilians but also local police officers or soldiers whom I’ve seen switch sides.”

“Joining the Taliban has become a growing trend—and it’s not only civilians but also local police officers or soldiers whom I’ve seen switch sides.”

As government funds run dry, Afghanistan’s local police are due to be dissolved in the coming months. Gul’s not sure who will be left to defend his front-line outpost. “At that point I wouldn’t be surprised if more police officers join the militants,” he said, explaining that it might be the safer option for some, though reiterating that he wouldn’t follow suit.

More than four months after the United States and the Taliban signed their historic deal to chart a path toward peace, or at least end one chapter of the 19-year U.S. war in Afghanistan, unfulfilled promises are piling up, dampening the prospects of a peaceful or stable Afghan future.

The Taliban are growing in number—and audacity. Afghan National Security Council spokesperson Javid Faisal said the third week of June had been the deadliest since the start of the U.S.-led invasion in 2001, with 422 Taliban attacks in 32 provinces that left 291 Afghan security forces dead and another 550 wounded. Casualty figures might have been that high before, but the government rarely acknowledged them all, and actual casualties were often underreported. 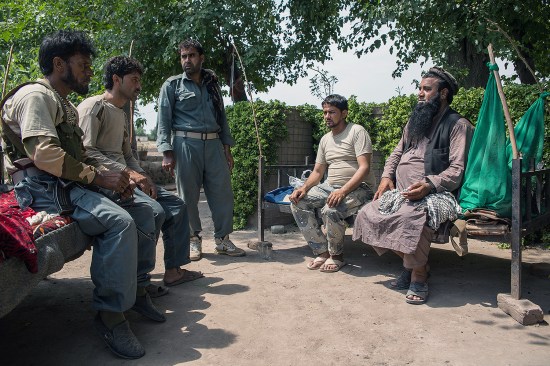 Gul (far right) sits with other police officers at his front-line checkpoint in Surkhrod on June 24.Stefanie Glinski for Foreign Policy

If the Taliban once again appear to be on the rise, that’s because in many ways they are—despite hopes of a durable peace deal between militants and the government. The lack of money to pay police is leaving many Afghans with little choice but to consider joining the Taliban; the fact that the militants now seem to have the upper hand gives them even more appeal as Afghans jockey for their own security in the future.

“What kind of choices are people making when the paychecks stop flowing?” said Laurel Miller, the Asia director at the International Crisis Group. “There have been long-standing concerns based on historical experience that once it seems that the tide is turning in the Taliban’s favor, you could see people get on board.”

Qari Kama, a 42-year-old drug and weapons smuggler in the Durbaba district of Nangarhar province, right on the Pakistani border and an hour’s drive east of Jalalabad, has done just that. “It’s not that I particularly like the group, but what choice do I have?” he asked. Kama sought permission to join from the Taliban’s shadow district governor; by early March, though no documents were signed, Kama had officially joined the group. “I am now a Talib.” He shrugged, sitting on the carpeted floor of his uncle’s house in Jalalabad.

“Support for the militants is growing because many people think they will gain power,” Kama added, explaining that dozens of his acquaintances had followed his lead. “Many of us fear a violent future and don’t believe that intra-Afghan talks will bring peace. If the Taliban becomes more powerful, we want to be on the safe side, that’s all.”

Another aspect of the U.S.-Taliban agreement also seems to be falling by the wayside. When the United States and the Taliban signed a deal on Feb. 29, the militants promised to cut all ties with al Qaeda, the transnational terrorist group that carried out the 9/11 attacks while under Taliban protection.

“It’s not that I particularly like the group, but what choice do I have? I am now a Talib.”

But the United Nations concluded in a recent report that relations between the two groups remain close and are rooted in “friendship, a history of shared struggle, ideological sympathy and intermarriage.” A U.S. Defense Department report last week similarly concluded that al Qaeda continues to work with “low-level Taliban members.”

Hussain Barzani, a Kabul-based researcher, said the two groups cooperate on the local level, such as in Nangarhar. “There are some economic ties and collaboration on technical issues, such as fighter training,” he explained. Additionally, even if cutting ties has strictly been decided by Taliban leadership, many local fighters simply don’t accept the order, he said.

Qari Ahmad, 34, a former Taliban and al Qaeda fighter trainer, who agreed to speak to Foreign Policy under a pseudonym, said the two groups are like “a brother and a sister,” though he says ties are usually most evident at the local fighter level. That has become more apparent as the Afghan government has begun releasing thousands of Taliban prisoners as part of the peace process.

“Of course they have good relations,” Ahmad said. “I recently learned that al Qaeda even supported some of the released [Taliban] prisoners who previously had al Qaeda links with small financial incentives,” he alleged, though this hasn’t been further confirmed. 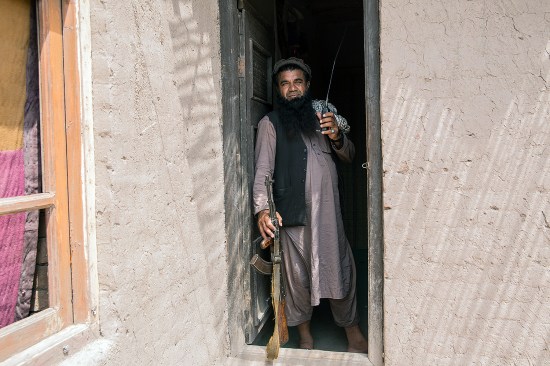 Gul stands at his outpost in Surkhrod on June 24.Stefanie Glinski for Foreign Policy

The Taliban dismissed the U.N. report as an effort to derail the already troubled peace process, saying in a statement on their website that it is “designed to undermine and destroy the agreement reached between the Islamic Emirate [Taliban] and the United States, which is an important instrument and tool for ending the war, lasting peace and security in Afghanistan.”

Even one apparent success in Afghanistan’s counterterrorism campaign now seems illusory. Last November, Afghan President Ashraf Ghani declared that the Islamic State in eastern Afghanistan had been defeated. While many fighters did surrender, others have dispersed into cities like Kabul and Jalalabad, where they are said to be rebuilding. Ahmad said the Islamic State, which previously had been strongest in rural areas, is now “growing their urban network.”

All that makes the prospects for the still sputtering peace talks even dimmer. Even as violence intensifies, and the Taliban grow stronger in places like Nangarhar, negotiations between militants and the government, slated to begin in March, have yet to do so in earnest. One hurdle has been securing agreement on the release of 5,000 Taliban prisoners from government custody in exchange for 1,000 government soldiers held by the militants, a process that is still ongoing. Taliban prisoners sign a declaration promising to not return to the battlefield but aren’t further tracked.

Just getting the two sides to the table is a long way from securing any kind of lasting peace or stability.

Zalmay Khalilzad, the U.S. special representative for Afghanistan reconciliation, last month urged Afghanistan’s top two leaders—Ghani and Abdullah Abdullah, the head of the High Council for National Reconciliation—to begin talks without delay. Deborah Lyons, the U.N. special representative for Afghanistan, now says talks will start this month in Qatar. But just getting the two sides to the table is a long way from securing any kind of lasting peace or stability.

“Both sides should not be deterred, and push forward to take the steps necessary to reach intra-Afghan negotiations, where a comprehensive ceasefire & a political settlement can be negotiated as quickly as possible,” Khalilzad wrote on Twitter.

But there is a long road from the start of negotiations to peace in Afghanistan, the Crisis Group’s Miller said.

“It’s the biggest opportunity in a generation to try to bring the conflict to a close, and at the same time, it will lead to an even messier situation on the ground because the stakes have changed,” she said.

Back in Sham Sharpoor village, Gul spends his afternoon sipping green tea in the shade of a few leafy trees with colleagues, worrying more about his country’s future than his own.

“We’ve seen more than 40 years of war, and still we worry,” Gul said. “I don’t know what the future holds, but one thing I know: Peace is still far. I hope that one day it will come.”

The U.S.-Taliban truce raises some hope—but not while the Afghan government remains a stranger to the talks.

Despite rising violence, some of Afghanistan’s most vital workers are fighting stigma to deliver health care to the country’s mothers.