Is India the Next Coronavirus Hotspot?

The world’s largest democracy surpasses Russia to become the country with the third-highest number of COVID-19 cases. Pakistan and Bangladesh are seeing increases, too.

Welcome to Foreign Policy’s South Asia Brief, the newsletter that covers the region comprising Afghanistan, Bangladesh, Bhutan, India, the Maldives, Nepal, Pakistan, and Sri Lanka. This week: India now has the third-highest number of coronavirus cases in the world, Pakistan’s foreign minister tests positive, China pulls back its troops from its border with India, and why Nepal’s cable operators are blacking out Indian TV channels.

Welcome to Foreign Policy’s South Asia Brief, the newsletter that covers the region comprising Afghanistan, Bangladesh, Bhutan, India, the Maldives, Nepal, Pakistan, and Sri Lanka. This week: India now has the third-highest number of coronavirus cases in the world, Pakistan’s foreign minister tests positive, China pulls back its troops from its border with India, and why Nepal’s cable operators are blacking out Indian TV channels.

Why South Asia Doesn’t Have as Many Coronavirus Deaths 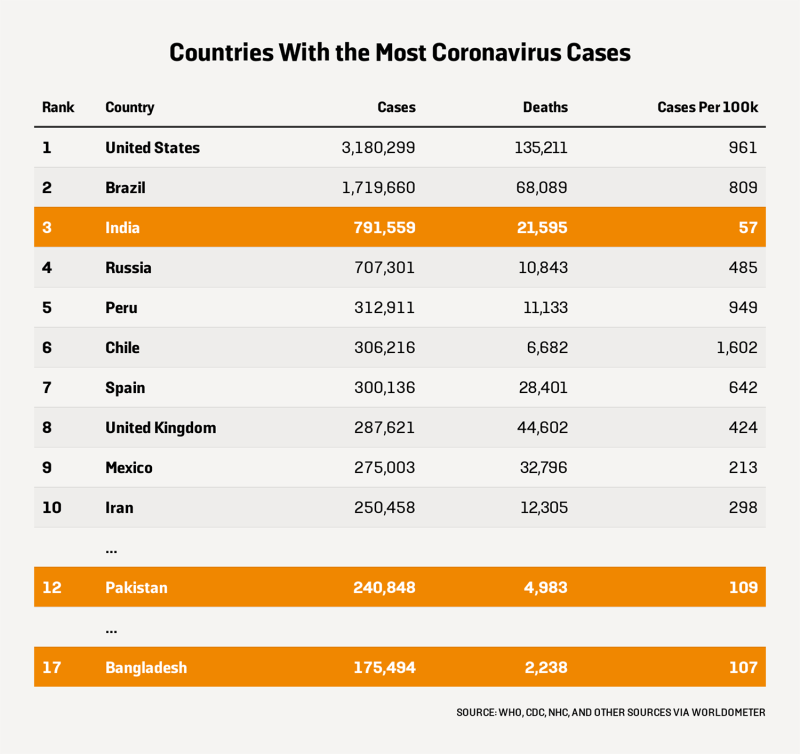 Earlier this week, India surpassed Russia to become the country with the third-highest number of confirmed coronavirus cases. Only Brazil and the United States have more. With nearly 800,000 cases and 21,595 deaths, the growth in infections in India is still rapid, with total numbers doubling around every three weeks. And as the chart above shows, Pakistan and Bangladesh are also rising up the rankings, although not as rapidly as their neighbor.

One enduring puzzle is why South Asia’s countries have recorded a lower ratio of deaths to cases than other countries with large outbreaks. India, for example, ranks third for cases but eight in the number of deaths. Similarly, Pakistan ranks 12th for cases but only 19th for its number of deaths; the corresponding rankings for Bangladesh are 17th and 27th.

What’s going on? It’s difficult to say. On the one hand, South Asian countries still have among the lowest rates of testing in the world, which implies a far higher actual case count and, in turn, an even more startlingly low death rate. On the other hand, some videos are emerging, for example from the Indian state of Karnataka, showing workers dumping bodies of COVID-19 victims into burial pits. In general, even under normal circumstances, most deaths in the region are not medically certified—so there are clearly some reporting and verification issues. But even those issues don’t fully explain South Asia’s low number of deaths so far. If the region is simply lagging, however—given the time it takes to contract and then fall sick from the coronavirus—then it may soon see a steep rise in its accounting.

More broadly, concerns continue about the reopening of the region’s economies. As Kapil Komireddi writes in FP this week about India, Prime Minister Narendra Modi “is now seeking to alleviate the social and economic woe aggravated by his own mismanagement of the lockdown by serving up Indians to the virus.” (Even so, he remains widely popular. A recent poll showed 74 percent of Indians approved of Modi’s leadership.) Meanwhile in Pakistan, as Zuha Siddiqui recounts in FP, “there are growing signs that control of the government is sliding fast out of [Prime Minister Imran] Khan’s hands,” as the military oversees the bulk of the country’s coronavirus response. Both Pakistani Health Minister Zafar Mirza and Foreign Minister Shah Mahmood Qureshi have tested positive for the coronavirus, suggesting that the disease has spread widely among Khan’s cabinet.

As always, here’s a weekly snapshot of the region’s countries and their total cases over the past four weeks. 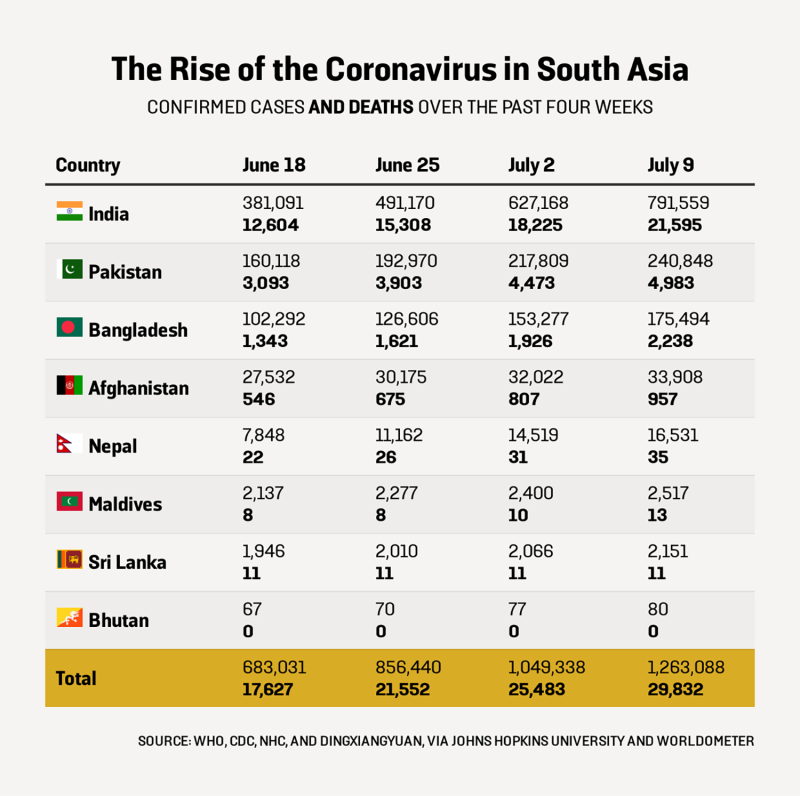 The China-India conflict. U.S. Secretary of State Mike Pompeo has weighed in on the ongoing tensions between the world’s two most populous countries. In remarks on Wednesday, Pompeo said China took “incredibly aggressive action” that aligned with President Xi Jinping’s “behavior throughout the region and, indeed, throughout the world.”

Pompeo’s remarks come as Indian sources tell various media that China has begun pulling back troops from along its contested border with India, where a deadly skirmish took place on June 15.

Fareed Zakaria points out in a Washington Post op-ed that “China is not rising in a vacuum but in a region with other major countries such as Japan and India and Australia. Every action Beijing takes should be considered in relation to the reaction it causes in those nations’ capitals. Thanks to its actions over the past few years under Xi, China today finds itself in the same strategic situation as the Soviet Union did during the Cold War—surrounded by countries that are growing increasingly hostile to it.”

But while conventional wisdom suggests New Delhi will turn closer to Washington as it jostles with Beijing, Emily Tamkin writes in FP that one shouldn’t rule out Moscow as another potential partner. “The world has changed, but India and Russia have found ways for their relationship to hold firm, standing steady for each other at times when the rest of the world wouldn’t,” she wrote this week.

Afghan prisoner release? Afghanistan’s release of Taliban prisoners has been a key sticking point in kick-starting peace talks between the government and the militant group, and now Kabul says it has a revised list of prisoners from the Taliban that it is considering letting go, according to Reuters. There is still no clarity, however, on when intra-Afghan talks may begin.

Nepal-India tensions. Nepal’s cable TV operators blanked out Indian news channels on Thursday, as fallout from Kathmandu’s recent decision to amend its maps to include territory claimed by India continues. Some Indian media had recently taken to suggesting a Chinese envoy in Nepal had met with with Prime Minister K.P. Sharma Oli. We “request the media not to disseminate news that infringes on the sovereignty and self-respect of Nepalis,” said Nepal’s information minister Yuba Raj Khatiwada at a press conference this week.

Bangladesh’s garment export businesses have suffered because of the coronavirus crisis: A drop in demand among major Western retailers has led to shocks further down the supply chain. Bangladesh, of course, is South Asia’s biggest exporter of readymade garments. But since when? In what year did Bangladesh overtake India as the region’s top garments exporter?

Venture capital dollars. The VC firm Sequoia Capital announced this week it had secured $1.35 billion to expand its investments in startups in India and Southeast Asia. As TechCrunch reports, Sequoia made more than 50 investments in India last year, more than any other venture fund. The group recently recruited the former India heads of both Google and Uber to help identify and mentor new startups. But all is not rosy with the India investment scene. As the Economist warned this week, New Delhi’s growing focus on “self-reliance” and local manufacturing—in part as a response to the coronavirus—is “a long way from the pro-business, investor-friendly posture which first got Mr Modi elected in 2014.” And when foreign companies do invest, they seem to have figured out that “getting ahead in India requires a powerful local partner” such as Mukesh Ambani or Gautam Adani, industrialists who are seen as close to Modi.

Going for gold. An unusual diplomatic row has broken out between the United Arab Emirates and India after customs officials in Kerala found 66 pounds of gold hidden inside the airport’s bathroom fittings. A package containing the gold was addressed to the UAE’s consulate in Thiruvananthapuram, raising suspicions of corruption among that consulate’s employees. The UAE’s embassy in New Delhi tweeted that “the culprits who not only committed a major crime but also south to tarnish the reputation of the UAE mission in India will not be spared.” 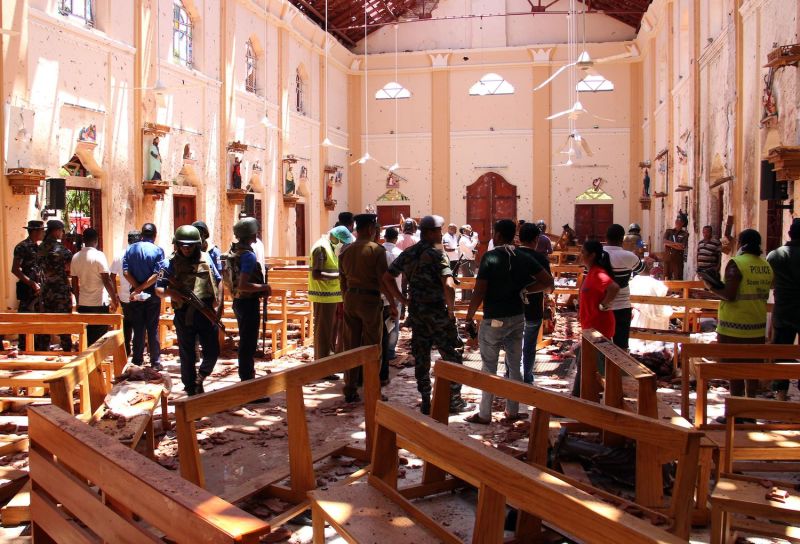 We often imagine that someone who has become a suicide bomber must have turned to violence as a last resort to escape difficult life conditions. But that is not always true. When Sri Lanka experienced a deadly coordinated series of suicide bombings on Easter Sunday in 2019, it emerged that two of the bombers came from a very wealthy family in Colombo who lived in a grand residence some locals called “the palace.” The writer Samanth Subramanian published an excellent deep dive in the New York Times Magazine analyzing what happened. “Most of us associate violence with desperation,” he writes. “What did the Ibrahim brothers have to be desperate about?”

It’s a difficult question, and I’m not sure Subramanian manages to uncover how exactly the suicide bombers were radicalized, but his reporting is rich in detail and texture, and represents an important study of a major South Asian event that never got sustained international attention. You can read the essay here.

C) 2007. As the Indian newspaper Mint points out, Bangladesh exported readymade garments worth $9.21 billion in 2006-2007, inching ahead of India for the first time. In the last fiscal year, Bangladesh’s exports of those garments were worth nearly $28 billion—almost twice as much as India’s exports. Part of the reason why India has lagged behind Bangladesh, the article explains, is that the latter has put in place flexible laws for seasonal work and is more efficient in turning large orders around and transporting them from factories to ports.