Why The Clock Is Ticking On Syrian Aid Access

Russia and China vetoed an attempt to maintain current humanitarian aid flows. The U.N. Security Council has until Friday to find a solution.

Russia and China Clash With U.S. and EU on Syria Aid

Russia and China are squaring off against their Western counterparts at the United Nations Security Council over a plan to maintain U.N. cross-border aid flows to Syria as a Friday deadline approaches.

On Tuesday, Russia and China vetoed a plan cosponsored by Germany and Belgium that would have allowed the two current crossing points to remain open to U.N. aid traffic for another 12 months. The next day, a resolution put forward by Russia that would have allowed one access point on the Turkey-Syria border to remain open for six months failed to garner enough votes.

Aid for Assad—or for Syrians? In rallying opposition against the Russian plan, U.N. ambassador Kelly Craft called the choice one of “good versus evil.”

U.S. and EU leaders argue that closing off one of the crossing points—Bab al-Hawa—would risk cutting off over a million Syrians in the area north of Aleppo from desperately needed humanitarian aid. China and Russia believe that such aid can be delivered from within Syria and handled by government authorities—a claim the United States and EU reject, fearing it would give too much leverage to Syrian President Bashar al-Assad over areas currently outside of his control.

On Friday, the U.N. mandate for delivering aid expires. However, Germany and Belgium are reported to have drafted a new resolution seeking to appease Russia: Both crossings should remain open, but only for the next six months.

A time to flex donor muscle? Writing in Foreign Policy on June 24, Charles Thépaut outlined how the U.S. and European Union, who together contribute roughly 90 percent of U.N. humanitarian aid to Syria, could use that leverage to drive a solution that keeps aid flowing—while avoiding playing into Assad’s hands.

Meanwhile, the misery continues. The great power back and forth comes at a time of increased misery for a war-ravaged Syrian populace, brought on by rising food prices, a collapsing economy, and a looming coronavirus pandemic. Writing in Foreign Policy on Monday, Robbie Gramer and I looked at the hard choices aid agencies are having to make as the threat of infection hampers relief efforts.

The coronavirus pandemic has already destabilized the global economy, and it could soon make the world more violent. Research by Jonathan D. Moyer and Oliver Kaplan, published in Foreign Policy on July 6, says the pandemic has increased the risk of war in already tense environments. 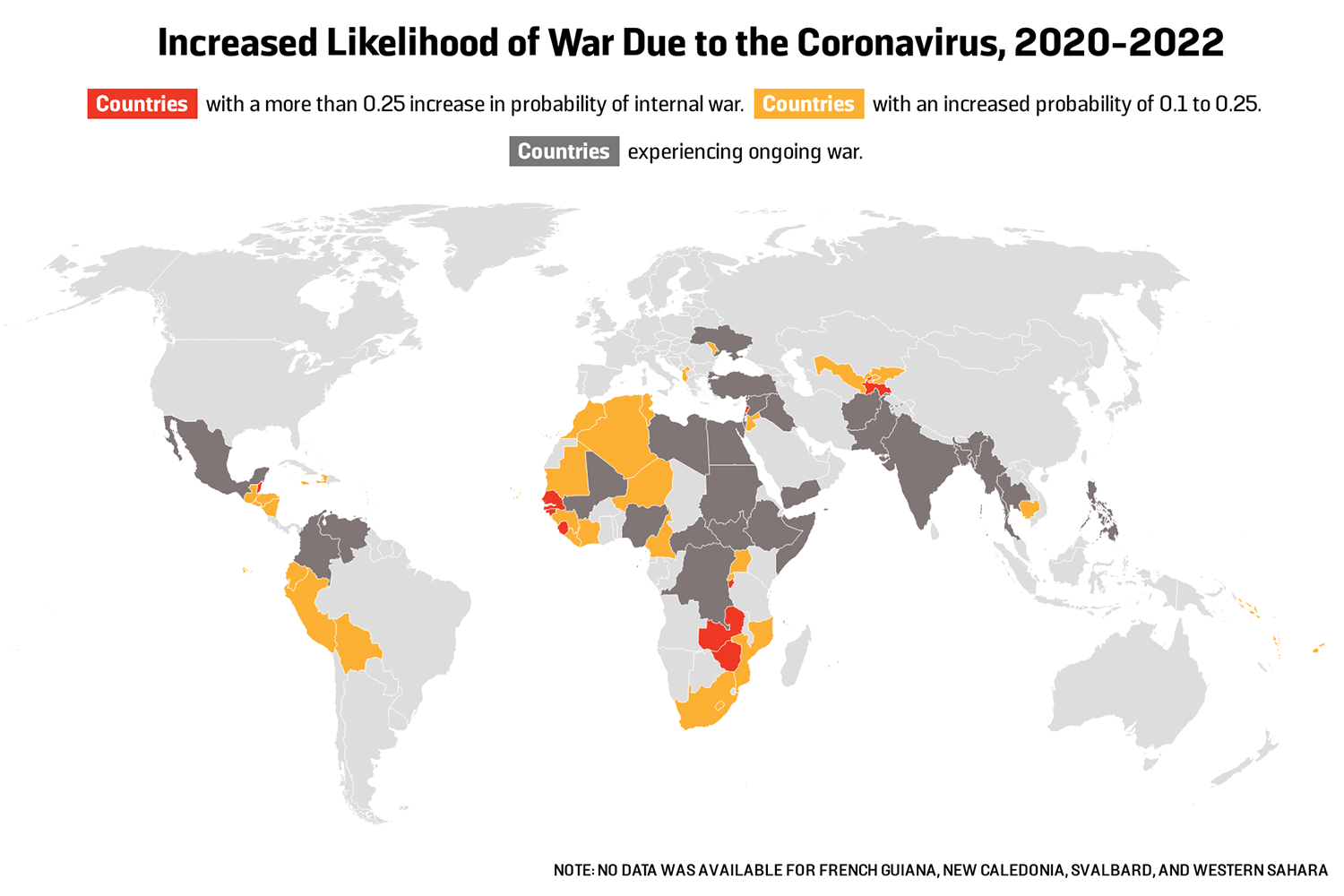 U.S. breaks coronavirus record again. The United States broke its own record for the most coronavirus infections recorded in one day on Wednesday with roughly 62,000 new cases reported. It breaks the previous record of 58,910 cases set on July 3. Anthony Fauci, the government’s top infectious disease expert, said that states would have to reconsider reopening plans in the face of the nationwide rise in cases. “Any state that is having a serious problem, that state should seriously look at shutting down. It’s not for me to say, because each state is different,” he said.

Ivory Coast Prime Minister dies. Ivory Coast Prime Minister Amadou Gon Coulibaly died in hospital on Wednesday after he had become unwell at a cabinet meeting, according to a statement from President Alassane Ouattara. Coulibaly had just returned from France where he had spent two months receiving treatment for a heart condition. His death complicates the upcoming presidential election on October 31, as Coulibaly had been nominated in March as the candidate of the ruling RHDP alliance.

Mass graves in Burkina Faso. The corpses of 180 men have been found in mass graves in northern Burkina Faso, Human Rights Watch (HRW) has reported. The men are alleged to have been victims of extrajudicial executions, prompting the rights organization to call on the Burkinabé government to launch an impartial investigation. “Existing information points toward government security forces, so it’s critical to have impartial investigations, evidence properly gathered, and families informed about what happened to their loved ones,” said Corinne Dufka, the Sahel director at HRW.

Fugitive Mexican governor apprehended. César Duarte, a former PRI party governor of the Mexican state of Chihuahua, was arrested in Miami on Wednesday, more than three years after he fled his home country after being accused of embezzling $4.2 million in public funds. On top of the corruption allegations, Duarte is alleged to have stolen hundreds of cows originally imported to his state to replace thinned-out herds following a damaging drought. Duarte now faces extradition to Mexico.

Facebook targets Brazil disinformation. Facebook has removed pages of a fake news network linked to allies of Brazilian President Jair Bolsonaro, including the president’s sons. The move is part of the social network’s crackdown on “coordinated inauthentic behavior,” defined as when groups or individuals work together to conceal their identities, motives, and activities on the platform. The network involved the creation of fake journalist accounts and fake news outlets in order to criticize opposition parties and Brazilian journalists. In all, 35 Facebook accounts and 38 Instagram accounts were removed. The Brazilian Supreme Court began investigating the network in May.

BJP leader shot dead in Kashmir. A former district chief of Narendra Modi’s Bharatiya Janata Party (BJP) was shot dead by suspected militants in Kashmir on Wednesday, according to local police. Waseem Bari, along with his father and brother, were attacked at Bari’s shop in north Kashmir. All three later died in of their wounds. As Anik Joshi wrote in Foreign Policy on June 16, tensions have increased in Kashmir after Narendra Modi’s government revoked the region’s special autonomy last year.

Japanese thrill-seekers have been urged by the operators of a Tokyo theme park to refrain from screaming on recently reopened rollercoasters, lest it hasten the spread of the coronavirus. The ban on screaming is part of a set of voluntary guidelines agreed upon by Japanese theme park associations as parks reopen across the country. Hoping to model good behavior for its guests, a video posted by the Fuji-Q Highland amusement park features two of its executives riding the popular Fujiyama rollercoaster in total silence. It ends with a plea to “Please scream inside your heart.”