One of the few remaining scholars openly standing against Xi Jinping is a reformist, not a revolutionary.

The knock at the door came Monday morning for Xu Zhangrun. The Beijing-based legal scholar had long anticipated such a day would come, writing more than once that an essay might be his last and keeping a fresh change of clothes by the door of his home. A score of police officers surrounded and seized him, reportedly with an accusation that he had solicited prostitutes—a charge so commonly trumped-up against dissidents that Xu himself previously warned it would be used against him. Until recently, he was a well-connected scholar at one of the country’s preeminent universities, Tsinghua. Now he is in the opaque world of the party-state legal system, meaning months of detention without formal charge followed by a brief show trial.

It is perhaps easiest to define Xu’s place in the tradition of dissent to Chinese authoritarianism by first stating what he is not. Xu Zhangrun is not an ethnic or religious minority. He is not a human rights lawyer. He is not a feminist activist. He is not an artist. He is not known to have been a participant in the 1989 Tiananmen Square movement. All these groups, and many others, have been targeted in Chinese President Xi Jinping’s many strikes at opposition, real and imagined, to absolutist rule since his ascension to power in 2012.

Xu’s role in the vanishingly thin network of resistance to the Chinese Communist Party’s spreading social control is different than leaders in each of those laudable groups. Xu is a scholar and critic seeking reform, not revolution. He clearly sees himself in the tradition of reformist personages going back to the imperial era. Figures such as Zhang Zhidong (1837-1909) remained loyal to China but sought to reform the Qing empire and reconcile Chinese sociopolitical traditions with the impositions of foreign thought. This tradition is perhaps vaguely similar to the notion of the loyal opposition in Europe. Xu’s writings are critical of Chinese political power structures but always evince a care for the well-being of the Chinese nation. It was this visible affection for his native land that allowed him to initially thrive as a scholar.

Xu’s first monograph, which began as his doctoral dissertation, provides a clue to his character. He discusses the thought of Liang Shuming, a notable scholar and official in the 20th century whose criticism of Mao Zedong in the early 1950s drew a sharp rebuke from Mao himself. Xu openly admires Liang, writing that he was “a great human being.” Xu presents the fundamental question of his study as how to forge legitimacy in the legal system by rooting it within China’s cultural heritage. Liang did not call for the end of the Communist Party or flee the country. As Xu explains, Liang criticized Mao and others not only for the mistakes of the early years after the revolution but for seeking social transformations by locating modernity only within external traditions of thought, “whether of the Euro-American variety or later Soviet.” 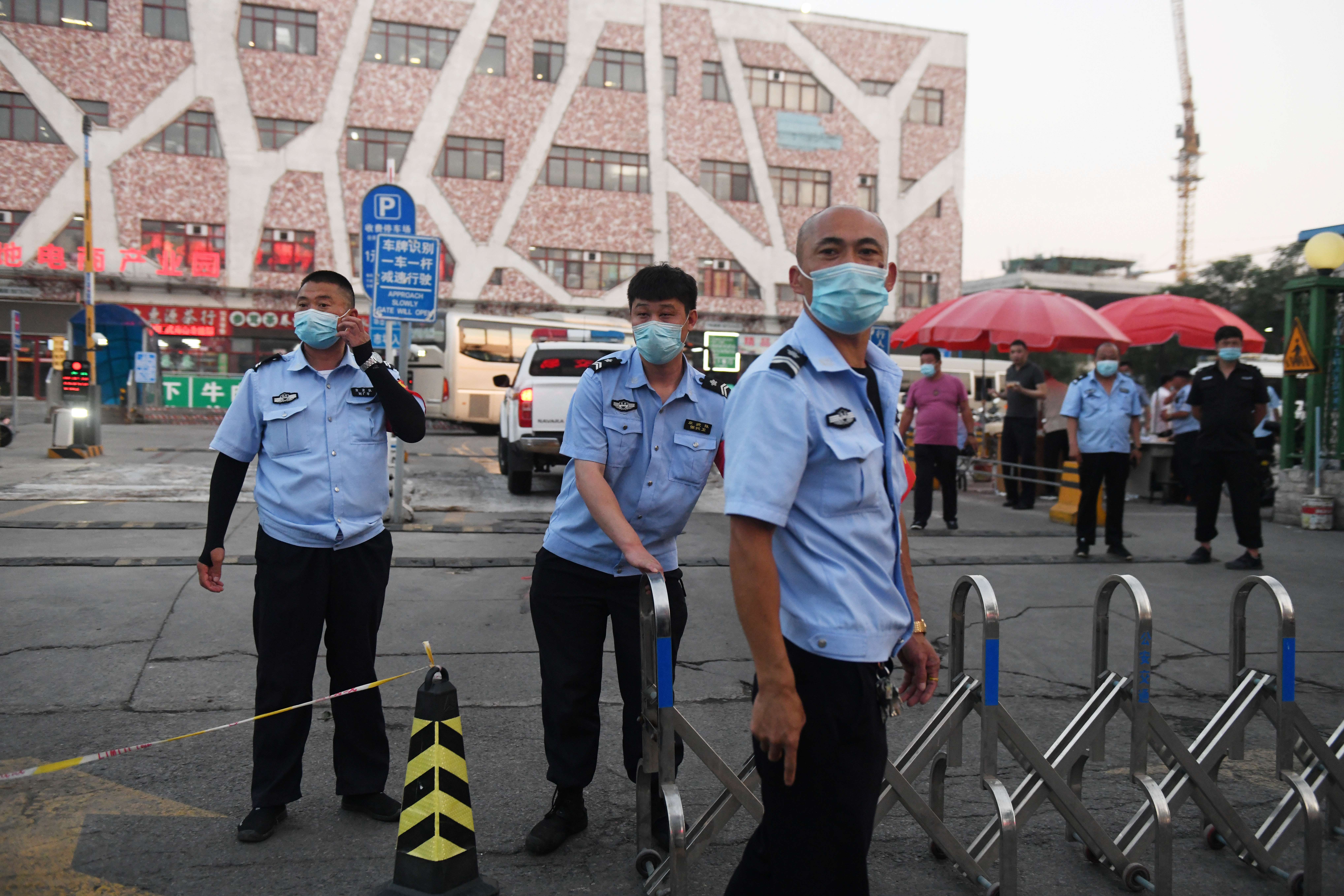 Chinese police block the entrance of the Xinfadi meat wholesale market in Beijing on June 12. Greg Baker/AFP via Getty Images

Xu and Liang both view communism as foreign to Chinese culture, despite all efforts by the party to weld itself to Chinese nationalism and social traditions. “Can groups of humans who were bounded with home-grown traditions survive by totally shifting to those of others, after they have destroyed their own traditions?” Xu asks, noting the risk of social dysphoria caused by the broad application of any system not rooted within China’s own culture, whether liberal or socialist in nature. Without deep roots in the “solid meaningful soil” of Chinese culture, he argues, the legitimacy of any legal system is questionable.

While Xu praised the reforms of the early 1980s, his suggestion in his work on Liang Shuming that the legal system’s legitimacy requires a deeper foundation in Chinese culture is different than the party’s oft-touted “Chinese characteristics.” Xu finds in Liang’s work and in the Confucian tradition a basis for equality before the law, and the law standing above any person or movement. Further, he argues that a central tenet of Chinese tradition is that a contemporary political authority may not so dominate as to impede the processes of human reason. This is quite different from the party’s notion of Chinese characteristics consisting of an overwhelming central authority, a mixed economy with market and socialist aspects, and Han favoritism.

Just as Liang did not reject the Communist Party’s rule outright, even in his harshest criticisms, Xu does not call for an end to the party-state nor even directly call for democracy. Instead, in the 2018 essay that brought him much greater prominence, “Imminent Fears, Immediate Hopes—A Beijing Jeremiad,” he offers a series of reforms that he says would improve the social harmony and well-being of the Chinese nation. Perhaps Xu’s most penetrating insight in this essay was to dissect just how toxic Xi’s abolition of presidential term limits was. Xu argues that a limit of 10 years on a leader’s term meant greater tranquility for the Chinese people—“one less thing to worry about” as the chances of “yet another period of political instability” were reduced. “Despite all the vacuous hoopla about other kinds of political reform initiatives,” Xu contends, the establishment of term limits in the 1980s had been “the only tangible example of real political reform and progress in China” in three decades that was actually meaningful to ordinary Chinese people. By further concentrating power, China risked returning “back to the Dark Ages” of personality cults ruining the lives of ordinary Chinese.

As his own freedoms were relentlessly curtailed, this year Xu allowed himself to admit his own emotions were closest to “righteous indignation” (a term he carefully delineated as Western) when he considered the political system that had allowed the coronavirus to flourish while stripping him of his occupation for merely writing an essay. Though he despaired that scholars such as himself were “useless,” he still called on fellow Chinese to “rage against this injustice.” In his last missive, he even dared to call openly for independent political parties to be formed.

What happened to Xu on Monday is part of the larger constriction of political, social, and cultural thought occurring in China under Xi. Mirroring the aggressive maneuvers Xi has pursued at China’s periphery while the world is distracted with the coronavirus, it reaches nearly every corner of society. It is becoming more formalized with each passing day.

Late last year, the party removed the phrase “freedom of thought” from the charters of several major universities, replacing it with language insisting upon allegiance to the party. It remains to be seen how successful the party will be at erasing every smudge of dissent. So far, no force of sufficient power has resisted it. The link that once led to Xu’s biographical page on the website of Tsinghua University now leads only to an error message stating that the page cannot be found.

Michael Rowand is a writer specializing in international affairs, currently a graduate student at Oxford University.

On Election Eve, Economists Struggle to Figure Out a World That’s Unraveled