A new book advances a robust defense of the U.S. system of alliances. A post-pandemic world requires adaptation and renewed coordination against common threats.

On Sept. 19, 1796, George Washington’s Farewell Address appeared in the American Daily Advertiser, the first successful daily newspaper in the United States. Much of the text concerned the new country’s domestic affairs, with the outgoing president warning Americans against the dangers of political parties and sectionalism. But he did not refrain from airing his views on foreign policy, stating in no uncertain terms that the country should “steer clear of permanent alliances with any portion of the foreign world.”

“The nation which indulges toward another a habitual hatred or a habitual fondness is in some degree a slave,” Washington wrote. “It is a slave to its animosity or to its affection, either of which is sufficient to lead it astray from its duty and its interest.” In his inaugural address, President Thomas Jefferson sounded a similar note, pledging “peace, commerce, and honest friendship with all nations, entangling alliances with none.” 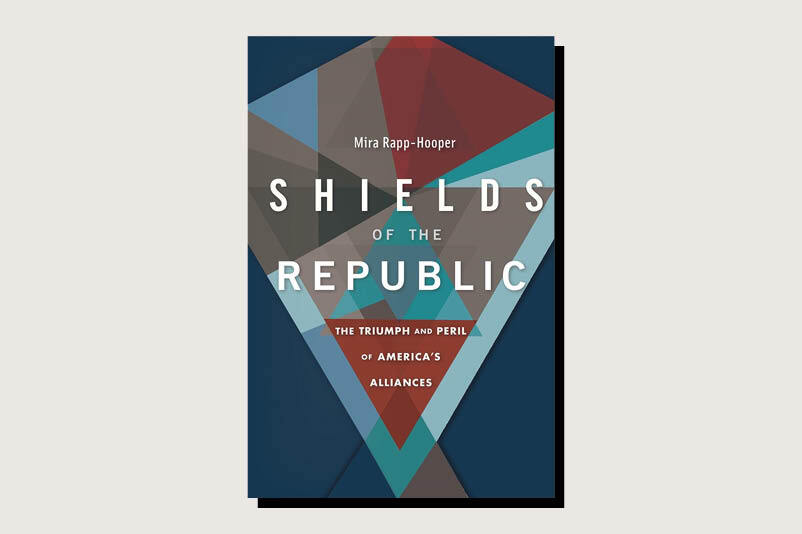 It should come as little surprise, then, that for its first 165 years, the United States had only one alliance: its 1778 pact with France, under which France provided badly needed military supplies to the new nation as it fought for its independence. It was not until after World War II that the United States came to see alliances as critical to its national security: Between 1948 and 1955, Washington formed security guarantees with nearly two dozen countries in Europe and Asia. Today, the United States has defense pacts with more than 60 countries, accounting for one-quarter of the world’s population and nearly three-quarters of global GDP.

Despite enduring support among the U.S. public for the alliance system, President Donald Trump seems determined to upend it, as Mira Rapp-Hooper observes in her astute new book defending U.S. alliances, Shields of the Republic: The Triumph and Peril of America’s Alliances. Like much else in Trump’s America, alliances are now partisan: The president and his supporters denounce them, while his critics struggle to defend them. Rapp-Hooper aims to come to the aid of these embattled defenders—to explain, convincingly, “why America has alliances, what they have accomplished, and why they remain valuable.”

Throughout the 19th century, the United States had little need for alliances, thanks to its favorable geography and its lack of overseas colonies. But in the aftermath of two world wars, technological breakthroughs such as long-range air power, missiles, and nuclear weapons left the United States newly exposed. U.S. policymakers embraced a new approach. “Never again can we count on the luxury of time with which to arm ourselves,” President Harry Truman told Congress in October 1945. As Secretary of State Dean Acheson put it in 1950, the United States could no longer “pull down the blinds and sit in the parlor with a loaded shotgun, waiting.” The United States had an enduring interest in deterring a hostile adversary from dominating Europe and Asia.

Alliances offered U.S. policymakers a solution to these challenges. They would allow Washington to confront threats—such as those posed by Moscow, Beijing, or Pyongyang—far from U.S. shores. In exchange for security guarantees, the United States would gain access to bases ideal for deterrence and forward defense in Europe and along the first island chain, the string of islands that includes Japan, Taiwan, and the Philippines. Alliances would increase U.S. leverage over weaker allies, restraining them from provoking their neighbors. And extended deterrence—the ability of the United States to deter attacks on its allies as well as itself—would help prevent the outbreak of wars in the first place. By 1953, the National Security Council had concluded that alliances were “essential,” since the United States could not “meet its defense needs, even at exorbitant cost, without the support of allies.”

The strategy paid off, Rapp-Hooper argues. Throughout the Cold War, no U.S. treaty allies were ever attacked. U.S. alliances helped rehabilitate Germany and Japan as consolidated democracies with dynamic economies while reassuring other European and Asian allies that their former adversaries would be restored as benign actors. The alliance system also helped Washington keep its allies in check: For example, it restrained anti-communist allies in Asia from starting wars to shore up their domestic legitimacy. As Victor Cha, a political scientist and former National Security Council director for Asia, writes, each of America’s East Asian alliances was a “‘powerplay’ … designed to exert maximum control over the smaller ally’s actions.” U.S. security guarantees also helped to convince South Korea, Taiwan, and West Germany to abandon nascent nuclear weapons programs.

But isolating the role of alliances in preserving peace is not easy. If alliances work properly, their success should manifest in crises that never materialize and wars that never come to pass. Without access to the counterfactual—a world in which the United States pursued no alliances after World War II—it is difficult to prove that the country would be better off with alliances than without them. Realizing this, Rapp-Hooper offers several thought experiments, imagining, for example, how the Berlin crisis of 1961 might have unfolded without NATO. “The United States would have had a far more difficult time defending its position in West Berlin,” she writes, “if not for its alliance commitments.” That may not be enough to mollify the alliance system’s critics.

In recent years, those critics have been emboldened by Trump, whose criticisms of the alliance system are different in both kind and degree from his predecessors. From the beginning, he has questioned the value of NATO, cozied up to dictators, and berated long-standing U.S. allies such as Australia, Canada, and Germany. He rejects the United States’ postwar internationalist strategy of forward defense and deterrence through prepositioned forces. And his hostility is not just rhetorical: In June, Trump blindsided the German government by approving a plan to cut 9,500 troops stationed in Germany, a reduction of more than one-quarter.

Rapp-Hooper writes, correctly, that Trump’s tactics are unlikely to coerce U.S. allies to spend significantly more on defense. And the costs of Trump’s antipathy could be significant: reduced U.S. control over the actions of its allies, undermined military effectiveness, and the erosion of deterrence. She also dismisses the argument that alliances risk dragging the United States into costly wars it would otherwise avoid. As she points out, the United States mitigated this risk in the past by being selective and rejecting requests for overly risky security pacts. The United States has never extended formal security guarantees to Israel or Saudi Arabia, for example. Few, if any, of the United States’ ill-advised wars in recent years can be blamed on its allies.

But if U.S. alliances are to survive the current onslaught from the Trump administration, it is not enough merely to extoll their virtues. The bipolar world that gave rise to the alliance system no longer exists. U.S. alliances need to adapt to new military threats and new loci of global power.

For Rapp-Hooper, this means recognizing that warfare has moved beyond large military incursions and updating current defense pacts to include plans for responding to information warfare and cyberattacks. Here, she offers two particularly smart suggestions. One is for NATO to alert members at risk of election interference and to coordinate a response, learning from countries, such as France, that have warded off Russian meddling in the past. The other is for the United States to take a more sophisticated approach to burden-sharing, focusing more on each country’s unique capabilities: Estonia, for example, could provide needed expertise on cyberlaw and cybersecurity.

It also requires recognizing the challenge that China’s rapid ascent poses to U.S. interests, which might entail securing buy-in from allies like Japan to install land- and ship-based missiles along the first island chain. In Europe, Rapp-Hooper advises NATO “to hold the line while Russia declines,” ensuring that it is able to respond rapidly to a Russian military attack or disinformation campaign. Notably, she says relatively little about the wisdom of NATO’s recent expansion to countries like Montenegro and North Macedonia, which are militarily weak, geographically vulnerable, and politically fragile. But for Rapp-Hooper, the overarching purpose of alliances has not changed: They should help the United States prevent a hostile hegemon from dominating Eurasia.

Many of these recommendations are sensible. But Rapp-Hooper doesn’t have much to say about one significant threat to the alliance system. Democracy has eroded, if not collapsed, in several NATO member countries, including Hungary, Poland, and Turkey—whose relations with the United States have taken a sharp nosedive in the last year. Rapp-Hooper’s response to this trend is frustratingly vague: She calls for NATO to put in place regular monitoring procedures for member states at risk of democratic backsliding. The European Union has struggled to implement similar monitoring, and Rapp-Hooper could have provided more detail on how such a system might work—and, more broadly, how the alliance system can remain cohesive in the absence of the shared democratic values that have helped bind it together.

Were Rapp-Hooper writing the book now, no doubt it would have something to say about the coronavirus pandemic. The threat of COVID-19 has bolstered her argument, making plain both the importance of the alliance system and the imperative to adapt alliances to new ends. The pandemic offers a chance for the United States to renew its emphasis on allied coordination: to make its alliances the focal point in addressing common threats, whether traditional military challenges or global health initiatives. If the United States seeks continued security and prosperity, especially now, strengthening its alliances is a good place to start.

Sam Winter-Levy is a Ph.D. candidate in politics at Princeton University. Twitter: @SamWinterLevy

Nikita Lalwani is a 2020 graduate of Yale Law School.

How the Bottom Fell Out of the U.S.-Saudi Alliance

A rocky marriage of convenience that has lasted since World War II could derail as oil markets crash and mutual mistrust reaches new heights.