When the Numbers Don’t Add Up in China

A historian explores how Beijing has tackled its statistical woes over the years.

Successful book launches often depend on timing, as any writer facing this season of canceled book fairs and tours will tell you. They have helplessly watched as their new releases languished, lost in the babble of pandemic press conferences and news headlines, competing for relevancy in a time of global human and economic disruption. A few authors, however, have found themselves in the opposite circumstance. Arunabh Ghosh could not have imagined how timely his book would be when he set out more than a decade ago on his research project. But Making It Count, an academic work published by Princeton University Press examining the history of statistics in China, lands at a time when the world is wondering: How does Beijing collect data, and what did it know about COVID-19 and when?

Successful book launches often depend on timing, as any writer facing this season of canceled book fairs and tours will tell you. They have helplessly watched as their new releases languished, lost in the babble of pandemic press conferences and news headlines, competing for relevancy in a time of global human and economic disruption. A few authors, however, have found themselves in the opposite circumstance. Arunabh Ghosh could not have imagined how timely his book would be when he set out more than a decade ago on his research project. But Making It Count, an academic work published by Princeton University Press examining the history of statistics in China, lands at a time when the world is wondering: How does Beijing collect data, and what did it know about COVID-19 and when? 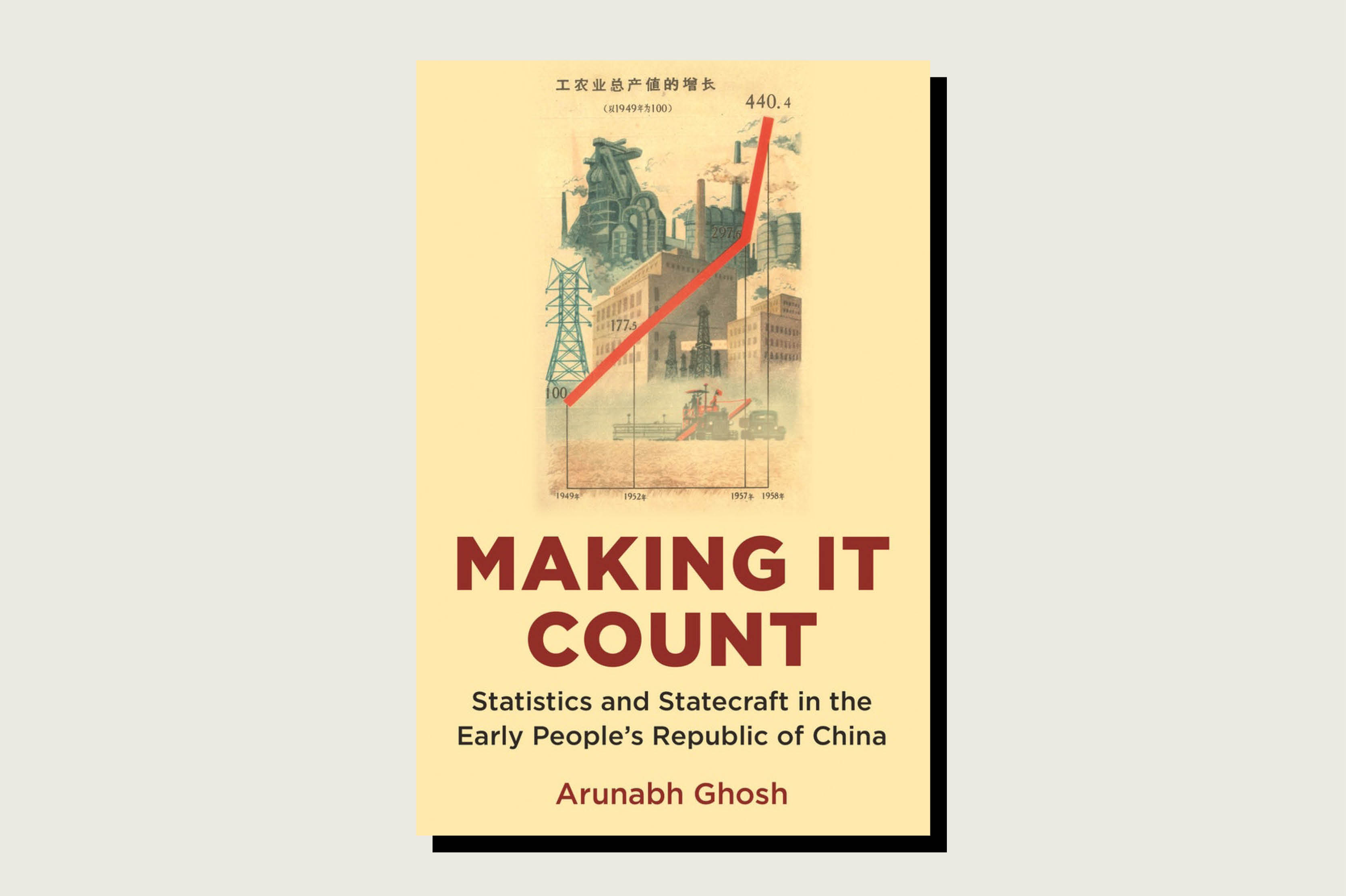 “The information that we got at the front end of this thing wasn’t perfect,” complained U.S. Secretary of State Mike Pompeo in March, when only about a dozen Americans had died from the disease. “It has proven incredibly frustrating to work with the Chinese Communist Party to get our hands around the data set.”

That implies Beijing had the right numbers to begin with. By U.S. intelligence agencies’ own assessments, the Chinese central government struggled with facts on the ground in the early days of the outbreak, as municipal bureaucrats in the city of Wuhan and elsewhere downplayed infection rates and death counts. Other reports simultaneously show that Beijing withheld critical medical information from the rest of the world, including to the World Health Organization. But that—as Ghosh well illustrates—is a paradox often encountered in the history of modern China: A government obsessed with numbers and information all too often lacked them in practice.

Numbers have become a world obsession. We check the daily COVID-19 counts in our local cities and countries, tracing the lines along the charts which signify our progress or failure to flatten the curve. They have become a political liability in countries from the United States to Brazil, a way for the public to hold leaders to account, even as presidents dispute the data. And between the United States and China, numbers have become a tool in the global blame game, with U.S. diplomats pointing to the unbelievability of Wuhan’s death toll while Chinese diplomats point to the carnage in the United States as a reflection of rotten governance and superpower ineptitude. Numbers, as Ghosh reflects, can “obfuscate as much as they illuminate.”

His book begins  before the founding of the People’s Republic of China in 1949, and ends around the time of the disaster of the Great Leap Forward, when bad statistics became a deadly weapon in the arsenal of ideologues who knew that the system couldn’t have failed, so the peasants must be stealing the food. Measuring production was necessary for controlling it. Size and scale were national obsessions, as a glance through state media from those years reveals. That habit has lingered in modern Chinese journalism, where reporters will still relay a factory’s size in square meters, number of employees, and output per day as though readers cared to know every detail of the Third Tianjin Amalgamated Ironworks.

Throughout the first decade of the People’s Republic of China, statisticians toiled at their books, though in chapter after chapter they feel like the background hum as more dramatic historic events played out on the Chinese stage, driven by the charisma of a megalomanic ideologue. Statisticians collected data on industry, agriculture, and many other outputs. The experts debated methodology, with a consensus settling on “exhaustive enumeration,” which meant counting everything, similar to the way we conduct a census as opposed to some kind of sampling.

Carrying out this vision required as many as 200,000 people, a number mentioned in government accounts, though Ghosh questions just how well trained this bunch could have been. Yet getting statistics right was key for the new communist state, Ghosh explains, because it was “a principal way to be modern, and to demonstrate one’s modernity to others.” Communism was, in its own imagination, a scientific ideology, one that depended upon information and organization; that it was often lacking either in practice was a mere speed bump on the way to progress.

Possessing good data as a form of legitimacy resonates in contemporary China today. The authoritarian state views itself as fact-based. Compared to other closed societies, it is—Beijing does not deny climate change and actively works to combat it, for example, and officials ostensibly depend on data to formulate policy. In practice, censorship and propaganda muddy what they know, with everything from official gross-domestic-product numbers to the population of the country suspect. In an effort to overcome the problem, the government has embraced artificial intelligence and big data by hoovering up its citizens’ digital footprints, an effort that has only accelerated with the pandemic. That such aggressive incursions into people’s lives have still produced patchy information underscores the data challenge. China also grapples with the added tension between leaders, who want access to as much information as possible while keeping that information away from the general public, and subordinate officials, who are determined to bend the numbers to their own best advantage.

To different degrees, all countries struggle with obtaining reliable data. The pandemic has taught us that even a count of cases and deaths which at first sounds straightforward ends up playing out in complex ways. Do you tally asymptomatic cases? How do you determine who gets tested? Do you include antibody results? What is the cause of death for someone with other health complications? In Florida, the politicization of the count contributed to more chaos: The Department of Health fired one scientist who accused state officials of undercounting infections and overcounting the number of people tested to present a rosier picture. China does not own a monopoly on the weaponization of data to suit political agendas.

Even if a government makes good-faith efforts to collect information, Ghosh reminds us that statistics “exist at the crossroads where mathematical certainty encounters the messiness of quantifying and categorizing the inherently imprecise characteristics of human existence and activity.” We often think of China fiddling with numbers it’s unhappy with—that is, outright fraud. But Ghosh points to how problems arise at the start of data collection, with wrong assumptions, sloppiness, and biases. Perfect information, it turns out, will never be available to make perfect decisions—and even if we do possess the right statistics, different interests will work to corrupt the message.

Two chapters particularly stand out in Ghosh’s work. He spent time sifting through archives in India and China, and tells us about an interesting period from 1956 to 1959 when statisticians from the two great civilizations held exchanges. These meetings included founder of the Indian Statistical Institute Prasanta Chandra Mahalanobis, who met Chinese Premier Zhou Enlai during Zhou’s visit to India. The Chinese leader invited Mahalanobis to Beijing, and the expert in large-scale random sampling accepted. His visit came at time when some leading Chinese statisticians had lost confidence in their “exhaustive enumeration” approach and sought additional modes to count.

This dialogue fizzled in part with the arrival of the Great Leap Forward and the subsequent famine, the death toll of which is still debated by scholars, who estimate that anywhere from 25 to 35 million Chinese died. The overzealous use of unreliable data contributed to the tragedy. “The outcome was a Chinese state that, in spite of generating copious amounts of facts, remained poorly informed,” Ghosh writes. But what his book also shows is that there have always been scholars trying to get the best information—then and now—even if political cadres disregarded and sometimes outright sabotaged it.

Melissa Chan is a national and foreign affairs reporter who previously worked as a broadcast correspondent for Al Jazeera. She is a collaborator with the Global Reporting Centre and a term member of the Council on Foreign Relations.

Nobody Knows Anything About China

Including the Chinese government.