History’s autocrats have been the architects of their own demise. Even if he seizes power, so will Trump.

Joe Biden, who is way ahead in the polls, has called it his “single greatest concern.” What if Donald Trump refuses to leave office freely if Biden, the presumptive Democratic nominee, wins the November election? Last weekend, the president openly suggested to Fox News that he might not accept the results, declaring: “I’m not going to just say yes. I’m not going to say no.” Indeed Trump is already working to invalidate the 2020 tally, accusing Democrats of plotting fraud through mail-in voting that might be needed because of the pandemic, and legal challenges by his allies are mounting at an unprecedented rate. Moreover, Trump has spent his entire first term trampling over the institutions of American democracy, obstructing justice and defying Congress and the courts and crying “coup!” every time he’s investigated.

Alternatively, what if Trump doesn’t seize power illegally but is actually reelected? Surely that would amount to a virtual mandate, in his mind, to ignore the Constitution and the law of the land altogether. Plenty of fascists past and present—from Benito Mussolini to Vladimir Putin—have made mincemeat of vulnerable democratic systems to install themselves as autocrats. For more than four years, legions of Trump critics have accused him of having fascist tendencies, and American democracy now appears badly wounded, if not broken, and vulnerable to further manipulation, especially since Trump has turned the Republican Party into little more than a cheerleader for his personal aggrandizement. Only this week, in a move that echoed past fascist practices, Trump threatened to send in additional federal forces to American cities such as New York and Chicago that he said were run by the “radical left,” even without the cooperation of their elected officials.

Fascism, as the Yale University scholar Jason Stanley has written, “is not a new threat, but rather a permanent temptation.” And Trump’s words and actions indicate that he’s sorely tempted to emulate autocrats he admires around the world. One never knows for sure when Trump is joking—he insists he is whenever he is criticized for saying something especially controversial—but in 2018 Trump spoke glowingly of Xi Jinping’s brutal consolidation of power in China and his title of “president for life.” “I think it’s great. Maybe we’ll have to give that a shot someday,” Trump said.

So let’s suppose the worst: Trump—whom his niece, the author Mary Trump, calls the “world’s most dangerous man”—really does attempt to embrace his inner fascist in the coming months. The good news is that history tells us he will almost certainly fail in the end, especially since Trump possesses nothing like the fearsome competence or detailed programs of fascists past. Fascism in its various forms has no enduring record of success in the long run; based on the evidence, it is almost always doomed to destroy itself in an orgy of ultranationalism and megalomania, as Adolf Hitler and Mussolini did. Other fascists or strongmen who stayed in power longer, like Francisco Franco of Spain and Turkey’s Kemal Ataturk, did so by wisely changing course or because they were misunderstood and weren’t really fascists at all for much of their careers, some scholars say.

By itself, “fascism is difficult to work in practice because it always has grandiose visions inconsistent with reality, upon whose shores it crashes,” Stanley, the author of How Fascism Works, told Foreign Policy. It may be an effective means to gaining power, but fascists typically destroy themselves before long, especially when crises erupt. “We are seeing that with COVID-19 in the United States and Brazil,” Stanley said.

To win in November, Democrats must avoid being lured into Trump’s culture war.

Stanley’s 2018 book is a detailed look at the broad concept of fascism, which he defines as ultranationalism embodied in one leader and movement, and at the kind of politics that fascism typically practices. These strategies are familiar to anyone who has observed Trump’s rise: inventing a mythic past of greatness, promoting anti-intellectualism, playing up national victimhood and the need for law and order, appealing to the heartland, and fomenting division, especially by attacking immigrants and liberal elites. Like Trump, fascists almost always promise to “drain the swamp” by concocting false charges of corruption, as the U.S. president did against Hillary Clinton and is now doing against Biden. Above all, Stanley says, fascist politics is about identifying enemies, appealing to an insecure majority group like America’s white population, and destroying truth and replacing it with power. As Mussolini said in a 1922 speech, to create a fascist national myth “it is not necessary for it to be a reality.” 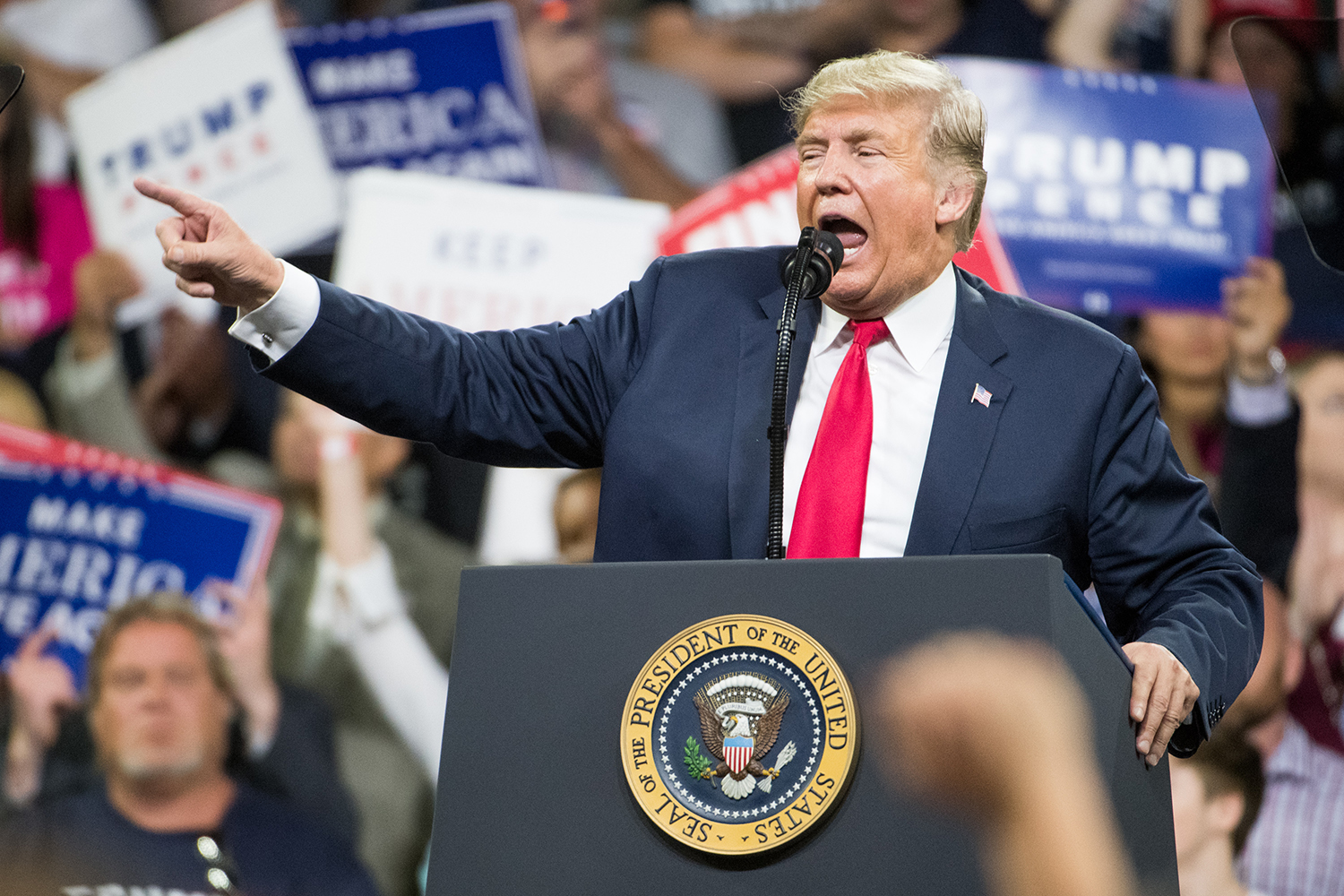 In his book, Stanley invokes the German word Gleichschaltung—describing the Nazification process by which Hitler slowly destroyed Germany’s liberal democratic organizing principles—to help explain what is happening in several major democracies today, including the United States, India, and Brazil. “In all three countries, there is movement toward unifying institutions around loyalty to an ethnic identity, as in India, or loyalty to a single leader, as in the United States, where the most powerful political party is increasingly defined by fealty to Donald Trump,” Stanley writes. “This threatens the democratic nature of these institutions as well as their competence to carry out their institutional missions. Our democratic culture is on life support.”

That may be true, but fascism has a very poor track record as a replacement. Some historians argue that strongmen of the past who were sometimes identified with fascism, like Franco and Ataturk—whose harsh, swift brand of nationalistic transformation inspired Hitler, according to the historian Stefan Ihrig’s 2014 book, Ataturk in the Nazi Imagination—succeeded in the end only because they outgrew those tendencies.

Ataturk also pursued long-term plans for national transformation that brought in best practices from Western nations—he hired the famed U.S. educator John Dewey, for example—and even programmed in the return of democracy. Those leaders, in other words, had larger, detailed programs of the kinds that elude Trump. His instincts may be fascist, but he has shown little or no greater purpose other than manipulating the truth to his political benefit and rousing his poorly educated white base.

“His stupid, careless talk is not really fascist but conceivably subfascist,” said Stanley Payne, a well-known historian of European fascism at the University of Wisconsin-Madison. “Both Hitler and Mussolini spoke more toward theoretically coherent goals.”

Even Spain’s Franco, the military strongman who toyed with fascism as Hitler and Mussolini rose to dominance in Europe, abandoned it in the end for a more pluralistic system, some historians contend. “The Franco regime in its full form, from 1945 to 1975, was not fascist,” said Payne, a specialist in Spanish fascism. “A distinction should be made between the Catholic, corporatist, quasi-monarchist system of ‘mature Francoism’ and the semi-fascist phase of 1937-45. Francoism lasted so long that it was more than one thing, though the non-fascist form predominated.”

In an interview, Ihrig, a historian at the University of Haifa, said Trump is plainly deploying fascist tactics of the past, but he added: “The United States is not Weimar Germany. True, we always need to be worried. He is using the classic methods: destroying checks and balances, influencing the legal system to one side, polarizing society and playing with the notion of truth—making it inoperable. These things are really worrisome, but rather than being a fascist himself, I think Trump is more like one of these authoritarian kinds of conservative figures, like in late Weimar Germany, who allied with the Nazis to change the system.”

Whatever Trump’s true nature or aims, such alliances are necessary for fascists to succeed. Like Putin, who today is  deploying a form of fascism by controlling corporate Russia, Hitler and Mussolini gained power by manipulating conservative and corporate elites who believed, with tragic consequences, that they could control the emerging dictators. The backing of such elites is crucial for fascists to last more than a few years in power because the “corporate oligarchy craves a certain kind of stability,” Stanley said. “This, together with the support of social conservatives who are made to fear nonexistent threats, can and does leave fascism in power in the face of conflicts with reality.” 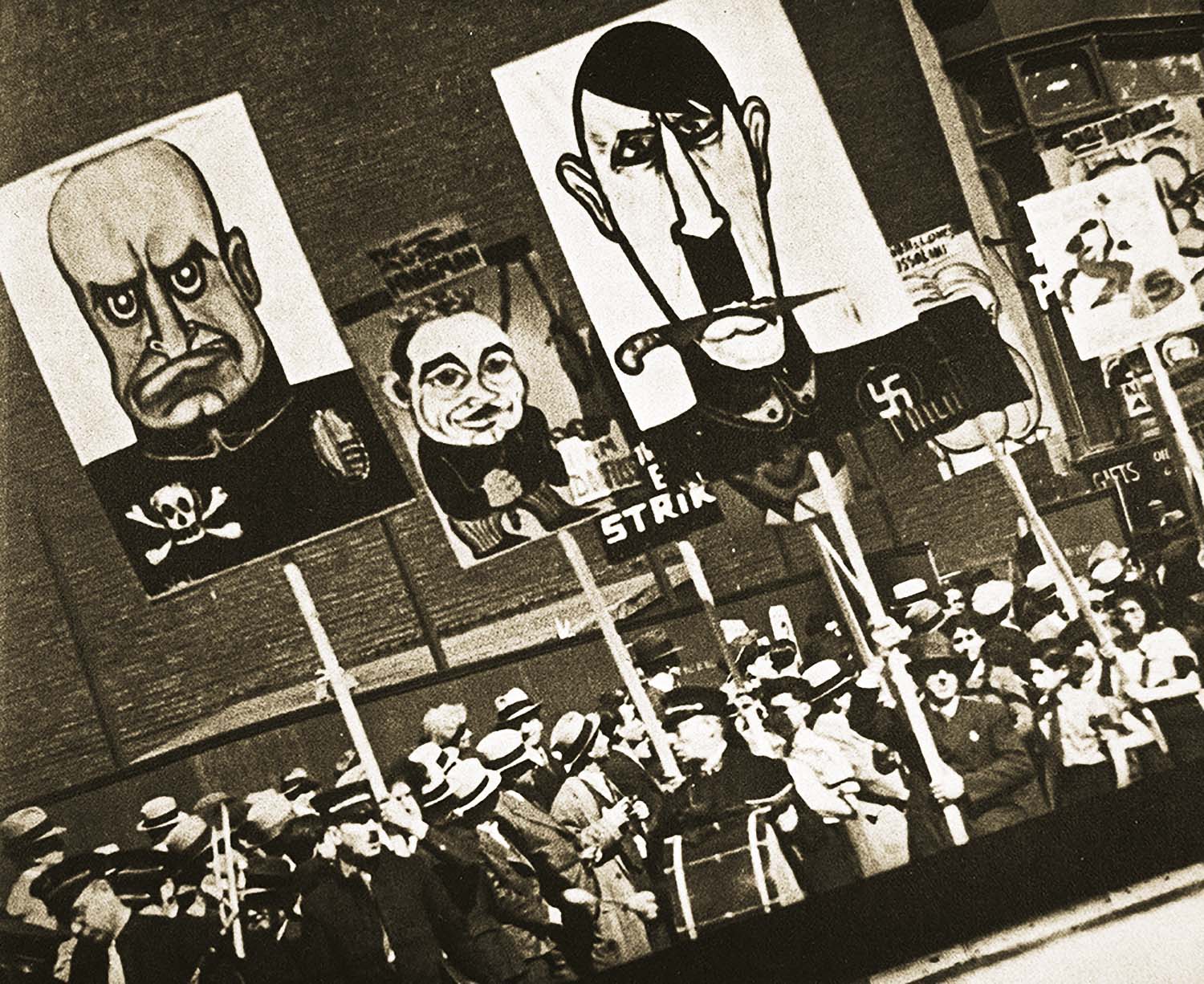 Marchers hold placards with satirical portraits of Mussolini and Adolf Hitler during a May Day parade near Union Square in New York in the early 1930s. Historica Graphica Collection/Heritage Images/Getty Images

Such a support base does not exist to nearly the same degree for Trump. While he has tried hard, especially during the coronavirus pandemic, to enlist and win over corporate America, he has created just as many enemies among the U.S. corporate elite. And from Wall Street to Silicon Valley, America’s business leaders are far more independent than in, say, a country like Russia.

Beyond that, American democracy is 244 years old and not nearly as vulnerable as the young and fragile democratic systems that existed in Weimar and the Italian republic of the early 20th century. America’s constitutional checks and balances, though seemingly strained to the breaking point—as we saw during Trump’s impeachment and acquittal—are far more in evidence than in the case of other fascist takeovers. Even the majority conservative Supreme Court has curtailed some of Trump’s ambitions, ruling most recently that he is not above the law in requiring him to release his financial records to prosecutors. And the military establishment, which in previous fascist history bent much more willingly to the designs of autocrats in power, has made a stand for constitutional restraints as well. Following the killing of George Floyd in May, Trump’s own defense secretary and Joint Chiefs of Staff chairman very publicly distanced themselves from him as he sought to enlist them in his campaign for “law and order” in the face of civil unrest.

Still, Ihrig cautions against complacency. Even though it is nearly two and a half centuries old, American democracy has not yet been fully tested against freshly malign forces like cyberattacks, the historian argues in a forthcoming book. This is especially true since the end of the Cold War, which he compares with the unstable interwar period of the 20th century that led to fascism. “With the end of the Cold War, certain restraints to the left and right of the spectrum as well as a more general consensus on politics and society disappeared,” Ihrig said. “If you take away times of war (World War I, World War II, and the Cold War) as well as those in which major parts of society were excluded or underrepresented (women, minorities, also workers in some systems, etc.), then democracy did not have too much time to play out its battles with heavily opposing forces, to test itself, and to come up with a range of successful strategies of coping with fundamental opposition.”

Payne said fascists can and do last in power if they don’t go overboard; the problem for them is they usually do. “Historical fascism worked very well so long as its leaders stayed out of big wars,” he said. “From 1922 to 1940, Mussolini could hardly be described as other than successful. From 1933 to 1939, Hitler had the greatest six years of any leader in German history. Big wars did them in, as they did to many other leaders.” Trump has already started a global trade war that is going nowhere and threatened real war against Iran and North Korea. And most scholars would argue that, by its nature, fascism is born of megalomania, which in turn chooses war and ultimately self-destructs.

July 22: This story was updated to include Trump’s threat to send in federal forces.