Offline and Out of School

In India, education under lockdown and a deep digital divide threaten to undo real progress in rural areas.

For the past few months, 10-year-old Prachi Kadian’s ability to attend school has hinged on a seemingly small piece of fortune: Her father has a smartphone. That means Prachi can watch and read the lessons that her schoolteacher sends via WhatsApp each day. Shyamvir Kadian, a farm laborer in the Indian state of Haryana, is the only one in his family with a phone. Before he heads out for work each morning, he passes it to his daughter to look up her assignments. When he returns in the evening, she photographs pages of completed work and messages them to the teacher, sometimes speaking to her on the phone to go over particularly tricky lessons.

Prachi hasn’t met or spoken to a single friend since educational institutions closed across India in March in the face of the pandemic, and she misses school desperately. But because she is able to access her father’s phone, Prachi is one of India’s luckier students.

Even as India lifted its countrywide lockdown last month despite the surging coronavirus pandemic—only the United States and Brazil have recorded more cases—schools have yet to physically reopen. The central government has said that remote learning will continue until at least August—though many schools are likely to stay closed for much longer—and has pinned its hopes on technology. Since the start of the pandemic, the government has been updating its existing e-learning platforms with content and QR-coded textbooks for multiple languages, classes, and states. EdTech companies are reporting record increases in user registrations, engagement, and revenue during lockdown. But despite all the bustling plans, there is a looming problem: India has a massive digital disparity.

While internet penetration has grown across India, thanks to the ubiquity of cheap, mobile phones, rural users lag behind their urban peers—who are more likely to be English speakers and relatively economically advantaged. About 30 percent of the rural population has internet access, compared with more than half of urbanites, according to the latest data from IAMAI-Nielsen. In large cities, that figure rises to 65 percent. Cutting through these axes is a marked gender divide. Among all internet users, just 35 percent are women. This digital disparity mirrors other challenges girls face in accessing education. (According to the last census in 2011, India has a female literacy rate of 65 percent compared with a male literacy rate of 82 percent.) 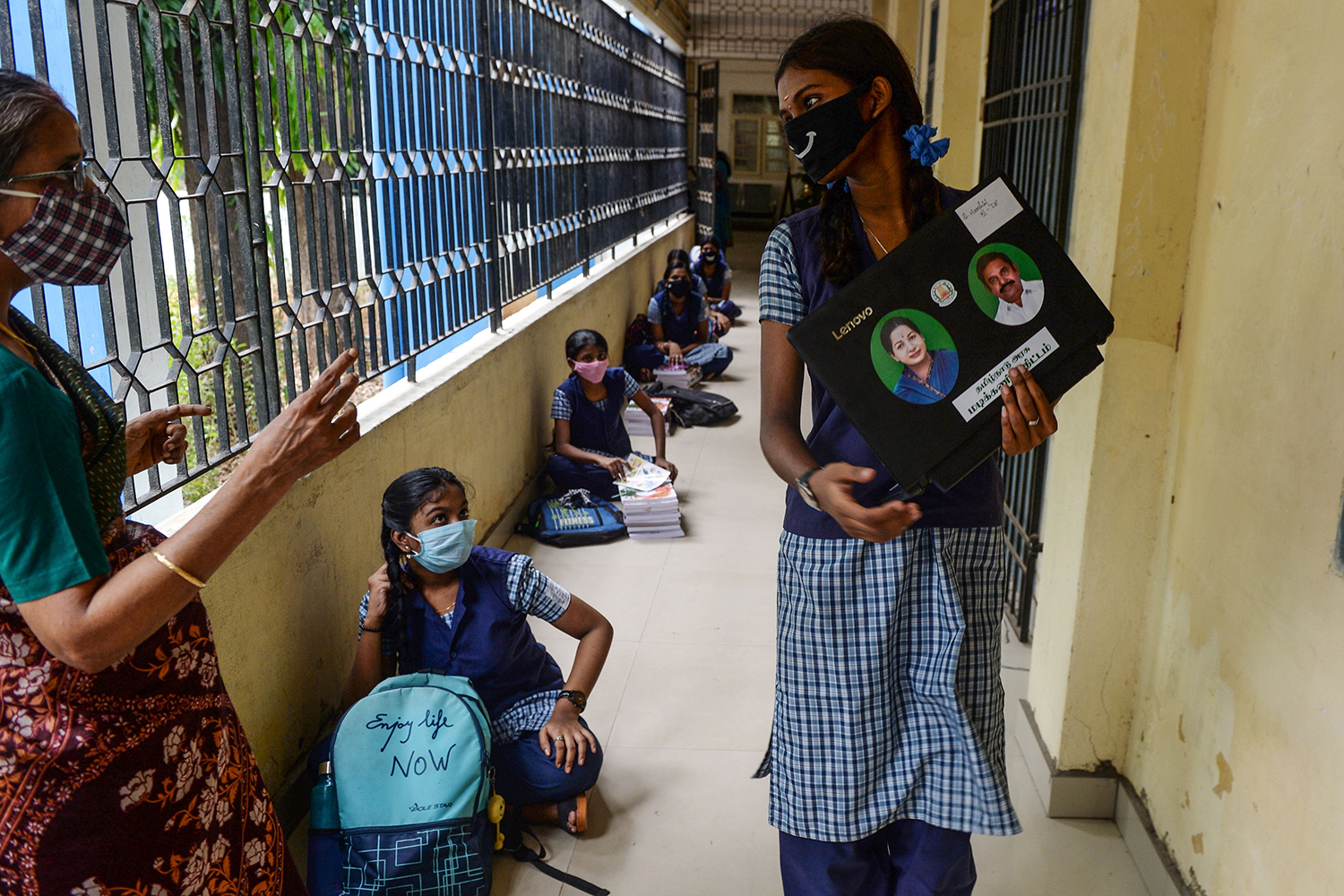 A student carries a laptop to download study materials as others line up to collect textbooks before a telelearning class at their home in Chennai on July 15. ARUN SANKAR/AFP via Getty Images

India has among the world’s highest gender gap in access to technology. Only 21 percent of women in India are mobile internet users, according to GSMA’s 2020 mobile gender gap report, while 42 percent of men have access. While there are economic barriers to girls’ owning a mobile phone or laptop, cultural and social norms also play a major part. The male-female gap in mobile use often exacerbates other inequalities for women, including access to information, economic opportunities, and networking.

Why Google and Facebook Are Racing to Invest in India

It’s not just about tapping into a growing digital market. Indian companies are expanding Western partnerships to keep China out.

A Portrait of India on Fire

Megha Majumdar’s bestselling novel “A Burning” begins with a train in flames. But what really gets torched is the Indian Dream.

In India and around the world, community health workers are being rerouted to deal with the pandemic—with dangerous results.

In states like Haryana, where mobile and internet usage is relatively high, teachers have had to make a special effort to ensure that girls are allowed to access online classes. Some parents fear mobile phones can pose a risk to a girl’s reputation or view the internet as a potential distraction from a daughter’s daily chores. For Priyanka, a government teacher who goes by one name, it took multiple conversations with parents like Prachi’s and community leaders before she was able to convince them that daughters should be permitted to use phones to study. It meant convincing some parents—primarily cellphone-owning fathers—to allow their daughters’ friends to use their phone as well, to schedule follow-up phone calls with the teacher, often at nights after they have returned home from work.

Every day, Priyanka spends hours on Sampark Baithak—an app launched by the Haryana government alongside the nonprofit Sampark Foundation. She studies their educational content and commentary from other teachers and tries to figure out ways to teach efficiently over the phone, to students with and without the internet. “These are girls who do not get as much freedom, but they are striving hard to get ahead in life,” she said. “With some additional effort it’s possible to keep them from dropping out.” 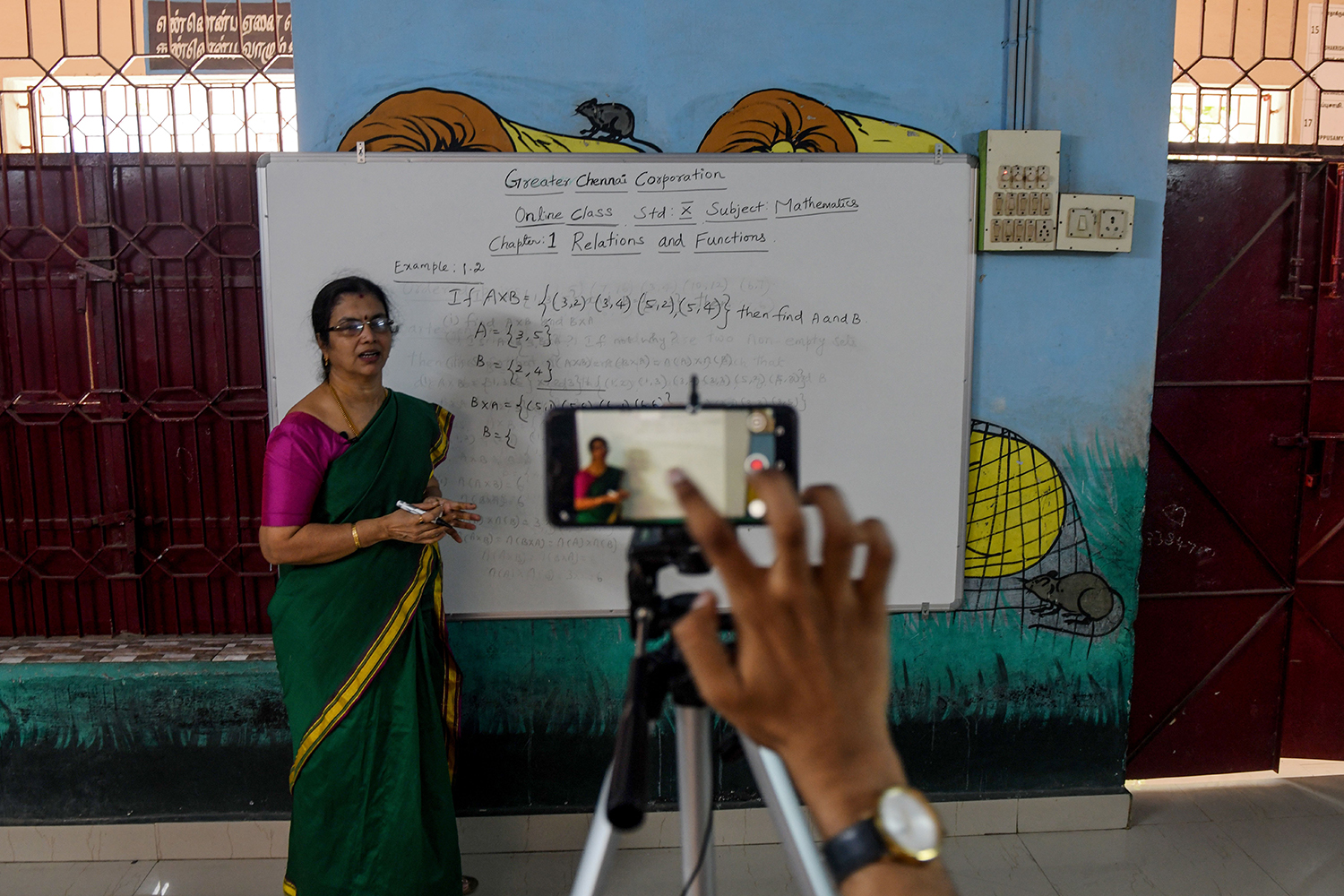 A teacher gives a livestreaming online class at a government school in Chennai on June 3. ARUN SANKAR/AFP via Getty Images

But as online classes become more entrenched, it’s apparent that superhuman efforts by individual teachers and content-rich apps won’t be enough. When a think tank carried out a telephone survey on online school access in the eastern state of Bihar, more than half the schoolgirls were unreachable to begin with. Among those that it did reach, about half said their families weren’t in a position to afford internet packages or use the phone to study. Some 36 percent of boys said they had phone access compared with 28 percent of girls.

That stands to worsen the gender gap in Indian schools. While 99 percent of girls enroll in primary school compared with 97 percent of boys, the gap widens as students grow older. Family constraints, distance to school and physical safety threats, insufficient access to menstrual hygiene, and gendered expectations around housework have left girls lagging behind on educational opportunities. Compared with 35 percent of boys, nearly 40 percent of adolescent girls in India are not enrolled in any education institution. These trends solidify later in employment: At 24 percent, India has one of the lowest global rates of women in the workforce.

With girls standing to be the worst affected by the shift to online schooling, some educators have pushed back at the government’s initial grand technological efforts. Activists like Nishant Baghel, who leads digital initiatives at the education nonprofit Pratham, are urging the government to use so-called outdated technology like radio, SMS, and television as it draws up its ambitious coronavirus schooling plans. If internet coverage is out of reach to many in rural India, television is a more widely available medium. About half of rural households and more than two thirds of urban households own a TV. Unlike phones, which are usually owned by male heads of households and carried along to work daily—limiting their availability—TV sets remain at home. These classes allow students to view high quality, visual content which can be easier to consume and retain. And, most importantly, such classes can be viewed by multiple students at once. 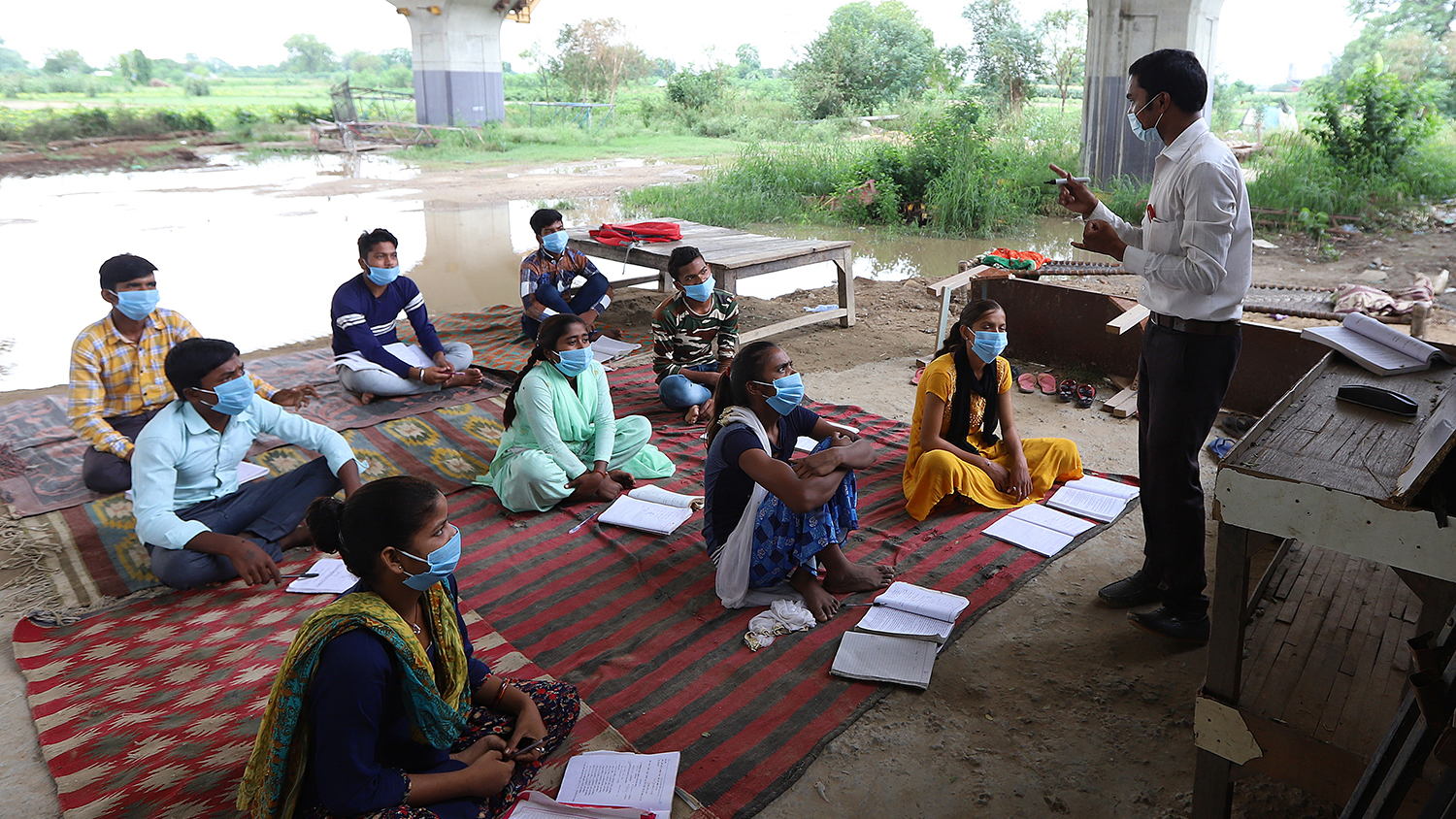 But even within TV-focused education programs, students have struggled with access. In Kerala, education officials estimated at the start of the June term that about 250,000 students had no access to the internet or television. The same month, a 15-year-old scholarship student whose parents lacked a phone and couldn’t afford to repair their television died by suicide. Local media claimed she was upset about falling behind on her schoolwork.

The high-profile tragedy resulted in a statewide mobilization by the government, political parties, business owners, private institutions, and citizens who contributed smartphones, computers, and televisions. The state government has started rolling out “neighborhood learning centers” with TV sets set up in common spaces—such as libraries and childcare centers—where students can gather to attend the virtual lessons. Kudumbashree, Kerala’s poverty eradication and women empowerment program which has more than 4 million members, came up with a scheme to provide subsidized laptops to students that can be paid for in installments.

Governments and educators have also considered radio, an even more widely available medium. Community radio stations have played a critical role in raising coronavirus awareness in far-flung and underdeveloped areas, and audio lessons are also following suit. The government announced in May that it would attempt to use an estimated 289 community radio stations to provide school education. All India Radio, the state-owned public radio service, is providing daily lessons in several parts of the country, including the hilly areas of Jammu and Kashmir, where the government has banned high-speed internet. In Nagpur district of Maharashtra, students can tune in to 15-minute long radio broadcasts twice a week which include educational activities and topics of discussions for their parents. 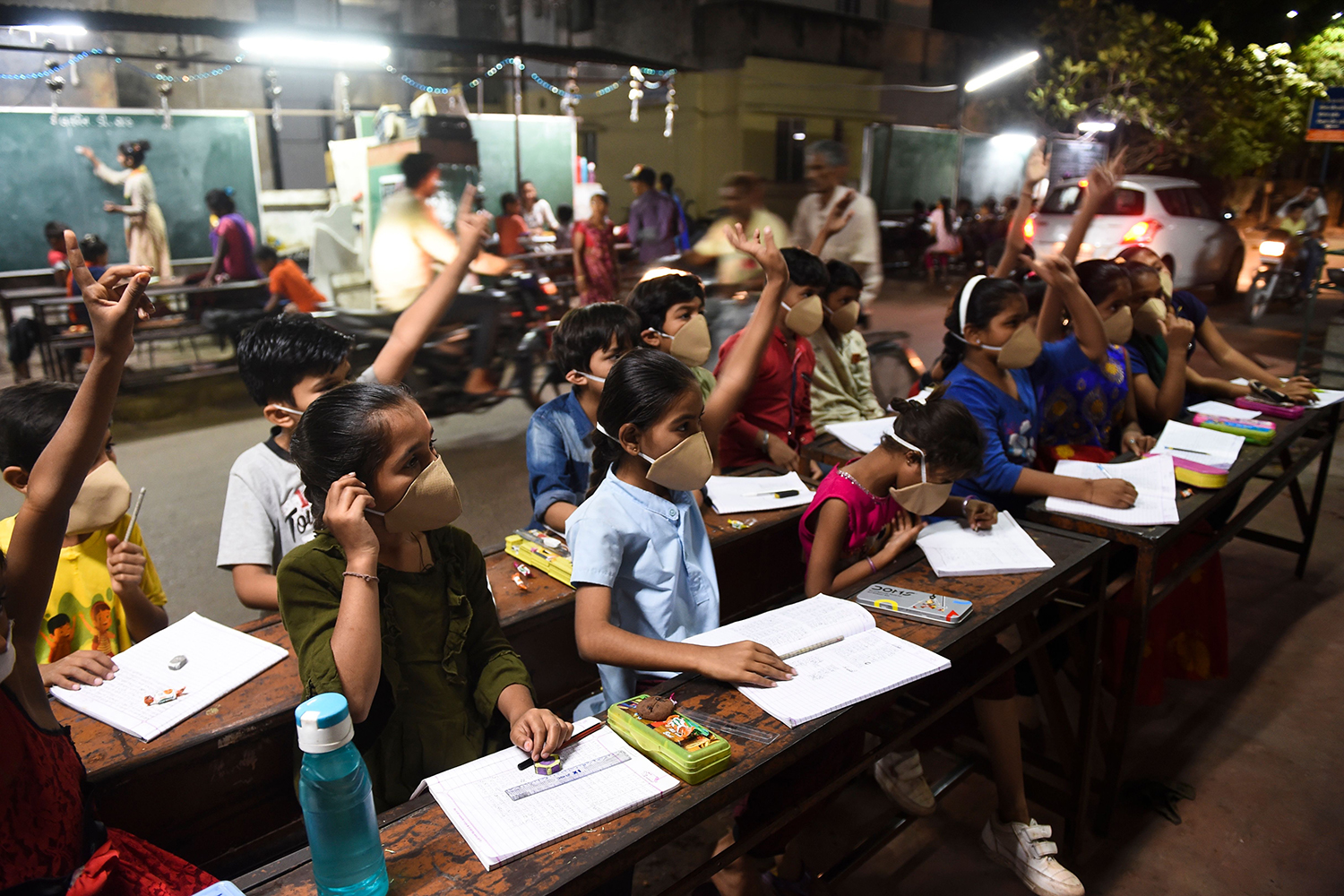 Students wear free face masks amid concerns over the spread of the coronavirus at the Footpath School in Ahmedabad, India, on March 19, early in the pandemic. SAM PANTHAKY/AFP via Getty Images

The goal is to keep children engaged in learning, even in the absence of textbooks and without the need to leave their neighborhoods. A sample lesson might explain a science concept using their village surroundings or encourage something like counting the number of rotis being cooked for a meal, and mothers usually facilitate the teaching. These lessons are done in conjunction with basic mobile phones to ensure retention. The education NGO Pratham sends reading material via SMS ahead of each lesson and offers a follow-up call after to ensure that children have understood the explained concepts.

In some communities, educators have taken it upon themselves to offer truly offline alternatives. In the states of Chhattisgarh and Jharkhand, several villages now provide lessons over loudspeakers. Teachers run classes as they normally would, except they sit inside a room on their own, a microphone in hand, as students gather in a designated spot with their notebooks to learn. Some teachers and village heads broadcast audio content created by education nonprofits to supplement these classes.

These efforts show just how steep the obstacles are to universal schooling. With the world’s second largest internet user base and the biggest presence on social media sites, India is one of the world’s most important digital markets. But this isn’t a uniform trend across the subcontinent: Digital access has yet to become a reality for many of its residents. Google just announced a $10 billion investment to digitize India, promising affordable internet access in different languages. The tech giant already has an ongoing program in the country that aims to provide digital literacy to rural women and claims to have reached 26 million of them. In the past, states have launched schemes that provided mobile phones to women in households below the poverty line, and to college students, with the promise of increased connectivity and benefits. But as communities across the country begin their new, remote terms with no small amount of trial and error, it’s apparent that such initiatives fall short of need. The pandemic has exacerbated inequalities and challenges that already existed for girls in India. If the government hopes to save them from falling irretrievably behind, it must focus on foundational skills and literacy, stressed Baghel of Pratham, and not try to achieve curriculum for the academic year as schools remain shut. During these unprecedented times, it is imperative to keep the students engaged in learning and development so they are well equipped when schools do reopen.

Sarita Santoshini is an Indian journalist.