Big Tech Faces Off With Congress

As pressure grows on the four tech companies, many are increasing their spending on lobbying.

At noon today in Washington, four of the world’s most powerful tech leaders will testify before a U.S. Congressional committee investigating whether their companies have become too dominant in their respective markets. The CEOs of Amazon, Apple, Facebook, and Google will all testify via video conference. It will be Amazon CEO Jeff Bezos’s first time appearing before Congress.

The hearing has been called by the antitrust panel of the House Judiciary Committee and is part of a year-long investigation into possible monopolistic practices of the tech giants as Chairman David Cicilline, a Democrat, attempts to build a case for updating current U.S. antitrust laws.

Appitol Hill. All four companies are immensely profitable, and any effort to break them up or impose onerous regulations will be fought aggressively by a sector becoming more and more at home in Washington. Since 2014, the amount Amazon has spent lobbying the U.S. government has more than tripled and overtook the spending of Alphabet—Google’s parent company—in 2019. 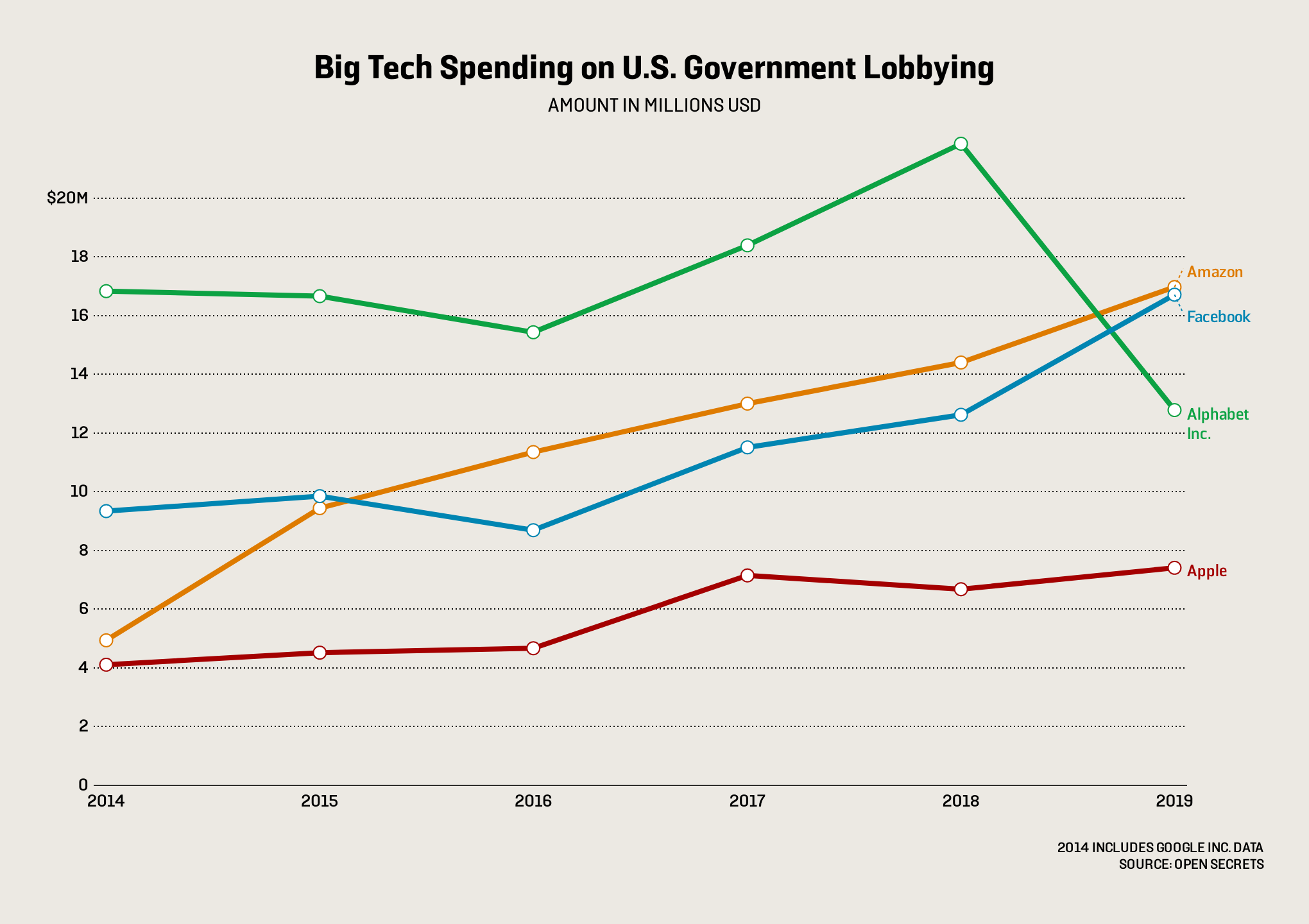 What they’ll say. Despite user bases in the billions, expect each tech leader to play down their company’s dominance (and in Mark Zuckerberg’s case, talk up TikTok’s competitor status). Although the hearing is ostensibly about antitrust, expect Republican lawmakers to bring up perceived censorship of conservative views on web platforms and Democrats to raise concerns about disinformation headed into the U.S. presidential election.

Taliban calls cease-fire. The Taliban has announced a three-day cease-fire during the Islamic holiday of Eid al-Adha, with the suspension of hostilities scheduled to begin this Friday. Separately, Afghan President Ashraf Ghani has  suggested peace talks are imminent, based on his government nearing an agreed number of prisoner releases. “With this action, we look forward to the start of direct negotiations with the Taliban in a week’s time,” Ghani said. The decision comes as U.S. special envoy Zalmay Khalilzad is due to visit Afghanistan this week.

Russian and U.S. officials meet for nuclear talks. Working groups of government experts from Russia and the United States meet in Vienna today to begin three days of talks on the topic of nuclear arms control ahead of the expiry of the New START agreement. The meetings follow negotiations between U.S. arms control envoy Marshall Billingslea and Russian Deputy Foreign Minister Sergei Ryabkov in June.

U.S. admits to killing civilian in Somalia. U.S. Africa Command (Africom) has admitted to killing one civilian and injuring three others in a February 2 airstrike in Somalia. It is only the second time Africom has admitted to killing civilians in its Africa operations since it began reporting. The strike took place near Jilib, an area south of Somalia’s capital Mogadishu. The Feb. 2 killing had been highlighted in a report by Amnesty International in March, and at the time U.S. officials maintained that only terrorists had been killed in the operation. Africom’s commander, Gen. Stephen Townsend said the military did not intend to target civilians in their operations against al-Shabab. “We work hard to prevent civilians from getting hurt or killed during these operations designed to bring increased security and stability to Somalia,” Townsend said.

Powell’s view on economy. The monthly meeting of the U.S. Federal Reserve’s Federal Open Market Committee, which sets U.S. interest rates, takes place today in Washington. Although rates are expected to remain unchanged, Fed chief Jerome Powell’s subsequent press conference should give an insight into the direction central bankers see the U.S. economy going in the coming months and whether more intervention is needed.

Australia to increase cooperation with U.S. Australia has agreed to “increased and regularized maritime cooperation” with the United States in the South China Sea and the Indian Ocean following a meeting between the countries’ top defense and foreign-policy officials. The declaration does not mean Australia will join U.S. freedom of navigation operations in the disputed sea, a practice that Beijing deems provocative. Australian Foreign Affairs Minister Marise Payne told reporters that Australia has “no intention of injuring” its relationship with China, its number one trade partner. A joint statement also announced the formation of a U.S.-Australian working group to “respond to disinformation efforts” in the region.

Biden to announce running mate. Former Vice President Joe Biden, the Democratic party nominee for president told reporters on Tuesday that he will announce his choice of running mate by next week. Biden has promised to choose a woman for the role, although there is not yet a clear frontrunner. On Tuesday, Biden was photographed with handwritten notes with a list of positive talking points about California Senator Kamala Harris. Politico also accidentally published a page on its website which named Harris as Biden’s running mate, before it was swiftly updated and the claim was removed.

In a development that may have been more welcome in the earliest stage of lockdown, when bread-baking and gardening were in vogue, residents in more than a dozen U.S. states have reported receiving suspicious packages of seeds, apparently from China. The U.S. Department of Agriculture is investigating the mystery, and has advised anyone who has received the seeds to refrain from planting them. It is speculated that the seeds may have been part of a “brushing” scam, whereby products are shipped to unwitting addressees in order to create a fraudulent (but authentic-looking) review online in order to drive sales. “At this point in time, we don’t have enough information to know if this is a hoax, a prank, an internet scam or an act of agricultural bio-terrorism,” Ryan Quarles, the Kentucky agriculture commissioner, said.

NEW FOR SUBSCRIBERS: Want to read more on this topic or region? Click + to receive email alerts when new stories are published on Russia, Afghanistan

The United States thought Afghans would fight and Ukrainians would fold. Reality is forcing a reassessment.

Lawmakers in one of the world’s leading democracies are scratching their heads over a power grab that doesn’t quite add up.

Although African leaders are already sending their congratulations, legal challenges to the result are expected.