A year after the state’s special status was revoked, peace remains a distant hope.

SRINAGAR, Jammu and Kashmir—Over the past year, life in Indian-administered Kashmir has grown markedly more challenging. On Aug. 5, 2019, New Delhi revoked Article 370—which had guaranteed a measure of autonomy for the state of Jammu and Kashmir. Thousands of Kashmiris were arrested on vague charges, and the government enacted a strict curfew and the world’s longest internet blackout.

Article 370 had allowed India’s only Muslim-majority state to have its own constitution, a separate flag, and freedom to enact its own laws, such as rules barring outsiders from purchasing property. In revoking the constitutional amendment, the Indian government claimed the move would bring peace and development to the region.

Instead, the past year has only brought more violence and uncertainty. Even during the coronavirus pandemic, when many conflicts have been on hold amid the United Nations’ call for a global cease-fire, New Delhi has intensified military operations in the region—striking out against Kashmiri separatists fighting for self-determination.

This is nothing new for Indian-administered Kashmir, which has long been considered the world’s most militarized zone. Conflict in the region has been ongoing since 1947, when India and Pakistan gained their independence from the British and the brutal attendant partition left Kashmir a disputed territory between the two. Two wars have since been fought over Kashmir, and countless skirmishes have erupted within the territory itself. In Indian-administered Kashmir, meanwhile, varying groups of militants have fought for independence or a merger with Pakistan. India, for its part, has long accused Pakistan of fomenting these militant movements and inciting terrorist elements within the state. Decades of clashes between Indian security forces and Kashmiri insurgents have hit civilians the hardest; forced disappearances, torture, rape, and a brutal response to protests have become a normal part of life. Between 1990 and March 2017, at least 41,000 people were killed, including some 14,000 civilians.

This year alone, at least 143 militants have been killed, with 62 deaths in June alone, according to a report by the Jammu Kashmir Coalition of Civil Society and the Association of Parents of Disappeared Persons. Civilians, too, are caught in the fighting, with 32 killed in the first six months of this year. On June 26, a 5-year-old was killed in the crossfire between suspected militants and Indian paramilitary forces. A 65-year-old was killed on July 1 in northern Kashmir in front of his 3-year-old grandson, who said he was shot by Indian forces—though the police refuted the claim, saying he was killed by militant crossfire. 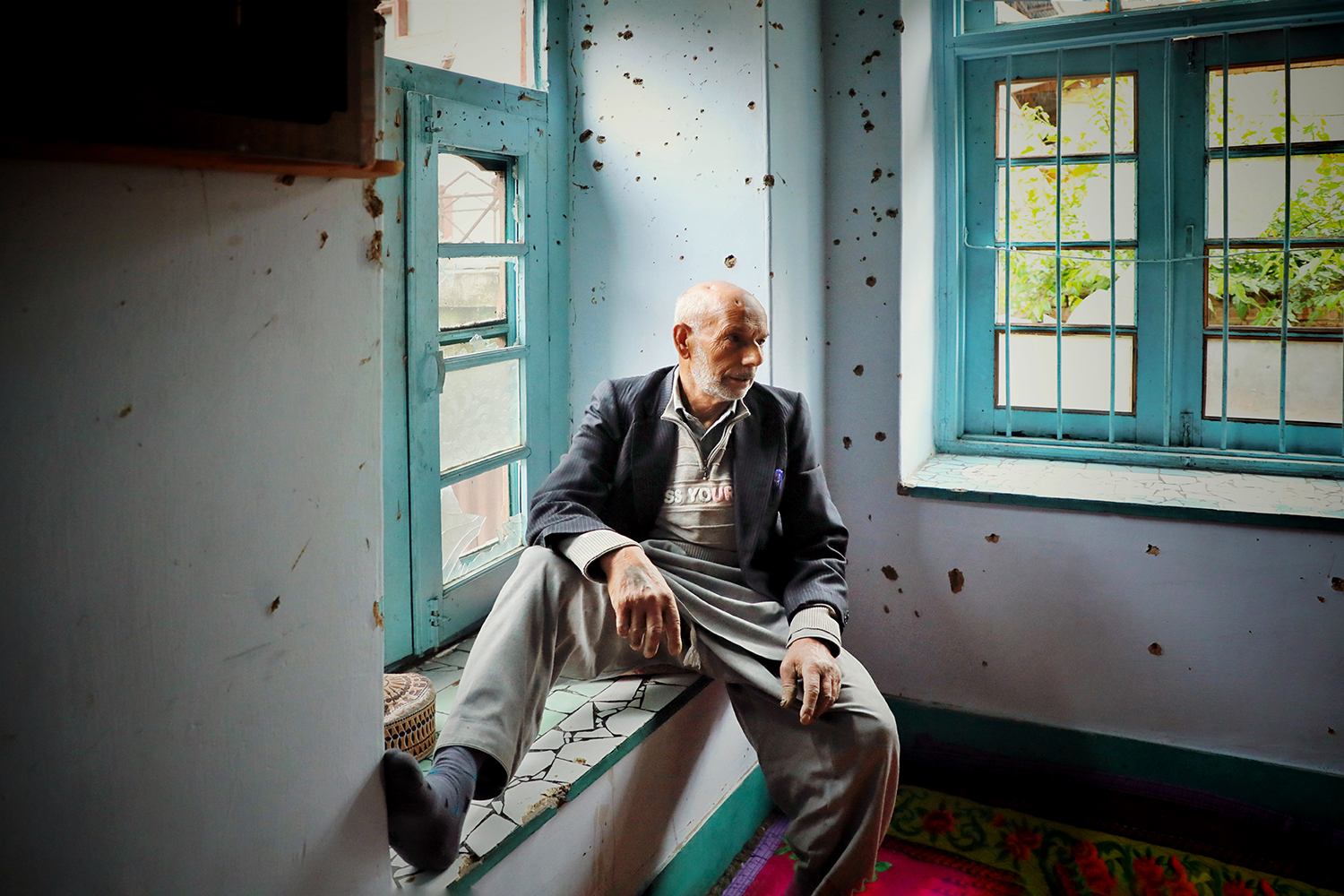 Ghulam Mohammad Najar sits on a window sill observing the damage to his home in Nawakadal on May 31.Sharafat Ali for Foreign Policy

Renewed violence has left scores homeless, a double tragedy for families trying to protect themselves from COVID-19. More than 50 homes have been destroyed or badly damaged over the past year. And of that count, as many as 22 of them were damaged on May 19.

On that day, Indian armed forces launched a cordon and search operation (CASO) in the Nawakadal area of downtown Srinagar. Such operations are carried out by Indian forces in conjunction with local police to work through a particular area in which militants are suspected to be hiding. Residents say the tactic usually involves widespread harassment of ordinary citizens, who are frisked, questioned, and have their homes searched with little or no cause. The operation, which involved the commander of one of the known militant outfits, turned into a particularly fierce battle between Indian forces and Kashmiri militants. After a 12-hour battle involving guns and explosives, two militants were killed. Three civilians later died due to unexploded ordnance left in the area. The Nawakadal encounter was the first battle in downtown Srinagar in two years. 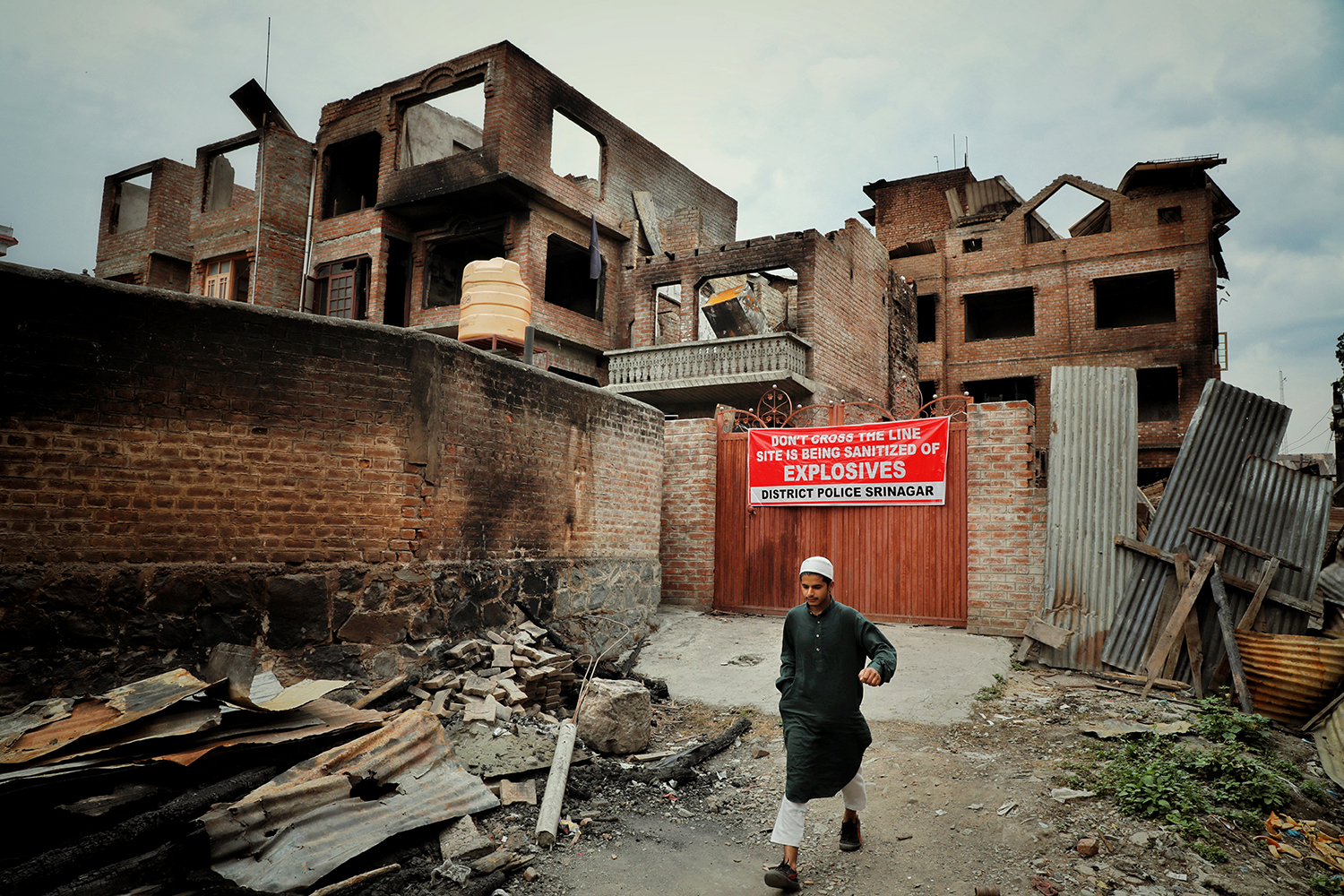 A local walks near the site where 22 houses were destroyed by Indian Armed Forces during an encounter with militants in Nawakadal, Srinagar, in Indian-administered Kashmir on May 29. A warning sign was placed at the site after three civilians died in an aftermath explosion. Sharafat Ali for Foreign Policy herey

Days after the fighting, buildings still smoldered, and the smell of smoke was sharp in Nawakadal, Srinagar’s oldest neighborhood. In the narrow lanes, some families were cleaning what little they could salvage from the ruins. Others had left without taking anything—their homes were completely gone.

While his father looked around the ruins of their home, 20-year-old Yamin Najar recounted the intensity of the violence. “It was like we were suddenly brought to a battlefield. Twenty-two homes and a bakery were burned down in a matter of a few hours. Now some families left to live with their relatives, but most of them have rented apartments. I wish it was a nightmare and I would wake up in the comfort of my bed. But we all know that’s not happening.”

Najar’s grandfather, Ghulam Mohammad Najar, 78, recalled how hard he had worked to build the family home. “For more than 50 years, I have invested my blood and sweat to build my home. Now everything is lost, even housing and bank documents,” he said.

Among the civilians who were stuck by explosives after the fighting ended was 13-year-old Basim Aijaz Khachoo, who died in the hospital the following day. Khachoo, a beloved only child, was born six years after his parents were married. On the day of the fighting, he had left home to visit his friends across the road. “He called me from his friend’s home and said there are forces outside on the streets. I told him to remain there and not to come home until they are gone,” said Khachoo’s mother, Kounsar, speaking in her kitchen, sitting alongside her husband. Later, two boys on bikes appeared at her door carrying Khachoo’s phone, filled with photos of her injured son. “They told us Basim was in the hospital. I don’t remember how we reached it. I saw my son’s torn Eid dress, which he insisted on wearing that morning.” 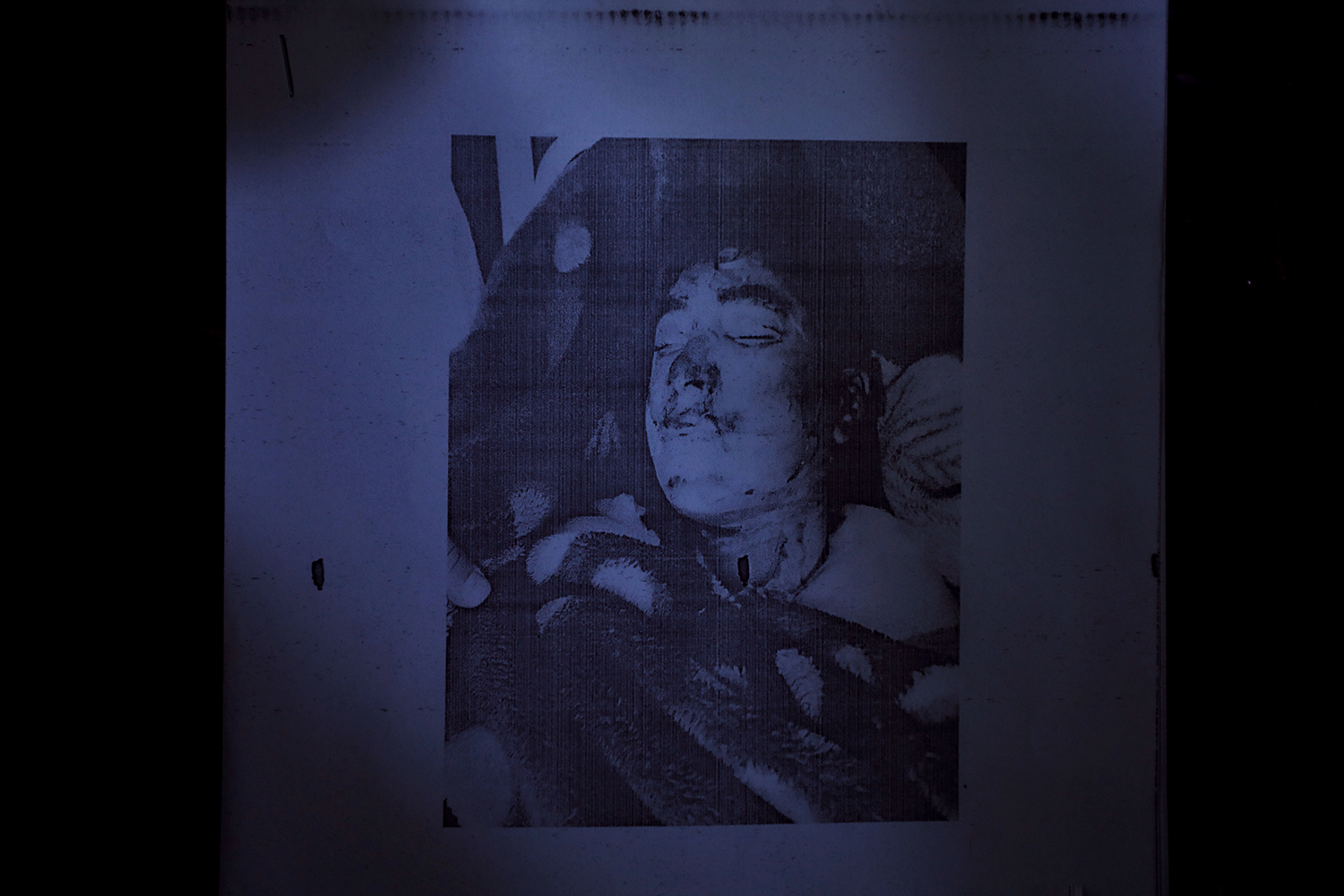 A photo from a medical examiner’s death report shows the burned body of Basim Aijaz Khachoo, a 13-year-old who died from injuries received in the aftermath explosion in Nawakadal.Sharafat Ali for Foreign Policy

At the hospital, doctors informed Khachoo’s father, Aijaz, that the boy had second-degree burns and both his kidneys had shut down. When Aijaz asked doctors to take his kidney and save his son, the doctors replied: “Whatever you will do, he will not survive.”

“Basim was our only hope. When he was born, we finally had a relief that someone will be there to shoulder our dead bodies. We never knew we would be carrying him to his grave at his young age,” Aijaz said.

The night before the showdown, CASO soldiers had started searching the area looking for militants. When they came to the home of clothes vendor Farooq Ahmad Sofi, they ordered the family to let them in. “The forces came in and were all over the place. My brother was frisked and questioned if he carries any weapon,” recounted Madeena Farooq, Sofi’s daughter. The family was held in one room for the whole night. In the morning, soldiers told them the area wasn’t safe and ordered them to leave their home. By the evening, they were homeless—left with only the clothes they had been wearing. “My parents had bought jewelry and clothes for my marriage. We were not given any chance to collect them. After the attack, we just found one earring—that, too, was turned into a piece of coal,” Farooq said, pointing out a burnt safe in the rubble of her family home. 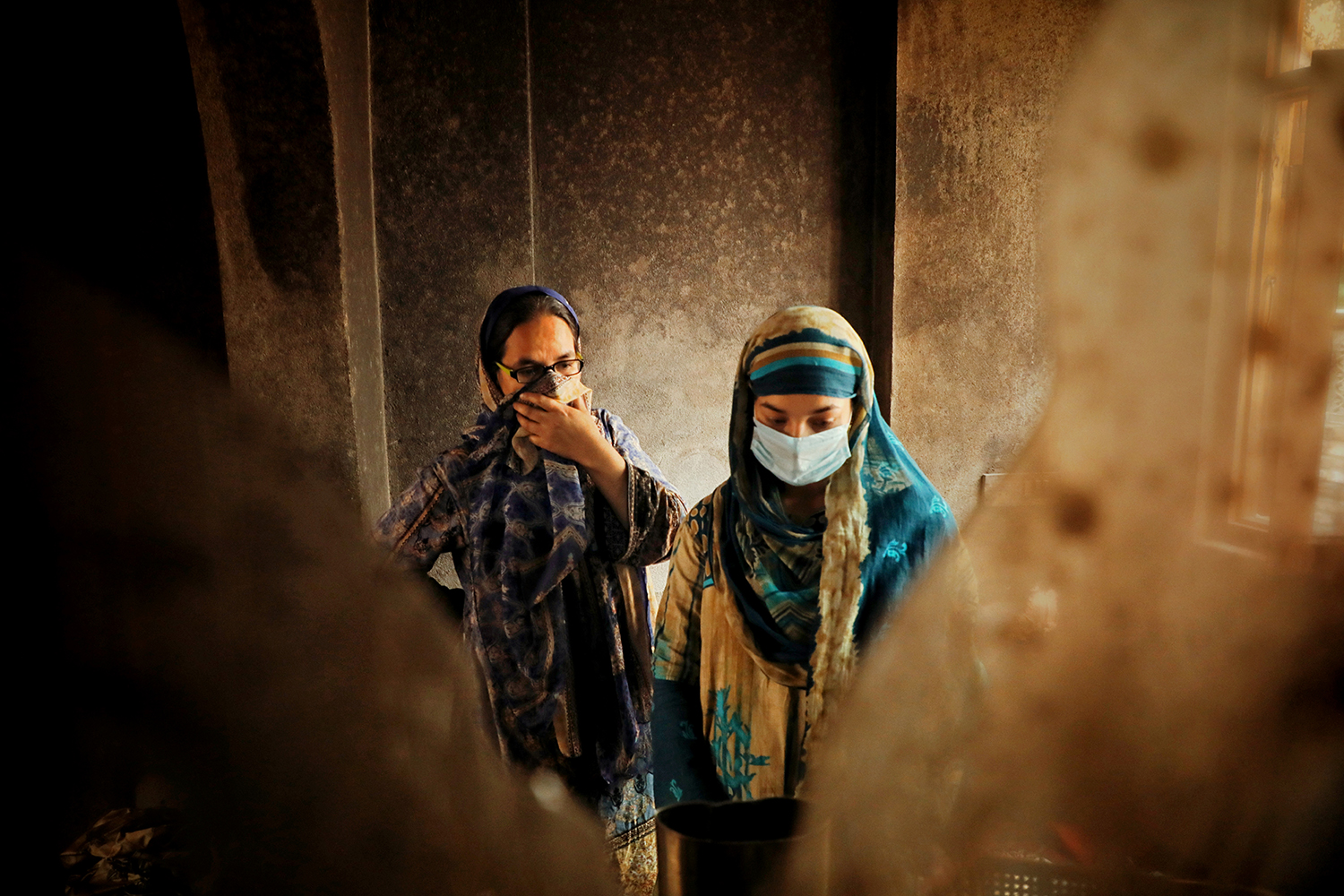 Madeena Farooq with her mother, Mubeena Farooq, look through the ruins of their home in Nawakadal to see if any of the jewelry or clothes they had bought for the daughter’s marriage could be salvaged on May 29. Sharafat Ali for Foreign Policy

A recent graduate who planned to pursue a master’s degree in commerce at the University of Kashmir, Farooq said she would likely have to stop her education. “I don’t know how I can continue my studies without a home to live in.”

In fact, education has been particularly difficult since the abrogation of Article 370. For seven months after Kashmir went into lockdown last year, nearly all private and government schools were closed down, leaving 1.5 million students in limbo. Those schools began reopening in early March, only to be shut down once again three weeks later, when India went into lockdown to prevent the spread of the coronavirus.

Tenth grader Salik Gandroo had been studying at home for most of the past year. Now he and his younger sister have lost what seemed like their final safe space. “This year was very crucial as I was preparing for my exams and have lot of pressure to pass my finals. My room was on the first floor, and all my study materials and notes were lost to fire. I saw my bag, and when I touched it, all I could hold in my grip was ashes,” Gandroo said. 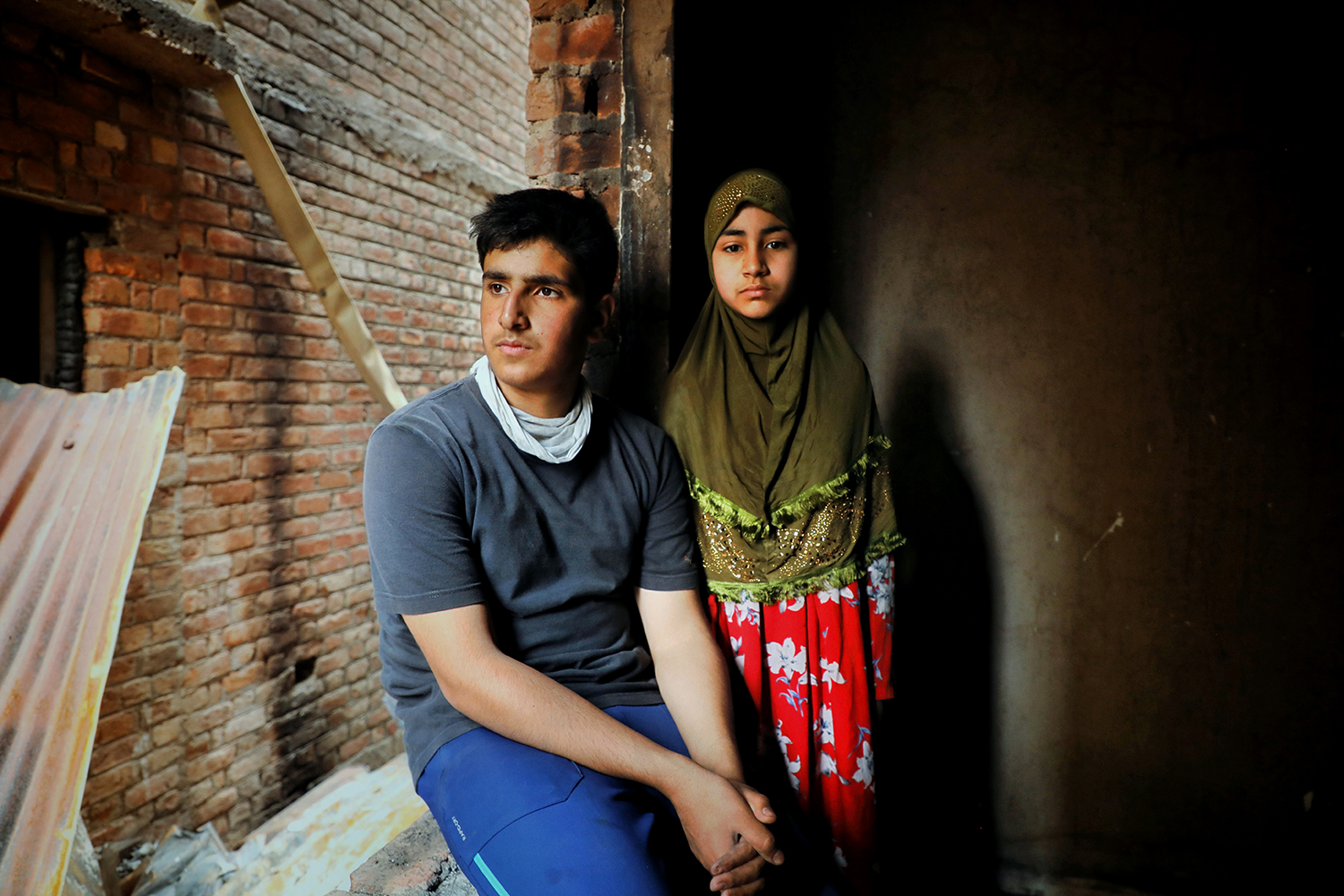 Salik Gandroo and his sister Safoora take a break while sanitizing the remains of their home in Srinagar on May 29.Sharafat Ali for Foreign Policy

Young people like Gandroo face particular challenges. Youth unemployment in Jammu and Kashmir is 70 percent, and the constant fighting inflicts a steep mental health toll. According to Médecins Sans Frontières, about 1.8 million adults, or 45 percent of the population, have experienced mental distress, and 70 percent have witnessed a violent death. With few opportunities, militancy can be an attractive option for some young adults.

Violence like what happened in May leaves Kashmir’s youth in an even more precarious position. Auto mechanic Adil Bashir, 22, saw his life savings destroyed that day. “It was hard to believe a place where I have spent 22 years of my life was no longer there. Everything was burned. I had cash saving of 130,000 rupees to [fix the roof]. Now there is no money left and no home to live in,” he said. 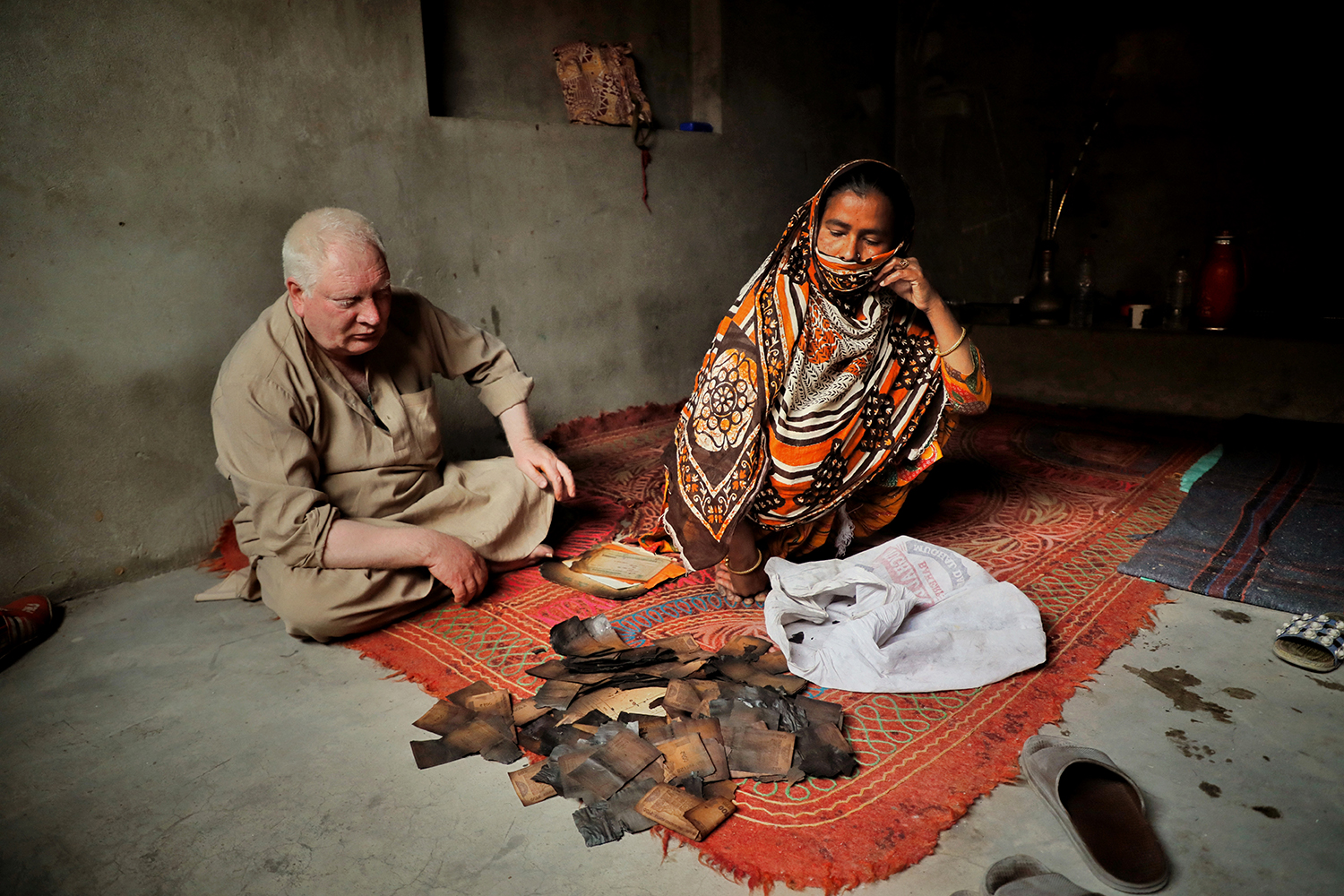 Bashir Ahmed and his wife, Baabi Ahmed, survey burned currency they had saved to try to fix the roof of their home in Srinagar on May 29.Sharafat Ali for Foreign Policy 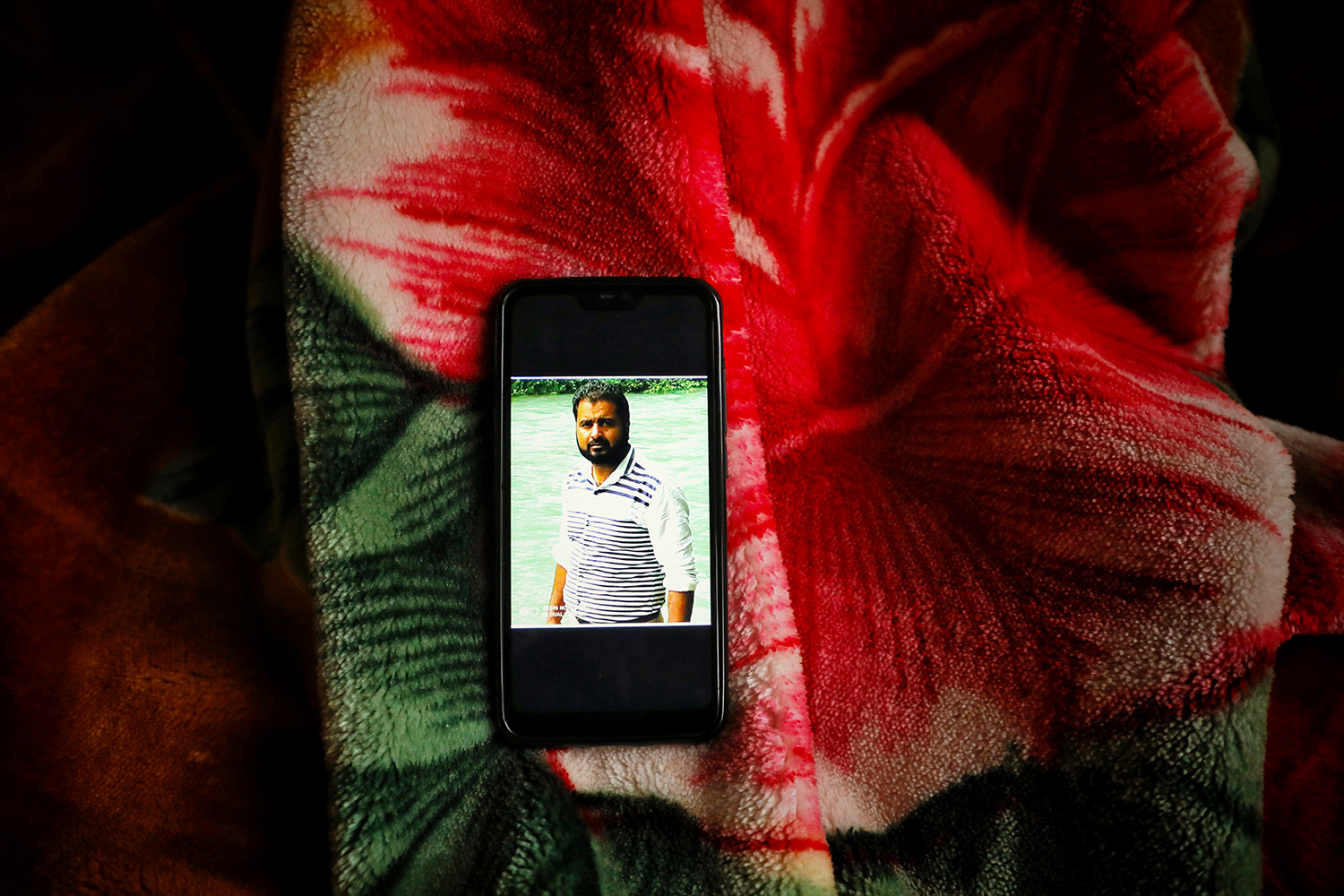 A photo of Fayaz Ahmad, who died from injuries received in the aftermath explosion in Nawakadal, leaving behind a family of five.Sharafat Ali for Foreign Policy

Bashir’s nephew, 12th grader Mohammad Ibrahim, was beaten by Indian forces before they searched his home, which was later destroyed by the fire. “Only the clothes which I am wearing and these shoes are what is left now,” Ibrahim said.May 19 marked the biggest clash of the past year, but it is unlikely to be the last large-scale battle. While New Delhi remains committed to wiping out the militants, its actions are driving more young people to pick up arms and join their ranks. Numerous political leaders and civilians—more than 400 in total—remain in prison or under house arrest despite never having stood trial. New laws enacted by New Delhi allowing outsiders to hold properties and jobs, with 25,000 domicile certificates already granted, suggest a concerted effort to change the demographics of India’s only Muslim-majority state. The media has been steeply curtailed, with journalists routinely harassed and intimidated by government forces. For the moment, New Delhi has contained dissent through its heavy-handed tactics, but in doing so, it has only alienated and angered Kashmiris more than ever. 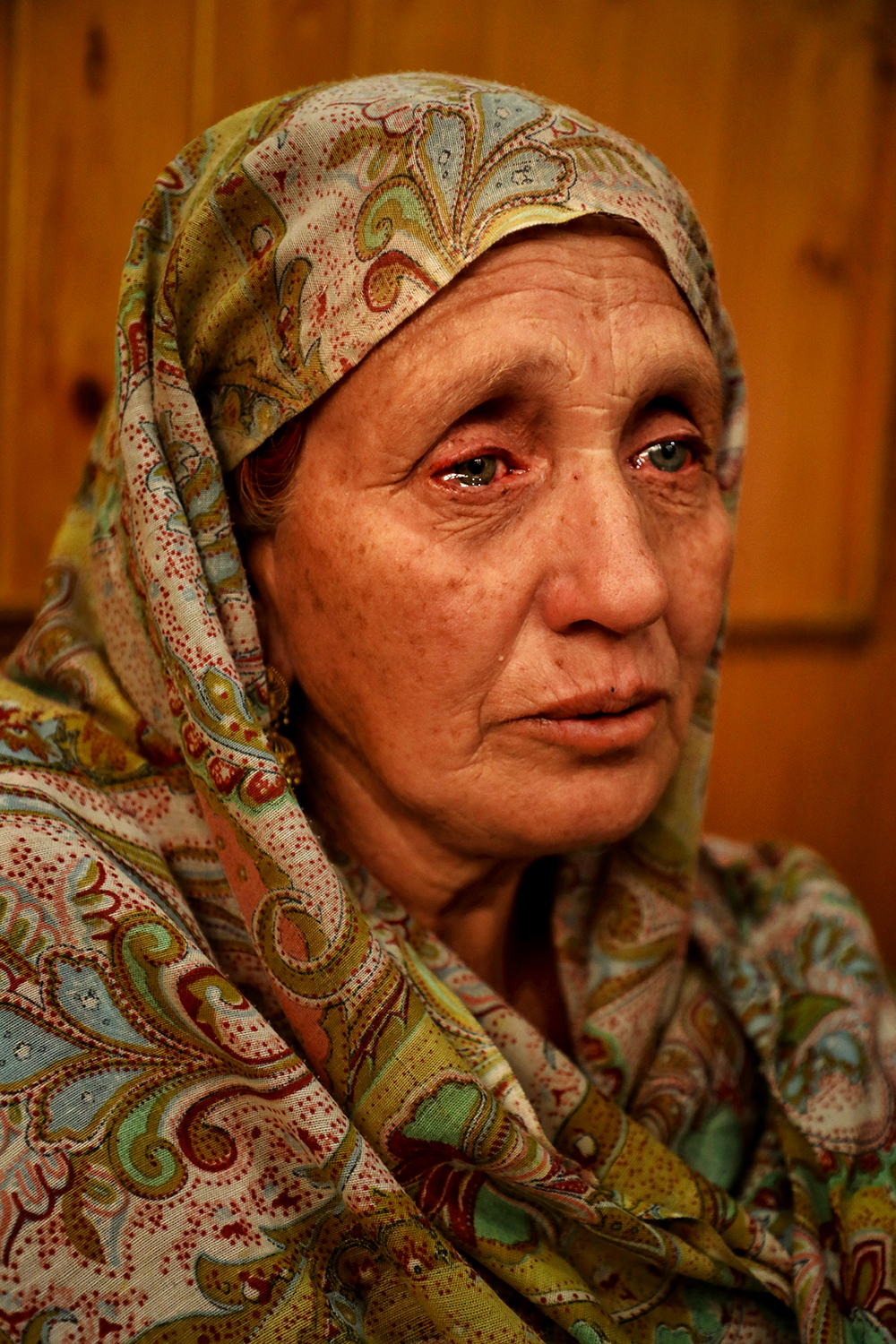 Javaida Ahmad mourns her husband in Nawakadal on May 31. Manzoor Ahmad died in the explosion in Srinagar, leaving his wife to care for her mother and six daughters. Her husband was the only male member of his family.Sharafat Ali for Foreign Policy

Adil Amin Akhoon is a journalist and the managing editor of Mountain Ink magazine based in Kashmir. Twitter: @AdilAkhoon3

Sharafat Ali is an award-winning photographer based in Kashmir. Twitter: @alisharafat10