Criminal bands and fighters are capitalizing on fear to expand their control in vulnerable communities.

As the coronavirus pandemic crept up in villages across Colombia in March and the country locked down, illegal armed groups began informing communities that they would take the law into their own hands. On March 28, the National Liberation Army (ELN)—a rebel group with a long history of abusing rights to impose its rules—announced a one-month nationwide cease-fire as a “humanitarian gesture to the Colombian people.” At the same time, ELN fighters in Bolívar, northern Colombia, released a pamphlet saying they felt “forced to kill people in order to preserve lives.”

Rights groups warn that armed groups including the ELN are using the pandemic to expand their control, threatening those who break the curfew with punishments and even death. In June, an urban criminal group that dubbed itself the Organization of Mexico released a flyer in Quibdó, Chocó department, offering to work with the local government to implement the curfew. The action was rejected by local authorities, but the group offered to contribute a fleet of 24 motorcycles to patrol the city to enforce the lockdown. “We won’t respect their lives, as they don’t respect those of our fellow countrymen with their actions,” the flyer said, suggesting those who violated the curfew would be killed.

Rather than granting a pause in Colombia’s protracted conflict, the pandemic has caused further unrest and anguish among residents across the country. The government’s historic absence in the remote territories where illegal trades such as drug trafficking and illegal mining thrive has long put communities in the crossfire. The coronavirus pandemic lockdown has left them further detached from basic health services and food supplies. Armed groups are now capitalizing on the fear caused by the pandemic to expand control over these vulnerable communities, as Human Rights Watch reported earlier this year. 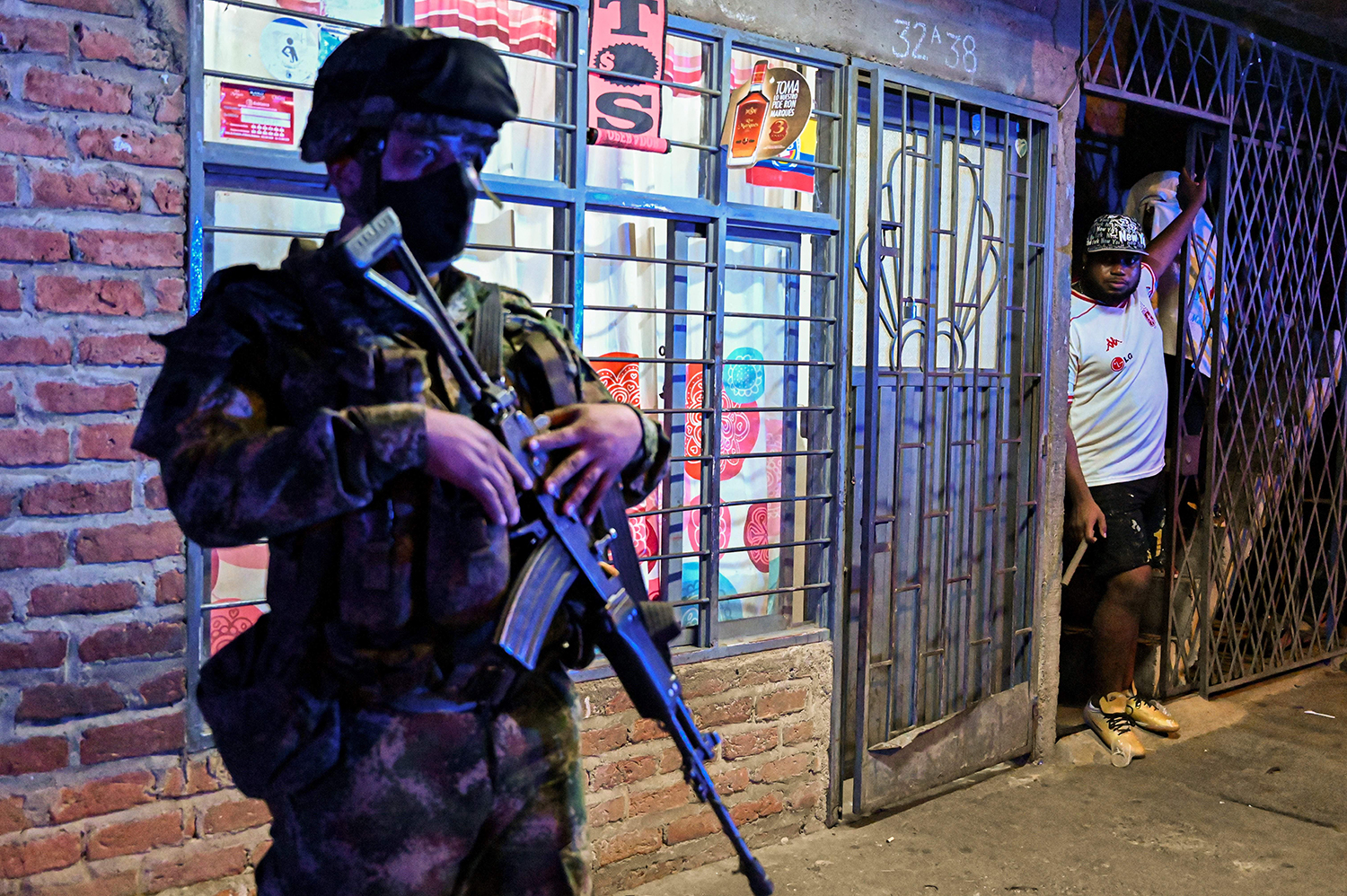 A Colombian soldier stands guard during a curfew imposed due to high numbers of coronavirus cases in Cali on July 17. In some of the country’s rural areas, illegal armed groups have taken the law into their own hands, implementing the curfews by force and threatening residents of harsh punishments if they fail to obey the lockdown rules. LUIS ROBAYO/AFP via Getty Images

According to official estimates, there have been at least 5,390 homicides across Colombia so far this year, and more than 60,000 people have been displaced or confined to their villages because of clashes between the armed groups that fight for control over criminal activities formerly carried out by the Revolutionary Armed Forces of Colombia (FARC-EP), which demobilized as result of the 2016 peace deal.

For more than five decades, the Colombian government has attempted—unsuccessfully—to achieve peace through negotiations with the various illegal armed groups plaguing its territories. While the ELN remains the main active leftist group, in recent decades, the conflict has mutated from one driven by guerrilla and self-defense groups with clear ideologies to a fight over lucrative illegal business.

In the last two decades, the Colombian government has reached peace deals with two major illegal armed groups: the right-wing United Self-Defense Forces of Colombia (AUC) in 2006, and the Marxist FARC-EP in 2016. By 2017, at least 7,000 fighters had disarmed from the FARC-EP, but the hype around the disarmament of Colombia’s largest guerrilla group was short-lived. The government couldn’t effectively occupy the territories where former fighters operated, providing combatants with another opportunity to join dissident groups or create new groups with the aim of taking over illegal trades. Likewise, groups such as the Gaitanist Self-Defense Forces of Colombia and the Organization of Mexico are examples of offspring groups from the 2006 peace process with the AUC. 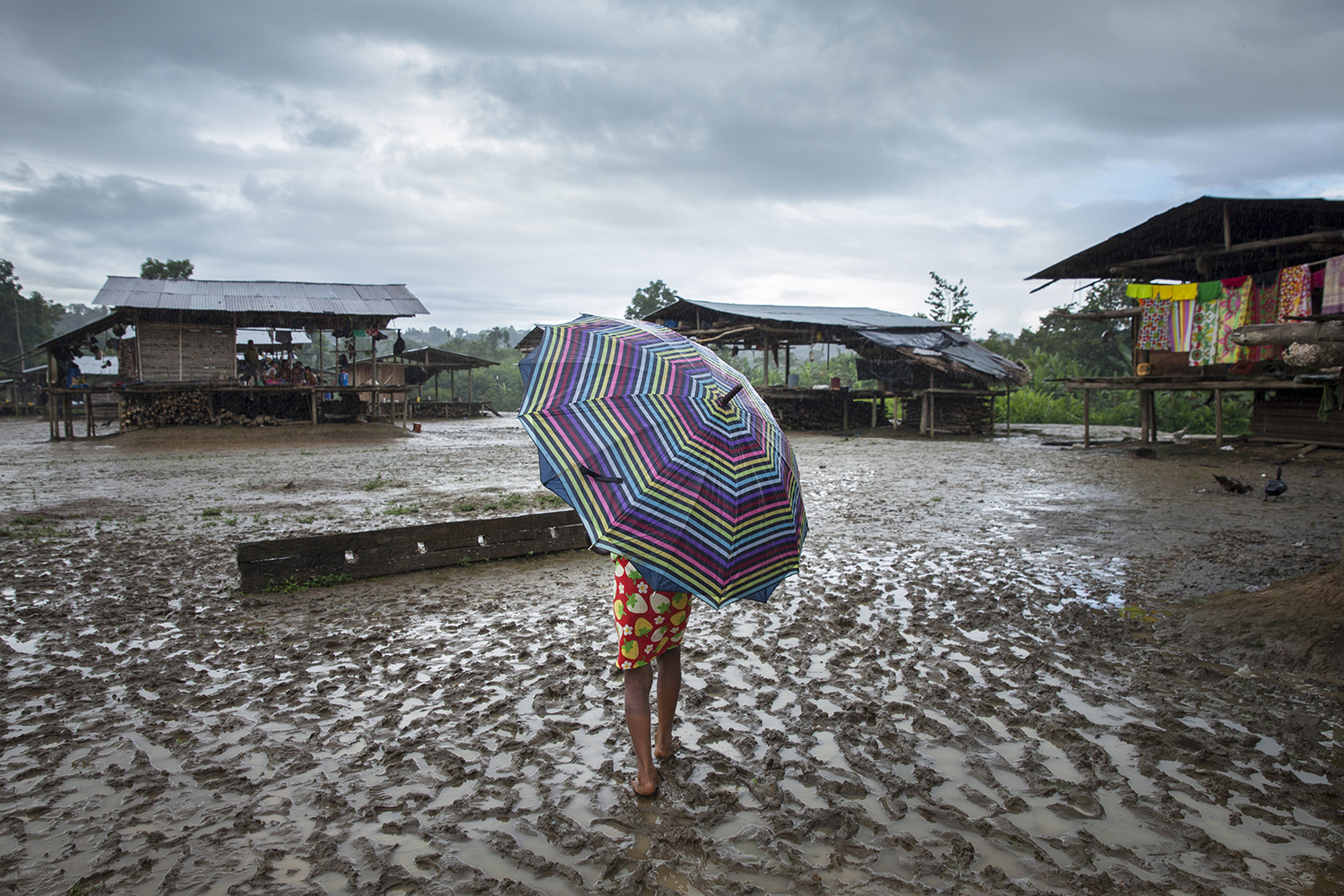 A girl walks through an Embera Indigenous community on the riverbank of the Baudó River on June 11, 2017. Recent clashes amid the pandemic killed a 9-year-old girl from an Embera community, which had been displaced earlier this year by conflict in the region. Erika Piñeros for Foreign Policy

For many communities across Colombia, isolation is not a choice. The coronavirus has infected more than 300,000 Colombians and claimed more than 11,000 lives, leading the government to extend its national lockdown until Aug. 1. But villagers in rural areas are often confined to their homes by the violence in their communities. Despite various attempts to find a political solution to Colombia’s decades-long conflict, it has claimed more than 9 million victims—a number that continues to rise.

Residents of the western department of Chocó are particularly vulnerable to displacement by armed groups. Deserted jungles and a network of rivers running to the Pacific Ocean make it a profitable region for illegal trades such as mining and drug trafficking, and a hotbed of conflict between armed groups including the ELN and the Gaitanista Self-Defence Forces of Colombia.

Darwin Lozano, a community leader in Quibdó, has documented violence in the city for the past four years. Between January and mid-July, violence by criminal bands caused 88 deaths in Quibdó, according to Lozano. People have normalized the violence by saying that “if you get plomo [lead bullets], it is because you deserve it,” he said. But many victims are simply caught in the middle of the conflict. In June, videos posted to social media attributed to the Organization of Mexico showed gang members beating residents with whips and sticks in Quibdó for breaking the curfew.

The statements by armed groups apparently siding with the government and threatening to enforce the curfew not only intimidate residents, but also compromise the credibility of the authorities. “They are trying to supplant the authorities,” said Col. Henry Galán of the Chocó police department. The police have asked for the cooperation of the community in informing the local authorities of the incidents, but residents fear reprisal, according to Lozano. “There is no confidence in the police,” he said.

In Colombia, the pandemic and the subsequent lockdown has affected children in particular. With schools across the country shut down, students returned to their families in rural areas—where the lack of military presence makes them an easy target. According to experts, some parents report that fighters have warned them that their children would be taken to support their cause, while others say that children have been lured with gifts and money.

During Colombia’s civil war, nearly 17,000 minors were forcibly recruited by illegal armed groups as of 2017. According to the Coalition Against the Involvement of Children and Youth in the Colombian Armed Conflict, a local monitoring group, at least 190 children were enlisted by various armed groups in the first six months of the year—as many as were recruited during all of 2019. 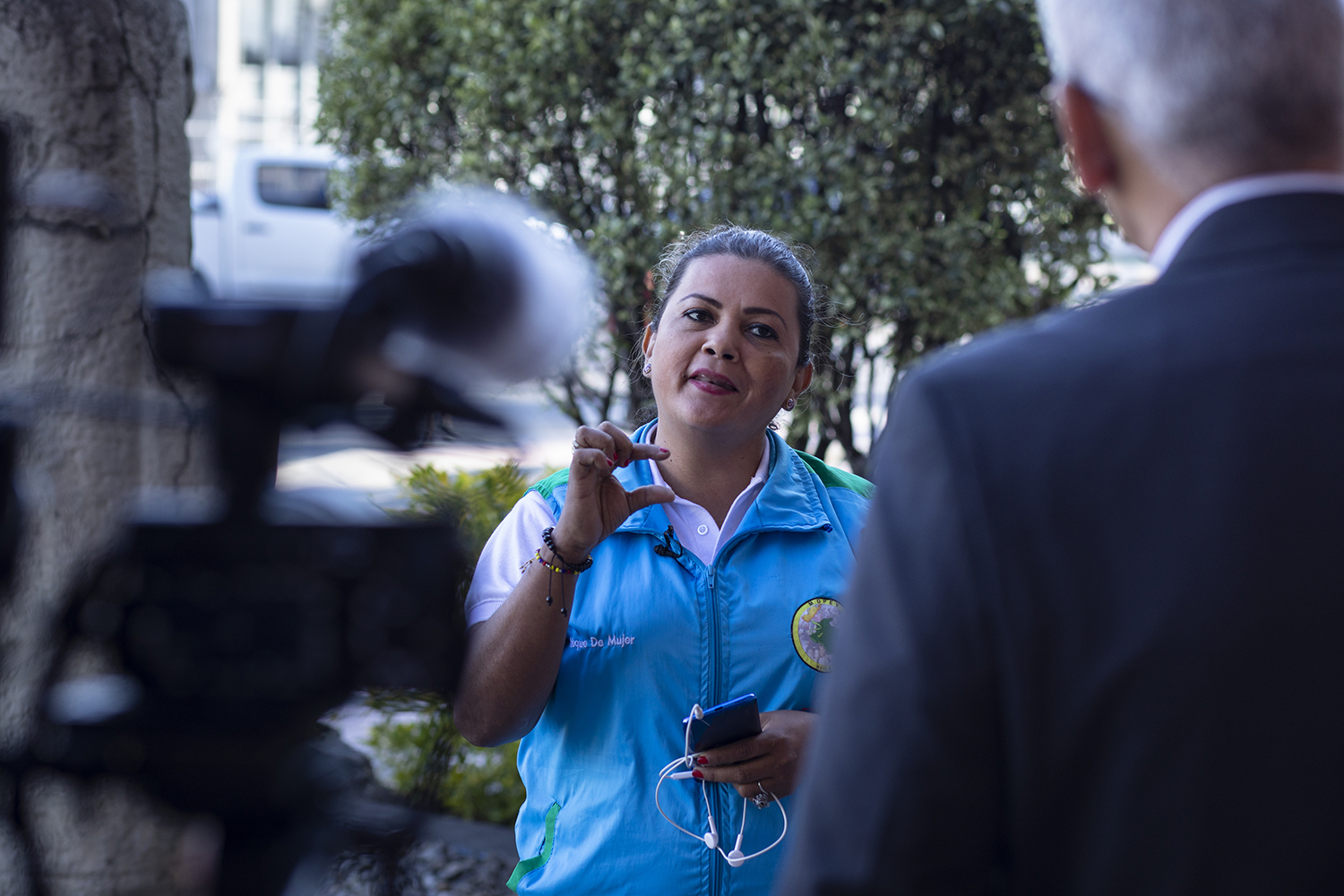 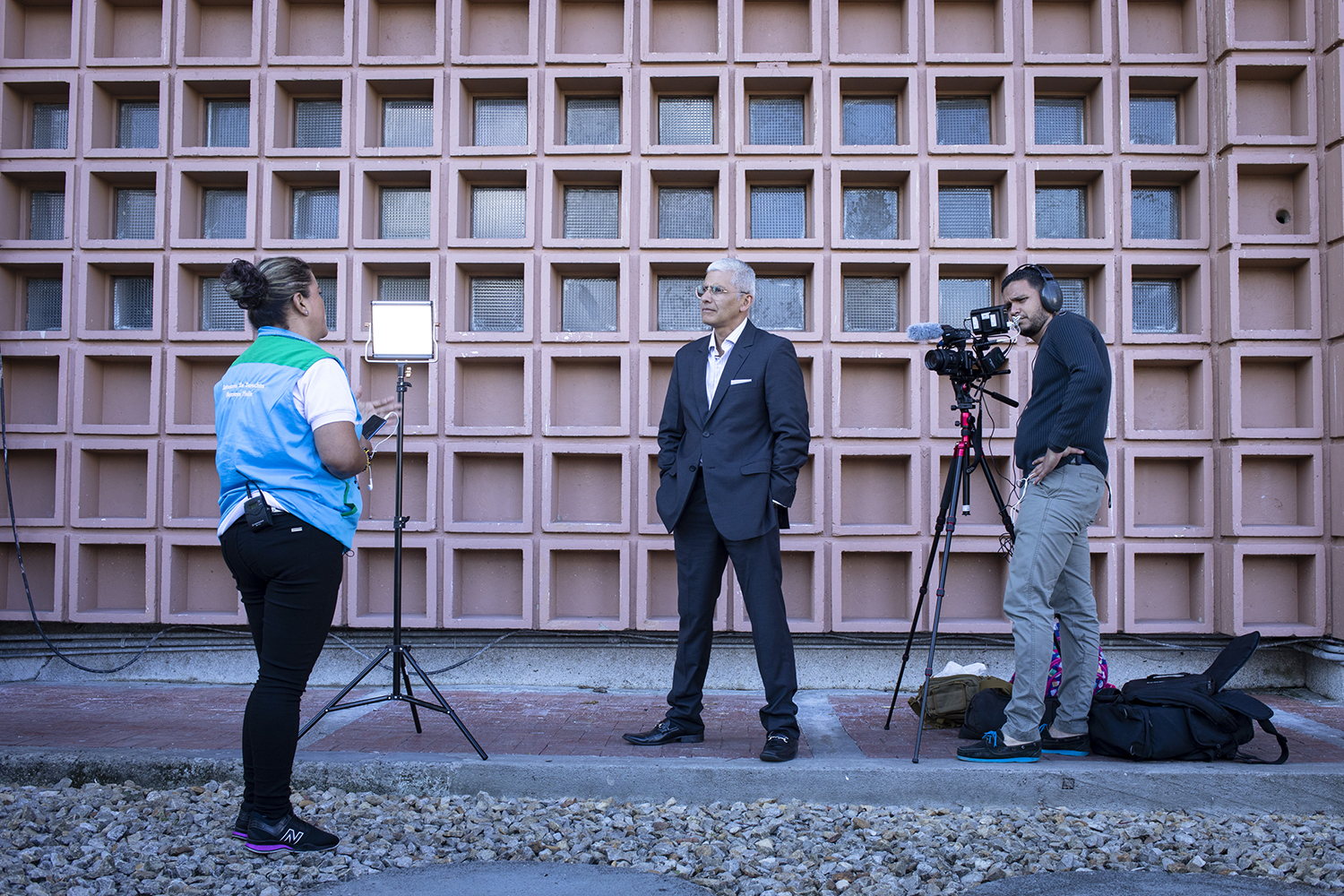 Derly Pastrana, a social leader and human rights defender in Huila, is interviewed about the rights of victims of the conflict in Bogotá on Feb. 10. Erika Piñeros for Foreign Policy

Derly Pastrana, a human rights activist in Huila department in southern Colombia—an area hit hard by the conflict for decades—said that the families of at least 70 children, including some as young as 10 years old, have been warned by FARC-EP dissidents of imminent recruitment. In June, Pastrana led a mission to relocate a woman and her two children, aged 9 and 10, in response to such threats. There isn’t enough support from the government to protect those at risk, said Pastrana. “We have to do everything ourselves,” she said.

Few cases get reported because victims fear retaliation, making it hard to keep an accurate toll of the number of recruited children. “It’s hard for people to come forward, because they’re scared,” said Angie Zapata, a human rights activist in Cauca department, in the country’s southwest. The issue has become particularly challenging during the pandemic, as Indigenous and government authorities, who usually mediate directly with the groups to negotiate releases, are unable to visit because of the lockdown. 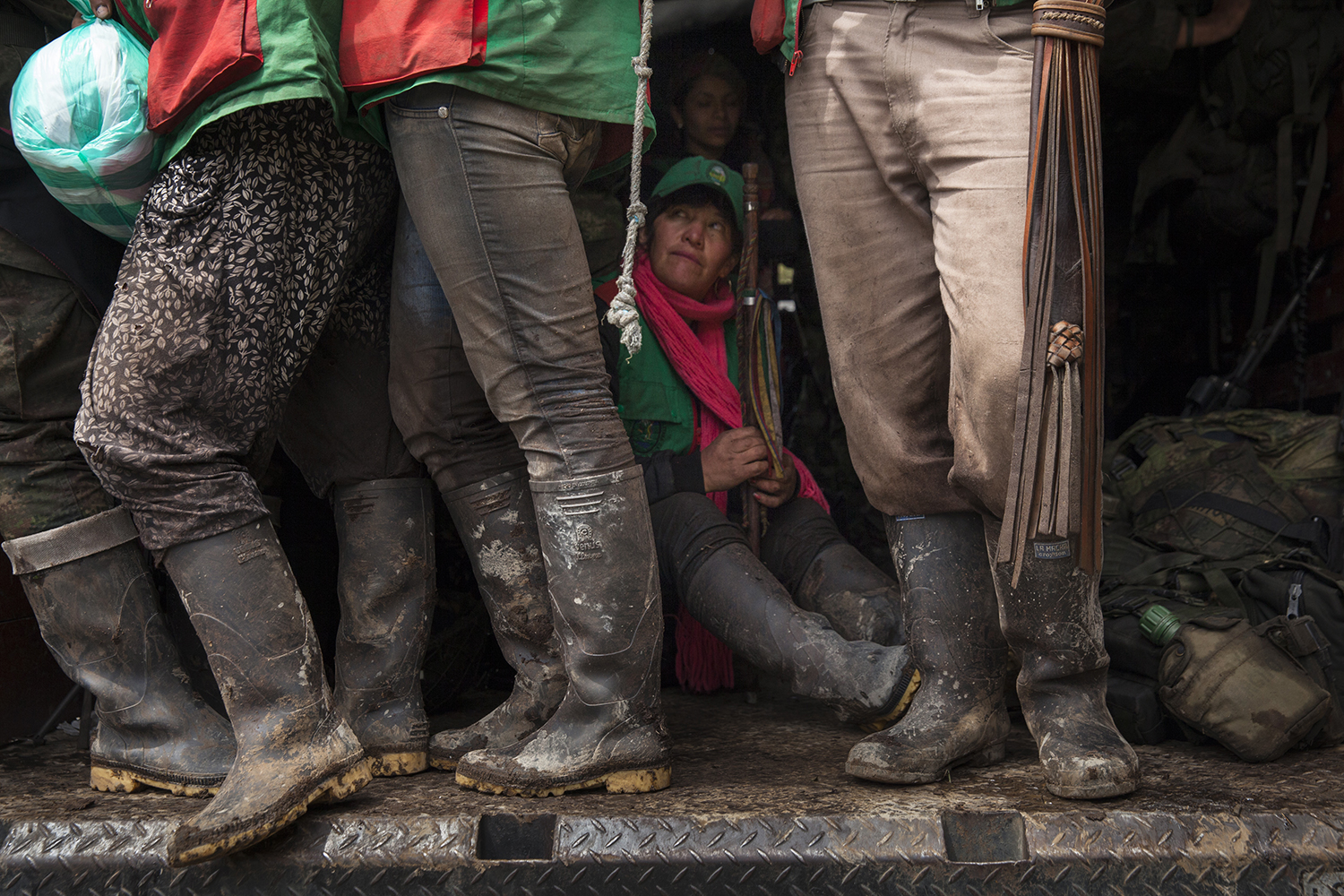 Members of an Indigenous guard in Cauca rest in the back of a truck after days of searching for a woman who was kidnapped by men wearing ELN-identifying armbands on Nov. 18, 2016. In Cauca, Indigenous and ethnic communities have a long history of organizing themselves, even acting as unarmed guardians of their own territories. Erika Piñeros for Foreign Policy

Cauca is a remote and mountainous region on Colombia’s Pacific coast with limited state presence, where ethnic Indigenous communities have a long history of organizing themselves. “Everyone knows that if that disease reaches us, there is no possibility of survival because there is no medical infrastructure,” said Lisifrey Ararat, a leader from the town of Suárez.

For Ararat and other leaders, the lack of hospitals, telecommunications, roads, and infrastructure in their region puts their communities at higher risk—forcing them to make difficult decisions such as placing biosecurity checkpoints and sealing off outsiders. Such measures have increased tensions with armed groups which fight to control the region, and further isolated the communities from basic health services and food supplies. 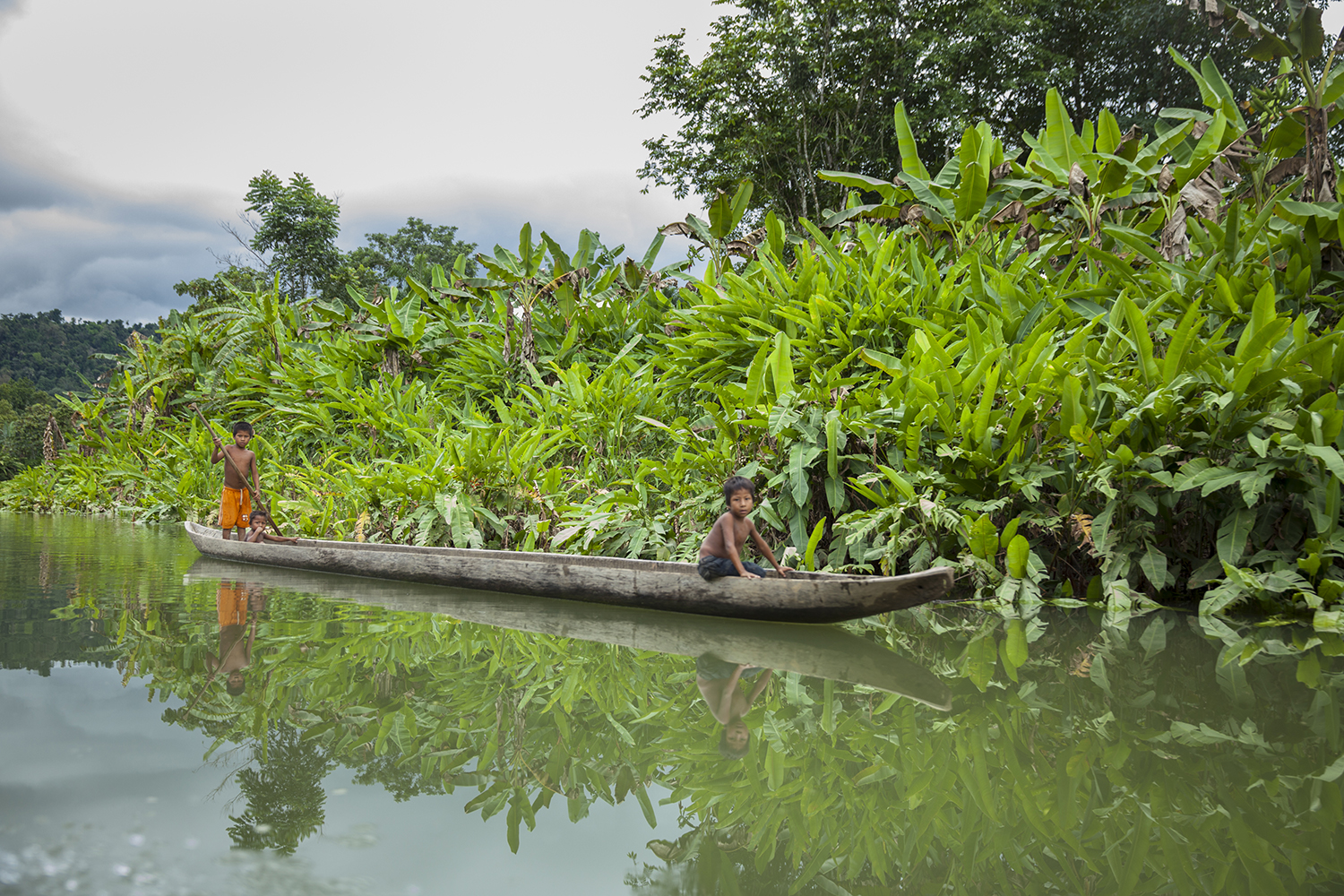 Embera boys navigate a branch of the Baudó River in Chocó on June 11, 2017. Erika Piñeros for Foreign Policy

Because of their remote location, the communities are ultimately at the mercy of the armed groups. “They are the law here,” Ararat said. Armed groups have imposed curfews and informed the communities the new rules and penalties for those who don’t obey, through flyers left at their homes or sent via WhatsApp. The lockdown measures have made it harder for community leaders to meet and maintain communication, Ararat said, resulting in a vacuum of power that grants an opportunity to those threatening their communities.

Social leaders and observers monitoring communities in both Chocó and Cauca agree that the lockdown has created a suitable ground for illegal armed groups to strengthen and expand control by joining forces with other groups. “We have noticed a change in how the groups present themselves,” Zapata said. Prior to the pandemic, announcements suggested the presence of as many as ten groups, according to Zapata. Now the groups appear to have centralized their branding under FARC-EP.

Still, Eriberto Andrades, the ombudsman for Alto Baudó, said that containing the coronavirus remains a major challenge for the region—in part because of the ongoing violence. “People don’t want to obey the state,” he said, adding that in Quibdó, people repeatedly broke the lockdown despite efforts by the authorities. “Now they see the pamphlets and everyone behaves,” he said. “They respect that law because they know that those people don’t respect [anyone’s] life.”

Carolina Loza León is a journalist based between Ecuador and southwest Colombia covering foreign policy and human rights. Twitter: @CLozaLeon