As the death toll in Beirut continues to rise, the Lebanese government’s role in the accident is inflaming public anger.

Here is today’s Foreign Policy brief: Lebanese citizens seek answers and accountability in the aftermath of deadly explosions in Beirut, FP Analytics publishes a new report tracking different countries' responses to the COVID-19 pandemic, and the United States announces its highest-level meeting with Taiwan in decades.

Correction: Yesterday's newsletter misstated the number of deaths caused by the Aug. 4 Beirut explosions. At least 137 people were killed by the blasts, according to the latest figures.

Here is today’s Foreign Policy brief: Lebanese citizens seek answers and accountability in the aftermath of deadly explosions in Beirut, FP Analytics publishes a new report tracking different countries’ responses to the COVID-19 pandemic, and the United States announces its highest-level meeting with Taiwan in decades.

Correction: Yesterday’s newsletter misstated the number of deaths caused by the Aug. 4 Beirut explosions. At least 137 people were killed by the blasts, according to the latest figures.

Rescue efforts continued on Wednesday as Lebanon struggles to come to terms with a deadly pair of explosions that ripped apart the capital city of Beirut on Tuesday. Casualty figures continue to climb. The death toll now sits at 137, along with more than 5,000 injured. These figures are expected to rise.

The damage to infrastructure was severe, and Health Minister Hamad Hassan reported that up to 250,000 people were left homeless. Writing in Foreign Policy, Anchal Vohra described the experience from her home in Beirut. “Terrified and shocked, we wondered if Lebanon was at war,” she wrote.

The cause of the explosion is still unknown, but its ferocity was due largely to the presence of 2,750 tons of ammonium nitrate stored nearby. Ammonium nitrate is a highly explosive material that is often used in bomb-making. President Michel Aoun echoed the public feelings of hurt and anger, saying in an address that “no words can describe the horror that has hit Beirut last night, turning it into a disaster-stricken city.”

Where did the explosives come from? In his address, Aoun confirmed that the ammonium nitrate had been stored in Beirut since 2014 after Lebanese officials seized a large shipment from a vessel trying to gain entry into the city’s port. Described as a “floating bomb,” contemporary media reports suggested that the ship was a Russian vessel with a Ukrainian crew, though the shipment’s final destination was unclear.

The cargo was never moved after its seizure, despite concerns raised by some officials. According to a report from the Guardian, inspectors warned that if it was not adequately dealt with, it could “blow up all of Beirut.” Those warnings went unheeded.

Looking for culprits. For the public, the government’s apparent negligence is the latest sign that endemic corruption renders it unresponsive to the needs of the public. As public criticism mounts, the government has moved quickly to place port officials tasked with storing and guarding the material since 2014 under house arrest, and an investigation is now underway. Writing in Foreign Policy about the negligence and corruption that led to the explosion, Oz Katerji compares the incident to the Chernobyl disaster.

Too little, too late. But the government’s punishment of port officials may not be enough to quell public anger. It has come under immense pressure since October after protesters took to the streets demanding an end to sectarian politics and corruption. The outbreak of the pandemic coupled with the collapse of the economy in recent weeks have further inflamed those feelings of discontent, and Tuesday’s accident could prove to be the tipping point, regardless of the government’s efforts. 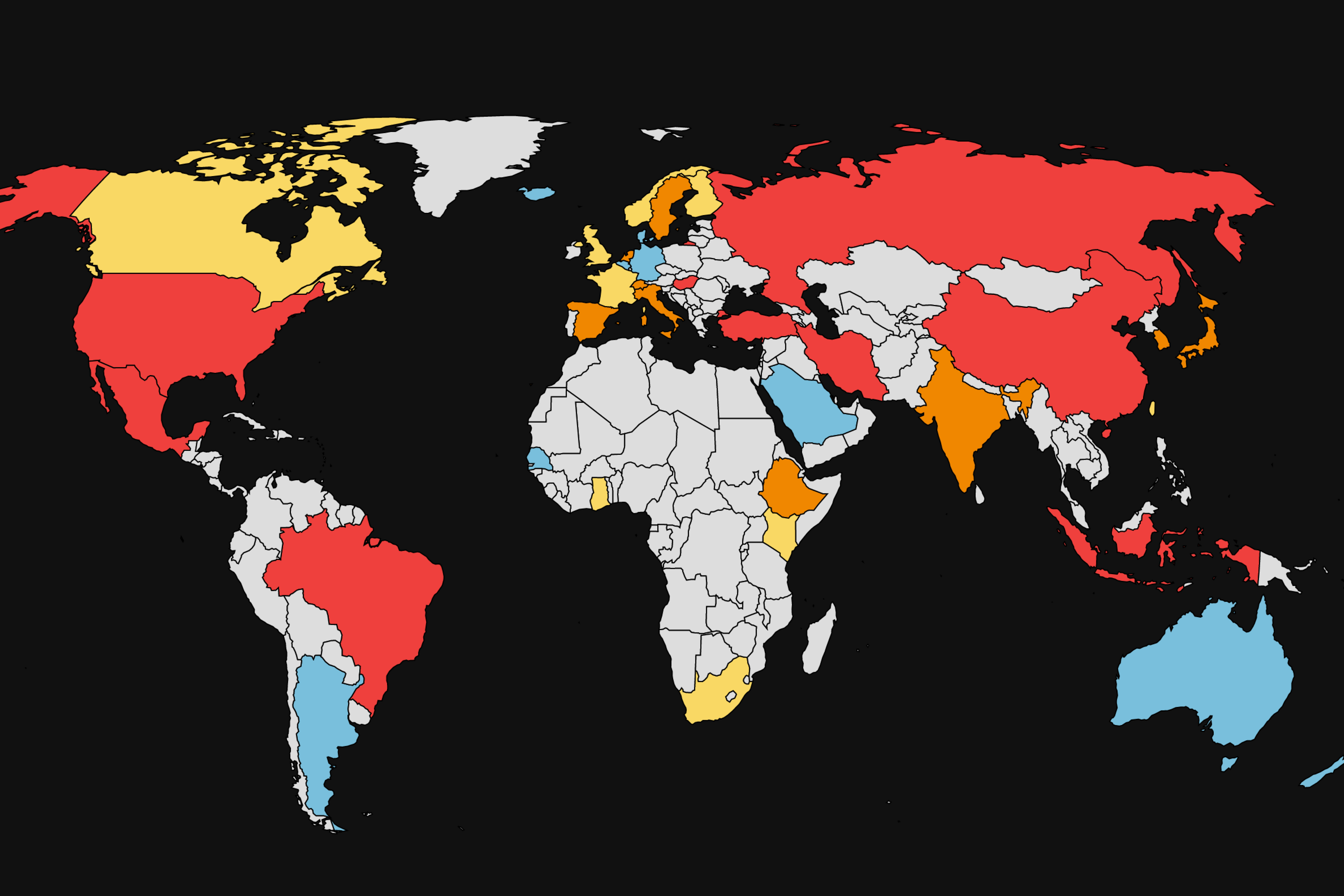 FP Analytics, the independent research division of Foreign Policy, published its COVID-19 Global Response Index today, a first-of-its-kind report assessing several governments’ responses to the pandemic across key policy areas. The index includes 36 countries, including all of the G-20 members along with several developing and middle-income countries. It includes policy choices and actions across three categories and produces a composite score for each country.

The index was developed using insights from experts at the forefront of fighting, studying, and understanding the virus—including those from the U.S. Centers for Disease Control and Prevention, USAID’s Emerging Pandemic Threats project, and several leading universities.

Key takeaways. Governments that acted quickly, were adequately prepared, and implemented targeted responses scored highest. These indicators were considered more important than a country’s socioeconomic and health security, which did boost responses but were not enough to manage the crisis on their own. In some countries, past experiences with deadly epidemics meant the infrastructure was already in place to combat the virus, leading to better results. The index also found that among the top 10 highest-performing countries, women led the governments of half of them.

U.S. deficiencies. It is little surprise that the United States ranked with China, Iran, Mexico, Indonesia, and Turkey as one of the six worst-performing countries. The report noted that high levels of inequality, low numbers of hospital beds, and high debt levels all contributed to the conditions that helped the pandemic spread. High levels of misinformation also played their part.

Bottom of the barrel. China scored last in the index. The report notes that this was driven by its low investment in healthcare services, its minimal financial response, and the government’s effort to obscure and suppress information during the early stages of the outbreak. Although the report acknowledged that Beijing’s early response likely helped curb the rate of deaths and cases, figures supplied by the Chinese Communist Party are unreliable.

The full index is available to members of FP Insider. Click here to become a member and access this and other reports by the FP Analytics team, in addition to all of FP’s content and newsletters.

Saber-rattling over Taiwan. On Wednesday, the United States announced its highest-level meeting with Taiwan in decades, a move sure to provoke anger in Beijing as relations between the world’s two largest economies continue to worsen. Alex Azar, the U.S. secretary of health and human services, will lead a delegation to the island in the coming days, during which he will meet with Taiwanese President Tsai Ing-wen and other senior officials to discuss ongoing pandemic relief efforts. China urged Washington “not to send the wrong signals to Taiwanese secessionists.”

Emergency lockdown in Scotland. Scottish First Minister Nicola Sturgeon moved quickly to impose a partial lockdown in the city of Aberdeen on Wednesday, after 54 new cases of COVID-19 were reported. The outbreak was linked to a bar, leading Sturgeon to close all pubs in the city and impose a ban on all non-essential travel. Sturgeon told reporters that the lockdown was a necessary measure. “We need to take decisive action now in order to prevent a larger outbreak and further harm later on,” she said.

Bulgarian prime minister on the ropes. Protesters in Bulgaria are close to bringing the government down. After weeks of demonstrations, Bulgarian Prime Minister Boyko Borissov told party activists on Wednesday that he was prepared to resign, but stressed that he wanted the rest of the cabinet to stay in place to continue fighting the coronavirus and the economic problems caused by the pandemic. Critics of the government say Borissov’s resignation won’t be enough to end the demonstrations, meaning they are likely to continue into the foreseeable future.

Zimbabwe protests go global. International figures including U.S. celebrities Ice Cube, Lecrae, and Tinashe have joined the chorus of those denouncing Zimbabwean President Emmerson Mnangagwa and his poor human rights record in the country. Activists have been lobbying the U.S. government to speak out on the issue for years, but the situation reached a crisis point on Friday when security forces moved to crack down on activists planning anti-government demonstrations in the country’s capital, Harare. Their efforts have helped internationalize the #ZimbabweanLivesMatter campaign on social media, itself a response to the Black Lives Matter movement in the United States.

Explosion in North Korea. A deadly explosion rocked the North Korean town of Hyesan, in Yanggang Province. Video footage of the explosion, which was visible from across the border in China, emerged soon after the blast. According to Daily NK, a Seoul-based outlet that covers North Korea, nine people were killed and 30 were injured. A local source said that gasoline stored inside a house ignited, which caused a liquid petroleum gas cylinder to explode. Similar cylinders in nearby houses also exploded, causing a series of several blasts that destroyed much of the town. The owner of the home where the fire started has been arrested as part of an investigation, though details have yet to emerge.

Pakistan stands behind Kashmir. On the first anniversary of the Indian government’s decision to revoke Kashmir’s special autonomous status, Pakistani Prime Minister Imran Khan heaped criticism on his Indian counterpart, Narendra Modi, and reiterated his support for Kashmiri self-determination. In a statement, Khan called Indian activity in the region since the move a “crime against humanity,” and in a subsequent address to the legislative assembly, he said Modi has been “exposed in the world.” One year later, as FP’s Kathryn Salam writes, the region is still saturated with troops, communications are slow, and arrests are a routine part of daily life.

He-Who-Must-Not-Be-Named. Anti-government protests took place in Thailand earlier this week as demands for limits on the power of the monarchy grow. Due to strict laws forbidding criticism of royals, the demonstrations featured a happy twist. Many of the 200 activists showed up dressed as Harry Potter and other characters from the popular book and film series in an effort to draw parallels between their fight against the government and Harry Potter’s battle against the totalitarianism of Lord Voldemort.

NEW FOR SUBSCRIBERS: Want to read more on this topic or region? Click + to receive email alerts when new stories are published on United States, India, Middle East and North Africa