BEIRUT—The second, much bigger explosion came just after Khadije Hussain’s five children had run into the kitchen with their mother, ducking into a corner as the blast wave hit their bodies and smashed windows pierced their skin.

“I thought the war had returned,” said Hussain, 37. She survived the Aug. 4 double explosion in Beirut’s port with only minor injuries. Others weren’t so fortunate: The detonation of thousands of tons of ammonium nitrate killed at least 177 people and wounded over 6,000 more, causing an estimated $15 billion in damage to a place that was already broke and badly broken.

Ten days after the blasts, Hussain’s windows are still shattered: Her family couldn’t afford the repair, even if glass and glaziers were to be had. “Windows are hard to come by these days anyway. The demand is too high,” she said. 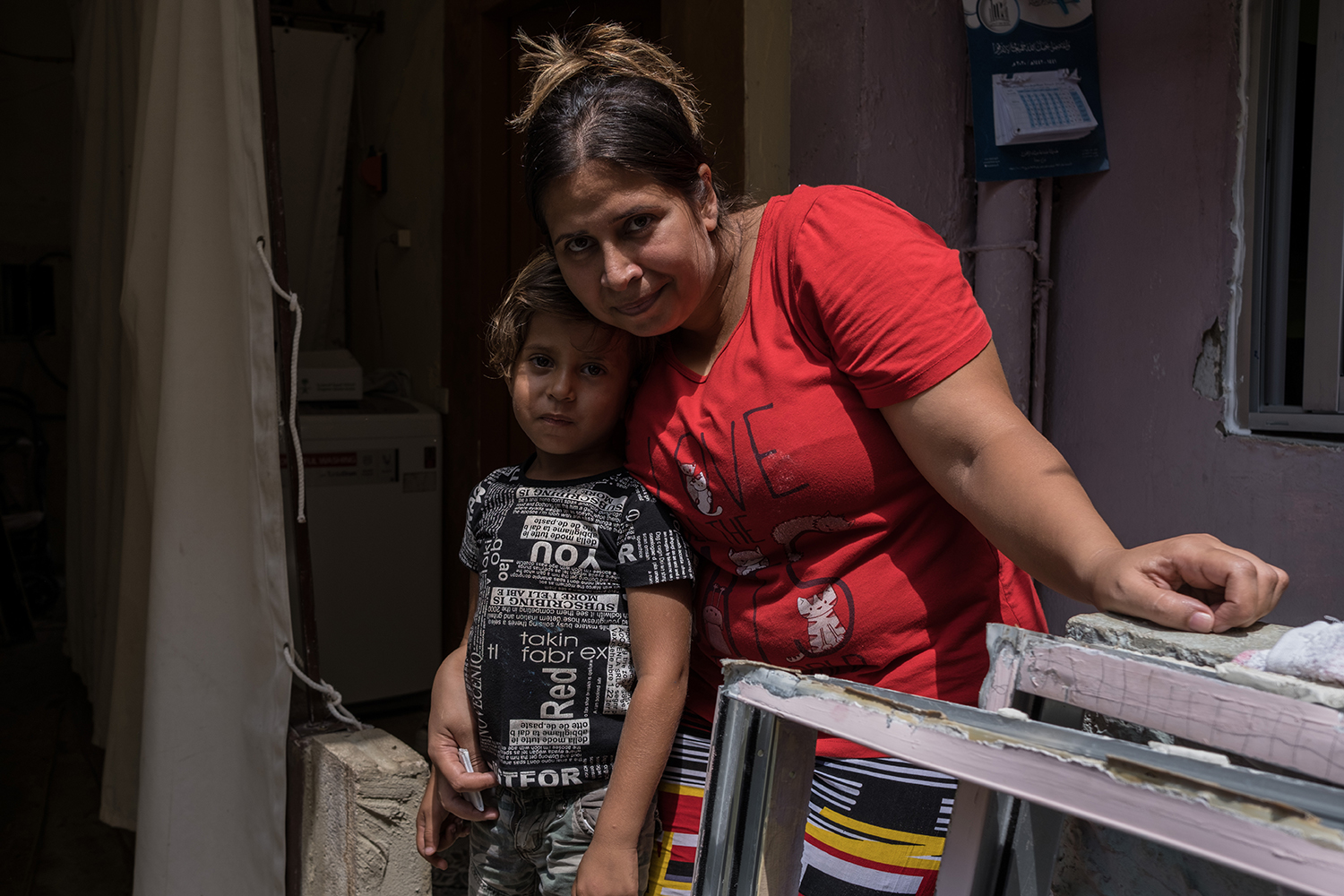 Khadije Hussain stands with her son Ali in front of her house in Beirut on Aug. 10, her hand resting on window frames that were blown out during the port explosion. Stefanie Glinski for Foreign Policy

There won’t be any quick or cheap fixes for what ails Lebanon, either. While the entire government cabinet resigned en masse just days after the blast, many people here fear more of the same, even as they acknowledge that simply reshuffling the same political elite that has run the country since the end of the civil war in 1990 will lead to no lasting change.

“We want to get rid of the ruling class—not just the politicians but also the contractors, the banks, and those protected by the state who are responsible for the economic crisis and the blast,” said Fouad Debs, a lawyer by day and a protester by night.

Reeling from the aftermath of a chemical explosion in the city’s port, Lebanon’s most vulnerable are bracing for even more anguish.

Since the double explosion 10 days ago, thousands of people have taken to Beirut’s streets, many hurling rocks at blocked-off government buildings or setting fire to puppets masked as Lebanese politicians hanging from gallows. Demonstrations already began last October after the government announced that it would tax WhatsApp, the popular communications app; it was the last straw in a chain of events that had led to an economic crisis. Protests had already gotten out of hand and resulted in then-Prime Minister Saad Hariri’s resignation.

These days, riot police fired tear gas to disperse the crowds, and the Lebanese parliament on Thursday approved a state of emergency in the city, which will give extraordinary power to the military to suppress protests. A flood of armed soldiers in the streets in recent days—as well as people working to clear up the city—has largely quelled the protests but not the people’s raw anger.

With hundreds of thousands of people suddenly homeless, countless volunteers armed with helmets, gloves, and shovels have taken it upon themselves to clean the piles of rubble that still fill the city’s streets. It’s a job, they say, the government won’t be doing. 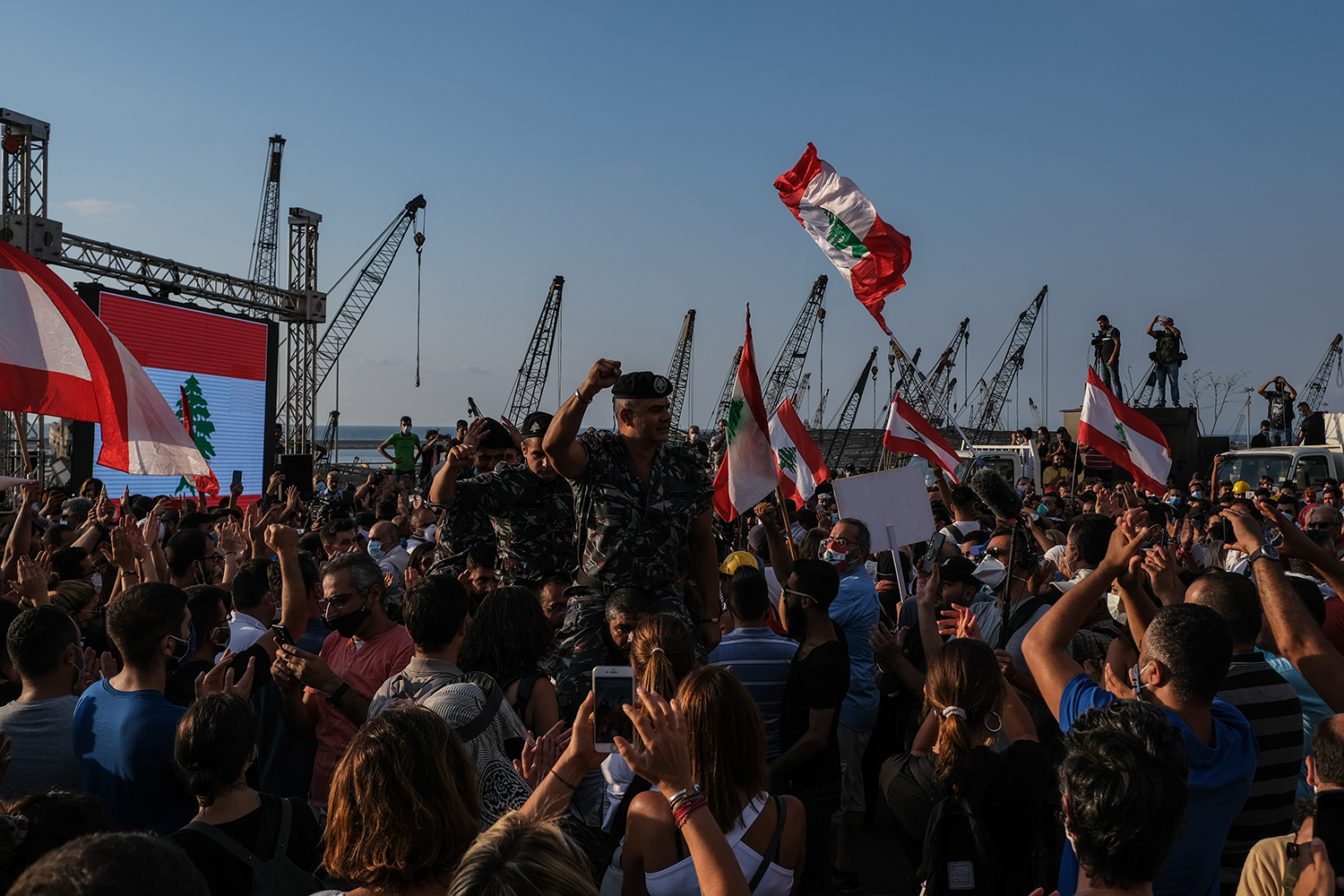 “The explosion has demonstrated a complete disregard by the political elite, an ultimate failure of a corrupt system,” Debs said. Beirut’s citizens, already struggling with an economic collapse, a currency crisis, and skyrocketing food prices, will now have to rebuild their own city, with their own resources.

For decades, Lebanon’s multiconfessional parliament has been divided along geographical and sectarian lines. Thirty years after the end of the civil war, Lebanese political life remains dominated by the former Shiite, Sunni, and Christian warlords from that era. Iran exercises outsized influence through its support of the militant Shiite Hezbollah, a militia and political party that has the upper hand in governing Lebanon; keeps a close alliance with the country’s Christian president, Michel Aoun; and also controlled large parts of the port, driving many Lebanese to speculate that the group was storing weapons there.

Political reform, long sought but seldom seen, is key not just to finding accountability for the recent explosions. Serious reform is also a precondition for exactly the kind of international aid that Lebanon needs to restore its disastrous economic situation. The International Monetary Fund (IMF) has offered to bail out the country, which is saddled with about $90 billion in debt, under one condition: The government must make specific reforms to restore the financial system, avoid capital outflows, and help the most vulnerable. 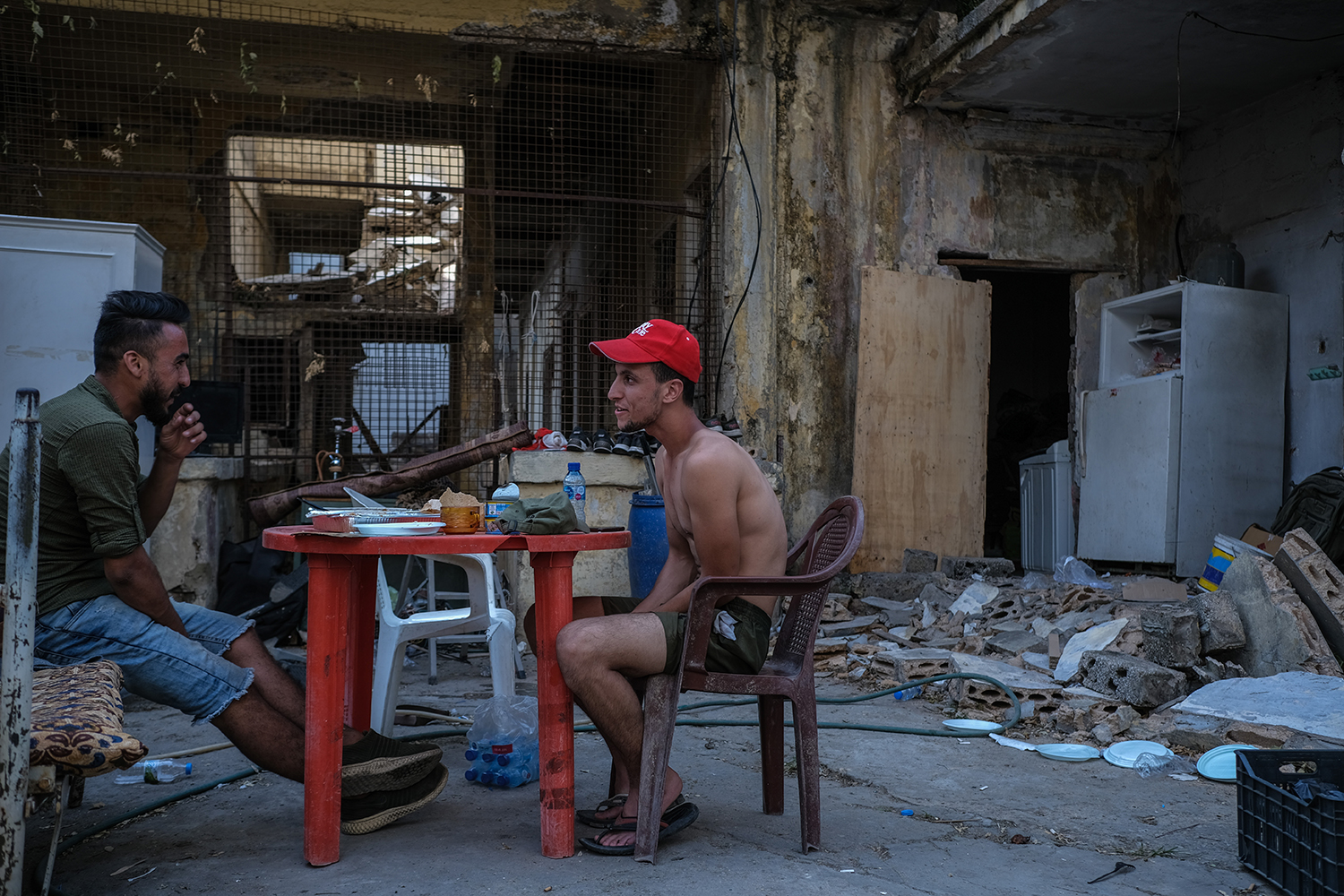 Syrian refugees sit in what is left of their houses after the explosion about a mile from Beirut’s port on Aug. 11. Stefanie Glinski for Foreign Policy

“We stand ready to help,” IMF Managing Director Kristalina Georgieva said last week at a French-organized donor conference aimed at raising money to help Beirut. “Commitment to these reforms will unlock billions of dollars for the benefit of the Lebanese people. This is the moment for the country’s policymakers to act decisively.” A top U.S. official, David Hale, the undersecretary of state for political affairs, on a visit to Beirut echoed the IMF’s request by stressing the need for economic reform in the country.

Two scenarios seem to be on the table for now, said Nadim Houry, the executive director of the Arab Reform Initiative, a think tank. The first would be a national unity government, which would include all current political parties and would essentially be nothing more than a continuation of the same faction-riven, elite-driven politics that have bedeviled the country for years. Lebanese who’ve spent much of the past year—and especially the past week—in the streets would find that unacceptable.

The other option, though a lot less likely, would be some sort of interim “national salvation government,” which would bypass the current political elite, lay the groundwork for fresh future elections, and earn the trust of the international community, including the IMF.

For Lebanese, the shape of the next government is hardly an academic exercise. Protests have in the past year brought down two governments already. State of emergency or not, many Lebanese have vowed to stay in the streets until real change is on the horizon.

“Lebanon could be at a tipping point,” Houry told Foreign Policy. “If we miss this opportunity, we will only accelerate the current situation and economic crisis.”

Back at Hussain’s home, about a mile from the devastated port, the family is hoping the blast that shattered their house will also blow up Lebanon’s political paralysis.

“It should be our government helping us, but we have nothing to expect—we don’t even have a real government,” Hussain said. She stood by her 5-year-old son, Ali, who is still startled by any loud noise in the neighborhood. “Every day, my children are asking if there will be another explosion, and I honestly don’t know what to tell them. I’d like to ask our leaders: ‘Could a similar disaster happen again?’”