The biggest rallies in years are risking the wrath of royalists eager to use the lèse-majesté law.

BANGKOK—“Over here, this is the good people,” said one among a few dozen royalist supporters, who then gestured to the north end of the Democracy Monument memorializing Thailand’s 1932 revolution—where the far larger pro-democracy groups were just beginning to gather at 1 p.m. on Sunday—and added, “Over there, not good.”

Within a few hours the band of around 60 royalist supporters holding golden-filigree portraits of the royal family and waving Thai flags retreated from what organizers claim were 20,000 citizens chanting, singing, and reenacting in impromptu plays past tragedies when protesters were massacred. By the time the pro-democracy protests began in earnest at 4 p.m., the small right-wing royalist contingent had disappeared.

After weeks of rising tensions and days of light monsoon season rains, demonstrators of all ages gathered under clear skies on Sunday. The rally, spearheaded by the Free People student movement that arose with earlier protests in July, follows weeks of increasingly bold demands from student-led groups and ramped-up government intimidation.

The protests began prior to COVID-19 lockdown as a response to the dissolution of the liberal Future Forward Party in February. Around the 2019 Thai elections in March of that year, the government led by Prime Minister Prayut Chan-o-cha—which took power in a 2014 military coup and installed a system in which no party can take power without the consent of the military—used a variety of legal tools to harass the opposition, particularly the Future Forward Party and its leader, the charismatic mogul Thanathorn Juangroongruangkit.

When COVID-19 began to abate in Thailand, the protests resumed around the country in July with the Free People movement, then known as Free Youth, staging a protest at the Democracy Monument to demand the newly reshuffled cabinet’s resignation, the dissolution of parliament, and the drafting of a new constitution—of which Thailand has had 19 since the 1930s. But the stakes got even higher on Aug. 3, when some protesters began to suggest monarchical reform.

Thailand’s late king was widely popular, but the rule of his son and current monarch King Maha Vajiralongkorn of the 238-year-old Chakri dynasty has drawn controversy. Apart from his raucous youth, divorces, and consolidation of power—all of which have drawn condemnation from protesters—the monarch also spent the coronavirus pandemic in his residences in the Bavarian Alps at a time when Thailand has suffered intense economic problems.

Mentioning the king is a high-stakes gamble in Thailand. Section 112 of the Criminal Code, also known as the lèse-majesté law, forbids criticizing the monarchy, and it has been used more than 90 times since the coup in 2014—with sentences as long as 15 years handed down. But while the lèse-majesté law is the most infamous, in practice the government more commonly uses the Computer Crime Act and charges of sedition against opponents, charging them for public statements and even Facebook posts.

That makes any demonstration a risky endeavor. As the crowd grew by the Democracy Monument, the protests got off to a tense start, with protesters reenacting past killings and shouting at police officers. 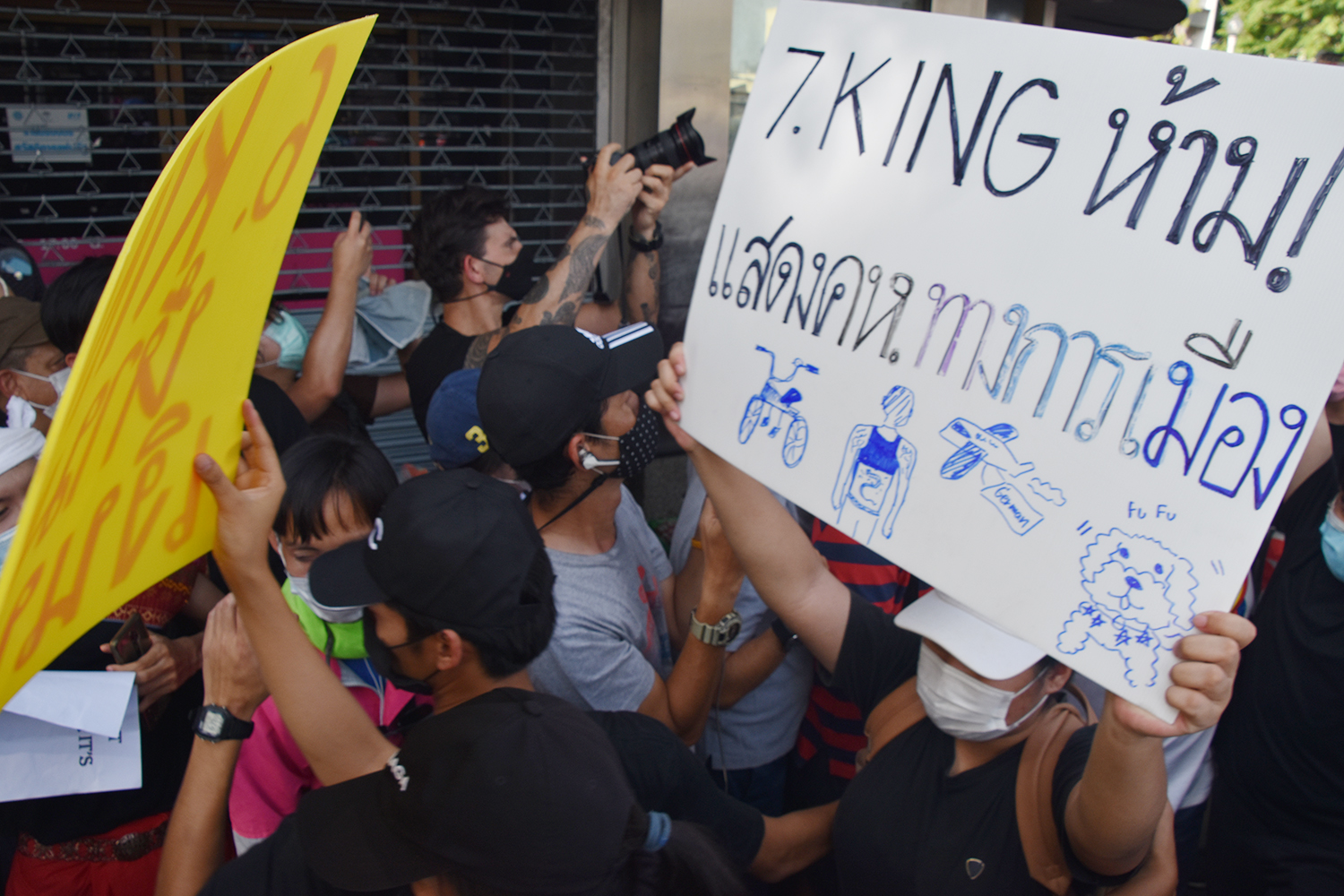 A protester carries a sign saying “The king shouldn’t express his own political opinion,” surrounded by doodles referring to the king’s tattoos, frequent visits to Germany, and pampered dog, Foo Foo. Phoebe Storm for Foreign Policy

Two days before the protest on Sunday, the student leader Parit “Penguin” Chiwarak was filmed being carried by police officers to be charged with sedition under Section 116 of the Criminal Code. Despite bail conditions, Penguin made an appearance at the protest, waving through an apartment window. The lawyer Anon Nampa and student activist Panupong Jaadnok were also arrested prior to the event and face further charges.

“Without freedom, we have nothing. We Thais want real democracy,” said Fai, 23, using only one name for anonymity, in a coffee shop on Dinso Road as the protests begin, thumbing through paper signs written in Thai and English reading “Blood on Your Hands” and “Prayut Get Out.” Behind him, a police officer picked up an iced Americano. “How we get this I do not know, but this is how we start,” Fai added.

The King Is Dead, and Thailand’s Storybook Monarchy Might Be Next

As Thailand mourns its revered King Bhumibol Adulyadej, the public braces for an uncertain future.

After chants, speeches, and stirring commentary from a charismatic transgender presenter, the protests took on a concert atmosphere as the sun set, complete with rock ballads, comedy, and a surprise performance from Rap Against Dictatorship, famed for their popular and combative stance against the military government. Protesters waved their phones with the music in solidarity as night fell.

Even as the Criminal Court announced arrest warrants for 15 leaders during the protest, the attitude remained jubilant and triumphant into the evening, as the protest leaders planned to give themselves up to police as an act of civil disobedience.

The protest offered a rare opportunity to bring up topics usually silenced under a conservative junta. The Women for Freedom and Democracy group set up a base to the far west of the Democracy Monument, where supporters of LGBT rights, sex workers’ rights, and women’s rights converged to write stories in crayon on a tarpaulin.

“If we have true democracy that means we can have true equality too. LGBT people do not have true rights in Thailand,” said a 21-year-old student protester from Chulalongkorn University wearing a rainbow LGBTQ pride flag as a cape. When asked for his name, he waved his hand over the crowd and said, “Today, my name is Victorious.”

Six hundred police officers with the Metropolitan Police Bureau were sent to the site to ensure security and prevent violence among protesters, police spokesman Kissana Phathanacharoen said, adding that the authorities would be ensuring that protesters follow the law, including restrictions under the COVID-19 emergency decree.

As Thailand nears its sixth month under the pandemic emergency decree—despite not having a single community transmission since May—the continued emergency measures have caused concern.

“With this COVID economy, it is difficult,” said a 21-year-old protester who asked to be referred to as Alex. “We want to decide for ourselves.”

“I was very sad to see this Future Forward Party go away like this” added Alex, who said he attended the February protests. “We want to speak out. But how can we?”

It is not just at home that protesters face danger. Nationalist forces have far-reaching powers under Southeast Asia’s dictator cabal, which, for example, enabled the abduction by armed men of the Thai pro-democracy activist Wanchalearm Satsaksit outside his home in Phnom Penh, Cambodia, while he was living in exile. He is believed by some to be dead, but his sister maintains hope he is alive. 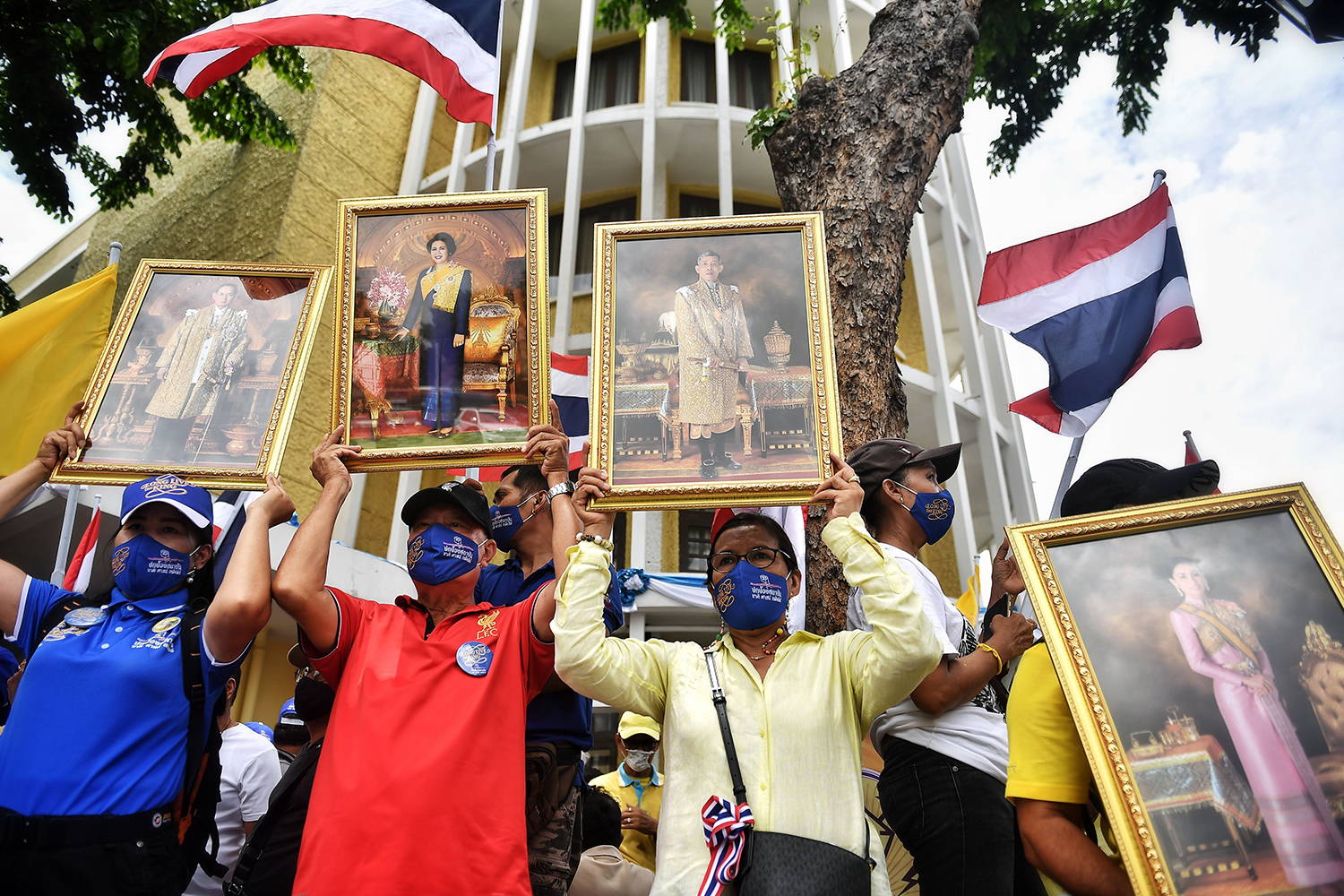 Pro-royalist protesters hold pictures of members of Thailand’s royal family in Bangkok on Aug. 16 ahead of anti-government protests in the Thai capital. LILLIAN SUWANRUMPHA/AFP via Getty Images

Official opposition to the protests took a familiar form, with government loyalist Sen. Somchai Sawaengkarn, appointed to his position by the junta, proposing authorities investigate the protest’s funding, questioning how the demonstrators could have afforded the giant LED screen on display during the protest. He added that bail should be revoked for those arrested under the sweeping sedition laws.

The specter of the 1976 Thammasat University massacre, an attack on students and leftists in which dozens were killed and some hanged from trees by royalists and paramilitary attackers aided by police, also hangs over events. Thai newspapers and royalist forces began intimating what a shame it would be if something of this nature were to happen again. High-profile Gen. Apirat Kongsompong said of the protesters, “The coronavirus can be cured, but the disease of chung-chart (nation-hating) cannot be cured.”

While stressing they do not wish to end the monarchy, protesters have submitted a 10-point reform plan that includes limits to the palace budget, scrapping the lèse-majesté law, ending political indoctrination in schools, and investigating those who have been disappeared for slights against the monarchy. While some signs and costumes during the Aug. 16 protest did directly address the topic of the monarchy, there have been attempts from right-wing and royalist groups to paint the entire opposition as anti-monarchy.

The Coordination Center of Vocational Students, a pro-monarchy group, vowed prior to the protest to record video and audio in case anyone should say or do anything insulting to the monarchy.

The police, too, were on the lookout for so-called third parties in the protest, according to the Bangkok police department’s Maj. Gen. Somprasong Yenthuam. However, as the day wore on, police sat in the alleyways surrounding Ratchadamnoen Avenue, eating, smoking, and taking pictures of the sunset on their phones.

“It is the biggest protest ever after the coup in 2014. I am really surprised by the number of people joining the protest as well as the diversity,” said the student protester Surachet Suanchabok, who is studying political science at Chulalongkorn University. “Not only the youth anymore but also the working class, the elders, the LGBTQ+, the feminists. … All share the same goal, which is justice. I do not think that our demands are too much to manage to become a reality.”

Tyler Roney is a journalist in Thailand.

The King Is Dead, and Thailand’s Storybook Monarchy Might Be Next

As Thailand mourns its revered King Bhumibol Adulyadej, the public braces for an uncertain future.