The Woman Who Started a Revolution in Minsk

As protests swell across the country, Belarusians are calling for the return of the unlikely politician Svetlana Tikhanovskaya.

MINSK, Belarus—Svetlana Tikhanovskaya is an unlikely hero. Barely a month ago, she was the supportive wife of an outspoken blogger and a political unknown. She is uninterested in power and awkward with the media. But in just a matter of weeks, Tikhanovskaya has transformed into a veritable stateswoman, spearheading a formidable political campaign to break the political morass in Belarus. Now she is on the cusp of toppling the man known as Europe’s last dictator.

Tikhanovskaya, who challenged President Aleksandr Lukashenko in an election on Aug. 9, was forced to flee Belarus for Lithuania in the days after the vote. She resurfaced in a video pleading with protesters to accept the official results that declared Lukashenko the winner. For a moment, the prospects for change in Belarus looked fragile. Yet her departure has not stifled the opposition as feared.

On Sunday, more than 100,000 demonstrators gathered in central Minsk to protest the official election results. And in recent days, companies across Belarus have called strikes, paralyzing the economy—even in sectors Lukashenko considered his heartland. In the streets of Minsk and the parks of Brest, calls for Tikhanovskaya’s return have increased. On Monday, she indicated that she would be ready to “act as national leader.” 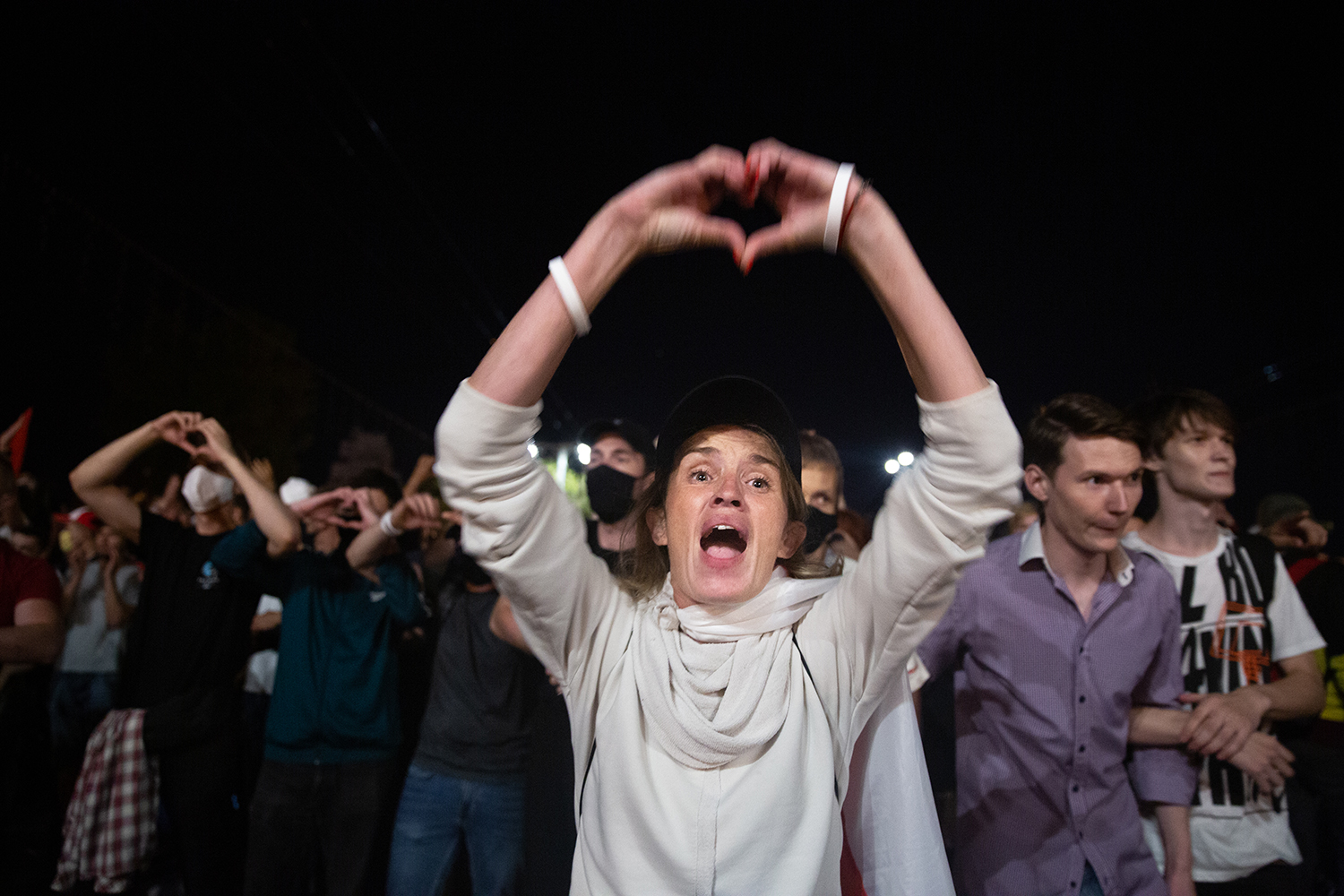 A woman raises her hands to form a heart—the symbol demonstrators have used to show their peaceful intentions—and begs police to put down their weapons and join protesters in Minsk on Aug. 9.

Tikhanovskaya was never destined for political life. As a child, she was evacuated after the Chernobyl nuclear accident in 1986 to rural Ireland, where she polished her English, and has often returned to visit the family who took her in. “Inside me, I’m still that shy girl that doesn’t want power, that’s not a politician, and I don’t want to be here—in politics,” she said ahead of the election.

The condensed, six-week campaign seemed to wear on Tikhanovskaya, with cross-country road trips and a wall of intimidation and harassment from the government. Her husband, who was barred from standing for the presidency in May, was languishing in prison. She hadn’t seen her children in weeks, having sent them to the European Union for their safety a short time into the campaign.

It is often said the best leaders are those reluctant to take the reins of power. After her husband’s arrest, Tikhanovskaya stepped in and charged full throttle at Lukashenko, who has ruled Belarus for 26 years.

In a converted factory in Minsk’s Horizont neighborhood three days before the election, she recorded the final video of her campaign, titled: “A message to the Belarusian people.”

“Belarus does not belong to politicians, parties, or groups. Belarus belongs only to itself and its people,” she rehearsed. “Belarus is not a property. A country can’t belong to one person.”

Tikhanovskaya’s campaign was a hybrid of three opposition campaigns: her husband’s; that of the campaign of former banker Viktor Babryka, also jailed after announcing his candidacy; and former ambassador to the United States Valery Tsepkalo, who fled to Moscow under fear of arrest. Her manifesto consisted of little more than a pledge to free all political prisoners, including her husband, and to hold fresh elections within six months—allowing Belarusians to debate their country’s future on open terms.

A troika of women with Tikhanovskaya at its helm formed the engine of the campaign, with Maria Kolesnikova, a former music producer who worked on the Babryka campaign, and Veronica Tsepkalo, the wife of Valery, alongside her. They set aside political differences and embraced the simplest of aims: to force Lukashenko out and hold fair elections. 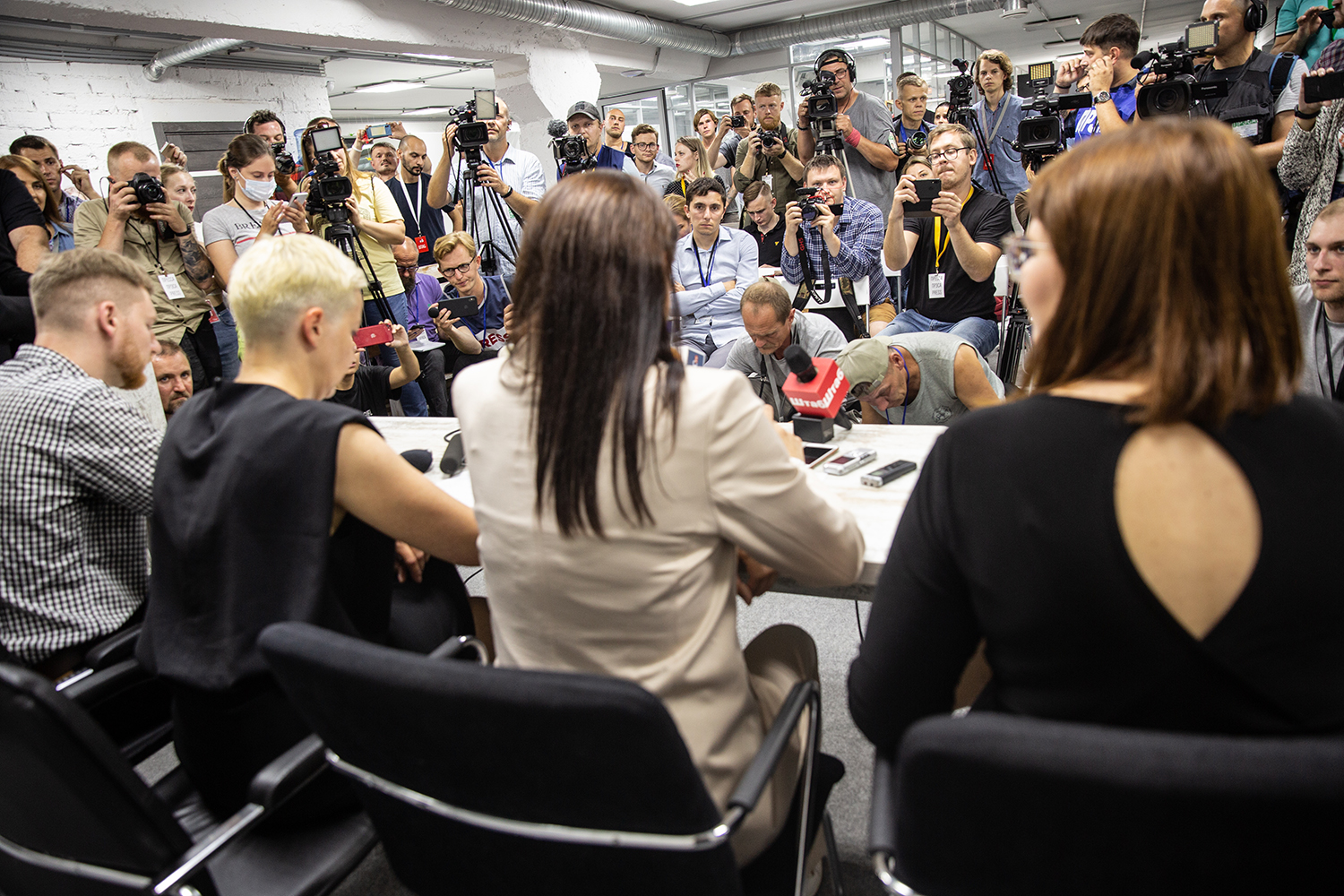 Tikhanovskaya (center) attends a news conference in Minsk on Aug. 9.

The United Campaign headquarters, in a chic neighborhood of eastern Minsk, was a dizzying mixture of hope and nerves on election day. The campaign had stuck to a simple strategy of competing in good faith, refusing to endorse strikes or protests until after the polls had closed and official results were announced—giving Lukashenko’s regime zero reason to clamp down on their efforts.

Information coming in from across the capital was promising. Unofficial preliminary results from dozens of polling stations across Minsk showed that Tikhanovskaya had received in some cases five times more votes than Lukashenko. In the HQ meeting room, Kolesnikova jumped around in excitement, embracing the campaign’s lawyer, Maksim Znak.

The campaign soon called a press conference and announced some of the results to international media. Campaigners erupted into applause as campaign spokesperson Olga Kovalkova, read out one result. “Polling Station 37, Pervomaisky district … Alexander Lukashenko 297… Tikhanovskaya 848!”

“Everyone always tells us the same, all these three months: that you can’t do anything, that the results are already decided by the presidential administration. But now we’ve seen what we hoped for. It seems the people that count votes are really aware of the opinion of the majority,” Ivan Kravtsov, a campaign coordinator for Kolesnikova said. “We are seeing that the system fails.” 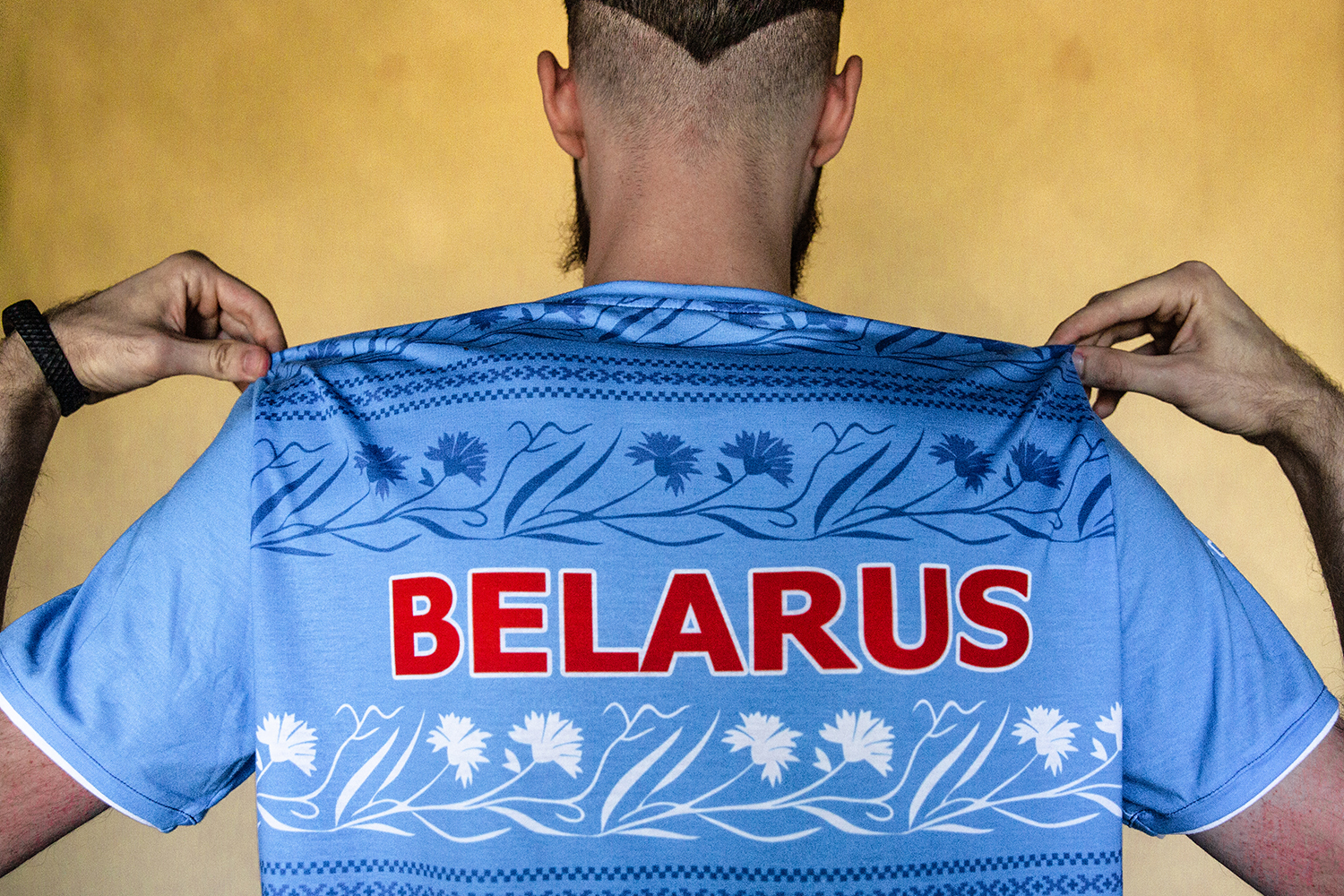 During the election, Nick, a former Belarus international basketball player seen in Minsk on Aug. 7, volunteered for Honest People, an independent organization that observes polling stations. He and his colleagues reported large disparities daily, indicating that the government was falsifying ballots. 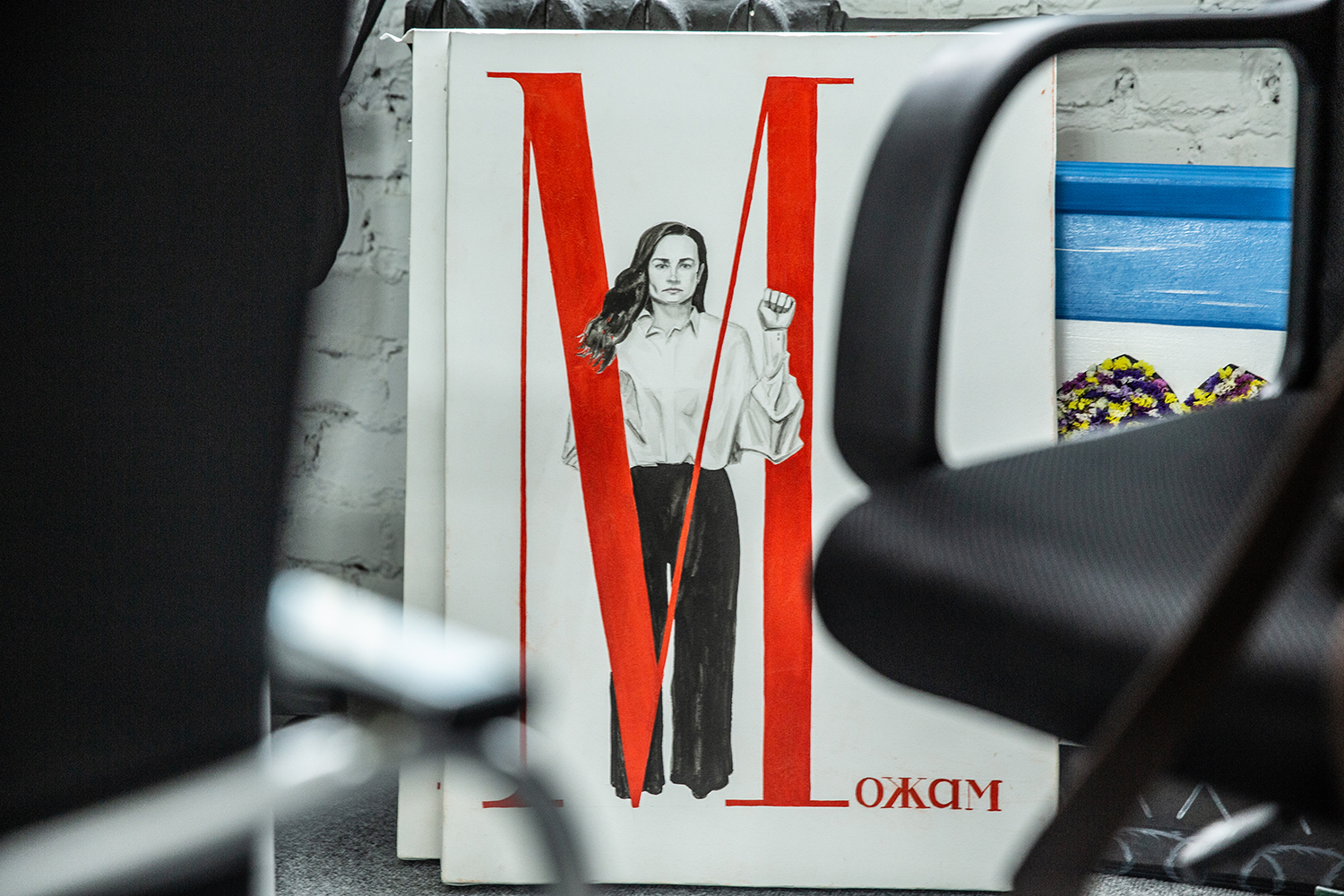 The opposition headquarters in Minsk are quiet after Lukashenko’s declared landslide victory on Aug. 9, with a painting of Tikhanovskaya discarded on the floor.

The optimism was intoxicating, but Lukashenko had already won the election, with widespread vote rigging apparently taking place earlier that week. In the days leading up to the election, thousands of polling stations opened early to give the elderly or those who might be busy or traveling on election day an opportunity to cast their votes. The greatest opportunity it provided was the potential for rigging the outcome in the absence of election monitors.

By the time the polls opened on Aug. 9, independent observers had already failed in a legal battle with the Belarusian electoral commission to be allowed into voting stations. Barred from entering the sites, thousands instead sat outside counting every person who went in. They cross-referenced those numbers with official figures from individual voting districts. The numbers didn’t come close to adding up.

One of the volunteers, Lera Kalesnik, coordinates a team of monitors at three polling stations in western Minsk. “On Thursday, we counted 161 people entering all three stations. Official numbers from just one station said 177 people had voted. That’s not counting the other two stations,” she said. “How did those extra 100 people vote? They didn’t enter the station. We didn’t take our eyes off the door.”

Honest People, an organization with ties to jailed candidate Babryka that oversees the observers, said similar irregularities occurred at polling stations across the country, with official numbers claiming more votes cast than people who had entered the stations—often by a large margin. As the five-day period of early voting ended, the government said 41.7 percent of Belarusians had already voted.

The Belarusian dictator bet everything on force. Now he's becoming a dangerous joke.

Massive violence in the wake of Sunday’s sham election has thrown a spotlight on Belarus and the growing backlash to a quarter century of one-man rule. 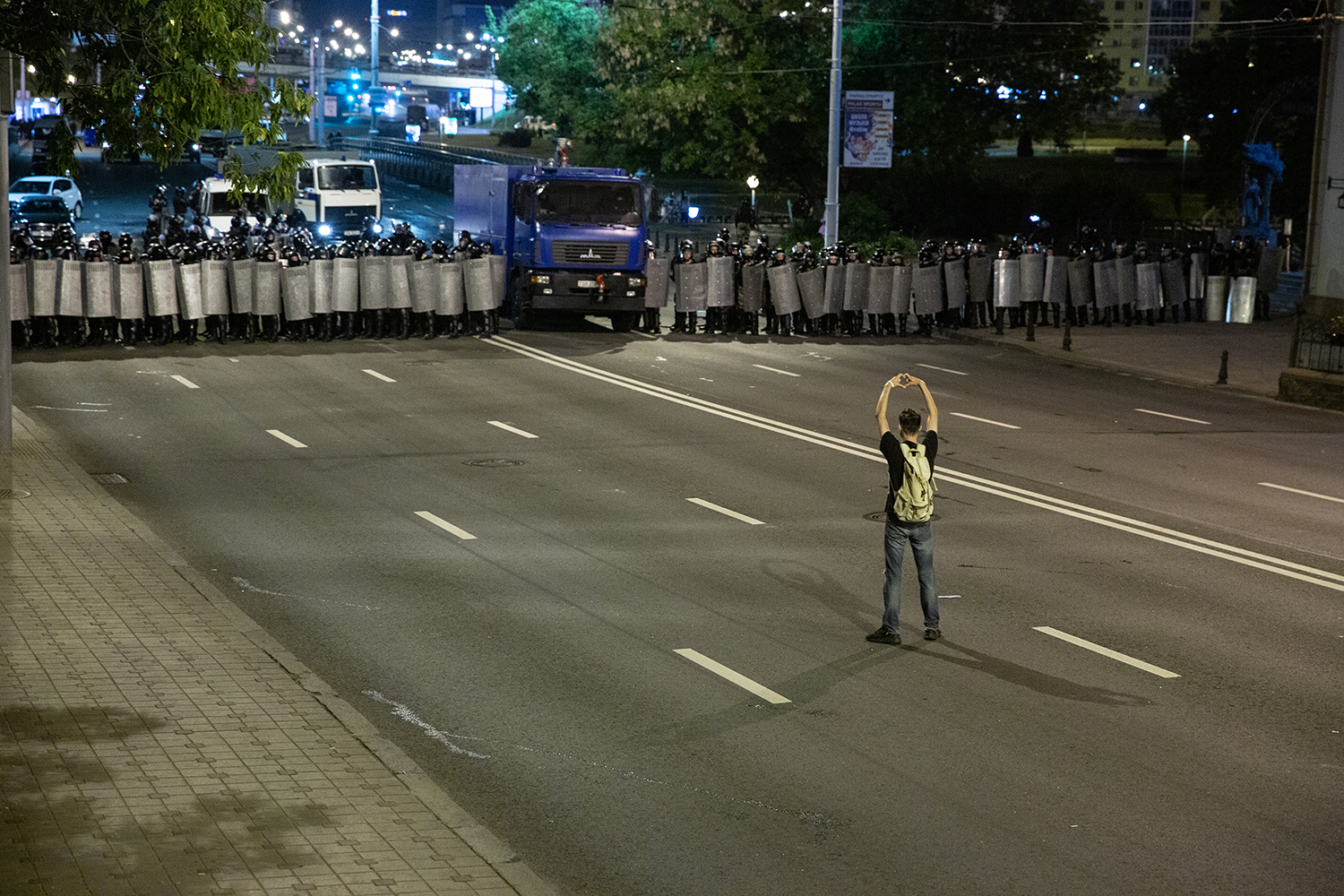 After riot police successfully dispersed the crowd using tear gas, flash-bang grenades, and water cannons, a man holds his hands up to form a heart during the first night of protests in Minsk on Aug. 9. 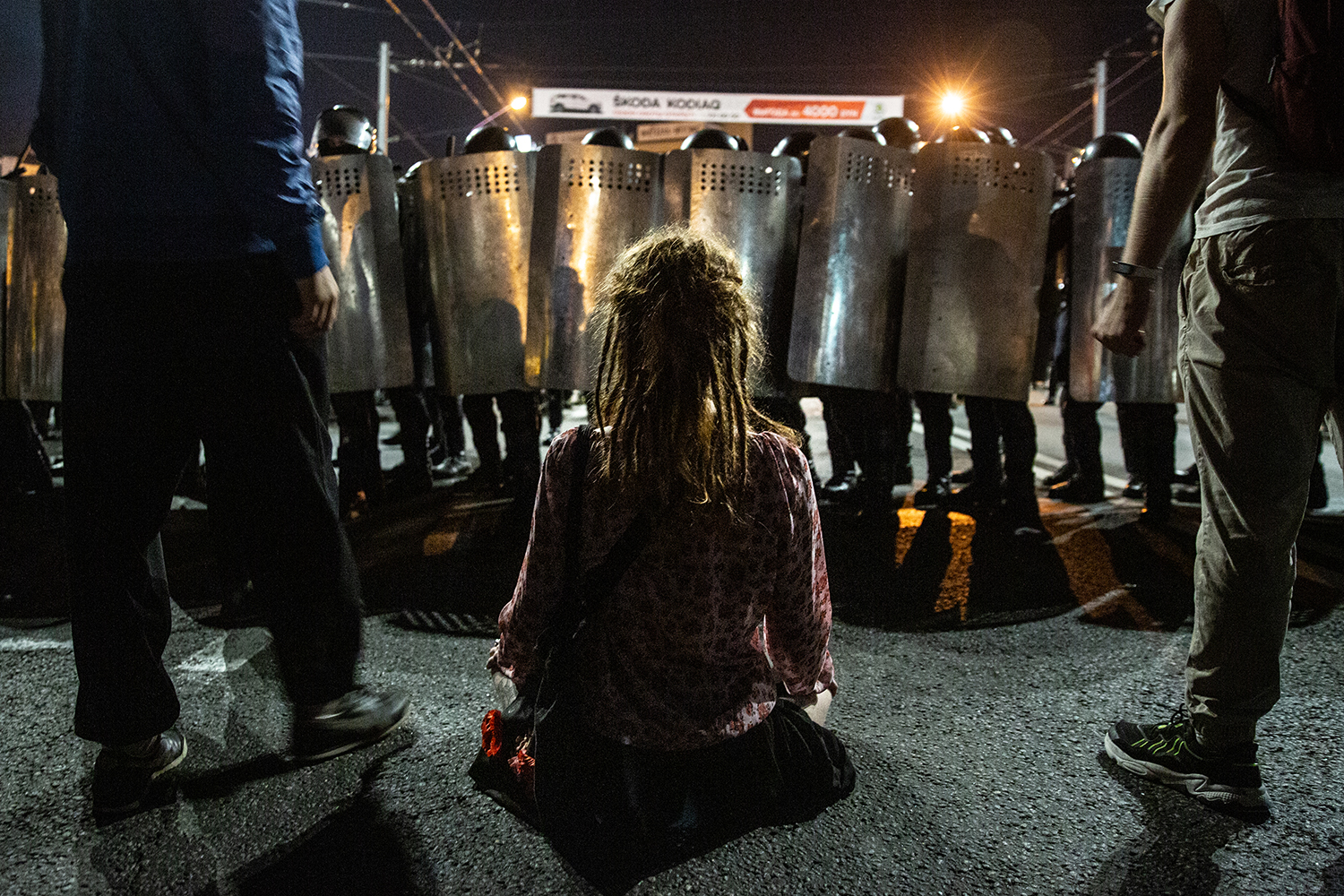 A woman sits in front of riot police as thousands march on Minsk to voice their anger at the contested election of Alexandr Lukashenko and his government on Aug. 9. 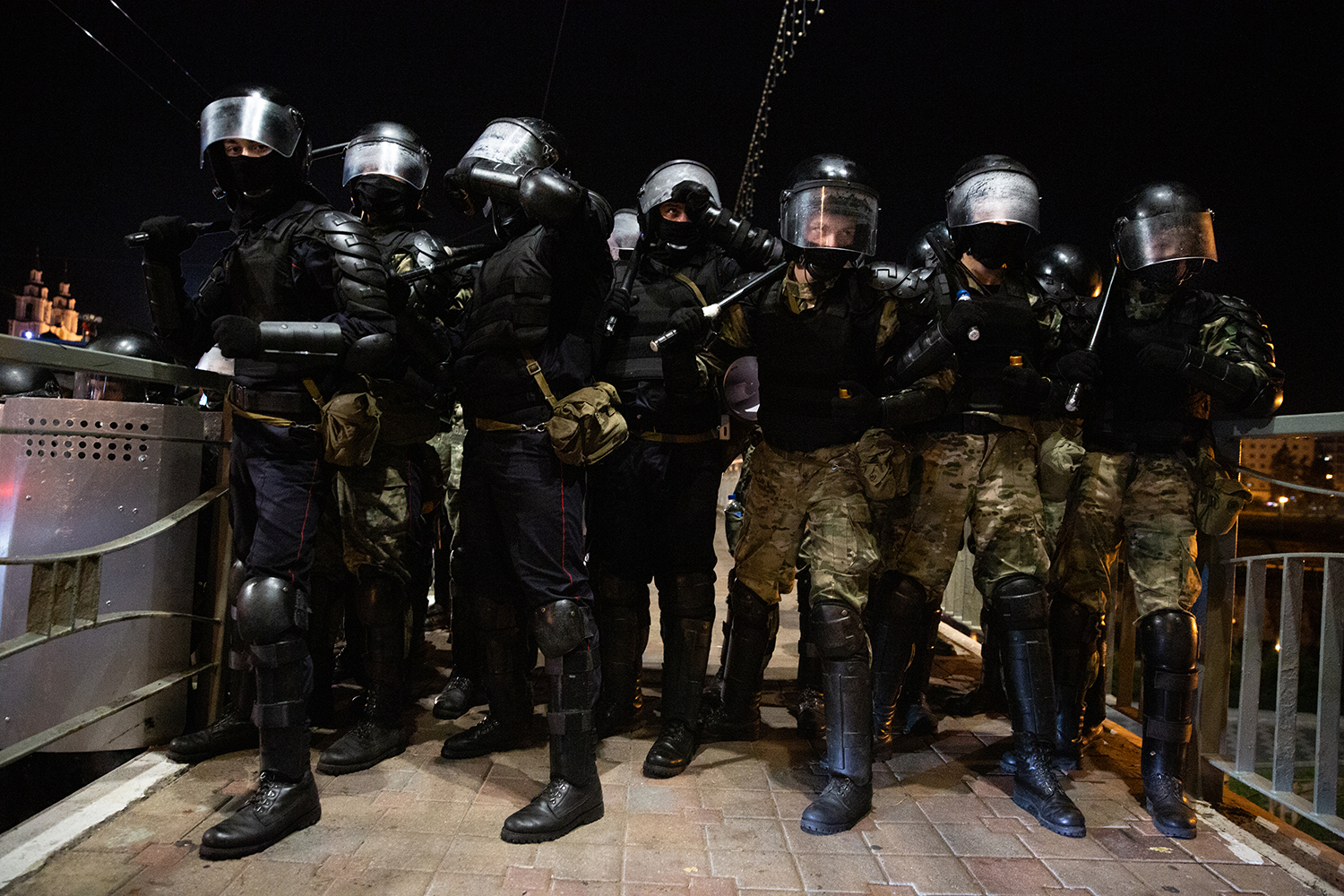 Riot police brace for impact as they square off with protesters in Minsk on Aug. 9.

Ahead of the election, indicators of the crackdown that would follow were everywhere. Veronika Tsepkalo fled to Moscow on the eve of the vote. The Belarusian security services, still called the KGB, detained Kolesnikova en route to dinner the same night—though she was released in time to order her main course—saying they had arrested her by mistake. In the week leading up to the election, KGB agents pulled hundreds of people off the street at random, forcing them into black transit vans. Videos shared on opposition Telegram channels show that some people were dragged kicking and screaming by masked men, while others went quietly.

Despite campaign pleas to hold the line until official results were announced, anger was already pouring onto the streets outside by 9:30 p.m. Many who had cast their vote for Tikhanovskaya didn’t need to see the official results to know that the election had been rigged. Small crowds began to assemble, and before midnight a sea of red and white flags flowed past Minsk’s Soviet monuments.

Families watched from their balconies, dropping bottles of water and candy to those marching below. Drivers unable to move through the crowd locked their cars and joined the procession on foot. Cars blared their horns. “Changes”—a Russian rock song from the 1980s synonymous with perestroika and now the anthem of Belarus’s own Red and White revolution—echoed out of apartment blocks and from car stereos.

The peaceful march, along with others across the country, was met with unremitting violence. Demonstrators were unprepared for the teargas and the flashbangs. But dozens of masked men were deployed from dark green paddy wagons, chasing and beating anyone they could catch. By Thursday, at least 6,700 people had been detained, according to the Interior Ministry. 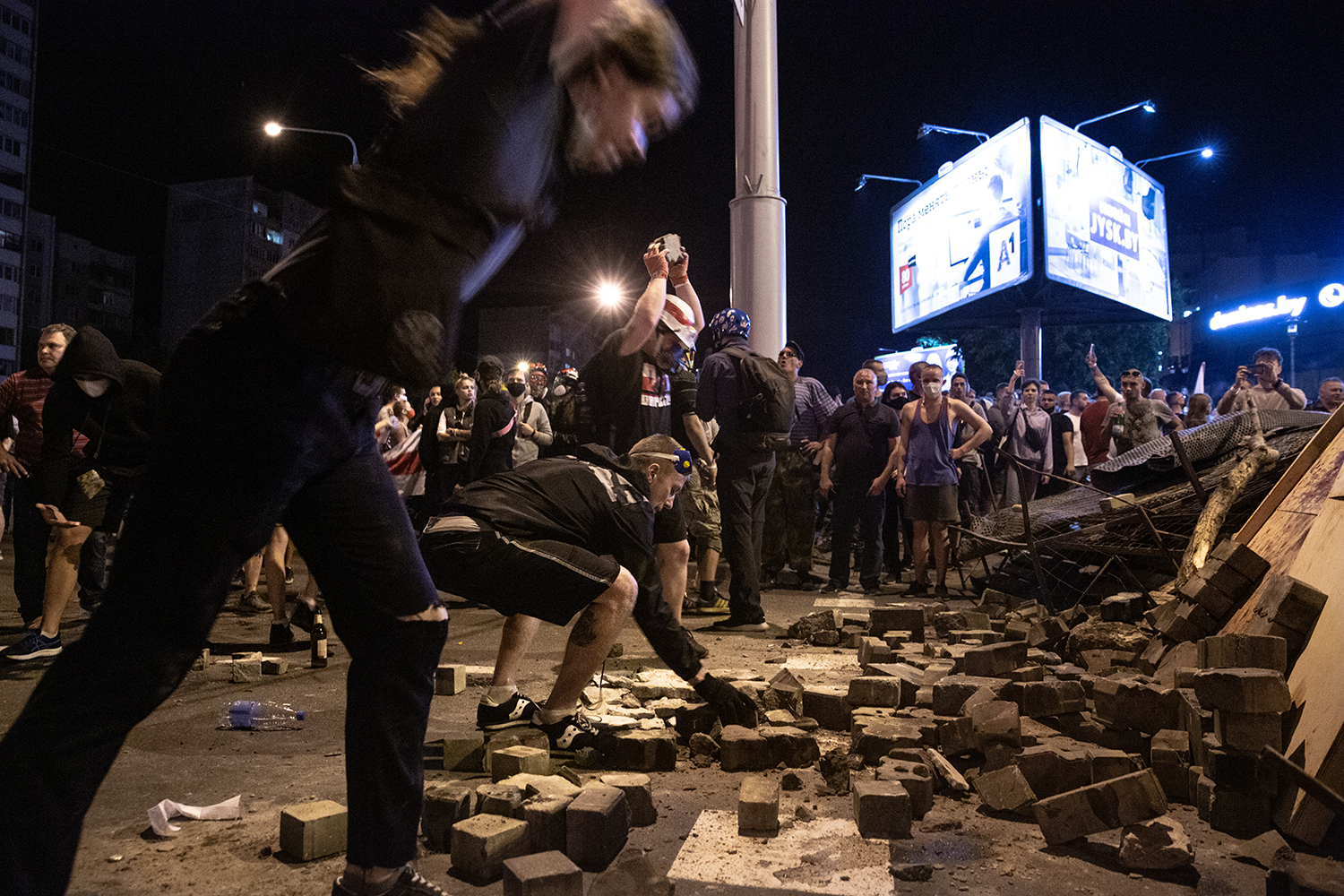 Protesters smash bricks into smaller pieces for ammunition to throw at riot police during a second night of protests after the election in Minsk on Aug. 10. 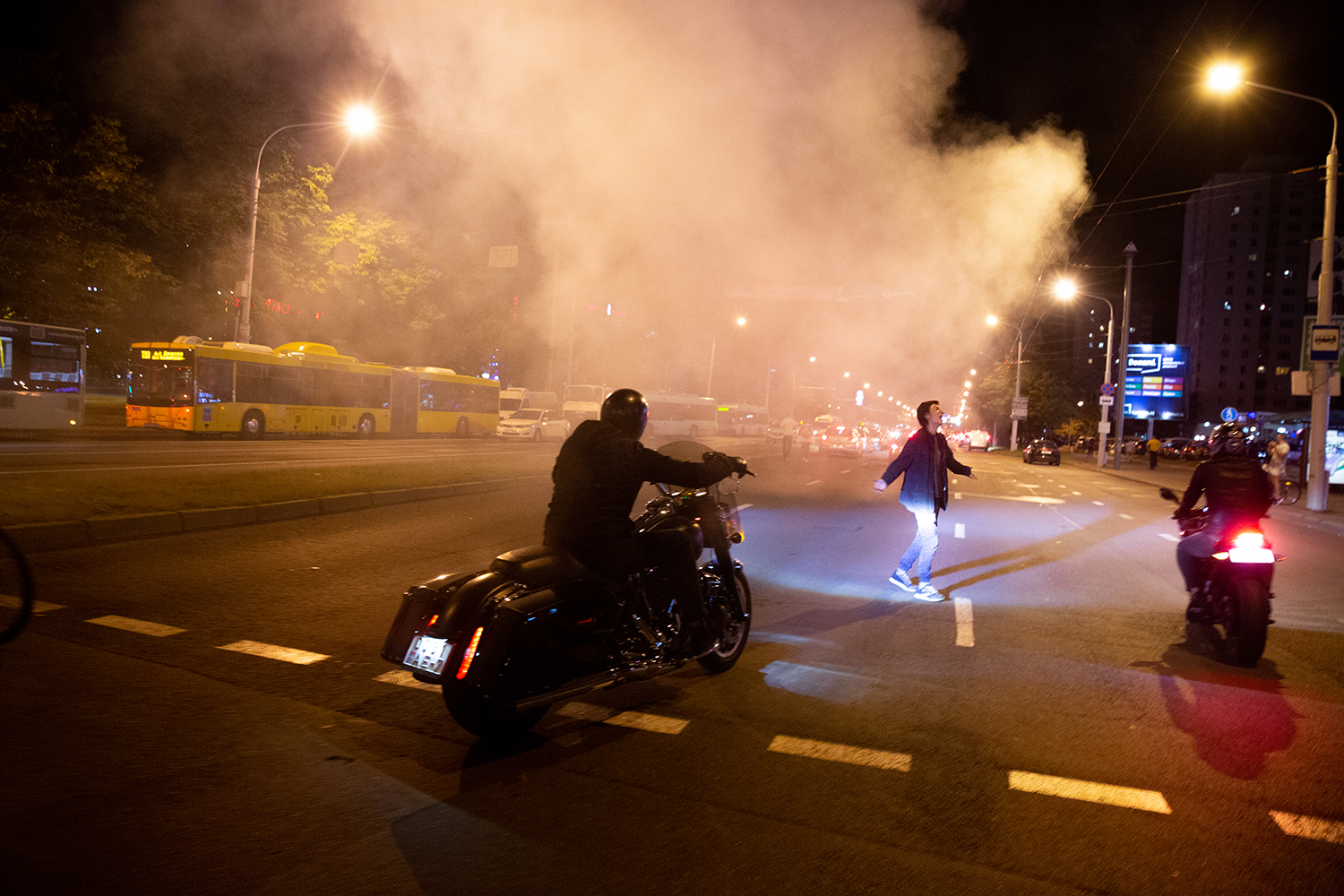 protester screams as he walks through dissipating burnout smoke in Minsk on Aug. 10. During demonstrations, masked riders on motorbikes would screech their tires, creating clouds of smoke before speeding away. 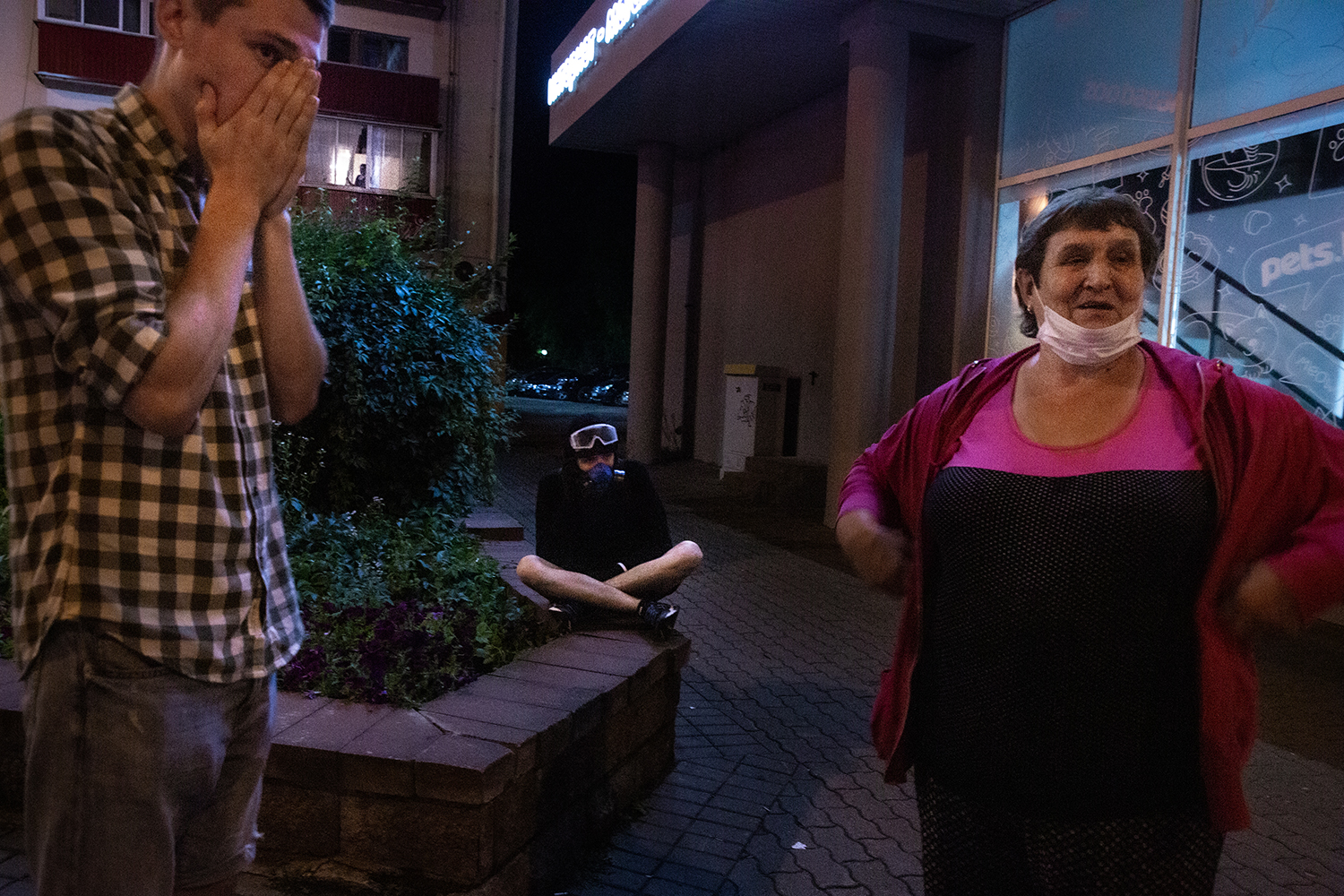 People react in shock after being engulfed in tear gas in Minsk on Aug. 10. In the distance, a resident pulls back her blinds to survey the street scene.

The system was unable to handle the logistics of arresting so many people, released detainees told Foreign Policy. One activist said he had spent the night standing blindfolded against a wall in the courtyard of a police station with dozens of others because all the cells were full.

The official results, released by the Central Election Commission on Aug. 14, said that Lukashenko had won with 80 percent of the vote, while Tikhanovskaya received just 10 percent. By then, Tikhanovskaya had already been forced to flee. She eventually surfaced in a video, hinting at being forced to make a “choice” and calling on the protesters to respect the results. Campaign staffers say that her children may have been threatened.

Others associated with the campaign also left the country within hours of the triumphant Sunday night press conference. Of the troika, only Kolesnikova remains in Belarus, along with a handful of aides who vowed never to leave the country. Just 24 hours after polls closed, the United Campaign headquarters were all but abandoned.

As the organized opposition disintegrated, protests spread beyond Minsk. Opposition Telegram channels, some with more than 2 million followers, have proved effective at coordinating rallies in Tikhanovskaya’s absence. Workers at dozens of state-owned businesses have walked out, including employees of Belarusian state TV—a bastion of regime propaganda. The Belarusian march goes on, and those marching chant Tikhanovskaya’s name. They want her back. Yet as Vladimir Edvin, a 29-year-old unemployed mechanic, said, “We’ll march with or without her.” 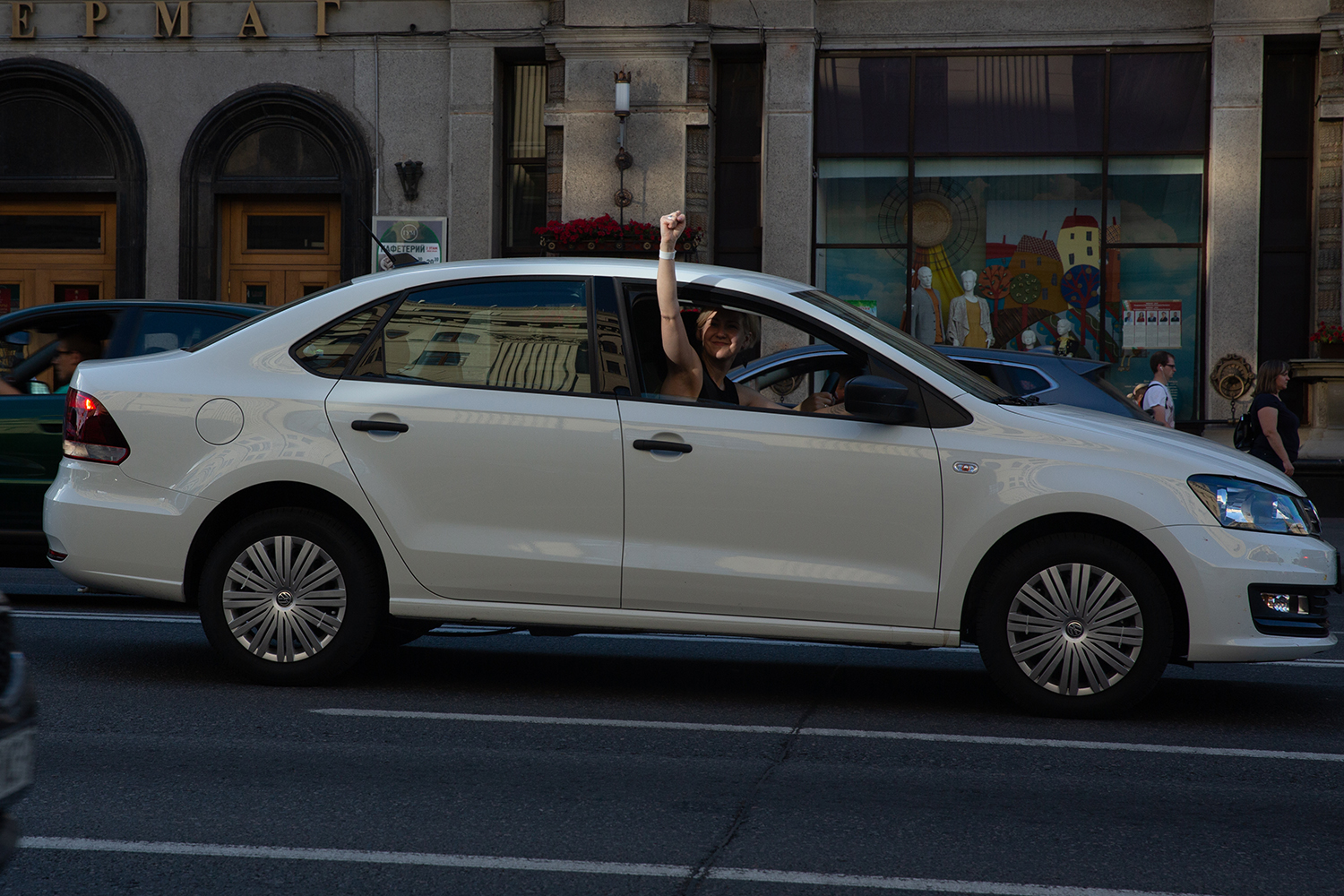 A passenger wearing a white armband (the sign of support for Tikhanovskaya and the opposition) catches the evening sun on Aug. 7. Though protests in Belarus are illegal, during the build-up to the election hundreds of cars would drive down Independence Avenue at 7 p.m. each night holding down their horns. Pedestrians silently raised their fists in solidarity—some were dragged into blacked-out vans and detained for the act of protest.

Gareth Browne is a British journalist based in Lyon, France. A graduate of the University of Exeter, he has reported extensively from Iraq, Syria, and Yemen. Twitter: @brownegareth