The cover of Jim Sciutto’s new book, The Madman Theory, depicts a blindfolded U.S. President Donald Trump with a bat, ready to take a swing at the world-turned-piñata. Sciutto’s previous work, The Shadow War, explored the threats Russia and China posed to the United States—now, he’s turned his attention around to consider America’s own contribution to global instability.

The cover of Jim Sciutto’s new book, The Madman Theory, depicts a blindfolded U.S. President Donald Trump with a bat, ready to take a swing at the world-turned-piñata. Sciutto’s previous work, The Shadow War, explored the threats Russia and China posed to the United States—now, he’s turned his attention around to consider America’s own contribution to global instability.

Well before he assumed office, Trump made clear he would operate differently and set out to break conventional wisdom when it came to foreign affairs. NATO was “obsolete,” until he decided after he entered office it was “no longer obsolete.” He toyed with bringing waterboarding back as a U.S. practice. And he questioned why he couldn’t speak by phone with the president of Taiwan. By the end of his first year, some policymakers attempted to make sense of his mercuriality by describing his approach as “madman theory.” 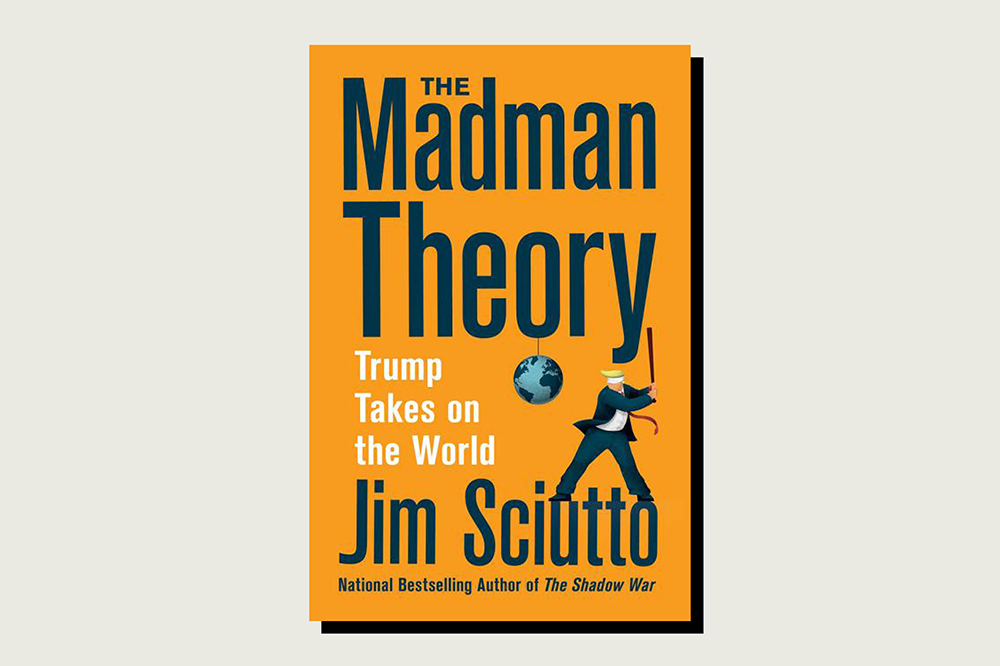 U.S. President Richard Nixon famously invoked the “madman theory” when he sought to convey to North Vietnam via his National Security Advisor Henry Kissinger his supposed willingness to use any means possible against them. But he was hardly inventive. An early reference shows up in Niccolò Machiavelli’s Discourses on Livy, when he notes that it can be “a very wise thing to simulate madness.” Whatever his character flaws, Nixon’s nuclear threat was a ploy, not a reality—albeit one that failed as badly as the rest of the country’s Vietnam strategy. Trump’s “madman” role, on the other hand, feels less simulated and much more lived. In his most recent whack at the piñata, he has targeted Germany, announcing the withdrawal of thousands of U.S. troops stationed in the country. Already, officials warn the process could take months, in what looks to be a move to buy time and mitigate the commander in chief’s bad call.

Sciutto describes Trump’s style of diplomacy as a tactic that “is sometimes by accident and sometimes deliberate,” a brand of brinkmanship whereby his unpredictability would corner opponents into concessions. But is a “madman theory” real if it is not always intentional? Peter Navarro, the president’s trade advisor and sycophant, believes it. “He’s a strategic chess player, seeing all angles and moves,” he enthuses. “There’s no preformed playbook. It’s jazz versus classical music.”

For a brief while, North Korea was held up as the chief success of this strategy. Trump’s see-sawing from insults to praise of Kim Jong Un brought the North Korean leader to the negotiating table in Hanoi, the president’s defenders argued. That looks a lot less credible when the North returned to testing and its usual explosive rhetoric. But Sciutto keeps score, chapter by chapter, country by country, from Pyongyang to Moscow to Beijing. Perhaps mindful of critics from the right who consider CNN, where he is chief national security correspondent, a partisan news outlet, he anchors his book on interviews with people who work or worked for the administration and, as he emphasizes, “chose to do so.” You will not find many Democrats in these pages, railing predictably against the president. Sciutto isn’t both-siding this—the withering words come from Trump’s own team.

Nearly every official has something unflattering to say about the president — except Navarro, who is also the only one speaking under his own name and still serving. The experts “failed on every foreign policy major initiative, in the last thirty years,” Navarro reminds Sciutto. “On China, on NAFTA, on Iraq, on Afghanistan.” The book also features Steve Bannon, one of the original orchestrators of Trump’s “Make America Great Again” campaign. (“We’ve been in managed decline now for thirty years by our elites,” he says.) They may be the usual suspects, but that’s because both wield significant influence—Bannon exited early from the White House, but he continues to speak to people in the administration multiple times a day.

On North Korea, the book relays the remarkable dynamic following Trump’s “fire and fury” and “bloody nose” comments against Kim, when Pyongyang and Seoul — sworn enemies — coordinated to avert existential disaster by overpromising on the possibility of a denuclearized North, if only the president would restart talks. “They were in cahoots,” a former official claims. Trump, Sciutto points out, was possibly “being played by both the ally and the adversary.” This is where, perhaps, the United States may have come closest to war. Measured by volume alone, two long, tense chapters cover the Koreas. And after three face-to-face meetings, Trump has little to show beyond the pomp, while North Korea has used these years to expand its nuclear program.

Do not expect an excoriation of all of Trump’s actions. Confronting China has become a bipartisan position, and regardless of who wins in November, “the upending of the US-China relationship is the element of Trump’s foreign policy least likely to change when he leaves office,” Sciutto observes. In his previous work, he described China as conducting a “shadow war,” one most Americans know little or nothing about. This is no longer the case, and bilateral spats frequently top domestic headlines now. Not a week goes by without a story of Chinese espionage, incursion, or “Wolf Warrior” diplomacy, often matched by an equally polemical United States.

If madman diplomacy is the approach, far less clear are what goals, if any, Trump has when it comes to China. His main obsession seems to be the same one he focuses on with almost all foreign powers: the idea that the United States is being cheated. China’s growing human rights crisis certainly isn’t a concern. When told of the so-called reeducation camps in Xinjiang, Trump’s former advisor John Bolton claimed the president essentially signed off on the idea to Chinese leader Xi Jinping.

Trump has even given up on his signature trade policy, and we’ll likely not see a “phase two” U.S.-China trade deal. Most observers assume his China policy has become an election ploy—a dangerous affair considering how badly Trump hates to lose. With the U.S. Navy passing through the Taiwan Strait and Chinese fighter jets entering Taiwan’s air defense identification zone in the last few weeks, a clumsy few minutes might change the course of history.

Meanwhile, the administration’s hostility to China—from initiating the trade war to its barely disguised racism when calling the novel coronavirus a “Chinese virus”—has done little to substantively check Beijing. The country continues to militarize the South China Sea, installing missiles on the Spratly Islands. It has essentially thrown out Hong Kong’s constitution and independence. And it continues to detain Uighurs in its western Xinjiang territory, despite growing global outcry. Trump’s bluster and swings have largely been ignored by Beijing when it comes to actual actions, while it has continued to simply press on with its own concerned nationalist agenda.

If the relative high point in Sciutto’s estimation is China, the nadir is Syria and U.S. abandonment of Kurdish fighters there. Sciutto’s account of the president’s own officials seeking creative ways to circumvent his withdrawal orders make for painful reading, but it serves as just one instance of many in this book when officials had to manage his worst decisions. It is a mortifying moment when the commander of the Syrian Kurdish military forces sends a message to his friends in the U.S. military absolving them of blame, implicit in the communication a judgment on how morally bankrupt Trump’s decision was. The author is clear here: Trump had a foreign-policy victory in his hands that he squandered. The United States had partnered with a capable local fighting force and had vastly diminished Islamic State territory and killed tens of thousands of its fighters. It ceded that progress, allowing Bashar al-Assad’s government, Turkey, Russia, and Iran to make gains.

The madman, it turns out, does not like war, and he measures military options from a bang-for-your-buck benchmark. He could pursue a one-off strike to kill Iranian Maj. Gen. Qassem Suleimani (and was lucky the decision did not spiral into something greater), but he generally prefers withdrawals over deployments—a consistency China may have noticed as it ratchets up tensions with Taiwan. What emerges in addition to the prevailing “madman theory” in these pages are a few steady strands the president sticks to, at least directionally, if unevenly, such as on military conflict.

Sciutto’s book is a first-rate attempt to map a method behind four years of foreign-policy mayhem. Even as he writes about the past, it’s difficult to shake the feeling he is constantly thinking—and worried—about the future. Regardless of the election outcome, America faces tough years ahead, much of it because of a madman’s impulsiveness.

Melissa Chan is a national and foreign affairs reporter who previously worked as a broadcast correspondent for Al Jazeera. She is a collaborator with the Global Reporting Centre and a term member of the Council on Foreign Relations.

Many former Republican national security officials just endorsed Biden. They will be hobbled in the fight for the party’s post-Trump future.