The Refugee Crisis Is Now a German Superhero Movie

The most persuasive portrait of Angela Merkel’s decision-making five years ago is featured in a new television film.

German Chancellor Angela Merkel’s momentous decision five years to welcome into Germany an unprecedented number of refugees from the Middle East and Northern Africa triggered political repercussions across much of the world. Only in Germany has it also caused pop cultural ferment. One bestselling book about Merkel’s decision has now inspired a hugely popular television movie. Any attempt to understand the legacy of the summer of 2015 must reckon with both works—and the crucial differences between them. The distortions of one are corrected by the artistry of the other, and they point to the same learning process that awaits the broader German public as it struggles to define the legacy of the events in question.

The book was published in 2017 by Robin Alexander, the political editor of the conservative daily Die Welt, under the title Die Getriebenen: Merkel und die Flüchtlingspolitik: Report aus dem Innern der Macht (The Driven Ones: Merkel and Refugee Policy: Report from the Halls of Power). It depicts Merkel as a naive and indecisive leader who, out of fear that the world might reproach the German people for slamming borders shut in the face of dark-skinned women and children, opted to allow the refugees in Hungary and Austria trekking toward Germany to pass into the country where they could apply for political asylum. She lacked the nerve, Alexander implies, to do the right thing as a self-confident German leader—namely to close the border with Austria, damn the consequences. This is the narrative that has settled into consensus among many Germans, especially in her own Christian Democratic Union party. 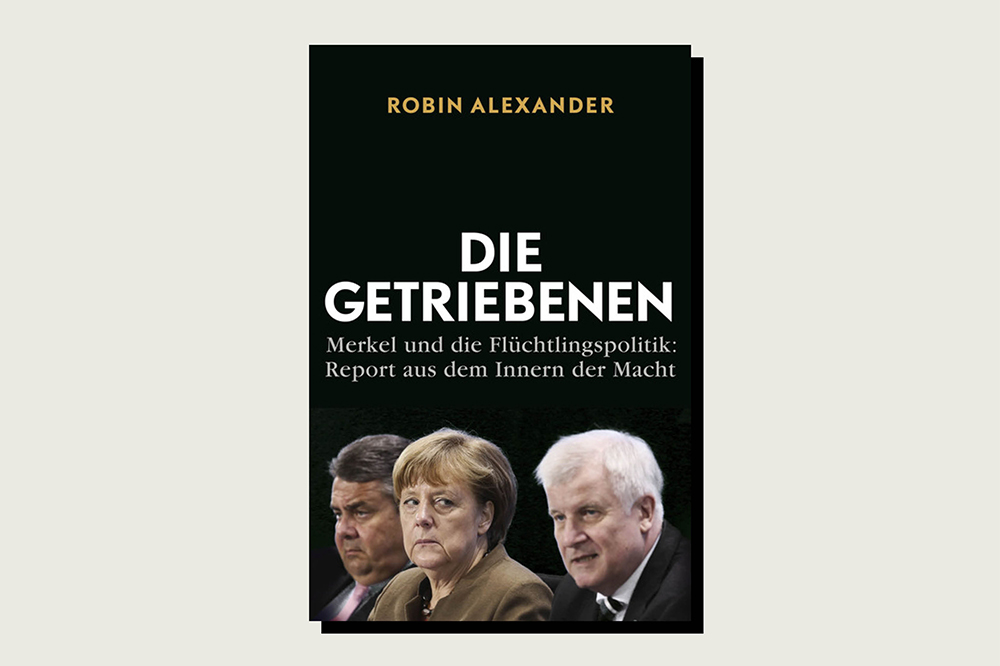 The hugely popular German film, directed by the filmmaker Stephan Wagner and broadcast earlier this year on the national television channel ARD, relies upon Alexander’s book for its screenplay (and its title) but places entirely new accents on the material. The movie chronicles the crisis from July to November 2015 told through the up-tempo, behind-the-scenes politicking of Merkel, her cabinet, German authorities such as the heads of the federal and border police, and the foreign leaders involved, such as Hungary’s Prime Minister Viktor Orban.

The movie earned positive reviews, but the actress Imogen Kogge, who plays Merkel, deserves special praise for transcending the source material. Whereas Alexander’s book depicts the chancellor as weak and indecisive, Kogge’s Merkel is principled and soul-searching. She is forced to confront a European Union refugee regime that is obviously broken beyond repair: People hoping to receive political asylum in the EU—a right not only enshrined in EU law but also in the Geneva Convention—are obliged to remain in the country in which they originally file their application until their cases are adjudicated. But as the number of arrivals grows, their interest in staying in Greece and Italy diminishes, and the authorities in those countries won’t impede them from leaving. It soon becomes clear that other nearby countries on the so-called Balkan trail don’t want to take them in either—which raises the question of what Germany will do. Suddenly, Merkel is under attack from all sides in Germany, including the hard-liners in her own government—and especially Horst Seehofer, the Bavarian premier at the time, who insists that the refugee inflows be stanched.

Kogge plays Merkel as on-the-ball, closely following events—but also conflicted from the beginning of the crisis. This is not simply a more morally praiseworthy depiction than Alexander’s own but, crucially, a more accurate one, as anyone who has seen Merkel’s fateful press conference on Aug. 31, 2015, would know. As the movie shows in detail, tens of thousands of refugees had crossed into Hungary that month before Orban could finish erecting the barbed-wire fence that aimed to cut off Hungary from Serbia. It was the scenes of atrocities—refugees camping out in horrific conditions in Budapest’s Keleti Station, the families drowned in the Mediterranean, and a truck that had been found along an Austrian highway with 71 asphyxiated refugees inside of it—that finally moved Merkel, not simply the calculation of reputational damage that would come from a hard-line response, which Alexander emphasizes. German conservatives, including figures in her administration, were shrilly insisting that the German border be sealed, even if that meant razor wire, tear gas, and German police units repelling destitute families. Federal police units were in place near the frontier, prepared to try to do it. But Merkel desisted: It wouldn’t have been possible, she concluded, to erect a wall like Hungary did—which took around four months to complete.

In the film, the voice of conscience was her husband, Joachim Sauer, whose evening pep talk strengthened the chancellor’s resolve. But this should not be taken to suggest the decision was purely emotional; Merkel understood that the events bore on the moral meaning of European law. The most widely quoted line from the press conference at which Merkel announced Germany’s open borders has been “Wir schaffen das”—“we can do this.” But her analysis extended beyond that phrase. As she pointed out, political asylum is a fundamental right enshrined in the German constitution, as is respect for human dignity, regardless of nationality.

There was also a more purely democratic reason—one that Alexander never acknowledged in his book: Welcoming the refugees was initially popular among Germans, especially in the Protestant and Catholic churches. “Our freedom, our constitutional state, our economic strength, the order in which we live together—this is what people dream of who have experienced persecution, war, and despotism in their lives,” Merkel said. “The world sees Germany as a country of hope and opportunity, and it wasn’t always that way.” In September 2015, opinion polls showed two-thirds of Germans in favor of her refugee policies. In communities across the country volunteers were erecting shelters, donating food and blankets, and taking families into their homes.

Merkel’s brave stance was not to endure. Hungary, then Croatia, and then Austria closed their borders. In the southern Mediterranean, EU patrols began to intercept boats smuggling migrants and return them to shore. Even countries such as Sweden and Finland, which had taken large numbers of refugees, signaled their limits. Though Merkel exerted all of Germany’s formidable muscle, the EU found it impossible to win approval to distribute refugees proportionally across the bloc. In Germany, conservatives attacked Merkel fiercely and shifted the tenor of the discourse. In the final scene of The Driven Ones film, Merkel gets the bad news that refugees stormed one of the halls in the Munich Exhibition Center, where crowding had led to tensions. Under her breath she mutters, “Scheisse.”

Indeed, the mood swung in late 2015. Merkel had neither backing in her own party nor the backbone to stick to her convictions. Seehofer’s public badgering lasted for years to come and fueled the fortunes of the young Alternative for Germany party, which soared in the polls from just 4 percent in early 2015 to over 12 percent in the 2017 general election. An option that in the film Merkel refuses to take in 2015, she does avail herself to in 2016: sitting down with Turkish leader Recep Tayyip Erdogan (whom she had called an authoritarian despot) to hammer out a deal in which the EU would pay for Turkey’s refugee camps and offer Turks visa-free travel into Europe in exchange for Turkey’s strict patrol of its western border. The EU also replaced marine operations designed to rescue refugees crossing the Mediterranean with naval ships and helicopters with orders to stop them from crossing. Countries in the Balkans as well as Morocco, Algeria, and Tunisia were labeled as “safe” states and thus no longer places from which their citizens could apply for political asylum.

By 2017 the inflow of refugees into Europe, and Germany, had slowed to a trickle, but the narratives that arose from the crisis persist to today. Merkel is accused of “opening borders” and inviting migrants into Germany when in fact they had long been on their way and crossed an Austrian-German border that had been open for decades. Moreover, in rhetoric that extends beyond conservative circles, the 2015-2016 refugees (and indeed most refugees) are deemed “economic migrants,” namely people looking for better jobs in richer countries. In fact, in 2015 85 percent of the 1.3 million people who applied for political asylum in Europe came from Syria, Afghanistan, Iraq, and Eritrea—all countries with wars in progress. About half of those asylum applicants who were granted either political asylum or a more temporary form of residence in Germany have filled open job and training position slots, thus contributing to the German economy since 2016.

Five years after the migration crisis, neither Germany nor the EU is any closer to formulating a new common refugee policy. The EU’s criticism of Turkey’s human rights violations are held in check by Erdogan’s control of the sprawling refugee camps in Turkey. When the EU monies dry up, as they did earlier this year, the Turkish president showed he is prepared to unleash waves of refugees in the direction of the Aegean coast to elicit a response. The right to political asylum is now de facto restricted in Europe—an unavoidable evil, it is said, to keep the far-right from flourishing. How many persecuted people from war-torn Libya can’t make it to EU borders to apply for asylum? No one knows. But they’re dying in the Mediterranean trying to do it.

What we also will never know is how Germans would have reacted had Merkel continued to defend her original reasons for accepting refugees in August 2015. If Merkel no longer offers that nuanced and ethical explanation herself, Germans are at least now fortunate they can find a reasonable enough facsimile on national television.

Paul Hockenos is a Berlin-based journalist. His recent book is Berlin Calling: A Story of Anarchy, Music, the Wall and the Birth of the New Berlin (The New Press).
Tag: Islamic State

Angela Merkel Is Back

As Germany takes over the EU presidency, the country’s chancellor has an opportunity to tackle some unfinished business.