Southeast Asia is Ground Zero in the New U.S.-China Conflict—and Beijing Is Winning

‘Under Beijing’s Shadow’ lays out in compelling detail how China is working to dominate the region.

Sometimes the signs are scattershot. Investigative journalists imprisoned for doing their job in Thailand or the Philippines. Another forest razed to make way for an industrial-size plantation producing rubber or palm oil in Myanmar or Laos. Fishers and farmers losing their livelihoods in Vietnam after the construction of more than a dozen dams along the Mekong River. A high-speed rail system under construction in Malaysia using credit that drives the country deeper into debt. Casinos rising up to transform Sihanoukville, Cambodia, into an Asian Las Vegas. 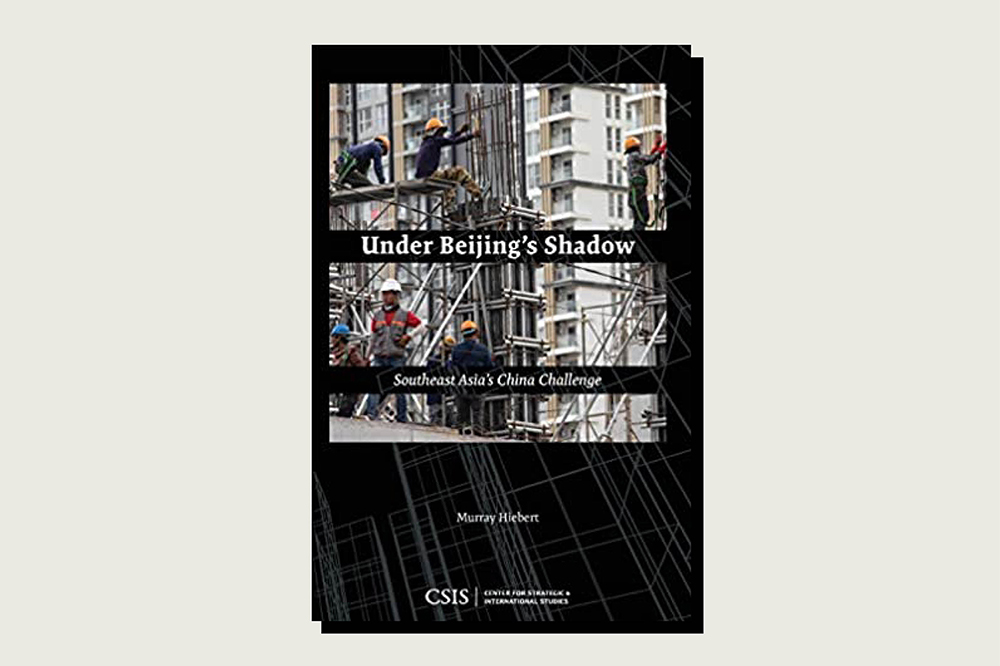 Chinese officials have become unabashedly open in their talk about a “Greater China” unconstrained by national boundaries, integrated into the Chinese economy, and anchored by Chinese communities across Southeast Asia. Many in the region worry that China is trying impose a new version of colonialism.

Traveling around parts of the region as I did last year, there was no mistaking the whiff of Chinese imperial arrogance—and of fear. Cambodians I’ve known for years whispered that their country is a Chinese colony in all but name. They told me about being disparaged by Chinese as “lazy,” and of more than a few Chinese-owned businesses in their country refusing to hire Cambodians even as they quash the local competition. In Vietnam, I was warned not to mention China in any of my public talks.

In his new book, Under Beijing’s Shadow: Southeast Asia’s China Challenge, Murray Hiebert performs the extraordinary service of uncovering, in precise and meticulous detail, what these countries are up against—and China’s strategy to pull each of them ever more tightly into its orbit. He describes how China, whose history with each country goes back centuries, pays close attention to its would-be client states, seeks weaknesses, and brings to bear all its leverage and enticements regardless of international rules or standards. Routinely, Beijing ignores human rights and the rule of law in order to ensure that authoritarian leaders friendly to China stay in power.

Hiebert’s approach is the equivalent to that of a fine craftsman who puts together a sophisticated timepiece before our eyes so we can see how the gears work. A former journalist and now a senior associate at the Center for Strategic and International Studies, Hiebert steers clear of punditry. He is also the rare authority who knows both sides of this issue from the ground up: Not only was he posted in Beijing at the Wall Street Journal bureau, but he also covered Southeast Asia for the Wall Street Journal Asia and the Far Eastern Economic Review, based in Hanoi, then Bangkok and Kuala Lumpur, Malaysia.

In Hiebert’s description of 21st-century Chinese encroachments, he isn’t presenting us with the familiar caricature of barbarians bearing tribute to the court of the Middle Kingdom. Today, Chinese expansion is clothed in the language of economic progress, regional cooperation, and cross-cultural ventures. It takes the form of special economic zones, growing tourism, and various loans and grants. Then there is the formidable Belt and Road Initiative, which routinely saddles countries with debt to pay for showcase projects that don’t meet their citizens’ needs. The soft power promise of cultural and scholarly exchanges draws the region’s elite into Chinese networks, often greased by nicely disguised bribes. Chinese military aid and joint exercises with local forces boost national leaders and ensure dependency on Beijing.
The Southeast Asian countries are pieces on a strategic chessboard that China has every intention to dominate.

What is in it for Beijing? Mainly, China is devouring the region’s resources: diverting and polluting the waters of the Mekong River with dams; razing forests to plant bananas and oil palms as far as the eye can see, an ecological disaster; and building high-rise after high-rise to launder illicit Chinese money. But at least as importantly, the Southeast Asian countries are pieces on a strategic chessboard that China has every intention to dominate.

The countries haven’t been entirely defenseless. Hiebert describes how each has developed strategies to pry economic benefits from China without giving up its independence—and not without success. “[I]t is stunning how challenging it has been for Beijing to use its growing economic muscle to get these projects off the ground,” Hiebert writes. “Even the poorest and weakest countries have been negotiating for years to shrink down China’s outsized ambitions, reduce costs, and keep the numbers of Chinese workers in check.”

Still, the results are mixed. Laos, Hiebert writes, is “sacrificing sovereignty for prosperity” by allowing unfettered immigration of Chinese. The most spectacular recent pushback against China, on the other hand, took place in Malaysia in 2018, when voters turned against then-Prime Minister Najib Razak largely because of a multibillion-dollar, high-profile project with China that was marred by corruption and inflated prices.

The stakes are high, especially for the United States. Hiebert reminds us that together, the countries of the Association of Southeast Asian Nations (ASEAN) have a combined population of nearly 700 million and a $2.8 trillion economy. U.S. companies invest more in Southeast Asia than in China, Japan, South Korea, and India combined. The U.S. military presence in the region is considered crucial to allies such as Japan and South Korea to protect trade, ensure peace, and counter Chinese aggression. In the growing global standoff between Washington and Beijing, Hiebert compellingly describes Southeast Asia and the South China Sea as ground zero.

Hiebert demonstrates how the rise of Chinese President Xi Jinping has turbocharged Beijing’s ambitions in the region. Since China is not yet powerful enough to challenge the U.S. Navy directly and isn’t attractive enough to have enlisted real allies, it has instead co-opted some of the region’s leaders through its organized corruption of the elite. One such leader is Rodrigo Duterte, the president of the Philippines, who was barely in office when he made a state visit to Beijing in 2016. He returned with $24 billion in loans and investment pledges as well as Chinese assurances that they had his back and would not interfere in the Philippines’ internal affairs. Hiebert connects the dots, showing how a green light from his powerful neighbor enabled Duterte to go after his critics with little regard for established law or human rights. (For Westerners, the most visible target has been the former CNN journalist Maria Ressa, convicted of specious charges of libel and tax evasion.) Repaying China’s favors, Duterte walked away from his predecessor’s hard-won victory at the Permanent Court of Arbitration in The Hague, which had ruled that China’s outsized territorial claims in the South China Sea had no legal basis. By abandoning the Philippines’ internationally ratified claim, Duterte has allowed China to ignore international law with even greater abandon, making a peaceful resolution to the standoff less likely.
As the antagonism between China and the United States reaches a new intensity, the region has only gained in strategic importance—for both Washington and Beijing.

Another leader who has been co-opted by China for geostrategic aims is Cambodia’s authoritarian Prime Minister Hun Sen, who in 2017 faced the real possibility of losing national elections. Deploying massive police and military power, and backed by Chinese money and aid, Hun abruptly shut down the opposition, independent media, and public protests. Hun rightly calculated that he could destroy most of the remnants of Cambodia’s democracy without serious international pushback. Ever grateful for Beijing’s support, Hun has blocked all attempts by ASEAN to coordinate a response against China’s claims in the South China Sea.

China was also steadfast in its support of Myanmar when the rest of the world condemned the latter’s lethal suppression of its Rohingya Muslim minority—which some observers have called genocide—in order to come closer to another strategic goal. The two countries have since revived the construction of a high-speed rail line across Myanmar, giving China its long-coveted access to a port on the Indian Ocean.

Under Beijing’s Shadow comes none too soon. While Chinese military activities such as those in the South China Sea have held the attention of the U.S. government, it is much less clear whether Washington has any real understanding of China’s expansive vision for exerting its sway over the countries of Southeast Asia—or whether Washington even cares. Before the United States’ retrenchment from global involvement that began during the administration of former U.S. President Barack Obama and has wildly accelerated under the current officeholder, Donald Trump, the United States could be counted on to play a strategic role in Southeast Asian affairs. But without a U.S. vision for the region—and a commitment remotely matching China’s—these countries are losing, or have already lost, their ability to balance one great power off of the other. That gives China a wide-open field.

Hiebert wisely resists suggesting how the United States could respond to China’s shadow across Southeast Asia. Trump has certainly abandoned any pretense at deep engagement, or any vision. The U.S. military is the voice of much of the official relations in the region. As the antagonism between China and the United States reaches a new intensity, the region has only gained in strategic importance—for both Washington and Beijing. Hiebert’s book, therefore, should be required reading for anyone trying to make sense of the fast-moving changes in Southeast Asia.

Elizabeth Becker is the author of Overbooked: The Exploding Business of Travel and Tourism and a former international economic correspondent at the New York Times.

Pompeo Draws a Line Against Beijing in the South China Sea

The United States has aligned itself on the side of international law, but backing up a tough statement will be hard.

Under Cover of Pandemic, China Steps Up Brinkmanship in South China Sea

Beijing has increased pressure on its nervous neighbors in its quest to dominate the entire South China Sea.