Yet Another Opposition Leader Targeted in Belarus

Maria Kolesnikova is a former musician who rose to prominence in recent protests.

Maria Kolesnikova sits with former Minister of Culture Pavel Latushko (left) and Coordinating Council member Maksim Znak (right) on their way to a protest in Minsk, Belarus, on Aug. 23.

MINSK, Belarus—The disappearance of Maria Kolesnikova in Minsk seems to have robbed the anti-government protest movement in Belarus of one of its most prominent figures—even as her precise whereabouts remain unknown.

According to two fellow activists, unidentified men took Kolesnikova off the city streets early on Monday and whisked her to the Ukrainian border, in what appeared to be an attempt to expel her. 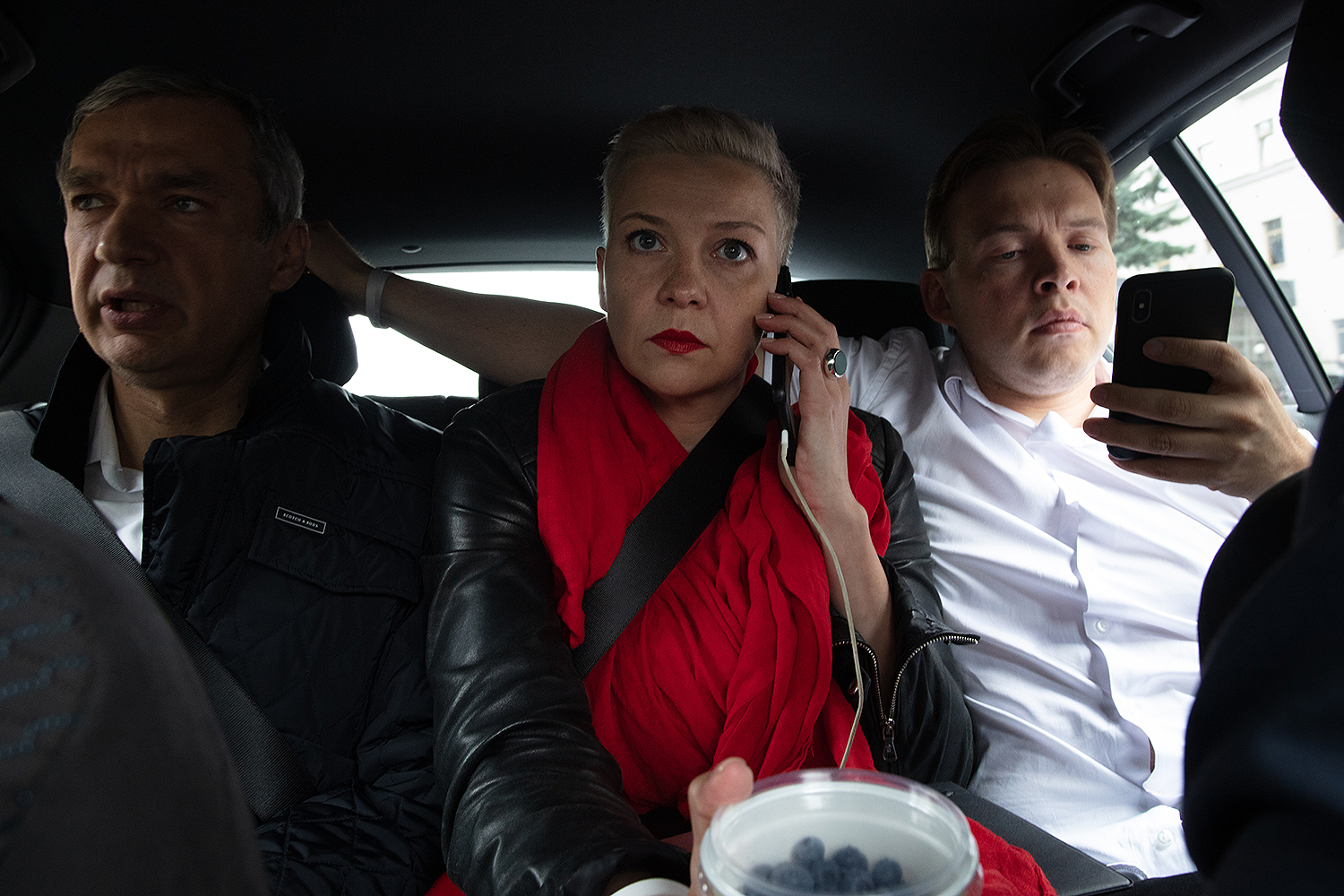 Maria Kolesnikova sits with former Minister of Culture Pavel Latushko (left) and Coordinating Council member Maksim Znak (right) on their way to a protest in Minsk, Belarus, on Aug. 23.

MINSK, Belarus—The disappearance of Maria Kolesnikova in Minsk seems to have robbed the anti-government protest movement in Belarus of one of its most prominent figures—even as her precise whereabouts remain unknown.

According to two fellow activists, unidentified men took Kolesnikova off the city streets early on Monday and whisked her to the Ukrainian border, in what appeared to be an attempt to expel her.

The two activists, who were also taken to the border, said they saw Kolesnikova rip up her passport and clamber out of a car window in a desperate attempt to avoid being thrown out of the country. The activists, who spoke to reporters in Kiev, said she remained at the border and was detained by Belarussian officials. Nobody has heard from Kolesnikova since Monday, though the Belarusian government confirmed on Wednesday that she had been brought back to Minsk, where she is currently in detention.

Authorities in Belarus have for months been arresting or deporting members of the opposition movement, which is trying to oust President Alexander Lukashenko after 26 years of repressive rule. 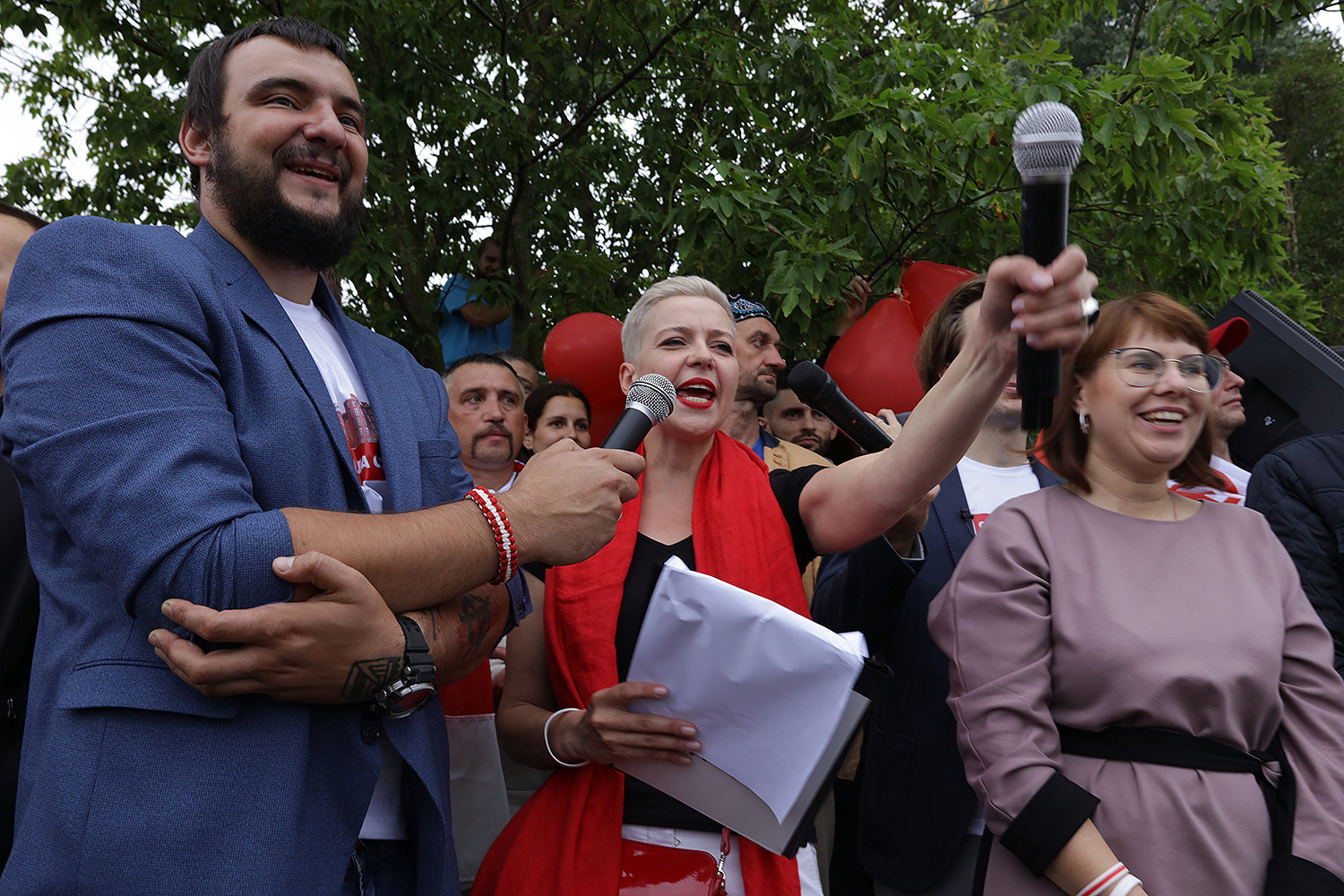 Kolesnikova gives a passionate speech during a protest that brought hundreds of thousands to the streets of Minsk on Aug. 23 to denounce President Alexander Lukashenko. 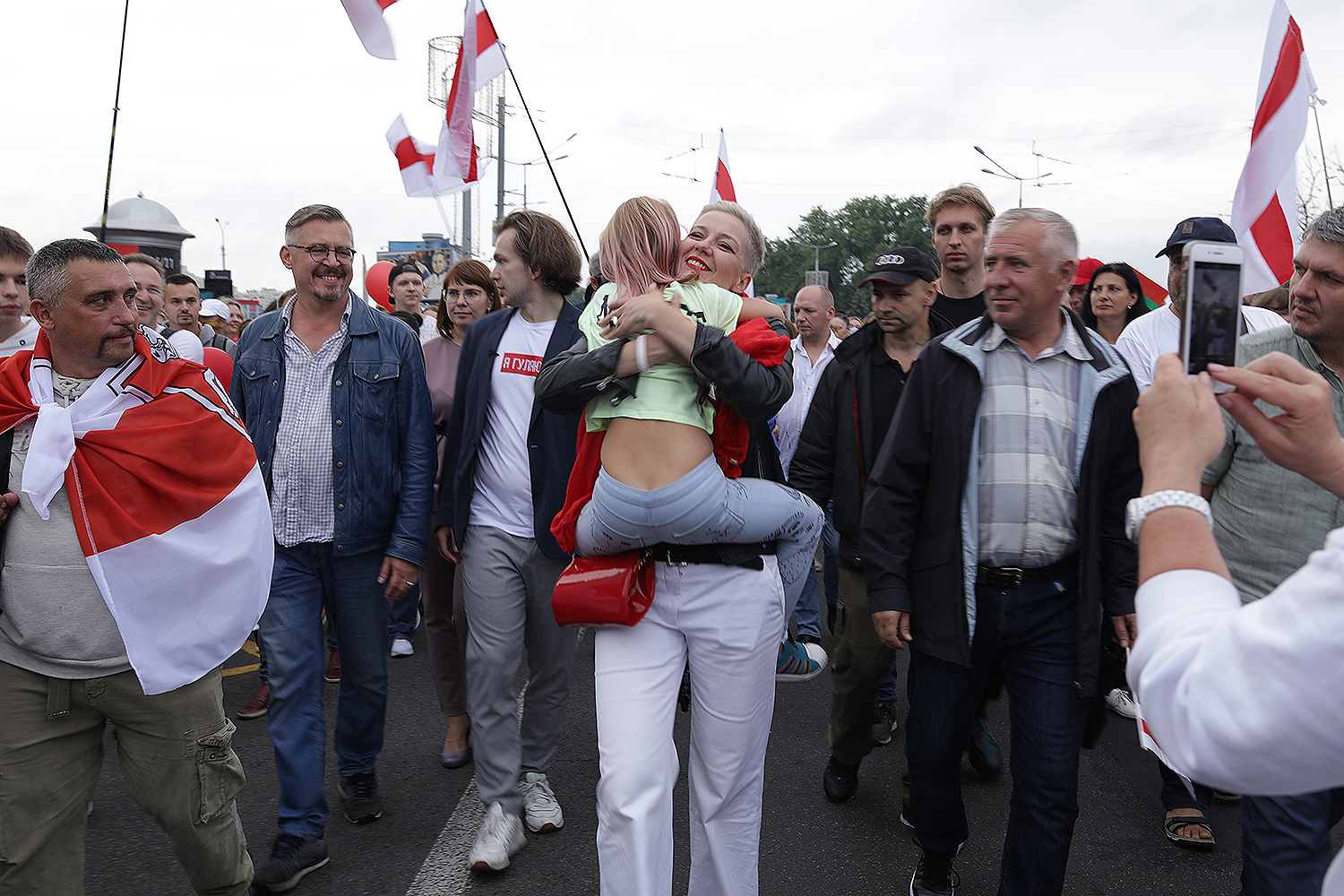 As Kolesnikova leads a crowd of thousands through Minsk on Aug. 23, a young girl jumps into her arms.

Kolesnikova is one of three prominent women leading the broadest protest movement in Belarus’s recent history. In a country known for its political repression, she is an unlikely leader. A classically trained musician, Kolesnikova spent much of the last decade in Stuttgart, Germany, performing at and running a cultural center. She rose to prominence earlier this year as the campaign manager for Viktor Babryka, a former banker who intended to challenge Lukashenko in the Aug. 9 election.

But authorities imprisoned Babryka on charges of illegal financial dealings—in a move broadly believed to be politically motivated. A second candidate, Sergei Tikhanovsky, was also jailed, and a third fled the country, leaving the opposition in disarray. In response, Kolesnikova and a woman from each of the other two parties formed a pact—setting aside political differences and vowing together to end Lukashenko’s 26-year rule. One of those women was Svetlana Tikhanovskaya,  wife of Sergei and the presidential candidate widely believed to be the real winner of the election on August 9. But while Tikhanovskaya and the third women in the troika, Veronika Tsepkalo, have since fled Belarus, Kolesnikova has stayed behind, living across the road from the headquarters of the country’s state security apparatus known as the KGB—where her former boss is being held. 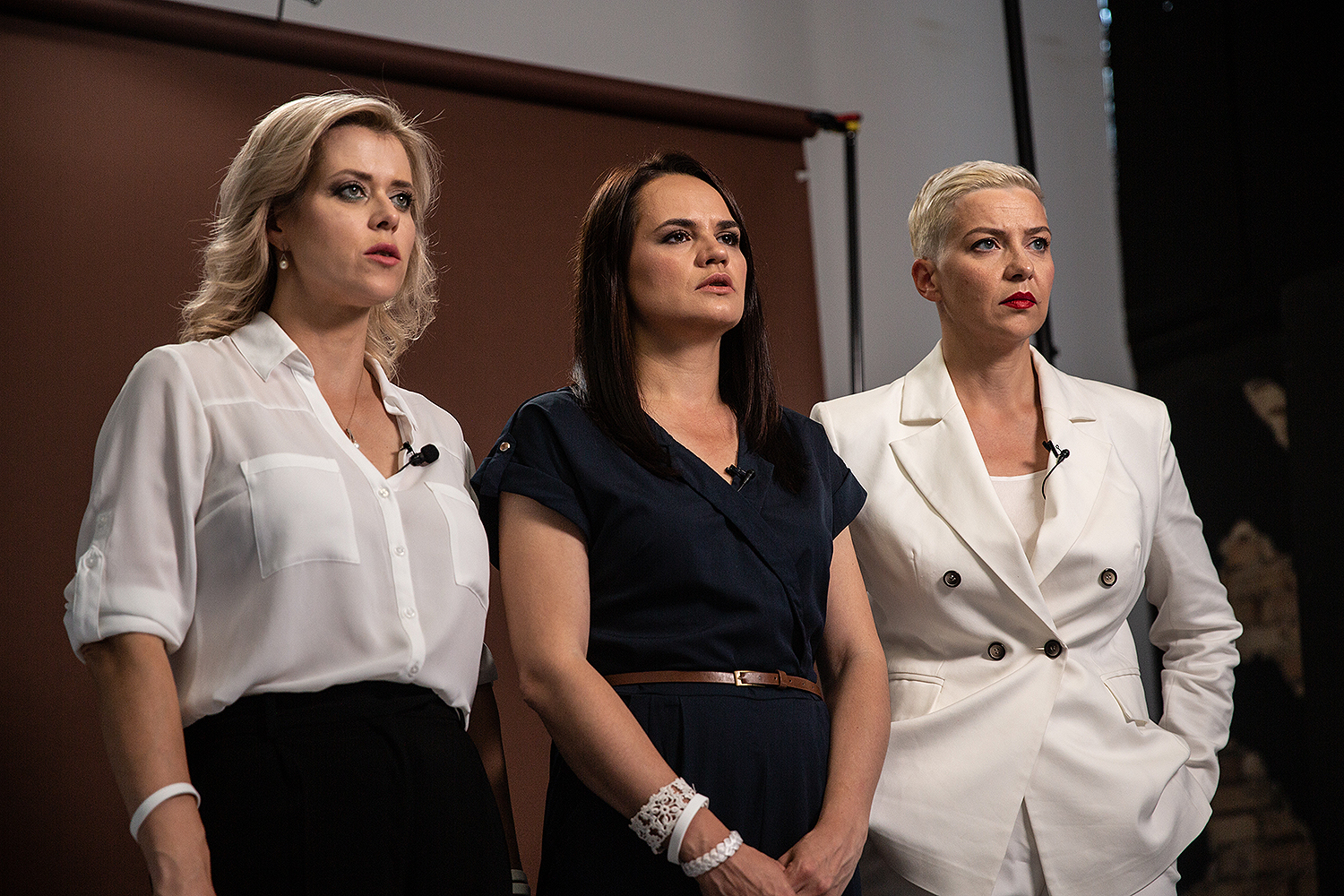 From left, Veronika Tsepkalo, Svetlana Tikhanovskaya, and Kolesnikova attend a PR shoot in Minsk on Aug. 6 in the lead-up to the Belarus presidential election. 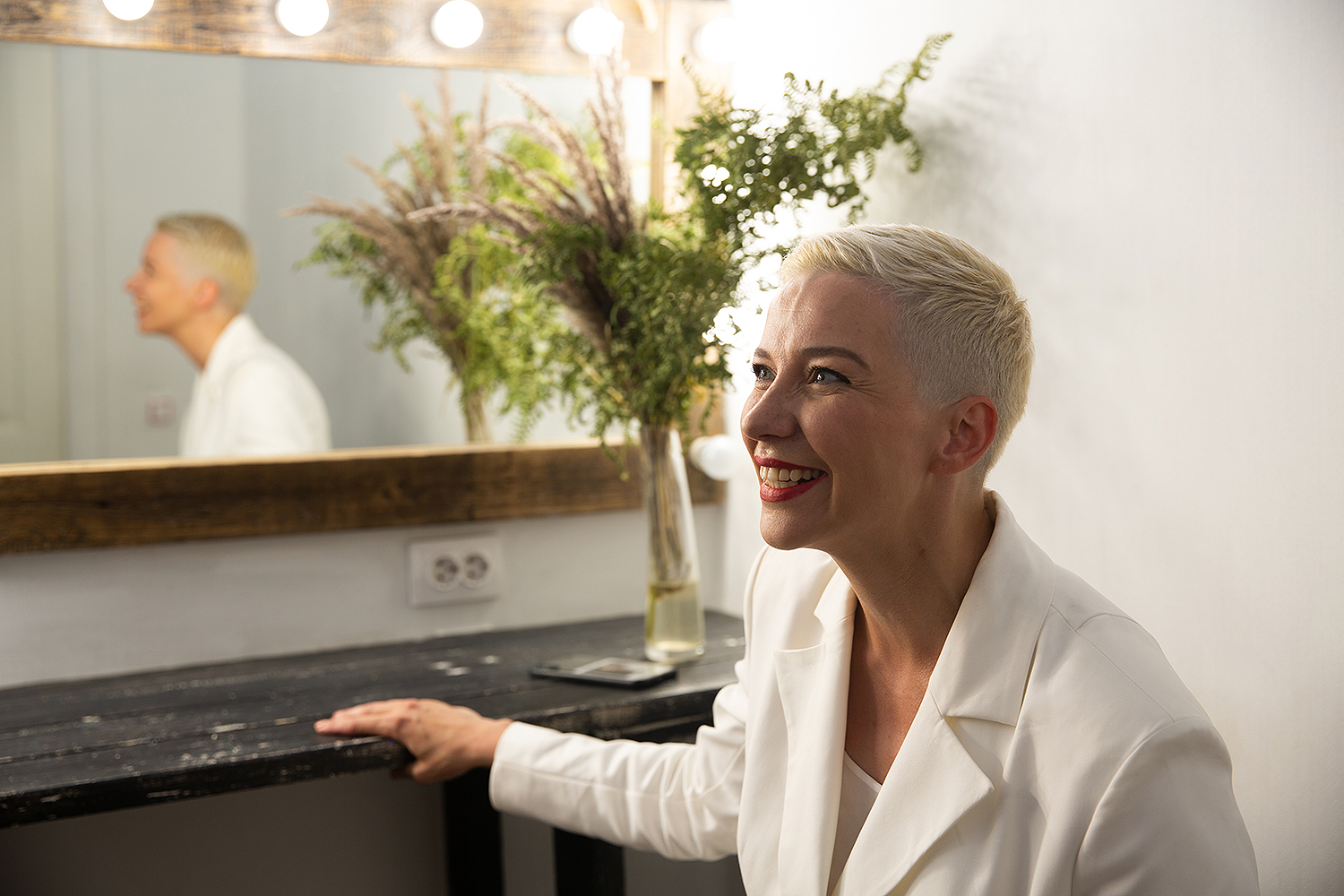 Kolesnikova is pictured at the photoshoot.

The setbacks to the movement, including brutal crackdowns and the exile of several of its leaders, was widely expected to precipitate its collapse. Instead, the opposition to Lukashenko has become more organized and more resilient in recent weeks and months. Since the election, the movement has formed a “coordination council” to facilitate the transfer of power once Lukashenko is ousted. It features some prominent figures, including the former culture minister, Pavel Latushko, and the Nobel Prize-winning Belarusian author Svetlana Alexievich.

But it is Kolesnikova, also a council member, who has emerged as the face of the recent protests. In the past weeks, she has visited striking factory workers, recorded and shared video statements on the messenger app Telegram, and given interviews to news outlets from around the world. When pro-Lukashenko demonstrators tried to shout her down at a recent rally in the industrial town of Zhodino, Kolesnikova struck a conciliatory tone. “We will forgive you; we will have a dialogue with you,” she shouted back.

Kolesnikova’s press secretary Gleb German told Foreign Policy that Tikhanovskaya had come to rely heavily on Kolesnikova during the election campaign. “Svetlana had a lot to say but didn’t know how to say it—that’s where Maria was important.” 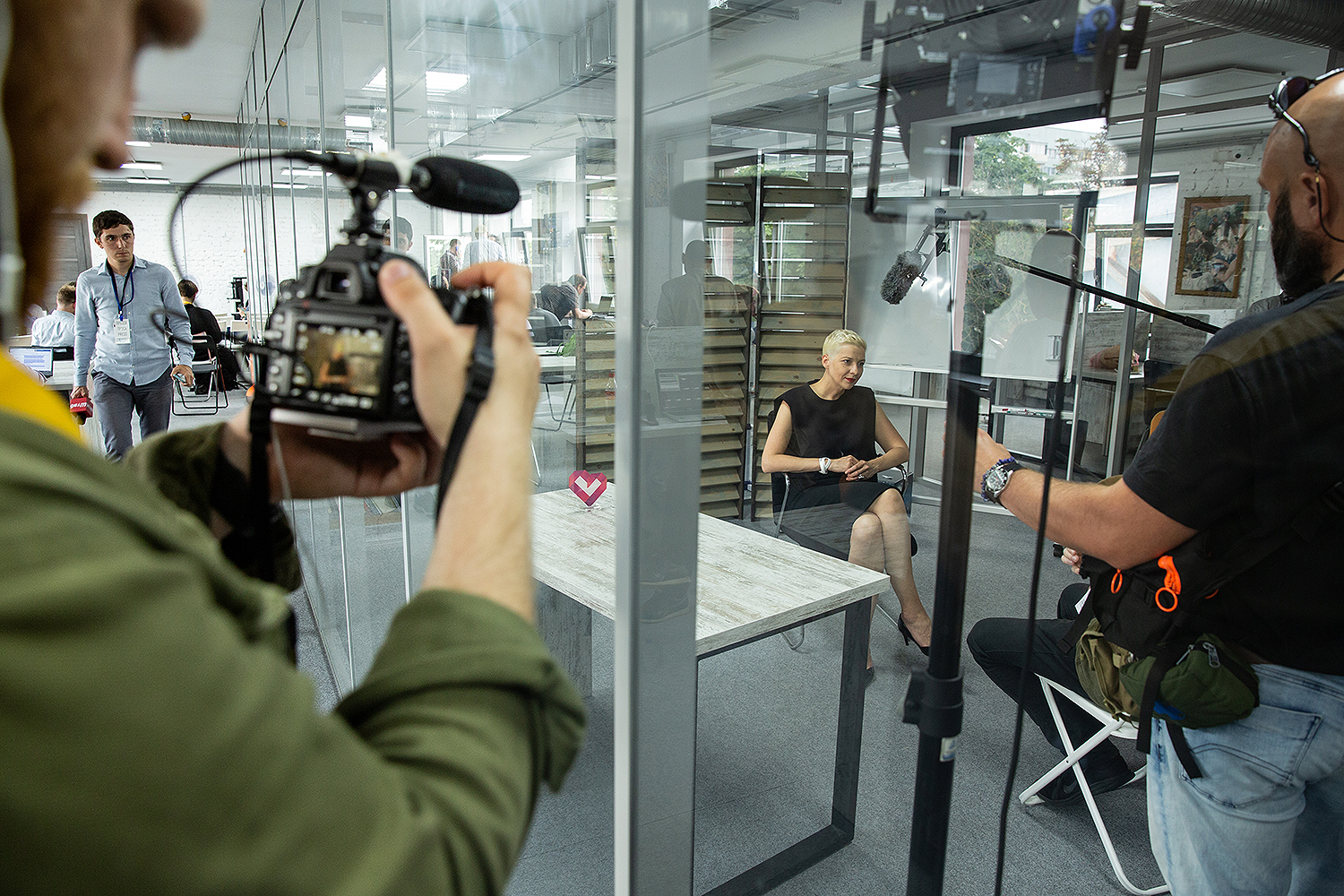 Kolesnikova is interviewed by the press at presidential candidate Viktor Babryka’s campaign headquarters in Minsk on Aug. 9, a day after being detained by police for what officials later called a case of mistaken identity.

The political role is new to her. But people close to Kolesnikova say Belarus’s cultural sphere has been the main incubator for the country’s new political ideas in recent years—given how tightly controlled politics has been. And friends say Kolesnikova’s activism went hand-in-hand with her musical career. As a student at the Belarusian State Academy of Music, she often clashed with the dean over her unwillingness to participate in pro-government events. In 2000 and 2006, she took part in anti-government protests.

“In Belarus, contemporary art now is very closely related to politics,” said Ivan Kravtsov, a musician and one of the two aides expelled to Ukraine this week. “It’s a vital component of society, where ideas are generated, debated, and amplified. It’s analogous to what politicians try to do.”

Lukashenko’s supporters have cast Kolesnikova as an out-of-touch cosmopolitan who can’t possibly understand the struggles of Belarus’s rural working class. Lukashenko, in contrast, is billed as the protector of Belarus’s agricultural and industrial heartland. But in the factories on the edge of Minsk, once a stronghold for Lukashenko, even workers who draw government salaries have joined the protests. 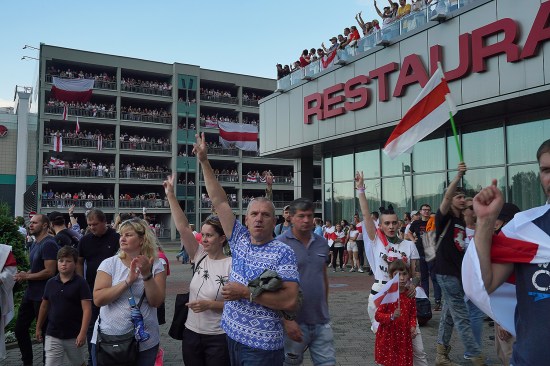 A multistory carpark is filled with people waving flags and cheering as protesters flood the streets of Minsk in a march toward Independence Palace, the site of Lukashenko’s working residency, on Aug. 30.

Lukashenko was heckled by factory workers at a speech on August 17 and called on to resign. In another incident, he confronted a man filming his speech with a thinly veiled threat. “If somebody provokes something here, we will sort it out in a hard way,” Lukashenko said.

Some pro-Lukashenko figures have attempted to cast the recent unrest in Belarus as Ukraine 2.0—a tug of war between Russia and the European Union or NATO. But while protesters have occasionally called on Russian President Vladimir Putin to refrain from interfering, Kolesnikova has seemed reluctant to provoke Russia.

“I think she understands all kinds of complex connections we have in the regional situation,” Kravtsov said.

Russia accounts for more than 41 percent of Belarus’s exports, and until recently the open border between the countries meant that people could drive from Minsk to Moscow without showing their passports. During the demonstrations, both Russian and EU flags are often seen waving alongside the red-and-white national flag. 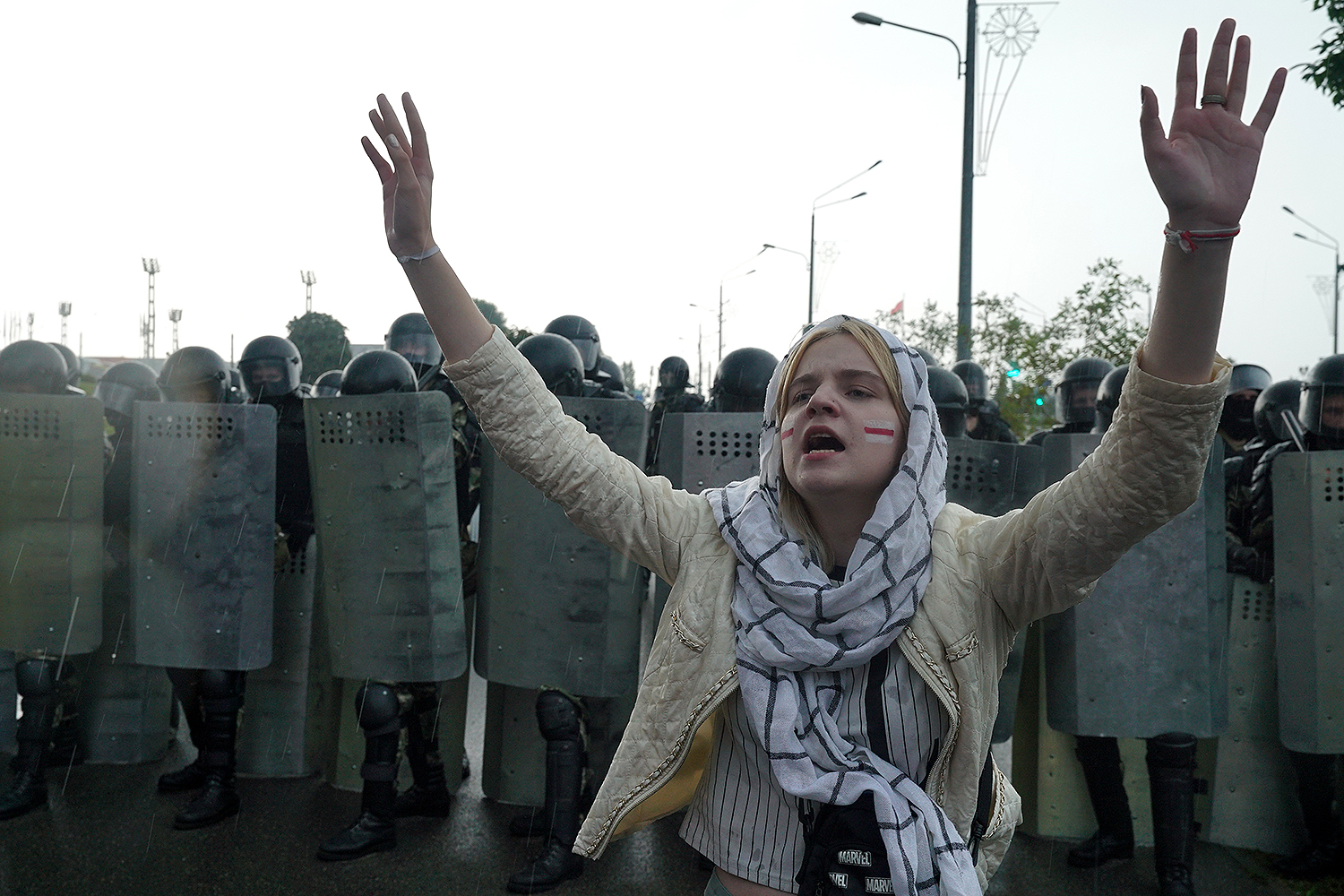 A woman gives a speech to protesters as riot police block Independence Palace in Minsk on Aug. 30. 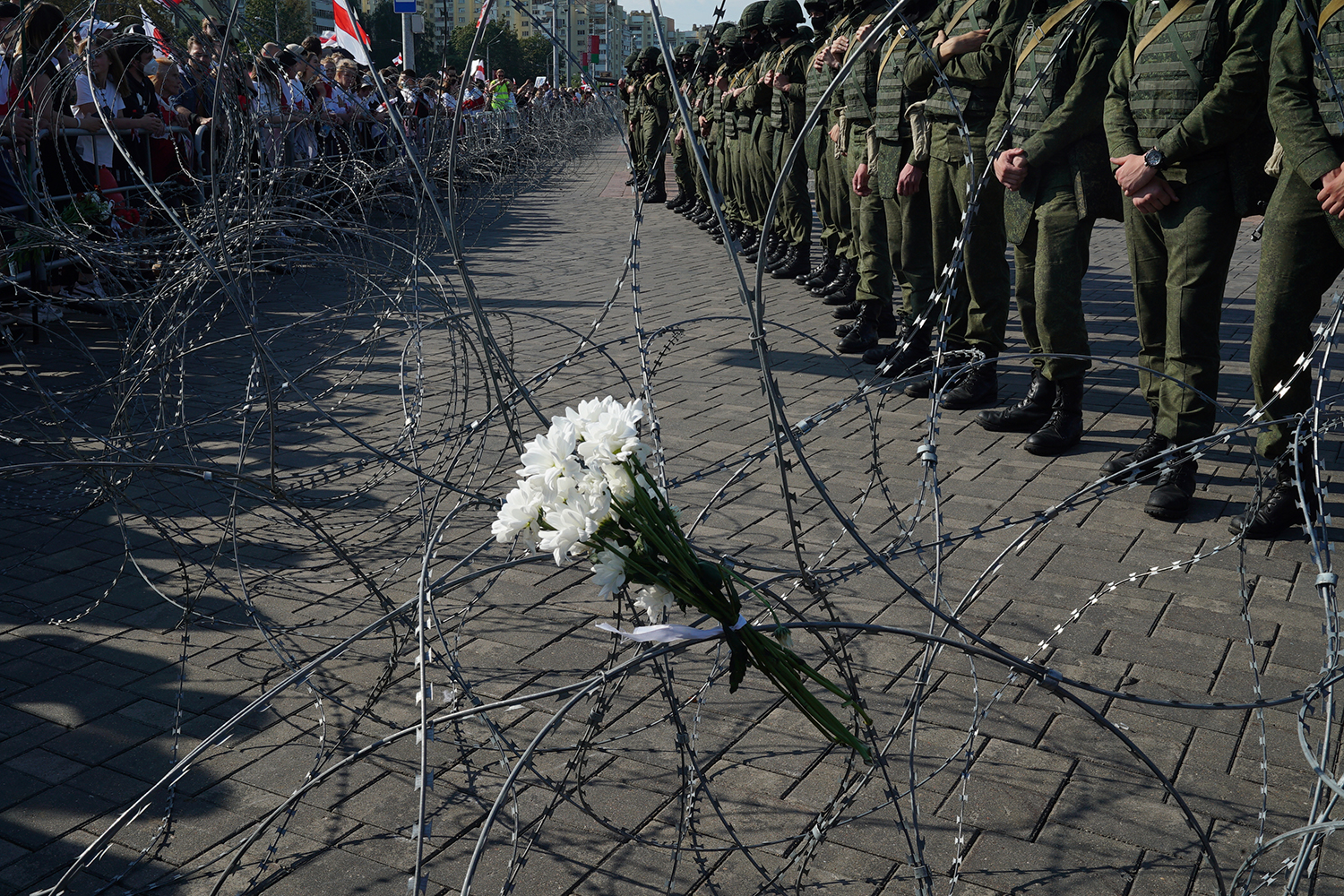 Flowers—a symbol of peace featured throughout the protest movement—are placed in the barbed wire separating the military from demonstrators in Minsk on Aug. 23. 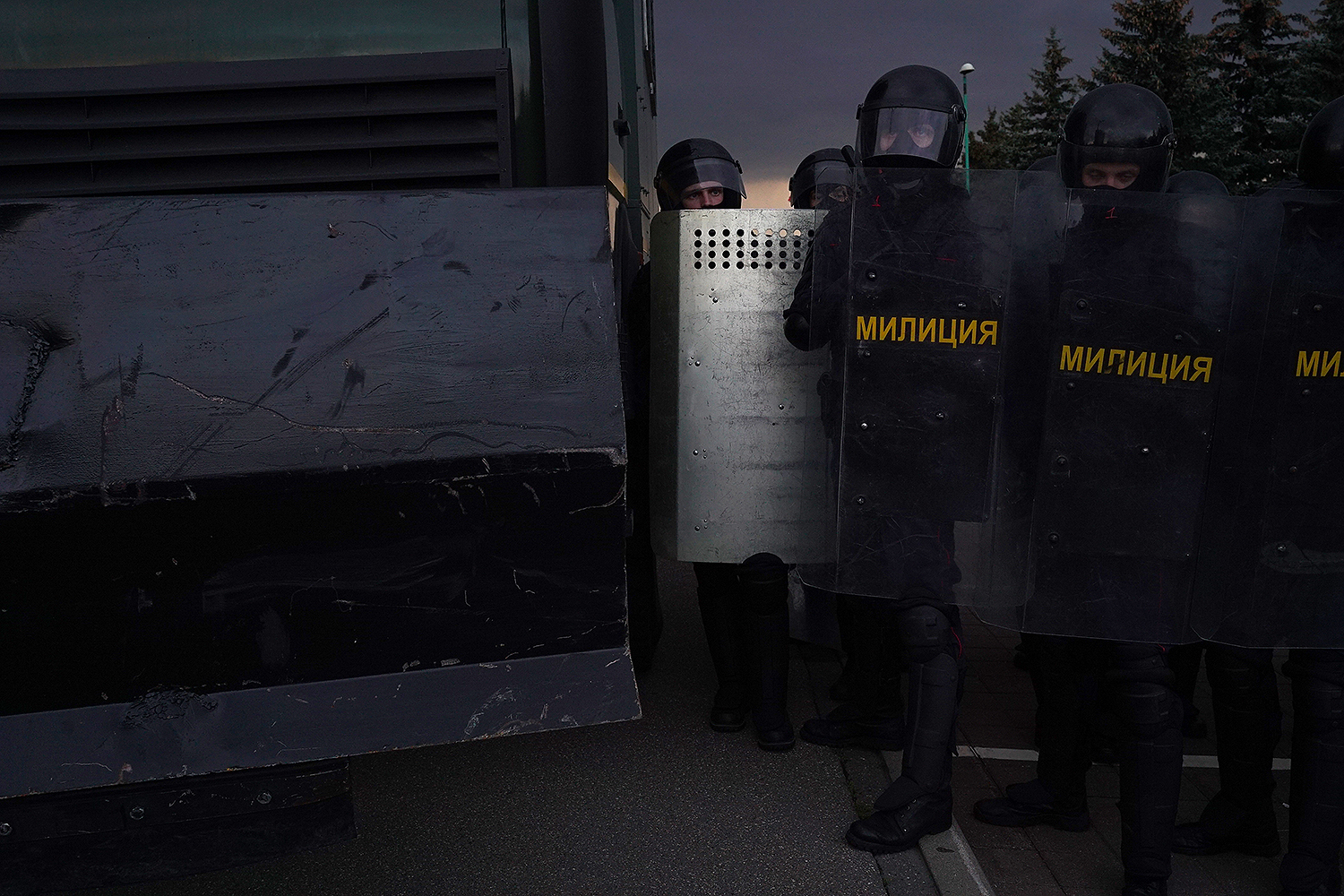 Riot police watch over protesters in Minsk on Aug. 30.

For now, Putin appears to be supporting Lukashenko. In a recent interview, he said he was willing to deploy reserve forces to Belarus should “extremist elements” cross the line.

As far as Lukashenko is concerned, Kolesnikova may have already done that. Until her disappearance, Kolesnikova had appeared in public regularly and vowed not to leave the country. She has neither children nor a partner in Belarus—making her harder to intimidate.

“We are stressed, yes—the threat of arrest is very stressful,” Kravtsov said before disappearance. “But honestly, is she afraid? I don’t think so.”

Time Is Running Out in Belarus

Putin is signaling he wants a clear resolution—but he may not mind which side wins.

The Woman Who Started a Revolution in Minsk

As protests swell across the country, Belarusians are calling for the return of the unlikely politician Svetlana Tikhanovskaya.

If Lukashenko Falls, Is Putin Next?

Russian autocracy is different, but Belarus should still be a cautionary tale.

Gareth Browne is a British journalist based in Lyon, France. A graduate of the University of Exeter, he has reported extensively from Iraq, Syria, and Yemen. Twitter: @brownegareth