MOMAND DARA, Afghanistan—Arman Omari grew up among guns, drugs, and airstrikes, with control of his village changing hands several times throughout his teenage years and with women largely absent from public life. He learned to shoot before learning to write his name.

Sitting in an unfinished building in Momand Dara district in the eastern province of Nangarhar, not far from the village in Achin district where he grew up, Omari, 25, explained that he didn’t see a future for his family the way Afghanistan is currently run. The gap between relatively well-off urban areas and rural areas like his—bereft of clinics, schools, or jobs—has only grown after nearly two decades of fitful efforts at governance from leaders in Kabul.

That’s why last month he made a fateful decision—like so many others, especially from rural Afghanistan. “I joined the Taliban because the government is corrupt,” said Omari, a slender man with greasy, shoulder-length hair, a trimmed beard, and kohl-rimmed eyes.

“There are two overriding laws—one for the rich and one for the poor. People like me have no opportunities, and I’m hoping this will change with an Islamic system in place,” Omari said. “The government has failed us, so my hope is with the Taliban. If they come to power, I want to be on their side.”

As Taliban militants and the Afghan government meet for a first round of direct negotiations in Qatar, aiming to work out a final peace deal and perhaps a power-sharing arrangement that could see the Taliban return to power, the Islamist group is gaining momentum and recruits—especially in rural areas like Omari’s. Almost 20 years after U.S. and international troops first went into Afghanistan to root out the Taliban and vanquish al Qaeda, the Taliban are now stronger than ever, controlling dozens of Afghan districts, according to a report by the Council on Foreign Relations.

For many rural (and less well-educated) Afghans, Taliban indoctrination finds a receptive audience, greased by the fact that the Taliban use family, friends, and community connections to recruit new members. Decades-old promises of a better life under the national government have failed to materialize: Omari’s family is part of the 90 percent of Afghanistan that lives below the national poverty line of $2 per day, according to the Afghan Ministry of Economy. Three-quarters of Afghans live in rural areas, where even basic services are in short supply; the Ministry of Education this month revealed that 7,000 schools across the country don’t actually have buildings—including in Omari’s native Achin district.

While many Afghans fear that a Taliban return to power will bring the excesses of the 1990s—a harsh, austere interpretation of Islam that imposed strict rules, summary justice, and the disappearance of women from public life—for many poor, desperate, rural Afghans who’ve seen little good come out of Kabul, the attitude is often: Why not give the Taliban a try? 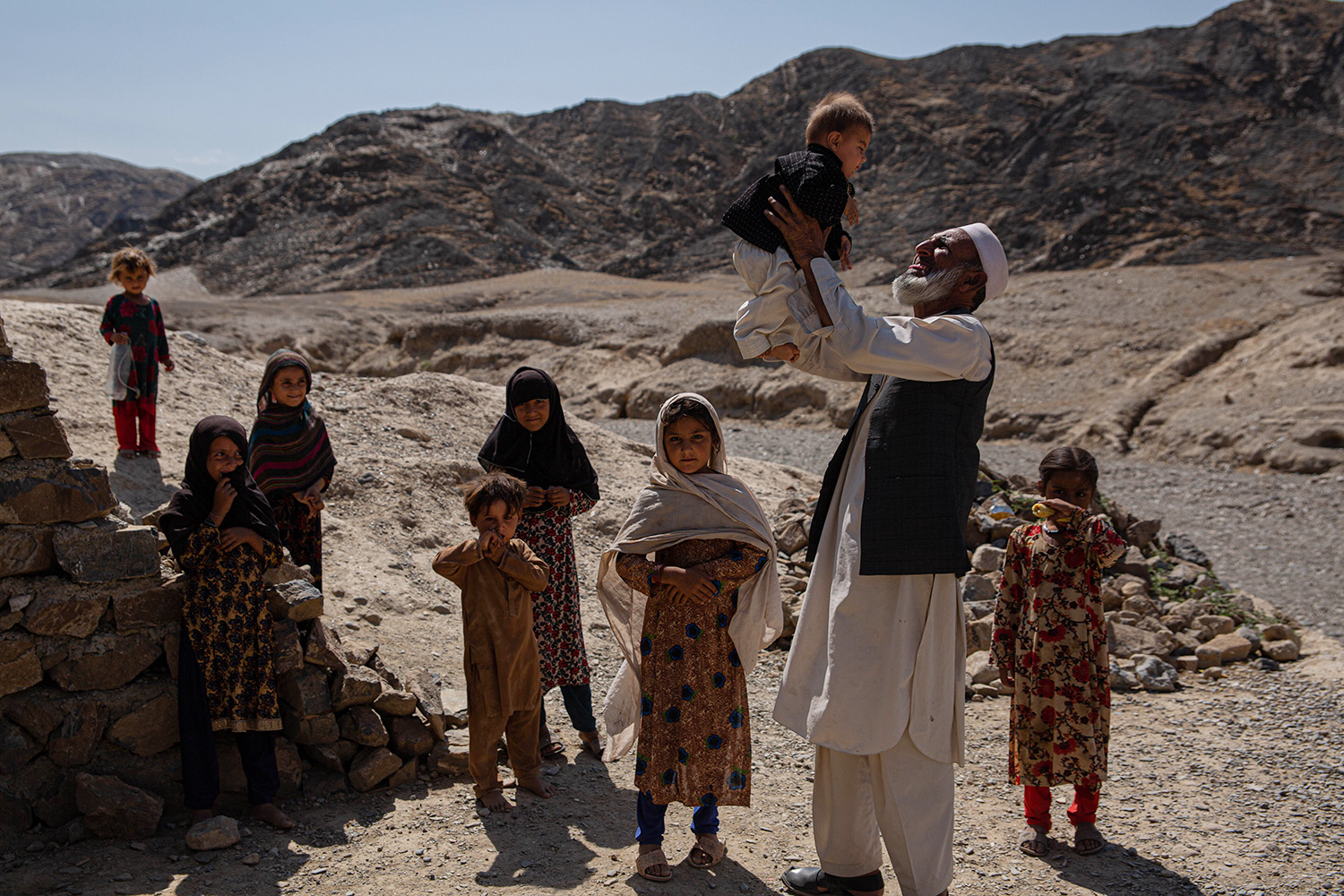 Villagers in Nangarhar’s Momand Dara district on Sept. 19. The rural-urban divide in Afghanistan has caused widespread frustration, with people in rural areas saying they lack access to services such as education and health care. Stefanie Glinski for Foreign Policy

Omari’s hometown of Pekha is in Achin district, not far from where we met. In some ways, the district, an area of rocky peaks and open fields just north of the border with Pakistan, is a microcosm of recent Afghan history. After the 2001 U.S.-led invasion, the ruling Taliban were defeated. But they came back eight years later, only to be driven out in turn by the arrival in 2015 of an even harsher Islamist militant group, the Islamic State. In 2017, the United States dropped the “mother of all bombs” here, aiming to destroy an Islamic State tunnel system. Today, Achin still lies in rubble but is back to quasi-governmental control—and still home to many Taliban sympathizers.

Growing up with six siblings in a simple mud brick house, Omari never attended school; he learned both how to shoot and how to write his name from older friends. Instead, he took care of the family’s cannabis fields. After long days out in the hot sun tending to the plants, he spent his teenage evenings playing cricket and volleyball, only returning home long after the sun had set.

The majority of the final product from the family’s fields—hashish, or chars in Pashto—was packed onto the backs of donkeys and smuggled across the Pakistani border by relatives. Even smuggling, for Omari, underscored the difference between the Taliban and a government in Kabul seen as irretrievably corrupt.

“We pay taxes to the Taliban, especially when it comes to smuggling chars across the border,” he said. “The difference is that the Taliban aren’t corrupt. They take taxes, but they are not stealing from us.”

Married at 21 and now the father of a 3-year-old boy, Omari admitted that he hoped for a better life for his children. He didn’t know if his wife was in favor of the Taliban—a conversation the young couple never had—but assumed she would follow his lead.

“It was only war for me—we didn’t even have a school. At night I’d hear airstrikes. I remember the Americans, the Taliban, Daesh,” Omari said, using the Arabic acronym for the Islamic State. “My father gave me a gun to defend myself when I was a boy. Today, I want to fight for a better life for my own family. I want my children to go to school, not to carry guns. Maybe as a Talib, this will be possible.”

Most, but not all, of the Taliban’s recruits come from rural backgrounds like Omari’s, said Andrew Watkins, the International Crisis Group’s senior Afghanistan analyst. “In large part, recruitment seems to stem from family and tight community connections.” Different motivations spur them all.

“Individual motivations are extremely diverse and range from revenge against the government or foreign occupiers for killed relatives or comrades to limited alternative opportunities in some regions to recruiting pressure from the organization,” Watkins said.

The Taliban are not only recruiting the rural poor and desperate. In Omari’s native Nangarhar province, recruitment at university campuses has even been successful. In May, a retired Afghan general in the country’s western Farah province defected to the Taliban—as have army soldiers over the past years.

In Afghanistan, Social Media Is the Only Way to Talk Back to the Taliban

As the United States abandons demands for human rights, young Afghans are embracing free speech the only place they can—on the Internet.

A new confidential report concludes that a majority of fighters are resuming their “jihad” to overthrow the U.S.-backed Afghan government.

“People of various backgrounds join the Islamic Emirate’s ranks, including youths and the offspring of the mujahideen, as well as those leaving the ranks of the Kabul administration [the term the militants use for the Afghan government, which they don’t recognize],” Taliban spokesperson Mohammad Naim said.

With peace talks getting underway, and the eventual prospect of some sort of power-sharing arrangement that could grant the Taliban a say in how parts of the country are run, there is a looming split between those yearning for better rule—and those who want a hard-line resistance.

A Kabul-based security analyst, who spoke under the condition of anonymity, said that as many as 10 percent of Taliban hard-liners could defect to groups such as the Islamic State if the Afghan government and the Taliban effectively merged.

For other Taliban fighters, such a merger would be welcome.

Sayed Biltun, a 21-year-old Taliban fighter recently released from a two-year prison sentence as part of a larger prisoner release on the government’s side ahead of the Doha talks, is hoping the merger might just work. He is part of the post-Taliban generation who flocked back to the militants’ ideology. He said little would change for the worse in his village in Nangarhar’s Bati Kot district if the Taliban came back to power fully.

“Rural life is far removed from the city,” Biltun said. “All we’re hoping for is better services and more equality when it comes to service distribution.”

For Omari, the decision last month to join the Taliban was less about joining an insurgency and more about desperately searching for a future with some sort of peace after four decades of war—even if a resurgent and increasingly aggressive Taliban right now is one of the biggest obstacles to progress in the peace talks. Asked if he would leave the country if he had the chance, Omari took a deep breath and then nodded.

“Of course I’d choose Europe—or even America—over this. We’re desperate. At the same time, I’d do anything to see this war end, to help my country. I’d work in the fields to grow food. I’d rebuild houses. Whatever it takes to bring us peace.”

In Afghanistan, Social Media Is the Only Way to Talk Back to the Taliban

As the United States abandons demands for human rights, young Afghans are embracing free speech the only place they can—on the Internet.

A new confidential report concludes that a majority of fighters are resuming their “jihad” to overthrow the U.S.-backed Afghan government.