What Happens When Presidents Get Sick?

Just when the U.S. public needs clarity about Trump’s health, tradition and the president’s proclivities make that unlikely.

We have all been living with the uncertainties of the coronavirus for nearly eight months. Now the twin COVID-19 diagnoses of President Donald Trump and first lady Melania Trump have propelled the United States—which was already suffering from political bewilderment—into a fraught new reality. This reality has two dimensions. In human terms, the United States has entered uncharted waters. Presidential couples have gotten sick before: In the early 1990s, for example, both President George H.W. Bush and Barbara Bush struggled with Graves’ disease, an autoimmune disorder, at the same time—though the disease was treatable and both went on to live very long lives. President Ronald Reagan and Nancy Reagan also both got sick, with cancer, during their White House years—but these health scares did not occur at the same time. Never before has a first couple been simultaneously threatened as seriously as today.

Despite White House chief of staff Mark Meadows’s statement Friday that Trump was experiencing mild COVID-19 symptoms, and the president’s transfer later in the day to the Walter Reed National Military Medical Center, in all likelihood no one—not even Trump—will know the severity of his illness for some time. Besides the emotional toll this uncertainty will exact, Trump’s diagnosis raises a whole set of other, thorny questions about leadership and how to ensure the continuity of government. If that didn’t make the moment alarming enough, all this is also happening in the last month of a bitterly contested presidential election campaign.

If the past is a guide, the complete truth about the president’s health—once it becomes clear to insiders—will remain a closely held secret. Most modern White Houses have been excessively parsimonious about sharing information regarding the health of the chief executive. The absolute nadir of transparency occurred the last time the world suffered a catastrophic pandemic. In April 1919, White House doctors covered up President Woodrow Wilson’s bout with the flu—even when his fever spiked to 103 degrees for four days—as well as the mild stroke he suffered later that month and the massive stroke that debilitated him that October. Hiding behind a cloak of lies and relying on a phalanx of enabling associates, first lady Edith Wilson went on to run the country from the shadows for the remaining 17 months of the president’s term. 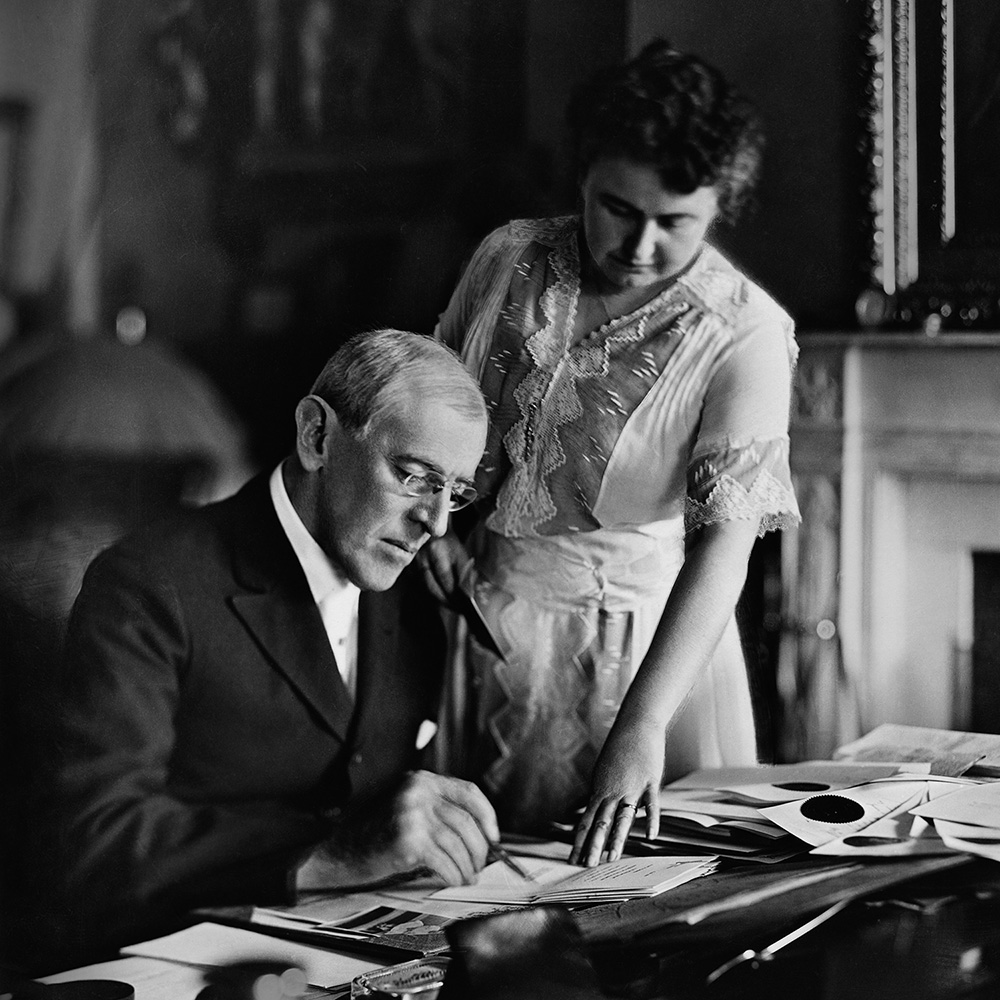 U.S. President Woodrow Wilson goes over papers at his desk with his wife, Edith Wilson in the mid-910s. Edith was sometimes referred to as the “secret president” because of the role she played in Wilson’s presidency during his debilitating illness following a stroke. Stock Montage/Getty Images

Wilson’s case, while extreme, wasn’t that exceptional. In March 1944, seven months before that year’s election, President Franklin D. Roosevelt’s doctors concluded that he was suffering from “acute congestive heart failure” and began giving him a barbiturate sedative to reduce his stress. Yet they never told him or the country the full extent of his disability, allowing him to seek and win an unprecedented fourth term. None of that ultimately helped FDR, however; he died in office just three months after his inauguration.

Things improved somewhat under President Dwight Eisenhower when he suffered a serious heart attack and a small bowel obstruction in his first term and a minor stroke in his second. Unlike Roosevelt’s, Eisenhower’s doctors didn’t cover up the severity of his heart attack (though they downplayed the stroke). But this transparency didn’t last into the administration of President John F. Kennedy, whose doctors never shared the extent of his chronic Addison’s disease—an adrenal deficiency that can lead to life-threatening crises under stress—or disclosed the cocktail of steroids, and, likely, amphetamines, that he took as a remedy.

Starting with the dawn of the nuclear age, in 1947 the U.S. government began creating protocols to ensure the continuity of government in the event of a catastrophic nuclear attack. But the potential for dishonesty about the health of the commander in chief remained a glaring problem. The mishandling of Eisenhower’s illnesses and Kennedy’s assassination led to the adoption of the 25th Amendment to the U.S. Constitution in February 1967; in addition to clarifying the constitutional provision that, on the death of the president, the vice president would become president (and not just an acting chief executive), the measure laid out, for the first time, the method by which an ailing president could voluntarily transfer power to the vice president. To deal with the possibility that the president and his doctors might not be honest about the nature of his disability or illness, the amendment also outlined a complex system for an involuntary transfer of power. If the vice president and a majority of cabinet members inform Congress in writing that the president is no longer able to discharge his duties, the amendment specifies that the vice president becomes acting president. If, however, the president is well enough to express his disagreement with his cabinet’s judgment, the matter then goes to Congress, which must decide it by a two-thirds vote.

When the Coronavirus Reaches the Top

Trump is far from the first world leader to face the political implications of his own positive COVID-19 test. What happens next?

So far, the 25th Amendment’s voluntary system has been used three times. In 1985, when he was operated on to remove a malignant tumor on his colon, Reagan transferred power to his vice president, George H.W. Bush. In 2002 and 2007, his son, President George W. Bush, briefly transferred power to Vice President Dick Cheney when he underwent colonoscopies. The involuntary system, however, has never been tested.

Not since 1944 has the United States faced the realistic possibility that the president could become incapacitated during an election. Although voting has already begun, Republican Party regulations would permit the party to replace Trump as their candidate in the event of death or serious incapacity. It is likely, though not automatic, that the party’s choice would be Vice President Mike Pence. Should the president’s illness worsen after Nov. 3, then the 20th Amendment provides some as yet untested guidance on what should happen next. Were Trump to win but die before the inauguration, Vice President-elect Pence would become president. Were Trump to amass a majority of votes in November but die before members of the Electoral College voted in December, then the Republican Party would have to try to encourage electors pledged to Trump to vote for Pence or to give the choice to Congress. Were Trump to die after the Electoral College vote but before Congress counts the vote and formally declares the winner on Jan. 6, then Pence would become acting president on Jan. 20, a position he’d hold until Congress chose a new president. Were the president-elect to merely become incapacitated, neither the 20th nor the 25th Amendment provides any guidance for what would happen next.

To help reduce this massive uncertainty, Americans deserve daily updates on Trump’s health. The president may not welcome the idea of sharing information that does not seem to promise a quick and full recovery, but any attempt to spin the truth now will only increase the likelihood that good news about the president’s recovery won’t be believed later.

Presidential illnesses always put vice presidents in an awkward position, but the election has complicated that too. The desire to show that the top of the ticket is robust has historically blocked any demonstrations of leadership from the bottom of the ticket. But the country can ill afford such reticence now. Millions of Americans are sick or recovering from COVID-19. The country desperately needs steady leadership. Allies and adversaries also require clear signals that the business of the U.S. government will continue regardless of the health of the president.

The best solution, of course, would be for Trump and the first lady to get better quickly. Any other outcome will only deepen the mistrust, anger, and trepidation many Americans already feel about the November election and the future of the country. If, however, the president’s illness lingers and becomes debilitating, then he will need to acknowledge, for the first time since 2016, that he cannot govern alone and voluntarily relinquish power—if only temporarily—to Pence. No presidential candidate, let alone a sitting president seeking reelection, has ever faced such a dilemma before. We can only hope that Trump proves up to the challenge.

When the Coronavirus Reaches the Top

Trump is far from the first world leader to face the political implications of his own positive COVID-19 test. What happens next?