Why the Quad Is the One Alliance Trump Cares About

The United States may shun multilateralism, but it is successfully uniting Australia, India, and Japan against China.

Welcome to Foreign Policy’s South Asia Brief, back in business after a short break.

Welcome to Foreign Policy’s South Asia Brief, back in business after a short break.

Why Pompeo Kept His Meeting With the Quad

Despite the turmoil at the White House after the U.S. president and several top aides tested positive for the coronavirus, Secretary of State Mike Pompeo made time this week to travel to Tokyo to meet his three counterparts from the so-called Quad, the rebranded security dialogue between Australia, India, Japan, and the United States.

At the start of the meeting on Tuesday, Pompeo called on the group to collaborate against what he called Beijing’s “exploitation, coercion, and corruption.” Indian External Affairs Minister S. Jaishankar was more diplomatic in underscoring the group’s differences with China, saying the Quad is composed of “vibrant and pluralistic democracies with shared values.”

Australia’s Marise Payne and Japan’s Toshimitsu Motegi made similar points, outlining visions for a peaceful and inclusive Indo-Pacific, but without specifically naming China.

Why now? The exact nature and vision of the Quad remains confusing. Started in 2007 as the Quadrilateral Initiative and championed by Japan’s then-Prime Minister Shinzo Abe, the group has often failed to generate real consensus or momentum. It is unclear whether Abe’s recent successor, Yoshihide Suga, shares his foreign-policy vision. Australia was for a period keen to strengthen ties with China. And India, particularly before Prime Minister Narendra Modi came to power in 2014, still appeared tethered to its historic policy of no-alignment.

But in 2020, Canberra and especially New Delhi have revised their approaches toward Beijing. Australia has moved to actively combat Chinese foreign influence, while India’s foreign-policy and defense apparatus has focused on its deadly border conflict with China. Joining a more explicitly anti-China alliance may seem appealing, mostly as a way of making Beijing’s individual problems appear bigger when combined.

What does Washington really want? One of the few tangible foreign-policy philosophies of the Trump administration is movement away from multilateralism and alliances. But the White House seems to make an exception for the Quad. This may be because the Quad today is defined less by what it stands for and more by what it opposes: China. The Trump administration has identified China as its primary adversary and therefore its top foreign-policy issue. After Trump was hospitalized last week, Pompeo canceled other parts of his Asia visit but kept Tokyo on his agenda.

The question is how Washington might approach the Quad in 2021, especially under a new potential administration. In the vice presidential debate on Wednesday, both Vice President Mike Pence and Sen. Kamala Harris sidestepped direct questions on how they would define America’s fundamental relationship with China. (Most Chinese couldn’t have tuned in even if they wanted to: CNN, for example, was blacked out in the country every time the debate mentioned China.)

One clue about the potential Biden administration’s China policy may come from the past. Kurt Campbell, the senior diplomat in the Obama administration who was responsible for the so-called pivot to Asia and now a senior advisor to the Biden campaign, recently told the Wall Street Journal that “there is a broad recognition in the Democratic Party that Trump was largely accurate in diagnosing China’s predatory practices.”

Canberra, New Delhi, and Tokyo will likely see those words as a hint that whoever wins the U.S. election on Nov. 3, the Quad’s latest iteration may be here to stay for a while.

Coronavirus update. India’s tally of confirmed coronavirus cases is on track to exceed 7 million this weekend, bringing it closer to overtaking the United States as the country with the most cases. In reality, India likely surpassed the United States a while ago. Most experts believe the true number of cases in India is significantly higher. Bangladesh and Pakistan remain the second and third most affected countries in South Asia, but their recorded numbers are very low in comparison to India.

Our weekly chart below lays out the country-by-country numbers over the last four weeks.

Ramanan Laxminarayan, an economist and epidemiologist who has studied COVID-19 closely, told me this week the large disparity in numbers between India and its neighbors is likely down to widely different rates of testing.

Meanwhile in Nepal, three advisors to the prime minister tested positive on Saturday. (Last week, Foreign Policy pulled together a list of world leaders have contracted COVID-19 so far.)

Pakistan’s military strikes back. Pakistani police have filed sedition charges against former Prime Minister Nawaz Sharif after his party joined forces with other opposition parties to accuse the country’s powerful military of rigging the 2018 election that brought Imran Khan to power. The charges extend to Sharif’s daughter and dozens of party leaders. Sharif is currently based in London. Pakistan’s opposition parties have joined forces to form the Pakistan Democratic Movement, an alliance seeking to remove Khan from power and reduce the military’s influence.

Moving money in Male. A Maldives court has sentenced former Vice President Ahmed Adeeb to 20 years in prison on corruption charges. Adeeb pleaded guilty for crimes that included leasing tropical islands for hotel development well below market prices. He was fined nearly $130,000, but his actions reportedly cost the government more than $250 million.

Amnesty closes its India operations. Last month, Amnesty International decided to shut down its operations in India after New Delhi froze its bank assets. This isn’t the first time the human rights watchdog has faced pressure from India. Nor is Amnesty the only high-profile group targeted by New Delhi. Others include the Ford Foundation, which was put on a national security watch list in 2015.

As FP’s Sumit Ganguly points out, “there’s little hope that Modi’s human rights record will improve. That’s especially true given that the Indian judiciary, long known for its independence, is increasingly submissive to Modi, too.”

India rape case. India has attracted global outrage after police in the Hathras district of Uttar Pradesh cremated the body of a 19-year-old Dalit woman without the permission of her family. The woman died from her injuries shortly after reporting to the police that she had been gang-raped. The entire chain of events is deeply disturbing and touches on several current flash points in India: caste dynamics, rampant sexual assault, lax policing, and medieval attitudes among the police force.

Read more in the BBC—especially this report by Geeta Pandey, who traveled to Hathras to piece together what happened at the end of September.

Worst-ever recession. A new report released by the World Bank this week projects that South Asia is set to plunge into its worst-ever recession as a result of the coronavirus pandemic. Regional growth is expected to contract by 7.7 percent in 2020, private consumption will decline by more than 10 percent, and informal workers will be hit hardest.

App store wars. Google has delayed the enforcement of a 30 percent fee on in-app payments through its Play Store after facing backlash in India. Google may also have felt pressure after reports of a move by New Delhi to launch a domestic alternative to Google’s Play Store and Apple’s App Store. Google’s move is surprising given its complete dominance of the domestic market: The vast majority of Indian smartphone users have Android devices. 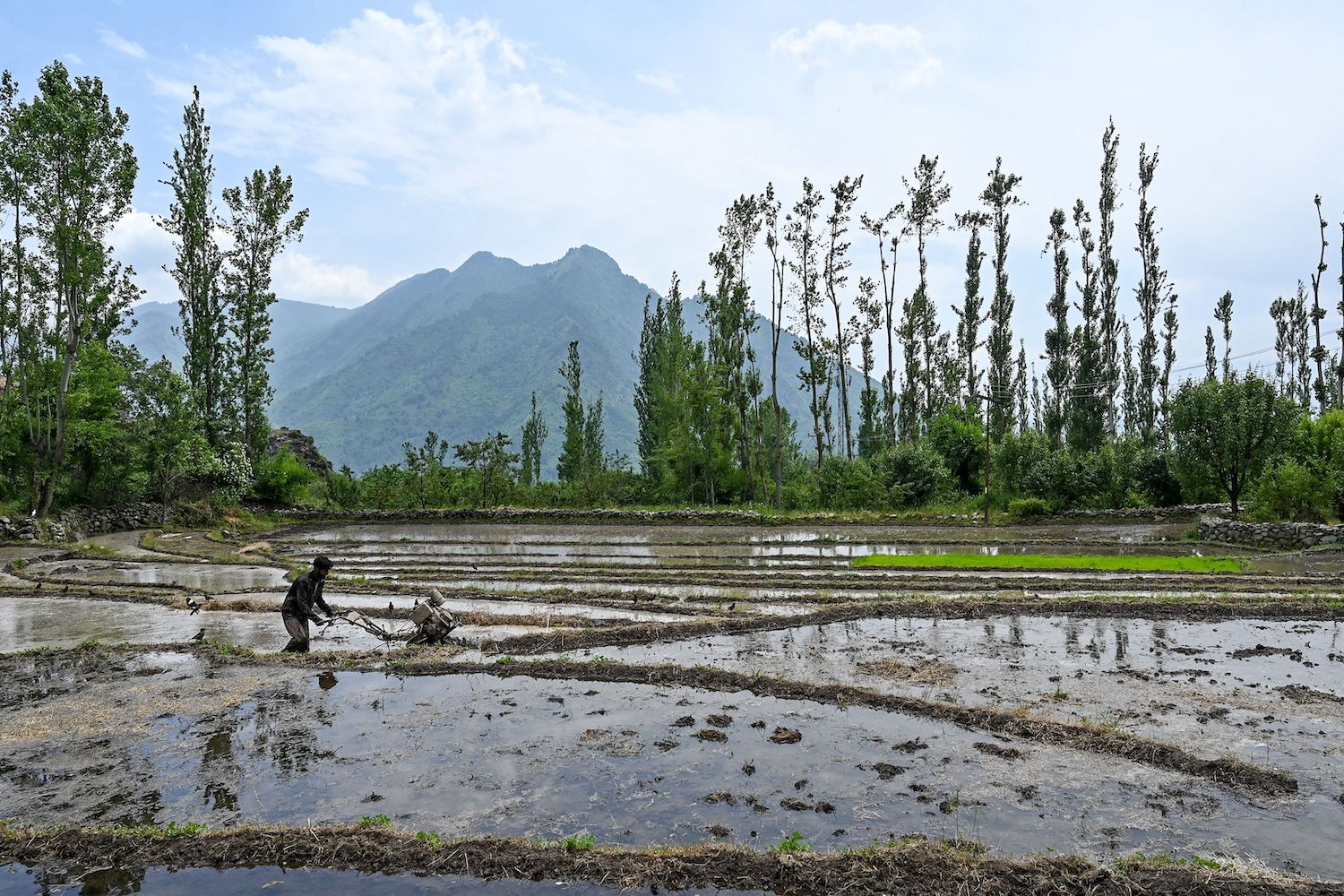 A farmer works in a rice field on the outskirts of Srinagar, Indian-administered Kashmir, on June 11.TAUSEEF MUSTAFA/AFP via Getty Image

Rice fight. As if India and Pakistan didn’t have enough to disagree on, the latest issue of contention is now basmati rice. Last month, India applied for permission to geographically label basmati rice—a move that would enhance basmati’s reputation, as similar moves have done for champagne and Darjeeling tea.

But now Pakistan says it will give a “befitting reply” to India, since it also produces varieties of basmati rice. According to Arab News, Pakistan exported $2.17 billion worth of rice last year, of which more than 36 percent came from sales of basmati rice. India’s move would almost certainly harm Pakistan’s ability to export basmati.

NEW FOR SUBSCRIBERS: Want to read more on this topic or region? Click + to receive email alerts when new stories are published on Security, China, India, South Asia, Australia, Japan