Ten months in, it’s not too soon to write a first rough draft of how COVID-19 became the worst pandemic in a century and what it might mean for the world of the future. And the pundit extraordinaire Fareed Zakaria is the obvious candidate to take this task on.

Ten months in, it’s not too soon to write a first rough draft of how COVID-19 became the worst pandemic in a century and what it might mean for the world of the future. And the pundit extraordinaire Fareed Zakaria is the obvious candidate to take this task on.

In his new book Ten Lessons for a Post-Pandemic World, Zakaria—who in 2017 warned on his CNN show that the biggest threat to the world’s lone superpower was now a tiny virus that “the United States is wholly unprepared to deal with”—addresses the deeper causes of the pandemic, how it will change the world and how it won’t, and how we’d better get ready for the next one soon. 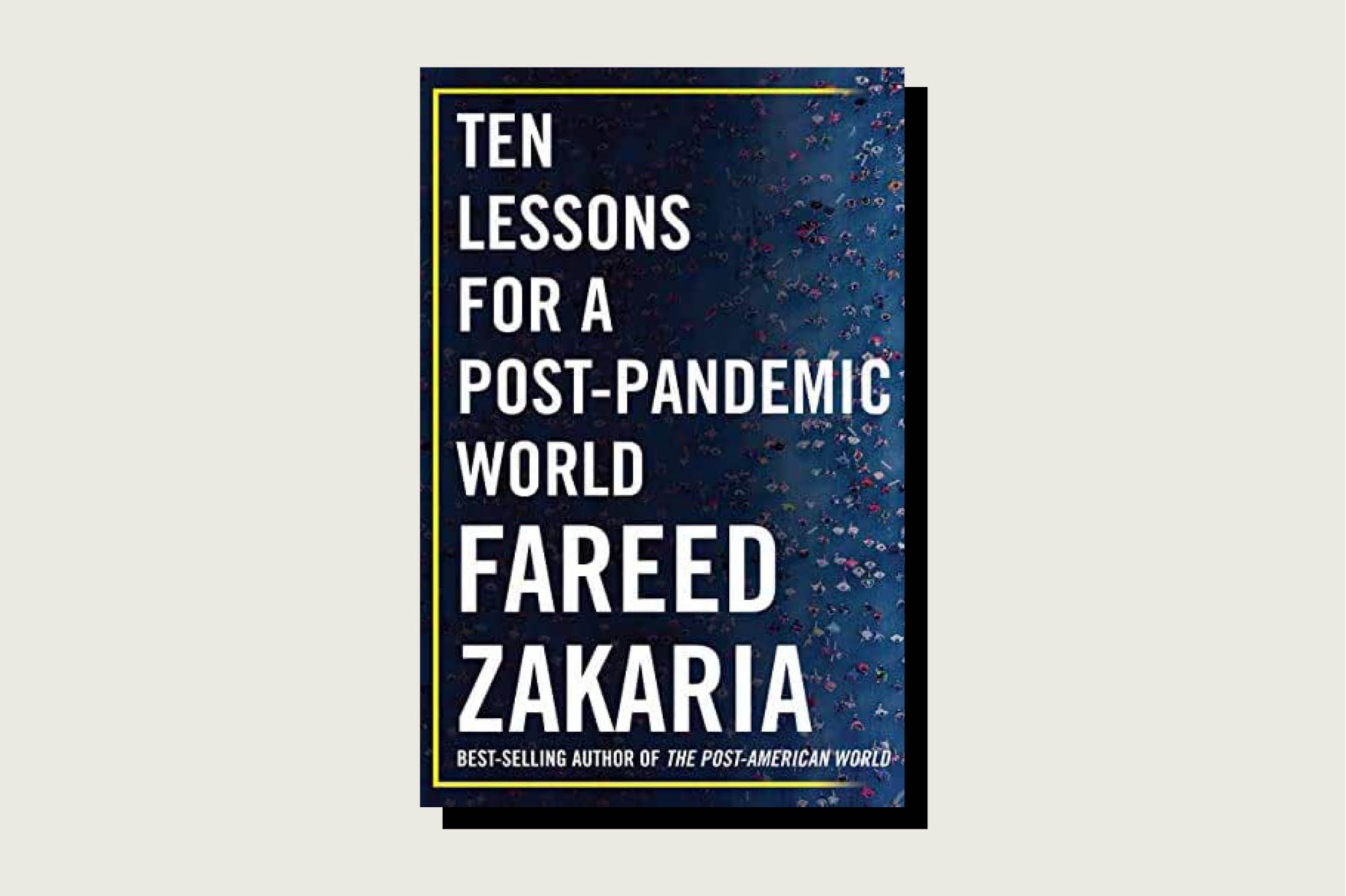 Because let’s not kid ourselves: The next one is coming. “Buckle up,” Zakaria writes in succinct, clear prose in his 242-page book. Displaying an impressive mastery of history, economics, long-past health crises, and global cultural trends, Zakaria observes: “We have created a world that is always in overdrive,” with people living longer and inhabiting larger spaces, encroaching on and destroying the natural world. In response, the pandemics to come will be “nature’s revenge,” he says. This is true not least in the once remote habitats of virulent bats, which we have learned are ideal carriers for deadly viruses because they can survive them better than other animals. But the ever spreading human population is coming in contact more often with bats as well, raising the danger of future unknown viral contact.

In the United States, it’s too easy to simply blame President Donald Trump and his now well-documented dilatoriness in responding to the first signs of COVID-19. The problem is longer term and systemwide: Years of medical health dominance have led to complacency at the Centers for Disease Control and Prevention and other major health centers, Zakaria writes. What also needs to change—and already is—is a new appreciation that Reaganite market solutions are insufficient and that government needs to play a new, if as-yet-undetermined role. Zakaria repudiates the new socialism of the Bernie Sanders-Alexandria Ocasio-Cortez ilk by reorienting the antiquated debate between free markets and command economies. Instead, he calls for a focus on “quality” more than “quantity” of government—but in broad terms an acknowledgement that government is necessary. In the post-COVID-19 world, Denmark, for example, a leading mixed economy that has had unusual success against the virus, is no longer simply dismissed as a socialist demon by the American right. (Even the Fox News commentator Tucker Carlson, Zakaria notes, has recently said: “Republican leaders will have to acknowledge that market capitalism is not a religion. … You’d have to be a fool to worship it. Our system was created by human beings for the benefit of human beings.” Sanders, Zakaria observes wryly, “could not have said it better.”)

But Zakaria also provides some useful perspective about what isn’t going to change. Amid the mass exodus from cities, he quotes Aristotle’s dictum that humans are fundamentally “social animals.” Cities are not going to disappear simply because of pandemic panic. “All past prophecies of the decay of cities have proved wrong,” he writes, and they will again. “Urbanization, especially in developing countries, will likely recover and continue at more or less its pre-pandemic rate. No rural awakening is at hand.” Instead what is likely to ensue is cities that are better prepared, like Hong Kong, which has suffered at last recording, in October, only 105 deaths.

Zakaria cites Paris Mayor Anne Hidalgo’s plan for turning that great, iconic city into a “ville du quart d’ heure”—a so-called 15-minute city designed in such a way that stores, parks, schools, doctor’s offices, and other essential common spaces are easily accessible within a few minutes by biking or walking, rather than via virus superspreaders like mass transit.  A new concept of zoning that would repudiate a “hundred years of urban planning orthodoxy,” in the words of Samuel Kling, an urban expert at the Chicago Council on Global Affairs, and throw out the old divisions between residential and commercial districts could go a long way toward achieving this.

Hidalgo has already begun to implement her plan by turning the famous highways along the Seine into walking and biking paths, but Zakaria suggests that the United States is already taking the lead in this endeavor, with many cities putting in restrictive zoning that lowers population density.

The new culture of Zoom meetings from home is no substitute for the reinvention of cities, Zakaria argues, because “it is becoming increasingly clear that remote work is a fantastic tool but an imperfect substitute for actual human contact. To be sure, colleagues with established relationships can continue working together smoothly by chatting online. Yet bringing on new coworkers, and establishing trust and teamwork with them, is extremely hard to do on video. Not to mention that remote work leaves out all the spontaneous water-cooler conversations and accidental meetings that ultimately create greater productivity and innovation from the collision of minds. When you teleconference, you are spending social capital rather than building it.” He only touches on one of the most enervating aspects of the global lockdown: the sheer pathological loneliness of it, which just goes to show that Aristotle was right.

This leads Zakaria to another important if counterintuitive conclusion: Globalization isn’t dying, despite the widespread call for “reshoring” industries and what appears to now be a bipartisan call in the midst of the U.S. presidential election for America to at least partially “decouple” from China. True, U.S. industries are moving plants from China—but rather than returning them to U.S. shores, they are sending them to Southeast Asia. Despite the fact that “[n]ations are becoming more parochial,” comparative advantage will continue to shape the outlines of our world. Globalization is not only not going to disappear, Zakaria says; its long history dictates that it will and must continue.

“Human beings don’t want to stand still,” he writes. “Movement has been the way of the world for tens of thousands of years. If we think of globalization as the increasing movement of people, goods and capital, it has been at work ever since the first humans began migrating out of Africa sometime between 60,000 and 90,000 years ago—most likely as increasing droughts and famines (and perhaps disease) forced them to search for new pastures.”

Occasionally, in his rush through history from Aristotle and Plato to the post-pandemic era, Zakaria’s message feels a little facile and unsatisfying, as when he proposes a solution to the anti-elitist populism that rules the day by writing, “We will need more experts, not fewer, to manage the affairs of these times. … The alternative is unthinkable in the modern age: government by gut and the celebration of ignorance.” Yet Zakaria offers no real practical solution to the problem of advanced nations, including the United States, that still appear hopelessly polarized by a mass rejection of so-called expertise and by “government by gut,” to the point where the wearing of masks to protect against COVID-19 has turned into a political and cultural flash point.

Even the emerging new bipolar world between the United States and China can be managed, Zakaria says, if we don’t allow ourselves to get carried by immoderate calls for a new cold war. “Looking at the shape of international politics in the future, it’s clear—bipolarity is inevitable. A Cold War is a choice.”

In the end, while I think Zakaria’s diagnosis is mostly correct, his prognosis feels a little optimistic, considering we are still smack in the middle of this pandemic and the global system, to date, has failed to come together to combat it. Although Zakaria offers up a few savvy proposals—like his idea of creating a strategic medical reserve “akin to the strategic petroleum reserve”—others are sometimes disappointingly vague. Our giant corporations appear to be hard at work at a vaccine, but internet rumor has overtaken real science as to when one will be ready, and our lobby-proof food conglomerates continue to promote an obesity epidemic that has only made the depredations of COVID-19 worse. Zakaria says all that is needed to prepare for the next pandemic is the “political will”—including shoring up the much-maligned World Health Organization (WHO) and addressing the post-pandemic problem of worsening inequality that he predicts ominously “will cut America in half.” But he does not really tell us how such political will is to be achieved amid the chaos of country finger-pointing and Trump’s defunding of WHO, a system so broken that political philosopher Francis Fukuyama says America has now become a “vetocracy.” Globalization was under justified attack long before COVID-19 came along, in large part because the very so-called experts that Zakaria calls on to save us made cavalier choices that in short order devastated the middle classes of the United States and some other leading countries. Trump did not come out of nowhere.

Yes, Zakaria is right to say that, after a late start, most nations moved impressively and with widespread public consent to contain a virus that could have killed tens of millions of people but to date has left only a little more than a million dead. Humanity has demonstrated, once again, that it is capable of making the right choices. Survival is always a choice.

In his final chapter, Zakaria, typically a hardheaded realist, indulges in a bit of romance. He quotes the famous line from the movie Lawrence of Arabia, when Peter O’Toole defies death by bringing back a dying Arab comrade from the desert whom his colleagues had written off as lost. “Nothing is written,” the hero says. What Zakaria leaves out is the line by the Arab leader played by Anthony Quinn, who after the saved man is executed (by O’Toole himself) later remarks: “Ah, it was written then.”

True, fate may play a large hand in this wrenching human drama, but Zakaria is right to say we can’t simply resign ourselves to it. And he has performed an invaluable service in starting a necessary conversation about how we, as a species, can make better choices to save ourselves from predictable calamities to come.