Demonstrations against police brutality—organized on social media and powered by artists and musicians—have shown Nigeria’s youth that they have the power to change society.

For once in Nigeria, the youth have united against tribe, religion, and ethnicity to demand change.

For years, the Nigerian police unit known as the Special Anti-Robbery Squad (SARS)—designed for tactical undercover operations to take down criminals—has extorted, harassed, and killed young people who happen to use expensive phones and drive flashy cars. The plainclothes police also target those who sport dreadlocks and tattoos.

Despite the online campaign against SARS through the #EndSARS hashtag for four years, the government’s indifference and lip service inspired SARS to commit more atrocities against citizens. But a viral video that circulated on social media on Oct. 3—a gory display of a man allegedly killed in broad daylight by a SARS squad—was the last straw.

Young Nigerians had had enough. So they took action, first by trending the hashtag #EndSARS, which hit No. 1 worldwide on Twitter. Next, they deployed a decentralized and organic strategy to drive youth from social media to the streets of Nigeria’s major cities—especially Lagos, Nigeria’s commercial hub—to demand an end to SARS. 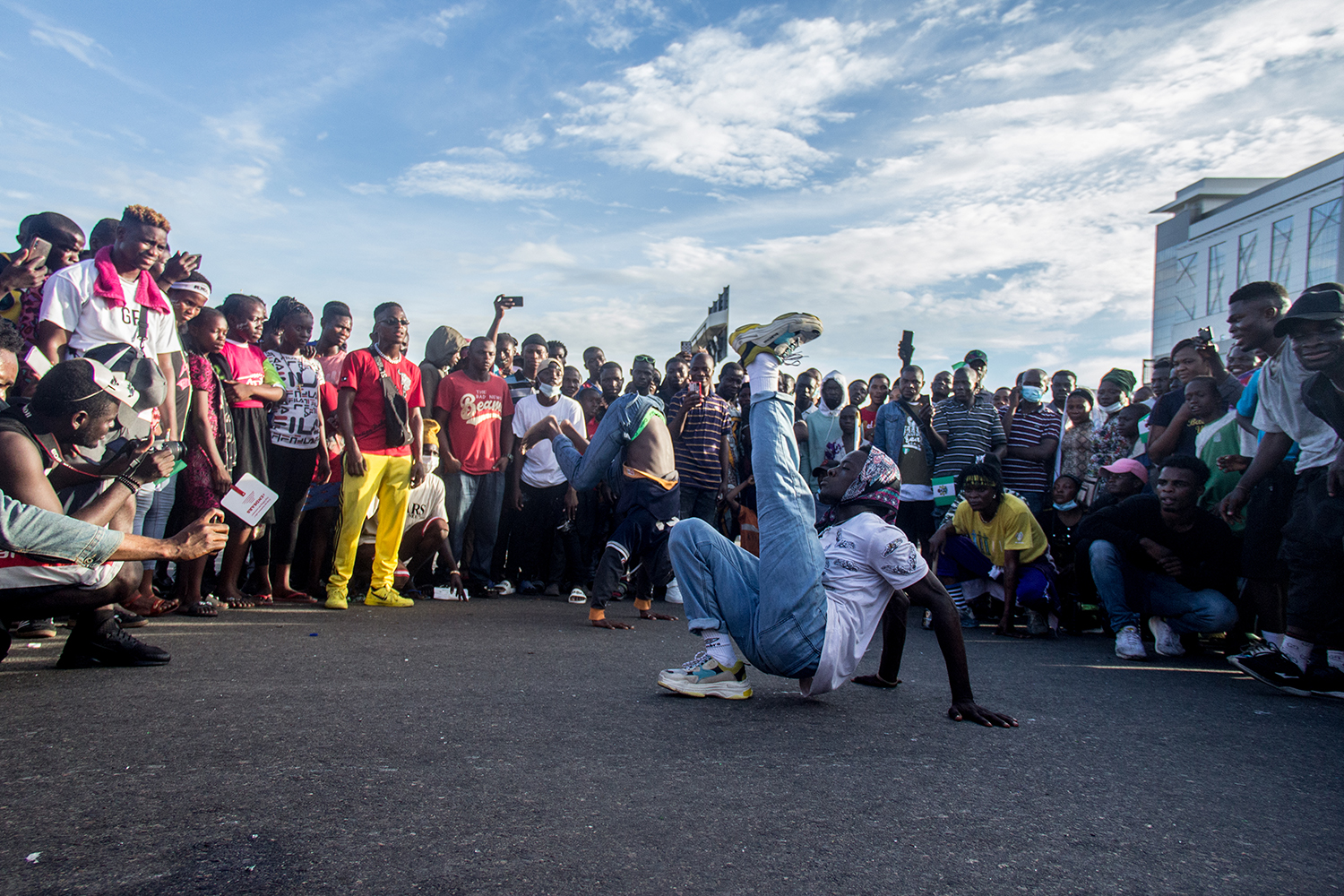 A group of young street dancers perform while the audience chants “End SARS” at the Lekki Toll Plaza on Oct. 18. Nelly Ating for Foreign Policy

The Nigerian Afro-pop musicians Folarin Falana, known as “Falz,” and Douglas Jack Agu, known as “Runtown”—both millennials—used their social media platforms to call for a peaceful demonstration on Oct. 8, demanding justice for victims and survivors of police brutality. That was how the protest started in Lagos’s upscale Lekki neighborhood, before it spread to other parts of the city and nationwide.

This strategy motivated more Nigerians to join the peaceful demonstrations. It marked the birth of an unconventional nonviolent civil resistance movement, which leveraged Nigeria’s cultural icons to bring people onto the streets. 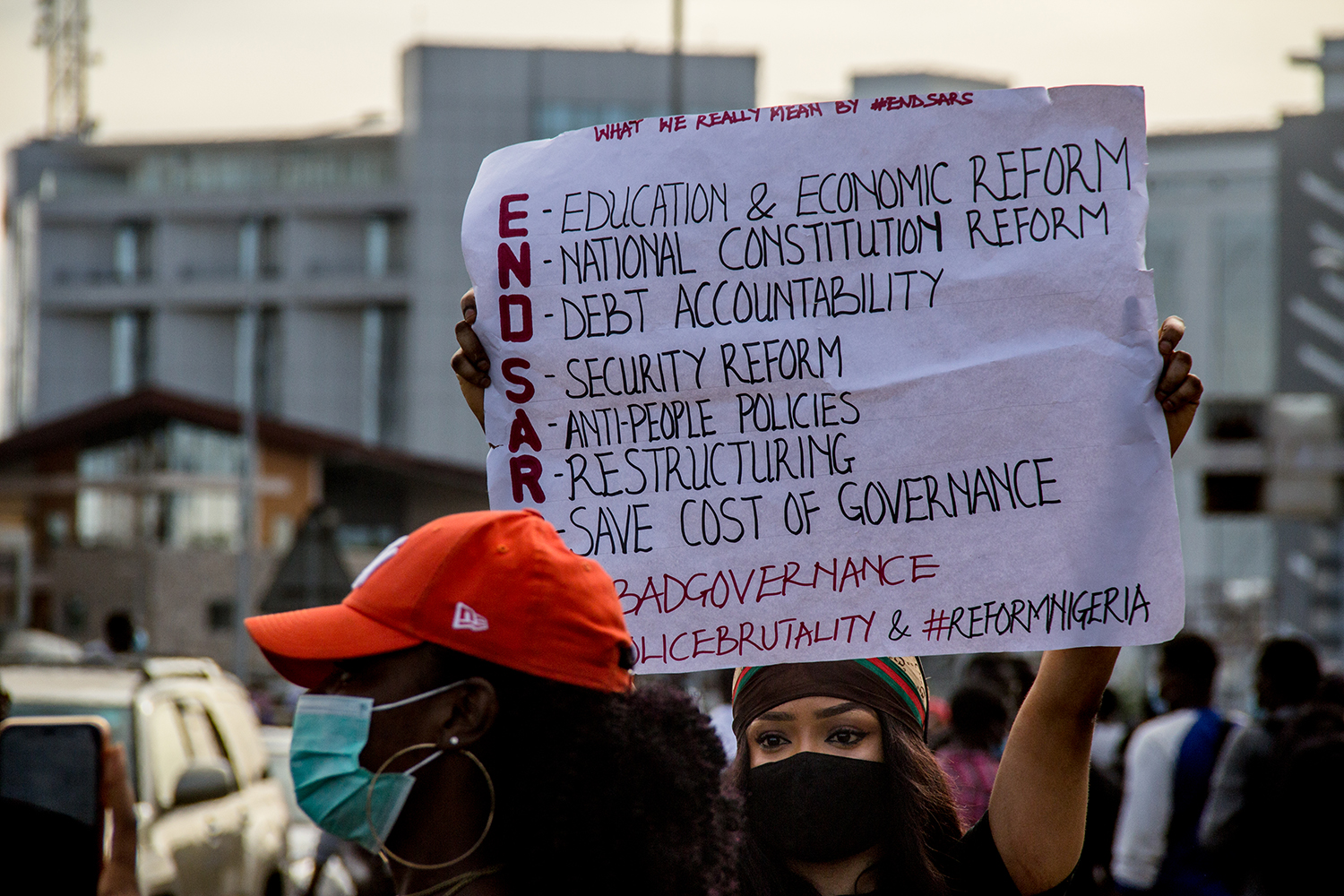 A woman holds a sign during a protest at the entrance to the Lekki Toll Plaza on Oct. 18. Nelly Ating for Foreign Policy

For a generation accused of clinging to smartphones and being addicted to the internet and pop culture, the protest was an unexpected shock. The opposition to SARS caught the government off guard.

As the protests spread across Nigeria, other celebrities and social media influencers led the demonstrations in their various states. When the government made a tone-deaf announcement that SARS has been disbanded, just as it had announced three years earlier, the youth followed up with a five-point agenda. They demanded justice for citizens killed because of police brutality, police training, a judicial inquiry to prosecute perpetrators, psychological evaluation of members of the police force, and increased salaries for officers. 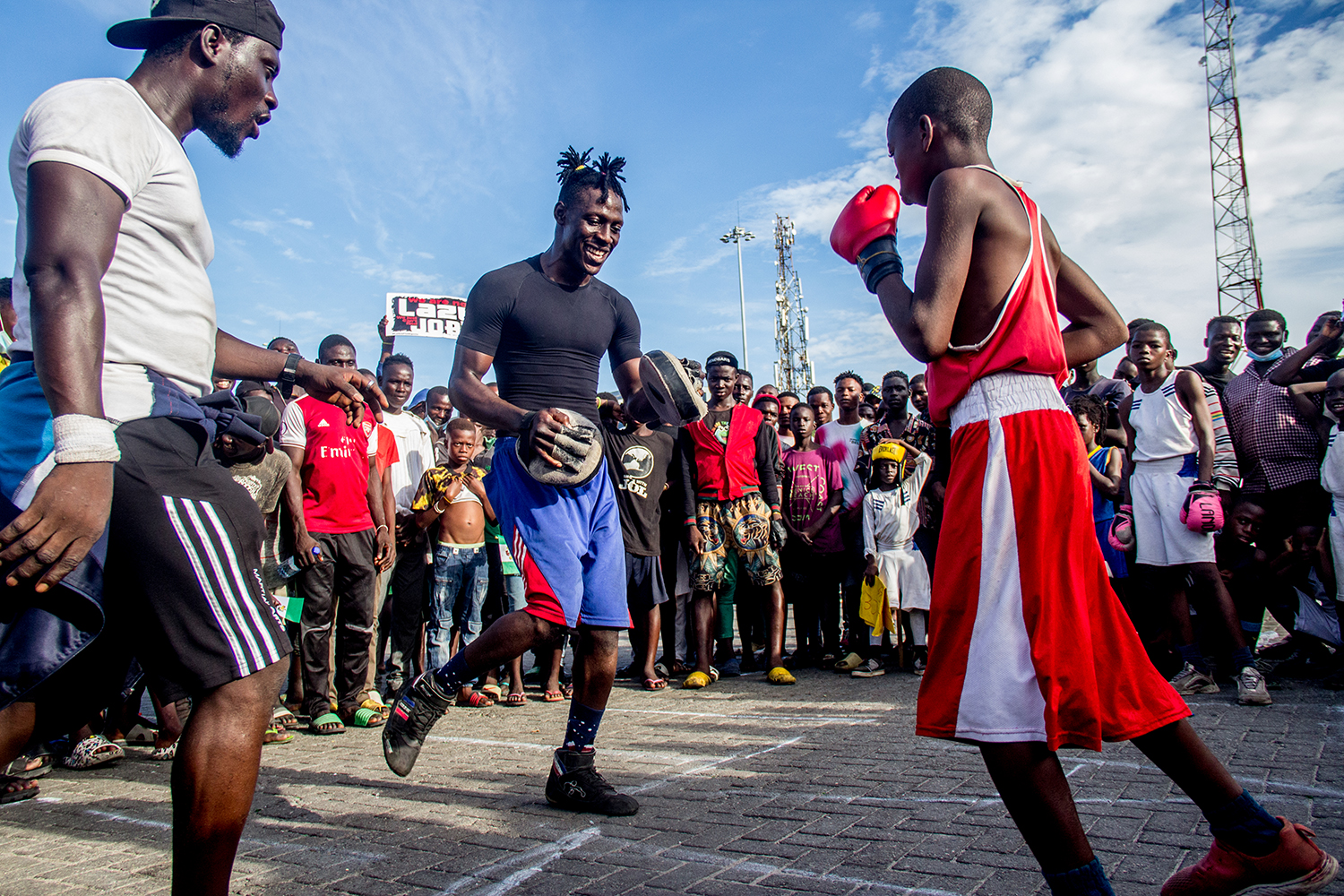 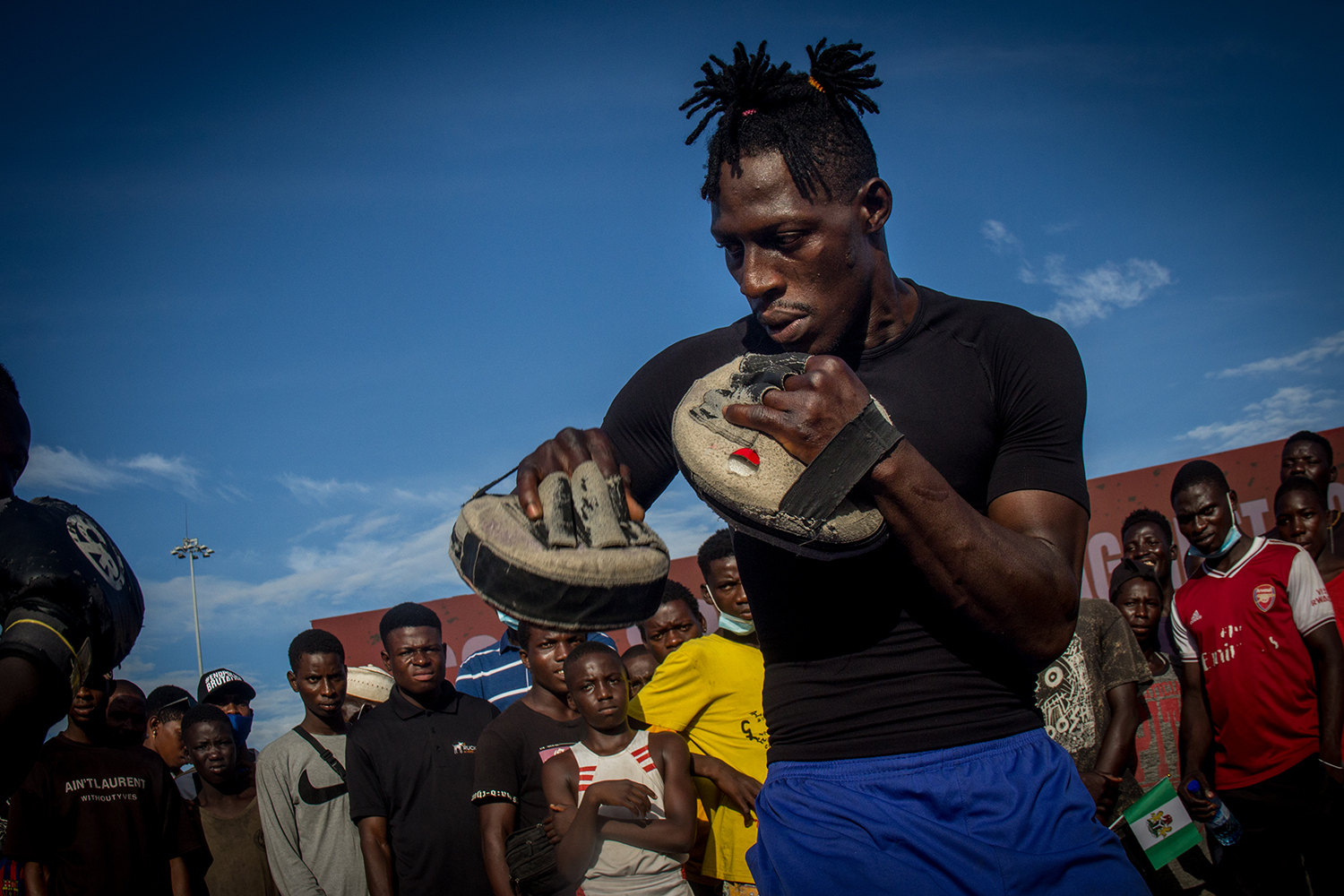 Child boxers from a low-income community in Lagos state came to the Lekki Toll Plaza on Oct. 18 to spar and join the protests. Nelly Ating for Foreign Policy

The protest organizers, led by a group of feminists, assisted in drafting the agenda. They circulated it on social media, winning many supporters across the globe from Hillary Clinton to Beyoncé.

Within two weeks, the all-female Feminist Coalition reportedly raked in monetary donations of over $380,000 to coordinate its logistics. They disbursed the funds to pay bail for arrested protesters, medical bills for wounded protesters, food and drinks, and private security to protect demonstrators. They also launched a help line to respond to emergencies.

For a generation accused of clinging to smartphones and being addicted to the internet and pop culture, the protest was an unexpected shock.

Standing behind the protesters were religious leaders, small and medium-sized businesses, and Nigerians living abroad, all lending their voices and platforms to call for the dismantling of the corrupt police unit. Nigerians in the diaspora turned up the pressure through protests at different embassies, calling for an end to SARS.

The sheer organization of these young Nigerians gave hope and renewed faith that Nigeria—a country of more than 200 million people where nearly 40 percent of people live in abject poverty—can work. 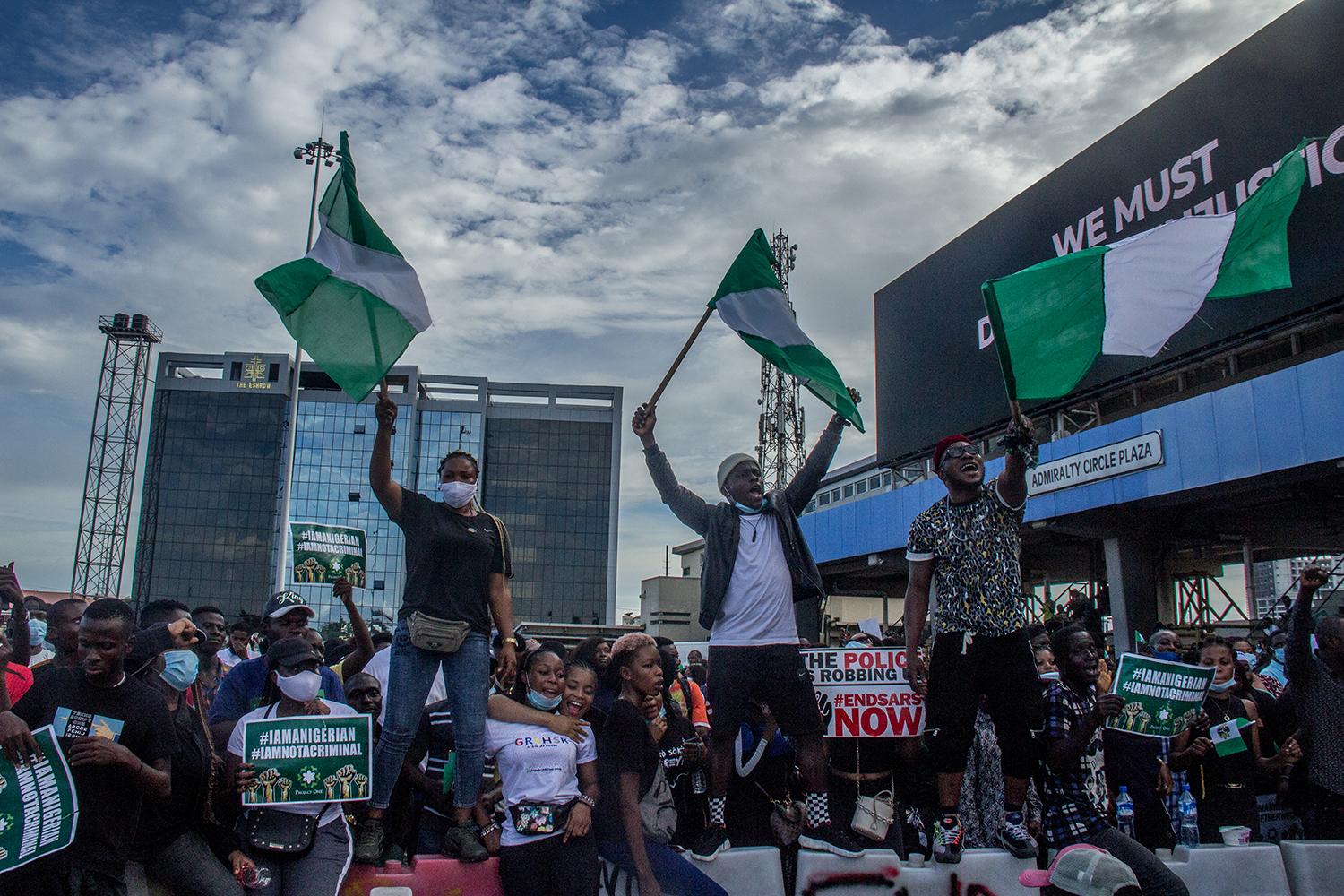 Protesters fly the Nigerian flag chanting “Soro soke,” a Yoruba phrase that translates to “Speak up” in English, in Lagos on Oct. 18. Nelly Ating for Foreign Policy

The movement has now gone beyond calling for an end to corrupt policing; it is also challenging the misuse of public funds and demanding solutions to the country’s unemployment crisis, poor infrastructure development, and bad governance.

Despite the violence, the #EndSARS protests could mark a turning point; 60 percent of Nigeria’s 200 million people are under the age of 25. The youth are now aware of their power more than ever.

Although the protests started peacefully, they turned ugly when the Nigerian Army shot at unarmed protesters on Oct. 20 at close range—an event that was recorded live on Instagram by a female DJ. Many young protesters were killed and injured while thugs allegedly sponsored by politicians infiltrated and disrupted the protests.

Despite the violence, the #EndSARS protests could mark a turning point. Nigeria has a youthful population, with about 60 percent of its 200 million people under the age of 25. But political apathy among the youth has resulted in the election of elderly politicians to public office.

The youth are now aware of their power more than ever. They’ve seen how much can be achieved with unity and are ready to demand change—especially as Nigerians look forward to the next general election in 2023.

Nelly Ating is a freelance reporter and doubles as a photojournalist reporting from the front lines of conflict zones in Nigeria. Twitter: @NellyAting Instagram: @nelly_ating