After a month of heavy fighting over the disputed enclave between Armenia and Azerbaijan, a negotiated settlement seems far off—and civilians are paying the price.

MARTUNI/KHOJAVEND, Nagorno-Karabakh—Here there is only one thing more concerning than the constant thump of artillery shells and rocket fire—and that is the distant whirring of a drone, capable of locking on its target from long range and with devastating consequences.

One vehicle lies mangled in the grass near the trenches that mark the front line of deadly fighting, shot from the sky by Armenian forces battling Azerbaijan for control of this enclave between the two countries. Soldiers say it is a Soviet-era An-2 biplane that has been repurposed and fitted with explosives for kamikaze bombing attacks. Its carcass has been left out like a defiant warning.

For over a month, the two countries have been locked in a bitter conflict over the mountainous region—referred to as the Republic of Artsakh by Armenia—which is technically part of Azerbaijan, but which is populated by, and governed by, ethnic Armenians. They are the worst hostilities in the ethnic and territorial conflict since the end of a six-year war in 1994, and sophisticated military equipment, such as drone technology acquired by Azerbaijan from Israel and Turkey, as well as the apparent use of Syrian mercenaries, is complicating things. 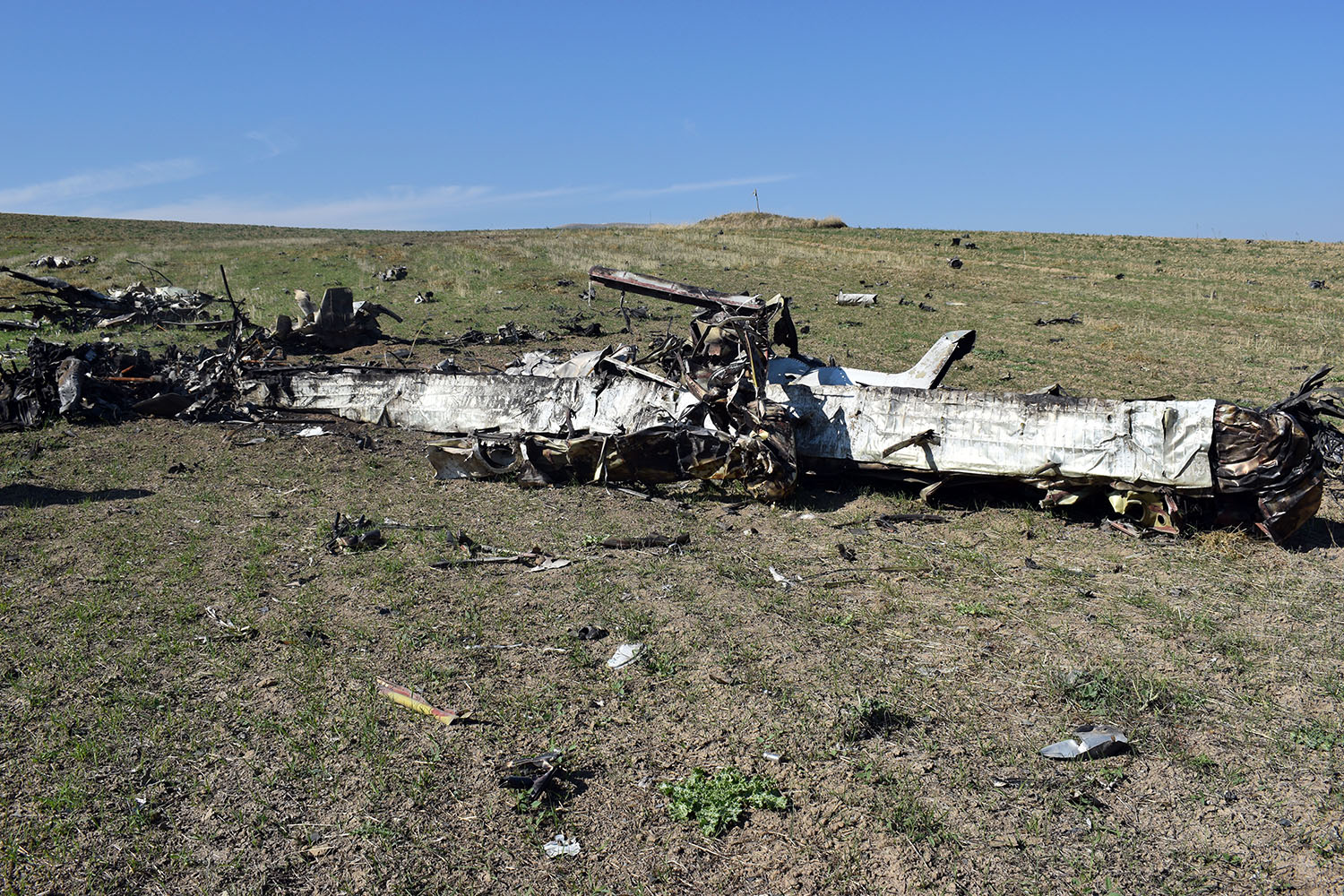 A drone that Artsakh Defense Army soldiers claim they downed near Martuni, Armenia, close to the front line with Azerbaijan, on Oct. 25. Soldiers say it is a Soviet-era An-2 biplane that has been repurposed and fitted with explosives for bombing attacks. Liz Cookman for Foreign Policy

The death toll is already large, if a far cry from the carnage of the 1990s. At least 1,068 Armenian troops are dead, and 40 civilians; Azerbaijan does not release casualty information. In Armenia, a country with a population of less than 3 million, hardly a single family has been untouched by tragedy. Diggers roam the cemetery in the capital, Yerevan, constantly digging fresh graves to try to keep up with demand as dozens of families grieve for their loved ones.

Thousands more are missing, but three attempts at a humanitarian cease-fire—brokered by Russia, France, and the United States—to recalibrate and retrieve the dead were all broken within hours. Another round of peace talks are set to begin on Thursday in Geneva, but on the front line there is no talk of compromise, only of winning.

“We believe in peace and that’s what we are aiming for—victory is peace. I don’t see us living together with Azerbaijanis,” a group of volunteers told me from the trenches, staying tight against the dirt walls as shells thundered all around. 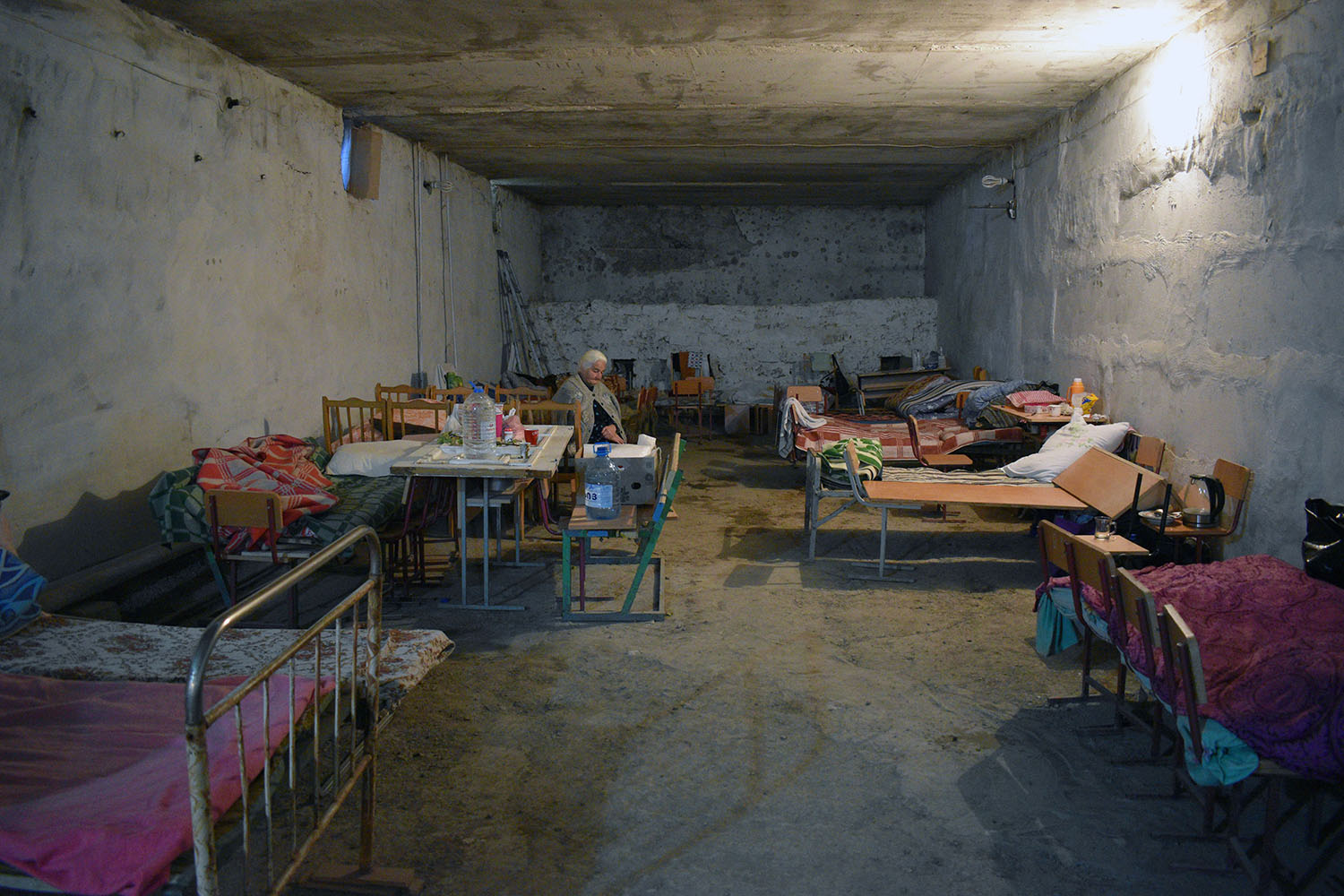 A woman mourns her grandson, who was fighting on the front line, after no news of his whereabouts for one week, in a bomb shelter in Stepanakert on Oct. 23.. Liz Cookman for Foreign Policy herey

The young men said they signed up to fight on the morning of Sept. 27, the same morning the violence began. They knew something had happened when they woke up and the phone lines were down. The volunteers have some military training, with military conscription mandatory for men between 18 and 20. Many cut their teeth during skirmishes in 2016, often referred to as the “April War.”

It’s not without risk. A few minutes before we spoke, Arman, 27, a hotel worker in normal times who did not want to give his full name, received a call with news that his friend had been killed while fighting near the southern city of Hadrut.

But the violence and death isn’t pushing the fighters away from winning their fight on the battlefield, despite the repeated international efforts at mediation. “It’s up to us to solve this; we don’t believe in a political solution,” said Hyak, 31, who works in a bank and also declined to give his full name. “Look at Syria, for 10 years they are not able to solve this. We call all Armenians to come here and help us solve this. If [politicians] could solve it, they would have done it already.”

Despite a small national population, the Armenian diaspora numbers around 7 million, and many have already rallied to the cause, raising funds to help refugees or traveling at short notice to lend a hand.

“Armenians need to support us, not on the internet but in real life,” Hyak said. 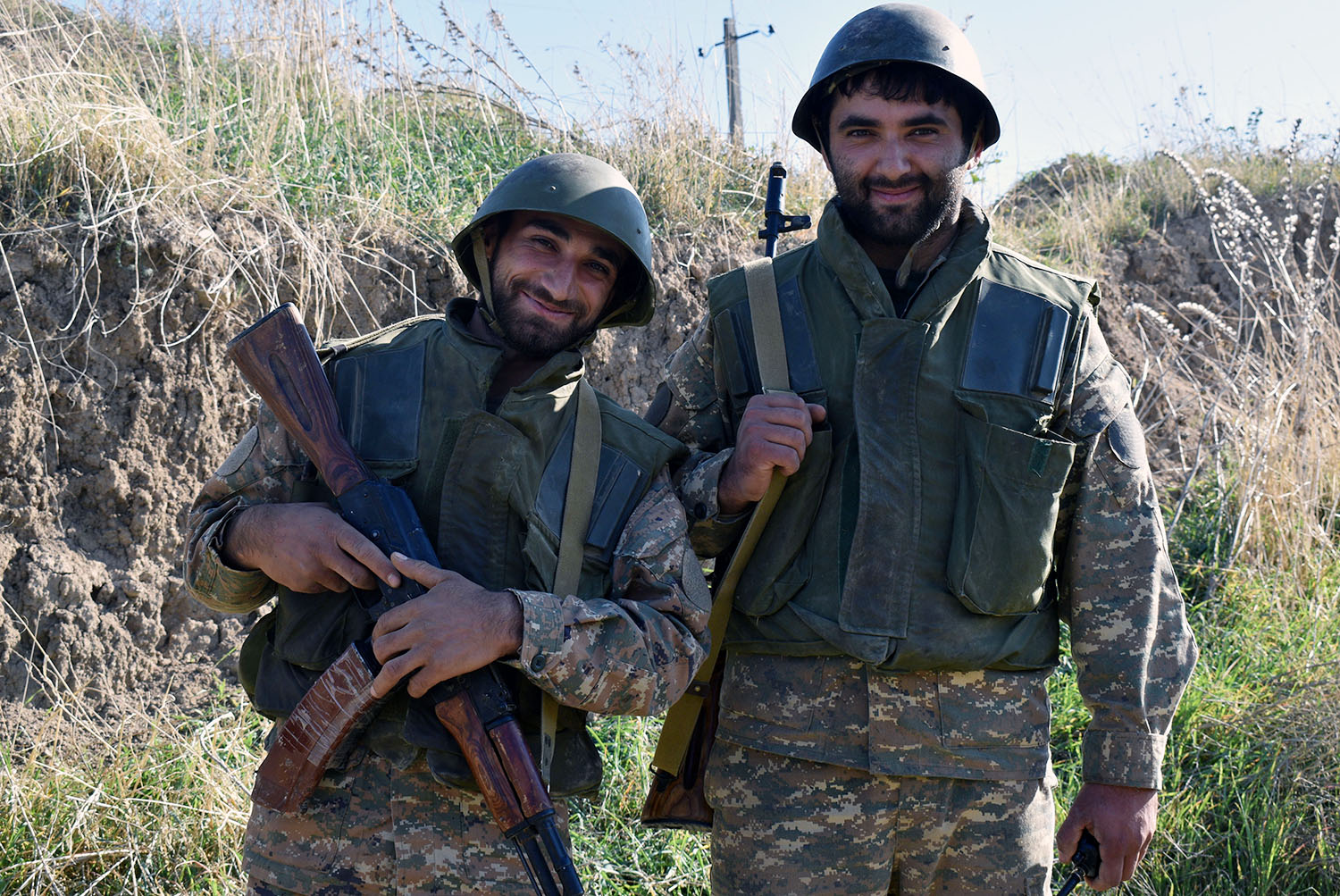 Laert, 27, a construction worker, and Artak, 26, who works in agriculture, both from Martuni near Nagorno-Karabakh’s front line, volunteer for the army on Oct. 25. Both withheld their last names out of concern for their safety. Liz Cookman for Foreign Policy

The men smiled with pride as they spoke. Although their lives are on hold—Hyak had been planning to get married before the conflict flared up—dedication to the cause runs deep within the Armenian psyche. Both sides are stubborn in their narratives, perhaps explaining why little political progress has been made over the past several decades.

Armenian accusations of a looming genocide, coupled with allegations about Turkey’s regional ambitions, have fueled intransigence in Yerevan. Azerbaijan, for its part, has shown little willingness to compromise, either. The lack of flexibility from either party means the conflict risks spiraling beyond the help of mediation.

The young men I spoke to were all from Martuni—or Khojavend in Azerbaijani—a city that lies close to the border with Azerbaijan. Its name roughly translates as “ready to fight.” 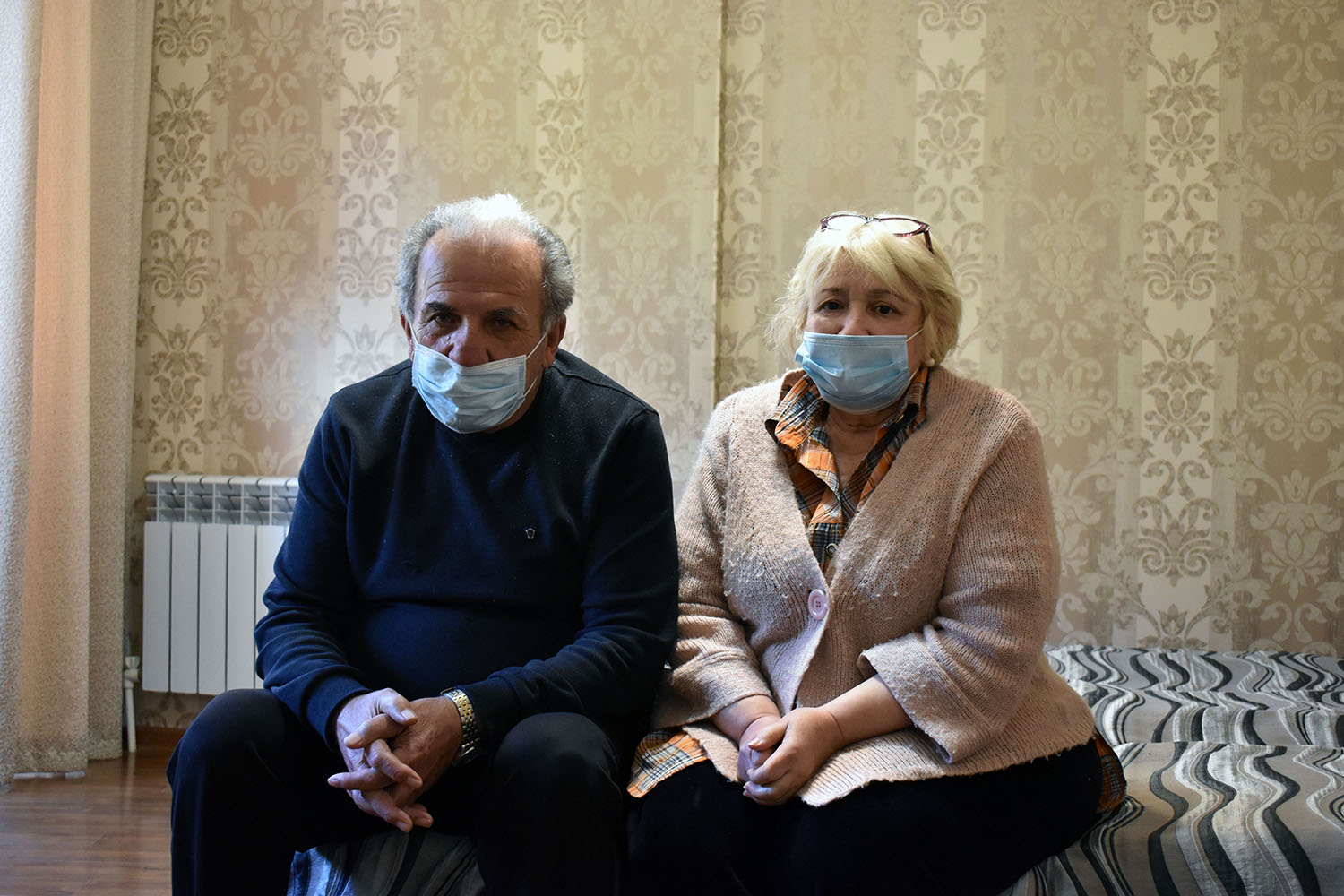 A couple from Stepanakert are seen in the resort town of Jermuk, Armenia, on Oct. 26, after they were forced to flee their home. The wife, who has knee problems, was unable keep running to a shelter there for protection from attacks. 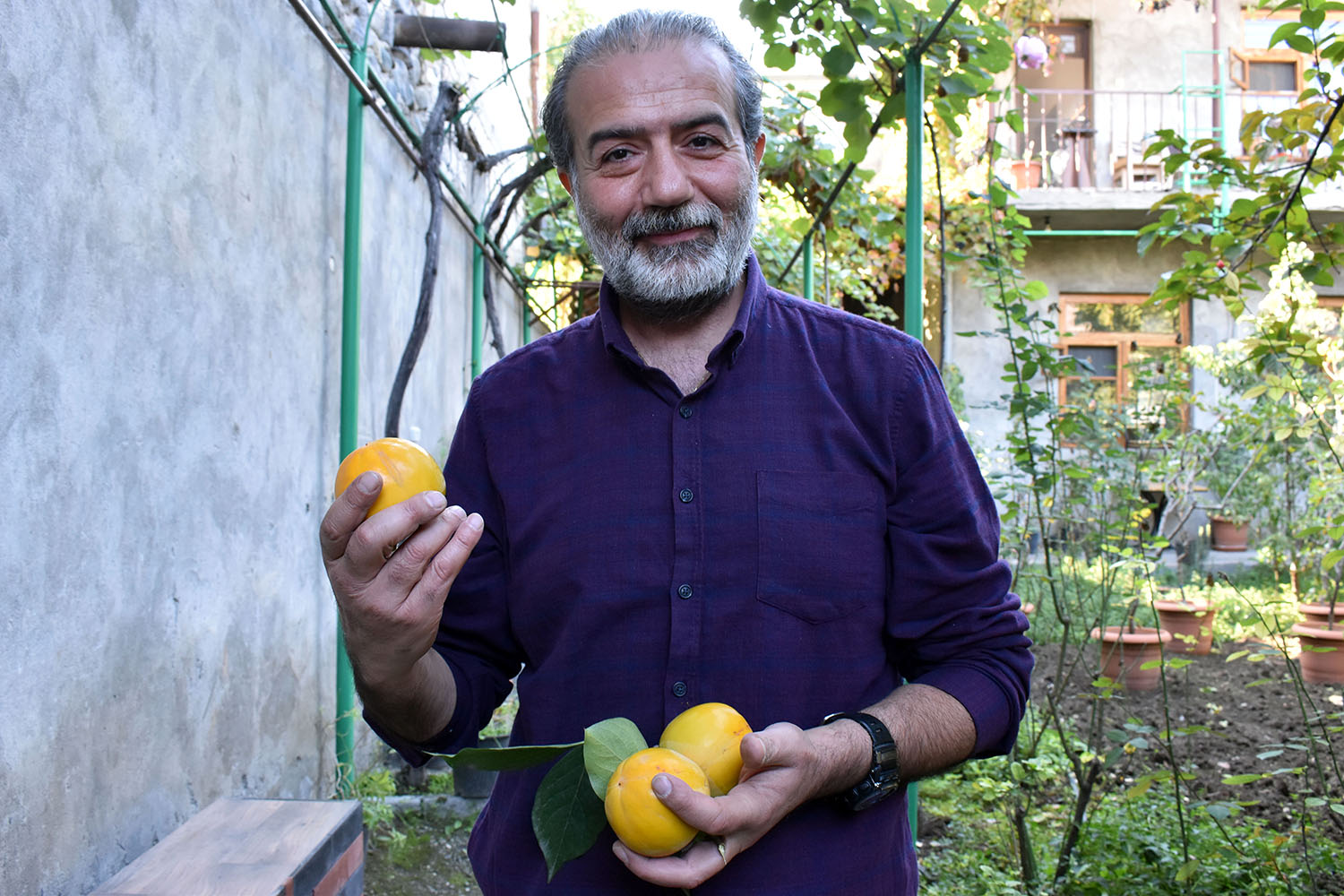 Hovik Esmerian, a Syrian Armenian who fled civil war in 2012, seen in Stepanakert on Oct 23, now sends food from his restaurant to soldiers on the front line. Liz Cookman for Foreign Policy

The city, latticed with scars from previous conflicts, has been hit hard by intensive shelling over the past month, and fewer than 500 remain out of a prewar population of more than 5,000.

Those who remain live a hybrid life of conflict and mundanity. The old men who stayed shuffle around in camouflage and slippers, carrying guns. Some walk streets strewn with the debris of the buildings that once lined them, taking shopping bags home while seeming to ignore the chaos around them.

As the bombardments begin in the late afternoon, people and even stray dogs take shelter indoors. Intact windows are more or less a thing of the past, and the plastic sheeting nailed across the window frames shudders as each shell hits. If civilian casualties aren’t higher, that may be because people here have plenty of practice dashing into bunkers.

Still, both sides have accused each other of targeting civilians. I visited heavily damaged houses in the Nagorno-Karabakh city of Askeran and the capital, Stepanakert, as well as the Cathedral of the Holy Savior in Shushi, which was partially destroyed in a double attack. 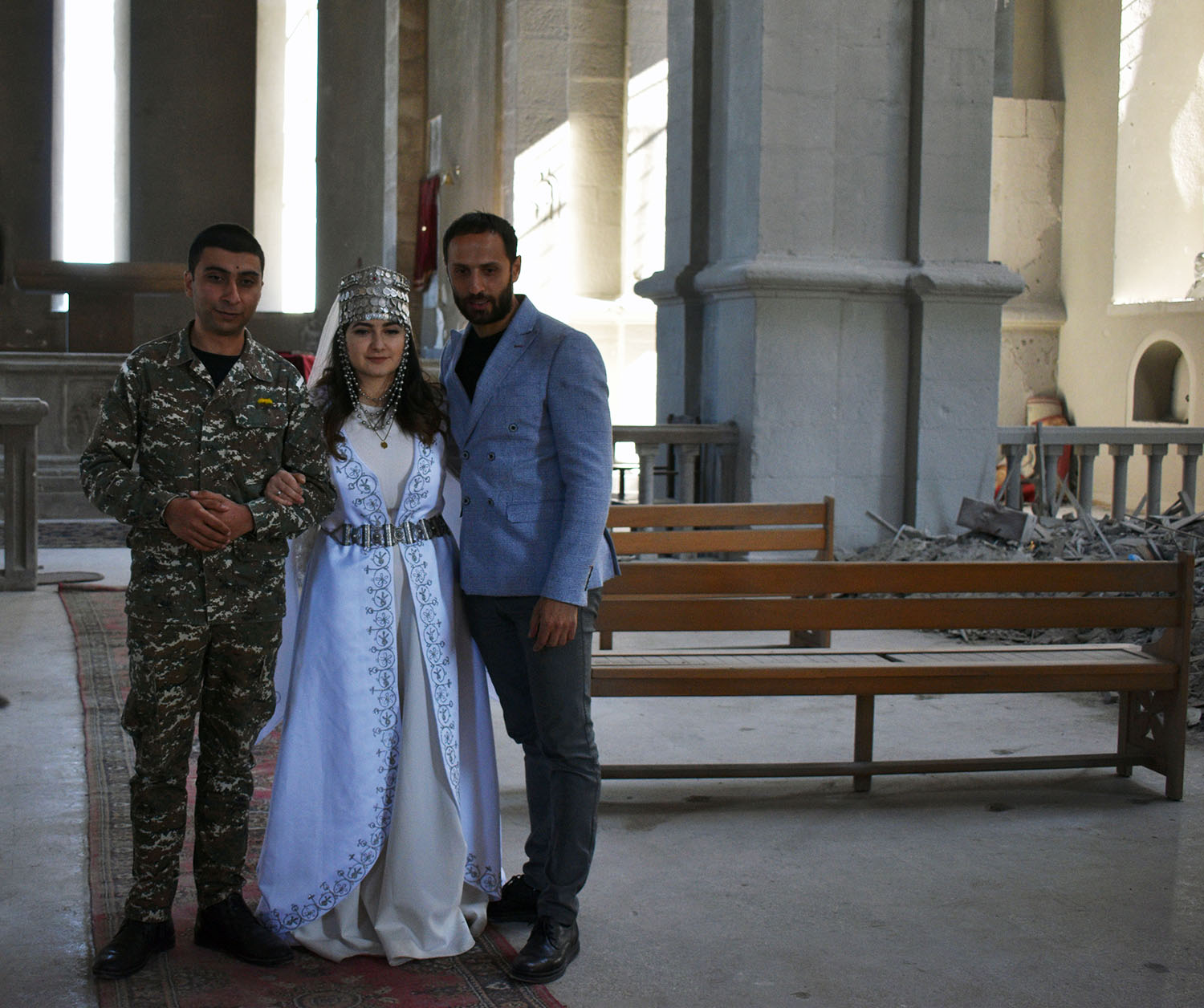 A journalist poses with an Armenian couple who married in an act of defiance at a church in Shushi, Nagorno-Karabakh, on Oct. 23. Liz Cookman for Foreign Policy 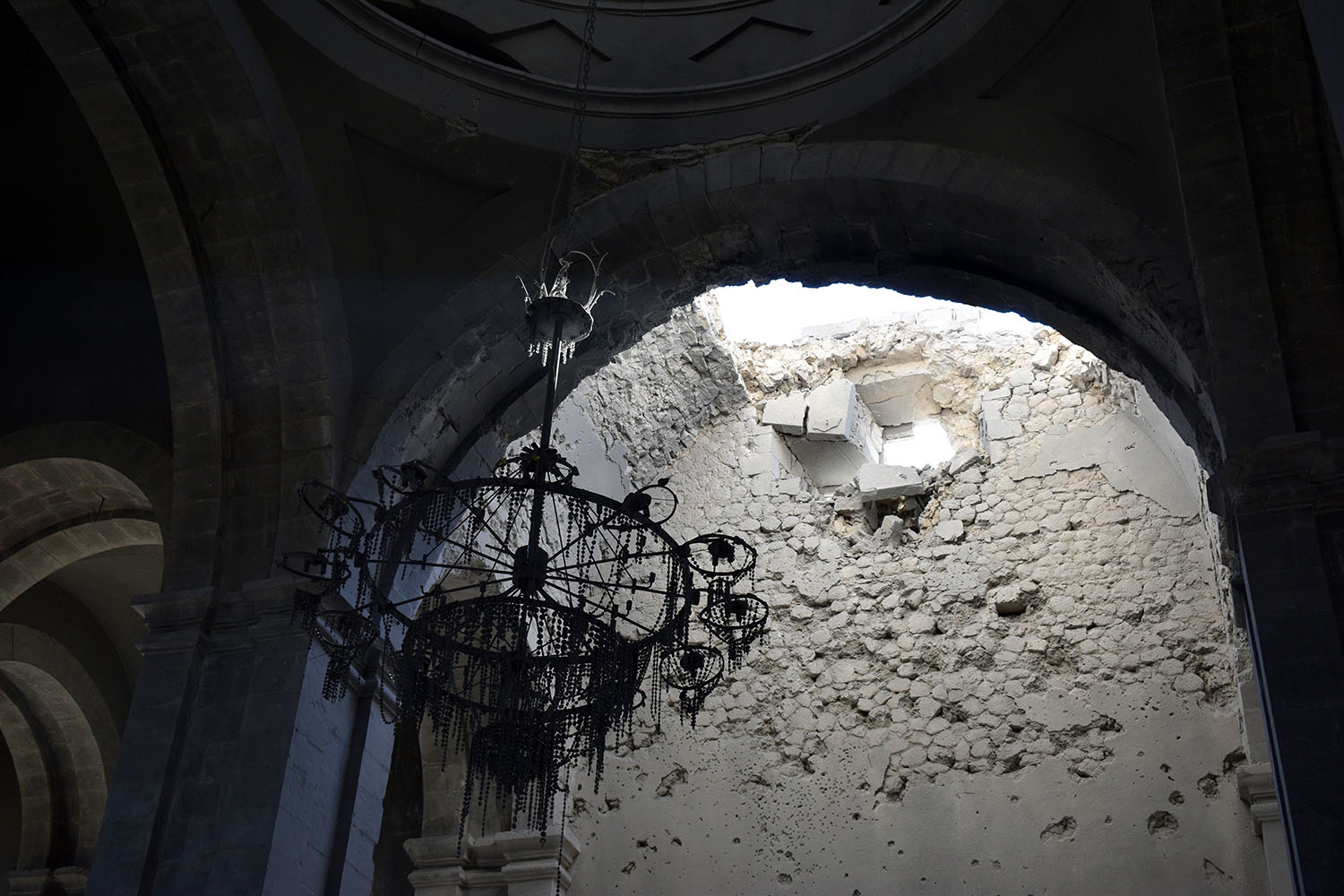 The Shushi church was partially destroyed in a recent Azerbaijani attack. Liz Cookman for Foreign Policy

In a deeply Christian society and a country surrounded by Muslim nations, the targeting of a church feels to many in Armenia like an attack on local identity. The image of its collapsed dome cuts deep, yet in an act of resilience and a statement of survival, a local soldier and journalist married there this week, surrounded by rubble.

The press secretary of Armenia’s defense ministry said on Wednesday that a maternity hospital was targeted by Azerbaijani forces, and a video allegedly showing two Armenian prisoners of war being executed is being investigated by the Council of Europe. 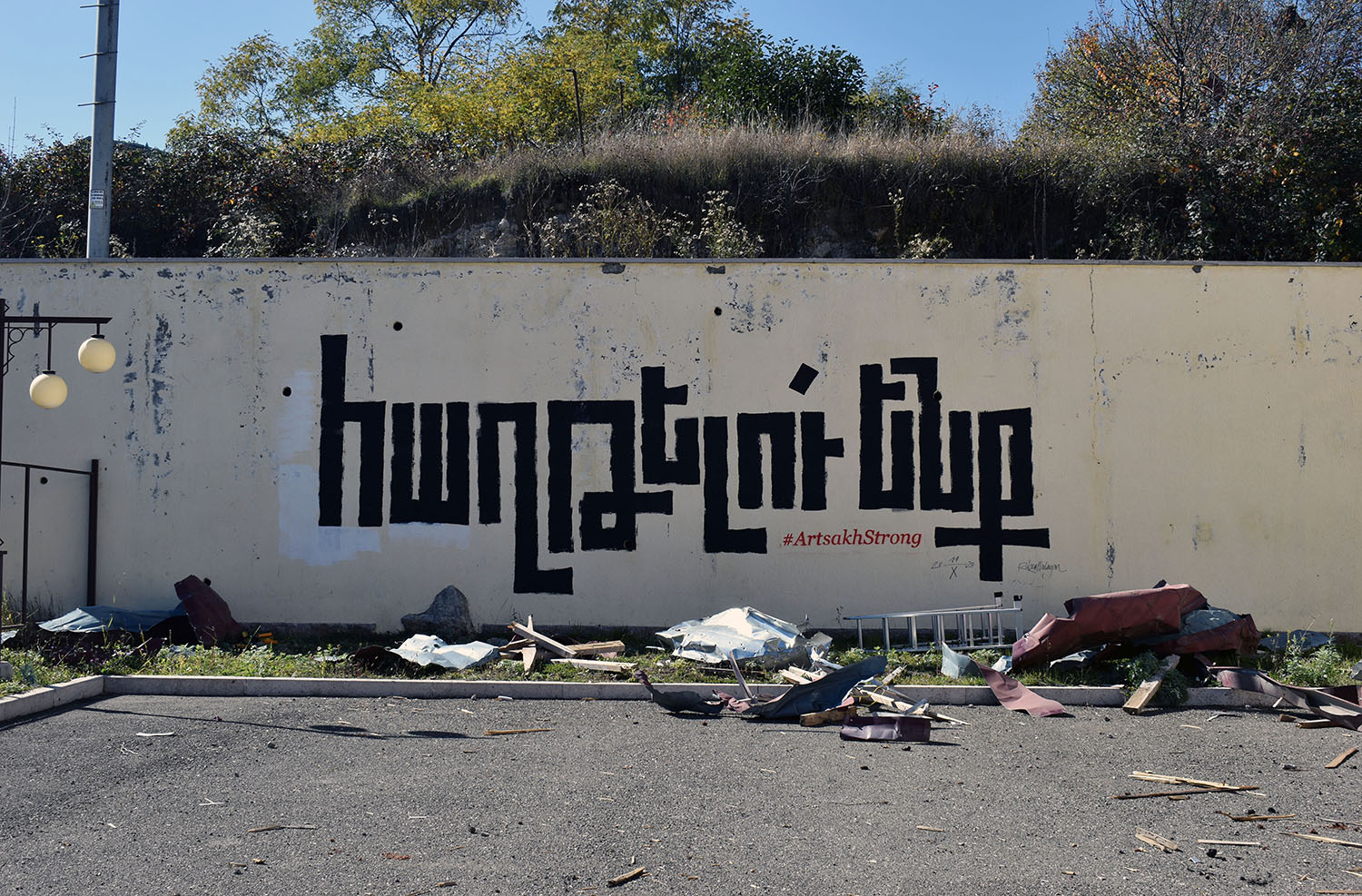 But the Artsakh Defense Army, the armed forces of the Republic of Artsakh, has also been accused of missile attacks on Ganja, one of Azerbaijan’s largest cities. On Wednesday, Azerbaijan said missiles killed 21 civilians and injured many more in the city of Barda in what would have been the deadliest attack of the war.

Ultimately it is ordinary people who will pay the price of the two countries’ inability to come to an agreement, even if they maintain that they are defiant.

“I can’t leave the city. My sons are on the front line and I have to wait for them. It’s not right if they come back and they see the door closed,” said Lida Mkrtchyan, 62, a school teacher from Shushi, who has three sons on the front line—like most of the people in who’ve stayed behind. 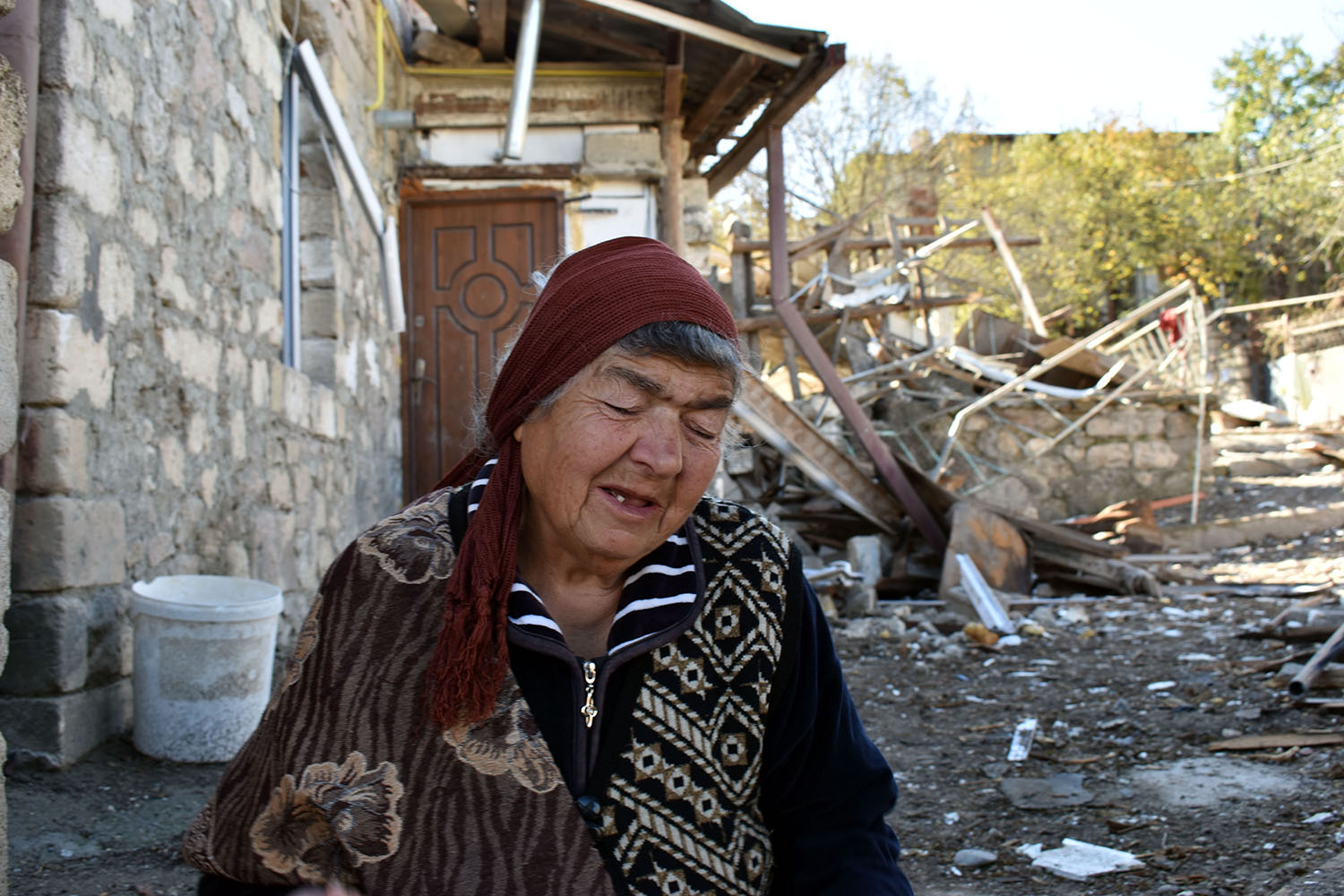 Rossa Sargsyan weeps on Oct. 23 as she describes damage to the Stepanakert house where she has lived for 63 years. Liz Cookman for Foreign Policy herey

Rossa Sargsyan, 83, wept as she showed the damage to the Stepanakert house she has lived in for 63 years. She said the force from the attack was so strong it knocked her neighbor out of bed.

“It doesn’t matter if I stay in a house or a barn, they will not make me leave,” Sargsyan said.

“We are waiting for the victory to come and everything will be restored.”

The Diaspora May Be Armenia’s Biggest Asset in Nagorno-Karabakh

From online to the front lines, the 7 million-strong Armenian diaspora is rallying to the fight in Nagorno-Karabakh.

After fighting Turkey’s battles in Libya, the Syrian National Army is caught in the conflict between Armenia and Azerbaijan—and dozens are dying.