As U.S. voters head to the polls, recent elections elsewhere show what happens when embattled incumbents cling to power.

Here’s what we’re watching this week: Democratic elections around the world have ended in violence and chaos in recent weeks, Islamist militants launch two attacks in the Democratic Republic of the Congo, and why the protests against stricter abortion laws in Poland are the largest in a generation.

Here’s what we’re watching this week: Democratic elections around the world have ended in violence and chaos in recent weeks, Islamist militants launch two attacks in the Democratic Republic of the Congo, and why the protests against stricter abortion laws in Poland are the largest in a generation.

The World’s Other Elections

The United States is bracing for one the most significant and contentious elections in living memory. Businesses have boarded up their windows in anticipation of civil unrest, incumbent President Donald Trump has refused to commit to a peaceful transfer of power should he lose and praised supporters who harassed a Joe Biden campaign bus on the road, and on Saturday police pepper-sprayed a crowd of peaceful protesters marching to the polls in North Carolina. If this were happening in another country, the U.S. State Department might well have issued a statement of concern.

But while the U.S. political strife dominates headlines, there have been a number of significant presidential and legislative elections around the world in recent weeks that are worth keeping tabs on, as contested results threaten to tip their countries into chaos.

At least 21 people have been killed in Guinea in the wake of presidential elections on Oct. 18 that saw incumbent President Alpha Condé win a controversial third term in office. Condé said a constitutional referendum in March reset the clock on the two-term limit, but his August announcement that he would run again sparked deadly protests. Condé’s main opponent, Cellou Dalein Diallo, alleged widespread fraud and said he would contest the results.

Condé may have taken inspiration from Russian President Vladimir Putin, who sidestepped his term limit by holding a constitutional referendum over the summer. And while the United States and France urged Condé to step down at the end of his term, Russia has supported him.

Voters went to the polls in Ivory Coast last Saturday in a similarly controversial presidential election, with President Alassane Ouattara seeking a third term. Like Condé and Putin, he has argued that a 2016 referendum on a new constitution extended his term limits. Early results show Ouattara on track to win after opposition candidates called for a boycott of the vote.

At least 30 people were killed in clashes ahead of the vote, and five more died on election day. The unrest evokes memories of Ivory Coast’s 2010 presidential election, which sparked a civil war as military forces loyal to former President Laurent Gbagbo clashed with supporters of Outtara, then the president-elect.

Tanzanians also voted last week. Once a regional beacon of democracy, Tanzania saw a renewed crackdown on the opposition in the wake of last Wednesday’s vote. President John Magufuli was reelected with around 84 percent of the vote. Some 300 staffers and activists from two opposition parties have been detained or abducted in recent days, the Guardian reports. While domestic and international observers have raised concerns about widespread irregularities, there is no way to challenge the results in court.

During his first term in office, Magufuli presided over a rollback of civil liberties and human rights, a trend that is set to continue as his Chama Cha Mapinduzi party won an overwhelming majority of seats in the parliament, enough to single-handedly change the constitution. 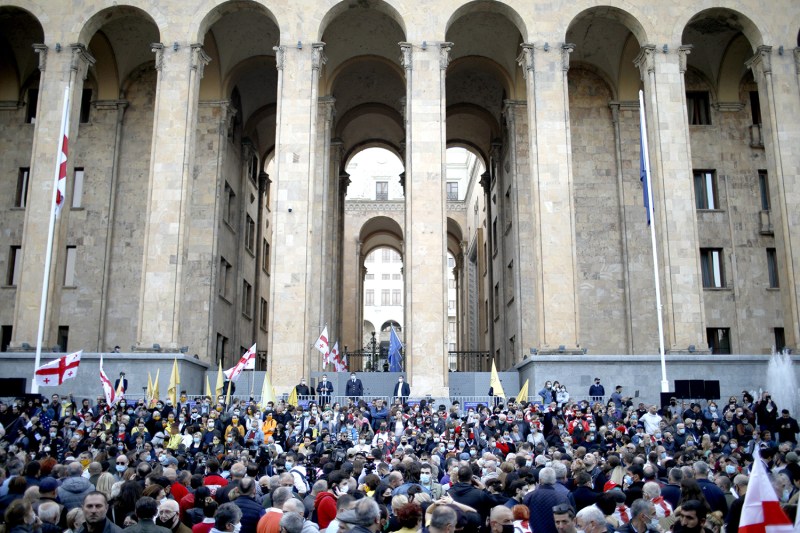 Georgian opposition supporters protest against the results of the parliamentary election outside the offices of the Georgian Parliament in Tbilisi on Nov. 1. David MdzinarishviliTASS via Getty Images

Meanwhile in Georgia, a political standoff is brewing in the wake of last Saturday’s legislative elections. The ruling Georgian Dream party declared victory with 48 percent of the vote, but opposition parties say the elections were rigged. Observers from the Council of Europe, NATO, and the Organization for Security and Cooperation in Europe said the election was competitive, but they voiced concerns about allegations of pressure on voters and blurred lines between the state and the ruling party.

Protesters and opposition members took to the streets of the capital, Tbilisi, as the results trickled in. Georgia is no stranger to political strife and will likely find a way through the crisis. But low voter turnout and the fact that opinion polls found that 20 to 60 percent of people were undecided in the days before the vote suggest that the public isn’t convinced by either party, which could spell trouble ahead for the young democracy.

Voters in Myanmar go to the polls on Nov. 8. Five years ago, the general elections were celebrated as a breakthrough after decades of military rule: Aung San Suu Kyi’s National League for Democracy won by a landslide. But the party has since failed to live up to its name or its leader’s Nobel Peace Prize. The country’s election commission has canceled voting in dozens of areas largely inhabited by ethnic minorities, depriving an estimated 1.5 million people of the right to vote.

Over 1 million Rohingyas fled the country in 2017 amid a genocidal campaign by the military in Rakhine state. Those who remain have been denied citizenship and, by extension, the right to vote or stand for election. But Western countries have remained largely silent, perhaps because they fear that the military poses an even greater threat to democracy in Myanmar, as Andrew Nachemson writes for Foreign Policy.

Attacks in Congo. More than 20 people were killed in an attack on a church in the Democratic Republic of the Congo’s restive North Kivu province last Wednesday. Authorities believe Islamist militants from the Allied Democratic Forces (ADF), an armed group operating in the region since the late 1990s, were responsible for the attack. Two days later, 17 people were killed in a raid on a village in the Buliki area of the province, which local officials attributed to the ADF.

Attacks by the ADF have surged over the past year in response to a Congolese military operation that has driven the group out of bases near Congo’s border with Uganda. Militants have splintered into smaller mobile groups that have retaliated with indiscriminate attacks against civilians. The United Nations estimates that 1,000 people have been killed by the group since the start of 2019. Last month, the group allegedly carried out an assault on a prison in the city of Beni, freeing 1,300 prisoners including militant fighters. 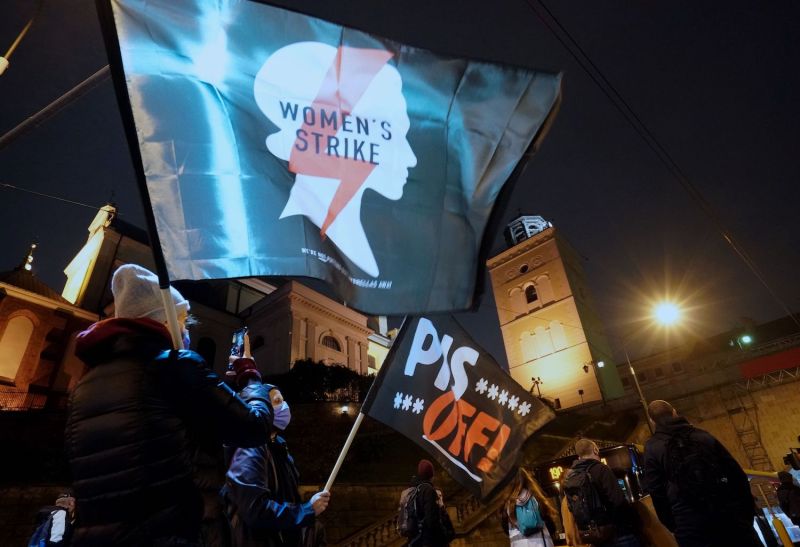 Demonstrators wave flags as they block a street during a protest against the tightening of Poland’s already restrictive abortion law on Nov. 2 in Warsaw.JANEK SKARZYNSKI/AFP via Getty Images

Protests grow in Poland. Tens of thousands of people have taken to the streets of Warsaw to protest a recent court decision that would impose a near-total abortion ban. The demonstrations are the largest in Poland since the fall of communism in 1989. Poland already had the strictest abortion laws in Europe, but an Oct. 22 decision by the country’s Constitutional Tribunal would prohibit the procedure even in the event of severe fetal abnormality.

Such cases currently account for 98 percent of abortions carried out in Poland, but women’s rights groups estimate that tens of thousands of women travel abroad for the procedure each year. Once the new ban comes into effect, abortion would only be allowed in instances of rape, incest, or risk to the mother’s life.

Opinion polls show that a majority of Poles are opposed to tightening abortion laws. But last year, a group of conservative and far-right members of the parliament asked the country’s top court, where the majority of justices were appointed by the ruling conservative Catholic party, to rule on the issue. When the Alabama State Senate passed a similar ban last year, I wrote about the devastating consequences of Romania’s abortion ban during the communist period. (In October 2019, a judge issued a temporary injunction, halting the law shortly before it came into effect.)

Malnutrition spikes in Yemen. Severe child malnutrition has reached record levels in parts of southern Yemen, and 100,000 children are at risk of dying, according to recent analysis by U.N. agencies. After two years of progress in fighting the worst famine in a generation, acute malnutrition among children has risen by 10 percent in the country’s south since January. “If the war doesn’t end now, we are nearing an irreversible situation and risk losing an entire generation of Yemen’s young children,” said Lisa Grande, the U.N. humanitarian coordinator for Yemen.

Did Trump know about the Venezuela plot? Remember back in the spring when two former U.S. Special Forces soldiers led a botched attempt to invade Venezuela—only to be caught, paraded on television, and later sentenced to 20 years in prison? The U.S. government denied all knowledge of the plot, which at the time appeared concocted by Jordan Goudreau, a former Green Beret-turned-security contractor.

In a new lawsuit filed on Friday by Goudreau against a political operative aligned with the Venezuelan opposition, he says at least two Trump administration officials knew about and encouraged the plot. “Drew Horn originally wanted to set up a meeting between myself and Donald Trump at Mar-a-Lago … a direct face-to-face, but that never happened,” Goudreau alleged in an interview with reporters from the Miami Herald and McClatchy.

In a separate development, The Associated Press reports that former U.S. Marine Cpl. Matthew Heath was arrested in Venezuela on Sept. 10 and has been accused of spying for the Trump administration. Heath was also arrested this year in Colombia after traveling to the country in a fishing boat with two other U.S. military veterans. His family says he was trying to make his way to Aruba.

Deepening the mystery, embattled Venezuelan President Nicolás Maduro, who rarely misses an opportunity to point fingers at the United States, has said little about Heath’s arrest.

Killing a (sausage) king. The Russian meat factory magnate Vladimir Marugov, known as the “Sausage King,” was killed by a crossbow in an outdoor sauna on his country estate in the early hours of Monday morning. Armed intruders broke into the sauna and demanded cash from Marugov before shooting him with the crossbow. The assailants were found in a nearby village during a police search, but it is still unclear who or what was behind the attack.