“We had hopes, but we are not allowed to hope,” said one survivor of the fatal assault on Afghanistan’s biggest university.

KABUL—Abdul Akbari was in his bed at Ali Abad Hospital in Kabul, nursing a gunshot wound in his left leg. He clearly remembered what happened in the terrorist attack on his university campus in Kabul on Monday.

“The terrorists came as suicide attackers and killers, murdering many. One of them, wearing a type of security guard uniform and no face covering, opened our classroom door and looked us straight in the eyes, shouting ‘Allahu akbar’ before starting to shoot,” Akbari said. “Many of my friends are dead. I saw them lying on the floor when I tried to escape.”

The 22-year-old student survived, but of the 13 students taken to Ali Abad, he’s one of the luckier ones. Across the hall, in a spartan intensive care unit, another student lay unconscious with four bullets in his belly and a growing pool of blood under his bed. The nurses were not optimistic.

At least 22 people were killed and dozens more injured in a terrorist attack Monday at Kabul University, Afghanistan’s largest, with a student body of about 22,000. The Islamic State in Afghanistan claimed credit for the attack. It was just the latest sign that the fragile peace deal inked this year between the United States and the Taliban is far from the final word on a conflict that has gutted Afghanistan for decades.

The attack is yet another Islamic State assault on education in just over a week.The six-hour siege started in the late morning and ended with Afghan forces and U.S. commandos killing three attackers. All afternoon, loud explosions and ongoing gunfire rocked the university campus, where many students were sheltering while the majority had managed to flee.

The attack is yet another Islamic State assault on education in just over a week, coming shortly after an attack on a private education center on Oct. 24 in a mainly Shiite Kabul neighborhood, killing at least 30 people, most of them teenage students.

The Taliban were quick to deny Monday’s attack but were blamed by a number of Afghan government officials regardless; since signing the peace deal with Washington, the Taliban have launched a nearly unprecedented campaign of violence against Afghan government forces and civilians. The United Nations documented 5,939 civilian casualties in the first nine months of 2020, including more than 2,000 killed, and said last week that peace talks have failed to slow this toll.

As U.S. troops pull out, many Afghans worry the violence will simply escalate. One Afghan National Police officer, his black boots covered in dry blood, his face cadaverous, admitted he wasn’t hopeful. He asked that his name be withheld. 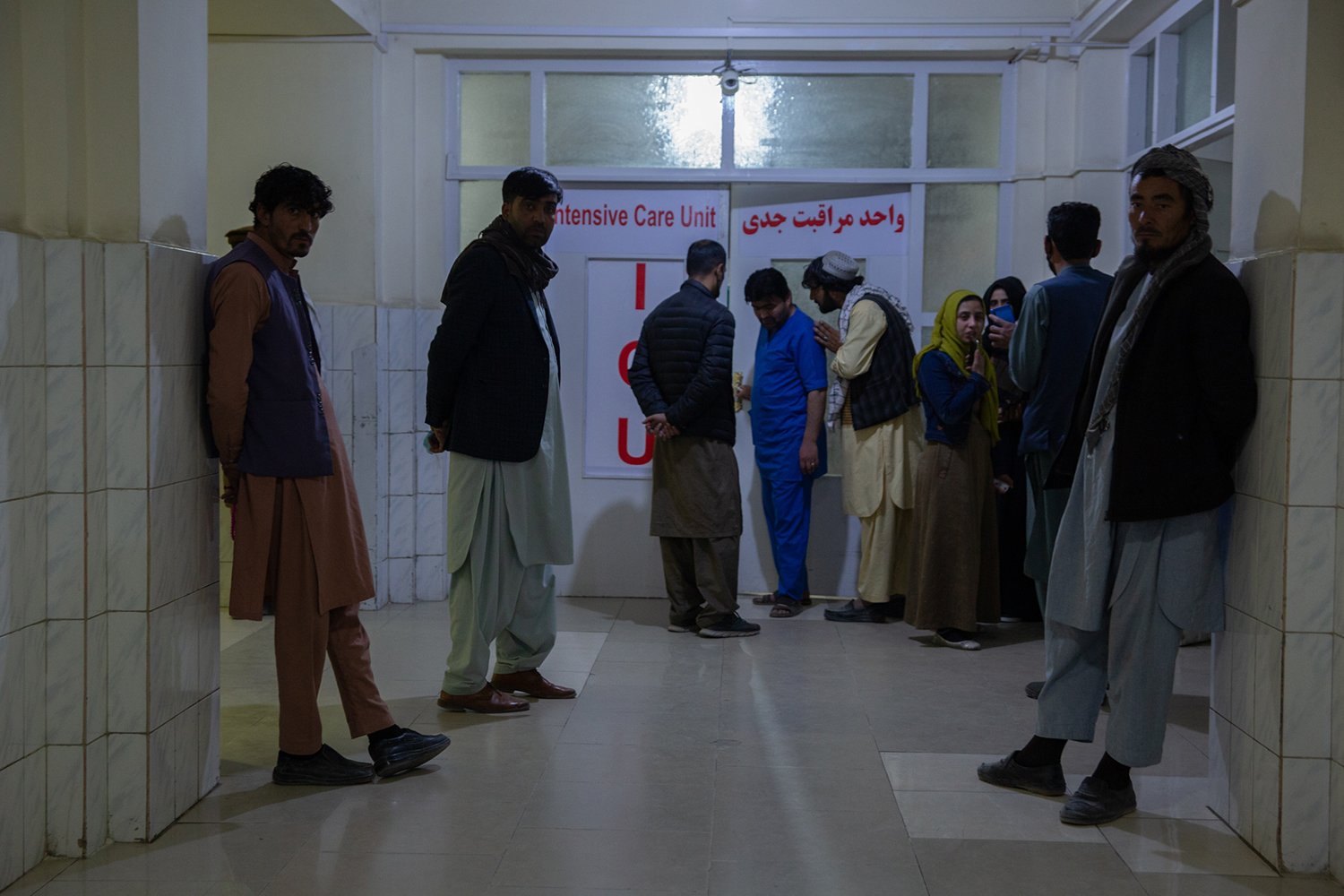 Family members of students injured in the Kabul University attack wait outside the intensive care unit at Ali Abed hospital, a clinic right opposite the university, on Nov. 2. Stefanie Glinski for Foreign Policy

“We carried dozens of dead bodies out of the university campus. Classrooms were covered in blood. It was carnage,” he said, sure that the official number of deaths would still rise. “It seems that with every day, we’re getting further away from peace. There is no safe place in this country.”

“It seems that with every day, we’re getting further away from peace.”

Afghanistan has seen over four decades of grueling and tiring conflict, with U.S. Special Representative Zalmay Khalilzad warning that the window to achieve a political settlement will not stay open forever. “Afghans are dying at a high rate, and regional spoilers are using Afghans as cannon fodder for their illegitimate objectives,” he said.

Few expect the situation to change.

At Ali Abad Hospital, just opposite the university’s campus, cars kept pulling up late into the night on Monday. Relatives of those wounded, or killed, piled out. Their faces were stern with worry, their eyes frantically scanning lists of names of those admitted to the clinic, hoping that the morgue wouldn’t be their next stop. 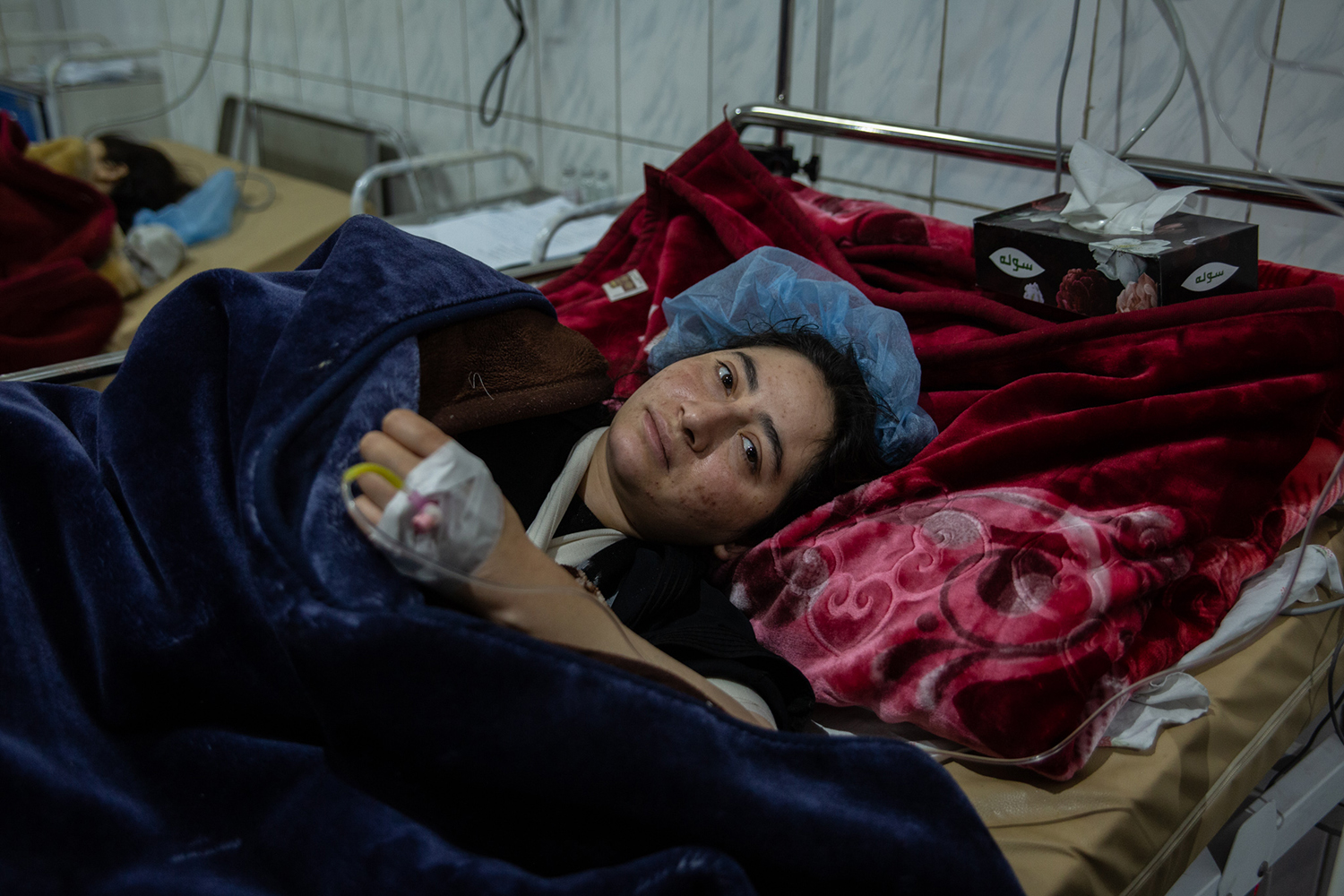 Nahida Muhradi, a 22-year-old law student, rests at Ali Abed hospital in Kabul, where she is recovering from her injuries, on Nov. 2. Stefanie Glinski for Foreign Policy

Nahida Muhradi’s family’s search ended, less awfully than it could have, at Ali Abad. The 22-year-old law student was recovering from a bullet wound to her left leg, sharing her intensive care room with five other women, most of them injured in the attack. Muhradi’s sister got the doctors’ permission to visit; sitting by her bed, the two young women were screaming and crying, holding hands, and touching each other’s faces.

Muhradi said she wasn’t sure if she would look for a way out of her war-torn nation. Akbari, who saw a lot of classmates shot dead, said it’s difficult to see his future in Afghanistan. “Both our government and the international community—including the U.S.—has failed us. It is not even safe anymore to attend university,” he said.

“The terrorists come to kill and injure us. We had hopes, but we are not allowed to hope. All we—our young generation—want is to make Afghanistan great again.”

Afghanistan Is Not Doomed to Repeat Its Past

Peace talks in Afghanistan may come down to an agreement between the Taliban and Kabul on an interim government. Here’s how the sides can avoid the pitfalls of 1992 and 2001.

Afghanistan Is Not Doomed to Repeat Its Past

Peace talks in Afghanistan may come down to an agreement between the Taliban and Kabul on an interim government. Here’s how the sides can avoid the pitfalls of 1992 and 2001.