How Ethiopia Reached the Brink of Civil War

Sudden reforms in the ethno-federal state system have drawn comparisons to the dissolution of Yugoslavia.

Ethiopia Pushed to the Brink of Civil War

As the world waited with bated breath last Wednesday for the results of the U.S. presidential election, Ethiopian Prime Minister Abiy Ahmed sent soldiers to the restive northern Tigray province, alleging that regional troops had attacked a federal military base. The crisis escalated quickly, and heavy casualties have been reported in clashes between the national military and troops loyal to the region’s ruling Tigrayan People’s Liberation Front (TPLF).

On Monday, an Ethiopian military official said the air force was “pounding targets with precision” in Tigray. Tensions between the national and local government in the province have simmered for months, and the conflict risks becoming a full-blown civil war. Here is a quick rundown of how the situation reached this point and why it could be so explosive.

Origins of the crisis. The TPLF dominated Ethiopian national politics for decades: Ethnic Tigrayans, making up around 6 percent of the population, wielded outsize political and economic influence. That ended with the election of Abiy in 2018 after his predecessor resigned. (Abiy belongs to Ethiopia’s largest ethnic group, the Oromo.)

Abiy pursued ambitious reforms, transforming what was one of Africa’s most repressive countries and winning the 2019 Nobel Peace Prize for ending the two-decade conflict with neighboring Eritrea. But the political opening led to a surge in ethno-nationalism, stoking tensions among the leaders of Ethiopia’s states, which are mostly based on ethnic and linguistic divisions.

As Abiy sought to root out corrupt officials, Tigrayan leaders felt they were disproportionately targeted, and the TPLF refused to join Abiy’s multiethnic Prosperity Party.

The tipping point. Tensions between the central government and Tigray intensified after the region held parliamentary elections in September, defying Abiy’s move to postpone legislative elections until next year. Tigrayan officials accused Abiy of using the coronavirus pandemic to mount a power grab. The Tigrayan vote prompted the government to redirect federal funds away from Tigray’s regional leaders and send it instead to local administrators—a move the regional government described as “tantamount to a declaration of war.”

Events came to a head last week as Abiy accused regional leaders in Tigray of attempting to loot the national military’s Northern Command, which is home to half the army’s personnel, and launched a military offensive in response.

Ethiopia’s 10 semi-autonomous regions have their own police and militias, and both the central and regional governments had built up their capacities ahead of last week’s clash, as Tom Gardner wrote in a dispatch for Foreign Policy from Addis Ababa.

Happening now. A communications blackout makes it difficult to get accurate information from on the ground in Tigray. But Reuters reports that hundreds of people have been killed since the offensive began, citing government sources. The TPLF is estimated to have a fighting force of around 250,000 troops and access to significant military hardware—it is unlikely to be easily forced to surrender.

On Monday, Abiy denied that the country was on the brink of civil war. “Concerns that Ethiopia will descend into chaos are unfounded & a result of not understanding our context deeply,” he wrote on Twitter. In an emergency session on Saturday, the upper chamber of the Ethiopian parliament voted to dissolve the leadership of the Tigray region, and on Sunday Abiy appointed new chiefs of the military, intelligence, and Ministry of Foreign Affairs.

What could come next. The sudden liberalization of an ethno-federal state has evoked comparisons to the dissolution of Yugoslavia. Without careful management, Ethiopia is at risk of fracturing along ethnic lines, as Florian Bieber and Wondemagegn Tadesse Goshu wrote for Foreign Policy last year.

The regional leader of Tigray, Debretsion Gebremichael, has called on the African Union to intervene to prevent a civil war. On Saturday, U.N. Secretary-General António Guterres spoke with Abiy and the chair of the African Union and offered U.N. support in resolving the conflict. But prospects for a cease-fire have yet to emerge: The government stepped up its military campaign on Sunday in what Abiy described as a “law enforcement” operation.

Ethnic cleansing looms in Nagorno-Karabakh. Fighting between Armenia and Azerbaijan over the disputed territory of Nagorno-Karabakh took a significant turn on Sunday as Azerbaijan’s president announced that his forces had captured a strategic hilltop town considered critical to exerting military control over the region. After taking Shusha—known as Shushi to Armenians—Azerbaijani forces now have a clear line of fire into the region’s capital, Stepanakert.

Joshua Kucera reports for Foreign Policy that thousands of people are now fleeing the city in anticipation of an assault by Azerbaijan’s forces, which many fear could lead to ethnic cleansing.

Nagorno-Karabakh is internationally recognized as part of Azerbaijan, but it has a largely Armenian population. The countries fought a bitter war over the territory in the early 1990s that left some 20,000 people dead and Armenia victorious. Up to 1 million people were displaced, most of them Azeris. Now the shoe is on the other foot as Azerbaijan’s forces close in. FP’s James Palmer explains the full background to the conflict.

War crimes indictments. The president of Kosovo, Hashim Thaci, resigned on Thursday to face war crimes charges by a special court in The Hague. Within the space of a day, Thaci, a towering figure in Kosovar politics, went from the presidential palace to a custody cell. He made his first appearance in court on Monday, pleading not guilty.

Thaci and other former guerrilla leaders from Kosovo’s war for independence against Serbia in the late 1990s stand accused of participating in the abduction, detention, and murder of perceived traitors and opponents. The preliminary charges against Thaci were announced with dramatic timing in June, two days before he was due to meet his Serbian counterpart, Aleksandar Vucic, at the White House for talks. 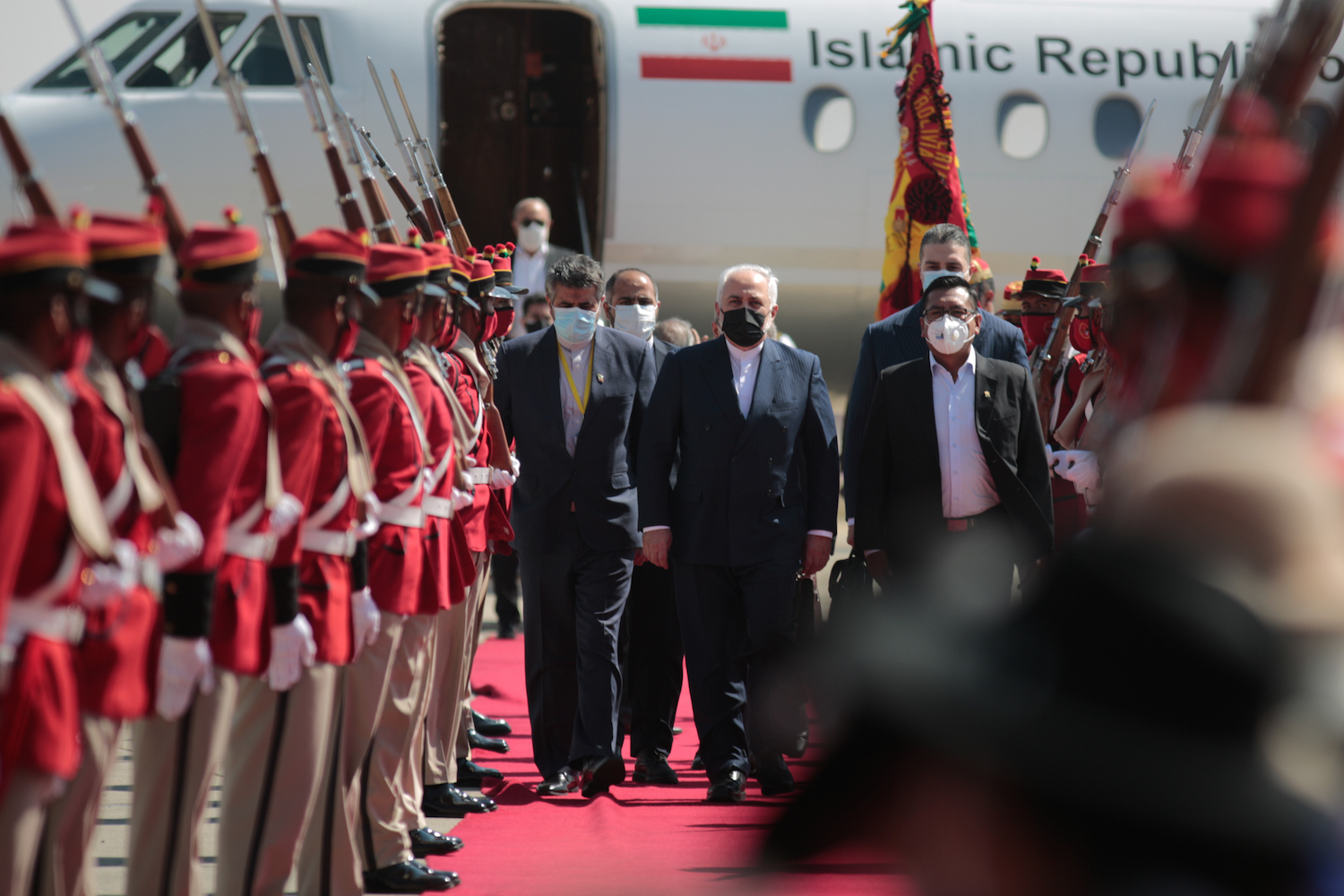 Zarif’s Latin America tour. Iranian Foreign Minister Mohammad Javad Zarif arrived in Venezuela last Wednesday, his first stop in a tour of Latin America that comes as the Trump administration seeks to check Tehran’s influence in the region. United by a common enemy, Iran and Venezuela have grown close as Washington has imposed punishing sanctions on both countries, with Iran sending food and tankers of oil to Venezuela.

Shake-ups in Turkey. Turkish Finance Minister Berat Albayrak announced his resignation on Sunday, one day after the central bank governor was fired, as the country plunges headlong into an economic crisis. The value of the Turkish lira has hit record lows, losing 30 percent of its value against the dollar this year. Albayrak, who is the son-in-law of Turkish President Recep Tayyip Erdogan, officially said he was stepping down for health reasons—but the timing points to a realignment in economic policy.

Some analysts have also speculated as to whether Albayrak’s departure was a response to Joe Biden’s victory in the U.S. presidential election. A friend of Ivanka Trump and Jared Kushner, Albayrak handled the Turkish government’s relationship with the White House and maintained a diplomatic back channel over WhatsApp with Kushner.

Chinese satellites. While a battle over 5G rages on Earth, China sent the world’s first 6G test satellite into orbit last week, although 6G networks are not expected to be commercially available for several years. It was sent into space on Friday, along with 12 other satellites launched from the Taiyuan Satellite Launch Center in the Shanxi province.

China has invested heavily in its space program, seeking to rival the United States. So far this year, China has sent more satellites into space than any other country.

This profile in the Guardian explores how Mahuta’s appointment could pave the way for New Zealand to take a more indigenous-influenced approach to its foreign affairs.

NEW FOR SUBSCRIBERS: Want to read more on this topic or region? Click + to receive email alerts when new stories are published on Military, Africa