While Biden Calls the Real World, Trump and Allies Create Another

Mike Pompeo is the latest Republican official to indulge the president after his election loss.

Pompeo Adds to Myth That Trump Is Staying Put

Pompeo Adds to Myth That Trump Is Staying Put

One week after an election that confirmed Donald Trump as a one-term president, he and his allies continue to operate as if his next four years in office are right around the corner.

Asked on Tuesday about when the State Department would begin cooperating with the Biden transition team, U.S. Secretary of State Mike Pompeo deflected, saying “there will be a smooth transition to a second Trump administration.”

Although delivered with the hint of a smile, it wasn’t immediately clear whether the secretary meant the comment as a joke, and a State Department spokesperson declined to clarify afterward. In interviews with conservative news outlets following the press conference, Pompeo seemed more willing to acknowledge that a Biden presidency was within the realm of possibility, while still not confirming his position either way.

Even as Trump’s better-than-expected election performance means Trumpism is here to stay, a majority of Americans think it is time for him to go. A Reuters/Ipsos poll released on Tuesday found that 79 percent of Americans believe Joe Biden won last Tuesday’s election, 18 percent are either undecided or don’t know, and 3 percent believe that Trump was the winner.

UN-ambiguous. Despite Biden’s victory and the flood of congratulations Biden has received from most (but not all) world leaders in recent days, a nervous air of confusion persists. A spokesperson for U.N. Secretary General António Guterres was forced to explain a tweet sent from Guterres’s account congratulating “the President-elect & Vice President-elect” in the U.S. election—without naming any names—was indeed meant for Joe Biden and Kamala Harris.

Although the Biden campaign declined to announce the order in which each leader was called, the very fact of the Johnson call, FP’s Chloe Hadavas writes, means that not all Trump allies are willing to live in the fantasy world the current president is creating. 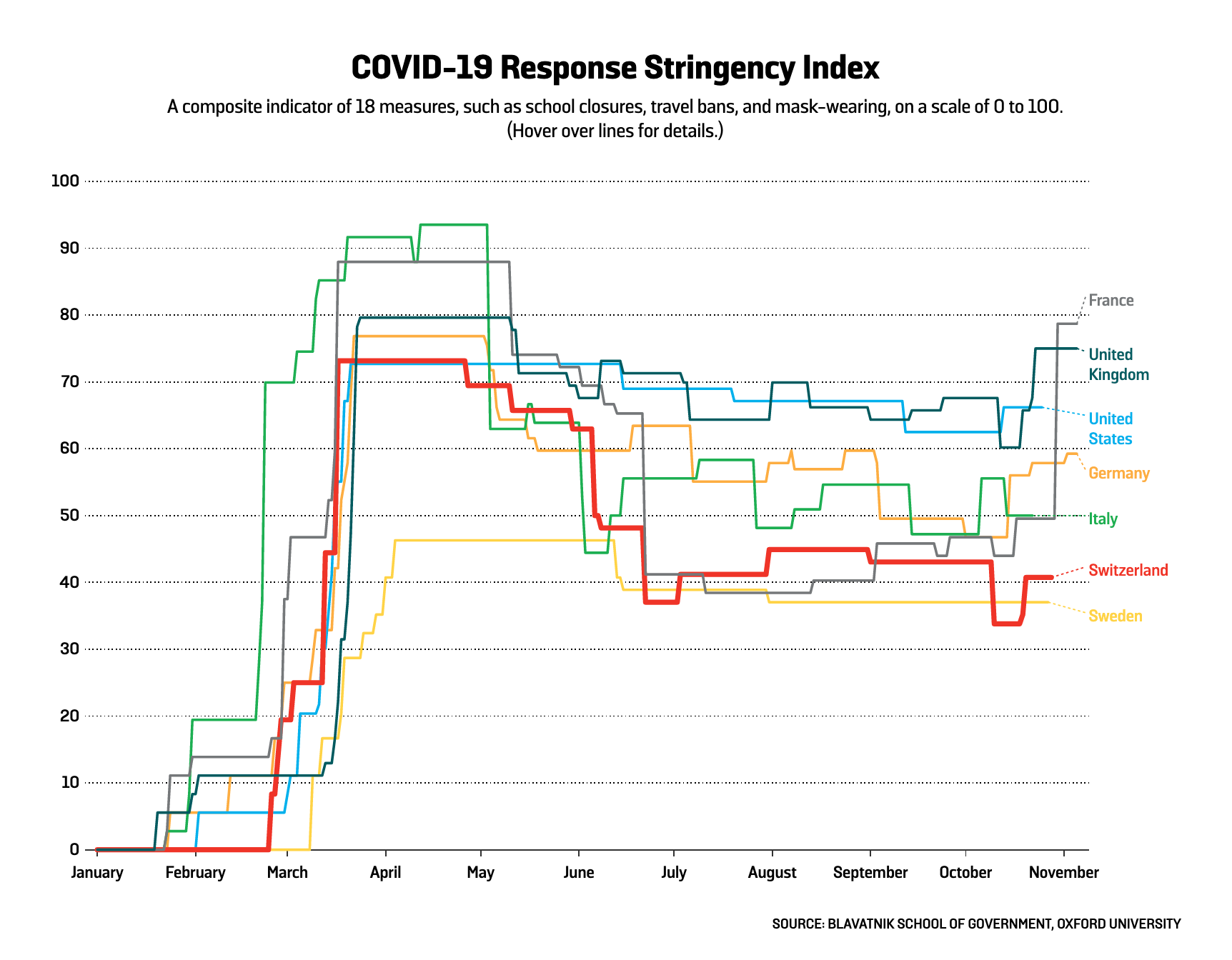 Long considered a shelter from war—and taxes—Switzerland is clearly not a safe haven from COVID-19. The country has overtaken Belgium and is set to leapfrog the Czech Republic as Europe’s top coronavirus hot spot. As the graphic above illustrates, new research by Oxford University’s Blavatnik School of Government shows that Switzerland’s anti-coronavirus measures are still “much looser than in the rest of Europe and the United States—and only slightly more restrictive than in Sweden.” For more on how Switzerland has approached its coronavirus response, read the Joseph de Weck’s recent article “Switzerland is Choosing Austerity Over Life.”

Ethiopia’s civil conflict continues. At least 2,500 Ethiopians have fled into neighboring Sudan, with thousands more expected to follow, as conflict in the Tigray region continues. Ethiopian state-affiliated media reported that federal forces have killed 550 Tigray “extremists” in fighting that included air strikes from the country’s air force. On Tuesday, Tigray regional leader Debretsion Gebremichael said that Eritrean forces had moved into Tigray on the side of Ethiopian federal troops, a claim Eritrea’s foreign minister has denied.

Record COVID hospitalizations. The United States is dealing with a record number of coronavirus-related hospitalizations as cases surge across the country. According to figures compiled by the COVID Tracking Project, just under 62,000 people are currently in hospital receiving treatment for COVID-19. The United States has seen an explosion in the number of cases for the month of November so far, with more than 100,000 new cases reported daily on all but the first three days of the month.

Brazil ends Chinese vaccine trial. Politics appears to be getting in the way of Brazil’s coronavirus vaccine trials, after the country’s health authority suspended testing of a Chinese-made vaccine citing a “serious adverse event,” despite such a claim being disputed by the vaccine’s research team.

The trial’s abrupt end appears to be related to a feud between Brazilian President Jair Bolsonaro and Sao Paulo Governor João Doria, who is expected to run against the president in the 2022 elections. Doria has backed the Chinese-made vaccine to be used in his state, while Bolsonaro favors one being developed by Oxford University and AstraZeneca. “Death, disablement, anomalies … this is the vaccine that Doria wants to force people in São Paulo to take,” Bolsonaro wrote in a Facebook post.

Generation COVID. A report from the British school inspection agency found that children had suffered from being outside the regular school system during lockdown, with some younger children regressing from being potty-trained back to diapers and older children showing reduced reading stamina. The chief inspector for schools found that the children experiencing the worst effects were those whose parents’ employment did not allow for flexible or at-home working.

Britain’s border problem with Biden. During a his first call with British Prime Minister Boris Johnson as the U.S. President-elect, Joe Biden underlined the importance of upholding the Good Friday peace agreement in any Brexit deal, foreshadowing possible friction ahead in any future U.S.-U.K trade deal. Biden’s mention of the Good Friday Agreement, which didn’t figure on the initial readout published by the British side, was later confirmed by a Downing Street spokesperson. Biden has already upset some British conservatives after he joked with a BBC reporter that his Irish heritage prevented him from speaking with the British broadcaster.

Iran sanctions continue. The Trump administration doesn’t intend to give up its “maximum pressure” campaign on Iran just because it lost an election. On Tuesday, the U.S. Treasury Department announced new sanctions on six companies and four people accused of supplying components to Iran Communication Industries, a company run by the Iranian military that is already under U.S. and EU sanctions. Treasury Secretary Steve Mnuchin said the United States would continue to take action against those that support Iran’s “militarization and proliferation efforts.”

Those looking for a V-shaped economic recovery in China will have more data to pore over once Singles’ Day, happening today, concludes. A Chinese version of the U.S. Black Friday, the event is considered the biggest shopping day in the world and e-commerce giant Alibaba has reported over $56 billion in orders as of Wednesday morning. It’s not clear whether it will be enough to jumpstart China’s lagging retail figures: Although China’s GDP growth is returning to normal levels, retail sales are down 7 percent overall from the same period last year.