The Coronavirus Is Now Another Risk of U.S. Migration

At least 2,500 Mexicans in the United States, many of them essential workers, have died from COVID-19. Back home in Mexico, their grieving families are left without support.

TLAPA DE COMONFORT, Mexico—When Claudio Ortega Maldonado was 17, he left his home in the mountains of Guerrero, never to return. Ortega knew what awaited him if he stayed: He grew up in poverty in a family of seasonal farmers and began working as a child. He hoped to offer his parents and 11 siblings a better life with the money he sent home from New York City, and to build a house in Mexico that he could eventually return to. After 13 years away, he wanted to surprise his family and come home on Mother’s Day this year. Instead, Ortega died of the coronavirus on April 22 in a Brooklyn hospital at the age of 29.

In New York, Ortega had quickly landed a job as a cook, though he was undocumented. He worked 10-hour shifts six days a week, earning $3,000 a month—and sending $450 each month to his family. He sent presents for his siblings such as clothes and shoes and kept a close eye on his parents’ well-being. Every payday, he would buy a lottery ticket, dreaming of buying his parents a house in Mexico City and returning home to sell produce. Ortega, more than 2,100 miles away, was his family’s main provider.

Despite the ongoing health and economic crisis, Mexican workers in the United States have so far sent record remittances home this year. In March, as the pandemic gathered force, they sent home around $4 billion—36 percent more than in the same period in 2019. Mexican President Andrés Manuel López Obrador has estimated that total remittances to Mexico will reach $40 billion by the end of the year, defying economists’ forecasts. The World Bank projects a drop in global remittances, in part because of weak economic growth and employment levels in immigrant-hosting countries.

As of June, more than 2,500 Mexicans in the United States, many of them essential workers, had died from COVID-19, according to Mexico’s foreign ministry. For people such as Ortega, the opportunity to break the cycle of poverty outweighs the dangers of crossing the border. But the coronavirus pandemic has compounded these risks and exposed the hidden cost of migration for families who rely on relatives in the United States to put a roof over their head and food on the table. As COVID-19 surges again, families in Mexico face the question of whether migration is worth it. 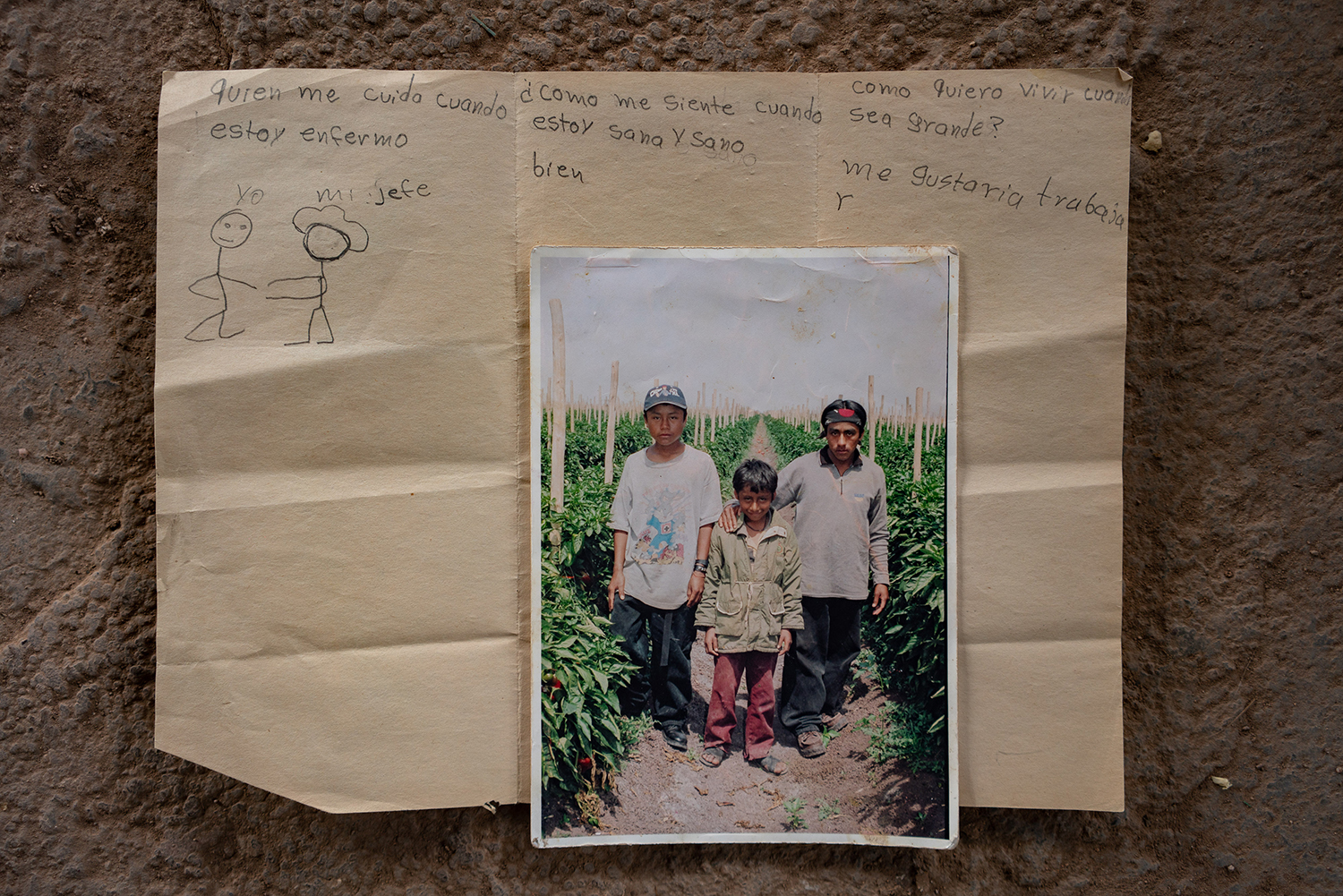 A drawing by Claudio when he was a child, made on one of his yearly trips with family to the fields in the state of Sinaloa, northern Mexico, where he labored as a seasonal worker. He wrote, “Who takes care of me when I am sick?” Claudio drew himself and his father. “How do I feel when I am healthy? Good. How do I want to live when I grow up? I would like to work.” Claudio is seen in the center with his family years later during a similar seasonal work trip. 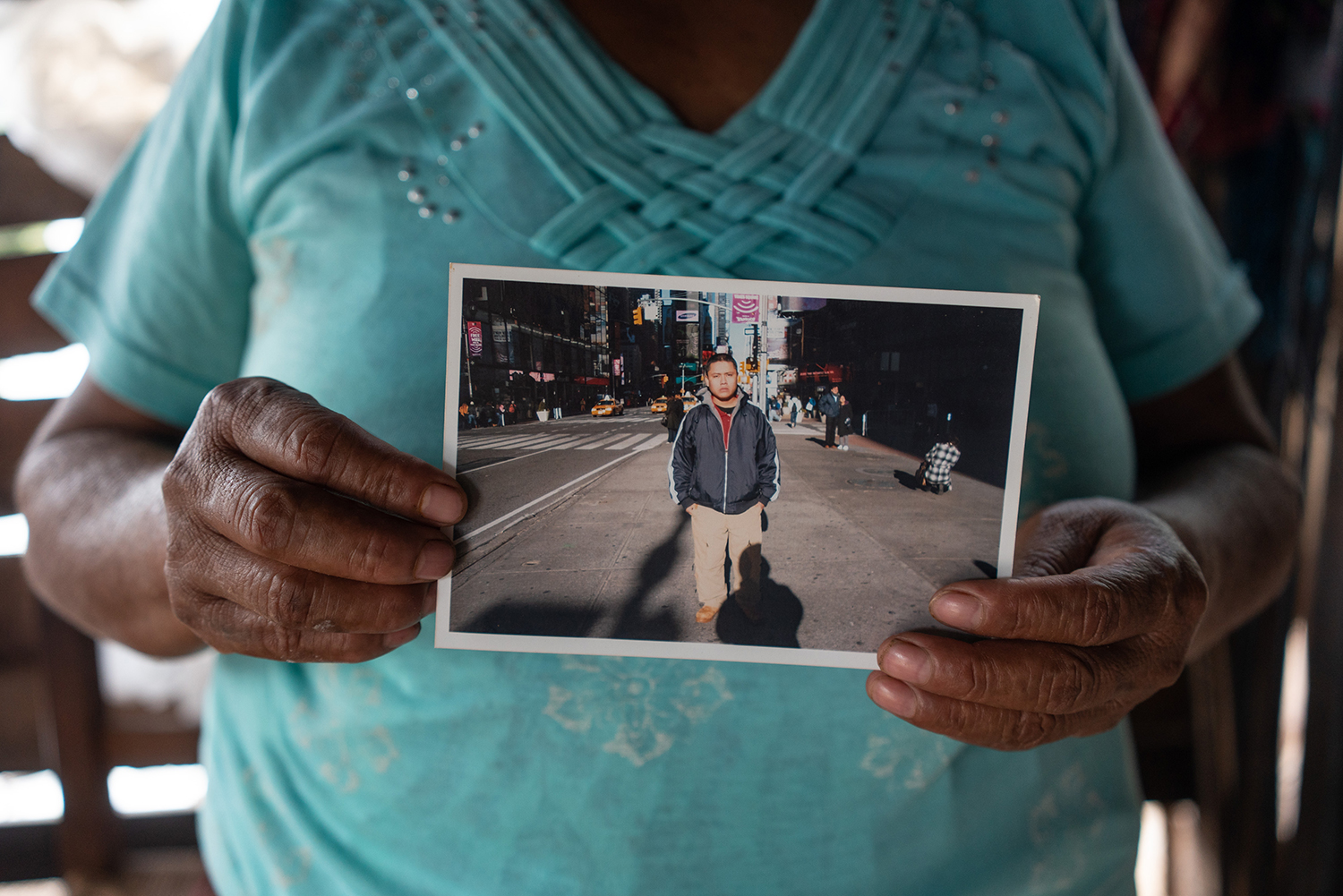 Juana Maldonado holds her favorite photo of Claudio on the streets of New York.

On both sides of the U.S.-Mexico border, migration to the United States is intertwined with myths, from the American dream to the idea that undocumented immigrants are coming to steal U.S. jobs. In recent years, more migrants returned to Mexico from the United States than migrated there, largely to reunite with their families—a trend that precedes the Trump administration.

Of course, the Trump administration has made it harder for immigrants and asylum-seekers to reach the United States. Trump has succeeded in cutting both legal immigration and the number of immigrants that reach the U.S. southern border, with the help of Mexican authorities. This year, the number of migrants arrested at the U.S.-Mexico border increased sharply amid the economic downturn in Mexico.

For most Mexicans, migration to the United States is still a privilege—even for those who endanger their lives in the journey. Some people migrate to other parts of Mexico, driven by the lack of economic opportunities. For them, the American dream remains a mirage.

Ortega’s hometown of Tlapa de Comonfort serves as a commercial hub for the remote towns in the surrounding mountains, home to predominantly Indigenous communities. Guerrero is one of the most underdeveloped states in Mexico, and its mountain region has for decades been among the poorest. Two-thirds of the population lives in poverty, with many relying on subsistence farming due to a lack of job opportunities and low wages. Guerrero ranks low on access to health services, education, food security, and basic services—indicators that have remained stagnant or even declined over the last decade. 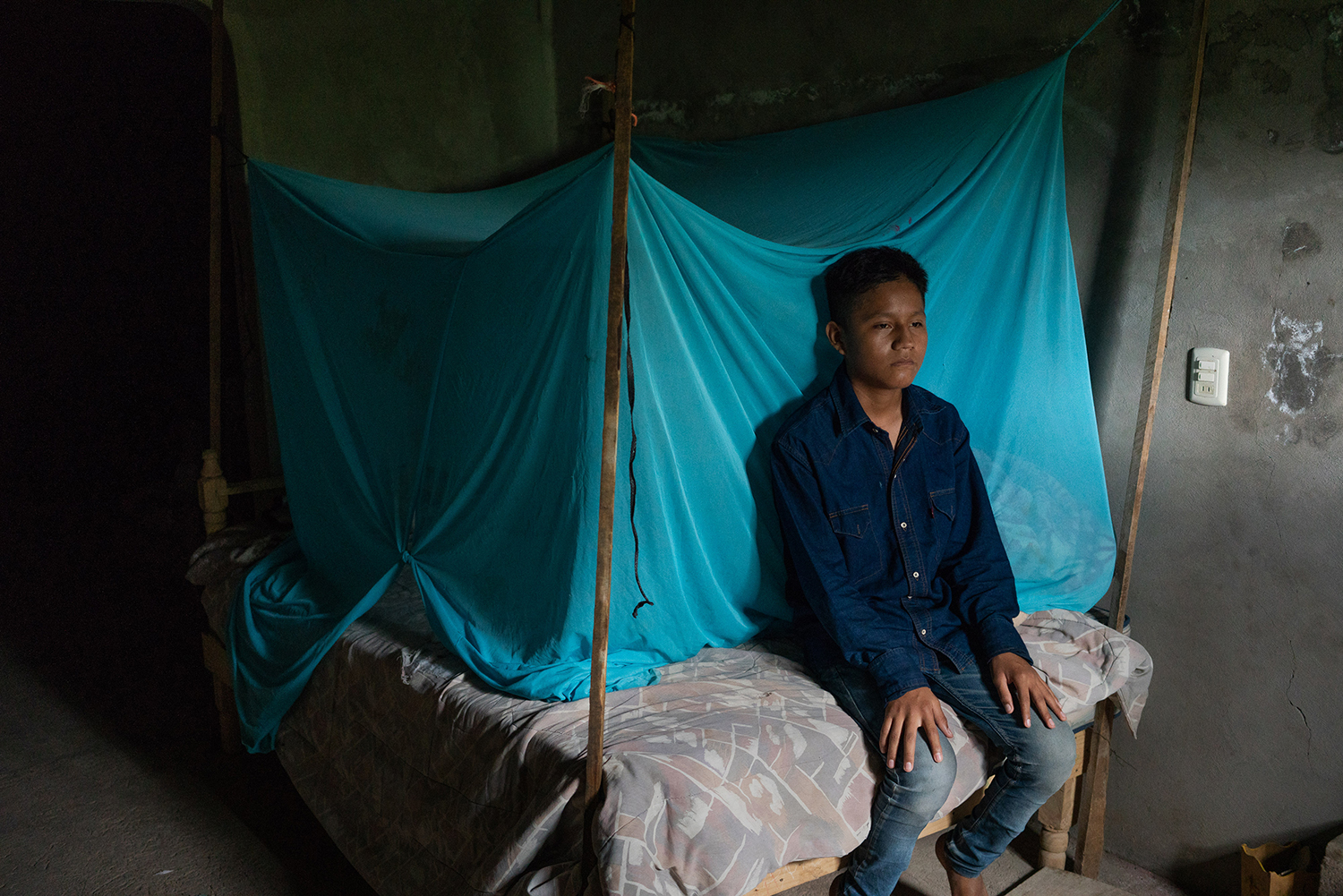 Oswaldo Ortega Maldonado, 14, sits on Aug. 25 in the room that his father reserved for his brother Claudio to use when he returned to Tlapa from the United States. No one slept there for months, the family said. 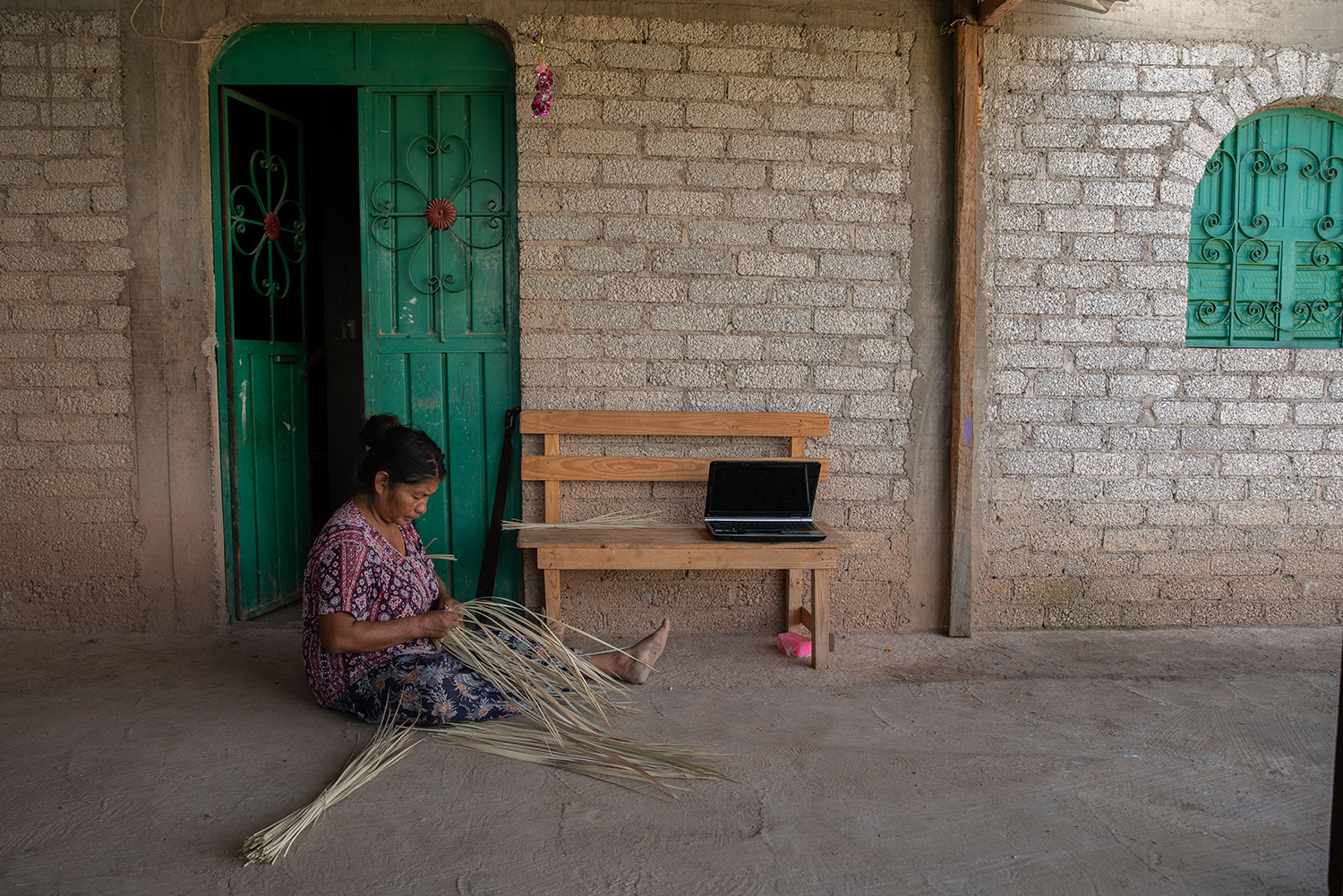 Juana Maldonado makes a palm hat outside her home in Tlapa on Aug. 29.

In the mountains, work is arduous and scarce. Some turn to growing poppies—a lucrative business for cartels, but not for the small farmer. Others come up with the money to pay for a smuggler to migrate to the United States, and those who do manage to cross the border shape the local economy in Tlapa. Money transfer centers, stores with Nike knockoffs, family-owned international delivery services, and even New York-style pizzerias dot the town’s streets.

The two-story cinderblock house that Ortega’s family built with his remittances sits on a hill overlooking Tlapa, a source of pride for the family. Structures built with remittance money are a familiar symbol—they stand out like sore thumbs from the mountain’s green foliage. It can take years for families to build a house: Immigrants must first pay off their debt to a smuggler, on top of living expenses, before they can start sending remittances to their families.

In the mountains, the money means farmers can afford fertilizer to work their land, children receive an education, and people get access to health care and basic services. “Remittances are the family’s fund with which they pay for medicine, fertilizers, school supplies, uniforms,” said Abel Barrera, the founder of Tlachinollan, a human rights organization serving Guerrero’s mountain region. “There’s no paid labor in the communities, so people must leave.”

Lack of opportunity and the absence of state policies to stimulate the region prompted Ortega to migrate, and they also kept him from coming back. “You can’t ask a migrant to develop the region with their remittances,” Barrera said. “They send their $300 a month and that’s the extent of it. The state needs to step in.”

Ortega’s labor in the United States was not enough to lift his family out of poverty, only to alleviate it. When Ortega passed away, his family couldn’t afford to pay for his funeral expenses. It was only thanks to a co-worker and close friend of Ortega’s, Luis Santiago Reyes, that his remains weren’t buried in a mass grave in New York. 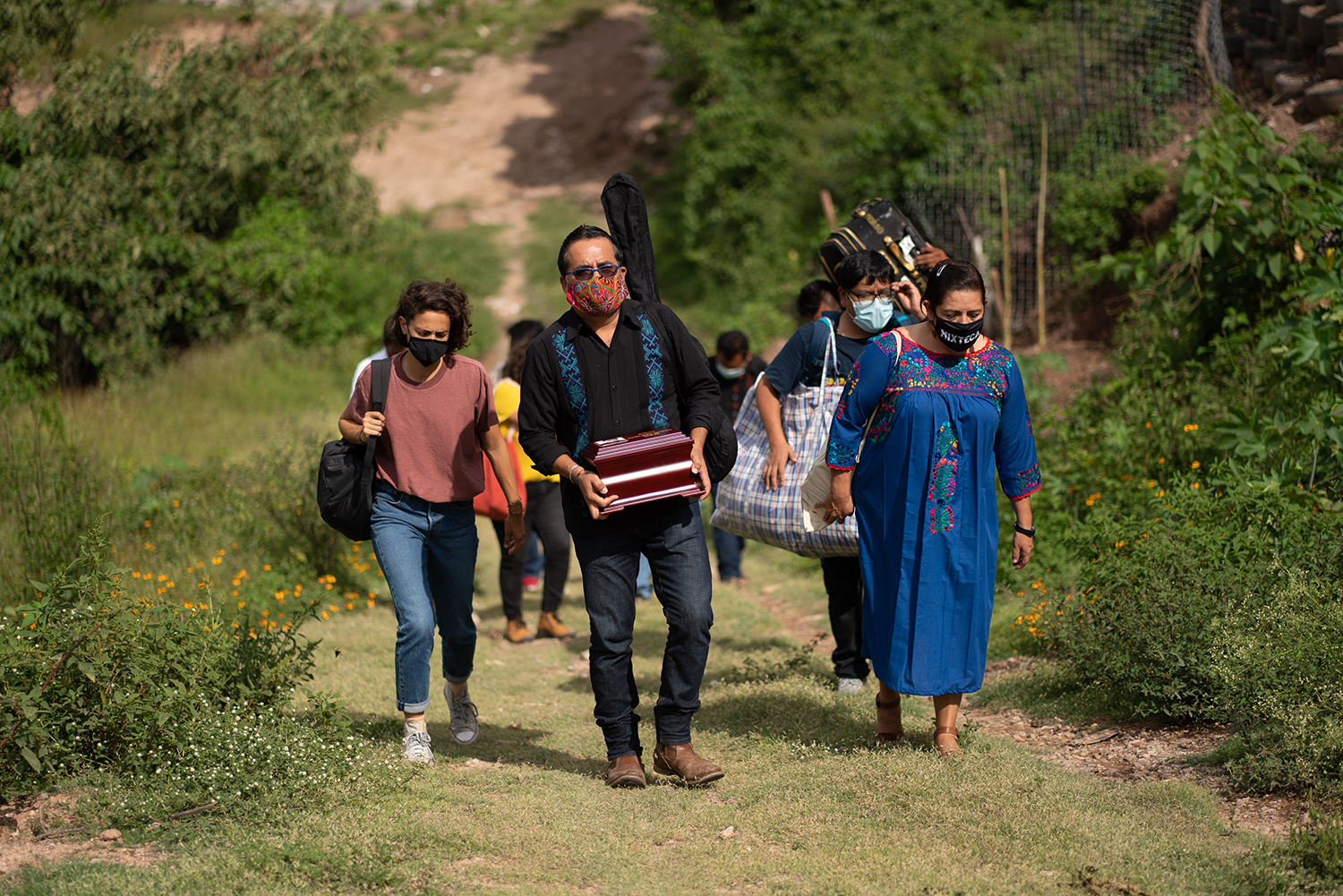 Juan Carlos Ruiz, the pastor of the Lutheran Church of the Good Shepherd, carries Claudio’s ashes in Tlapa on Sept. 27. The pastor carried Claudio’s remains from New York to Mexico to deliver them to Claudio’s family. 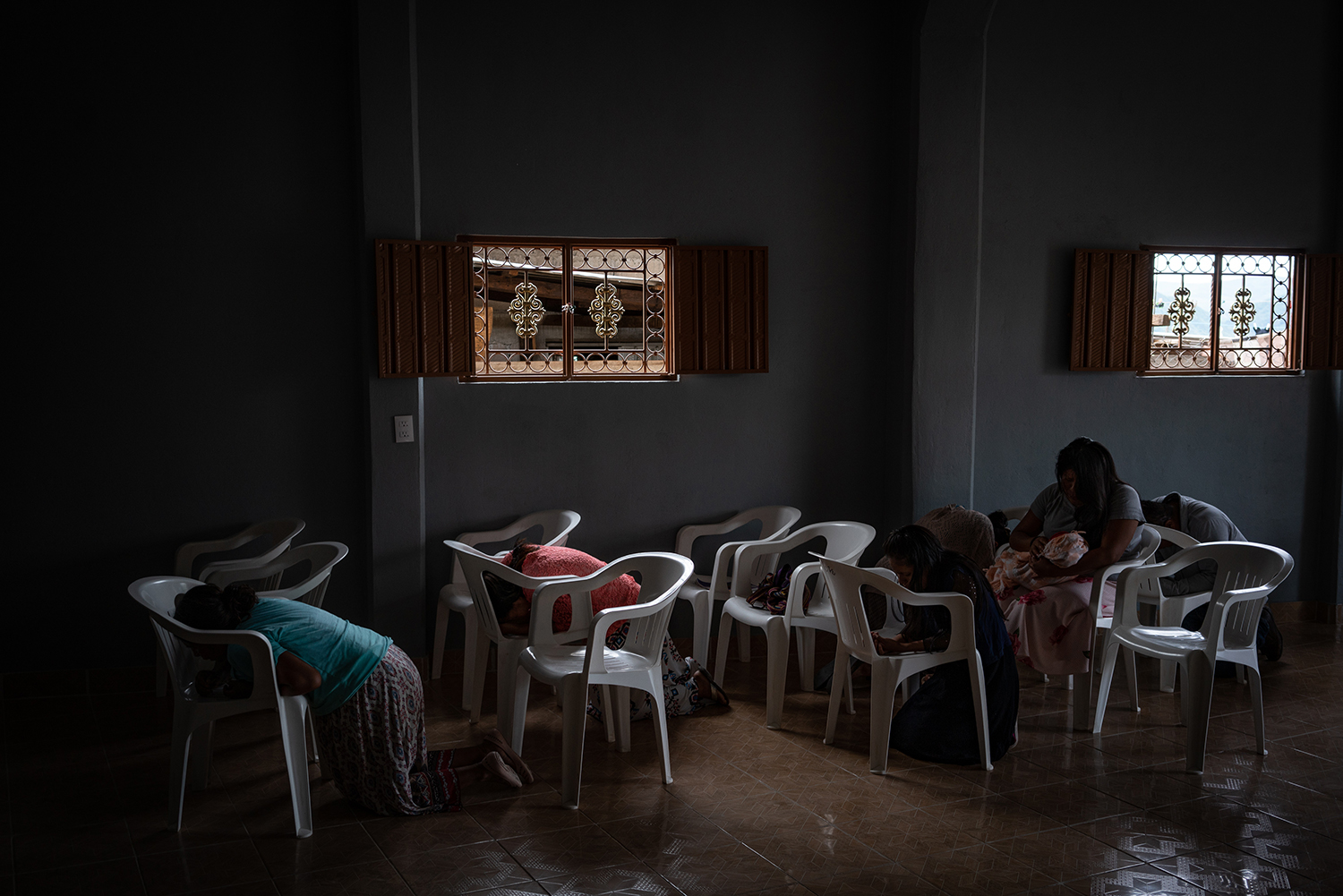 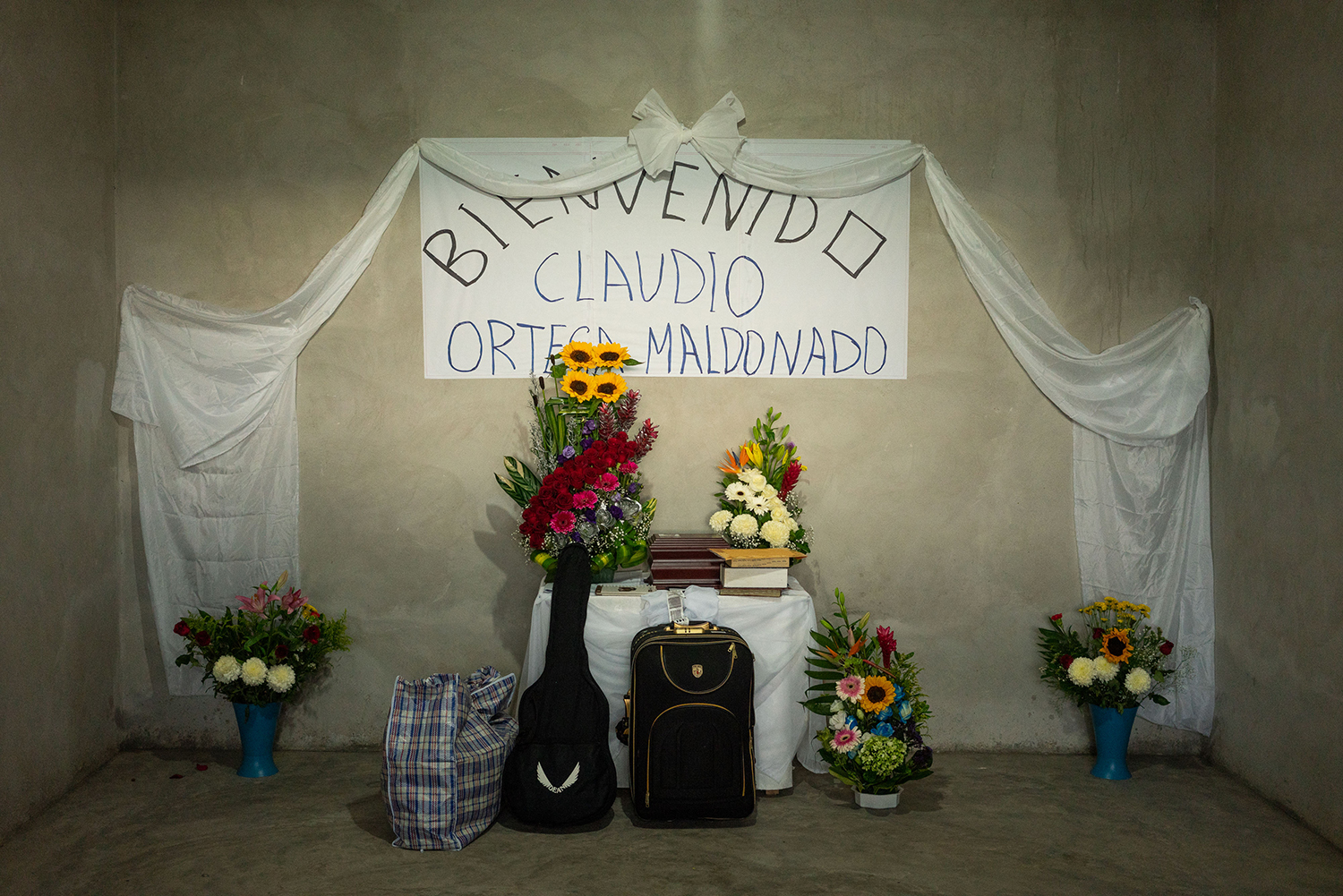 An altar for Claudio features his guitar and suitcase during a service for him in Tlapa on Sept. 27.

When Juana Maldonado found out her son had died, she couldn’t eat for days. They were particularly close and spoke on the phone every Tuesday. “I told him it was time for him to return and let us take care of him,” Juana said in her native Mixtec. But Ortega kept pushing back his return date. He wanted to return to the house he provided, but worried about what Tlapa  couldn’t offer him.

Ortega began to feel ill in early March and feared the worst. He spoke with his parents a few times, but they didn’t think it could be COVID-19. Reyes urged him to go to the hospital, as he was diabetic and at elevated risk for complications. “He didn’t want to go to the hospital because he didn’t want to die here,” Reyes said. By the time Ortega arrived at the hospital on April 5, he had trouble breathing. He fell into a coma and died two weeks later. His ashes arrived on a Sunday at the end of October, along with his guitar, some clothes, and $820 that Reyes raised to help the family.

New York City is home to many immigrants from towns such as Tlapa, with families who rely heavily on them. Throughout the pandemic, many have continued working in construction, agriculture, and the service industry. As Mexico suffers its worst recession in nearly a century, their need to work to support their families puts them at higher risk of contracting COVID-19. The coronavirus has disproportionately affected Latinos in the United States—in part because of many Latinos’ high-risk jobs, crowded living conditions, and limited access to health care. Adjusted for age, the mortality rate among Latino residents of New York state is among the highest in the United States.

These disparities set a worrisome precedent as the winter approaches and cases spike across the United States. On Nov. 13, new COVID-19 cases and hospitalizations reached a record high in the United States, and New York has imposed a new round of social distancing restrictions, closing gyms, bars, and restaurants at 10 p.m.

In Mexico, the pandemic has also had disproportionate effects in low-income communities and taken an economic toll. More than 40 percent of Mexico’s population lives below the poverty line and 7 percent live in extreme poverty. The pandemic, which threatens to increase global extreme poverty by 2021, further narrows people’s options. Between the increasing challenges of migration to the United States and the dwindling opportunities in Mexico, families like Ortega’s find themselves between a rock and a hard place. 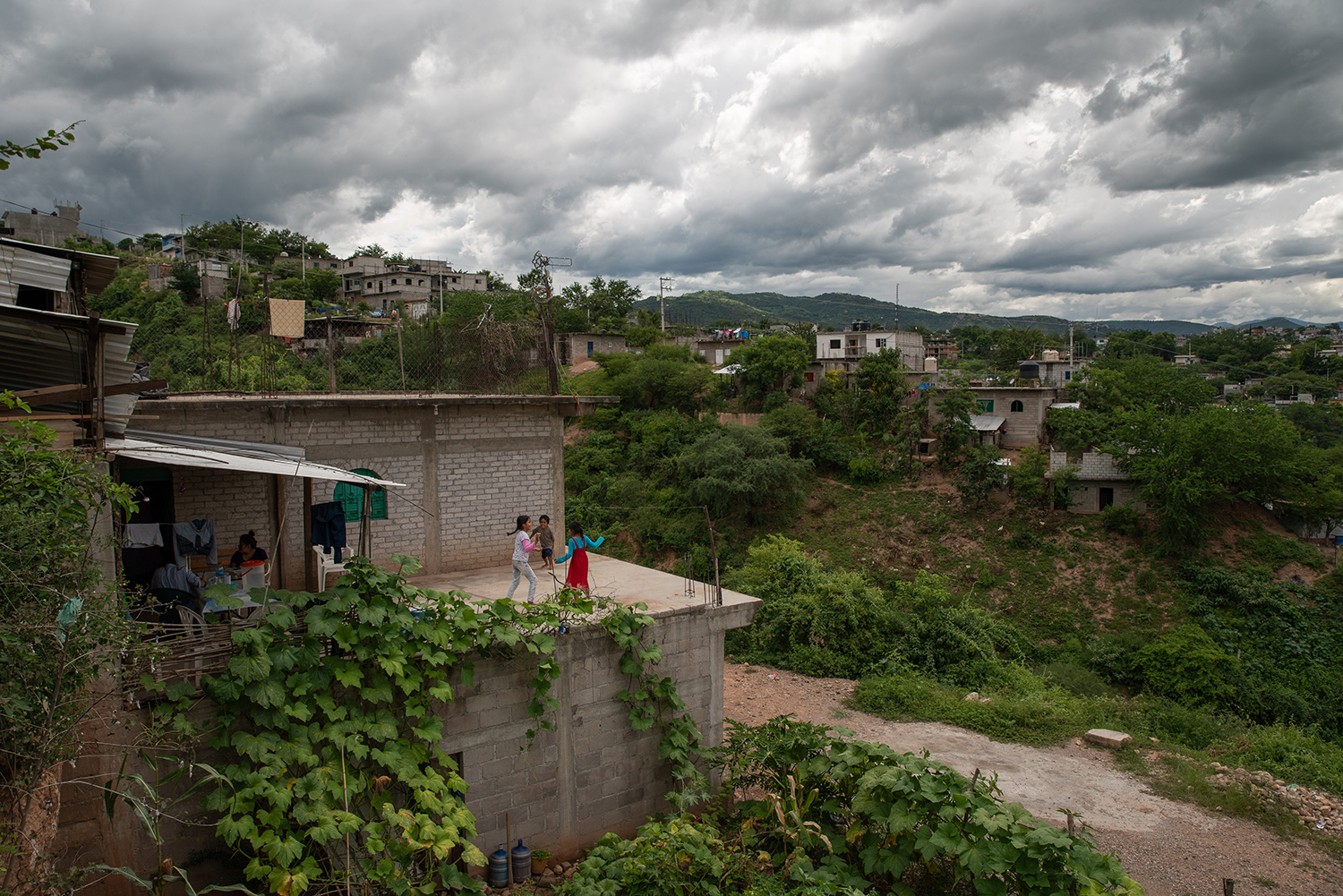 Claudio’s sister and nephews play on the roof of their cinderblock house in Tlapa on Aug. 29.

Ortega’s return was uncertain and the stakes were high, but his family always felt his absence strongly. The siblings he helped provide for grew up without him. They have found some peace in having Claudio’s remains back with them in Mexico, after a traditional funeral. His father, Dionicio Ortega, wants to keep his ashes in the room where his son intended to live one day.

The family’s grief is now mixed with their anxiety about the future. Juana and Dionicio are considering migrating again. Their options are limited: They can either return to the fields in northern Mexico with their children and grandchildren, or one of their older children can attempt to migrate to the United States.

Claudio would often tell his mother that the remittances were intended to ease the family’s suffering and keep them from laboring in the fields. But Juana said she would give it all up to have him with them today. “Claudio’s death is the hardest thing we have gone through,” she said. “He was our strength. Now we have to live waiting for a call that will never come.”

This story was made possible with support from the National Geographic Foundation.

Lorena Ríos is a multimedia journalist based in Mexico City. Twitter: @riostlorena