Studies suggest heightened risks from pollution are common in major cities in Bangladesh, India, and Pakistan.

Governments across South Asia seem to be giving up on coronavirus lockdowns. Amid the Hindu holiday season—more than 1 billion Indians marked Diwali last weekend—people are increasingly going about their lives as if the worst of the pandemic is over. As shown below, South Asia’s countries seem to have slowed their rates of COVID-19 transmission.

But the data doesn’t tell the full story or show the extent to which South Asia may be in trouble in the months ahead. Testing rates remain worryingly low. Among the 30 countries with the world’s most coronavirus cases, Bangladesh has the lowest rate of testing, with only 15,769 tests conducted per million citizens. Pakistan performs only slightly better.

The reality is that far greater numbers of people have been infected with COVID-19 than data can capture. In India, for example, estimates suggest that as many as 200 million people have had undetected infections, a figure nearly 10 times higher than the official data.

Deadly combination? The onset of winter—and the accompanying rise in pollution—makes for a worrying next few months. Cities such as New Delhi and Lahore, Pakistan, were enveloped in smog this week. That often happens around this time of year, when farmers burn stubble to prepare for a new planting season and a combination of colder temperatures, humidity, and wind leads to the suspension of particulate matter across the region.

With increased levels of smog, the air in New Delhi, already the city with the world’s worst pollution, often becomes unbreathable, causing asthma, eye and nose infections, and lung diseases. Now the question is how these conditions will affect the ongoing pandemic. Worsening air quality makes indoor gatherings more likely, which could lead to more rapid spread of the coronavirus. And people with throat infections due to the air quality may easily confuse their symptoms with COVID-19, clogging up testing or hospital capacity.

Some studies show that pollution can also increase the chances of catching the coronavirus—or dying from it. A study by scientists in Europe found that particulate air pollution, the kind found across South Asia, resulted in a 15 percent increase in the worldwide deaths from COVID-19.

Don’t ease up restrictions. The Institute for Health Metrics and Evaluation at the University of Washington projected how mask-wearing could affect India’s coronavirus cases, and the results are stunning. If everyone wears a mask, an estimated 251,000 Indians will be infected daily by Dec. 31. If not, that number could rise to 611,000 infections daily—the vast majority undetected.

Malabar naval exercises. Australia, India, Japan, and the United States held joint naval drills in the northern Arabian Sea on Tuesday, just two weeks after the first phase of the group’s military exercises in the Bay of Bengal. The drills mark the first time Australia has participated since 2007. While the exercises are not formally part of the so-called Quad between the four countries, the growing ties speak to a new form of multilateralism.

As the Economist put it this week, “the Quad embodies the grammar of modern diplomacy. It is a compact bloc, rather than a sprawling multilateral organisation; it has a broad agenda, from investment to cybersecurity; and it is suitably elastic, opportunistically embracing New Zealand, South Korea and Vietnam during the early weeks of the pandemic to discuss economic recovery.”

Khan visits Afghanistan. Pakistani Prime Minister Imran Khan made his first official trip to Kabul on Thursday, in what Afghan President Ashraf Ghani called a “historic” visit. Islamabad has played an important role in bringing the Taliban to the table in talks between Kabul and Washington. But neither Khan nor Ghani addressed the Trump administration’s plans to speed up a withdrawal of U.S. troops from Afghanistan, announced this week.

For more, read Foreign Policy’s reporting on the issue:

Pakistan’s India allegation. On Saturday, Pakistan’s foreign minister and military spokesperson held an unusual press conference alleging that New Delhi was sponsoring terrorism against Pakistan. Foreign Minister Shah Mahmood Qureshi said Islamabad would send evidence to the United Nations for adjudication. Among the proof displayed was an audio clip of a conversation between an alleged Indian intelligence official and the leader of a separatist insurgency in Pakistan. New Delhi has not formally responded.

The world’s largest trading bloc. Fifteen countries in Asia have signed a pact to form the Regional Comprehensive Economic Partnership, covering one-third of the global economy. The partnership is expected to eliminate many tariffs among members, increasing trade ties and changing global supply chains. India, Asia’s third-largest economy, opted to stay out of the partnership.

Harley-Davidson’s exit. Indian dealers for Harley-Davidson are exploring legal action against the iconic American motorbike company after it announced it was exiting the Indian market. As the New York Times reports, Harley-Davidson only sold 2,470 bikes in India in the 12 months preceding March.

Last weekend was Diwali, the Hindu festival of lights. For families separated by the coronavirus pandemic, the festival was bittersweet. The period is usually one when families congregate, share feasts, and celebrate together. But many Indians thronged crowded markets, malls, and temples anyway, potentially increasing the chances of greater spread of the coronavirus. 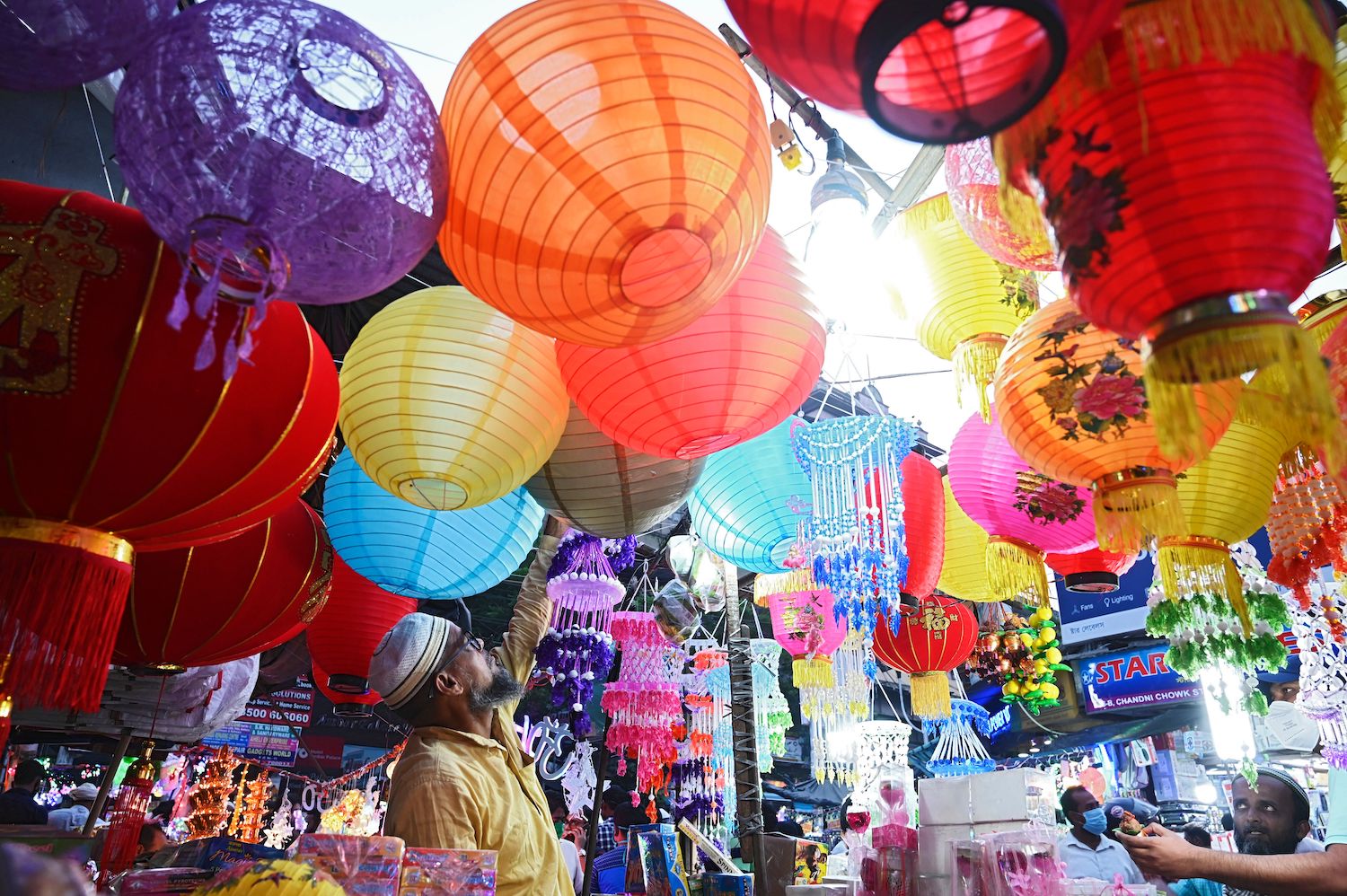 A shopkeeper arranges lanterns at a roadside market ahead of the Hindu festival Diwali, the festival of lights, in Kolkata on Nov. 7.

A shopkeeper arranges lanterns at a roadside market ahead of the Hindu festival Diwali, the festival of lights, in Kolkata on Nov. 7.DIBYANGSHU SARKAR/AFP via Getty Images