For Armenians Fleeing Nagorno-Karabakh, ‘Losing It Is Everything’

After a bitter peace ended six weeks of war, Armenians torched their houses, slaughtered their animals, and wondered what would come next.

Armenians pack their belongings while leaving their house in the town of Kalbajar, one of the seven districts to be transferred to Azerbaijan as part of a deal on Nagorno-Karabakh, on Nov. 12. ALEXANDER NEMENOV/AFP via Getty Images

KALBAJAR, Azerbaijan—As a steady stream of cars piled high with belongings waited in long queues to exit Nagorno-Karabakh after six weeks of bitter fighting, a truck struggled past. It was burdened with an entire shop on top, corrugated roof intact and wires protruding from the side, lifted wholesale from where it stood, still unsure where it would end up.

People who could not afford to transport their livestock simply killed them, beheading chickens and gutting horses, the hot steam rising through the cold air. Others walked their herds for miles along narrow mountain roads, hoping they would not succumb to exhaustion or an oncoming car. 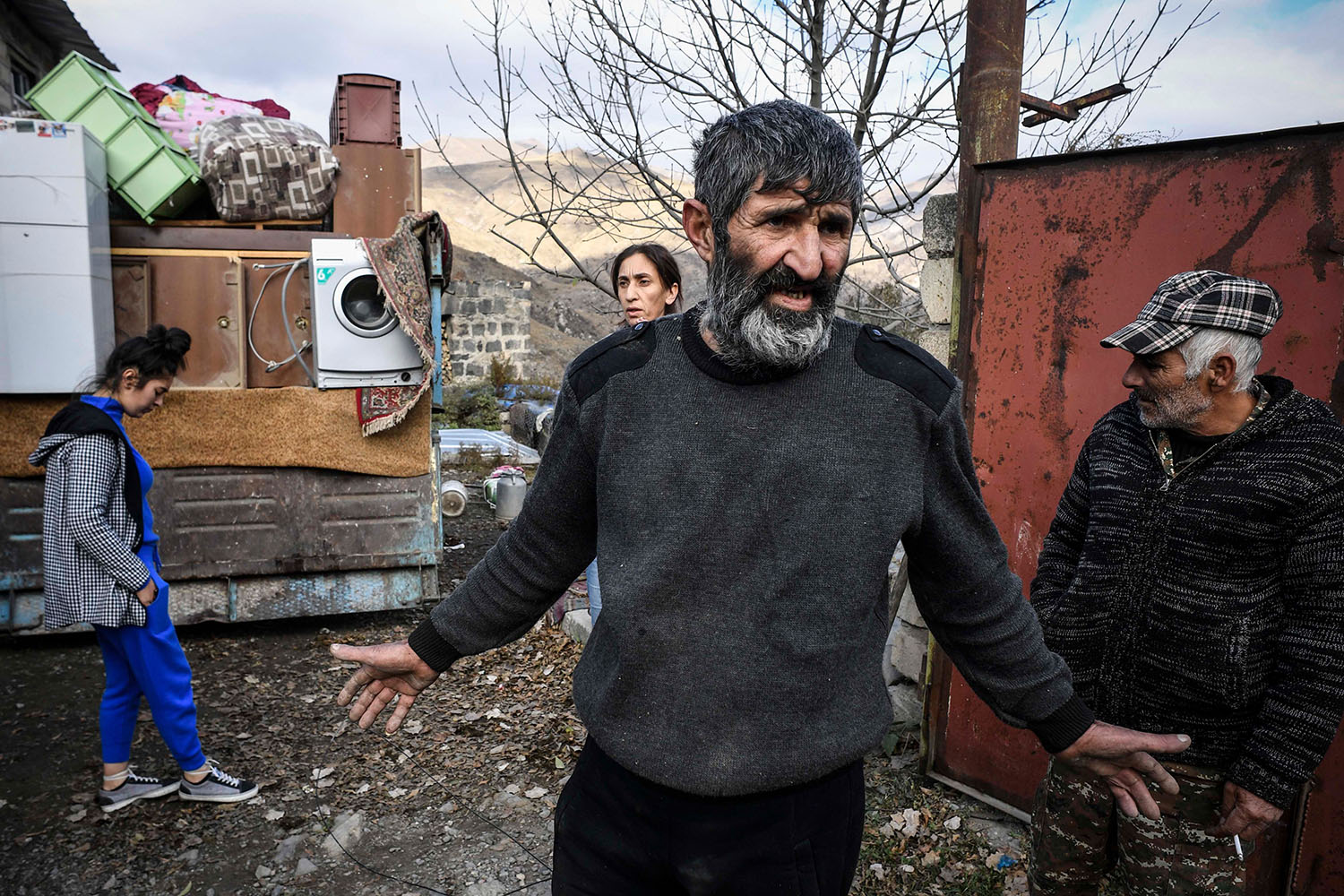 Armenians pack their belongings while leaving their house in the town of Kalbajar, one of the seven districts to be transferred to Azerbaijan as part of a deal on Nagorno-Karabakh, on Nov. 12. ALEXANDER NEMENOV/AFP via Getty Images

KALBAJAR, Azerbaijan—As a steady stream of cars piled high with belongings waited in long queues to exit Nagorno-Karabakh after six weeks of bitter fighting, a truck struggled past. It was burdened with an entire shop on top, corrugated roof intact and wires protruding from the side, lifted wholesale from where it stood, still unsure where it would end up.

People who could not afford to transport their livestock simply killed them, beheading chickens and gutting horses, the hot steam rising through the cold air. Others walked their herds for miles along narrow mountain roads, hoping they would not succumb to exhaustion or an oncoming car.

This was the tragic face of an exodus, a large-scale migration of people from a land that has literally changed owners overnight. Days after Armenian Prime Minister Nikol Pashinyan announced an end to the war with Azerbaijan over this small, mountainous enclave, thousands of ethnic Armenians have been forced to flee their lands, which have been handed back to Azerbaijan. 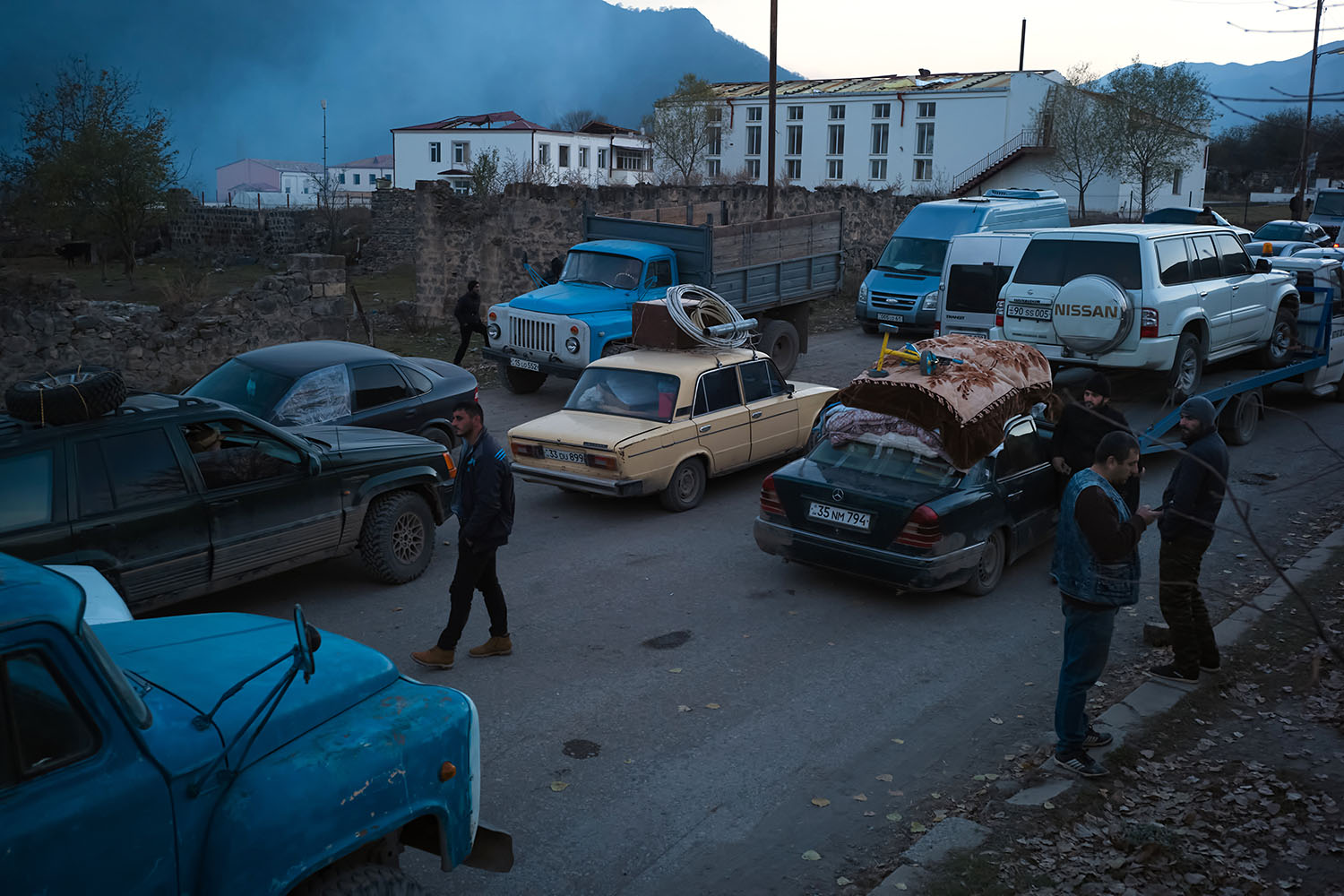 Armenians sit in gridlocked traffic in Kalbajar on Nov. 14 as they flee the territories in Nagorno-Karabakh that will be handed over to Azerbaijan.Alex McBride/Getty Images

In the district of Kalbajar, history was on rewind. Almost exclusively populated by ethnic Azerbaijanis before they were expelled by Armenians after the armed clashes of the early 1990s, Kalbajar again became part of Azerbaijan, sending all the people who had raised their children and animals and houses there looking for a new home and a new life.

Even before Pashinyan announced the end of the war in the wee hours on Facebook, bringing an end to six weeks of bitter fighting that left 1,400 Armenians dead, Armenians had a pervasive sense of loss. For a Christian country surrounded by Muslim neighbors on three sides, and for a people still struggling to come to grips with genocide more than a century ago, the national psyche is dominated by existential fears. Everywhere, people fret that Turkey—which backed Azerbaijan in this conflict and has never officially recognized the 1915 slaughter of about 1.5 million Armenians—is trying to wipe them out.

Now that Armenians are pouring out of Nagorno-Karabakh, they are leaving little behind. Some villagers, feeling they had nothing more to lose, set their houses on fire, finding solace in knowing their enemies could never sleep there. 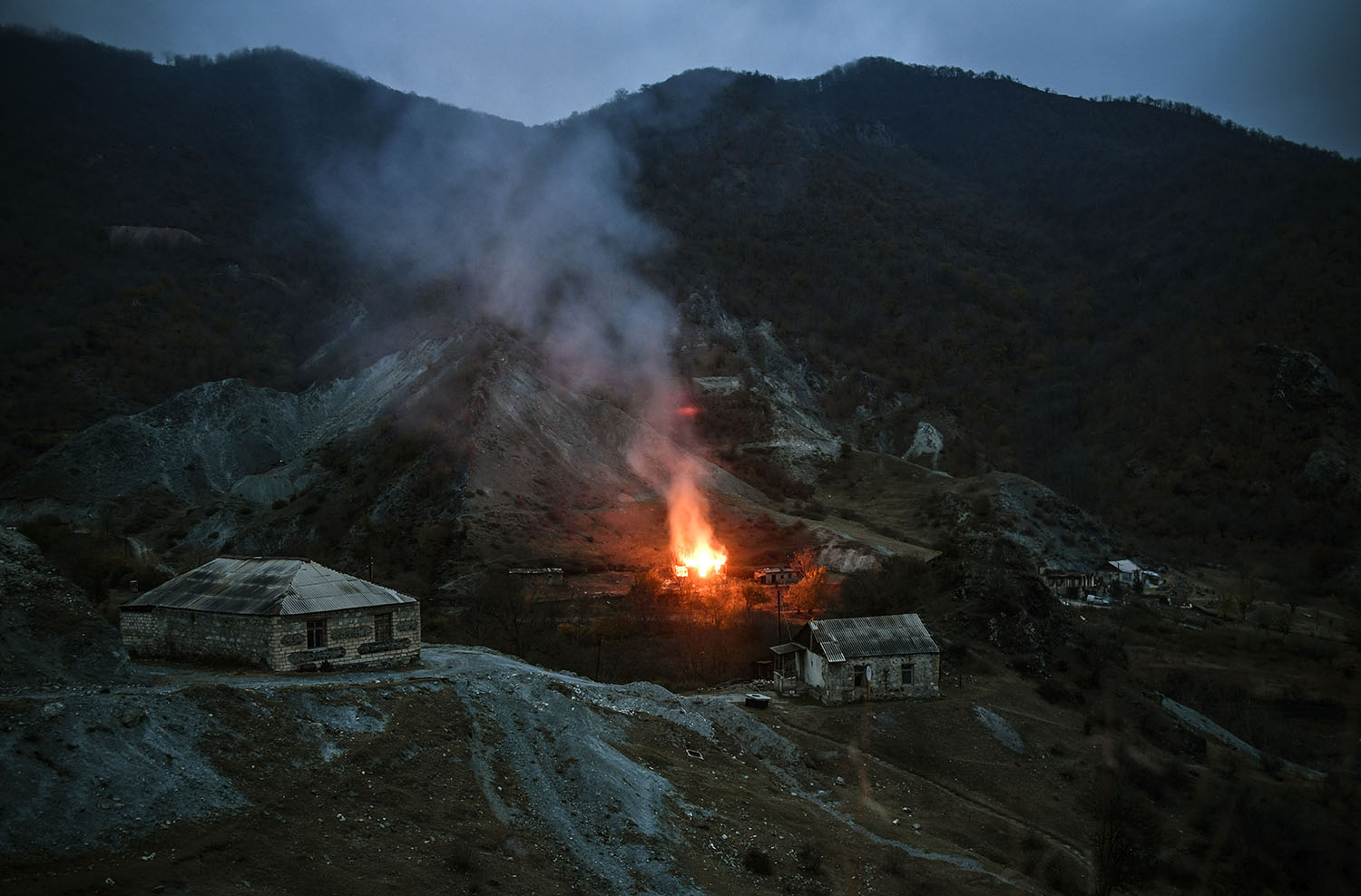 A house burns in a village outside the town of Kalbajar on Nov. 14. ALEXANDER NEMENOV/AFP via Getty Images 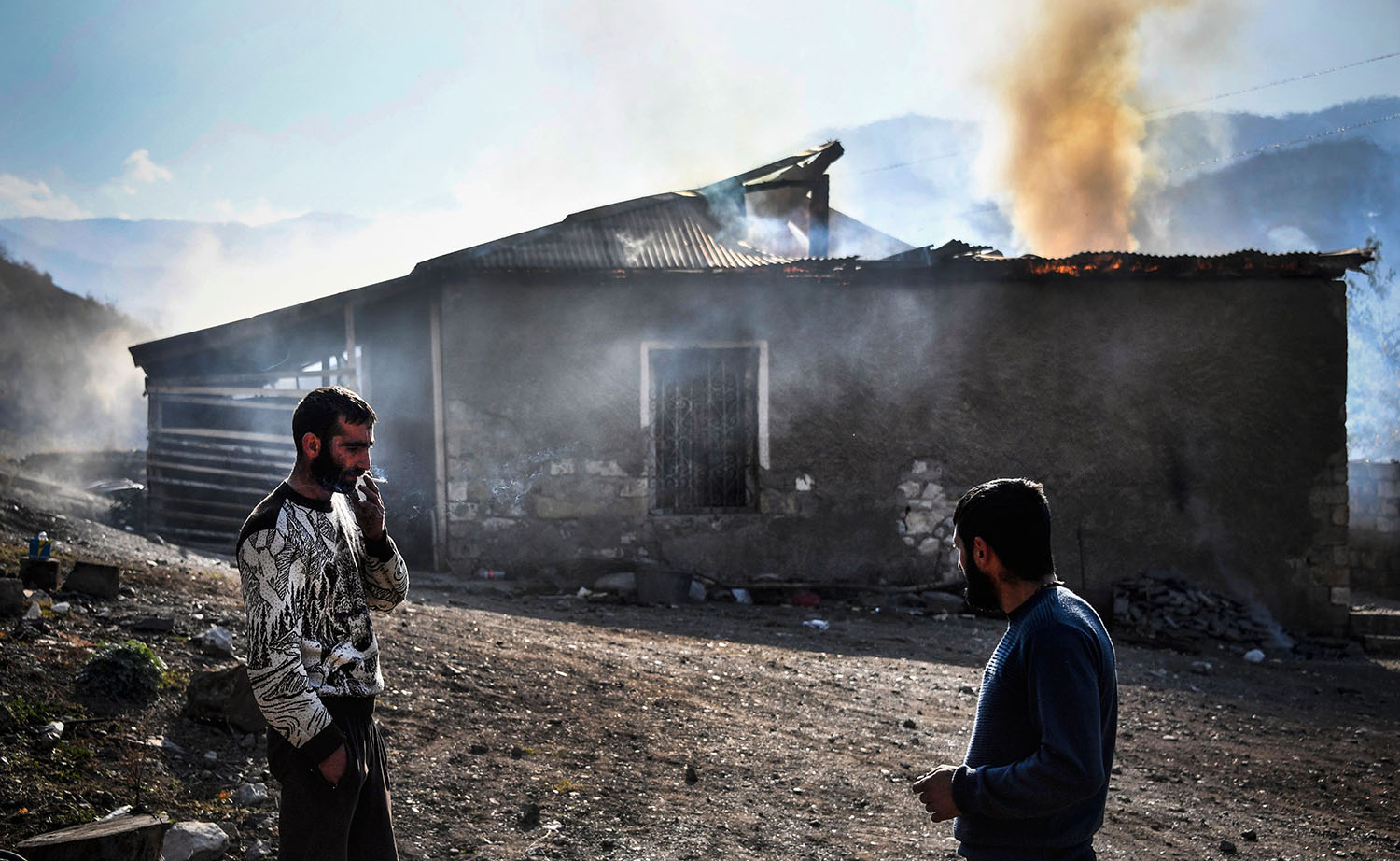 Residents look at burning houses in the village of Charektar outside the town of Kalbajar on Nov. 14. Villagers set fire to their houses before fleeing to Armenia as parts of the territory are handed over to Azerbaijan. ALEXANDER NEMENOV/AFP via Getty Images

“How can I leave it here for a Muslim to live there? In the place I made, and I created?” said Arsen Mnatsakanyan, 34, his hands soot-blackened and bleeding. The farmer and volunteer soldier had lived in the house for 20 years and raised his children there. He said he would go to Armenia, or perhaps Russia—he didn’t know yet. What he did know was that he could not live with the thought of another man looking through the window he had installed, or under the roof he had fitted.

“Here the villagers live with their land, the animals, the soil,” he said. “Losing it is everything,” he said.

On the last day before handover, hardly a single home along Nagorno-Karabakh’s northern road, a winding mountain pass that connects the enclave’s capital of Stepanakert to Armenia, was left intact. Roofs were stripped bare, leaving open beams like the skeleton of a decayed leaf as autumn turns to winter. In other places, buildings were charred—or still in flames. Azerbaijani officials branded the destruction “ecoterrorism.”

The conflict was tough. What came after may have been tougher.

The conflict was tough. What came after may have been tougher. There was barely any phone signal, no internet, no hot water, no heat, and little food other than bread and instant noodles. Confusion reigned: Where, exactly, are the borders with Azerbaijan now? If the northern road is no longer Armenian territory, and the Lachin corridor road that leads to Armenia closed so that Russian peacekeepers could clear away corpses, was everybody trapped? There were always lots of questions. There weren’t many answers.

Some of the most visceral fears were saved for the ancient hillside monastery of Dadivank, thought at first to have been passed over to the other side under the agreement. People traveled for hundreds of miles from around Armenia to take a last tear-blurred look, running their fingertips over the brickwork to divine every crevice. Some kissed the Armenian flag, hoping for some sort of divine intervention. 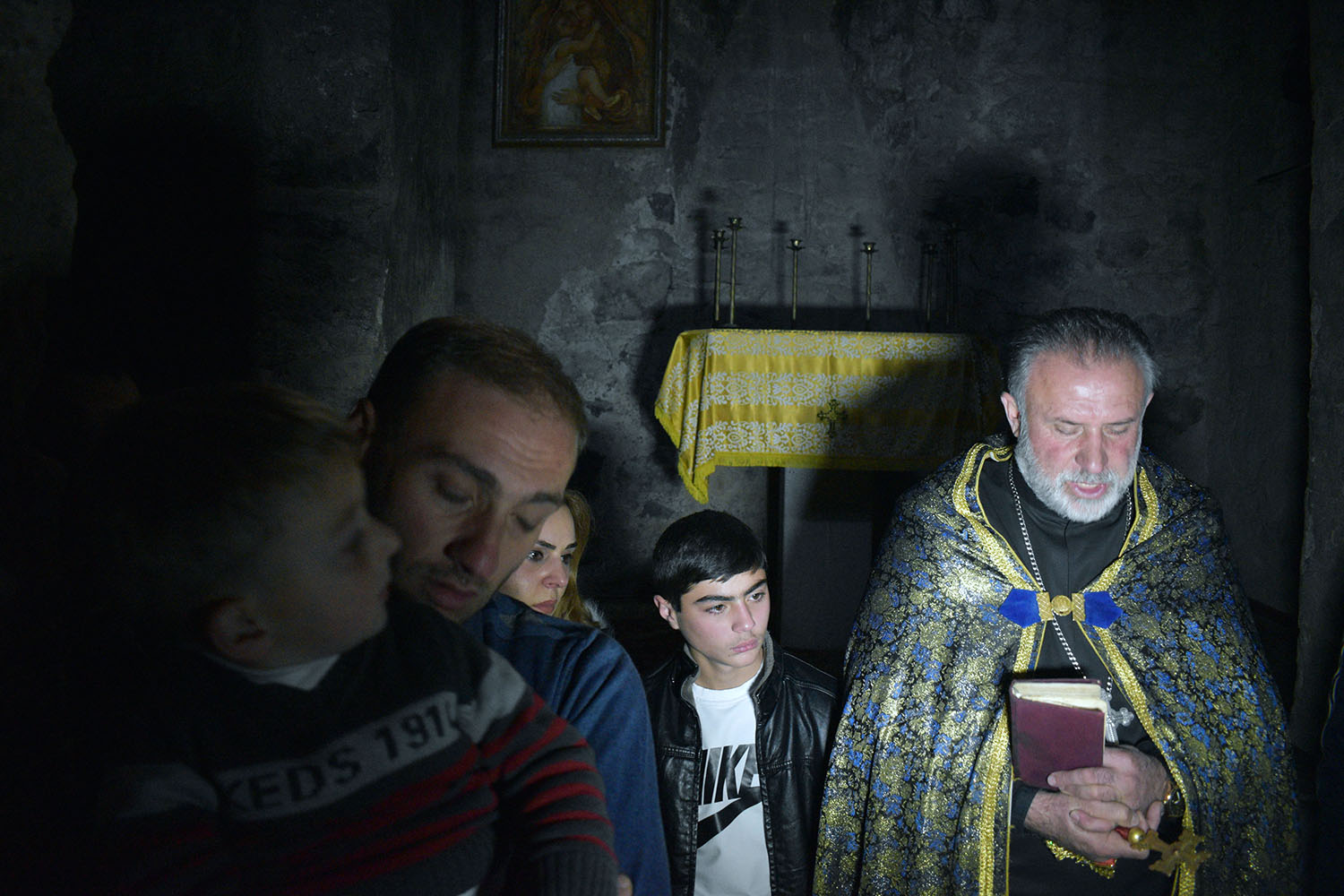 Priest Hovhannes Hovhannisyan offers a last baptism as people travel from all over Armenia to take what they fear could be a last look at Nagorno-Karabakh’s Dadivank monastery on Nov. 11. Liz Cookman for Foreign Policy 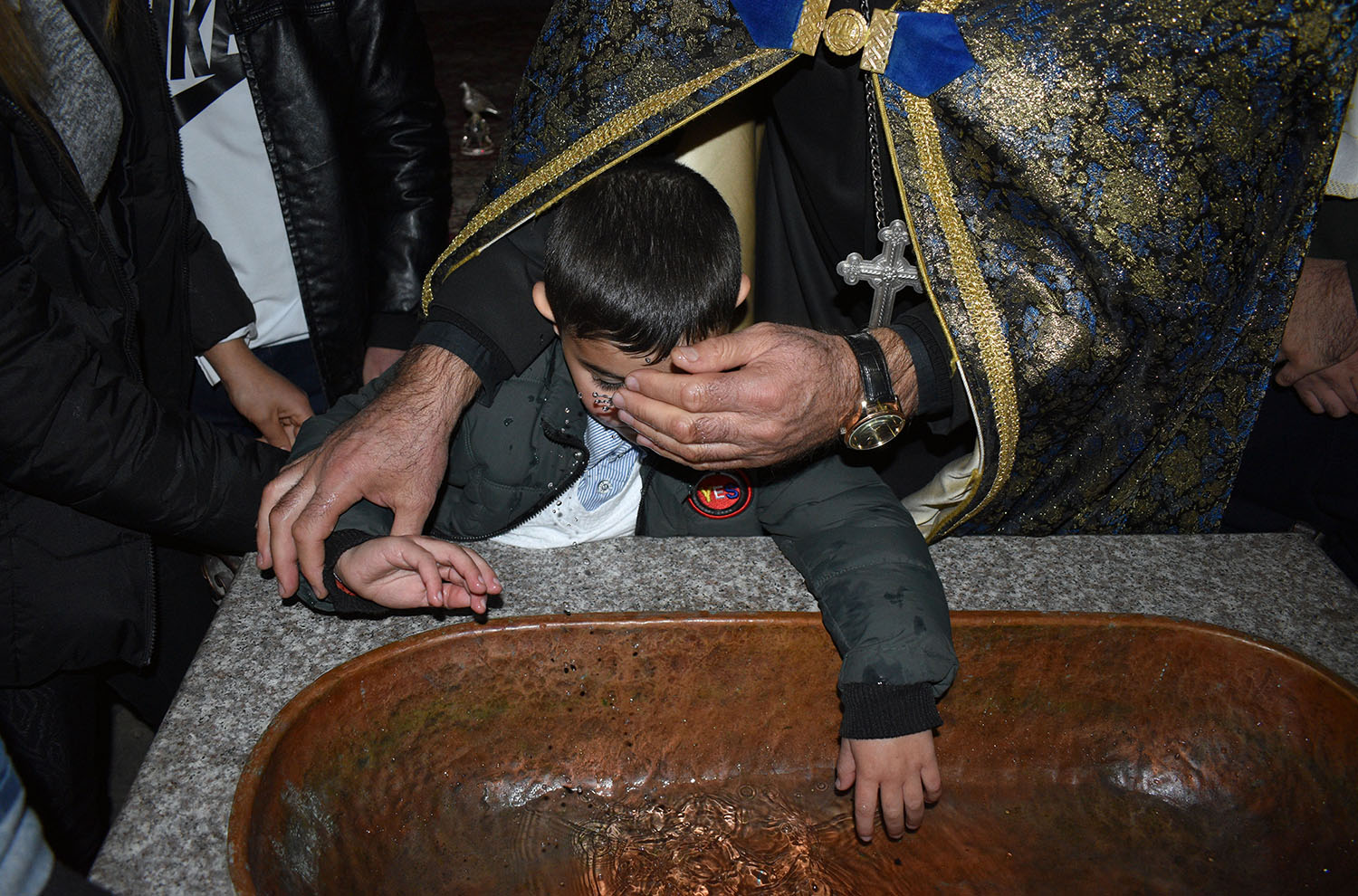 A child is baptized at Nagorno-Karabakh’s Dadivank monastery as Russian peacekeepers arrive to oversee the transfer of the nearby province of Kalbajar to Azerbaijan on Nov. 14. Liz Cookman for Foreign Policy

“I have said before I am staying, and I will stay,” priest Hovhannes Hovhannisyan said.

“We are the first Christian nation, but we’ve always been tortured,” he said. “But I am telling you with certainty Christians will be back here.”

As the priest conducted one last baptism, dripping oil from a bird-shaped decanter into a low altar and chanting to a crowd of people, tanks full of Russian peacekeepers arrived in a sign that there was, after all, some hope. 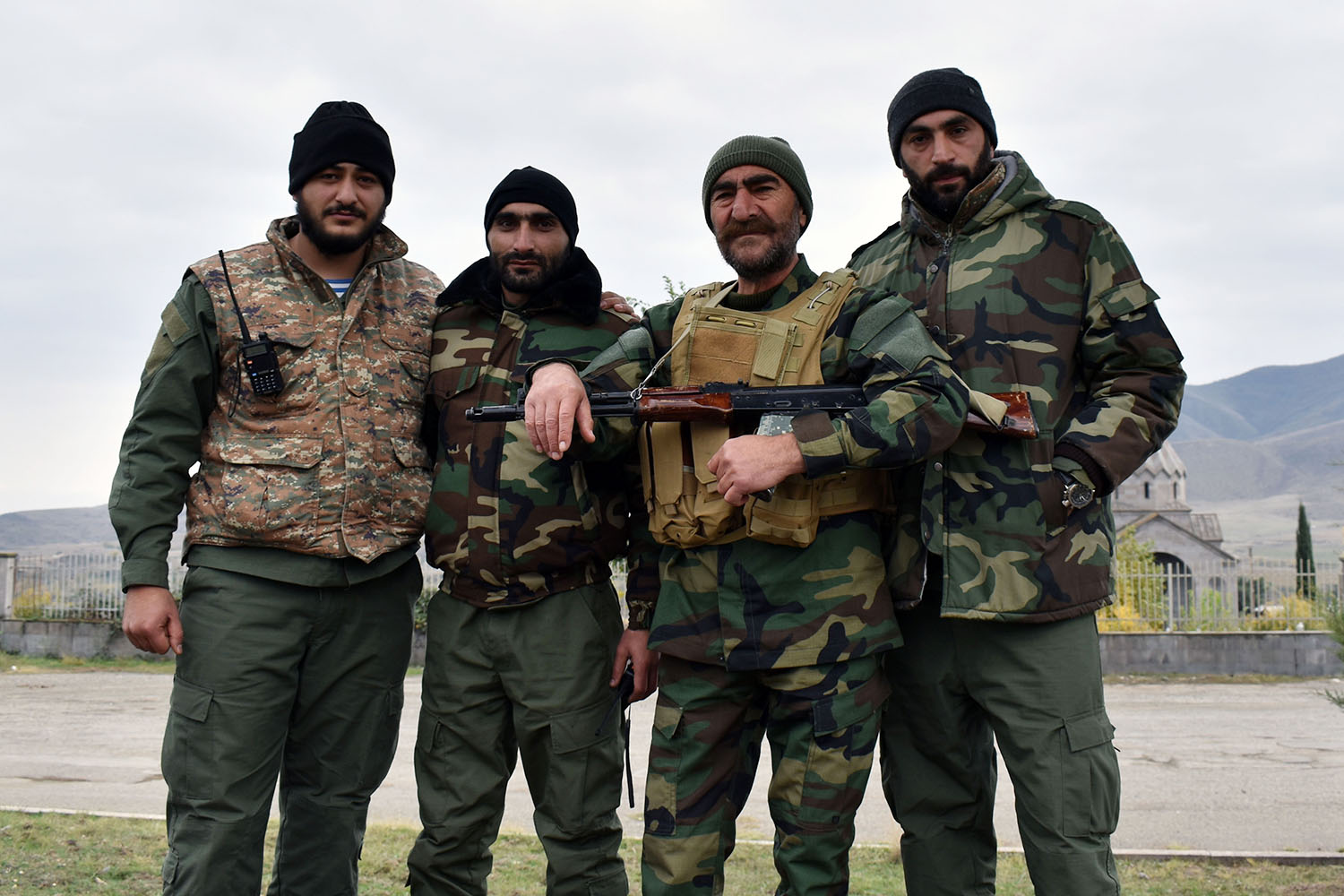 Volunteer fighters pose with well-known rebel fighter Pavel Manukyan (second from right) in the town of Askeran, near what was the front line in Nagorno-Karabakh on Nov. 15. Liz Cookman for Foreign Policy

“These buildings, ancient buildings, are important to the people here, so we are here to protect them,” said a Russian peacekeeper at Dadivank, who asked not to be identified as he was not authorized to speak to the press.

The Russian troops—and soon, perhaps, Turkish ones too—see their job as peacekeepers. But not everyone is ready for peace. Though the fighting was over, Ardak and Ararat, mechanics in their normal life, are still ready to offer their services on the front line. They fried potatoes and processed sausage to fortify themselves for a bitter night in the biting cold of a mountain military outpost. 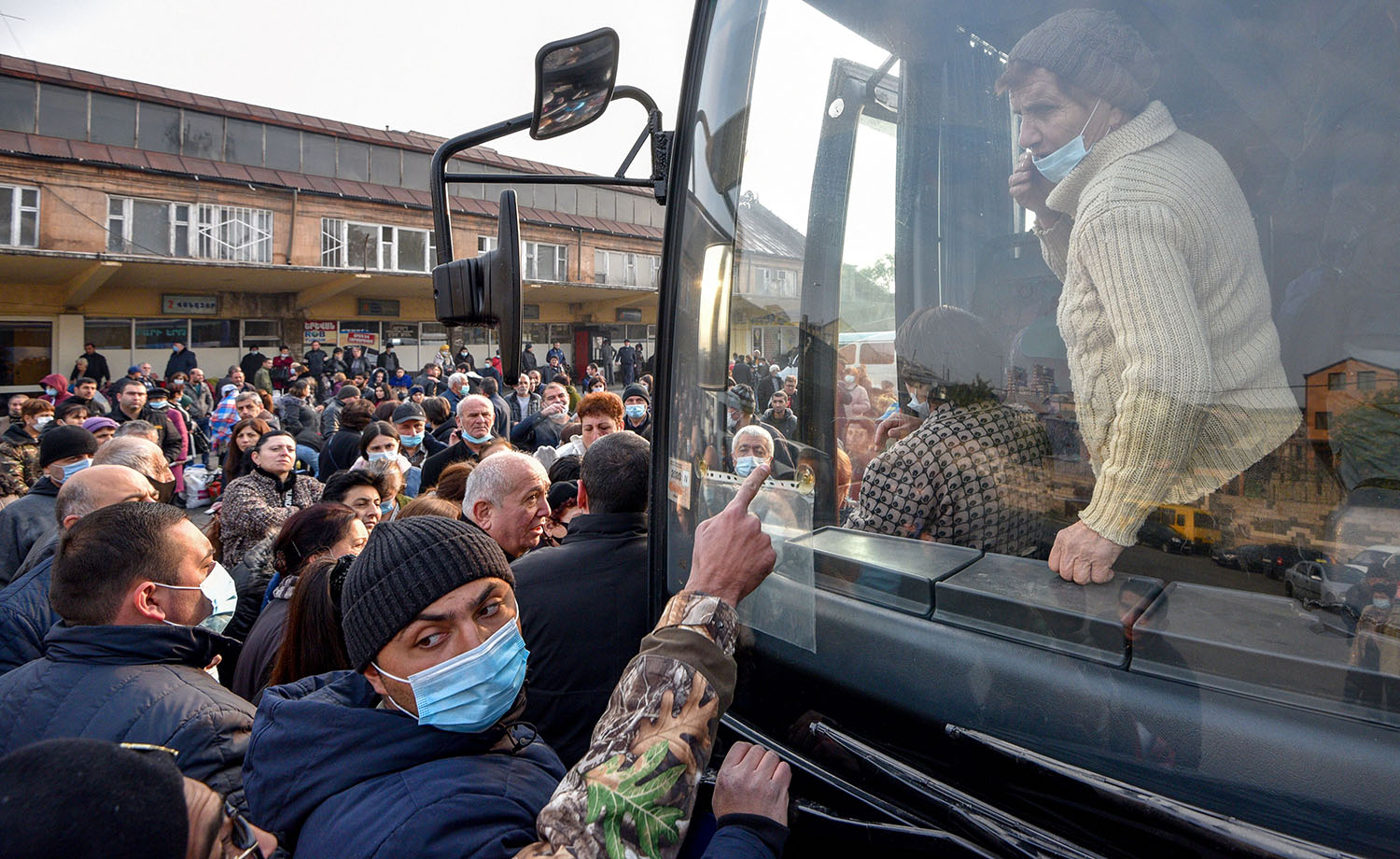 Refugees from the Nagorno-Karabakh region get in a bus in Yerevan, Armenia, heading to Stepanakert, the region’s main city, on Nov. 17.KAREN MINASYAN/AFP via Getty Images

They fear Azerbaijani forces may yet try to seize more land. Like them, many are angry at Pashinyan for signing a deal that strongly favored Baku after more than a thousand died to keep the whole enclave Armenian. Protesters in Armenia’s capital of Yerevan stormed parliament last week, demanding Pashinyan’s resignation, even though the president of Nagorno-Karabakh acknowledged that it had been unavoidable due to six weeks of unremitting losses.

“He should resign, or he should kill himself. Or commit harakiri,” said Ardak. “If he resigns, the old regime will come back and that’s not good either,” he said, referring to the elites in power prior to the 2018 Velvet Revolution.

Ardak had what seemed to him a better idea. “I should just take over,” he said.

In Nagorno-Karabakh, the Cycle of Ethnic Cleansing Continues

In the 1990s, the Azerbaijani population was expelled. Now Armenians could face the same fate.

People trashed the parliament and stormed the presidential palace after Armenia’s PM bowed to the inevitable.

Correction, Dec. 1, 2020: The Lachin corridor road leads to Armenia. A previous version of this article misstated the road’s destination.