The funds will establish an artificial intelligence center and a space force, but it could come at the expense of foreign aid.

British Prime Minister Boris Johnson on Thursday announced plans for the largest defense spending increase since the Cold War, vowing to end the United Kingdom’s “era of retreat.” In a speech to Parliament updating lawmakers on the progress of the biggest defense and foreign-policy review in three decades, Johnson announced an additional $22 billion in defense spending over the next four years, adding to the current annual budget of $55.5 billion.

“Our national security in 20 years’ time will depend on decisions we take today,” Johnson said. “The international situation is now more perilous and intensely competitive than at any time since the Cold War.”

The increased budget would make Britain the largest defense spender in Europe and second only to the United States among NATO members, Johnson’s government said. The funds will be used to establish a new artificial intelligence center, to create a Royal Air Force Space Command, and to “restore Britain’s position as the foremost naval power in Europe.” The move is projected to create 40,000 new jobs, in a stark contrast to the years of government austerity since 2008.

Why now? The timing of the announcement was deliberate, coming as Britain transitions out of the European Union and the United States prepares for a new presidential administration. “The French and Germans can say what they like. This sends a powerful message to the Americans that the one ally who can ease their burdens is the U.K.,” Julian Lindley-French, a distinguished visiting research fellow at the National Defense University, told the Wall Street Journal. The plans also come amid sharp criticism of Johnson over his handling of the coronavirus pandemic.

Keir Starmer, the leader of the opposition Labour Party, welcomed the move but voiced concerns that it could come at the cost of British commitments to foreign aid spending. The Treasury is looking to reduce the U.K.’s foreign aid spending from 0.7 percent of the national budget to 0.5 percent—even as the pandemic is projected to push as many as 150 million people into extreme poverty by 2021.

Breaking Britain’s aid pledge would “not only undermine public trust, but also hugely weaken us on the global stage,” Starmer said. 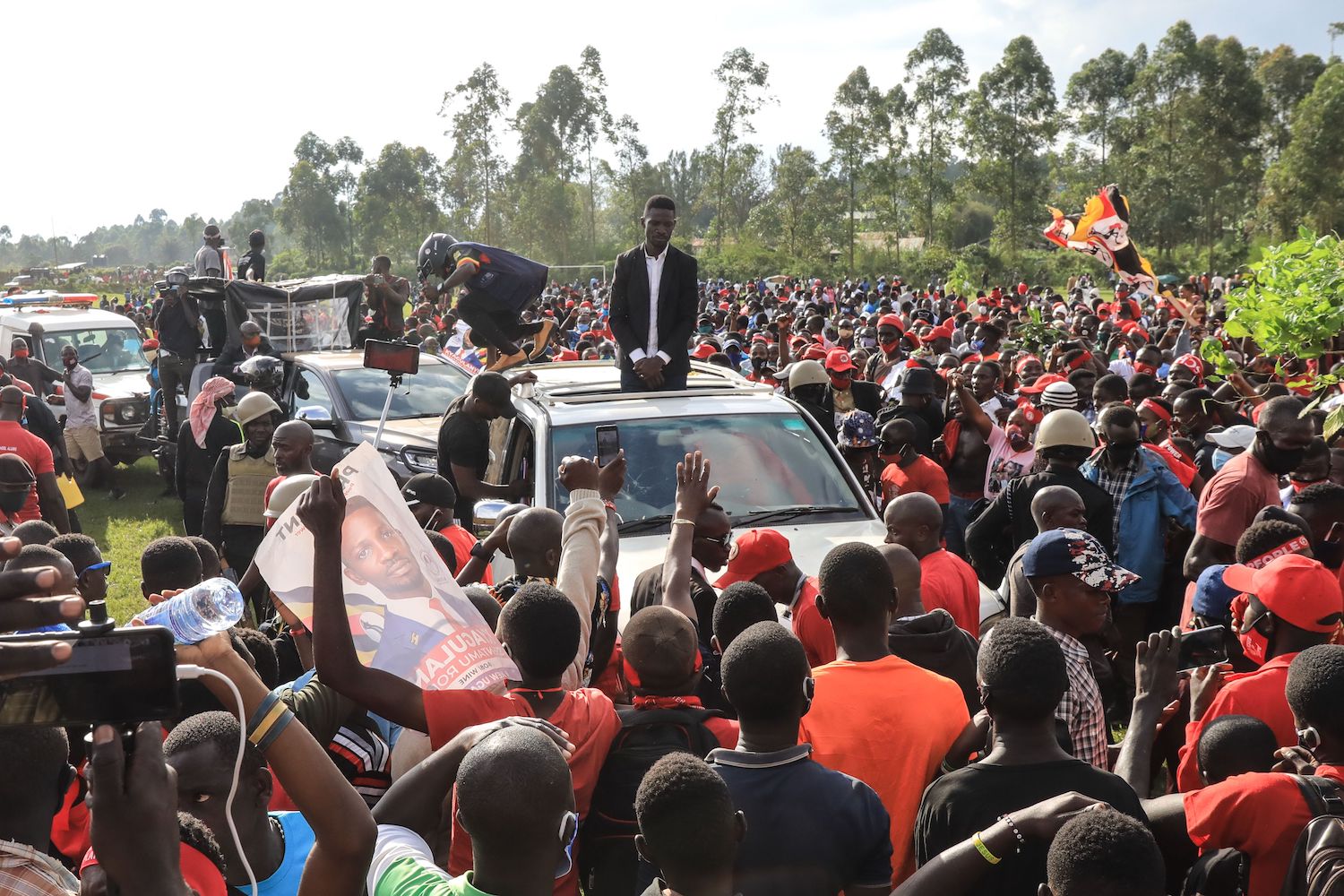 Opposition presidential candidate Bobi Wine stands through a car roof surrounded by supporters during a presidential rally in Fort Portal, Uganda, on Nov. 23.

Protests in Uganda. Thirty-seven people have been killed in Uganda after the arrest of presidential candidate Bobi Wine last Wednesday sparked some of the worst unrest in a decade. A police statement said that the deaths occurred during security operations but did not go into detail. Wine, a prominent musician, presents the most serious challenge to incumbent President Yoweri Museveni in elections set to be held in January.

Museveni has been in power since 1986. Wine, who was arrested for allegedly violating coronavirus lockdown restrictions, was released on Friday.

Russian lawmakers take aim at U.S. social media. On Thursday, a group of Russian lawmakers largely drawn from the ruling United Russia party presented draft legislation that would enable the government to restrict access to U.S. social media giants deemed to discriminate against Russian media. Facebook, Twitter, and YouTube all now label the accounts of state-funded media from Russia, China, and elsewhere to flag their affiliation.

Over the past several years, the Kremlin has increasingly sought to exert greater control over the internet and free speech online. Last year a controversial new law that seeks to create a “sovereign” Russian internet that could be cut off from the rest of the world came into force, but experts have expressed doubt as to whether it’s technically possible.

A defiant election in Burkina Faso. Voters in Burkina Faso went to the polls on Sunday in presidential and parliamentary elections, despite threats of violence from extremist groups linked to al Qaeda and the Islamic State. Voting was not held in large parts of the country where the state has lost control to the jihadi insurgency. Official data released before election day indicated that some 7 percent of the population was unable to vote as a result.

Over 1 million people have been displaced by increasing violence in Burkina Faso in what the United Nations has described as the world’s fastest-growing displacement crisis.

EU budget stumbles. The European Union has once again been pushed to the brink of crisis as Hungary and Poland vetoed its $2.1 trillion, seven-year budget and coronavirus recovery package over stipulations that member states receiving EU funds must respect the rule of law. EU budgets require the approval of all 27 member states to pass.

Both Hungary and Poland have taken a more authoritarian tack in recent years and are the only member states ever to be investigated by the European Commission for undermining the bloc’s principles of democracy and rule of law. If leaders fail to strike a deal by Jan. 1, 2021, when the budget is due to come into force, the bloc will operate on drastically reduced funds.

Insecurity in South Sudan. Over 1,000 people have been killed and more than 400 people have been abducted in South Sudan over the past six months due to simmering intercommunal violence, according to the United Nations. A February peace deal sought to bring an end to the civil war that has killed an estimated 400,000 people since it began in 2013. But a vicious cycle of intercommunal violence and revenge attacks, often over cattle raiding, has grown worse.

David Shearer, the special representative of the U.N. secretary-general for South Sudan, warned that there was an increased risk of conflict during the upcoming dry season, as people start moving closer to sources of water for their cattle.

Protests in Brazil. Protests have broken out across Brazil after a Black man, João Alberto Silveira Freitas, was beaten to death by white security guards in front of a supermarket in the city of Porto Alegre. The killing came on the eve of Black Consciousness Day, which celebrates Brazil’s Black community. Black and mixed-race people make up 57 percent of the Brazilian population but account for 79 percent of those killed by the police.

Germany’s new gender quota. Germany’s coalition government struck an agreement on Friday that will introduce a mandatory quota that 30 percent of people serving on the boards of listed German companies must be women. Women currently make up under 13 percent of the boards of companies listed on Germany’s DAX index, the 30 largest companies traded on the Frankfurt stock exchange. In the United States and Sweden, by comparison, women make up close to 29 and 25 percent of board members, respectively.

Augusta Saraiva contributed to this report.

NEW FOR SUBSCRIBERS: Want to read more on this topic or region? Click + to receive email alerts when new stories are published on Security, Europe

Italy’s politics is a constant cycle of failed populist waves.

What the Right Gets Wrong About Socialism

As Scandinavia shows, it does feature plenty of public ownership—but also a thriving economy.

Uganda Heads to the Polls, With ‘Dictator’ on the Line

Popular singer Bobi Wine seeks to unseat long-serving President Yoweri Museveni in the election, which has been marred by misinformation.

2020 was one of the deadliest years on record for such assassinations, many of which are still unclaimed.