China Is Both Weak and Dangerous

“The China Nightmare” lays out the risks of a surprisingly fragile state.

Three decades after the fall of the Soviet Union, the United States finds itself engaged in a new great-power competition with China. Since assuming office, Chinese President Xi Jinping has launched his country on a more assertive path, and the COVID-19 pandemic has intensified the rivalry. On the surface, China appears confident, with a recovering economy, a modernizing military, accelerating technological development, and expanding diplomatic influence around the world.

In a timely and insightful new book, The China Nightmare: The Grand Ambitions of a Decaying State, the American Enterprise Institute’s Dan Blumenthal takes a close look at China, examining its capacity and strategic objectives. In so doing, he sheds light on the paradox of modern China: It is an assertive, ambitious power, but also one with underlying weaknesses that could upend its rise, or, as the title contends, hasten its decay. In his words, “The main argument of this book is that despite (or perhaps because of) China’s growing internal weaknesses, it is pushing forward grand strategic ambitions.” 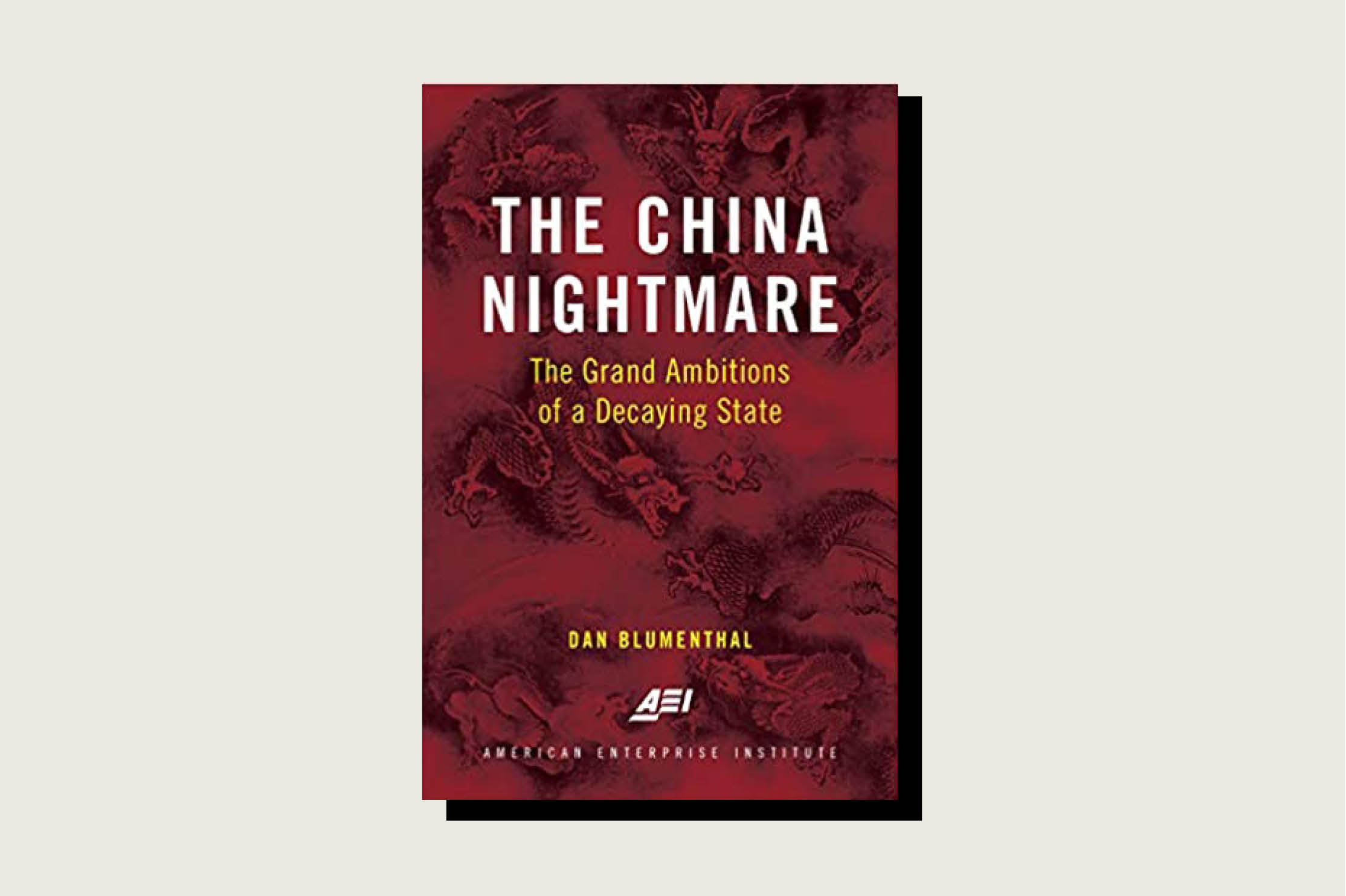 Blumenthal’s study of China began years ago on the Pentagon’s China desk, and he brings a deep understanding of the developments that have transformed the country since. Scholars debate whether China desires limited regional hegemony or dominance of the global system. Blumenthal’s answer is clear: China’s ambitions are worldwide. He points to the 19th Chinese Communist Party (CCP) Congress work report delivered by Xi in 2017. The report predicts that by mid-century, China will be a “prosperous, modern, and strong socialist country with a world-class military.” According to Blumenthal, Beijing’s “struggle for geopolitical mastery will not be limited to Asia,” because “China wants to lead a new world order centered around Chinese power and governed by Chinese-made rules.”

Even if the CCP is primarily concerned with regime survival, he argues, it views a Sinocentric international order as essential. A perception of China as the natural center of the world has always served as an important source of domestic legitimacy.

But China’s global ambitions belie underlying weaknesses. Blumenthal observes that the CCP itself “has assessed that its own internal and external security situation is in fact overwhelmingly challenging.” Blumenthal cites a litany of economic, social, and political challenges facing Beijing, including a burgeoning demographic crisis, slowing GDP growth due to the party’s reassertion of state control of the economy, capital flight with wealthy Chinese moving hundreds of billions of dollars offshore, environmental degradation that is stunting Chinese agricultural production and the health of its people, the prospect of a middle-income trap due to China’s struggle to unleash innovation, and fears of separatism and domestic unrest. As Xi tries to rally China behind a vision of national renewal and achieve the country’s grand ambitions on the world stage, he is hamstrung by the reality of China’s flaws.

Blumenthal is correct that China is weaker than many understand. His analysis accords well with that of one of the authors of this review. In his new book, Kroenig argues that China’s autocratic system of governance is a fundamental handicap in its great-power rivalry with the United States. Historically, from the ancient world to the Cold War, autocratic powers have performed poorly in long-term, great-power competitions against democratic rivals. Autocratic-governance systems stifle economic growth and innovation by emphasizing cultures of conformity and limiting free enterprise. In the diplomatic realm, dictators struggle to build deep and lasting international alliances and partnerships. When it comes to military matters, they devote more resources to repressing their own people than to defending against external threats. China is afflicted with each of these challenges: a slowing economy; few true friends abroad; and domestic insecurity.

Going further, Blumenthal shrewdly delves into the CCP’s struggle to reconstitute new sources of domestic legitimacy. Former Chinese leader Deng Xiaoping’s transition toward a market economy undercut the Marxist-Leninist roots of the ruling party. As Blumenthal writes, “China today is making up for the absence of attractive political principles or ideologies by creating a new empire of fear.” In lieu of Marxism-Leninism, it “offers increasingly strident appeals to an imperialist nationalism.”

It is for these reasons that, even as a much more fragile power than it appears, China poses a serious threat to the United States and its allies. Blumenthal notes that “declining powers are no less dangerous than rising ones,” pointing to Russia’s invasion of Ukraine as an example of a weak power aggressively lashing out against its neighbors.

Blumenthal, therefore, carves out an important third way of thinking about China. Many in Washington see China as ten feet tall and great-power competition as the foremost priority of the United States. Others describe a China with serious internal problems, which does not pose much of a threat, and with which Washington can continue to cooperate. In contrast, Blumenthal’s China is both weak and dangerous.

Toward the end of the book, Blumenthal asks, “‘What kind of world do we want to live in?’ The CCP has a clear answer, if not the long-term means to achieve its vision.” Yet the CCP may have a clear answer, but Washington does not. The 2017 U.S. National Security Strategy of the United States of America correctly diagnosed the problem of great-power competition with China, but it did not articulate the desired end state of this rivalry.

The Biden team needs to step up and push new initiatives

Blumenthal sketches the outlines of a theory of victory for the United States: “This will mean convincing China that such a competition is too costly and could come at the expense of Beijing’s crucial goal of regime survival.”

This is a good answer and a clearer one than other China watchers have provided. We have previously argued that the United States should seek to revitalize, adapt, and defend the U.S.-led, rules-based international system. In the long term, the United States would like China to be a cooperative member of that system. But that will not be possible any time soon, perhaps not as long as the CCP reigns in Beijing.

In the short term, therefore, the United States and its allies must defend that system from economic, governance, and military threats that China poses, and impose serious costs on the CCP when it violates widely held international standards. This strategy will be successful when it changes the minds of China’s leaders and, as Blumenthal also argues, convinces them that challenging the U.S.-led system is too difficult and costly.

Successfully executing such a strategy will require a deep understanding of China’s strengths and weaknesses as well as its hopes and fears. This is exactly what Blumenthal’s important book provides. It should be required reading for all those who seek to better understand China, and, most of all, for the government officials who are responsible for protecting us from this weak and dangerous nation.

Matthew Kroenig is deputy director of the Scowcroft Center for Strategy and Security at the Atlantic Council and a professor in the Department of Government and the Edmund A. Walsh School of Foreign Service at Georgetown University. Twitter: @matthewkroenig

Jeffrey Cimmino is a program assistant in the Scowcroft Center’s Global Strategy Initiative.

The Biden team needs to step up and push new initiatives