The Global News Stories You Missed in 2020

From Ethiopia to Nagorno-Karabakh, here are the events that may have flown under the radar in the year of the coronavirus pandemic.

Welcome to While You Weren’t Looking, Foreign Policy’s weekly update on emerging global stories. Below is a look back at some of the biggest stories of the year—that weren’t Trump- or coronavirus-related.

If you would like to receive While You Weren’t Looking in your inbox every Thursday, please sign up here.

The Stories You May Have Missed

Welcome to While You Weren’t Looking, Foreign Policy’s weekly update on emerging global stories. Below is a look back at some of the biggest stories of the year—that weren’t Trump- or coronavirus-related.

If you would like to receive While You Weren’t Looking in your inbox every Thursday, please sign up here.

The Stories You May Have Missed

Not since World War II has a single event so dominated an entire year as the coronavirus pandemic did 2020. The virus monopolized global headlines and brought an unprecedented slowdown in activity as offices shuttered and public spaces emptied. But not everything came to a standstill. People still took to the streets in protest, wars continued despite the U.N. secretary-general’s plea for a global cease-fire, and new conflicts erupted. From wildfires to hurricanes, natural disasters wreaked havoc—a looming reminder of the coming climate crisis.

Here’s a look back at some of the biggest non-coronavirus stories of 2020. 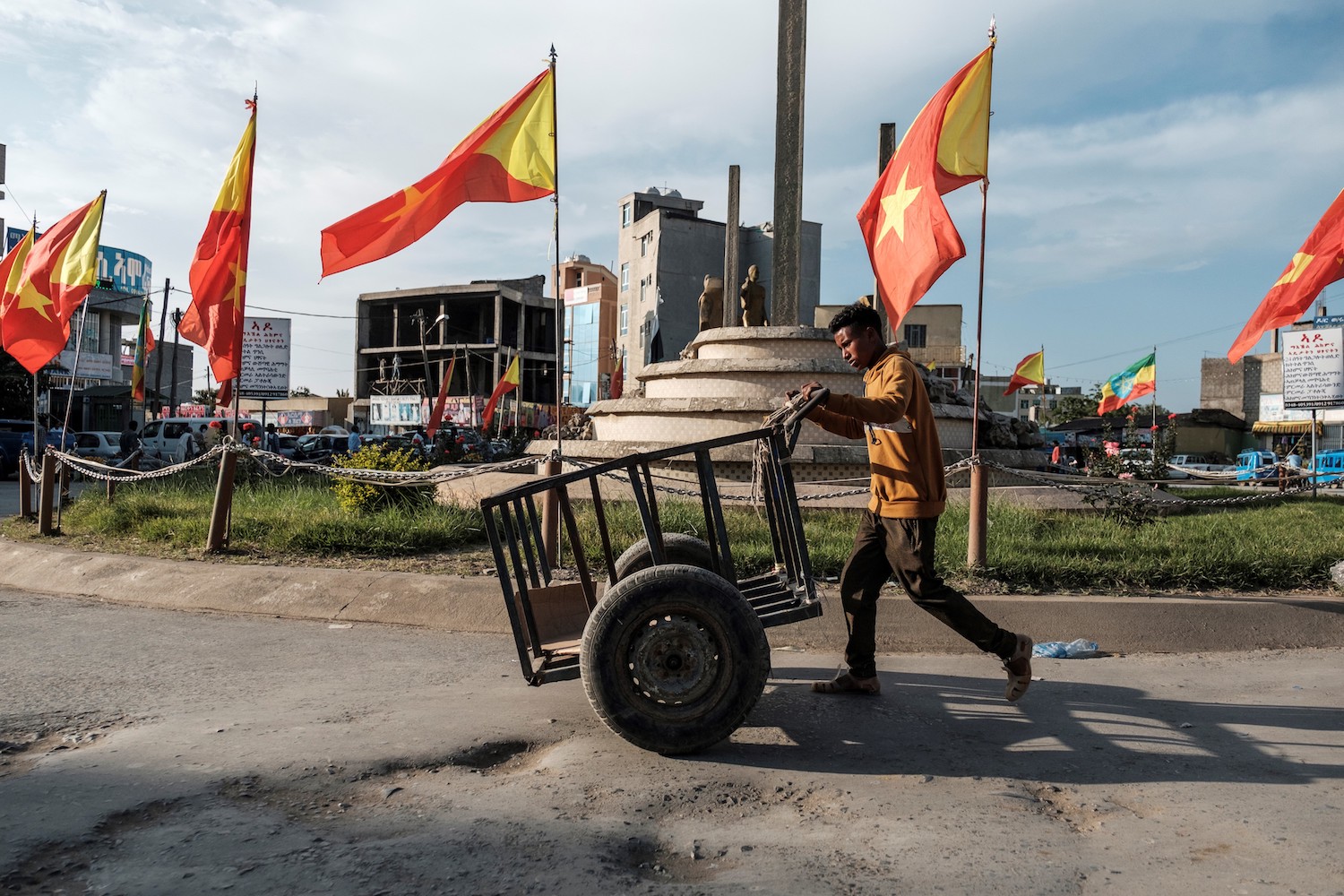 A young man pushes a cart in front of Tigrayan flags at Martyrs Square in the city of Mekelle, on Sept. 9, 2020. EDUARDO SOTERAS/AFP via Getty Images

In early November, Ethiopia’s Nobel Peace Prize-winning Prime Minister Abiy Ahmed launched a military offensive in the restive Tigray region in the country’s north. Long-simmering tensions between the federal government and regional authorities came to a head as Abiy accused the region’s ruling party, the Tigray People’s Liberation Front, of attempting to raid a federal military base.

Amid reports of ethnically and religiously motivated violence, the United Nations Office on Genocide Prevention and the Responsibility to Protect issued warnings about the risk of genocide and ethnic cleansing. In the town of Mai Kadra, some 600 people from the Amhara and Wolkait ethnic groups, minorities in the region, were strangled and hacked to death on Nov. 9, according to the Washington Post.

The three-week conflict culminated with heavy shelling of the regional capital, Mekelle, by Ethiopian forces before Abiy declared victory on Nov. 28. Almost 1 million people were displaced by the fighting, with some 50,000 seeking refuge in neighboring Sudan. While the war is over for now, the conflict was a symptom of the long-standing battle over the country’s ethno-federal system—one that could have profound implications for peace and stability in the Horn of Africa and beyond, as Teferi Mergo wrote for Foreign Policy. 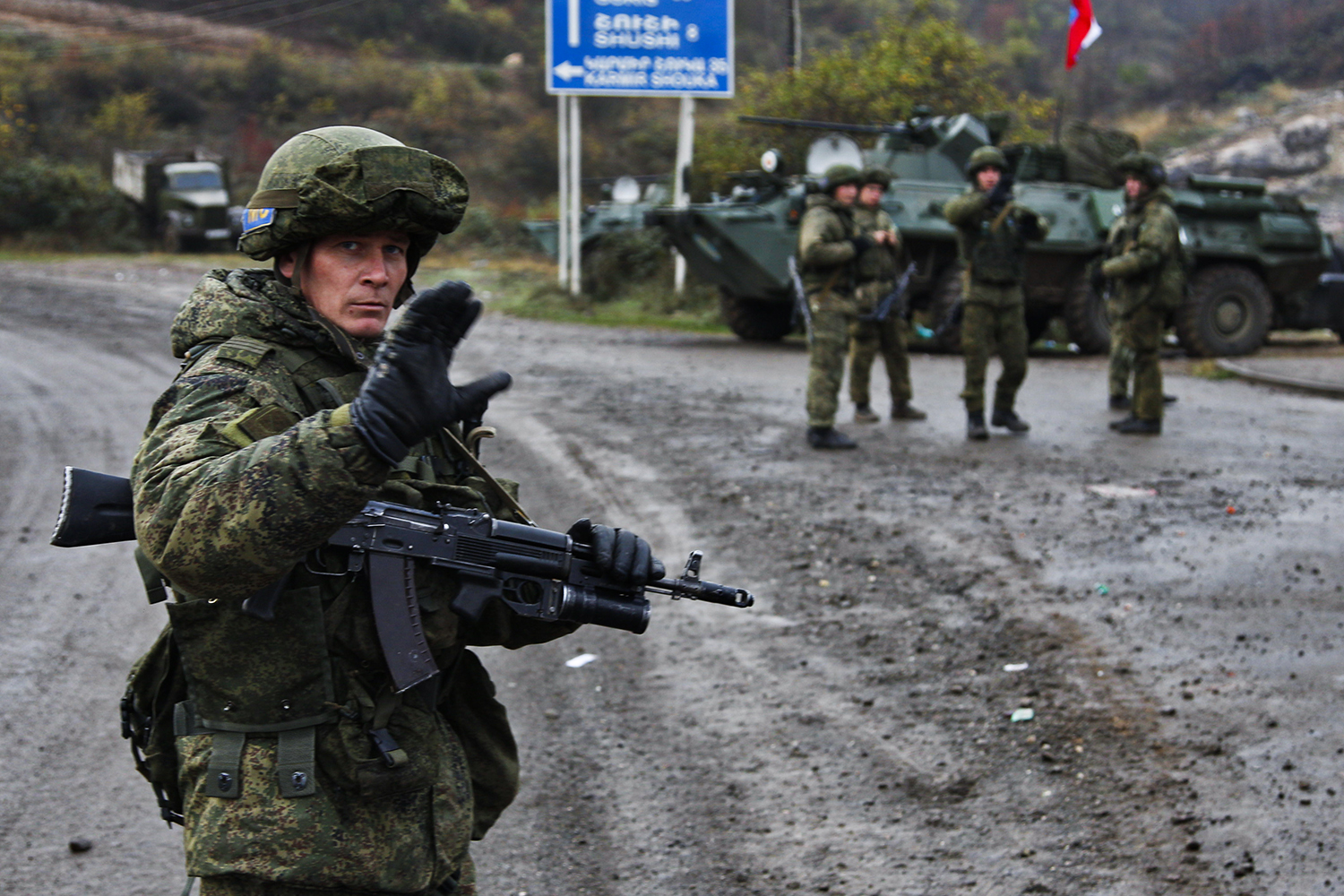 A Russian peacekeeper holds up his hand to stop a photo being taken as a checkpoint is set up at the entrance to Stepanakert, Nagorno-Karabakh’s regional capital, on Nov. 13. Jack Losh for Foreign Policy

In late September, war erupted between Armenia and Azerbaijan over the disputed Nagorno-Karabakh region. It was the worst flare-up in fighting since a 1994 cease-fire left much of the territory in Armenian hands. Tensions have simmered between the two countries for decades, but they reached a head this year after the self-declared government of Karabakh held elections in the spring, much to Azerbaijan’s displeasure.

At least 16 people were killed in border clashes over the summer, prompting thousands to take to the streets of the Azerbaijani capital calling for a war. A Russian-brokered agreement brought the war to an end on Nov. 9 and enabled Azerbaijan to maintain control of land seized during the conflict, with Armenia withdrawing from parts of the disputed territory. As part of the deal, the Kremlin will maintain a force of 2,000 peacekeepers along the road connecting Nagorno-Karabakh with Armenia.

While most countries sought to stay on top of the unfolding health and economic crisis at home, 2020 saw Turkish President Recep Tayyip Erdogan double down on his neo-Ottoman ambitions to project Turkish power across the Eastern Mediterranean and into the Middle East.

In January, Turkish troops were deployed to Libya to shore up support for the embattled U.N.-backed Government of National Accord as it faced off against forces loyal to the renegade Gen. Khalifa Haftar. Over the summer, tensions flared in the Eastern Mediterranean over Turkey’s energy exploration—culminating in the European Union approving plans to sanction an unspecified number of Turkish officials and businesses involved in the drilling. The decision came just days before the Trump administration issued sanctions against Turkey, a NATO ally, for its 2017 purchase of Russian S-400 missile defense system.

And in Nagorno-Karabakh, Ankara quickly pledged its “unconditional” support for Baku, supplying weapons, drones, and mercenaries allegedly recruited in Syria—helping to win the war for Azerbaijan, at least for now.

Elections in Belarus, a country often described as Europe’s last dictatorship, are usually predictable affairs. Not this year: Teacher-turned-opposition leader Svetlana Tikhanovskaya capitalized on growing discontent with longtime President Aleksandr Lukashenko to mount a formidable challenge in elections in August.

As expected, Lukashenko was declared the winner of elections that were widely believed to be rigged. But for several weeks after the vote, Belarusians took to the streets almost daily in mass protests that at times exceeded an estimated 100,000 people—a once unthinkable sight in the police state.

Over 30,000 people are thought to have been arrested since the election on Aug. 9, and human rights advocates have documented harrowing reports of torture and police brutality within prisons. With neither side backing down, Lukashenko has clung onto power as Tikhanovskaya has established what increasingly looks like a government-in-exile in Lithuania, meeting with foreign heads of state.

It wasn’t all bad news for public health in 2020. In August, Africa was declared free from wild type polio by the independent Africa Regional Certification Commission after a decadeslong campaign to stamp out the virus, which once paralyzed some 75,000 children in Africa annually. Tedros Adhanom Ghebreyesus, the director-general of the World Health Organization, described the declaration as “one of the greatest public health achievements of our time.”

Lebanon was already contending with the pandemic and the worst economic crisis in decades when the largest explosion in the country’s history ripped through Beirut’s port on Aug. 4, leaving 200 people dead and thousands injured. Thousands of tons of the explosive ammonium nitrate had been stored in a warehouse, alongside 15 tons of fireworks and jugs of oil and kerosene.

The blast itself was likely triggered by accident, albeit one enabled by years of corruption and government dysfunction. Four months since the explosion, no one has been held accountable for allowing such a deadly concoction to fester in a warehouse for six years.

In late November, farmers in India mounted what some have described as the largest protest in human history as millions took part in a solidarity strike over controversial changes to the country’s agriculture laws. Farmers fear the legislation, passed by parliament in September, could leave them open to exploitation from larger corporations.

With some 60 percent of the Indian population dependent on agriculture, the new laws have struck a nerve among huge swaths of the country. Farmers camped out on key highways in northern India have vowed to keep on protesting through the winter, even as temperatures plunge.

Central America was battered by Hurricanes Eta and Iota, which made landfall less than two weeks apart in November—the first recorded instance of two Category 4 storms striking within 15 miles of each other in a two-week period, according to the Washington Post. The disasters also came off the back of an already record-breaking hurricane season. More than half a million people were internally displaced in Guatemala, Honduras, and Nicaragua, and entire communities have been left underwater.

With the region already grappling with the economic impact of coronavirus-related lockdowns, the damage wrought by the storms is expected to drive new waves of migrants north to the U.S. border in search of work.