With violence on the rise and the U.S. military drawing down, international donors are pulling back some assistance to Afghanistan. Women in refugee camps stand to suffer.

HERAT, Afghanistan—On an October morning at the Kahdistan health clinic for internally displaced persons, the line of men, women, and children stretched around the street corner. Inside, the health care workers at the small clinic, run by Doctors Without Borders (MSF), prepared for the day ahead—working to provide vital services to as many women as possible.

Across Afghanistan, women have minimal access to reproductive health care and safe delivery services. For displaced women, the situation is more dire. More than 4 million people are displaced within the country, and thousands of citizens return every day from neighboring Pakistan and Iran, many by deportation. This influx threatens to push the country’s straining health care system to a breaking point, particularly in poorly equipped border regions such as Herat province.

The coronavirus pandemic has already exacerbated many problems facing Afghan women. Restrictions on movement have likely worsened women’s access to health care. COVID-19 has increased stress on facilities providing care to people who are displaced, just as donor funding for health care is beginning to dwindle, both because of declining interest and the economic stress of the pandemic. After Kabul, Herat province has the country’s second-highest number of cases of COVID-19. 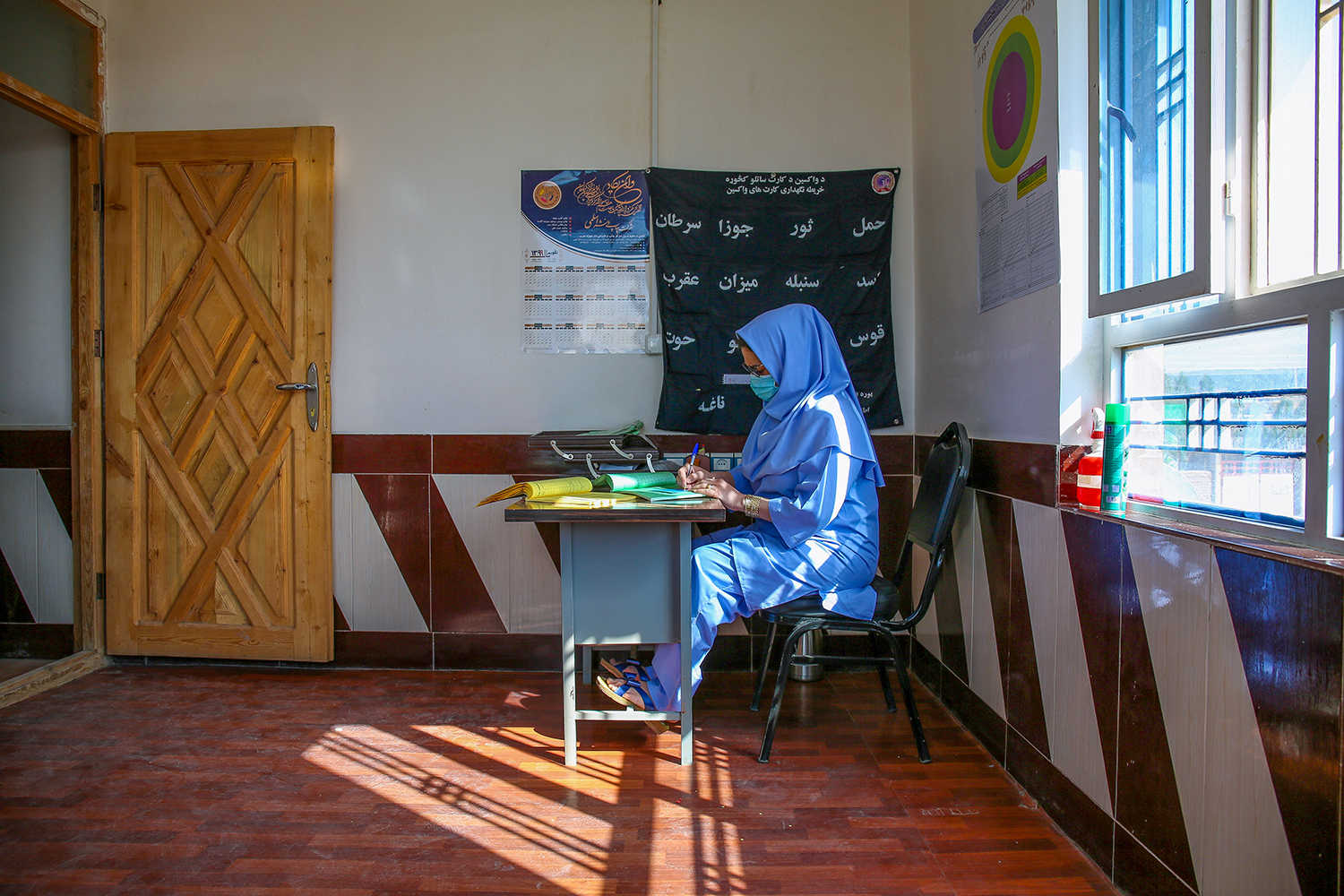 A nurse logs a baby’s vaccination at the Kahdistan health clinic on Oct. 7. The clinic, which is run by Doctors Without Borders, was established in 2018 for maternal health but now welcomes all patients, providing basic health care. Bridging the gap between the Shahrak-e-Sabz camp and hospitals in Herat, it remains the only port of call for thousands of women from the camp seeking reproductive health care. Lynzy Billing for Foreign Policy

Since 2001, international donor funding has led to crucial improvements in health care access in Afghanistan, with nongovernmental organizations delivering vital services in Taliban-controlled districts and other insecure regions. International funds currently make up more than 50 percent of the Afghan government’s national budget. But as violence rises again in Afghanistan and the United States prepares to draw its military presence down to 2,500 troops on the ground, donors are disengaging.

Last month, foreign donors met at a conference in Geneva to discuss the future of aid to Afghanistan. Despite a dire need for continued assistance, the country received $12 billion over the next four years—a $3 billion decrease compared to the past four years. The pledges also come with stricter conditions, including stipulations for progress in the peace deal with the Taliban. Many Afghans fear that the funds may never reach them if violence keeps escalating, removing assistance when it is needed most. 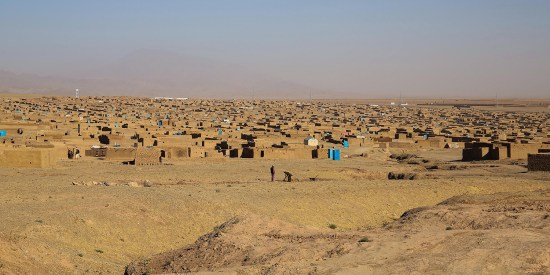 Shahrak-e-Sabz is the largest camp for people who are displaced in western Afghanistan, most of whom fled fighting and drought in 2018. Lynzy Billing for Foreign Policy

The deteriorating security situation will only displace more people, increasing the demand for health services. But facilities providing care to women in Afghanistan have also come under deadly attack. After militants stormed an MSF-operated maternity ward in Kabul in May, the organization decided to withdraw from the hospital—leaving women in the area without vital emergency obstetric care.

Afghanistan now faces a second wave of the coronavirus, and as winter sets in and emergency needs arise, the looming funding shortfalls could hit aid programs for displaced people the hardest. Small health facilities such as the Kahdistan health clinic, often the sole care providers for many women, will be the worst-affected by a decrease in donor funding. 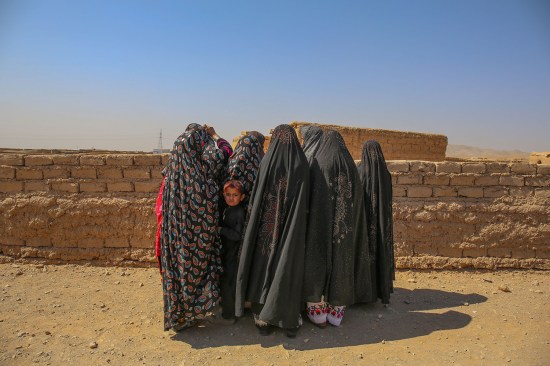 Women at the Shahrak-e-Sabz camp wait for a ride to take them to the Kahdistan health clinic in Herat on Oct. 7. Lynzy Billing for Foreign Policy

The MSF clinic caters to Shahrak-e-Sabz, the largest settlement of displaced people in western Afghanistan, most of whom fled fighting and drought in 2018. It was established in 2018 as a maternal clinic but now welcomes all patients, providing basic health care, including vaccinations. Bridging the gap between the camp and hospitals in Herat, it remains the only port of call for thousands of women from the camp seeking reproductive health care.

Parisa Mohammadi, 24, is the only midwife at the clinic, and she works six days a week. Though its staff do not deliver babies, the clinic is the first stop for pregnant women from the camp, and demand for both checkups and contraception is high. “We see about 70 patients a day here and most of them are pregnant,” she said. “They don’t have money to travel to the city, and we have an ambulance here so we can take them if it is an emergency.” 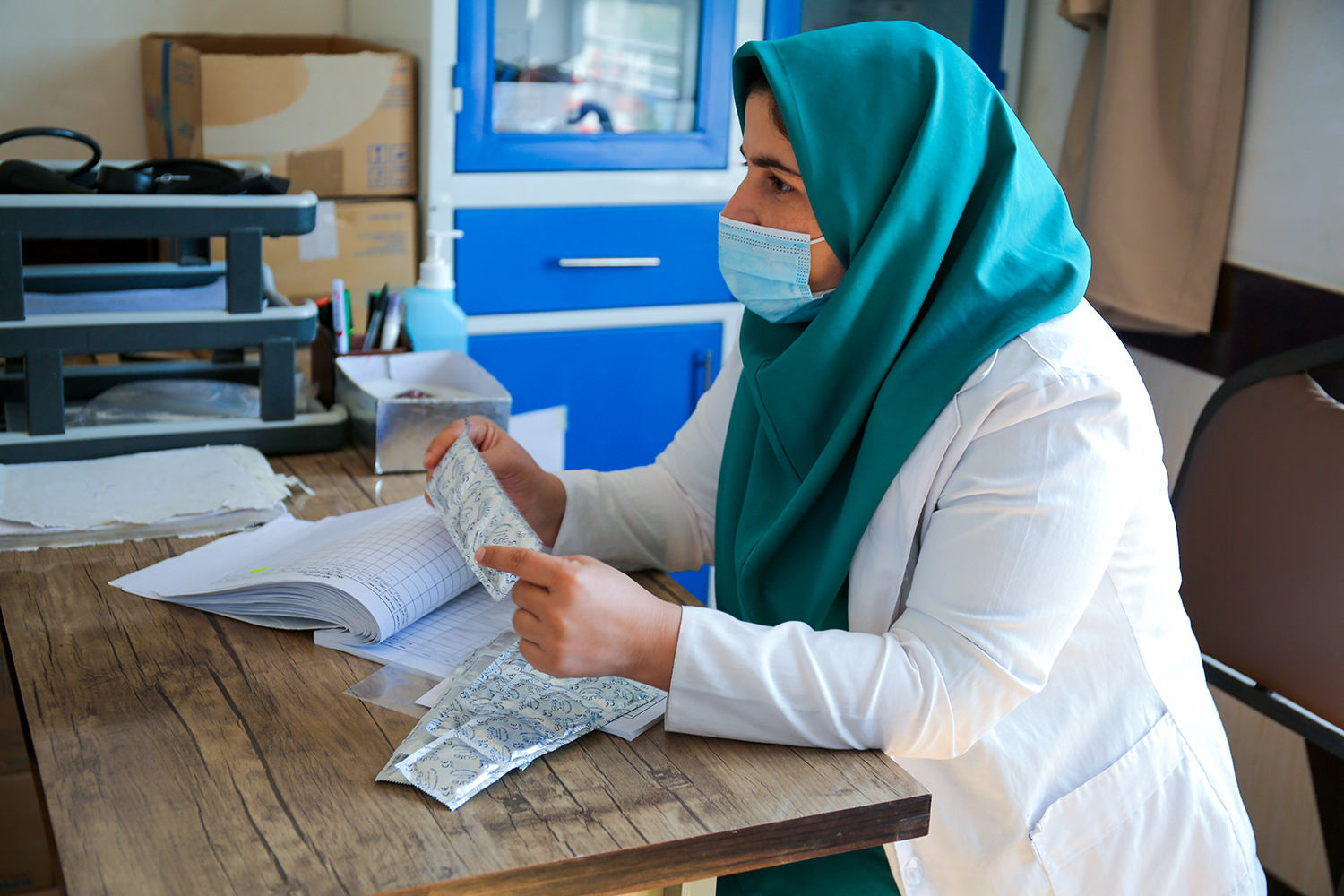 Parisa Mohammadi, the only midwife at the Kahdistan health clinic, talks to a patient about family planning options on Oct. 7. She said the biggest success of the clinic has been in family planning, and demand for contraception is high. “Each patient is given 30 condoms a month, but so many come back asking for more before the month is finished,” Mohammadi said. Lynzy Billing for Foreign Policy

Left: The nurses and doctors at the Kahdistan clinic try to tackle issues of reproductive health and family planning methods using picture books. Each patient receives a book marked with their contraception instructions. Right: Despite cultural sensitivities, all forms of family planning are available in the clinic. “Most women come with their husbands to the clinic, but some take the pill secretly because they know they cannot face the difficulties of feeding another child when they can hardly cater for those they have,” Mohammadi said.Lynzy Billing for Foreign Policy

At the same time, the midwife has also witnessed the effects of declining international support for aid to Afghanistan. For example, World Vision’s current program in the camp is due to end on Dec. 31, according to its national director, Asuntha Charles. As the organization reduced its operations, Mohammadi said, an influx in female patients to the Kahdistan clinic followed.

While women can access basic care, medicine, and contraception at the clinic, the MSF staff cannot always address the varied complications the patients face, including malnourishment and anemia. Limited supply caused by funding issues means that only the most severely malnourished pregnant women receive ready-to-use therapeutic food. 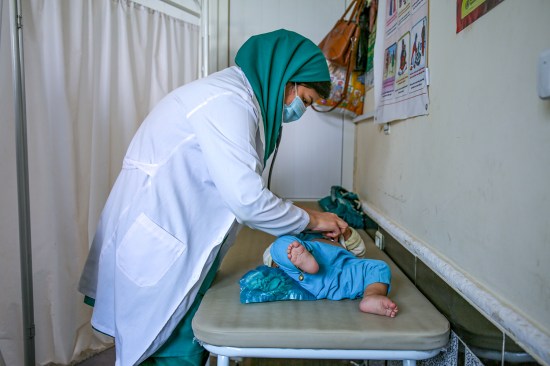 A doctor attends to a baby who was brought to the Kahdistan clinic with respiratory problems on Oct. 7. Lynzy Billing for Foreign Policy 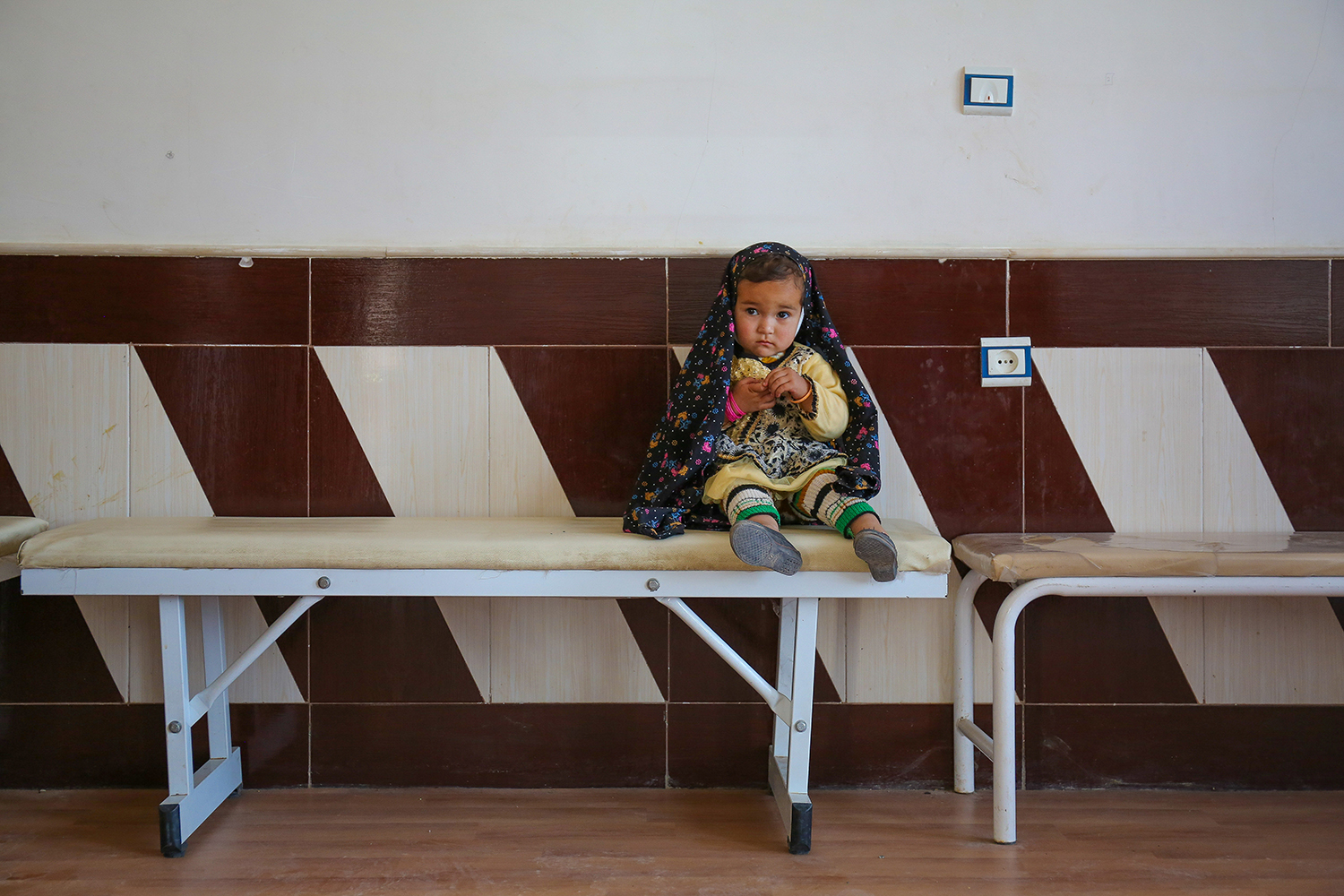 A child waits while her mother sees a doctor at the Kahdistan clinic on Oct. 7. Lynzy Billing for Foreign Policy 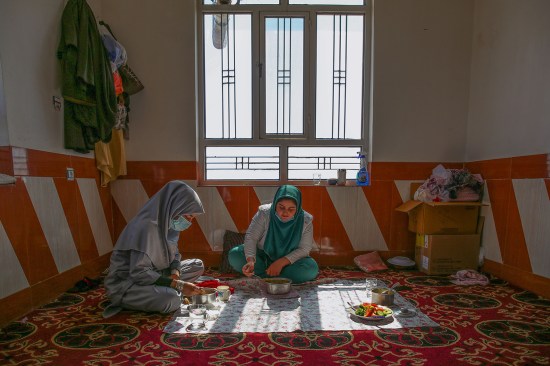 And some issues do not even reach the Kahdistan clinic’s doorstep. The clinic does not have the capacity to handle severe complications from abortion, which is illegal in most cases in Afghanistan and often carried out without supervision. Marie Stopes International is the leading post-abortion care provider in Afghanistan, but Herat has no hospital or clinic that treats abortion complications. 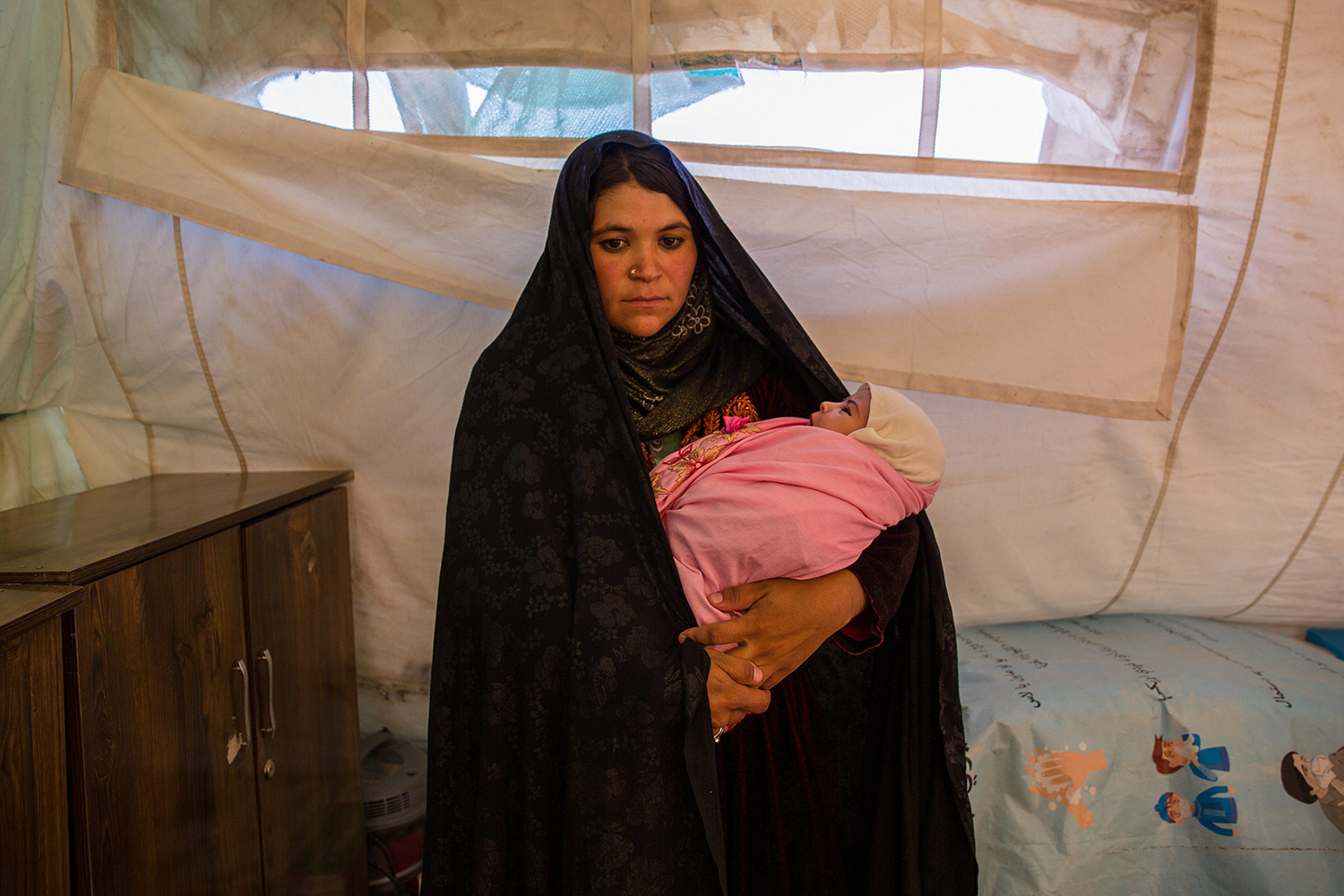 Zarmina, 25, holds her 15-day-old daughter, Bushra, at the Shahrak-e-Sabz camp on Oct. 7. She has been living at the camp for two years since being driven away from Ghor province by fighting between government forces and the Taliban. Lynzy Billing for Foreign Policy

Mothers in the Shahrak-e-Sabz camp have also watched as outside support for maternal health care has decreased. Somaya, 24, a mother of four who moved from Badghis province in 2018, gave birth to her youngest child at home in January because of the lack of maternity wards in close proximity to the camp.

“After the baby was born, [the MSF clinic] vaccinated her and I am very grateful to them,” Somaya said. “But the problem is that they are only giving basic medicine. For many problems, the clinic can’t provide the medicine or surgery we need.”

Zarmina, 25, has lived in the camp for two years, driven away from her home in Ghor province by fighting between government forces and the Taliban. “At the camp, we are suffering from hunger. Some are starving. We are homeless,” she said. “We are suffering but at least our life is safe here.” She gave birth to her third child at home in September because there was no vehicle available to take her to the hospital in Herat.

Like Somaya, Zarmina said that the MSF clinic has limited resources. “They just gave me some medicine to calm me down,” she said. “They didn’t have the medicines I needed and I didn’t have money to go to the city to the hospital.” 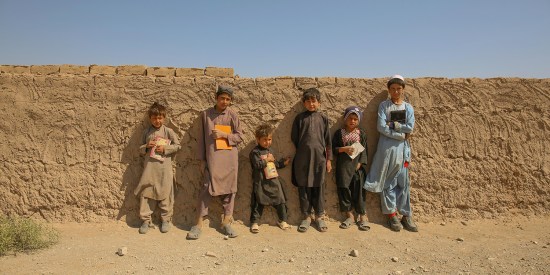 Young boys return home to the Shahrak-e-Sabz camp after finishing their classes at school on Oct. 7. Lynzy Billing for Foreign Policy 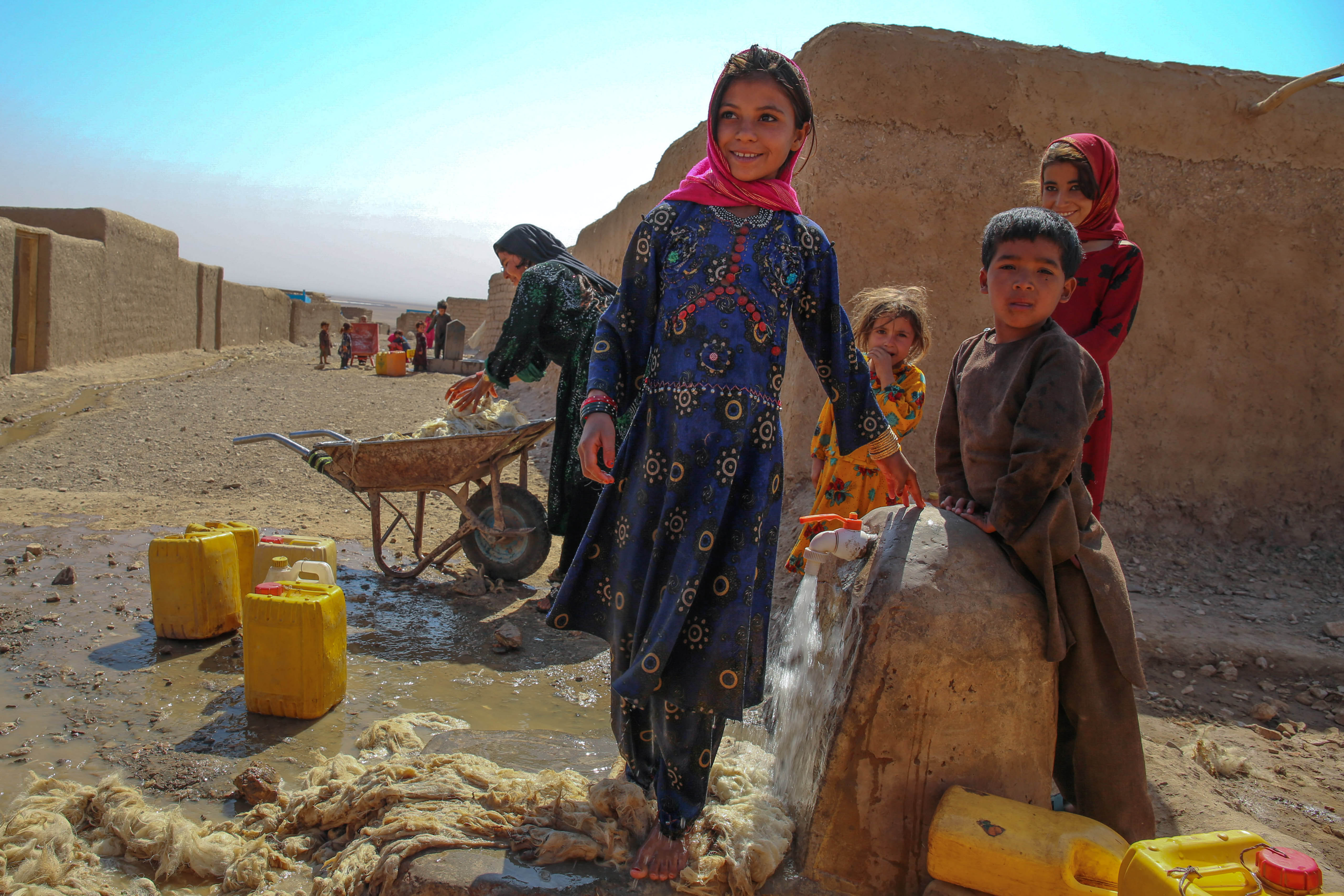 A young girl washes wool at the Shahrak-e-Sabz camp on Oct. 7. Some women and girls in the camp earn meager pay turning wool into yarn; for each kilogram of yarn, the women are paid 50 afghani (65 cents). Lynzy Billing for Foreign Policy

Meanwhile, conditions at the camp are growing worse. More than 2,000 new families arrived between April and June, and the pandemic has further affected the livelihoods of those who rely primarily on daily wages and humanitarian assistance. Shahrak-e Sabz is government-owned land, and the site has no legal recognition. Families are at risk of being evicted. The Norwegian Refugee Council has reported police demolishing homes, evicting families from the land, and in some cases arresting residents.

With international support waning, Afghanistan is on the brink of a humanitarian crisis. As the harsh winter sets in, bringing more patients to the MSF clinic, it will soon face more operational challenges. “The people at the camp rely on this clinic and clinics like ours cannot continue our work without foreign support,” Mohammadi, the midwife, said. “When America leaves, the insecurity will increase and the women will be more desperate for support.”

As Afghans hold their breath for the outcome of the peace negotiations, millions of vulnerable women’s access to the most basic of human services hangs in the balance.

Despite rising violence, some of Afghanistan’s most vital workers are fighting stigma to deliver health care to the country’s mothers.

Lynzy Billing is a journalist and photographer based between Afghanistan and Iraq. Twitter: @LynzyBilling