Here are five of our best pieces on how East Asia handled the pandemic.

From Taiwan to Japan, East Asian states have managed to bring the coronavirus largely under control—thanks in part to experience dealing with the SARS outbreak in 2002. East Asian governments acted faster than the West, but they also benefited from publics that saw masks as a social good while Western experts were busy wrongly arguing that they had little value.

At the same time, though, the pandemic exposed various social fault lines in East Asia, such as Singapore’s prejudice against migrant workers and the role of religion in South Korea.

Here are five of Foreign Policy’s best stories on the region and the pandemic.

From Taiwan to Japan, East Asian states have managed to bring the coronavirus largely under control—thanks in part to experience dealing with the SARS outbreak in 2002. East Asian governments acted faster than the West, but they also benefited from publics that saw masks as a social good while Western experts were busy wrongly arguing that they had little value.

At the same time, though, the pandemic exposed various social fault lines in East Asia, such as Singapore’s prejudice against migrant workers and the role of religion in South Korea.

Here are five of Foreign Policy’s best stories on the region and the pandemic.

1. Fear of China Made Taiwan a Coronavirus Success Story

One of the few clear winners to emerge from the pandemic was Taiwan, which acted before almost any other state and has effectively brought COVID-19 under control. That’s largely because of the island’s experience with SARS, but also because of its innate mistrust of claims by the Chinese authorities. Taiwanese authorities banned flights from Wuhan before any other country, and immediately turned factories over to mask production. “Taiwan has been tackling its coronavirus outbreak despite being frozen out of the World Health Organization (WHO) and continual bullying from China,” Hilton Yip wrote in March. “In short, Taiwan has had to rely on itself to fight the coronavirus.”

Until a single local transmission emerged last week, Taiwan had managed 200 days without a single new coronavirus case among residents. That’s given the country a significant boost on the world stage at a time when, thanks to ever-growing threats from its giant neighbor, it badly needs it.

by William Sposato, May 14

One of the most mysterious pandemic successes in East Asia was Japan’s. The government’s initial response to COVID-19 was largely botched, littered with failed testing programs, indifferently enforced lockdowns, and a string of mistakes and false statements. But for much of the year, coronavirus numbers stayed low anyway. In a piece that was highly popular in Japan itself, long-term resident William Sposato wrote about how existing habits like mask-wearing and lack of close physical contact had helped the nation avoid the worst—despite government ineptitude.

But as Japan’s COVID-19 caseloads rose this December following the arrival of a highly transmissible strain of the virus from the U.K., those good habits may not be enough—and other, less enviable ones may come to the fore. “In contrast to the celebrations for those on the front line elsewhere, nurses and other healthcare workers in Japan have complained of discrimination, bans on their children attending nursery schools, and general disdain from those worried that they are carriers of COVID-19,” Sposato noted. 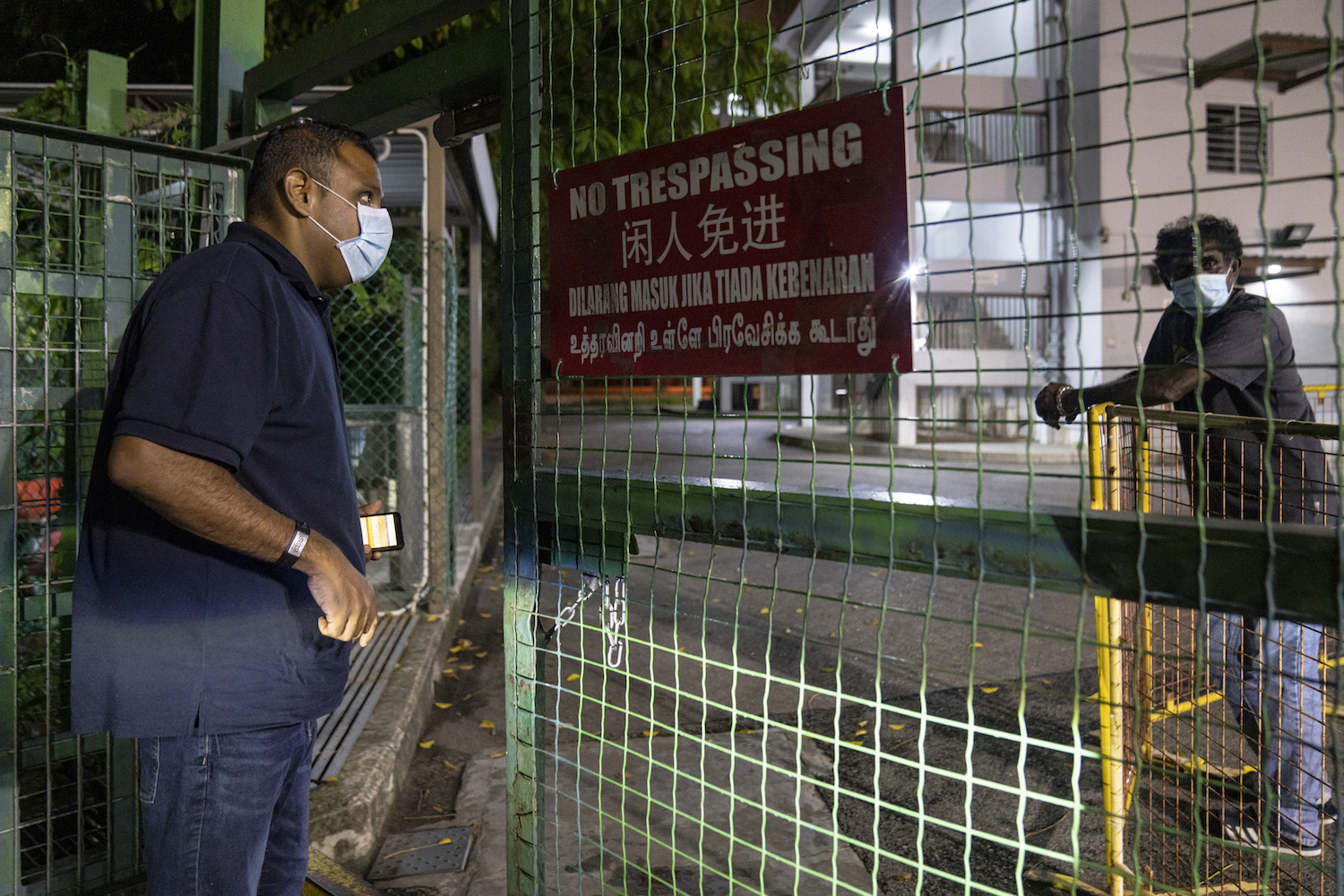 Pastor Samuel Gift Stephen, the founder of the Alliance of Guest Workers Outreach, checks in with a security guard at a factory-converted dormitory as he distributes meals for Muslim migrant workers in Singapore on April 24.

Pastor Samuel Gift Stephen, the founder of the Alliance of Guest Workers Outreach, checks in with a security guard at a factory-converted dormitory as he distributes meals for Muslim migrant workers in Singapore on April 24. Ore Huiying/Getty Images

3. Singapore Is Trying to Forget Migrant Workers Are People

by Kirsten Han, May 6

Singapore’s response was hailed as a model of how to beat the coronavirus early on. The city-state went without lockdowns but mandated tight quarantines for travelers and deployed extensive testing and contact-tracing teams mixed with mandatory cell-phone apps. That approach has largely held up, despite neighboring Malaysia—which had avoided large outbreaks in the spring—now experiencing a serious second wave. But crisis erupted with a fresh outbreak in migrant workers’ dorms in April. Migrant workers are often overlooked or demonized by other Singaporeans, activist and journalist Kirsten Han wrote in May.

“Even before COVID-19 hit the dormitories hard, migrant labor-rights groups were urging the government to come up with measures to address conditions, such as overcrowding and sanitation issues, that leave workers vulnerable to outbreaks of disease,” Han noted. Singapore was able to keep its migrants locked away from the rest of the population, but the coronavirus numbers among them would eventually be revealed to be among the highest in the world: Nearly half became infected by the coronavirus.

As East Asian states’ triumph over the coronavirus became clear, crude cultural explanations were put forward that credited “Confucian values” of obedience and community for national successes. As the Korean American writer S. Nathan Park pointed out in April, coronavirus responses had only become the latest focal point of a long-running form of Western policy critique: claiming that East Asia’s successful policies work only because of its cultural makeup and supposedly homogenous populations.

“It repeats the same mistake that allowed the rampant coronavirus outbreaks in the United States and Europe in the first place: the mistake of seeing Asia as an unrelatable other, a place so fundamentally different from the West that no knowledge or experience is transferable,” Park wrote. As the success of extremely un-Confucian nations like Australia and New Zealand—which acted quickly and learned from the East Asian experience—demonstrates, beating the pandemic is more about good governance and a willingness to learn from others than about cultural makeup.

South Korea’s coronavirus successes were some of the most remarkable, given that the country experienced multiple outbreaks in the early days of the virus—each of which was eventually brought under control. One of the main culprits was Shincheonji, a new religious movement with Christian roots blamed by many for causing a serious outbreak in February. But church members say they were unfairly targeted by mainstream Christian denominations, which are politically powerful institutions in South Korea. While the outbreak started among the church, members claim they tried to cooperate with authorities and were falsely accused of lying.

In August, David Volodzko looked into the case, and found a story more tangled than the easy targeting of an outsider group. “[Common concern over privacy] is how the secretive Christian sect ended up making common cause with the LGBTQ community, through its support of South Korea’s anti-discrimination bill,” Volodzko writes, pointing out the strange alliances forged in the pandemic era, when government intrusion into everyday life became the norm.

NEW FOR SUBSCRIBERS: Want to read more on this topic or region? Click + to receive email alerts when new stories are published on Pandemics, East Asia, Japan, South Korea, Taiwan

From the pandemic to Black Lives Matter and the U.S. election, five articles from the year that changed everything.