Armenia’s disastrous loss to Azerbaijan in the six-week war over Nagorno-Karabakh has left another generation scarred—and a future conflict more likely.

YEREVAN, Armenia—Beneath overcast skies on a desolate hillside, mourners passed each other shovels and took turns heaping earth onto the coffin of the dead soldier.

Leaving behind a wife and daughter, Avetis Avetisyan was 34 when he was killed by an artillery strike in the recent six-week war between Armenia and Azerbaijan over the disputed territory of Nagorno-Karabakh. Here in the Yerablur Military Memorial Cemetery late this past November, empty pits lay alongside his grave, awaiting more fallen from the battlefield. Atop the hill were older, more elaborate gravestones, etched with the faces of soldiers killed during the first Nagorno-Karabakh war of the 1990s. Now, a whole new hillside of graves stretched out.

“Work has never been busier,” said one gravedigger in his late 50s, heaping earth around a new memorial. “Every day more bodies arrive. Every day we dig more graves. The hill is filling up.”

YEREVAN, Armenia—Beneath overcast skies on a desolate hillside, mourners passed each other shovels and took turns heaping earth onto the coffin of the dead soldier.

Leaving behind a wife and daughter, Avetis Avetisyan was 34 when he was killed by an artillery strike in the recent six-week war between Armenia and Azerbaijan over the disputed territory of Nagorno-Karabakh. Here in the Yerablur Military Memorial Cemetery late this past November, empty pits lay alongside his grave, awaiting more fallen from the battlefield. Atop the hill were older, more elaborate gravestones, etched with the faces of soldiers killed during the first Nagorno-Karabakh war of the 1990s. Now, a whole new hillside of graves stretched out.

“Work has never been busier,” said one gravedigger in his late 50s, heaping earth around a new memorial. “Every day more bodies arrive. Every day we dig more graves. The hill is filling up.” 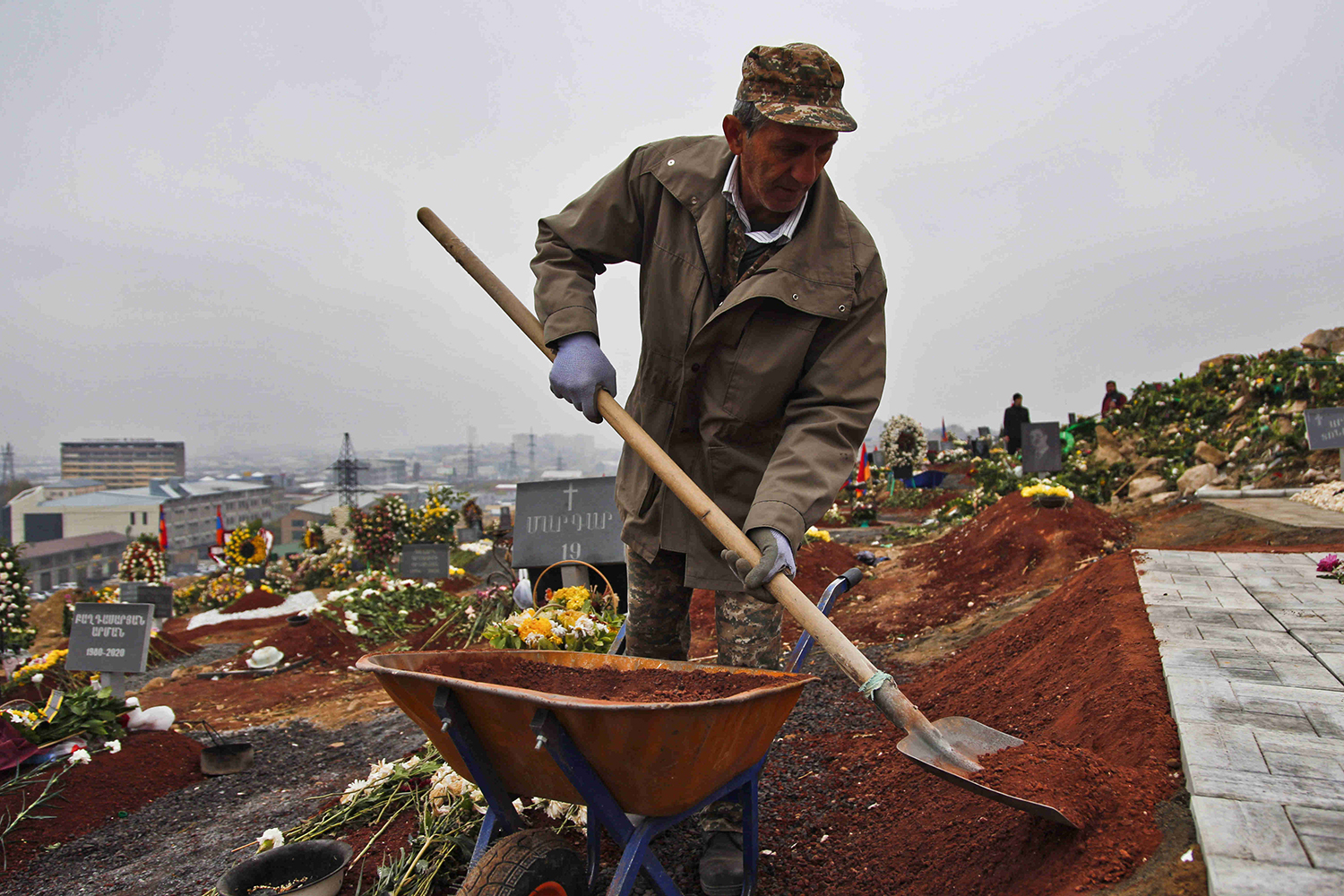 A gravedigger shovels earth around a new memorial at Yerablur Military Memorial Cemetery on Nov. 30, 2020.Jack Losh for Foreign Policy 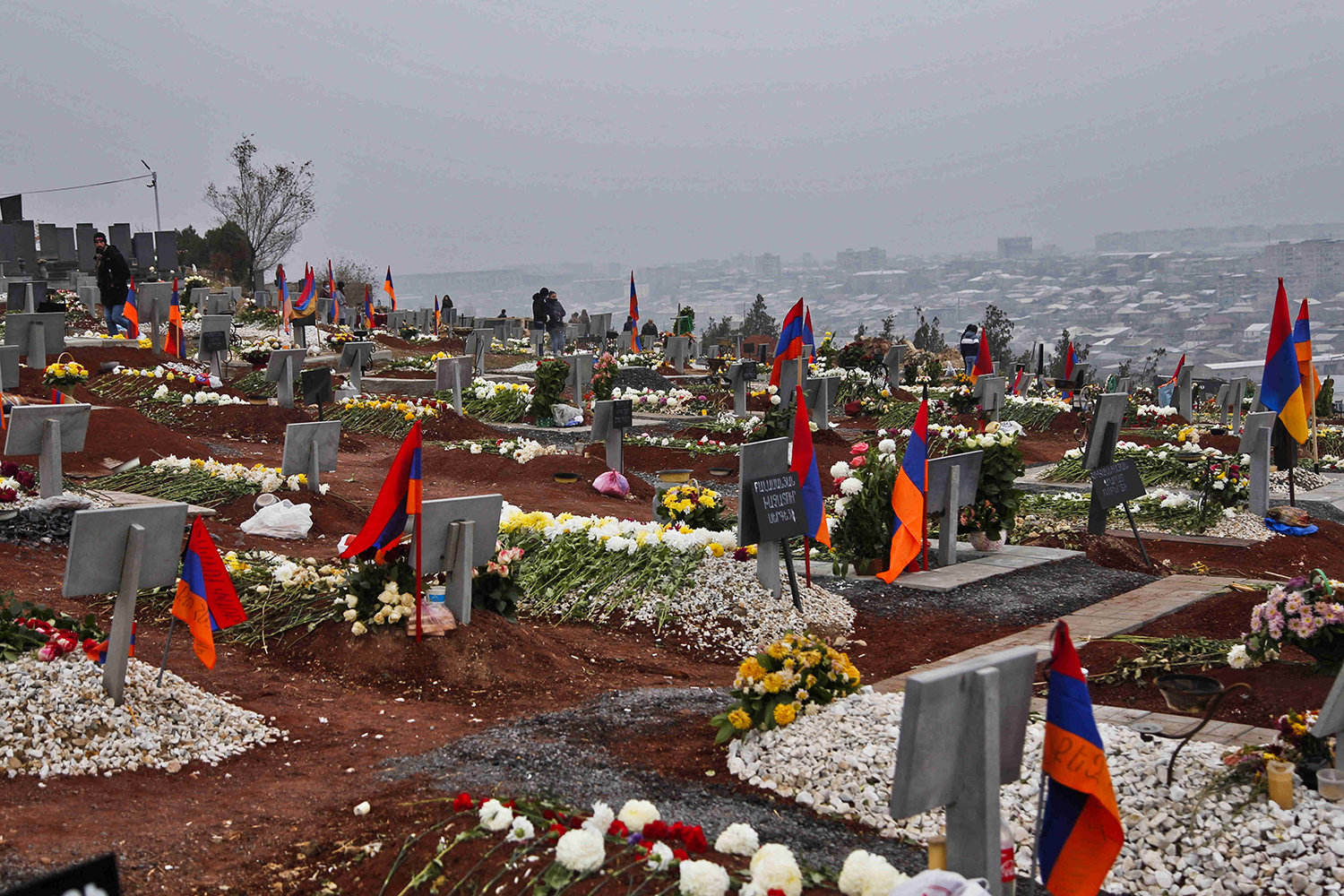 The scene points to a devastating loss of life that, coupled with the humiliation of Armenia’s defeat, will reverberate for years. The impact of just 44 days of warfare has the potential to span generations, deepening a venomous hatred between rival states, propelling the region further down its spiral of militarization and fueling yet more conflict in the future.

For though war has ended, peace has not begun. The root causes of the conflict remain unresolved, while sporadic skirmishes, outrage over war crimes, and fears for those still missing prevent raw wounds from healing. As Armenia’s beleaguered prime minister, Nikol Pashinyan, said ahead of a recent memorial march to the Yerablur cemetery: “The entire nation has been through—and is going through—a nightmare. Sometimes it seems that all of our dreams have been dashed and our optimism destroyed.”

The impact of just 44 days of warfare has the potential to span generations.A Moscow-brokered cease-fire between the two former Soviet republics ended the war in November 2020, authorizing the deployment of Russian peacekeepers to Nagorno-Karabakh and handing back to Azerbaijan most of the territory it had lost to Armenian forces in the first war. As 1994’s cease-fire did with Azerbaijan, the new peace deal leaves Armenia feeling deeply aggrieved and replaces active hostilities with precarious ambiguity.

During its punishing offensive on the disputed territory, Azerbaijan withheld casualty numbers, concealing the true scale of losses. After it began publishing figures last month, the total death toll is now known to stand at more than 5,000 soldiers, roughly distributed among Armenians and Azerbaijanis, as well as several hundred wounded and killed civilians.

The death toll is likely to rise in the coming weeks as the fate of the missing is revealed and remains are gradually retrieved from treacherous terrain littered with mines and unexploded munitions. As winter grips this mountainous region, heavy snow, dense fog, and freezing temperatures are impeding the work of recovery teams, while rain and mud can dislodge mines, making the operations fraught with danger. As of last week, the bodies of around 320 Azerbaijani and over 1,100 Armenian service members have reportedly been collected. 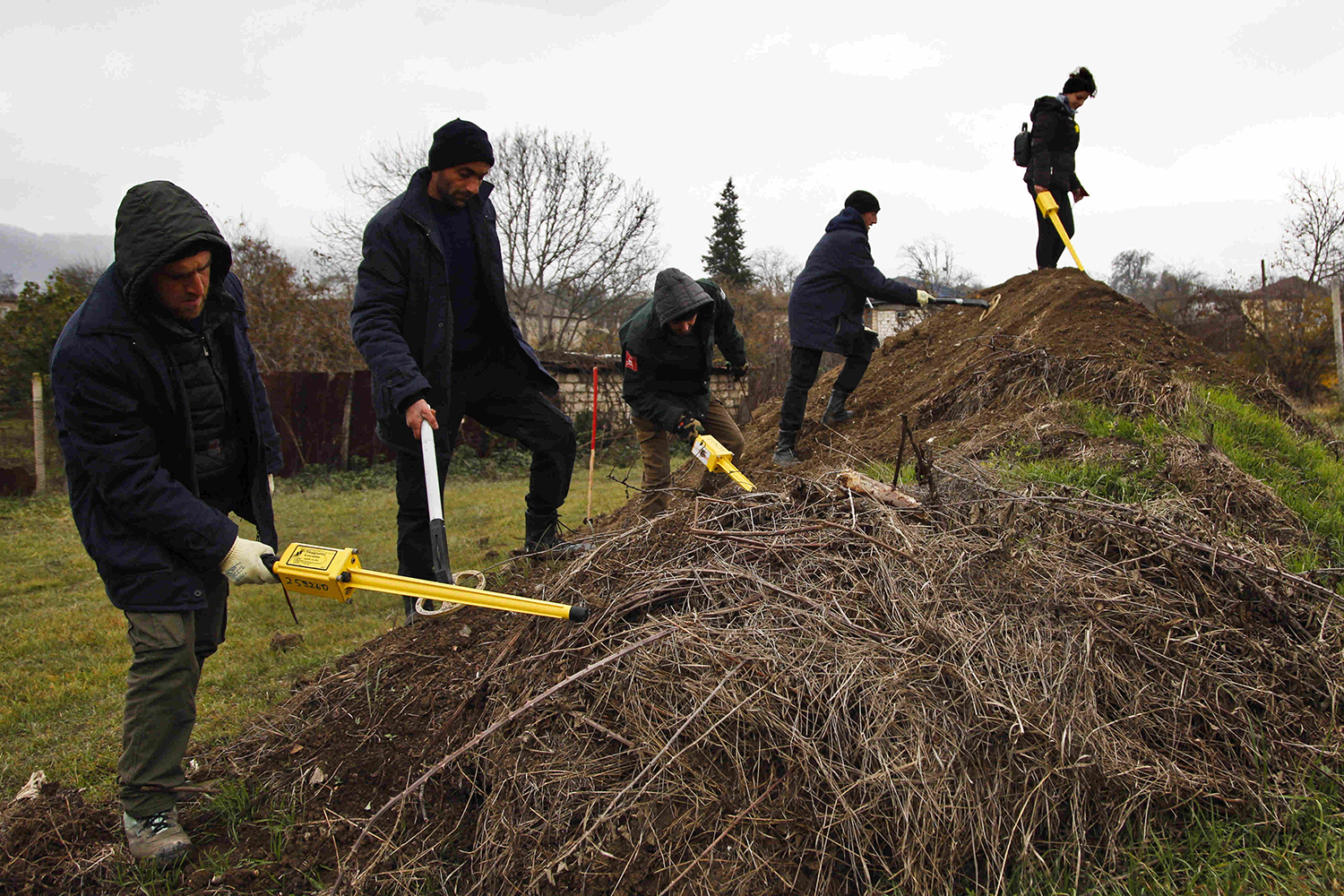 Deminers working for the HALO Trust sweep for unexploded munitions scattered throughout the village of Aygestan in Nagorno Karabakh on Dec. 3, 2020. Jack Losh for Foreign Policy 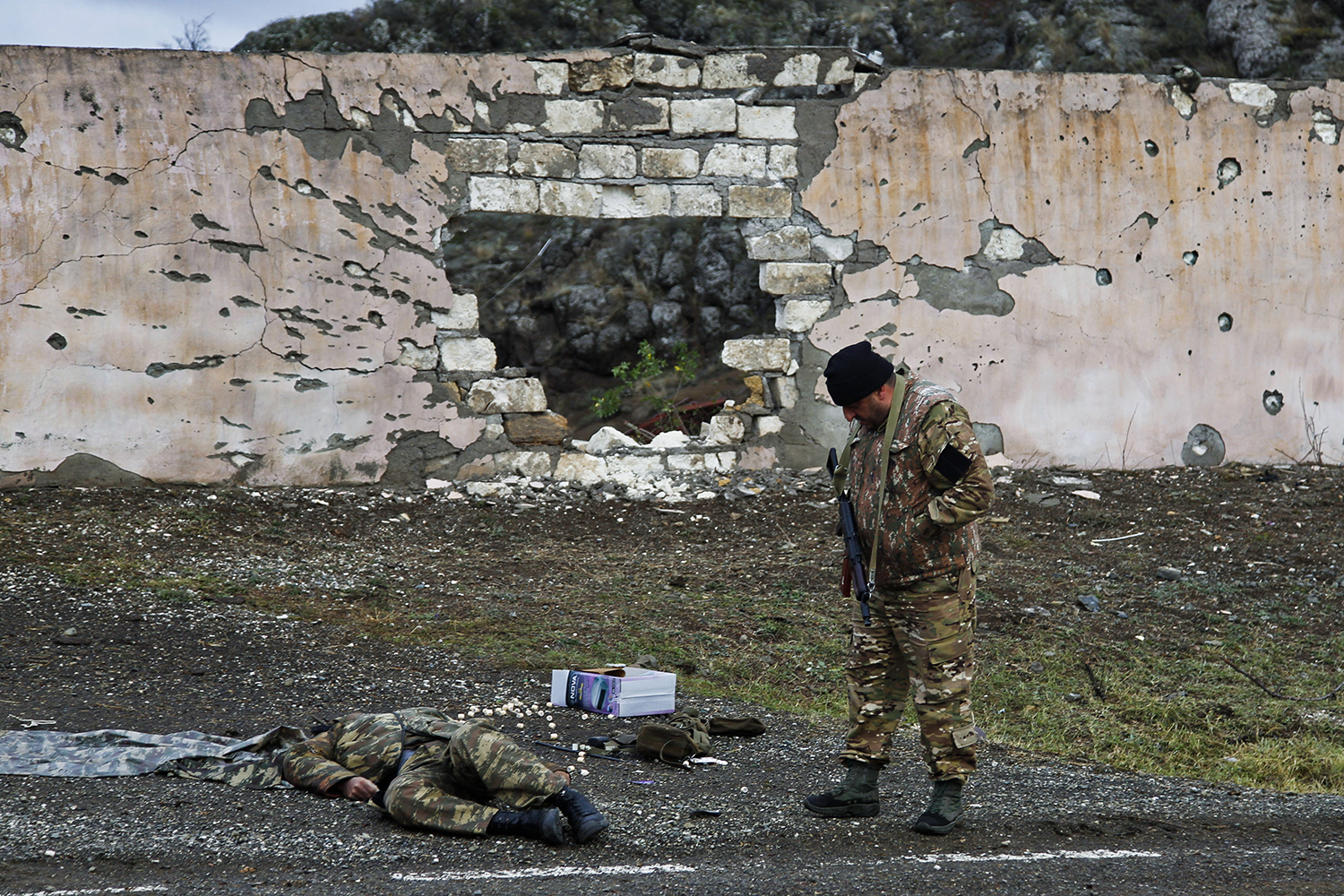 An ethnic Armenian soldier looks at a body of a soldier killed fighting on behalf of Azerbaijan on the highway connecting Stepanakert and Shushi in Nagorno-Karabakh on Nov. 13, 2020. Jack Losh for Foreign Policy 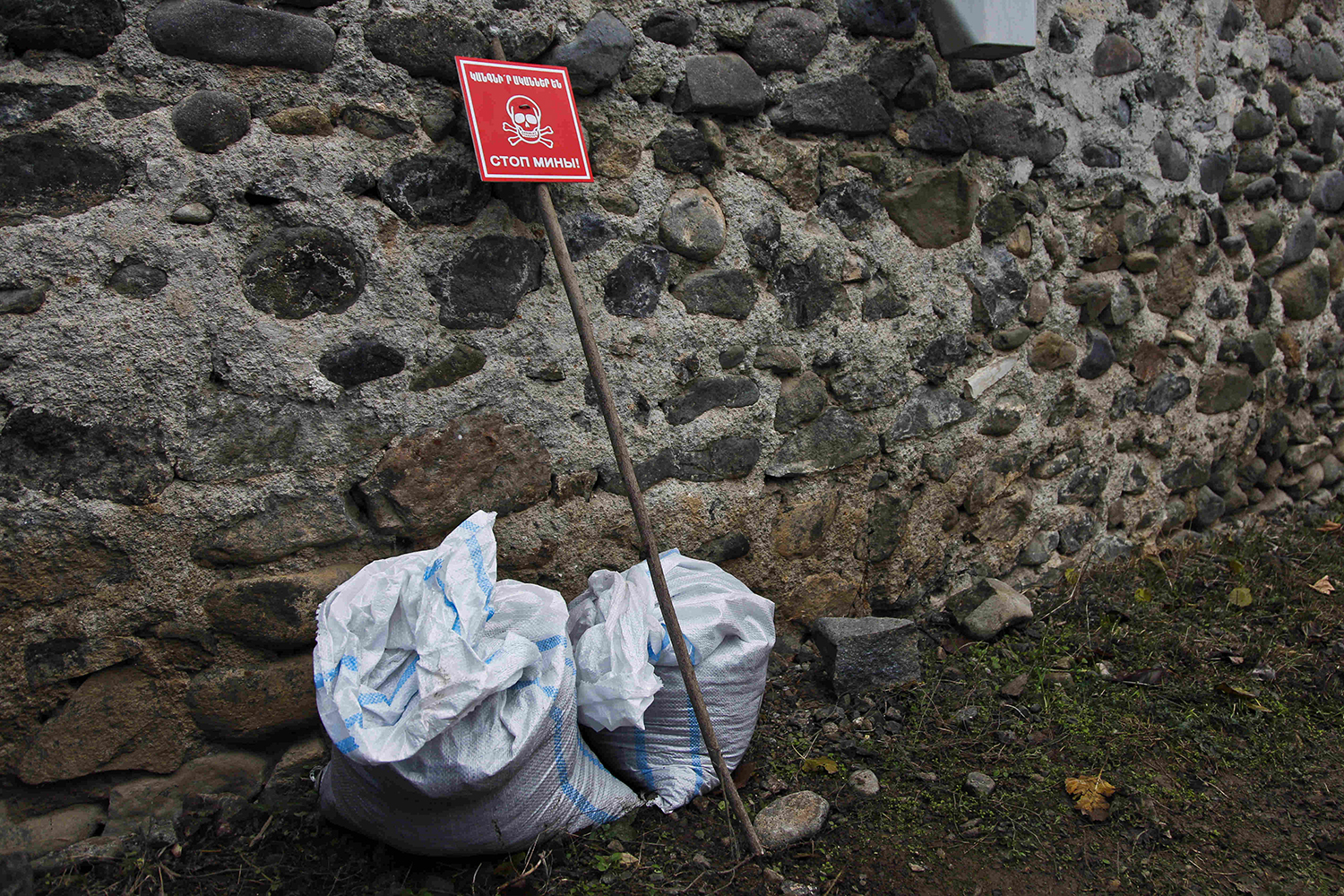 A skull-and-crossbones sign saying “Stop Mines” is placed next to sandbags encasing an unexploded cannon round in the village of Aygestan on Dec. 3, 2020. Jack Losh for Foreign Policy

Despite the grief, families mourning the fallen like Avetisyan at least have the possibility of closure. Those whose relatives remain missing are plunged into a harrowing limbo.

“They long to know what has happened to their loved ones or to bury the dead with dignity,” said Jason Straziuso of the International Committee of the Red Cross, which, along with Russian peacekeepers, is facilitating the recovery of bodies and the transfer of prisoners of war.

Unidentified corpses lie in morgues awaiting a DNA match before they can be handed over for burial. “Many families are enduring an agonizing wait,” Straziuso said.

That wait has been exacerbated by the emergence of horrific videos depicting war crimes and the widespread mistreatment of prisoners.

That wait has been exacerbated by the emergence of horrific videos depicting war crimes and the widespread mistreatment of prisoners. Circulating on the Telegram messaging app, most videos appear to show atrocities being committed by Azerbaijani soldiers who have tortured and executed Armenian prisoners. A smaller number of videos show Armenian forces committing war crimes, from mutilating war dead to murdering an Azerbaijani border guard by cutting his throat.

One video shows a struggling, shirtless male civilian held down by a group of Azerbaijani soldiers before being decapitated with a knife as onlookers clap and cheer. The victim’s head is placed on the nearby carcass of a pig as a soldier says in Azerbaijani: “This is how we take revenge for the blood of our martyrs.”

In another incident, two Azerbaijani soldiers pin down an older man in civilian clothes who begs for his life before his throat is cut. Separately, a captive Armenian serviceman is forced to say “Karabakh is Azerbaijan,” before his dead body is seen impaled on a wooden stick.

Desperate relatives of missing soldiers last month marched on Armenia’s defense ministry to demand information. As they gathered outside, one father said he had not heard from his wounded son since the start of October 2020, less than a week into the war.

“We don’t know his location, his status—we don’t know anything,” he said. “We’ve asked everywhere. … They’re not telling us anything.”

As cold fog enveloped the rally, one woman shouted: “Why don’t they just come out and tell us what we have to do to get our kids back? We’ll spend our own money to bring them home.” 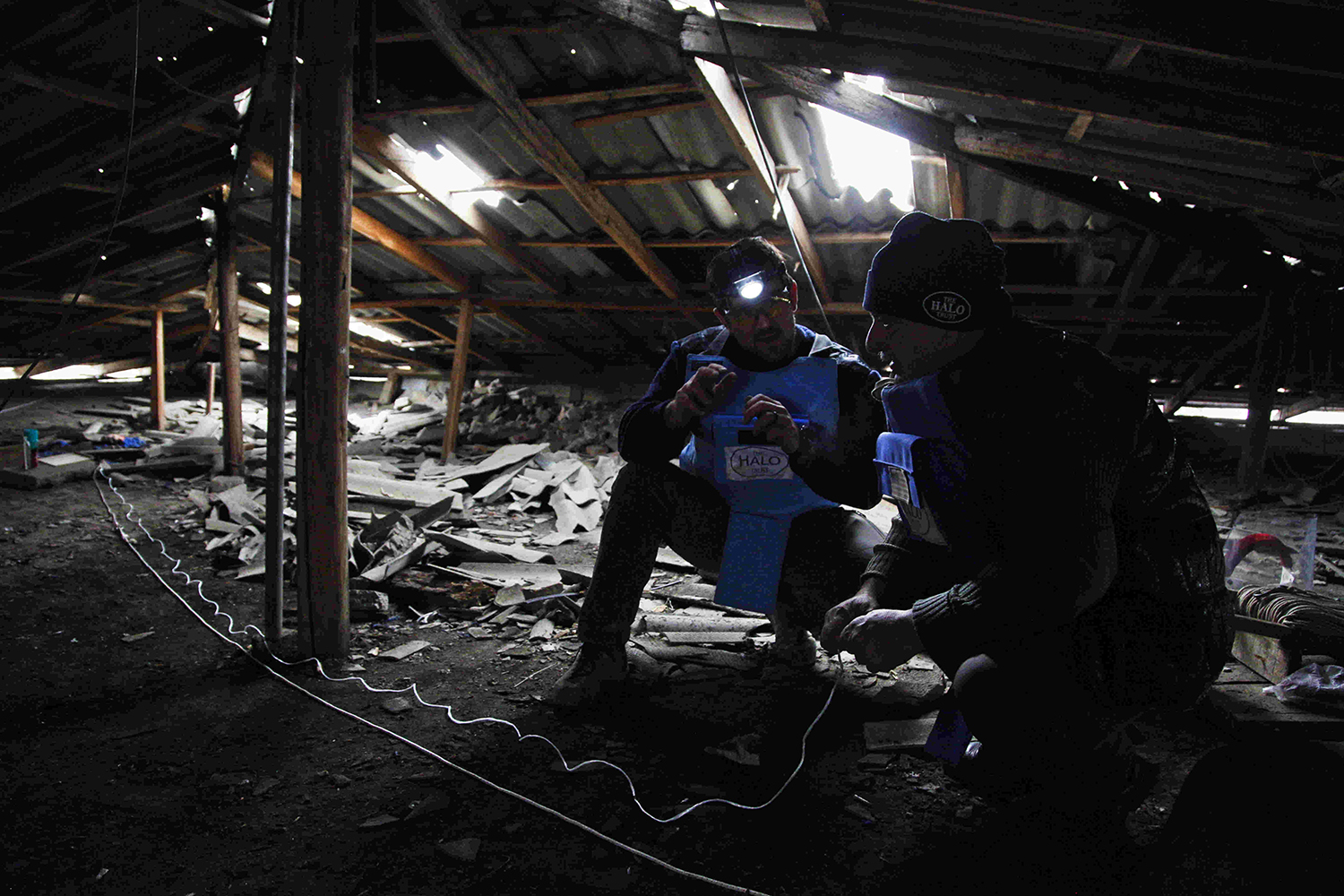 Two specialists from the HALO Trust humanitarian demining group prepare to remove an unexploded cluster bomb from the roof of an apartment block in Stepanakert, Nagorno-Karabakh, on Dec. 3, 2020. Jack Losh for Foreign Policy

Armenia and Azerbaijan’s agreement to an “all for all” POW exchange has prompted some hope. By the end of last month, 56 Armenian and 16 Azerbaijani captives had returned home, ending the nightmare endured by their families. Yet an unknown number of POWs are still behind bars. Armenian officials say Azerbaijan is holding more than 100 Armenian military personnel and civilians, reportedly far more than the number of Azerbaijani prisoners in Armenian custody. Hundreds more remain missing.

The International Committee of the Red Cross, which acts as a neutral intermediary and monitors the treatment of prisoners, said that it had visited dozens of POWs and logged hundreds of tracing requests for both civilians and soldiers, but it declined to disclose precisely how many detainees it had registered.

As war-crime videos have continued to surface, Azerbaijan last month arrested two of its soldiers accused of mutilations and called on Armenia to take similar steps—though the integrity of its investigations are doubtful. Azerbaijani President Ilham Aliyev’s coterie maintain a firm grip on the country’s criminal justice system, in which torture and impunity for the perpetrators of such abuse are endemic. But justice will be a bedrock for any sustainable peace, said Arman Tatoyan, Armenia’s human rights ombudsman. 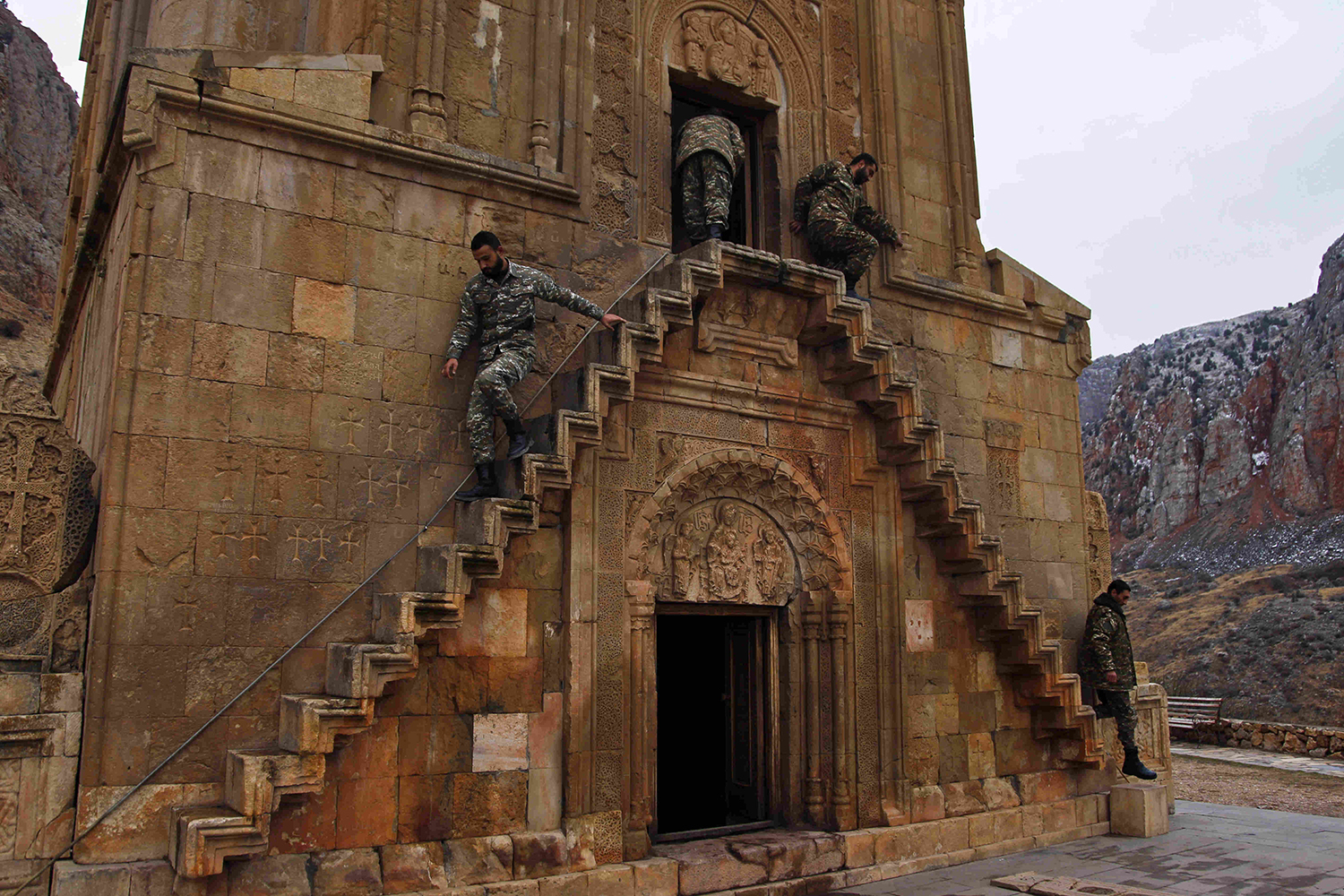 Armenian soldiers descend from the ancient monastery of Noravank after saying a prayer at the altar on Dec. 7, 2020, before heading back to their positions on the border with Nakhchivan, a landlocked enclave controlled by Azerbaijan. Jack Losh for Foreign Policy

Others see forgetting as the foundation of any future peace. Ahmad Shahidov, who runs the Azerbaijan Institute for Democracy and Human Rights in Baku, caused outrage last month with a provocative tweet that implied Armenian people were “a disease”—a post later deleted by Twitter for violating its rules against “hateful conduct.” He also praised the use of a “military solution” to the dispute and called for “a new war” to create a buffer zone.

Shahidov now says he was wrong to use such vitriolic language, but he has since repeated it and held it up as a consequence of what he deemed “Armenian terrorism.” Peace in the region, he argued, could only be achieved through a process of collective amnesia, rather than accountability.

“If we start talking about justice, Azerbaijan has a lot to talk to Armenia about,” said Shahidov, citing 1992’s brutal massacre of hundreds of Azerbaijani civilians in the town of Khojaly. “If we want to live together in the future, we must forget these negative cases. If we think and talk about these negative cases that happened on both sides, we will never get peace. Let’s start everything from zero—it’s a better solution.”

Starting from zero might be hard amid the flood of disturbing videos of torture and atrocities.

“Social media is full of violent scenes,” Tatoyan said. “Even among our children it has already taken effect. All of the time they’re talking about violence, killing, torture. Torture generates hatred. It is very dangerous in terms of living together in this region as two nations.”

Almost two months after the cease-fire, distrust and hostility remain high. Several skirmishes have broken out in recent weeks, causing casualties and straining Moscow’s peace deal. Aliyev’s comment on the recent capture of over 60 Armenian soldiers—“They cannot be considered prisoners of war; they are terrorists”—risks stalling POW swaps. 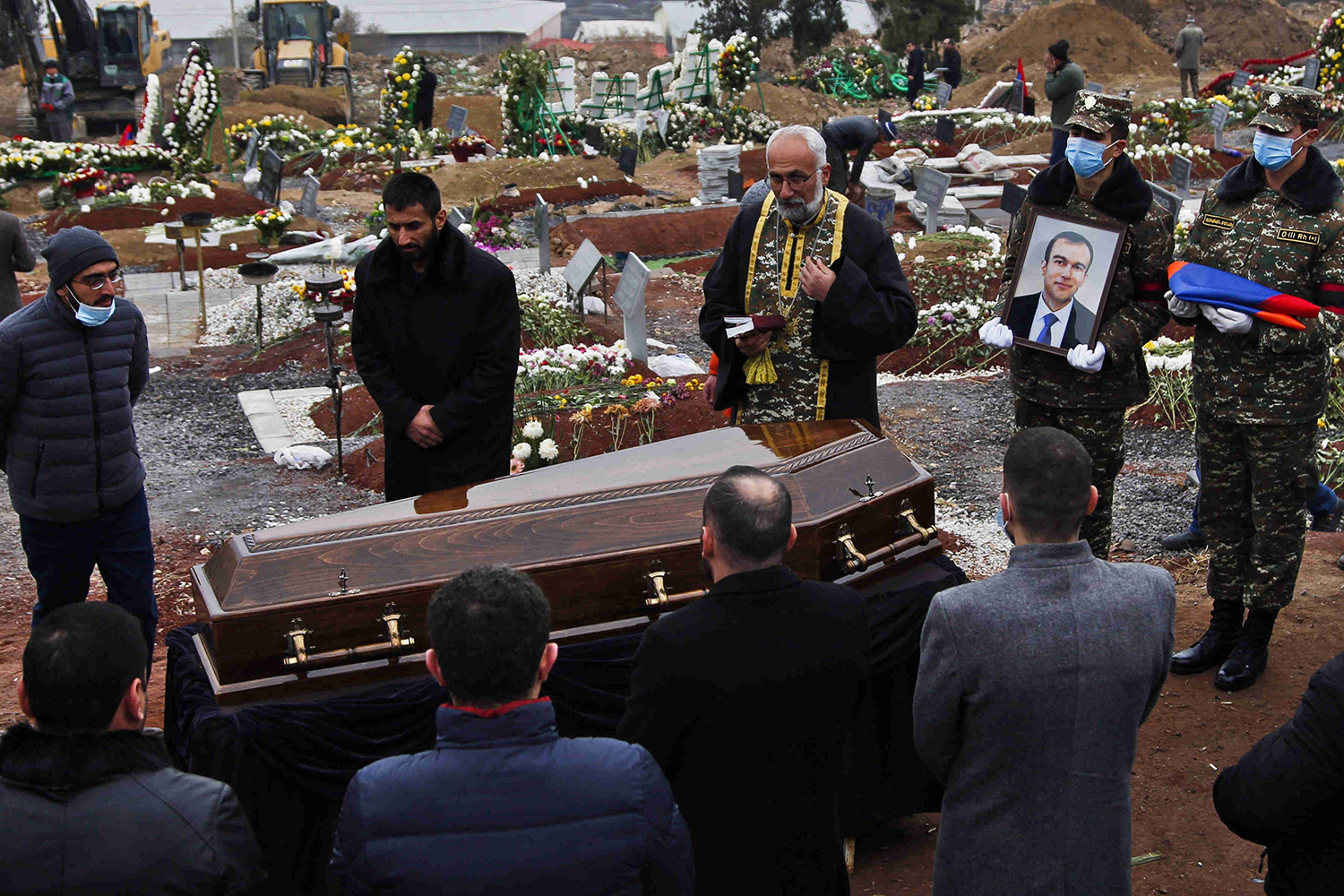 Mourners gather at Yerablur Military Memorial Cemetery on Nov. 30, 2020, for the funeral of Avetis Avetisyan, an Armenian soldier who was killed by an artillery attack in Nagorno-Karabakh. Jack Losh for Foreign Policy

For now, there are bodies to count and bodies to bury. Back in the Yerablur military cemetery, the men finished laying Avetisyan to rest. “We miss him terribly,” said Arman, one of the mourners, who asked not to give his last name. “He was a close friend. Everyone here has been touched by the war. My son’s friend is still missing in action. We don’t know if he’s alive or dead.”

Flowers were placed, and the men turned to depart. Across the hillside of headstones, more bereaved families were already arriving.