An opportunity for Biden, populism’s online fires, and the need for transitional justice.

President-elect Joe Biden has appeared to sense his opportunity amid outgoing President Donald Trump’s collapse. On Thursday, the day after violence engulfed the the U.S. Capitol, Biden delivered a double whammy to Republicans by announcing Merrick Garland as his nominee for attorney general and dispensing veiled hits at Trump in his post-mob speech.

Meanwhile, as the failed insurrection shows, the global ambitions of foreign-policy elites are divorced from reality, which is that the United States has become what its leaders so often decry: a weak democracy unable to prevent violence from marring the transition of power from one leader to the next.

And a dissent cable signed by dozens of U.S. State Department officials reflects mounting anger within the department over the Trump administration’s response to this week’s events. 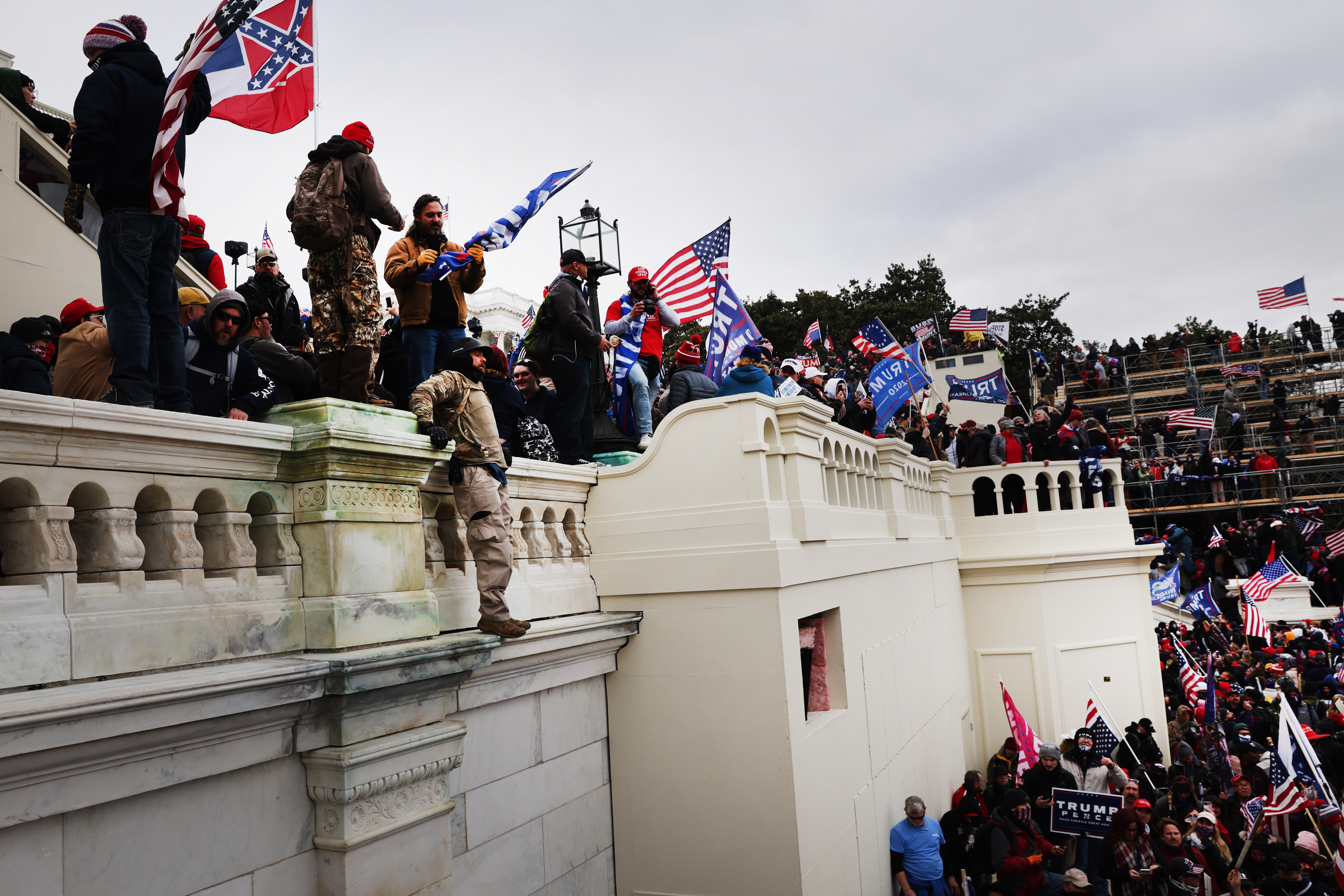 As Republicans desert Trump in droves in the wake of the siege on the U.S. Capitol and talk of impeachment grows louder in Washington, Biden has seized the moment to pledge a restoration of American values, Foreign Policy’s Michael Hirsh writes. 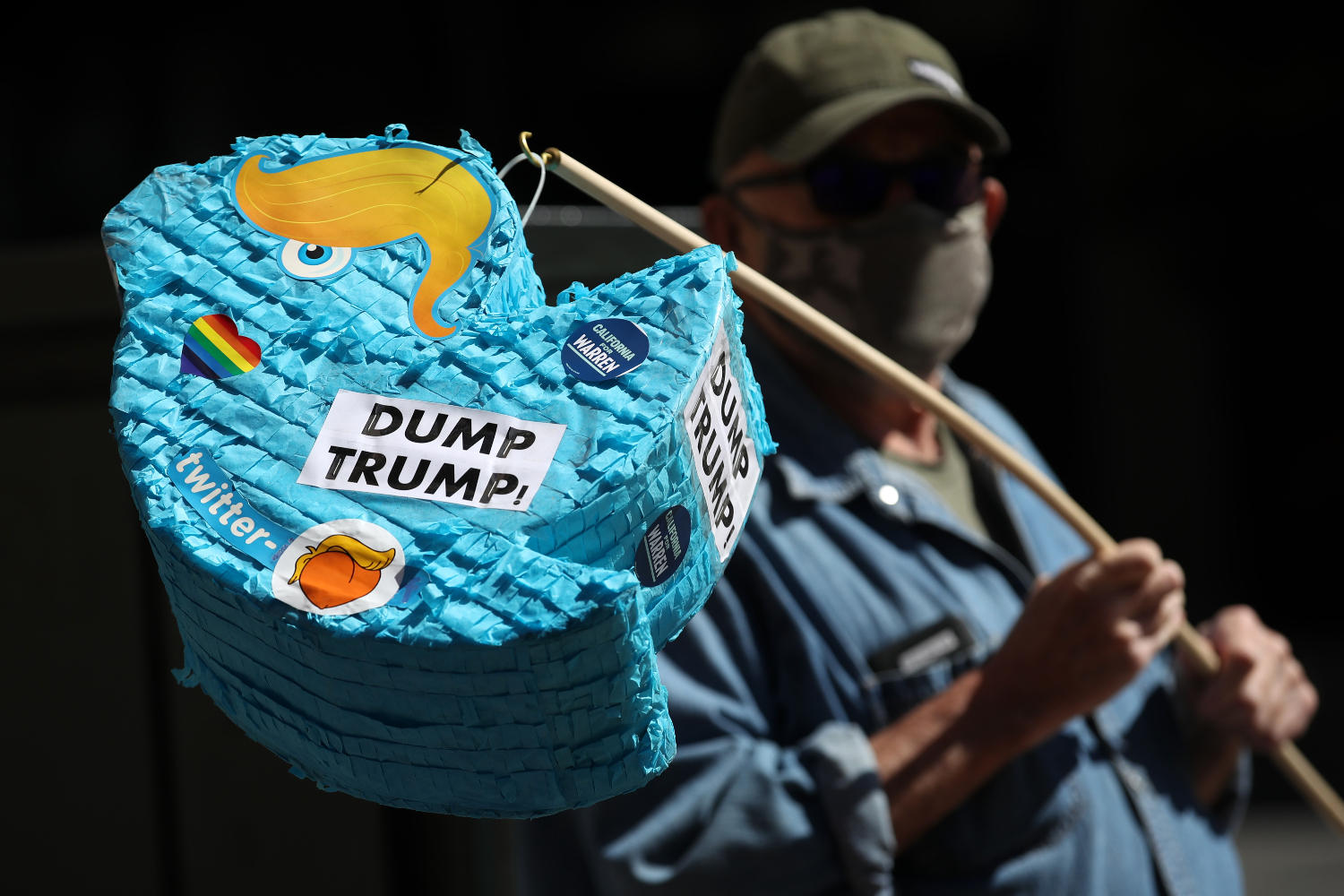 The activist Mike Merrigan holds a piñata shaped like the Twitter logo with hair to look like U.S. President Donald Trump during a protest outside Twitter headquarters in San Francisco on May 28, 2020. Justin Sullivan/Getty Images

Political actors like Trump who benefit from manufacturing hate on social media for political benefit are unlikely to disappear. The only solution may lie in regulating the medium—not the messenger, Nikhil Pahwa writes. 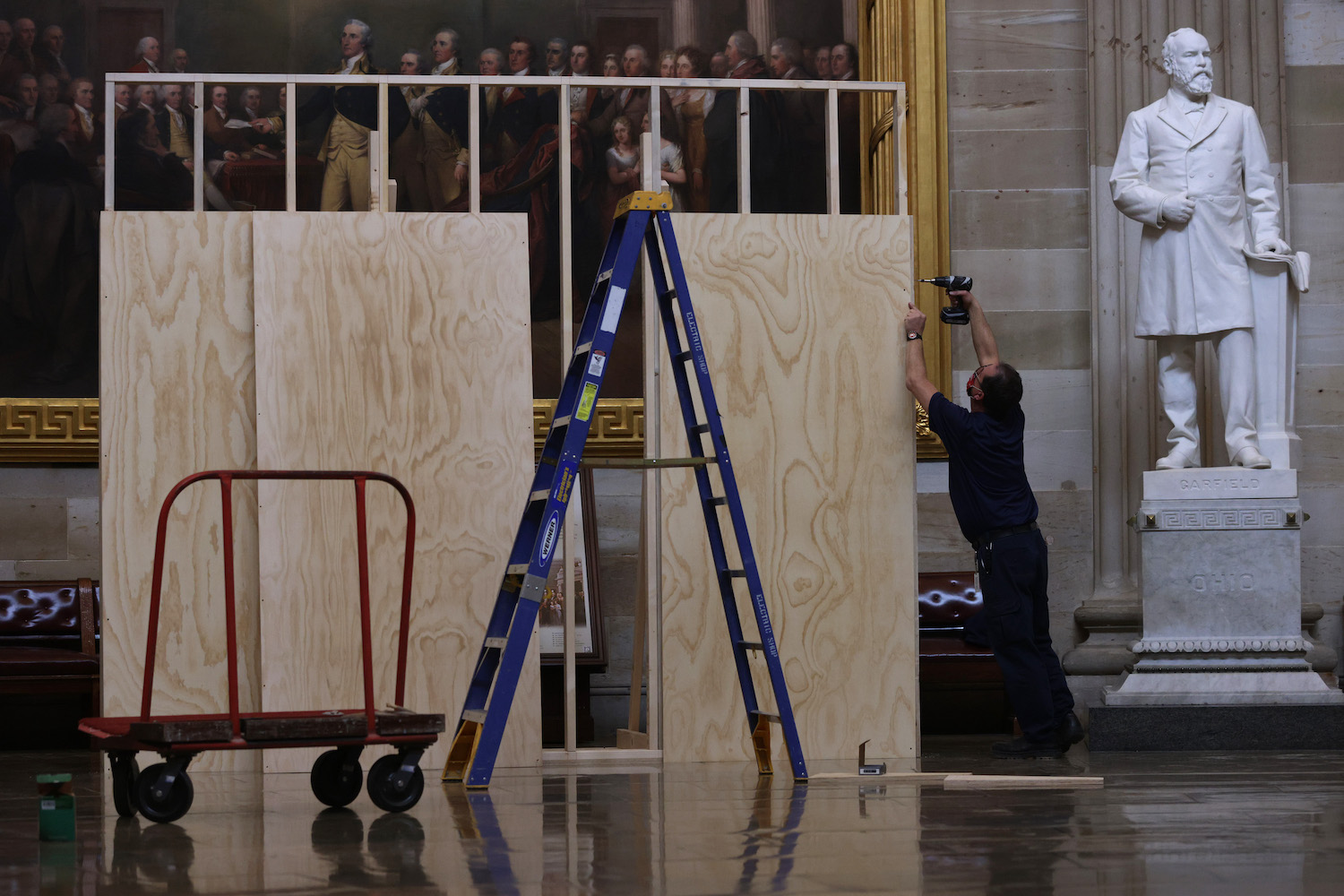 A worker builds a wooden structure, part of the preparation for the presidential inauguration, at the Rotunda of the U.S. Capitol on Jan. 8 in Washington. Alex Wong/Getty Images

3. ‘This Is Not Who We Are’ Is a Great American Myth

The assault on the Capitol shows that it is well past time for the United States to confront its troubling past and present of anti-democratic behavior and racism. Transitional justice can help the country address these two pressing issues, Kelebogile Zvobgo writes. 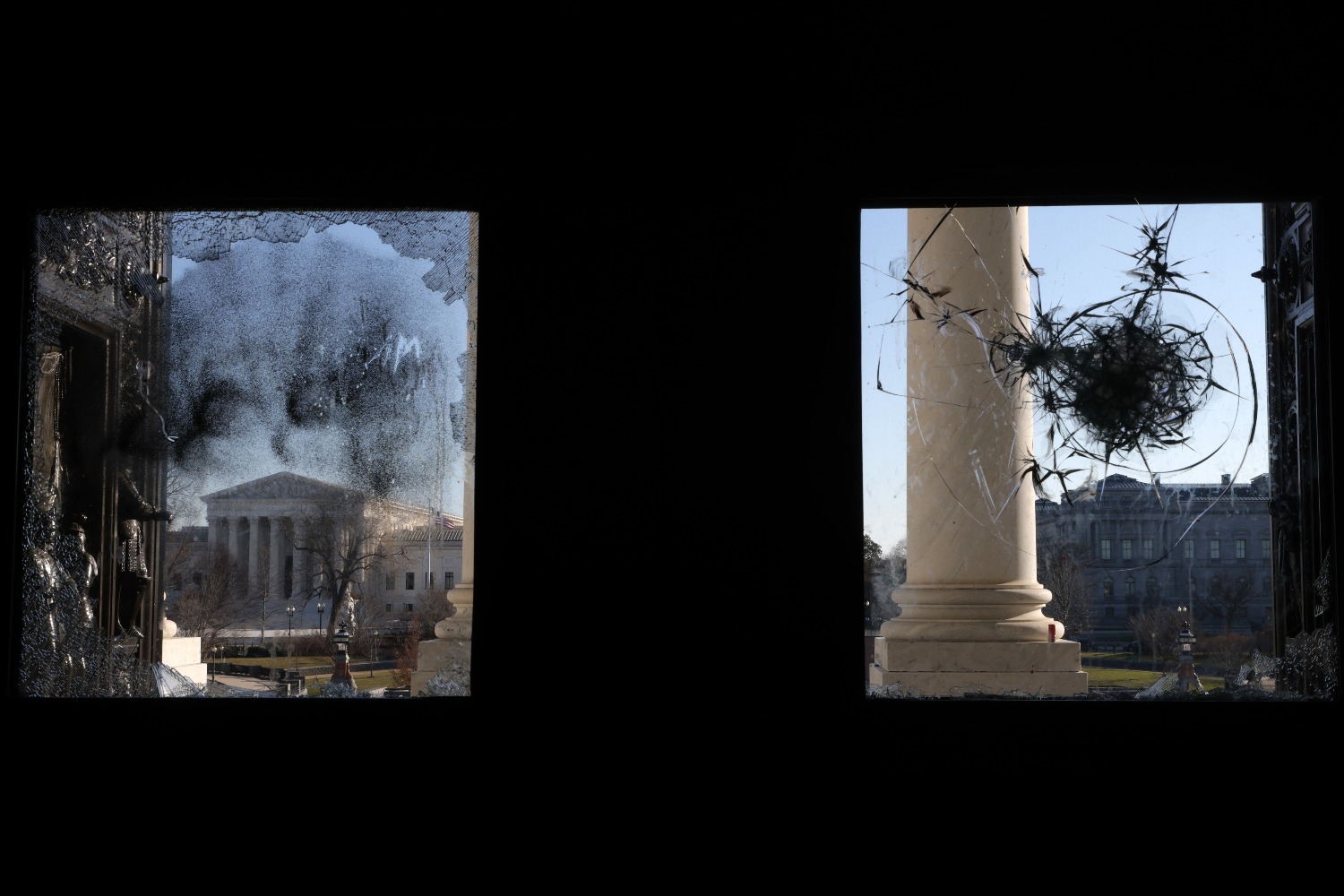 The U.S. Supreme Court is seen through a damaged entrance of the U.S. Capitol in Washington on Jan. 7.Alex Wong/Getty Images

4. America Can’t Promote Democracy Abroad. It Can’t Even Protect It at Home.

It’s a sign of how broken U.S. foreign-policy debates are that the primary reaction from many commentators after the Capitol insurrection was to worry about America’s moral authority and global leadership, Emma Ashford writes. 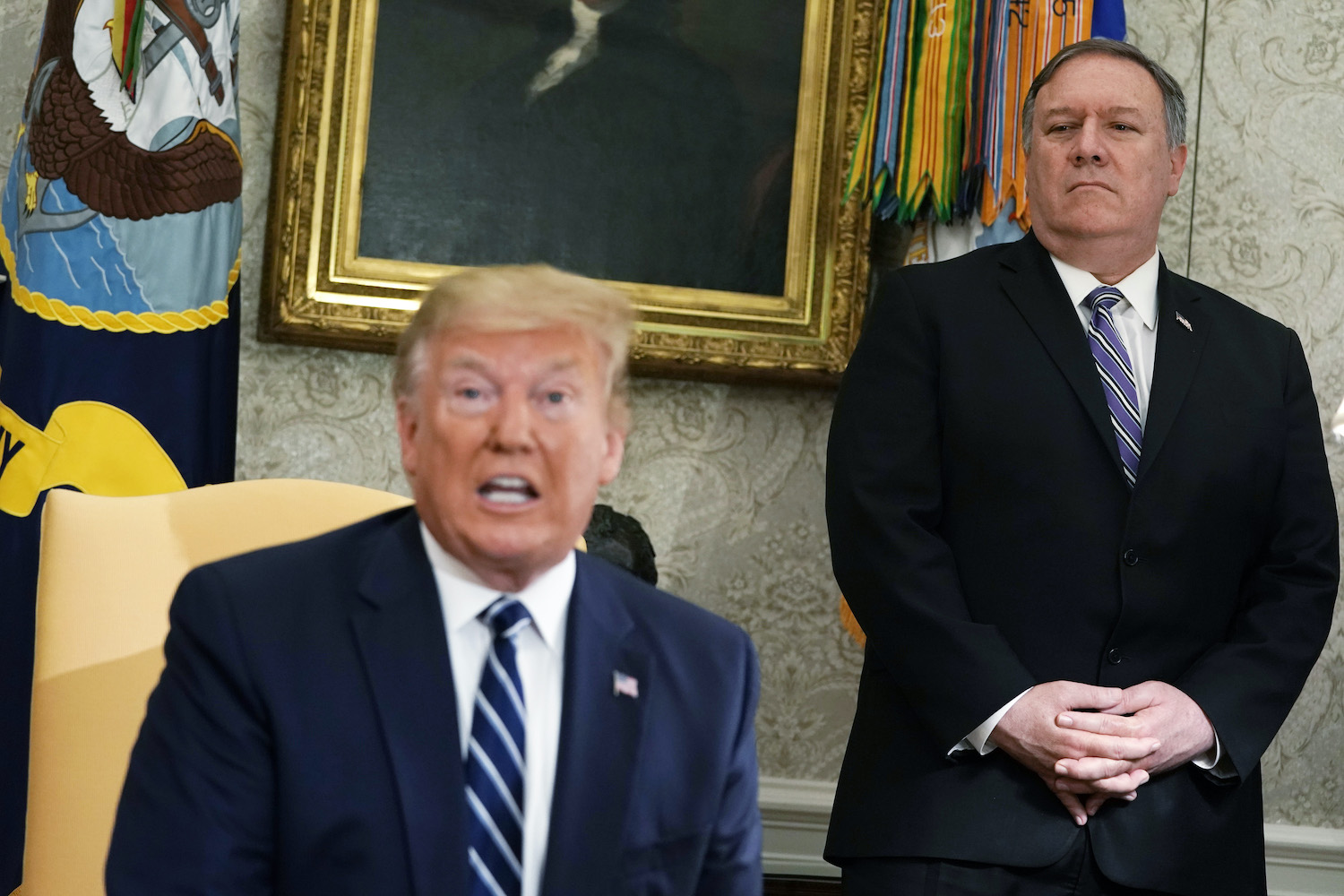 U.S. Secretary of State Mike Pompeo looks on as President Donald Trump speaks during a meeting with Canadian Prime Minister Justin Trudeau in the Oval Office of the White House on June 20, 2019.Alex Wong/Getty Images

Dozens of State Department officials are filing a formal dissent cable directed at U.S. Secretary of State Mike Pompeo for the department’s gag order on public messaging about the violent pro-Trump mob this week, Robbie Gramer and Colum Lynch report.

The Summit That Can’t Fail