China Puts Millions of People Back Under Lockdown

As authorities push to keep the country largely coronavirus-free, restrictions take effect in the province around Beijing.

The highlights this week: A small coronavirus outbreak in Hebei province puts more than 22 million people back under lockdown, Chinese state media doubles down its U.S. criticism over the Capitol assault, and the United States widens its ban on Xinjiang products, including cotton and tomatoes.

As Chinese authorities struggle to keep the country’s coronavirus-free status mostly intact, a new outbreak has left more than 22 million people under lockdown. Over the past few weeks, China has reported 109 cases per day—a tiny fraction of the 250,000 daily cases in the United States but a serious concern in a country whose leaders understand exponential growth.

The outbreak is concentrated in Shijiazhuang, the provincial capital of Hebei province, which surrounds Beijing. Shijiazhuang is a critical transport and manufacturing hub for the region. As a result of its close proximity to the outbreak, parts of the capital are now under lockdown, too.

The lockdown is likely to widen, for two reasons. First, there are concerns about more contagious variants of the virus getting a foothold in China, such as the one that originated in the United Kingdom. While China still imposes significant restrictions on travel and a mandatory supervised quarantine period, there is enough movement, especially overland, to make that a plausible fear.

Second, the Lunar New Year—the most important annual festival for Chinese families—is approaching on Feb. 12. Last year, the coronavirus erupted just before the holiday. Making sure people don’t have to spend another festival week in lockdown by crushing the outbreak now is critical, both for China’s own public relations and for the benefit of the domestic economy. The Lunar New Year is a big spending week.

Another blow. Beijing suffered another setback this week after the Chinese-developed COVID-19 vaccine proved far less effective than its foreign counterparts. The vaccine was already lagging behind in trials, in part because China’s relative coronavirus success left it with a smaller pool of data to draw on, forcing it to outsource to countries such as Brazil.

But at 50.2 percent efficacy, the final product is only just over the standard for deployment. Earlier results claimed higher efficacy, but the Brazilian trial authorities downgraded the results when applying better standards.

Chinese state media is trying to spin the failure as a success, but it is a big hit for Beijing as vaccine diplomacy heats up and countries without homegrown efforts seek to inoculate their populations. China has already promised tens of millions of doses to Belt and Road countries, but elites in those countries are now likely to seek more effective U.S. or European vaccines.

It’s likely that China will try to develop a second vaccine using the techniques that were so successful in the United States—and possibly by reverse-engineering other countries’ technologies or stealing intellectual property. By that point, it will hopefully be less needed.

“But in America…” Chinese state media is still focused on the dysfunction revealed by the assault on the U.S. Capitol last week. As with Soviet propaganda about U.S. racism, Chinese propaganda is most effective when it goes after genuine U.S. failings. But the media has bent the Capitol story significantly toward Beijing’s own needs. Emerging themes include the chaos of democracy, the righteousness of China’s own censorship, and that the United States is making a mistake by going after China instead of fixing its domestic problems.

One theme has especially resonated, though: guns. Like most of the world, the Chinese public views the U.S. attitude toward firearms with horror. The sight of armed marchers baffles people, and Republican representatives’ intransigence around metal detectors on Tuesday attracted online jeering. In China, the issue has tragic salience in the death of Yiran Fan, a talented Ph.D. student in Chicago who was killed on Jan. 9 during a gun rampage.

Biden builds his team. Kurt Campbell, a respected and experienced diplomat, will be the new Indo-Pacific coordinator for U.S. President-elect Joe Biden’s National Security Council (NSC), one of a number of regional positions. Campbell is a sober-minded assessor of the challenges posed by China. Joining him on the NSC is Rush Doshi, a younger scholar and the co-author of an important piece with Campbell on China’s challenges.

Doshi’s Foreign Policy piece on Beijing’s beliefs about President Donald Trump and the end of U.S. hegemony seems particularly relevant to the moment.

Conspiratorialism grows. After a flurry of potential foreign villains from Venezuela to Italy, Trumpist conspiratorialism around the results of the U.S. election has clearly settled on the Chinese Communist Party (CCP) as the villain. Of course, the conspiracy theorists’ primary enemies are domestic, but the combination of China’s growing power and the coronavirus pandemic made the CCP an obvious bogeyman, as did the role of Falun Gong media in the far-right ecosystem.

I predicted this would happen—but I thought that the president himself would push the connection more directly. Instead, the theory has emerged largely from the grassroots of QAnon and similar movements. CCP influence operations do exist in the United States, but most of them involve bullying and threatening the diaspora community.

Xinjiang product ban. The United States has widened its ban, previously limited to Xinjiang’s paramilitary settler corporation, to all cotton produced in Xinjiang—and tomatoes, too, for good measure. The ban amounts to $9 billion worth of cotton imports and $10 million of tomato imports. While the ban only applies to Xinjiang production, it will be impossible in practice to disentangle Chinese supply chains in which Xinjiang plays a massive role.

China makes extensive use of forced labor in Xinjiang, sending Uighurs, including professors, teachers, and doctors, from the internment camps directly to nearby factories to serve as slave workers. Numerous clothing lines have already announced that they will cease using cotton from the region.

Censorship dilemmas. A flurry of ill-informed conservative pieces in the United States have compared Twitter and Facebook’s limitations on Trump’s incitement to Chinese censorship. This is, of course, nonsense: Private firms refusing to give the president a platform is the reverse of what happens in China, where government censorship is ordered from the very top.

But the interpretative role played by private companies is worth studying in both cases.

In China, the burden of censorship is placed on private firms, which typically employ about one-third of their staff in content management toward the government’s stated ends. In the United States, meanwhile, the lack of government direction and the disinformation campaign pushed by Trump and his allies himself have left private firms scrambling to address crises with a total lack of guidance from the authorities.

Digital crackdown. China’s assault on Hong Kongers’ freedoms continues, with digital tools as the new target, following the arrests of pro-democracy figures last week. Hong Kong protesters made extensive use of apps such as Telegram to avoid surveillance in 2019 and 2020, and the authorities are gradually introducing the same online controls and restrictions on devices that have killed online dissent in China. 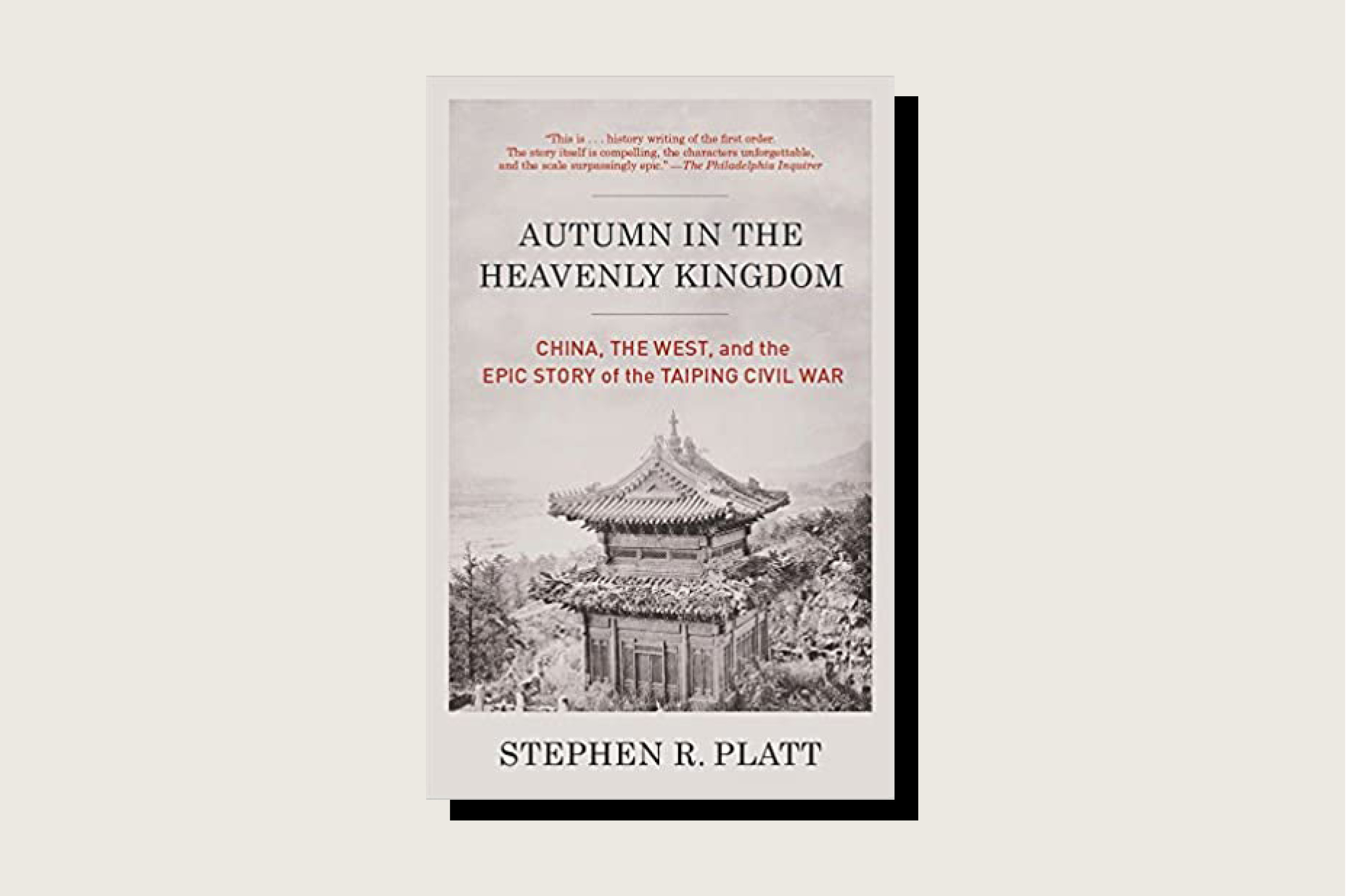 Autumn in the Heavenly Kingdom: China, the West, and the Epic Story of the Taiping Civil War, Stephen R. Platt, Vintage, 512pp., 2012.

Two books on the Taiping Rebellion

The past can illuminate the present, but sometimes the present also illuminates the past. With millions of Americans seized by the easily falsifiable quasi-religious rantings of QAnon and similar movements, the speed with which millions of Chinese came to believe that a failed examination candidate was the younger brother of Jesus Christ sent from heaven to overthrow their Manchu rulers seems more comprehensible.

The Taiping Rebellion, the single greatest disaster of the 19th century, cost over 20 million lives and destroyed China as a functional state. For more understanding, turn to Jonathan Spence’s classic God’s Chinese Son or Stephen Platt’s more recent Autumn in the Heavenly Kingdom.