Another Base Attack in Afghanistan Hushed Up to Hurry U.S. Exit

Camp Chapman, once the scene of the CIA’s second-deadliest day, was hit again in December—but never reported.

Eleven years after one of the largest losses of life in CIA history at a notorious military base in southeastern Afghanistan, Camp Chapman was attacked again in early December, a seemingly blatant violation of the U.S.-Taliban peace agreement.

Yet unlike the prior four big attacks on Camp Chapman, located northeast of the city of Khost, last December’s deadly assault went unreported and unacknowledged. The attack killed four members of the Khost Protection Force, or KPF—a CIA-trained and equipped militia that maintains an iron grip on the province—as well as three Afghan soldiers and at least six civilians.

But neither local nor international media reported on the incident. Neither Washington nor the NATO-led mission in Afghanistan shared any information about the attack publicly or in response to requests. Immediately following the attack, both the Afghan Army and the Khost police were denied access to the scene. The Afghan Ministry of the Interior and the Criminal Technique department in Kabul both said they had no documentation of the incident. A spokesperson for the governor of Khost said that “the KPF did not share the information from the blast with us.”

The attack came about six weeks before the United States’ deadline to drawdown its troops in Afghanistan—and underscores both the security vacuum those departing troops leave behind, and the many ways in which the Taliban appear to be violating the terms of their 2020 peace agreement with the Trump administration. The deafening silence around the attack on Camp Chapman is part of a pattern of lack of transparency and information about the U.S. mission in the country, as Washington is increasingly turning a blind eye to a surge in terrorist attacks in recent months, including attacks against bases long associated with U.S. forces.

The deafening silence around the attack on Camp Chapman is part of a pattern of lack of transparency and information about the U.S. mission in the country.“The optics are dreadful: The United States is pulling troops from the country even as their bases continue to get hit, and the American people aren’t even allowed to know,” said Michael Kugelman, deputy director of the Asia Program and senior associate at The Wilson Center. “The outgoing administration is trying to project the idea of a responsible withdrawal, with U.S. forces departing against the backdrop of a new peace process. And yet this attack belies that overly rosy depiction. Here we are talking about a deadly attack on a U.S. base, and one that comes with an agreement in place with the Taliban that U.S. forces won’t be targeted.”

Camp Chapman was one of several U.S. military bases where the CIA placed operatives and special forces as part of its mission to dismantle al Qaeda and capture or kill Osama bin Laden—ideally situated near the porous border with Pakistan that allowed insurgents to move between the two countries with ease.

Later, the base evolved into a major counterterrorism hub of the CIA’s paramilitary Special Activities Division, used for joint operations with U.S. special forces and Afghan allies like the KPF. That militia, which has been linked to the killing of local journalists and civilians by human-rights organizations and the United Nations, has cowed the local population.

During the last decade, Chapman’s prominence as a U.S. base—and hub of KPF operations—made it a repeated target of terror attacks, with deadly assaults in 2012, 2015, and 2017, for two of which the Taliban claimed responsibility. Although the Taliban denied responsibility for the third, they subsequently claimed to have launched an internal investigation into the attack. 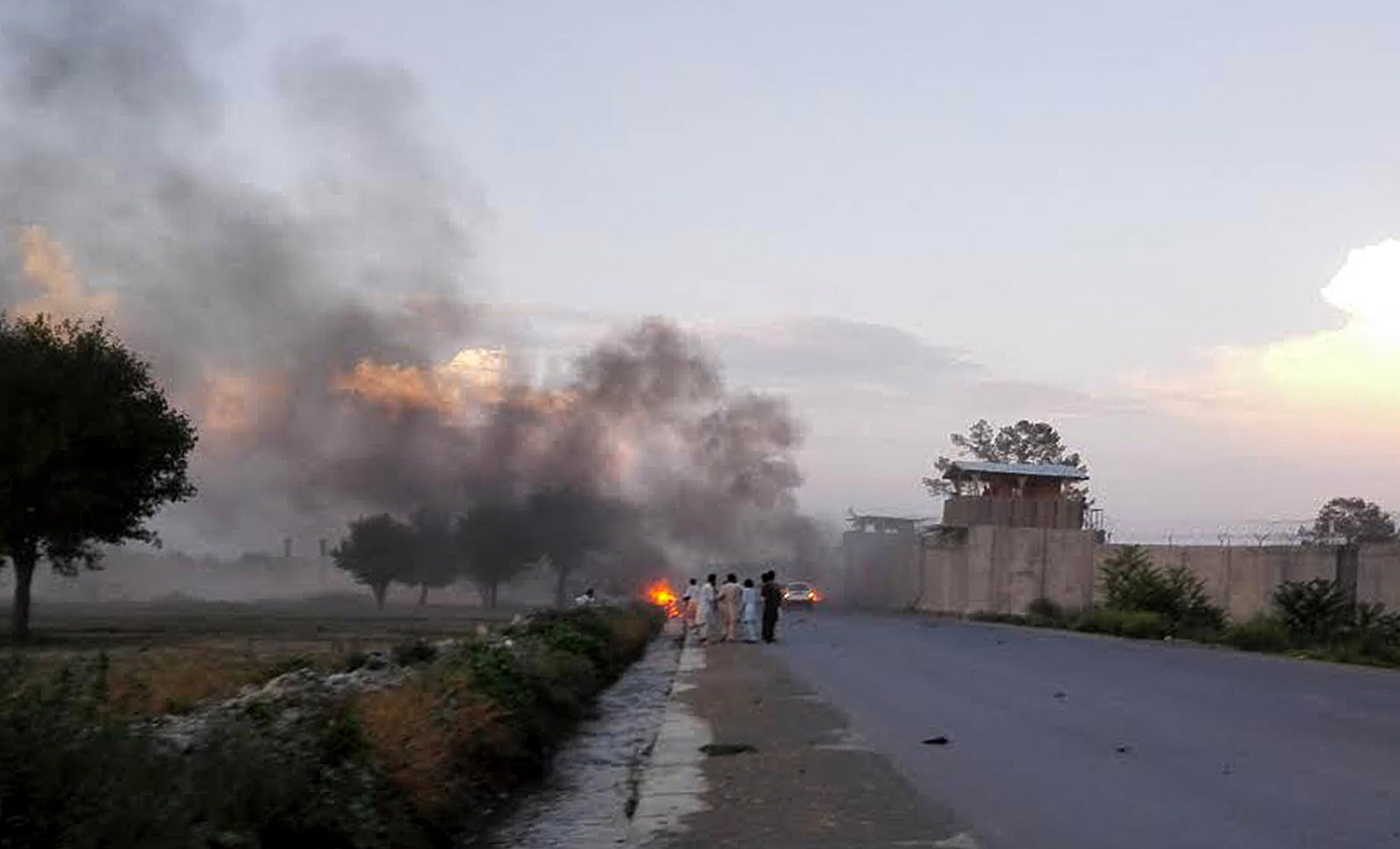 And again late last year. About three in the afternoon on Dec. 2, a humvee packed with explosives blew up in the Camp Chapman employee parking lot, a blast that could easily be heard throughout the city. A local NGO reported that four KPF members were killed in the blast, along with three Afghan National Security Forces and at least six civilians. Some 20 Afghan troops were also wounded.

A security official who wished to remain anonymous confirmed that the explosion killed several KPF members. Other security sources confirmed the death of four civilians. The KPF is known for closely guarding any casualties it suffers, in an effort to maintain the impression of an invincible force.

No group has claimed responsibility for the attack. Taliban Spokesman Zabihullah Mujahid did not respond to numerous requests for comment; neither did the American-led mission in Afghanistan. On Jan. 4, Col. Sonny Leggett, a spokesman for U.S. Forces in Afghanistan, tweeted, “The Taliban’s campaign of unclaimed attacks & targeted killings of government officials, civil society leaders & journalists must also cease for peace to succeed.”

Employees at the base familiar with the situation confirmed that U.S. advisers were still at Chapman at the time of the attack, unsurprising given the base’s historic centrality to counterterrorism operations in that part of the country. An official from the Afghan Ministry of Interior said he believed criminal investigators from the U.S. base at Bagram Airfield investigated the Chapman attack—another sign of lingering U.S. presence at the base. 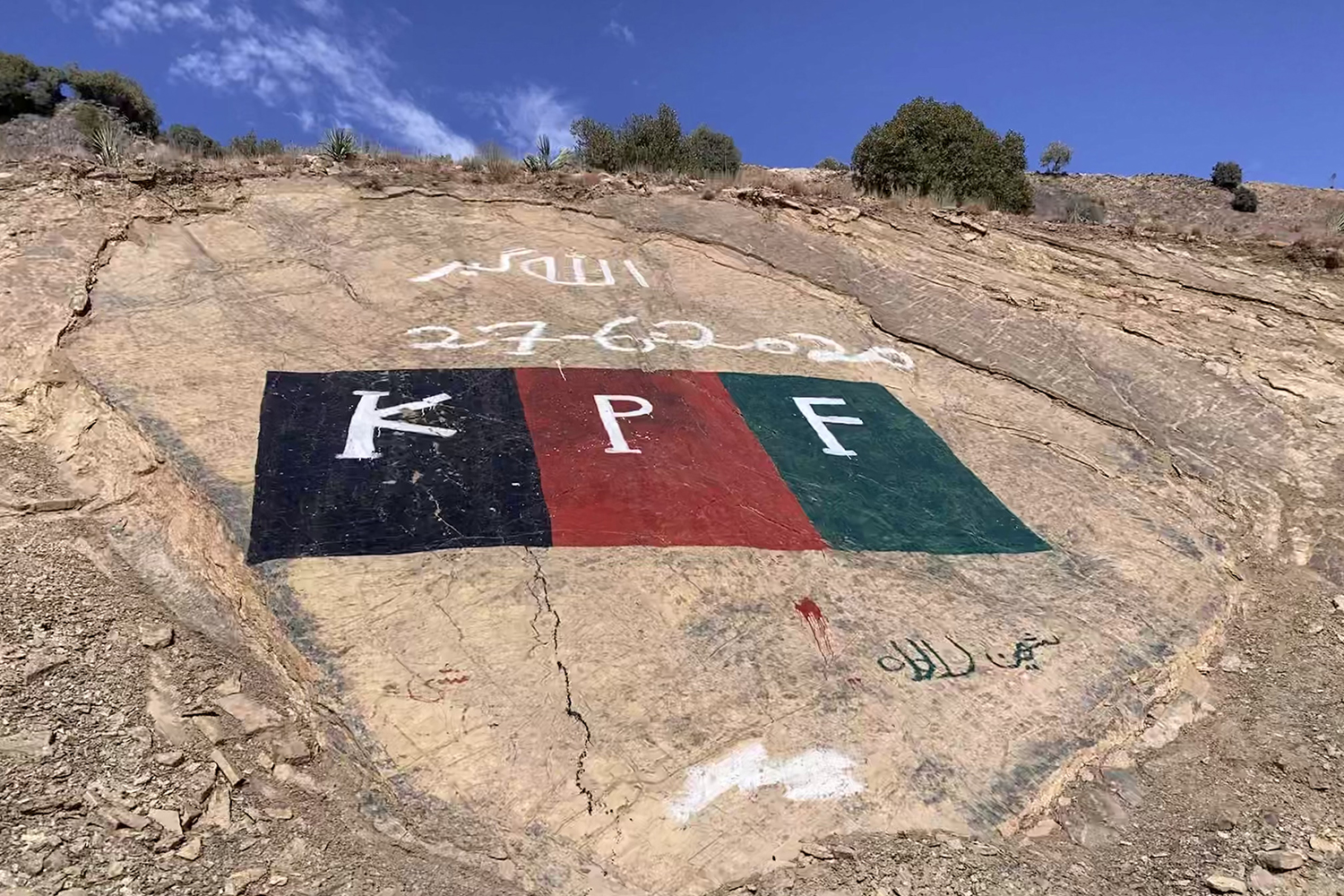 A Khost Protection Force logo painted near the road connecting Khost city with the Pakistan border as seen on Nov. 21, 2020. For Foreign Policy

Asfandyar Mir, a political scientist and postdoctoral fellow at Stanford University’s Center for International Security and Cooperation, said he would be very surprised if there weren’t still U.S. advisers there. “I think Chapman will be one of the last places to evacuate,” he said. And years of close cooperation between U.S. forces and the KPF have made Chapman a proxy target for any actors wanting to strike a blow at the United States.

If the Taliban were indeed behind the attack, it would be a big problem for the U.S.-Taliban peace deal.

“It is no surprise that the Taliban would attempt to strike a base used by the KPF; given the history of intimate U.S. support for such groups including witness accounts of Americans accompanying them on night raids, it is plausible that this support quietly continues—a potential source of contention between the United States. and Taliban,” says Andrew Watkins, senior analyst on Afghanistan for the International Crisis Group. If the Taliban were indeed behind the attack, it would be a big problem for the U.S.-Taliban peace deal. Signed in February 2020, that deal stipulated that the Taliban would refrain from striking American or NATO forces as they gradually withdrew from the country. And the U.S. military would attack the Taliban only to defend Afghan forces.

Despite the deal, the Taliban has maintained a breakneck pace of attacks across the country, with violence rising significantly since the signing. In return, the United States has carried out dozens of airstrikes, backing Afghan government forces, U.S. officials say. Publicly, the Taliban have denounced the United States for carrying out airstrikes on their fighters, claiming the Americans were violating the deal.

Afghans Caught in the Crossfire While U.S. Prepares to Clear Out

Despite ongoing peace talks, intensifying Taliban attacks on Afghans across the country are out of control—and threaten the country’s future.

The attack on Chapman is not the first apparent violation of the U.S.–Taliban agreement. Rocket attacks hit several bases housing American troops, including Camp Bastion—a former British base in Helmand province— in late July, and Camp Dwyer, a large U.S. military base about 50 miles south of Bastion, in late August. American military officials stated that the Taliban were the suspected perpetrators of the July and August attacks. And in December, Bagram Airfield—the largest American base in Afghanistan— was targeted; while no group claimed responsibility, both the Taliban and the Islamic State have attacked it in the past.

“If the attack was carried out by the Taliban, then it is a blatant violation of the U.S.-Taliban agreement,” said Kugelman. “The text of the Doha Accord is crystal clear in stating that the Taliban will not threaten the security of the U.S. in Afghanistan.”

The U.S-Taliban agreement contains no provisions for what will happen if the Taliban break their promises, beyond the U.S. pausing its troop withdrawal—but even that is not happening. Instead, the Trump administration continues to press ahead with the withdrawal just days before the Biden administration comes into office, ignoring real terrorist attacks in Afghanistan in favor of demonizing Iran over its nebulous ties to al Qaeda.

“One can’t but help think of Vietnam: U.S. forces are withdrawing amid heavy violence and an ever-strengthening insurgency, and the U.S. government is unsuccessfully trying to put a happy face on a very sad situation—while not leveling with the American people about what is going on,” said Kugelman.

“The bottom line is that this attack will give further ammunition to those critics that claim U.S. strategy in Afghanistan is more about cutting and running than about forging a true peace.”

Lynzy Billing is a journalist and photographer based between Afghanistan and Iraq. Twitter: @LynzyBilling

Afghans Caught in the Crossfire While U.S. Prepares to Clear Out

Despite ongoing peace talks, intensifying Taliban attacks on Afghans across the country are out of control—and threaten the country’s future.