Ahead of Biden’s Inauguration, a Solemn Eeriness Descends on the Capital

A maze of checkpoints stretches across Washington’s commercial and residential districts, webbed in caution tape and patrolled by thousands of troops.

National Guard officers march toward a series of security checkpoints in downtown Washington on Jan. 17. Kelly Kimball for Foreign Policy

WASHINGTON—As night fell on Sunday, a column of U.S. National Guard troops walked single file down an empty street toward the flag-draped, fence-ringed U.S. Capitol grandstand where President-elect Joe Biden will be inaugurated this week. 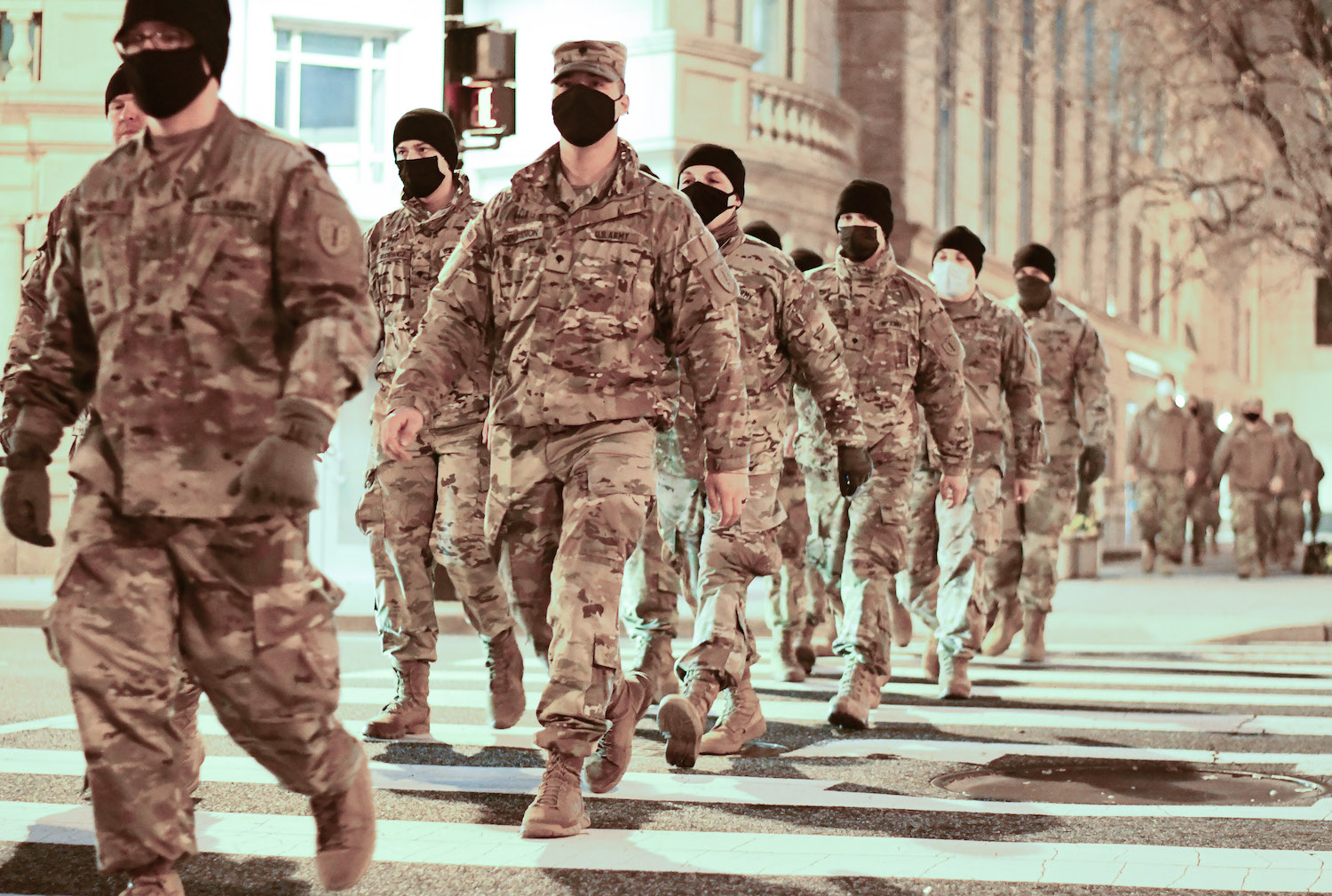 National Guard officers march toward a series of security checkpoints in downtown Washington on Jan. 17. Kelly Kimball for Foreign Policy

WASHINGTON—As night fell on Sunday, a column of U.S. National Guard troops walked single file down an empty street toward the flag-draped, fence-ringed U.S. Capitol grandstand where President-elect Joe Biden will be inaugurated this week.

The streets near the National Mall have been eerily quiet for days, locked behind a web of checkpoints and caution tape. The images of a heavy military and security presence enveloping the city since a pro-Trump mob stormed the Capitol on Jan. 6 have left former officials and international onlookers who spoke to Foreign Policy newly worried about U.S. instability and comparing Washington to American-occupied areas abroad.

“It is a sad, shocking sight to look at our Capitol and see similarities to my time in the Green Zone, to feel that sense of doom and danger for what ought to be a celebration of democracy,” said Brett Bruen, a former U.S. diplomat who lives in nearby Virginia, comparing the scenes in Washington to the 4-square-mile fortified zone of Iraq’s capital during the war. “Just the fact that we have to have 20,000 soldiers and heavily equip [them] to secure a presidential inauguration is really going to undermine efforts to tell folks overseas, ‘It’s going to be OK. The U.S. is back.’”

“They’re going to look at these images and question whether we’re less than four years away from a return to this kind of politics,” Bruen said. “It is just going to be seared into the minds of foreigners and foreign leaders for the decades to come.” 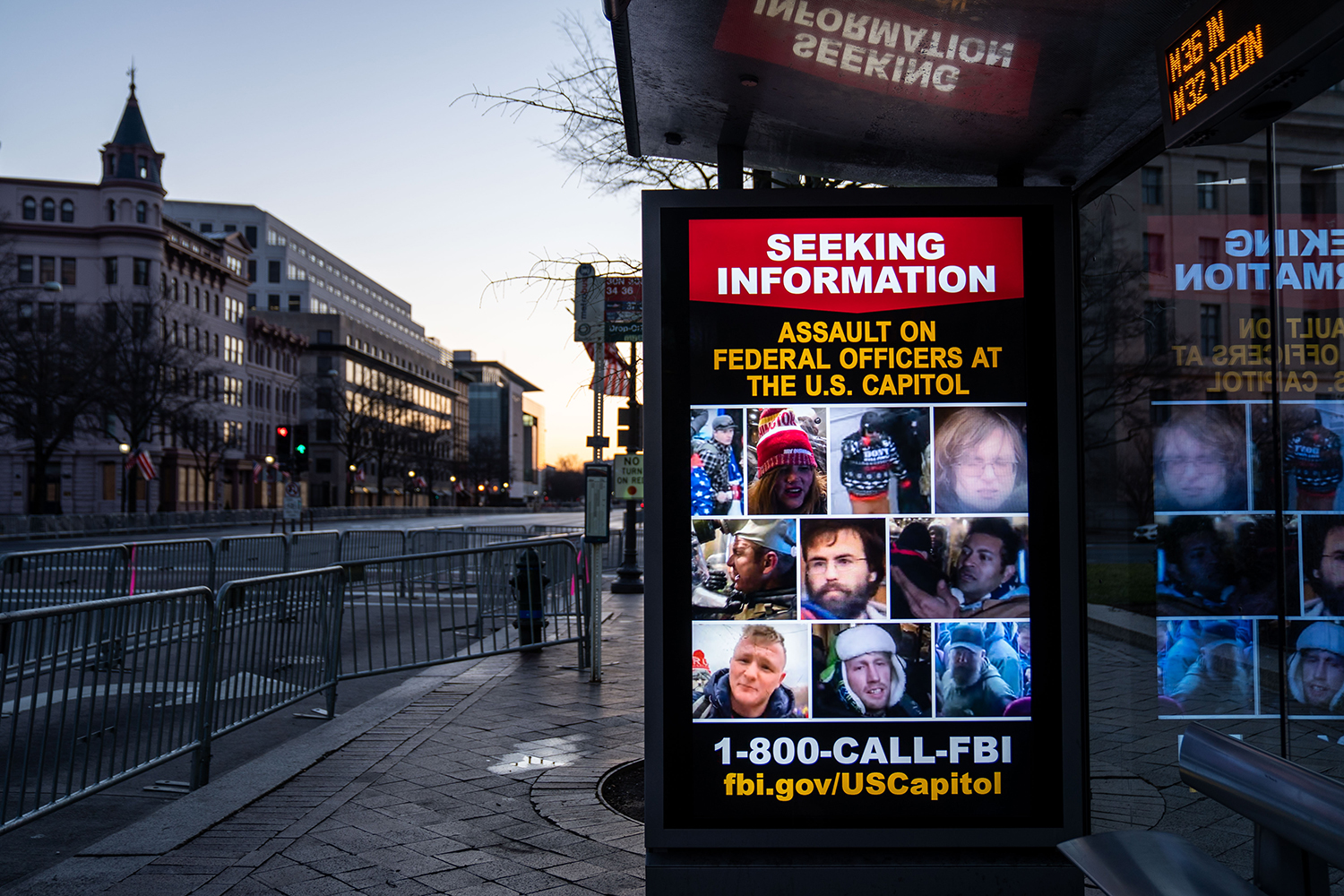 A bus stop sign, seen from Pennsylvania Avenue in Washington on Jan. 16, seeks information about rioters who breached the Capitol building. 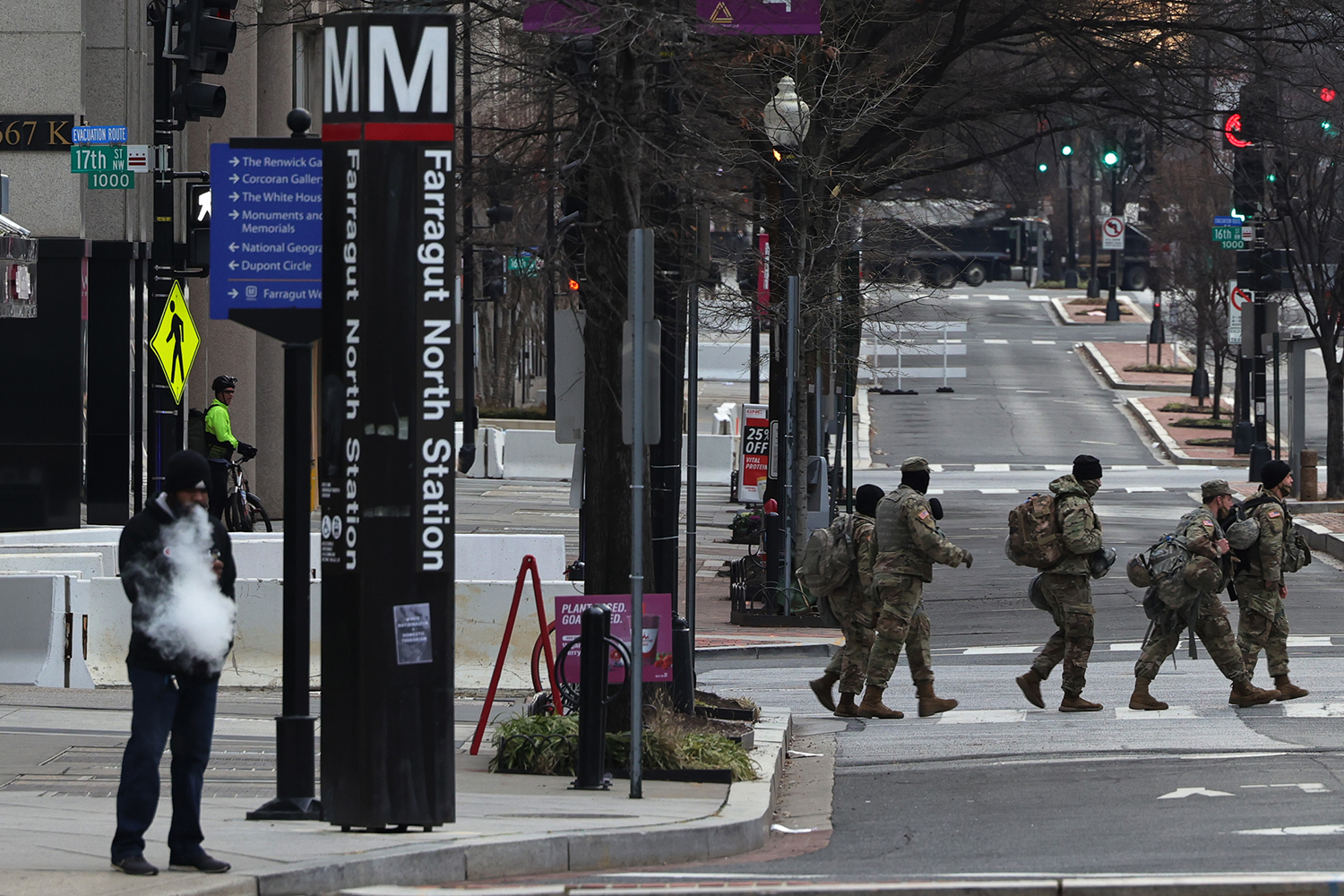 Members of the National Guard cross a street near the Farragut North Metro station in Washington on Jan. 18. Michael M. Santiago/Getty Images 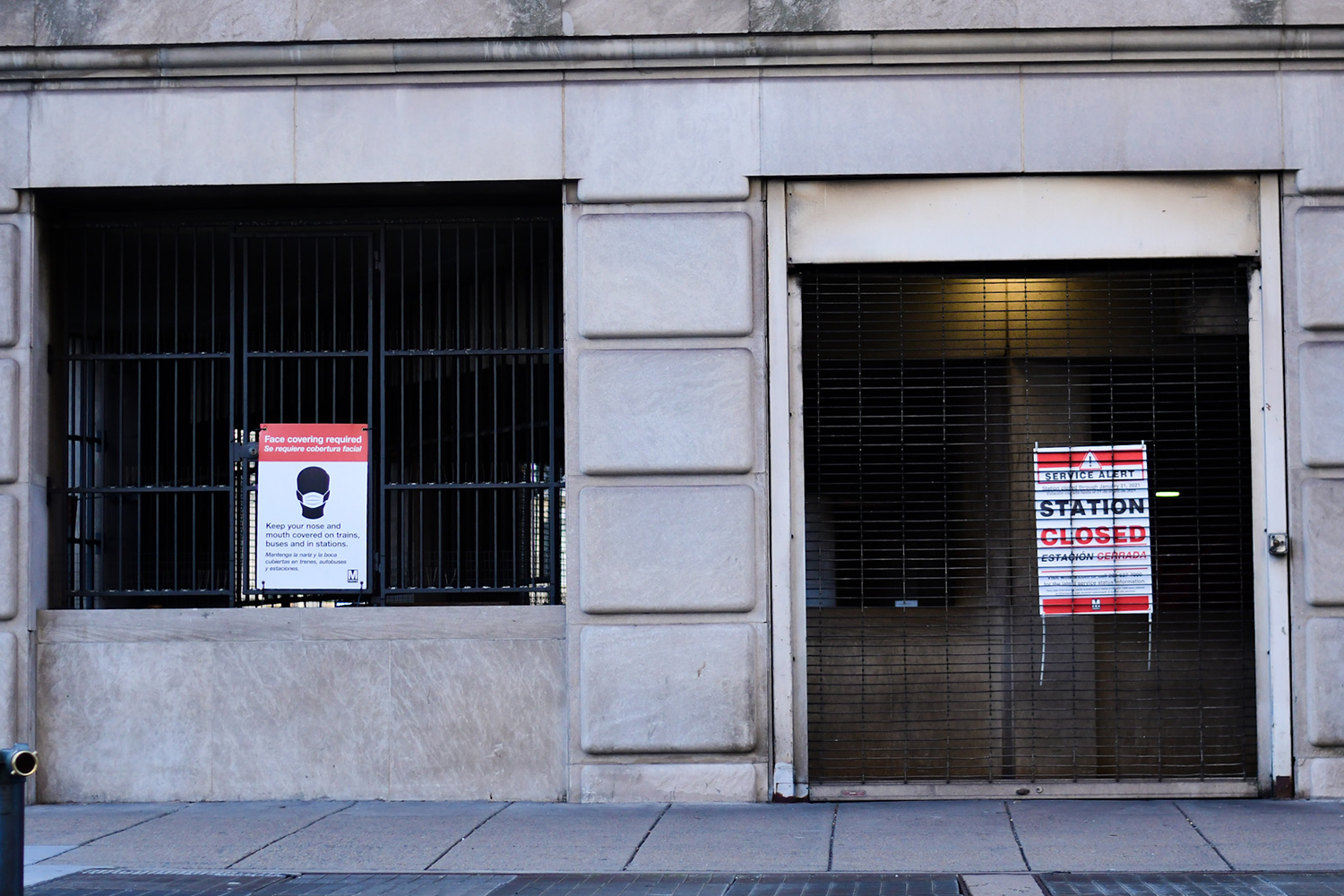 A Metro stop near the White House is temporarily shuttered on Jan. 18 ahead of the presidential inauguration of Joe Biden. Thirteen Metro stations are temporarily closed in the region due to tightened security measures in the wake of the deadly Jan. 6th Capitol attack.

A Metro stop near the White House is temporarily shuttered on Jan. 18 ahead of the inauguration of President-elect Joe Biden. Thirteen Metro stations are temporarily closed in the region due to tightened security measures in the wake of the deadly Jan. 6 Capitol attack. Kelly Kimball for Foreign Policy

With lingering security threats and empty city bus stops flashing the images of unnamed insurrection suspects still at large, D.C. officials have urged travelers to avoid the area, the only tourists being out-of-town National Guardsmen. At U.S. Secret Service-run checkpoints limiting car traffic, an effort to prevent more violent demonstrators from entering the city, crossing the street feels like going through airport screening. At one such checkpoint, an armed security guard asked a Foreign Policy reporter to turn on their camera and take a photo, while another was asked to take a sip from their metal water bottle in order for the guards to discern if the items were concealed weapons. 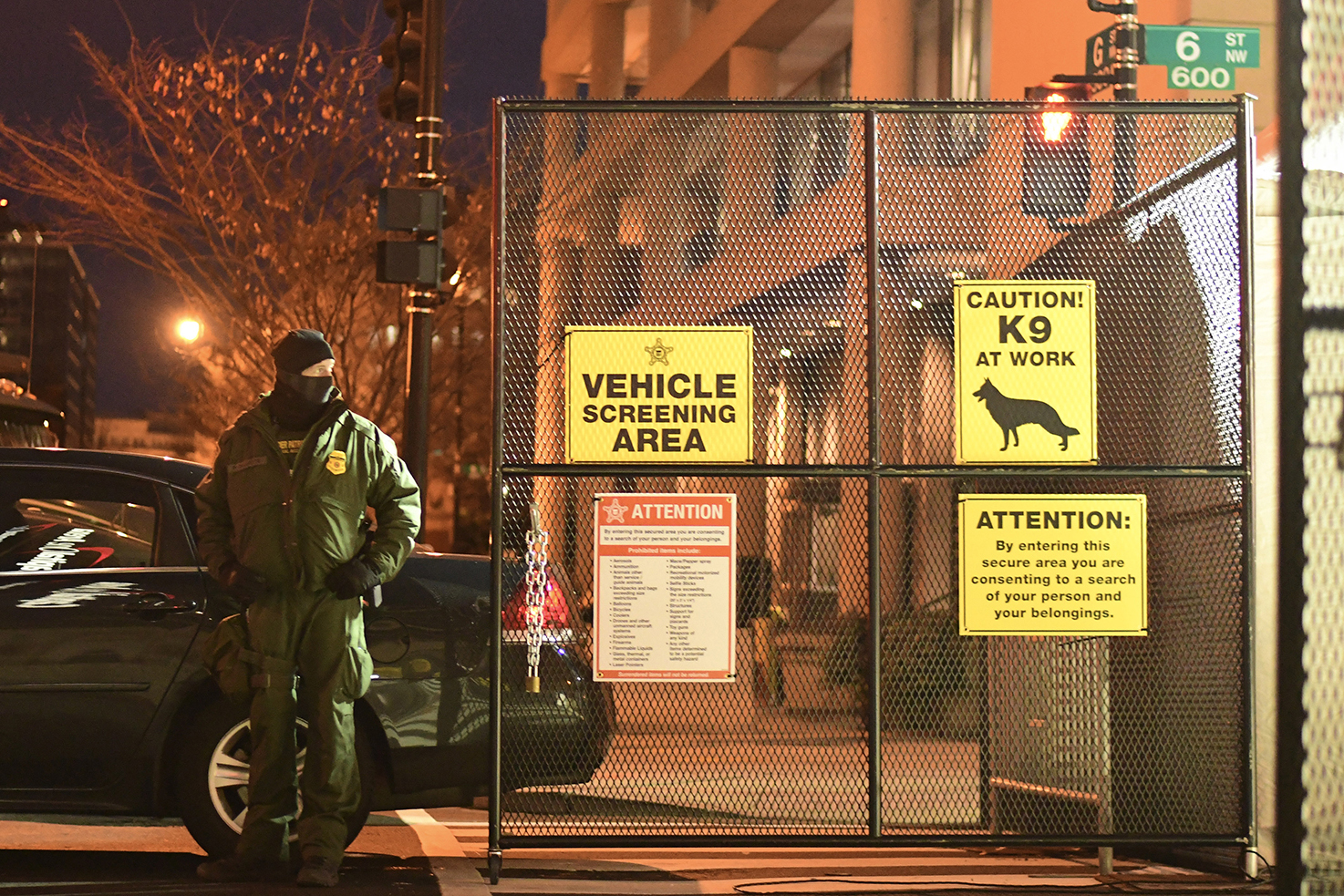 A U.S. Customs and Border Protection officer staffs a security checkpoint and vehicle screening area several blocks from the U.S. Capitol in Washington on Jan. 17. 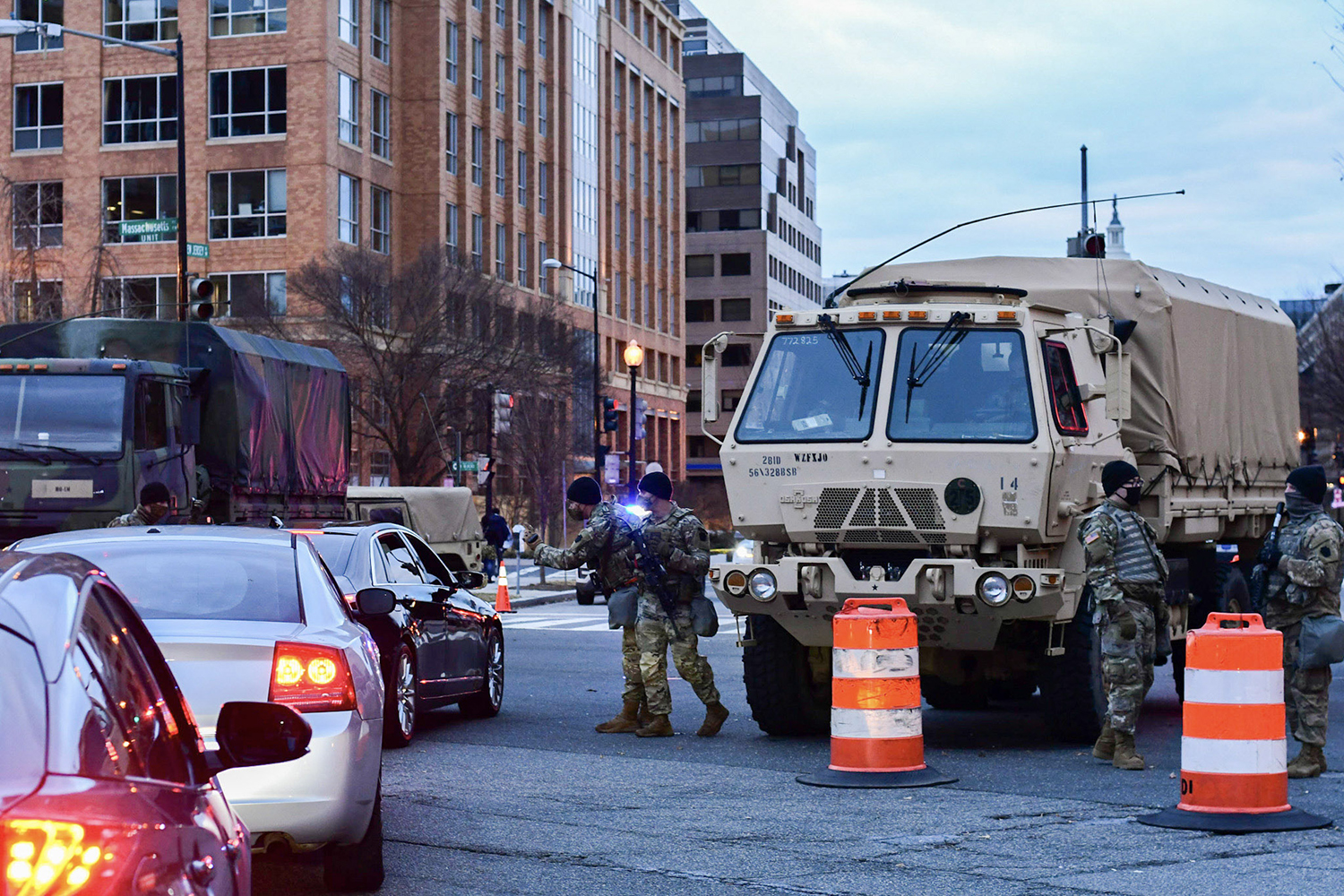 Members of the National Guard divert traffic away from the U.S. Capitol and National Mall in Washington on Jan. 17. Kelly Kimball for Foreign Policy

For people who have lived in Washington all their lives, like Dan Freeman, who grew up blocks from the White House and was a former parliamentarian for two House committees, the images of rioters storming the halls of the Capitol and denying the results of the 2020 presidential election were alarming. “I was moved to tears when I witnessed what was going on at the Capitol on the 6th,” he said, denouncing what he called the defilement of the seat of U.S. democracy.

The Guard presence could surge to as many as 25,000 troops by the time Biden is inaugurated, five times the number of U.S. forces now in Iraq and Afghanistan combined. While many Americans have compared the massive display of military might to what U.S. forces did in Baghdad or Kabul, many overseas observers scoff: The troops are not foreign invaders, and they’re not there to stay. But the impact of the last two weeks may well be. 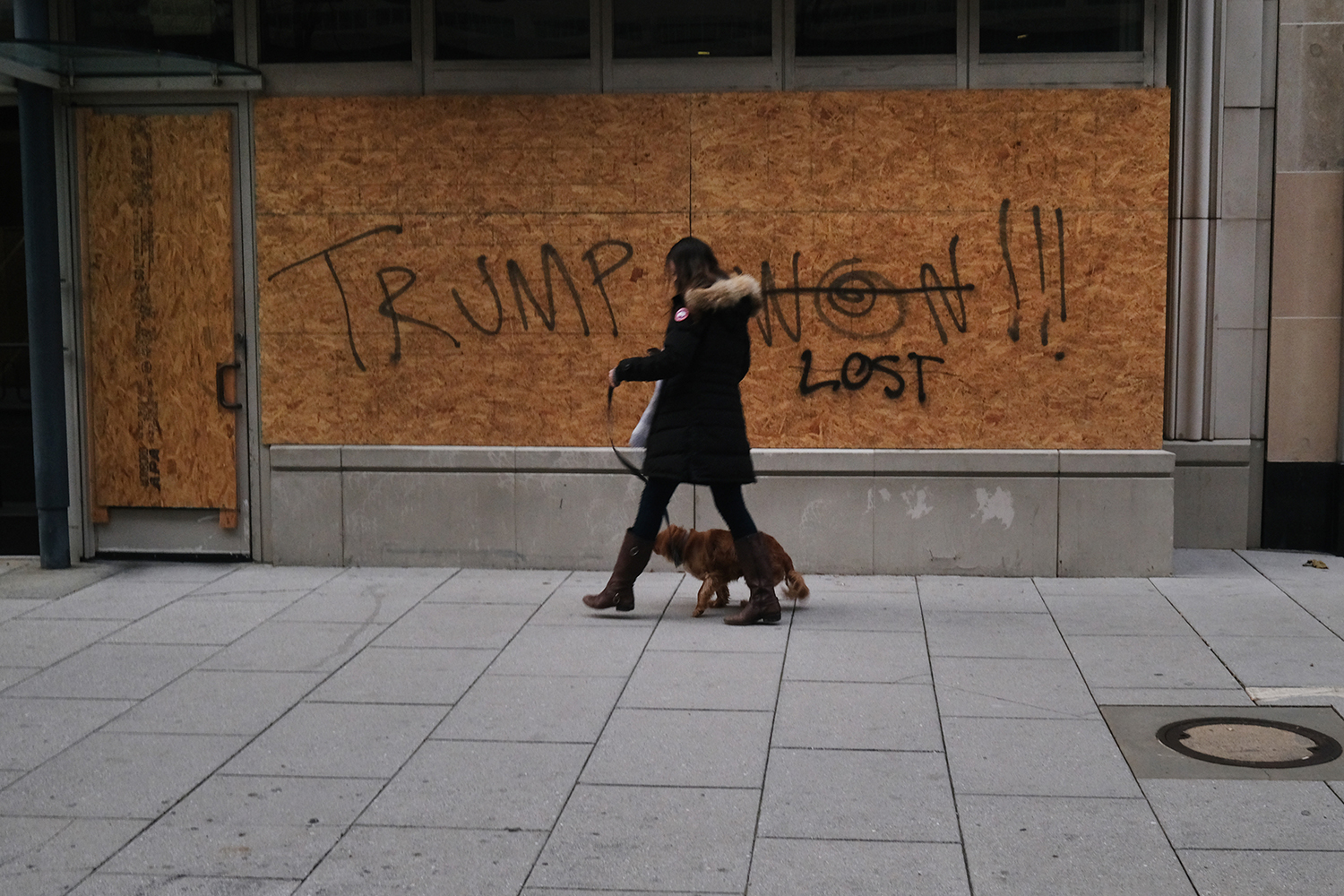 A person walks a dog past a boarded-up business in Washington on Jan. 16.

A person walks a dog past a boarded-up business in Washington on Jan. 16. Spencer Platt/Getty Images 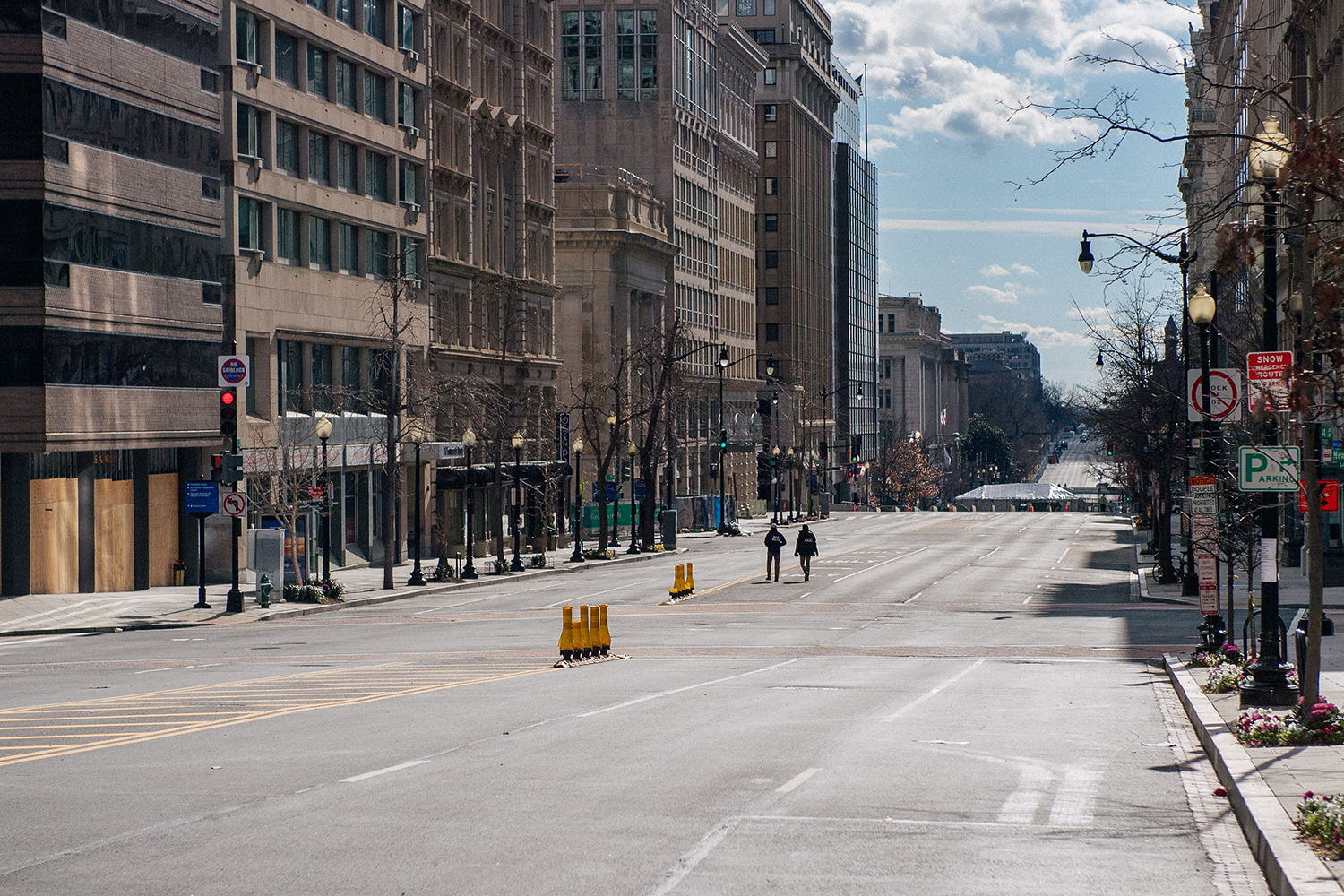 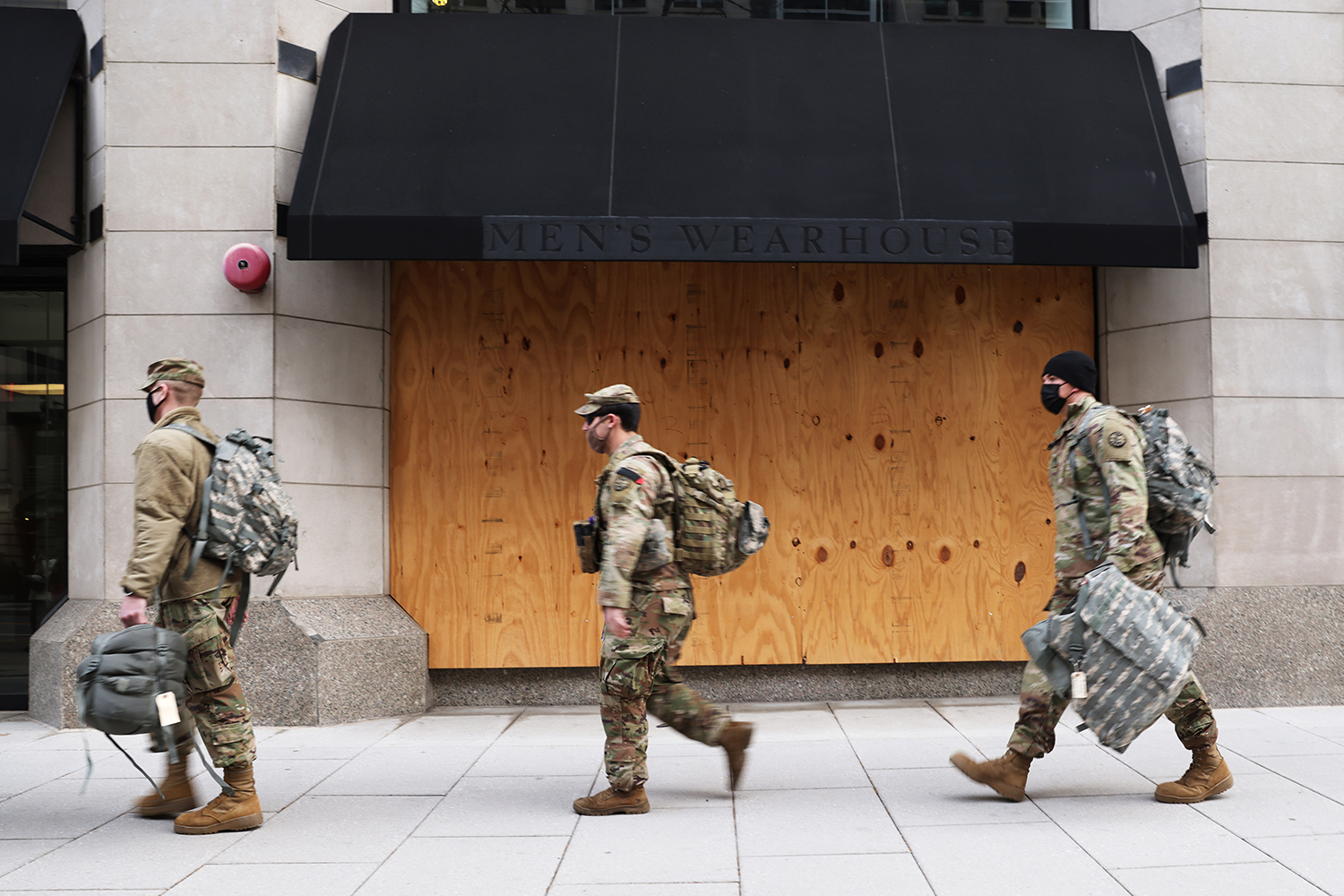 Members of the National Guard walk past a boarded-up store in downtown Washington on Jan. 16.

Members of the National Guard walk past a boarded-up store in downtown Washington on Jan. 16. Spencer Platt/Getty Images

Two weeks after the Capitol assault, the ripple effect is felt oceans away, where U.S. partners who saw Washington as a role model for democracy are still trying to piece together what happened.

“We cannot believe that actually happened, because we all learned democracy from [the] United States,” said Wang Ting-yu, a co-chair of the foreign affairs and national defense committee in Taiwan’s parliament. “[The] United States is a kind of standard of democracy. So that chaos happened on Capitol Hill, we feel sorry for that.”

In the Middle East and North Africa, “the main reaction has been one of jaded indifference and blasé desolation,” said Jalel Harchaoui, who covers the region as a Paris-based senior fellow at the Global Initiative Against Transnational Organized Crime. “But underneath that, one could still sense an authentic sadness at the spectacle of familiar forms of fragmentation, dysfunction, and polarization now affecting the United States.” 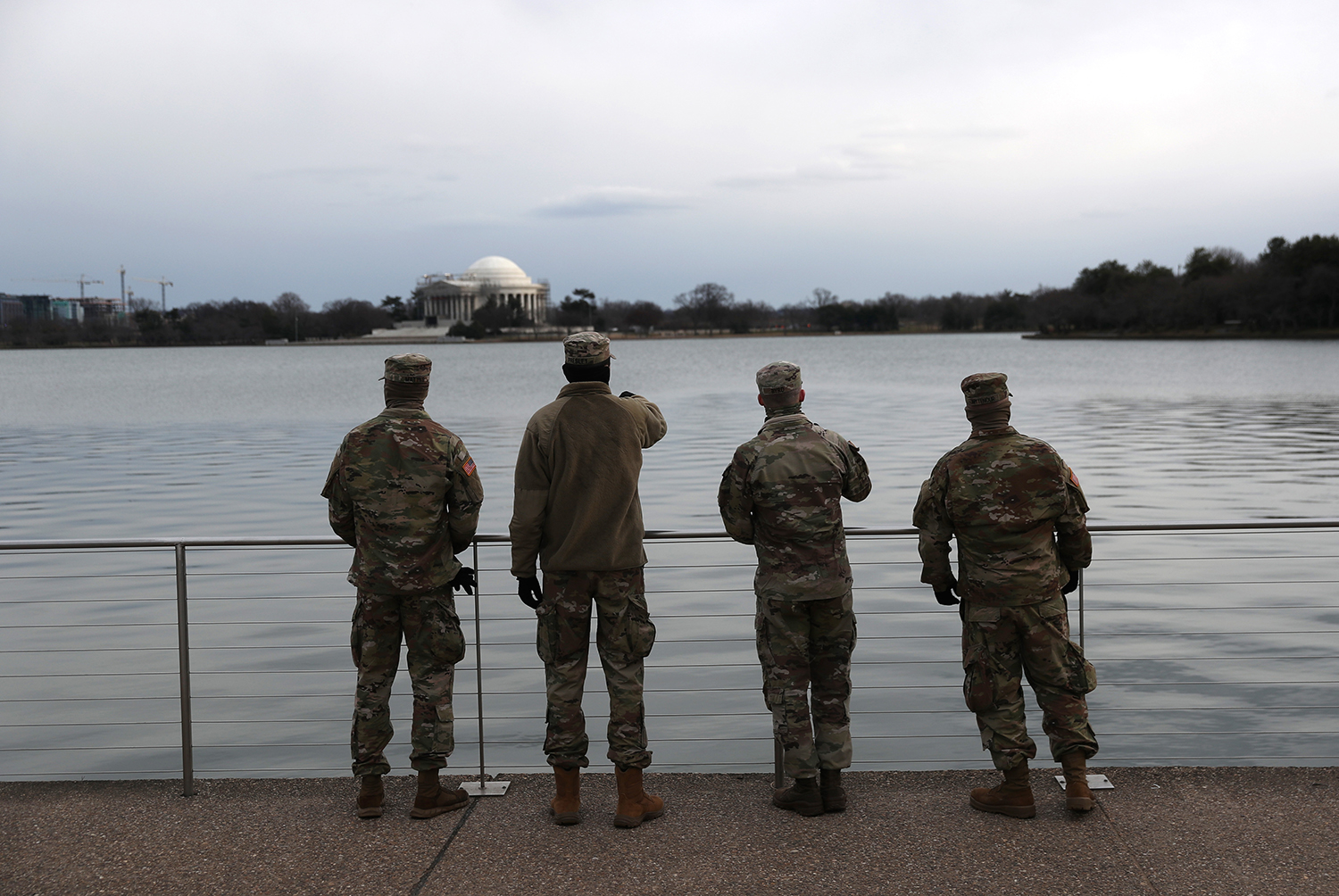 Members of the Florida National Guard view the Jefferson Memorial from along the Tidal Basin in Washington on Jan. 16.

Members of the Florida National Guard view the Jefferson Memorial from along the Tidal Basin in Washington on Jan. 16. Joe Raedle/Getty Images 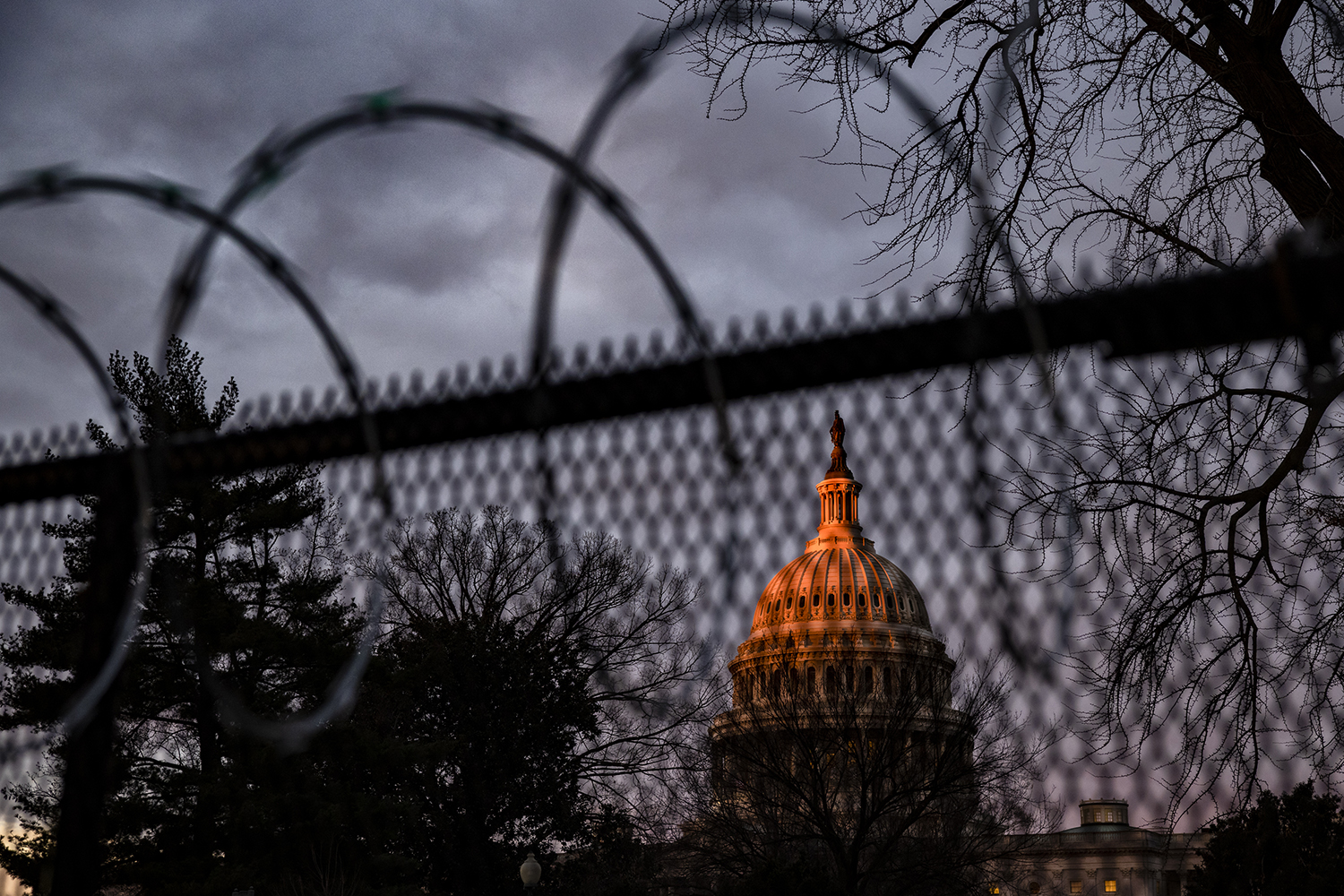 Razor wire tops the fence surrounding the U.S. Capitol in Washington as the sun rises on Jan. 17.

Razor wire tops the fence surrounding the U.S. Capitol in Washington as the sun rises on Jan. 17. Samuel Corum/Getty Images

Bruen, the former diplomat, said the violence at the Capitol and the images of the locked-down city could force the new Biden administration to “spend more time explaining what is wrong with our country than the change we want to see in the world,” especially if there is further violence.

“To many who study, observe, respect, and love America, these dystopian pictures seem out of [a] third-rate movie,” said Alon Pinkas, an Israeli diplomat who served as a foreign-policy advisor to former Prime Minister Ehud Barak. “But [they] are just the final manifestation of what Donald Trump has done to America.”

The famed political philosopher still believes in democracy’s ultimate triumph but says the “end of history” has been sidetracked by unforeseen forces.

Former U.S. Secretary of State Rex Tillerson on the mess Donald Trump is leaving behind.

Italy’s politics is a constant cycle of failed populist waves.

Crises at home and abroad have touched off food shortages across the country.

Deliveries of packages and pension payments have helped uphold a fragile sense of normalcy for civilians under fire.