The World Is Glad to See Biden Take Office

In major countries, the new U.S. president starts with favorable approval ratings from day one—with the notable exception of Russia. 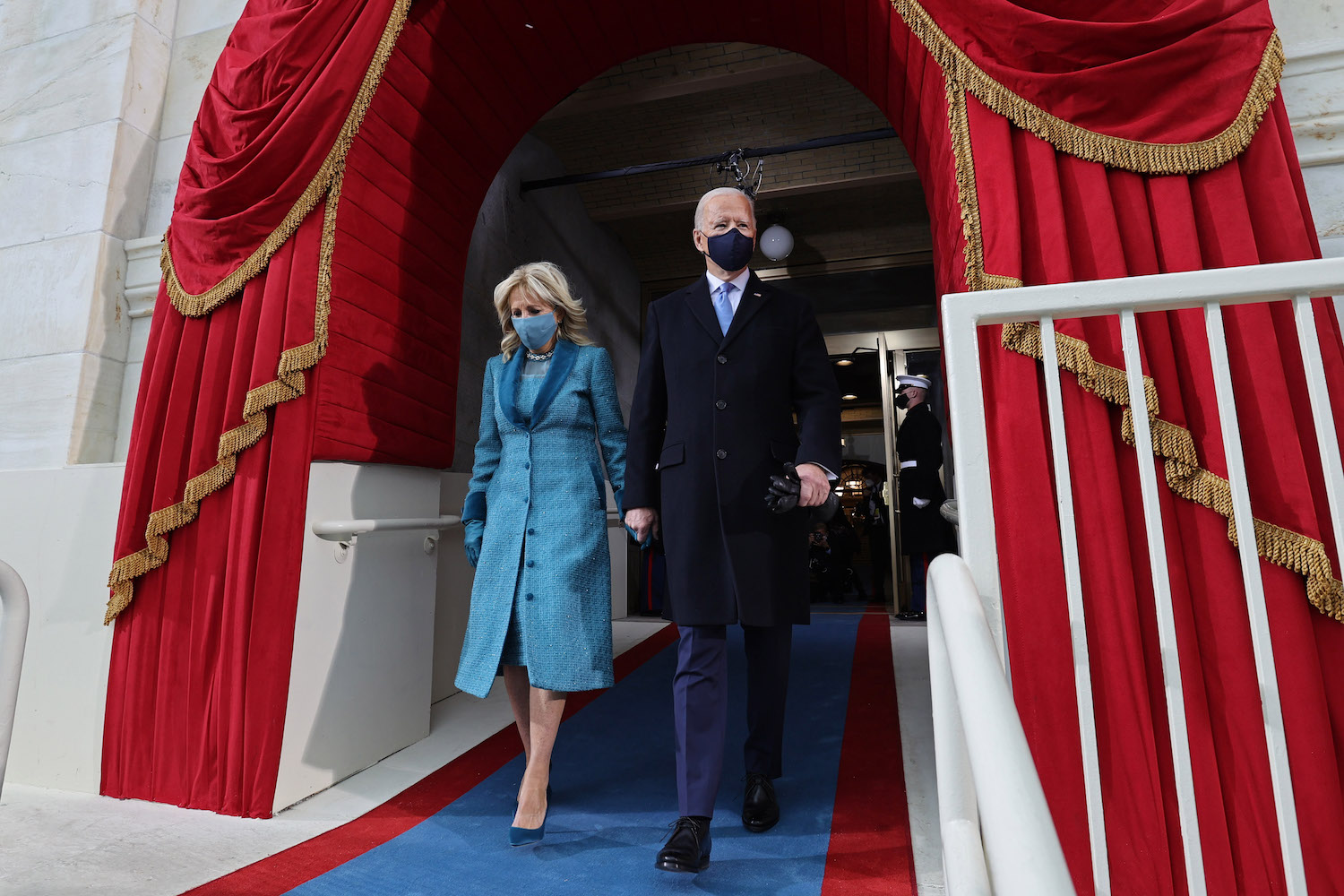 President-elect Joe Biden arrives with his wife, Jill Biden, for his inauguration as the 46th president of the United States at the U.S. Capitol in Washington on Jan. 20. Jonathan Ernst-Pool/Getty Images

As Joe Biden starts his first full day in the Oval Office on Thursday, much of the world is optimistic about his presidency and U.S. leadership—though two notable exceptions are Russia and the United States itself—according to a new report by YouGov and Friedrich-Ebert-Stiftung New York.

Biden, even before he took office, was getting favorable reviews from the rest of the world. More than 60 percent of respondents in France, Mexico, India, and Indonesia said they approved of him, and Germany saw 73 percent approval ratings, with Kenya at almost 90 percent. The view inside the United States isn’t quite so rosy, with just half of respondents expressing a favorable view of their new president (though that’s still better than former President Donald Trump’s personal-worst approval rating of 34 percent when he left office). The country that has the dimmest view of Biden? Russia, with just 23 percent expressing approval.

Part of the explanation for Biden’s high approval ratings even before taking office is simply whom he is replacing. Trump was widely unpopular with U.S. allies, as he clashed with NATO, tried to pull troops from Germany, levied tariffs on Canada and Mexico, and tried to shake out more money for troops from Japan and South Korea. Trump received low confidence ratings from traditional allies France, Germany, and the United Kingdom, according to the Pew Research Center.

The world has high hopes that Biden will be able to demonstrate more leadership on key issues such as COVID-19, climate change, human rights, terrorism, gender equity, protection of minority populations, and democratic freedoms.

He has already begun to make these changes. On his first day in office, Biden signed a raft of executive orders—including ones implementing a mask mandate on federal property, increasing support for under-served communities, ending the travel ban on several mostly Muslim countries, and rejoining the Paris climate accords. On Thursday, COVID-19 point man Anthony Fauci said the United States would rejoin the World Health Organization and work with the global coalition to make vaccines available.

It’s not just survey respondents who are glad of the change. “Once again, after four long years, Europe has a friend in the White House,” European Commission President Ursula von der Leyen said on Wednesday. German President Frank-Walter Steinmeier said Biden’s inauguration was a “good day for democracy,” while Chancellor Angela Merkel commented that she was “look[ing] forward to a new chapter of German-American friendship and cooperation.”

South Africa’s government hasn’t spoken publicly about the U.S. elections, but privately, according to CNN, it welcomes a return to multilateralism. The view from Indonesia is similar: A researcher at the Jakarta-based Institute for Development of Economics and Finance suggests that Biden will dial down the tension in the U.S.-China trade war, which weighed on global trade and growth, thus allowing a rebound in demand for goods from Indonesia.

But not everyone is excited for the Biden administration. Mexican President Andrés Manuel López Obrador, who was one of the last world leaders to congratulate the former U.S. vice president on his win, reportedly underscored in a phone call with Biden how much he misses Trump. Russian President Vladimir Putin, who shared a warm relationship with Trump, reportedly has no plans to call Biden.

On Inauguration Day, a Kremlin spokesperson told reporters: “Nothing will change for Russia.”

With Trump gone, Biden talks up the need for unity and renewal after four years of bitter division.

From climate change to China to ending the forever wars, here are 10 of the biggest challenges facing the Biden foreign-policy team as it takes office.