As the EU tries to acquire more vaccines, it’s failing to effectively use the ones it already has.

The European Union is facing an accelerating health, economic, and political crisis because of the continent’s persistent failure to vaccinate its population. Amid high infection rates, hospitalizations, and deaths in many member states, the EU economy remains largely in lockdown, more infectious virus variants are spreading, and fingers are being pointed at both the European Commission, responsible for procuring vaccines for the bloc, and the pharmaceutical companies tasked with producing them. The reasons for the EU’s current disarray are, however, more complex.

Early in the pandemic, the commission was tasked with procuring COVID-19 vaccines for the entire EU. This was the most sensible political path, since the alternative would likely have been an increasingly frenzied bidding war among member states of the sort that led to national personal protective equipment export controls earlier in the pandemic. But the commission had no experience in negotiating large-scale pharmaceutical purchases—and, it turns out, learning on the job in the middle of the worst European health crisis in 100 years may not have been a good idea.

The EU seems to have approached the common bulk vaccine purchases with economies of scale foremost in mind—that is, using the continent’s market power to negotiate advantages on price. From a human and macroeconomic perspective, this made little sense, however: The overwhelming priority should have been priority and speed of delivery, since the potential infections avoided and economic savings from an earlier reopening of EU economies would have dwarfed any cost savings from cheaper vaccines. Non-EU governments, such as Israel and the U.K., that made quicker and less price-conscious purchase decisions have been more successful at acquiring early supplies.

EU leaders have a right to feel aggrieved by the news in recent weeks from Pfizer-BioNTech and AstraZeneca that their vaccine shipments to Europe will be temporarily lower than had been agreed on. The European Commission has in response announced a vaccine export notification requirement, obliging EU vaccine exporters to notify—essentially seek authorization from—EU regulators before shipping vaccines outside the continent. 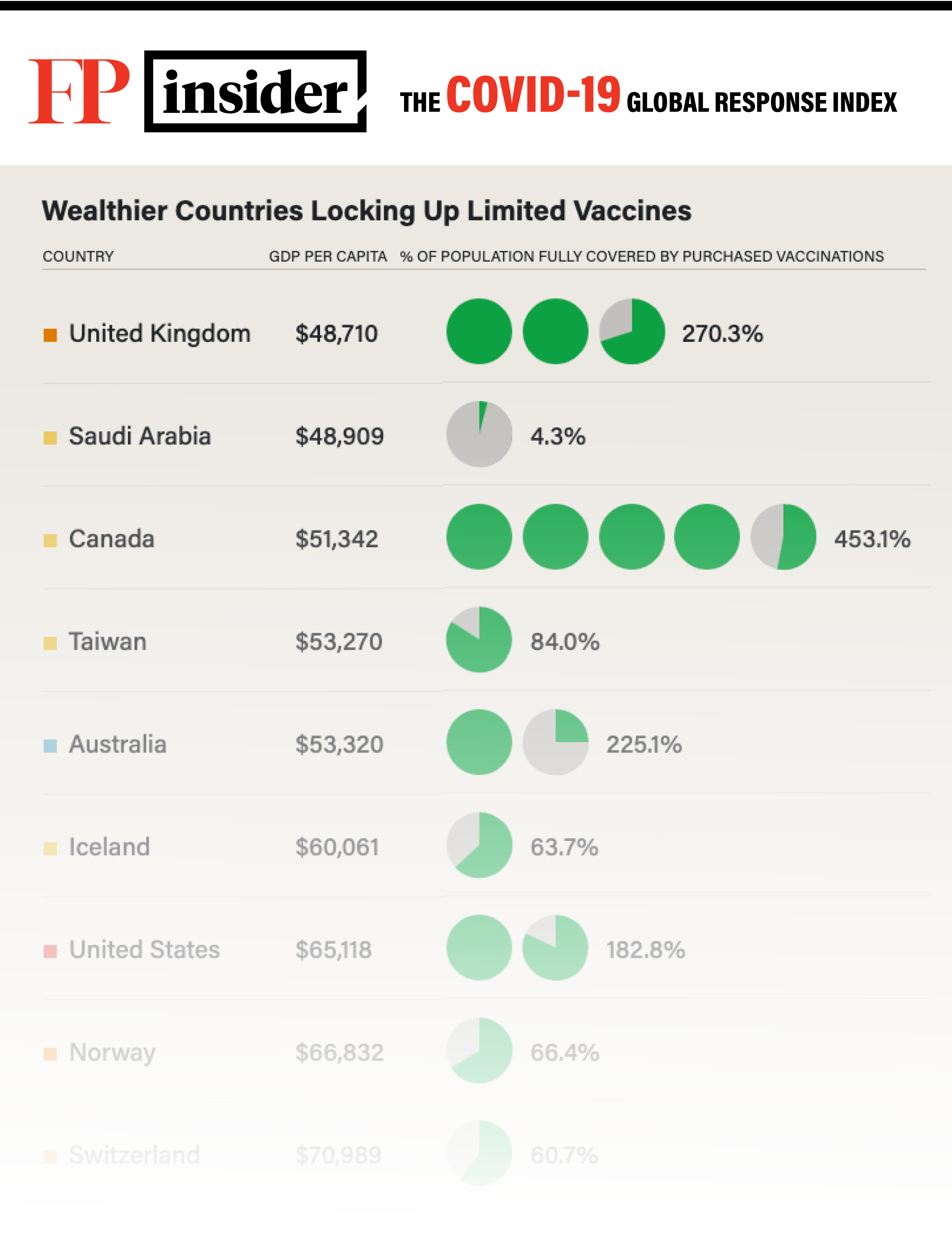 Increased transparency on where precisely vaccines are distributed is not necessarily a bad thing. But if the EU embraces vaccine nationalism to the point of denying companies the right to export vaccines under contract until the EU has secured its own vaccines, it would mark a catastrophic policy mistake. Vaccine supply chains are necessarily complex; European production sites depend on materials from beyond EU borders. If the EU bans exports, retaliation from other countries would be guaranteed, leading to a further decline in already scarce EU vaccine production capacity. Insisting on vaccinating Europeans first would also undermine the sound EU policy goal of helping to vaccinate populations everywhere, in part for moral reasons and in part to avoid seeing mutated COVID-19 variants return back to the EU later on. EU trade and export restrictions on vaccines could thus lead to more Europeans dying in this pandemic.

Rather than indulge in this dangerous path, the European governments should be focused on lower-hanging fruit: They must focus their urgent attention on more effectively injecting the vaccines they have already received. On this count, there can be no doubt that they have not been doing nearly a good enough job.

Vaccine utilization rates among EU governments continue to vary dramatically, even more than a month after EU approval of the first vaccine on Dec. 21. There is little evidence, however, that best practices have spread among member states.

As of Jan. 25, Denmark and Malta have managed to use more than 100 percent of the vaccines made available to them by the EU because they’ve been able to extract more than the officially designated number of vaccine doses from each vial. This stands in contrast, for instance, to the approximately 11 percent used in Bulgaria, 23 percent in the Netherlands, 49 percent in France, 62 percent in Germany, and 57 percent in the EU plus Norway as a whole. In other words, had all of the EU one month into its vaccination program learned to vaccinate as efficiently as Denmark, more than 6 million more Europeans would already have had at least one COVID-19 vaccination. That equals more than 7 percent of the population over the age of 65 in the EU plus Norway.

EU member states are all different geographically, and many face larger challenges reaching vulnerable people than does Denmark, where much of the population is concentrated on a single island. They have also chosen different rollout strategies that might influence these statistics: It might be faster, for instance, to focus on health care personnel who can be reached at often centralized work locations than, say, only the very oldest first—many of whom might still be living at home in isolated areas.

But some rollout options would scarcely be defensible. The EU’s overall 57 percent usage rate of available vaccines suggests that some member states may be administering two-dose vaccines by reserving everyone’s second injection immediately on receiving the first—thus using only 50 percent of available vaccines. This would be an absurd choice, guarding against an improbable total cutoff of future supplies, at the expense of protecting more vulnerable Europeans with at least a first jab today.

The COVID-19 vaccination rollout has also revealed how some European countries, such as the Netherlands, lack a centralized computerized vaccination register, which has evidently complicated the rapid mass rollout of a dual-dose vaccine by making it impossible for the government to keep track of progress. Other member states have been left relying on fax machines to collect vaccination data. These countries no doubt now regret their inadequate pre-pandemic investments in IT in the health care sector. Resilience and flexibility, rather than efficiency and lower costs, may be higher on the political health care agenda after the pandemic. But it’s still not too late to invest in improvements of vaccine deployment infrastructure right now, even if they contribute to some initial rollout delays.

The EU finds itself in an economically and politically explosive situation. Without more vaccines, the EU will not be able to reopen its economy expeditiously, at least not without a ruinous death toll. There will also not be any quick fixes in the coming weeks, as complex vaccine manufacturing capacity cannot be magically conjured up overnight. If Europe wants more of the successful Pfizer-BioNTech, Moderna, and AstraZeneca vaccines, it would have had to run the risk and order them over the summer and fall of 2020, not now.

The EU must now embrace, in true Hippocratic form, a commitment to do no further harm. The continent must refrain from embracing vaccine nationalism and barriers to trade in vaccines and components. Yes, Europe must insist that pharmaceutical companies honor their existing contracts with the Commission and scramble to generate more vaccine supplies over the course of the coming months. If the AstraZeneca and also the Johnson & Johnson vaccines are approved for use in the EU in coming weeks, vaccine supplies should be drastically improved in the second quarter of 2021.

But above all, EU governments must focus on fully using the vaccines they already have available to protect vulnerable Europeans. There is no excuse not to adopt far more ambitious rollout strategies. The gains from vaccinating the entire population of Europeans over the age of 16 by the end of June far outweigh any plausible economic costs—and this goal is still achievable. (Indeed, Denmark has maintained it, despite recent vaccine supply setbacks.) For a rich group of countries like the EU, this is a priority no one can afford to ignore.

Jacob Funk Kirkegaard is a senior fellow at the German Marshall Fund of the United States and the Peterson Institute for International Economics.

The world’s pharmacy is looking to inoculations to build friendly ties around the world—and compete with China.