Biden and Pope Francis Could Make a Climate Change Miracle

How the new U.S. leader and the liberal pontiff—like presidents and popes before them—can cooperate to transform American politics. 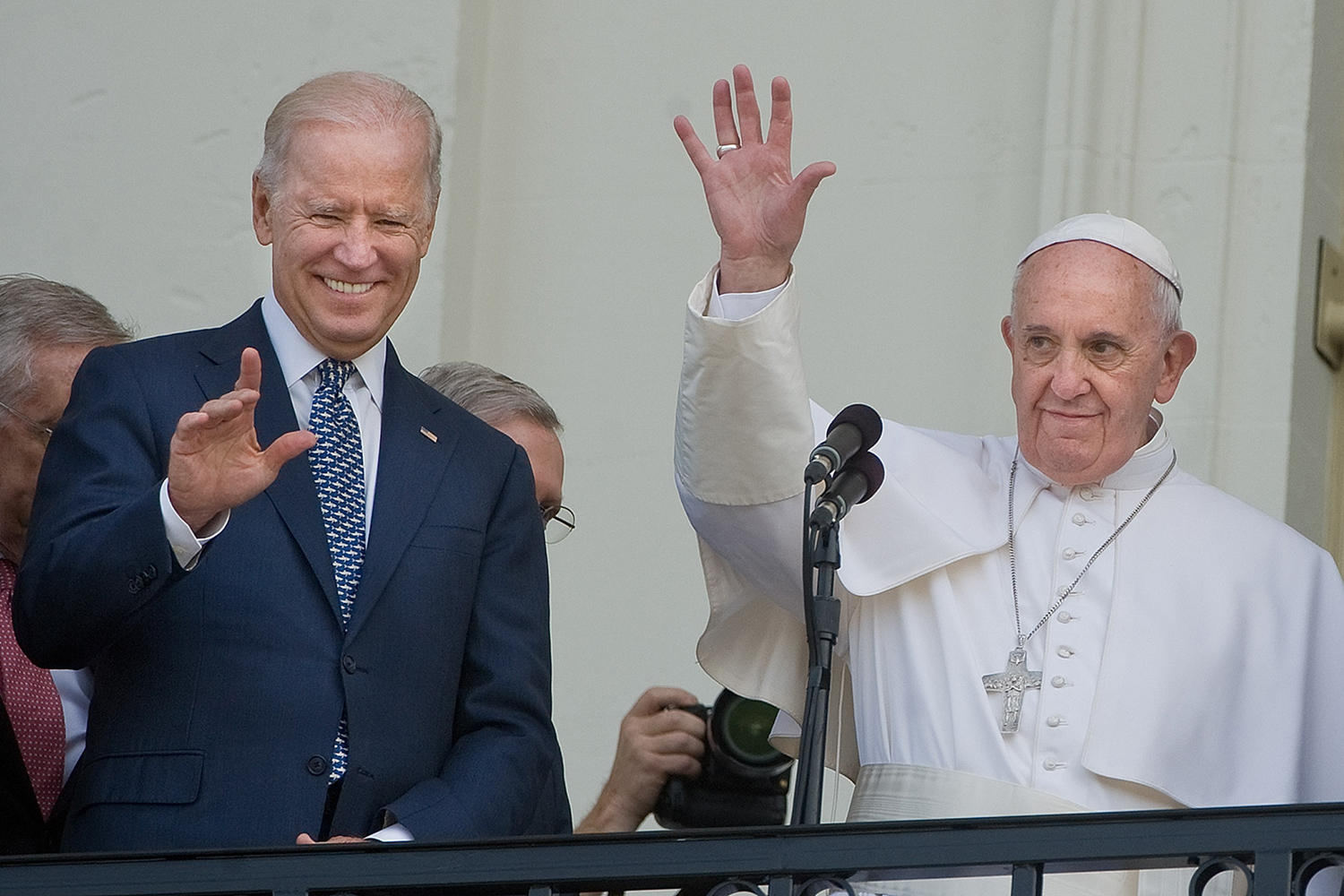 America now has its second Catholic president. It took 60 years and, in some ways, the two eras could hardly be more different for American Catholics. In 1960, John F. Kennedy worried that many American Protestants would not vote for him because he was a Catholic. In 2020, Joe Biden had more reason to be concerned that it would be his fellow Catholics that would refuse to vote for him.

But there is a key similarity. President Biden comes into office uniquely positioned to work productively with a powerful ally in the Vatican on an issue that a week into his presidency he has already described to the American people as “an existential threat:” climate change. Sixty years ago, when nuclear annihilation posed the greatest threat to humanity, a like-minded pope helped Kennedy to broaden domestic public support for a change in Washington’s posture in the Cold War, preparing Catholic opinion in particular for a shift in the rhetoric towards Moscow. There may be some lessons for the incoming Biden-Harris administration as it grapples with the fact that 74 million Americans voted for a climate-change denier.

It took Kennedy two years to risk identifying himself with any initiatives from Pope John XXIII. Initially, Kennedy felt he had to keep the Vatican at arms’ length. Anti-Catholic bigotry had not prevented his election but it had suppressed the Democratic vote in some parts of the country. The Vatican was equally sensitive. Days after his inauguration, the Holy See took the unusual step of making clear in a public statement that the president would not be expected to kneel in any future audience with the pope.

Although Kennedy never fully lost his wariness about seeming too close to Rome, he wasn’t naive about the potential benefits of papal support in a world staring nuclear annihilation in the face. The Kennedy White House had a hand in shaping the pope’s call for peace during the Cuban missile crisis. And after that 13-day dance on the precipice of nuclear war, both Kennedy and John XXIII—an elderly man whose pontificate had begun in 1958, three years before the dynamic young JFK took his oath—wanted to change the global conversation about peace and soften Soviet resistance to a détente.

As John XXIII was dying with cancer in 1963, the Vatican initiated a back-channel effort, led by Jewish-American journalist and peace activist Norman Cousins and blessed by Kennedy, to move Washington and the Kremlin closer to achieving the first nuclear arms-control agreement. The Pope’s most important contribution was Pacem in Terris, or “Peace on Earth,” a papal encyclical calling for a new approach to peacemaking, one that relied not on weapons but on words and the power of negotiation.

The New York Times published the letter in its entirety in April 1963, marking a first for the paper, and for the Vatican it marked a course correction. No longer would papal enyclicals be directed to Catholics alone, but, in John XXIII’s phrase, to “all people of goodwill,” words that proved very helpful to Kennedy, who knew that among America’s most hardened anti-Communists were his fellow congregants. The Vatican had made a point of sending the Kennedy White House the final proofs of the encyclical days before it was officially published. 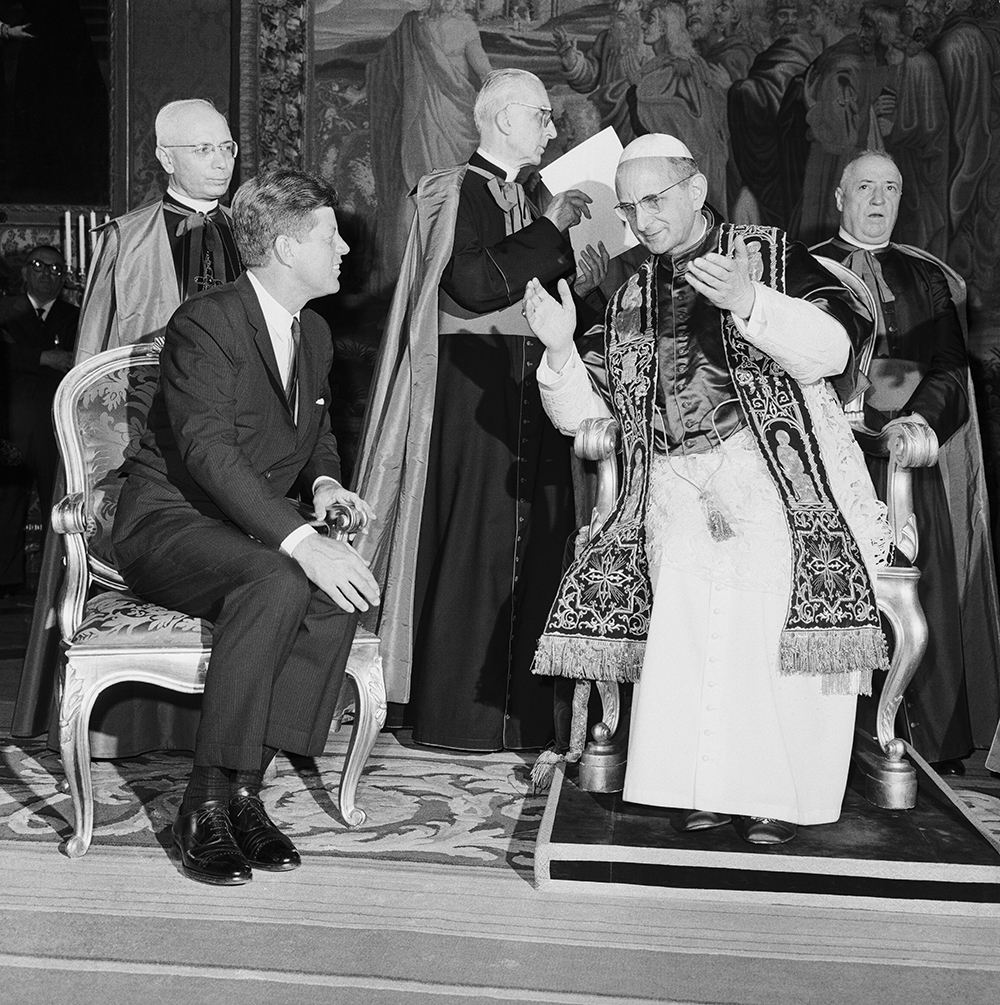 Highlighting the papal message in a speech at Boston College a week after its publication, Kennedy said “that document surely shows that on the basis of one great faith and its tradition there can be developed counsel on public affairs that is of value to all men and women of goodwill. As a Catholic I am proud of it, as an American I have learned from it.”

With the Vatican having gone first, it was politically easier for Kennedy to issue his own extended statement on seeking peace in the Cold War, resulting in his June 1963 American University speech, which helped pave the way to the Partial Nuclear Test Ban Treaty with Moscow later that summer.

The pope wasn’t the only religious leader who played an important role in encouraging Americans to support relaxing tensions with Moscow. But the Vatican’s highly visible use of soft power to reduce nuclear danger helped shift attitudes at the height of the Cold War. Now five decades later there is an opportunity for a pope and a president to work together on a different issue that threatens the future of humanity.

A pope dedicated to human rights has said nothing on China, thanks to a secret deal with Beijing.

In the United States, some Christian leaders have politicized the issue of climate change, pitting science against faith. Not the Vatican. The condemnation of Galileo was 400 years ago, and Rome insists that the faithful not see any tension between their faith and climate science—or between their faith and their public responsibility as citizens. Pope Francis’s 2015 encyclical, Laudato si’, like Pacem in Terris, was an urgent appeal for a new dialogue on “how we are shaping the future of our planet.” In this case it is the proliferation of fossil fuels and not nuclear weapons that is the cause of the urgency.

Francis’s encyclical was strategically timed to influence the Paris Climate Agreement, which was later abandoned by the Trump administration. In his new book, Let Us Dream: The Path to a Better Future, Francis recalls how after being elected pope, he assembled the world’s best scientists and asked them to provide a summary of the “state of our planet.” He then asked theologians and scientists to work together on the document, to serve as a blueprint to galvanize people toward engaging on climate concerns. When the pope was traveling to Strasbourg in 2014 to address the Council of Europe, then French President François Hollande’s environmental minister urged the pope to complete the letter and release it before representatives of the world gathered in Paris for what would become the climate accords, in order to help solidify support for the agreement.

With the Biden administration’s decision to rejoin the Paris initiative, the challenge now, as in 1963, is to convince more of the American public to shed their superstitions and tribal blinders and embrace the complex reality of an existential threat to the planet. The pope, who has tried to appeal to all people of goodwill to tackle the threats to the environment, can be of great help to Biden in persuading people of faith that there are no liturgical and theological roadblocks to combating global warming, just as there were none to seeking to reduce the danger of nuclear war with an atheistic Communist state. 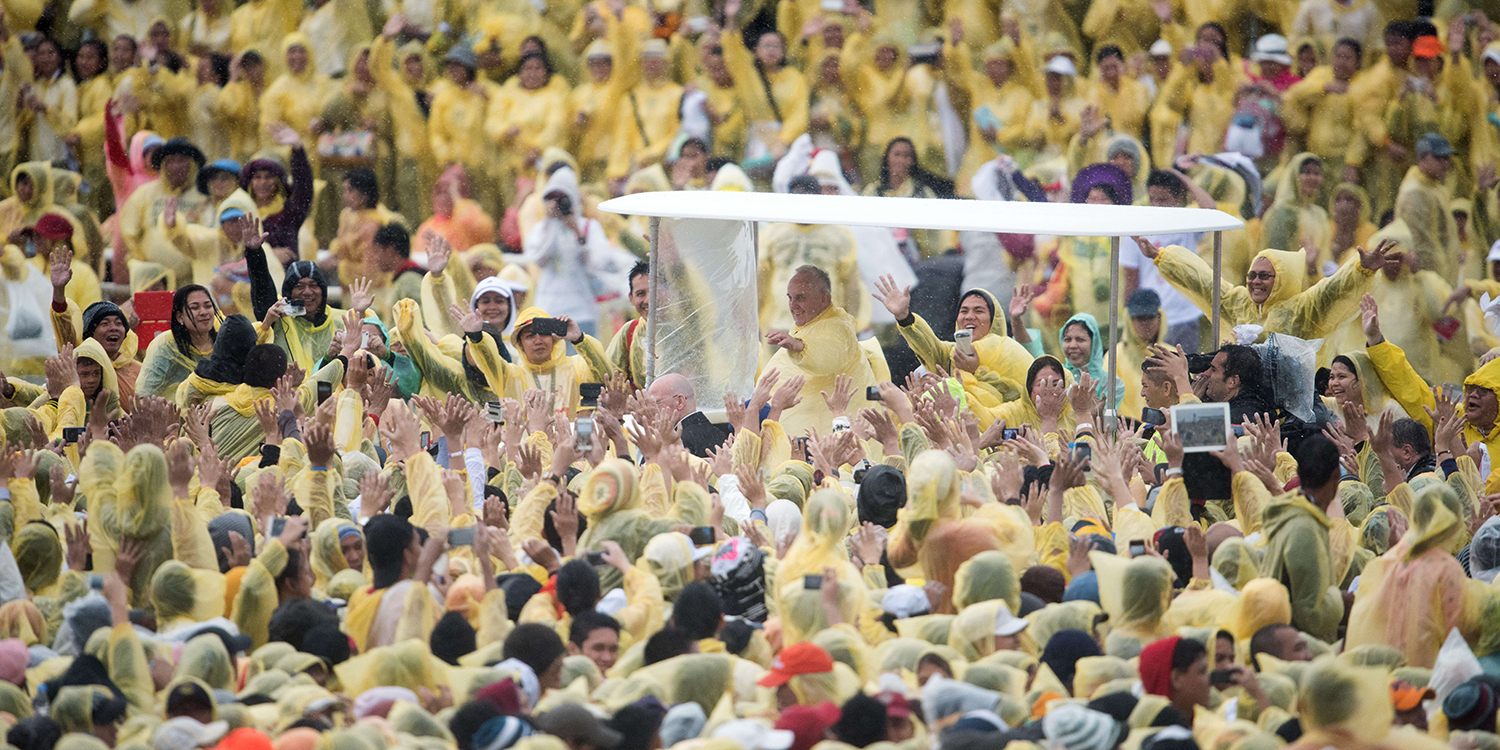 Pope Francis wears a plastic poncho as he waves to well-wishers after a Mass in Tacloban on Jan. 17, 2015. The pope spent an emotional day in the Philippines with survivors of a catastrophic super-typhoon that claimed thousands of lives, highlighting his concern over climate change. JOHANNES EISELE/AFP via Getty Images

Like Kennedy and John XXIII, a half century ago, the current pope and president will need to speak over the leadership of the American church directly to American Catholics on the existential issue of their generation. Just as John XXIII’s Pacem in Terris contradicted years of hard-line Cold War statements by prominent American Catholic leaders such as former Senator Joseph McCarthy’s ally Francis Cardinal Spellman, Pope Francis’ bishops in the United States aren’t fully in unison with him or the man who is now the nation’s most prominent Catholic in recognizing the existential threat of climate change. Just minutes after Biden took office, the head of the U.S. bishops’ conference, Archbishop José Gomez of Los Angeles, issued a letter to the new president saying he hoped they could work together on certain issues, but that abortion remains their “pre-eminent priority.” Gomez’s approach to climate change is not an aberration among the hierarchy. In 2019, his predecessor, Cardinal Daniel DiNardo said that combating global warming was important, but “not urgent.” In the same vein, Eternal Word Television Network, the world’s largest Catholic news network released a voting guide ahead of the 2020 election labeling environmental concerns a “negotiable policy issue” for Catholics. But Catholic laity are ready for a new message. Whereas only 57 percent of white evangelical protestants say they are concerned about the environment, according to polling from Yale University and George Mason University, 77 percent of white Catholics were worried about climate change.

Because of the anti-Catholic bigotry of his times, Kennedy had to receive help indirectly. Biden can embrace it openly. In fact, he already has. When the pope called Biden to congratulate him on his election win, among the chief issues they pledged to work on together was environmental action. Biden’s choice for special climate envoy, fellow Catholic and former Secretary of State John Kerry, recognizes the remarkable opportunity presented by Francis’s Vatican to soften the political divide on environmentalism. In 2015, as he was negotiating the Paris Climate Agreement, Kerry praised the global importance of Laudato si’ and, after Biden tapped him for his new post, Kerry said the nation’s 46th president “will trust in God and he will also trust in science to guide our work on Earth to protect God’s creation.” When then Vice President-elect Kamala Harris introduced the Biden administration’s climate team last month, she specifically quoted the encyclical, citing the pontiff’s words: “Humanity still has the ability to work together in building our common home.”

In the same way that Laudato si’ proved to be an effective tool of soft power in helping Hollande and other heads of state embrace the Paris Climate Agreement, Francis can prove useful to Biden both in terms of his powerful evocation of environmental concerns, but also through practical leadership on the ground. Francis’s point man in the U.S. capital, Archbishop Wilton Gregory—whom he just elevated to be a cardinal in November, making him one of the pope’s principal collaborators—is among the top leaders of the U.S. bishops when it comes to environmental concerns. In his previous post in Atlanta, Gregory mandated climate education in Catholic schools and an energy audit of the church’s schools, churches, and other institutions. Now, in the nation’s capital, he is well positioned to do the same. During an interview with television host and political commentator Stephen Colbert in December, Biden revealed that Gregory had recently called him and said he looked forward to partnering with him. Biden would be well advised to take him up on that offer. Through a strategic partnership with the Biden administration, as one of the largest landowners in the world, Catholic institutions could pave the way in setting new standards for environmental stewardship. Finally, during this week’s signing of executive orders relating to the threat of climate change, Biden announced that he had directed the Department of Justice to establish an office of climate justice. Including a faith outreach team as a part of that office could prove to be a pivotal partnership for bringing about the environmental justice that both the president and the pope say that are committed to achieving.

Like Kennedy and John XXIII, Biden and Francis share a similar posture on the most important issue facing humanity. In different ways—spiritually and politically—both men will be seeking converts in bridging the divide between faith and science. Biden and Pope Francis are in their seventies and eighties respectively, and while both are at the top of their respective hierarchies, they have a relatively brief window of opportunity, which like an earlier pope-president combination could fundamentally change the world.

Christopher White is a national correspondent for the National Catholic Reporter.