Foreign-Policy Pragmatism Is Back. So Are Its Flaws.

A new book by a Biden administration official puts a spotlight on the wisdom—and limits—of diplomatic competence.

In the fall of 1949, during the early days of McCarthyism, Dwight D. Eisenhower rejected the emerging partisan extremes in American politics: “The frightened, the defeated, the coward, and the knave run to the flanks, straggling out of the battle under the cover of slogans, false formulas, and appeals to passion—a welcome sight to an alert enemy.”

Then-president of Columbia University, Eisenhower called for his audience of lawyers at the American Bar Association to pursue “progress down the center,” balancing anti-communism and the defense of individual freedoms with the need for global partnerships and investments in economic development. Criticizing both the hawks and the doves in the early Cold War, Eisenhower advocated a careful balance between force and diplomacy, what he called “the truly creative area in which we may obtain agreement for constructive social action compatible with basic American principles.” 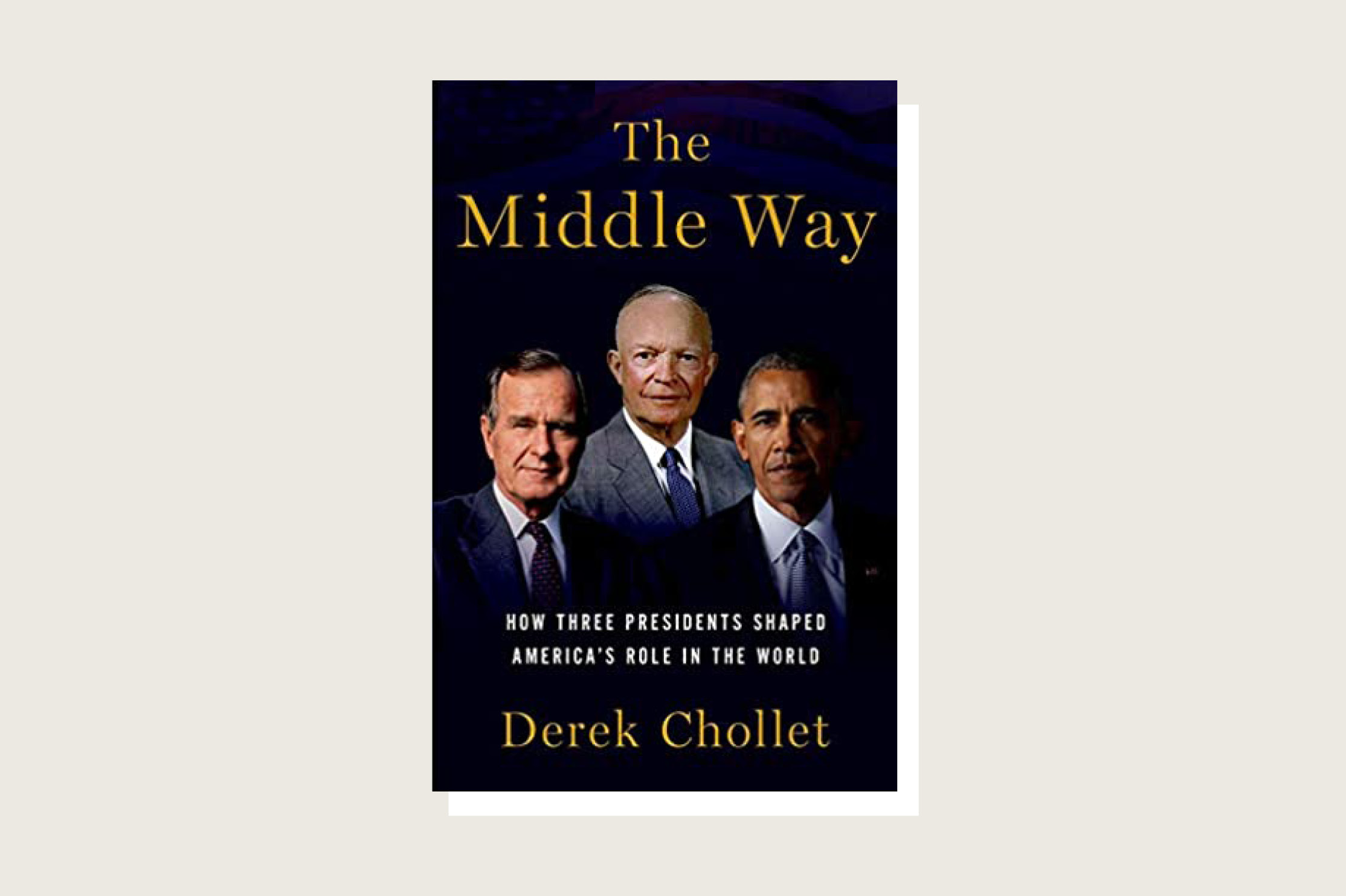 Eisenhower admitted that his approach to policy sounded “wishy-washy,” especially in contrast to the full-throated calls for “liberating” communist societies on the right and the idealistic demands for “disarmament” and “world peace” on the left. The Republican Party, in fact, was still dominated by isolationist sentiment, represented by Ohio Sen. Robert Taft, the party’s presumptive candidate for president in 1952. Eisenhower, of course, used his war record to steal the Republican nomination and the presidency from Taft.

Despite his personal popularity, Eisenhower’s foreign policies were consistently criticized from all directions for their mixed results. Scholars echoed the president’s detractors, depicting his administration as, alternatively, too passive and too militarized. In the last two decades, however, Eisenhower’s reputation has made a comeback among scholars and practitioners critical of the subsequent excesses of U.S. foreign policy in Vietnam and, more recently, Iraq.

Derek Chollet is the most prominent official from the Obama and Biden administrations to take Eisenhower as an explicit model. (He was assistant secretary of defense for international security affairs from 2012 to 2015 and is currently the counselor of the U.S. State Department.) Chollet’s compelling new book, The Middle Way, draws a clear line of policy continuity from Eisenhower to Barack Obama. George H.W. Bush’s single term in the White House serves as a way station of sorts, transferring the wisdom of the World War II generation to the young, quick-learning senator from Illinois.

Writing for our current era of “extreme polarization and geopolitical upheaval,” Chollet analyzes how Eisenhower, Bush, and Obama organized their policies around three overriding characteristics: decency, bipartisanship, and pragmatic problem-solving. He admits that many of their initiatives failed, and their centrism might have increased partisanship, but they each avoided the disasters that were common to their successors. Chollet’s presidential troika displayed consistent humility, intelligence, and discipline. They escaped the traps of unilateralism and overextension, as they acted forcefully when necessary and expanded the uses of U.S. power abroad through multilateral mechanisms.

Chollet’s coverage of Eisenhower is particularly strong, drawing on a close reading of historical literature and original documents. The retired general’s wisdom is most evident in the repeated crises of his years in the White House. From the Battle of Dien Bien Phu in 1954 to Suez and Hungary in 1956, Chollet recounts how Eisenhower simultaneously showed strength to communist adversaries, worked closely with foreign allies, and promoted compromises that protected core U.S. interests, short of war.

After the French defeat at Dien Bien Phu, Eisenhower rejected calls for direct military intervention, but he invested in supporting anti-communist forces against what he perceived as “falling dominos.” In Suez and Hungary, he pulled his allies back from the brink of wider conflict, deterred Soviet aggression, and increased U.S. covert and public activities. At the time, critics contended that the president failed to roll back Soviet power, but he effectively pursued the containment of communist influences at reasonable costs. Although that was far short of victory, it set up the United States for long-term advantage—a theme of Chollet’s previous book The Long Game.

Bush began his political career as a supporter of Eisenhower. He managed the end of the Cold War and the first Gulf War as the former president would have. Bush trusted the Soviet reformer Mikhail Gorbachev, but he was cautious and deliberate. He worked closely with a wide variety of allies, and in the case of the Gulf War, he converted some former adversaries (especially Syria) into temporary partners. Bush carefully avoided overextension, refraining from pushing Gorbachev too hard or occupying Saddam Hussein’s Iraq. The president allowed actions to take shape on the ground, and he reacted with a disciplined role for U.S. interests—supporting German-led efforts to unify their divided nation and helping the international community (through the United Nations) to curtail Iraq’s power. In the latter case, Saddam defied Bush’s expectations of his overthrow, but he became more of a nuisance than a strategic threat to the United States.

Chollet had a front-row seat to observe how Obama learned from this history. Obama shared Eisenhower and Bush’s belief in the exceptional role of the United States around the world, and he echoed their warning of the limits of American power. Washington was at its best when it was cautious, deliberate, and focused on incremental progress. Obama withdrew from overextended commitments in Iraq, he pursued nuclear arms control negotiations with Iran, and he sought to encourage Russian and Chinese cooperation while punishing their aggressive behavior. Chollet defends the president’s hesitance (and inconsistency) in Syria, where he ultimately realized that limited U.S. military intervention could not end Bashar al-Assad’s crimes.

The next U.S. president doesn’t belong to a single school of thought—and that’s a good thing.

Syria, of course, shows the shortcomings of this cautious pragmatism. There and in Libya, the president promised to improve conditions on the ground, but the tentative U.S. commitments allowed civil war and genocide to fester. Obama’s rhetoric might have triggered the spread of more violence, as happened in Hungary in 1956 and Iraq in 1991—occasions when Eisenhower and Bush also encouraged suffering people to rise up but then failed to intervene more fully. Even if the United States was not weak in its aims and actions, perceptions of American hesitance likely encouraged aggression by Russia and regional tyrants during later months and years.

The Middle Way highlights the flexibility and risk aversion of cautious policymaking, but it discounts the costs to American ambitions. As Eisenhower’s critics noted, holding the line in a dangerous world gave first-mover advantages to the enemy, as Mao Zedong’s regime proved in Korea, Tibet, and Quemoy and Matsu during the 1950s. Bush’s detractors lambasted him for failing to articulate a persuasive vision after the Cold War, which left the United States and its allies poorly prepared when countries such as Yugoslavia disintegrated into civil war and ethnic cleansing less than 50 years after the Holocaust.

Chollet explains that his troika of presidents possessed a strong sense of American priorities, the fortitude to disengage from counterproductive commitments, and the wisdom to hedge when necessary. They were prudent leaders. But did they advance U.S. interests? Were stability and avoiding big mistakes enough?

Bush has the strongest case, having managed the disintegration of the Soviet threat, as Chollet recounts very well. Both Eisenhower’s and Obama’s presidencies, however, witnessed the expansion of Russian and Chinese power in East Asia, the Middle East, and Africa. Rogue governments grew more assertive during the Eisenhower and Obama administrations, including Cuba in late 1950s and North Korea after 2009. Chollet acknowledges that although these presidents remained personally popular, domestic dissatisfaction with their foreign policies fueled more belligerent, and very partisan, presidential candidates.

The Middle Way offers powerful historical lessons about the importance of pragmatism in U.S. foreign policy, especially during moments of domestic and international turbulence. Chollet will surely apply these valuable insights to President Joe Biden’s emerging strategy. Pragmatism begins, of course, with competence. The United States must train, promote, and empower the best diplomats to represent the nation abroad. Washington must also cooperate effectively with international organizations, such as NATO and the World Health Organization, that promote many shared interests.

Sticking to the middle, however, is not enough. For Americans and many others to benefit from the enormous resources invested by the United States in foreign policy, we must make significant progress on the most critical issues. Transformation, on a modest scale, is a necessary pursuit, especially for a powerful and vulnerable nation. Reducing the proliferation of deadly weapons, a trend that Eisenhower and Obama both failed to reverse, is essential for America’s long-term security. Curtailing the spread of disease and addressing climate change are two additional strategic imperatives, among many others, and they require decisive action more than incremental efforts.

The Middle Way offers a model for where to start. It elucidates the deliberative temperament that can help leaders to navigate a complex mix of challenges and pressures. Intelligent, cautious, and balanced policies will make good use of U.S. resources. Rebuilding consensus on what America is about, and how it hopes to improve the world, will require stronger statements of purpose and some risk-taking. That is where leaders must depart, selectively, from the middle.

As Eisenhower, Bush, and Obama learned, the alternative to partisanship requires more than “progress down the center.” Effective strategy demands moving citizens to accept a new reality. Passions are dangerous, but they are unavoidable fuel for foreign-policy transformation. Biden will need to channel pragmatism and passion if he hopes to retore America’s international leadership.

Jeremi Suri holds the Mack Brown Distinguished Chair for Leadership in Global Affairs at the University of Texas at Austin. He is a professor in the University's Department of History and the Lyndon B. Johnson School of Public Affairs.
Tags: Joe Biden, Review, U.S. Foreign Policy

The next U.S. president doesn’t belong to a single school of thought—and that’s a good thing.

Myanmar Protesters Return to Streets After Bloodiest Day Since Coup