How Argentina helped open the region for the Russian vaccine.

This week, we take a look at Argentina’s vaccine diplomacy, Haiti’s political impasse, and Bolsonaro’s tightened grip on Brazil’s Congress.

This week, we take a look at Argentina’s vaccine diplomacy, Haiti’s political impasse, and Bolsonaro’s tightened grip on Brazil’s Congress.

The Russian Sputnik V vaccine has been found to have a 91.6 percent efficacy, according to peer-reviewed findings released on Tuesday. The announcement was met with special excitement in Latin America, where several governments have negotiated multimillion-dose purchases of the shot.

Although Latin American countries are among the world’s hardest-hit by COVID-19, many lag behind wealthier nations in securing vaccines. Their early purchases of Sputnik V—as of Thursday, they account for six of the 17 nations outside of Russia where the shot is approved—are due in large part to a diplomatic push by the Argentine government, El País reports. Amid plenty of public skepticism, Buenos Aires sent missions to Moscow in October and December 2020 to inspect data from the vaccine’s phase 3 trial.

An Argentine presidential aide said the delegation had translated hundreds of pages of information about the vaccine into Spanish—necessary for approval—which it later shared with other governments in the region, including Bolivia, Peru, Mexico, Uruguay, and Chile.

This is how, a day before the phase 3 results were published, trucks of Sputnik V shots were already trundling through Bolivia’s countryside. A photo of a delivery in a poultry truck draped in a Bolivian flag—a creative (and health department-approved) solution for cold storage requirements—went viral. Argentina began vaccinating with Sputnik this past December, meanwhile, and Mexico announced the purchase of 24 million Sputnik doses on Jan. 25.

The Russian vaccine drew plenty of controversy before the Tuesday publication of phase 3 data. One Argentine opposition politician called the shots “a big scam” and accused President Alberto Fernández of “poisoning” the population. Mexican lawmakers, too, hurled doubt and criticism. Still-substantial anti-vaccine sentiment in Latin America is unlikely to be totally shaken by the trial results finally being published.

Even so, through Argentina’s bet on Russia, the hard-hit region has inched forward in the marathon toward vaccine coverage. Buenos Aires’s vaccine diplomacy also stands as a rare example of Latin American cooperation during the pandemic, although Brazil, traditionally a regional anchor, had no part in it.

Brazil’s new congressional captains. Allies of Brazilian President Jair Bolsonaro won elections for speaker of both houses of Congress. Under the outgoing speaker, the lower house had checked Bolsonaro’s more radical plans in the first two years of his presidency. The country’s opposition is fractured, and Bolsonaro, as a political tactic, has drawn close to a powerful group of conservative lawmakers he previously denounced for their links to corruption. 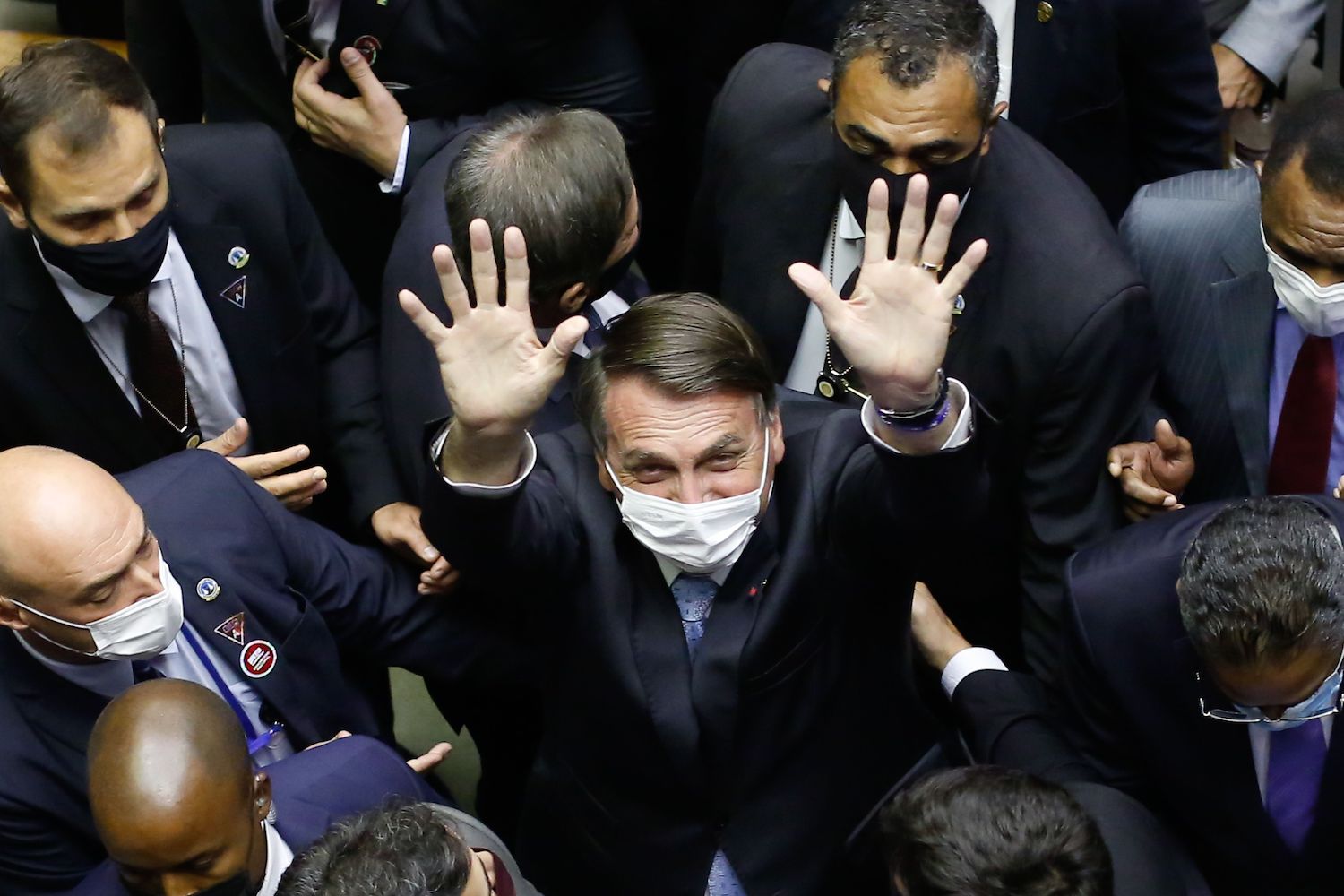 Brazilian President Jair Bolsonaro waves as he leaves the National Congress after a plenary session of the Chamber of Deputies, in Brasília, Brazil, on Feb. 3.Sergio Lima/AFP/Getty Images

Is contact worth it? For the first time, Chile and the Dominican Republic participated in a ministerial meeting of the International Contact Group, a joint European-Latin American initiative that aims to resolve Venezuela’s political crisis. “More than ever, Venezuela needs the support of an international community that works together,” the group said. It has supported a mix of strategic engagement with President Nicolás Maduro’s government alongside sanctions in the past; a Biden administration official said this week that the United States does not expect to have dialogue with Maduro anytime soon.

Nubank soars. The privately held Brazilian fintech firm Nubank announced it has become the fifth-most-valuable financial institution in Latin America, passing traditional giants in the sector, such as Bank of Brazil. After the latest round of funding, it is reportedly valued at around $25 billion—more than twice as much as in 2019—and plans to focus the new cash on expansions in Colombia and Mexico.

Arrests in Tamaulipas. Authorities in the Mexican state of Tamaulipas, which borders south Texas, detained 12 police officers on homicide charges after a massacre of 19 people last month. At least 13 of the victims appear to have been northbound Guatemalan migrants; their bodies were found charred beyond recognition. Mexico’s interior minister denounced what she said was a wide pattern of migrant abuse by security forces.

A new top U.S. diplomat on Latin America. Brian Nichols, a former U.S. ambassador to Peru and current ambassador to Zimbabwe, will be nominated as assistant secretary of state for Western Hemisphere affairs, The Associated Press reported. He would be the first Black diplomat to hold the position in more than 40 years. Nichols has also served in Colombia, El Salvador, and Mexico, and he made headlines last June for speaking out against the police killing of George Floyd. 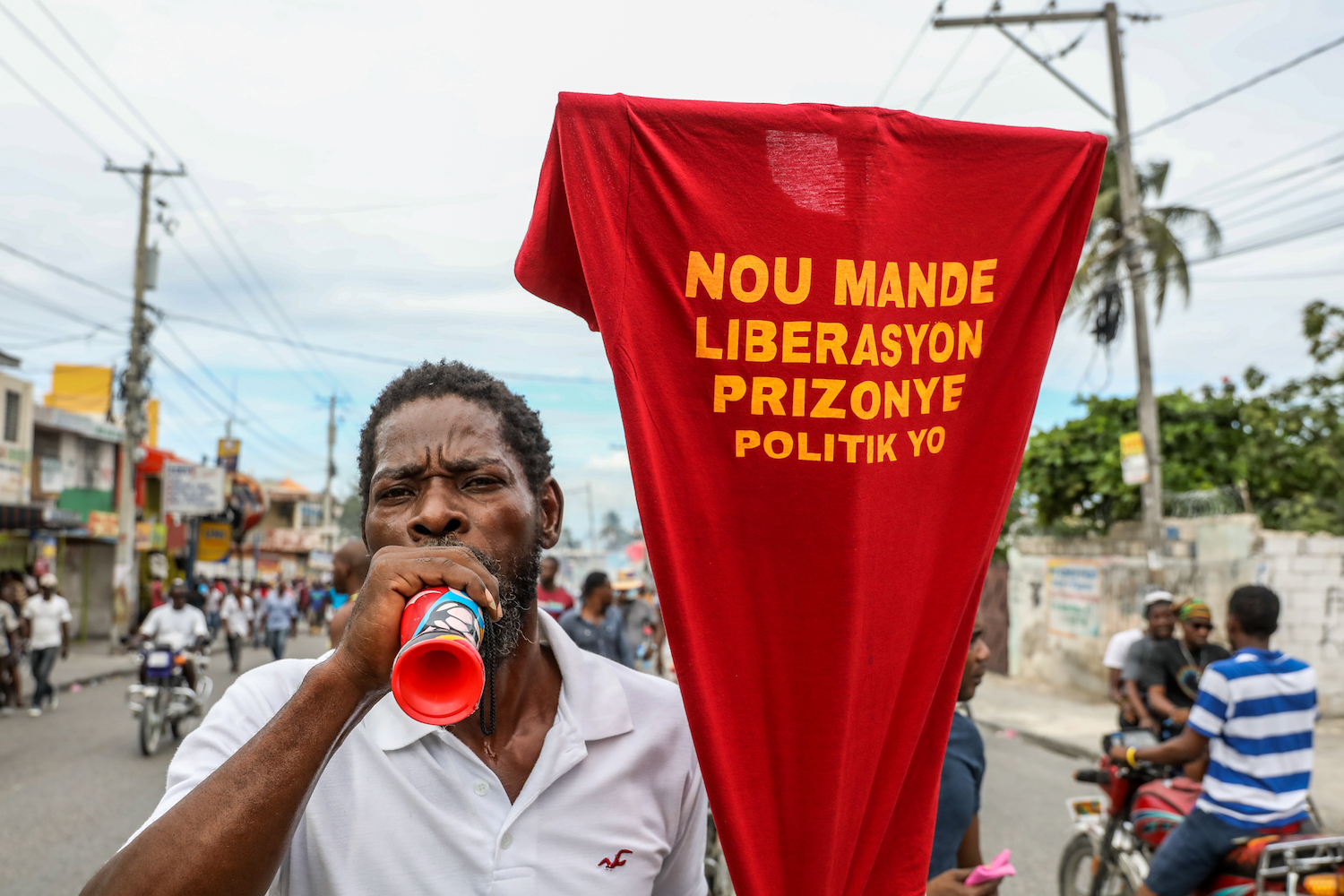 Opposition protesters call for the departure of President Jovenel Moïse as they march through the streets of Port-au-Prince, Haiti, on Nov. 18, 2020.Valerie Baeriswyl/AFP/Getty Images

Stores were shuttered and protests unfolded in Haiti’s capital this week as the country’s opposition staged a general strike calling for President Jovenel Moïse to step down. They argue that his term ends Sunday and a transitional government should step in; Moise says his term lasts until 2022.

On Tuesday, Catholic bishops called for dialogue and offered to mediate the crisis, writing in a statement from a bishop’s conference that “the country is on the verge of explosion.”

Moïse was elected in late 2016 after a yearlong standoff over a previous election. Less than 10 percent of registered voters supported him at the time, and his administration has faced large, on-and-off street demonstrations since mid-2018. These denounced fuel prices, alleged corruption, political repression, and economic strife.

A year ago, Moïse dismissed most of Haiti’s congress and began ruling by decree. For now, Moïse says he will stay put, in which case the protesters say they will stay in the streets. While the United States, the Organization of American States, and the European Union have called for elections to restore the legislature, in the coming months, Moïse’s plans focus on modifying the Constitution.

A Salvadoran Oscar hopeful. Despite the fact that Mara Salvatrucha (MS-13) and Barrio 18 gang members often execute those among their ranks who are found to be queer, a small group of gay former members have survived together in an isolation unit of El Salvador’s San Francisco Gotera prison. The documentary Unforgivable follows the relationship of two of them against the backdrop of a prison-based evangelical church.

The film is El Salvador’s first documentary to qualify for consideration for an Oscar nomination, due to the laurels it won at several international film festivals. It can be streamed worldwide (except in Spain and Australia) starting today through Feb. 8 at Vimeo On Demand. The director Barry Jenkins (Moonlight) is among those who praised the film, calling it a “a clear, humane and uncompromising window into the soul.”

NEW FOR SUBSCRIBERS: Want to read more on this topic or region? Click + to receive email alerts when new stories are published on Pandemics, South America

The response will indicate the future of the country’s fragile detente.